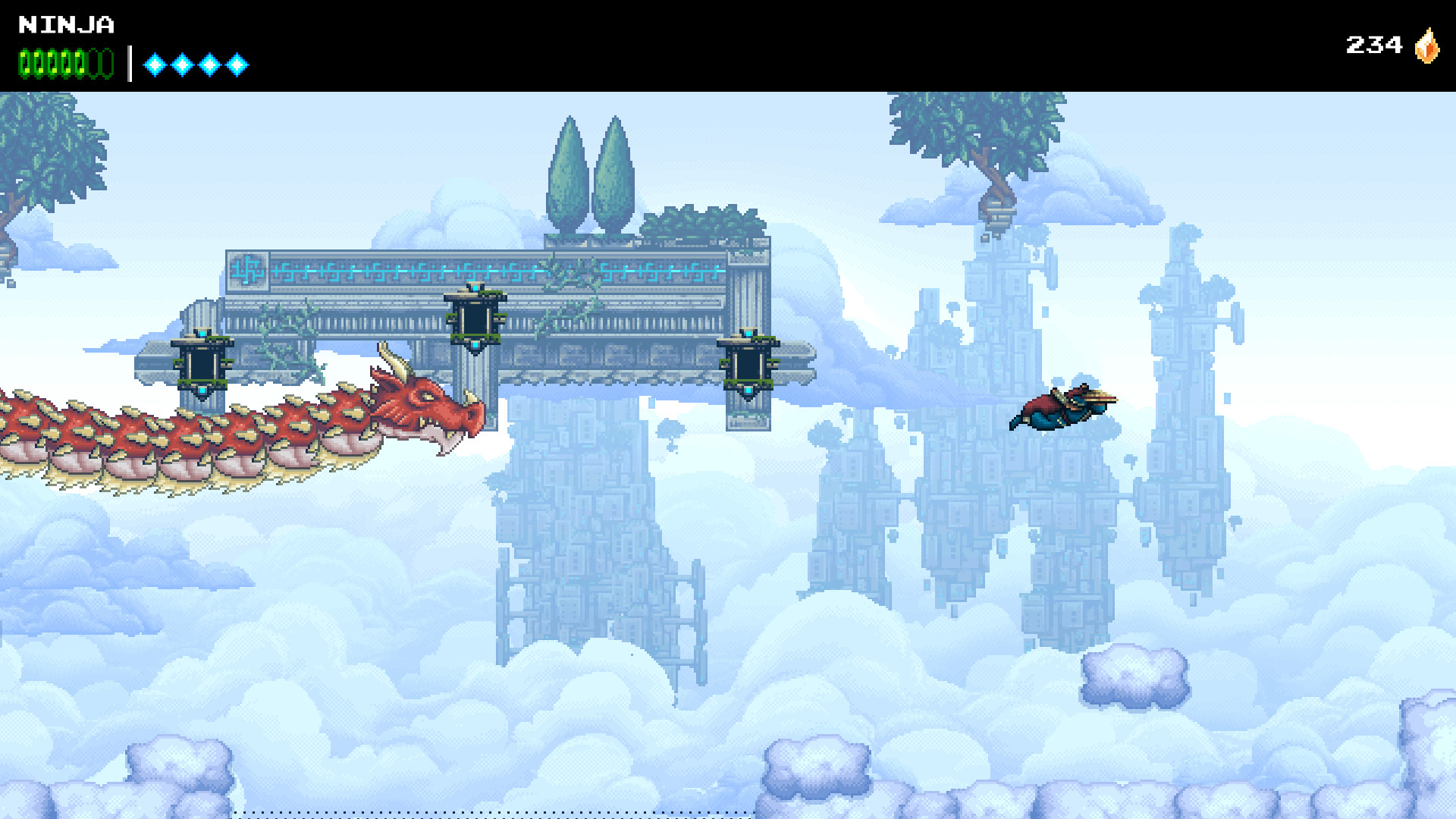 Update: The Writer has updated the review to reflect their thoughts on the Picnic Panic DLC

I think I've finally found the best game to come out of Devolver Digital. My experience with the publisher's output has seen some great games, but most of them didn't ever perfectly gel with me. There was always something missing from them. But along comes this curious retro-styled indie game, The Messenger. Inspired by titles such as Ninja Gaiden, Shinobi, and maybe even a bit of the comedic stylings of Monty Python, it's a game that mostly comes together. There may be a few rough spots, but ultimately are small nags to a terrific experience.

The Messenger plays as an action platformer, with your character having the ability to attack enemies, projectiles, or lanterns with their sword, allowing you to use the Cloudstep technique which can be activated quickly to allow you to double jump. This is a really nice way of allowing you get to some places in a platformer, since most games with a double jump are a 'one and done' deal that can't be repeated until you hit terra firma again. There's even an achievement for this if you can stay in the air for fifteen minutes. 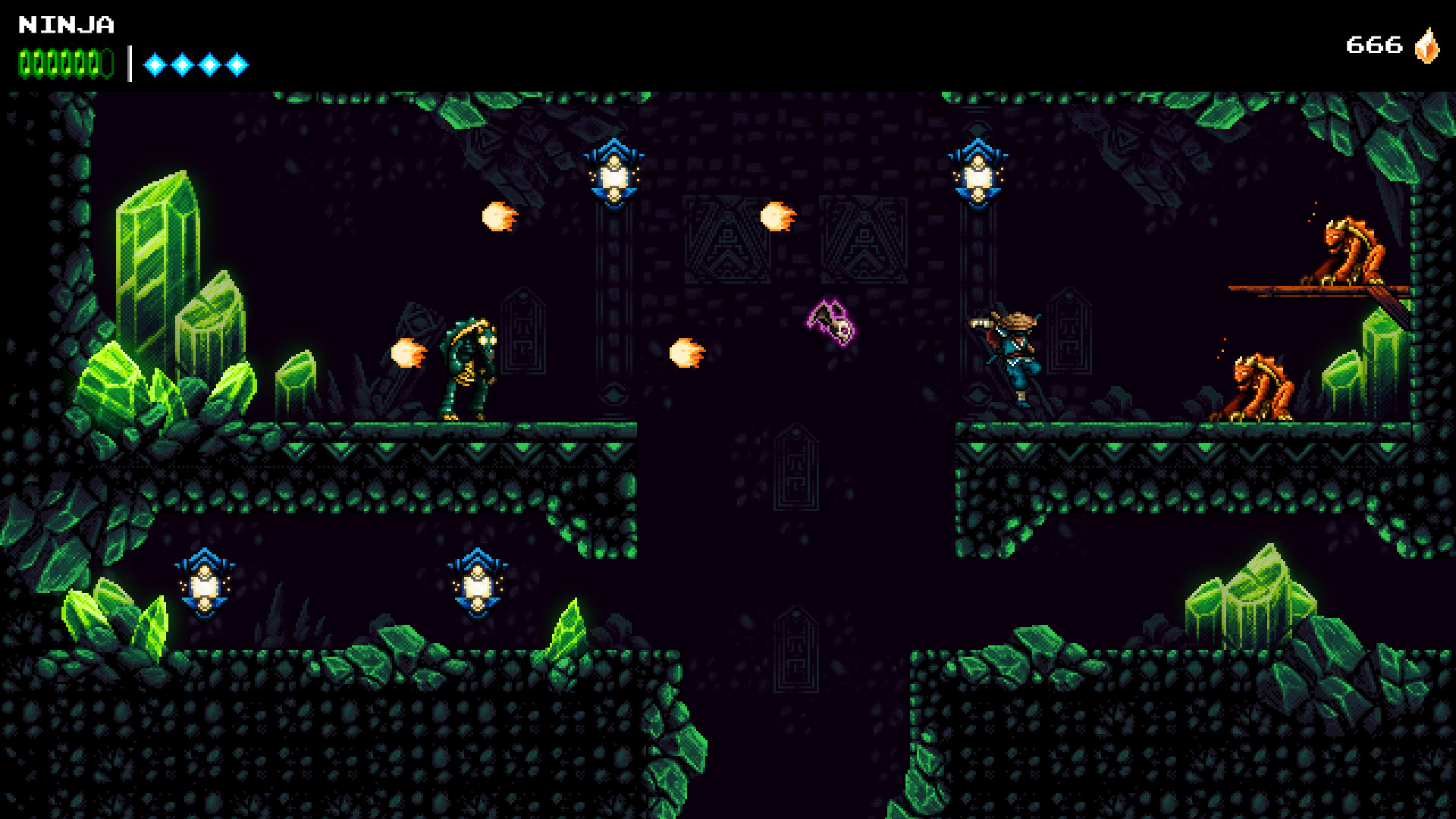 Along the way, you'll find new abilities that let you progress to other areas, including secret areas that have time stone or power token caches. Some of the abilities are gliding, a rope dart, and shoes that let you run on water. All like a classic ninja, right? The stones let you buy upgrades like the ability to slash downward while using the glider, or increasing your health or ki for your magic shuriken. The power tokens, on the other hand, unlock a pretty cool reward once you get them all.

If you wanted to find everything in The Messenger, the game will likely take you about 15 to 20 hours depending on how quick you are. The other gameplay element that shows up in the latter half of the game is that you switch from an 8-bit style to a 16-bit style, and make use of time warps to get to newer areas either in the past or future that are either opened or locked off, depending on which era you are in. 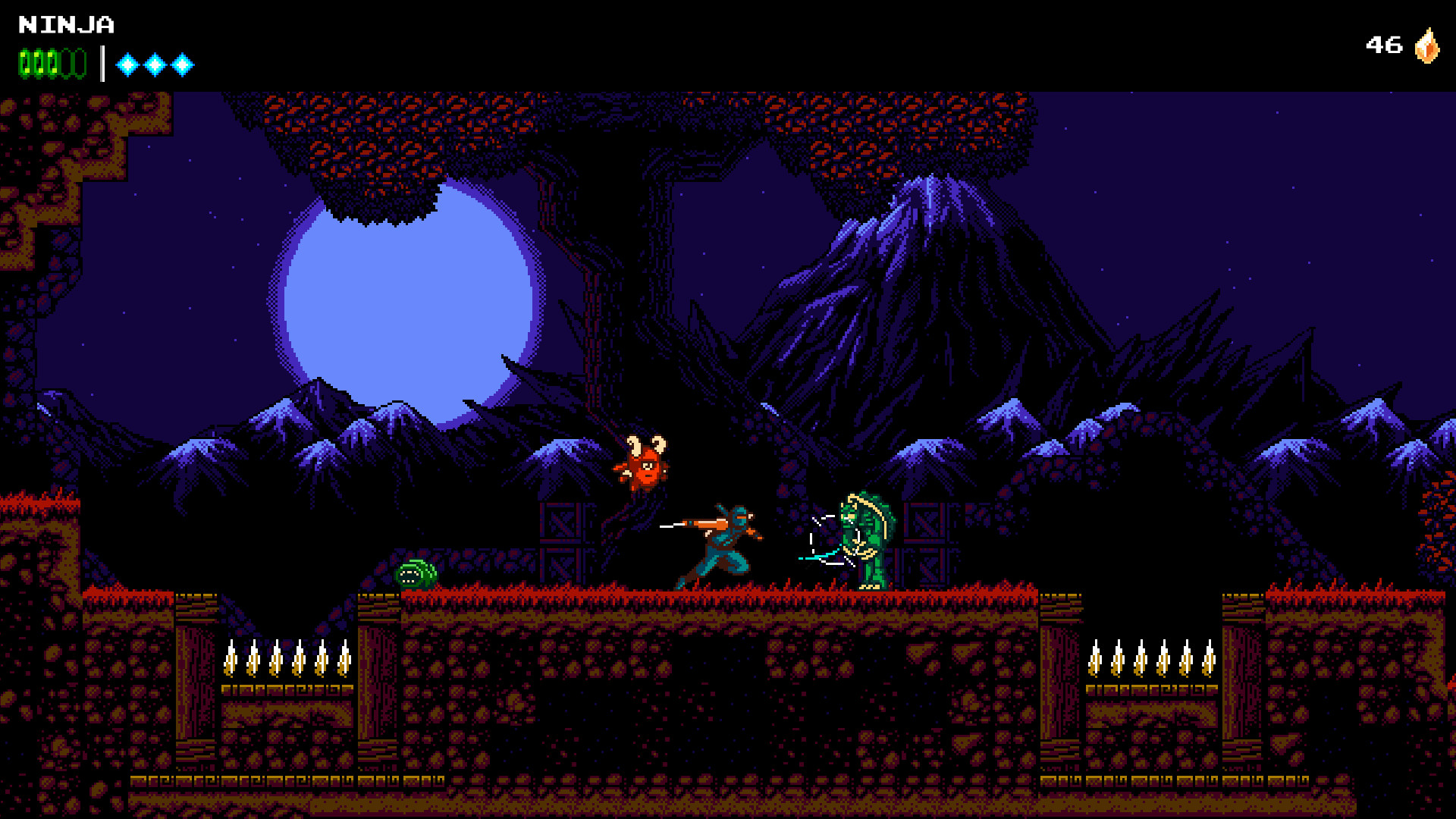 To add to this, the soundtracks for each style are different, with the 8-bit era uses NES styled chiptunes from a game company like Silver Surfer. The 16-bit era uses something that sounds like it came out of either the Genesis or Amiga. Both styles are great, although the NES chiptunes aren't exactly my thing. I'm more of a VRC6/Sunsoft fan, and more 16-bit chiptunes need to honestly be a total thing in retro games. (I'm actually somewhat tired of the 8-bit look and sound, since most games with a retro aesthetic seem to use 8-bit out of laziness, as if there weren't other times in gaming history to pull from.)

The Messenger is very good, and also very challenging, but the challenge level seems a bit uneven at times. At least when the going gets tough, it's never too tough. If you die, the only real penalty is that this little demon comes out and will steal any time stones you collect until some time passes. You can even reduce the time he sticks around with the right upgrade. 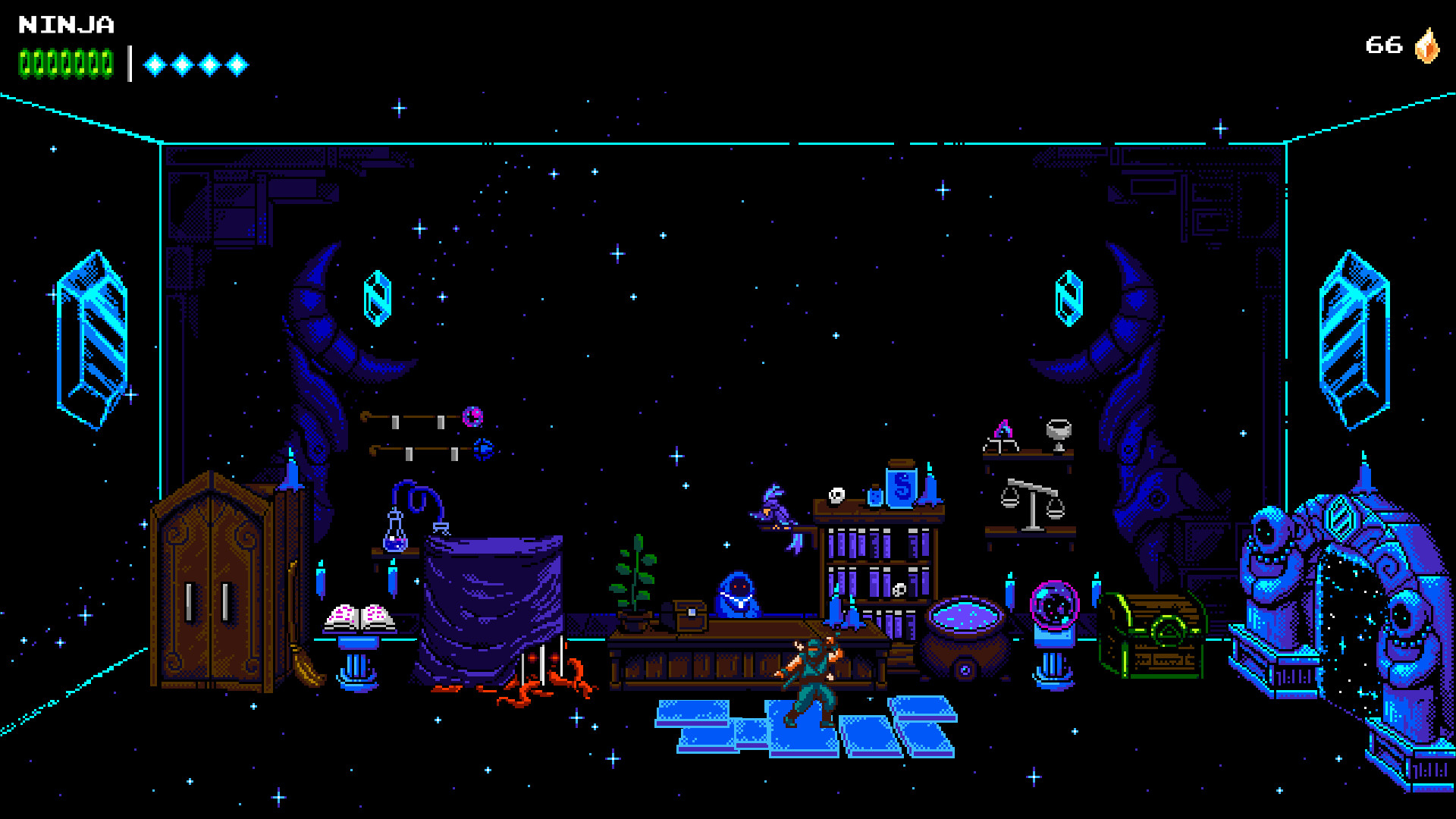 There are some areas of the game that could have benefited from some slightly cringey humor. It's not Guacemelee 2 bad, but it's there. The game also could have benefited from having a warp point to about halfway point of each of the levels. Instead, you are expected to go through some of the other areas to get to them. That's some bad design oversight that doesn't take the player's time into consideration. But all in all, The Messenger is a well polished platformer, and if you are a fan of ninjas or Ninja Gaiden, the game is highly recommended.

The DLC came out recently, and it's suitably hard, harder than the rest of the game if you ask me. The story is such that you have to rescue the little fuzzballs you met in the main game, in an alternate dimension. There are two remixed levels of the first stage and fourth stage, with a boss fight for each. The game actually starts off wit ha mini-game that callback to Battletoads. Another mini-game shows up in the final battle, and it is suitably amusing. Collecting all the new collectibles will give a double edge sword mode where you get significantly increased attack with the tradeoff being perm-death. If you die, you start the whole game over.  While the DLC isn't much since there's no new substantive story content, it's free. The only caveat to it is that you need to beat the main game to access it, even if you already beat the game, you'll need to do it again. Removing that requirement would have been nice. But that's the DLC. If it deserves a star rating it would get a 2.5.

The Good: The gameplay is really solid, and if you are a completionist, the achievements provide ample reply value.
The Bad: There should be warp points for every level in the game, not just half of them.
The Ugly: The chiptune sound type for the 8-bit music is not my favorite use of the style.

SUMMARY: The Messenger is an excellent action platformer, morphing into a Metroidvania in the latter half with only a few blemishes.