HomeAnimeANIME REVIEW | The "Monster Girl Doctor" Is In

ANIME REVIEW | The "Monster Girl Doctor" Is In 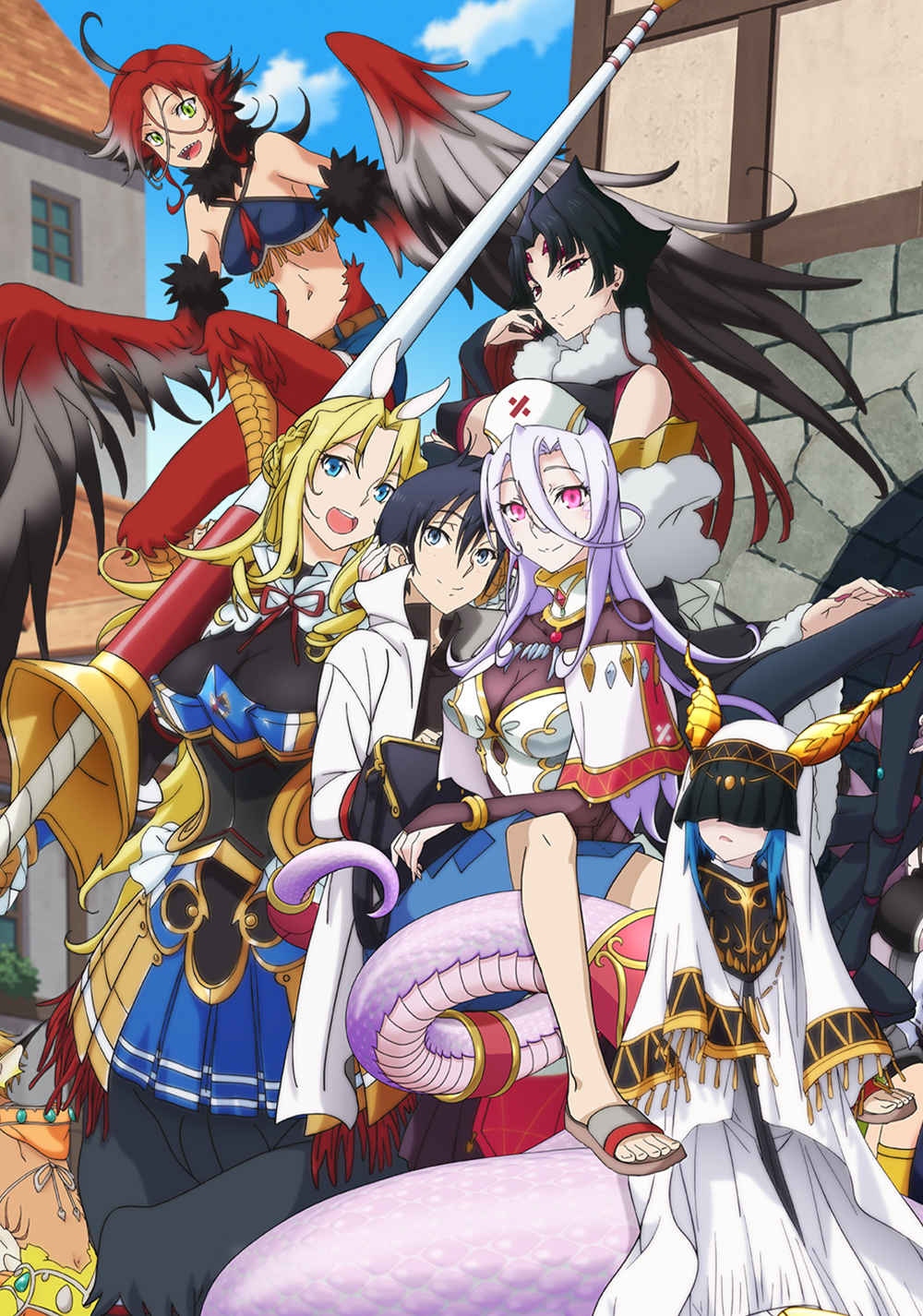 ANIME REVIEW | The "Monster Girl Doctor" Is In

Monster Girl Doctor is this particular hybrid of Monster Musume and Interviews With Monster Girls. From the former, viewers are treated to a world of many creatures great and small, mesh with a sliver of cuteness. As for the latter, there’s a level of intelligence shoveled in that looks into the science of fictional characters. But does combining these two elements help to make Monster Girl Doctor? Well...sorta.

Based on the light novel series by Yoshiko Origuchi, Monster Girl Doctor follows Dr. Glenn Litbeit (Shunichi Toki) and his lamia assistant Saphentite (Saori Ōnishi). The two are childhood friends whose paths recross at medical school, with the duo deciding to work together in their own office. Stationed in the town of Lindworm, where humans & monsters live in harmony, Dr. Glenn and Saphentite work to heal various monsters in and around town. As the doctor earns more patients, he — of course — earns him some possible love interests, much to the dismay of Saphentite. 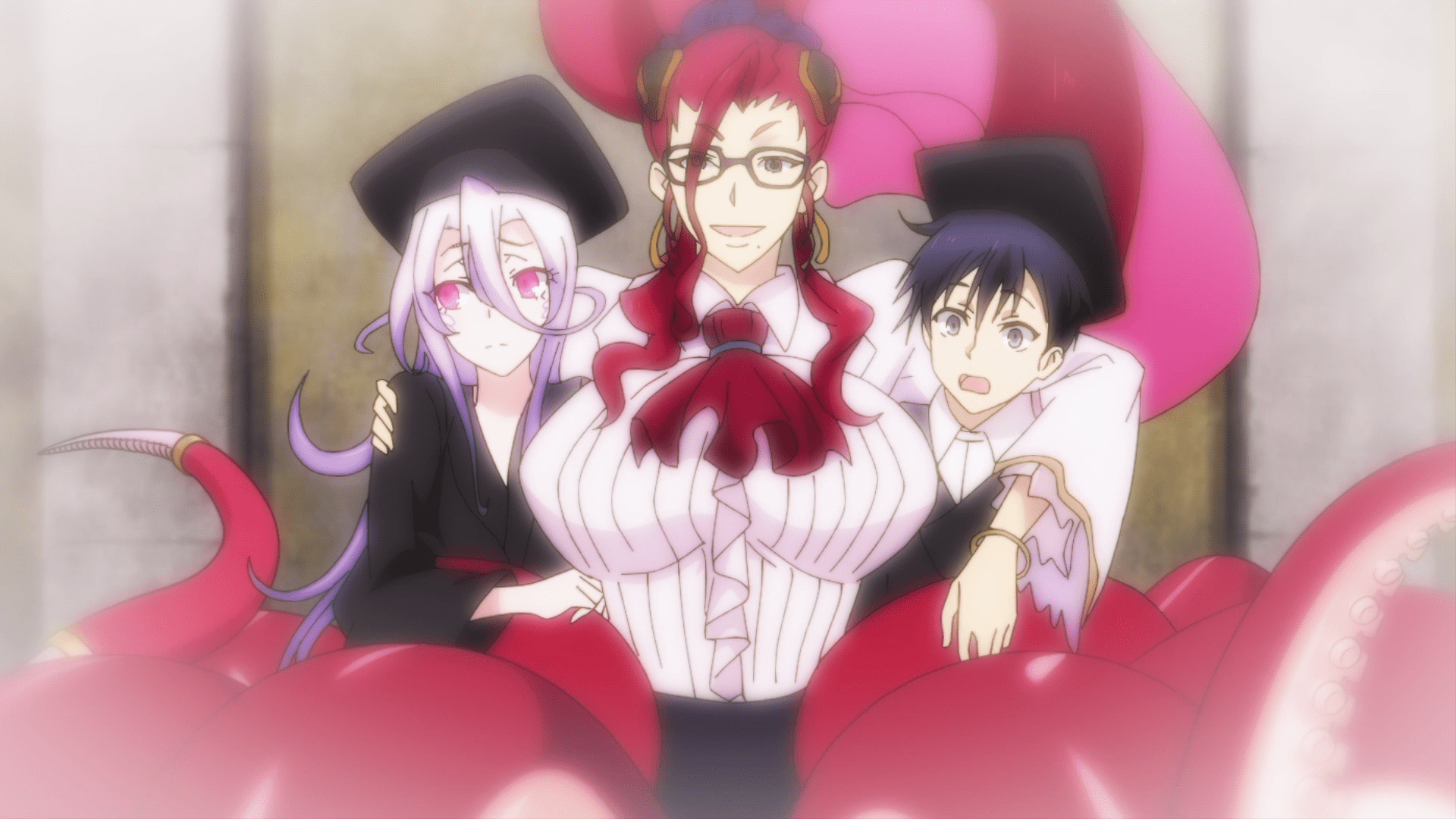 The multitude of monster girls that cross the path range from combat centaur and singing mermaids to harpies and cyclops. Their ailments range from the minuscule to the most severe. Whether it’s a simple need for horseshoes or dealing with a life-or-death tumor, Dr. Glenn attempts to find a cure for anyone by any means. Thankfully, with Saphentite and their tentacled mentor Cthulhy (Yukana), the young doctor does his all to make his patients (and possible future ones) persevere through the toughest of sicknesses.

When it comes to the brains of Monster Girl Doctor, there’s a strong book smart vibe that keeps the show above the waters. Taking Origuchi’s original novels, scriptwriter Hideki Shirane did their homework with crafting both illnesses and cures for these fantastical monster girls. Like Interviews with Monster Girls, the way these characters deal with their ailments and lifestyles is grounded in a kind of fringe reality, where if these creatures actually existed, they’d could very well fall victim to these certain sicknesses. From a mermaid’s dried-out gills due to staying out of the water too long to a harpy’s feathers falling out due to stress, there’s a level of intelligence that can be found in each episode’s patient-of-the-week. 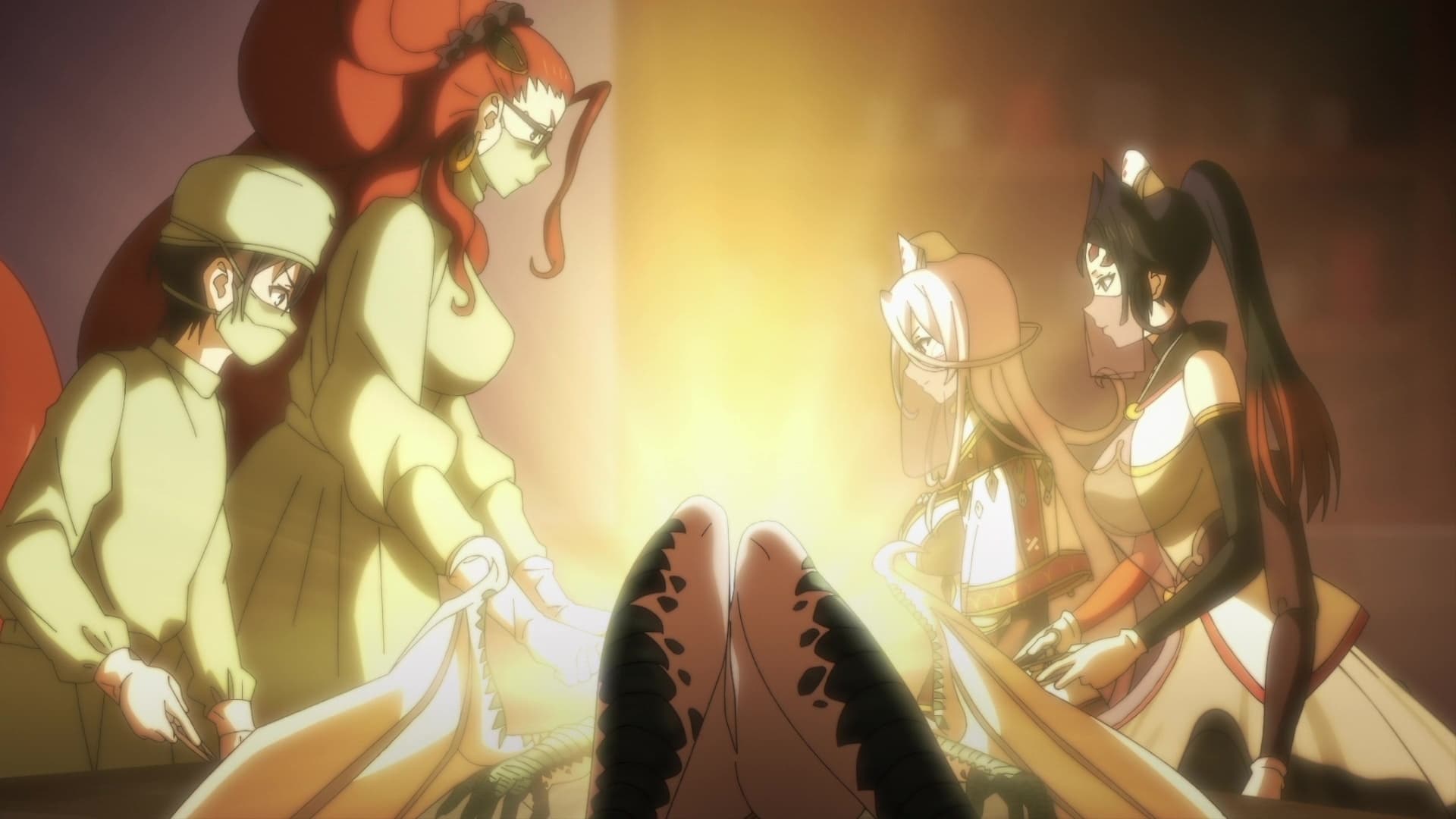 However, it’s in the street smarts department where the show stumbles. Practically by the end of the first episode, it’s apparent that Origuchi is attempting to craft a harem for Dr. Glenn with the monster girls. When centaur Tisalia (Sarah Emi Bridcutt) is cured, she becomes infatuated with the human doctor; after mermaid Lulala (Yukiyo Fujii) has her gills checked, she falls for Dr. Glenn; once harpy Illy (Sayumi Suzushiro) discovers the reason behind her ailment, she then becomes smitten. There’s a lack of creativity when it comes to the treatment of these monster girls, where their evolution towards being better individuals is just them realizing that they need a man, and that man is the doc.

Fortunately, that’s where Saphentite comes in and shines a fun light into Monster Girl Doctor. Yes, she’s also in love with Dr. Glenn, but she has advantages over the other girls that keeps her being the #1 monster girl in the anime. Her jealousy brings out some interesting reactions, ranging from angry pouts to her literally showing her fangs (and tongue) towards a romantic enemy. Most importantly, her antics are legit funny, especially when she has a little bit too much of the sauce. 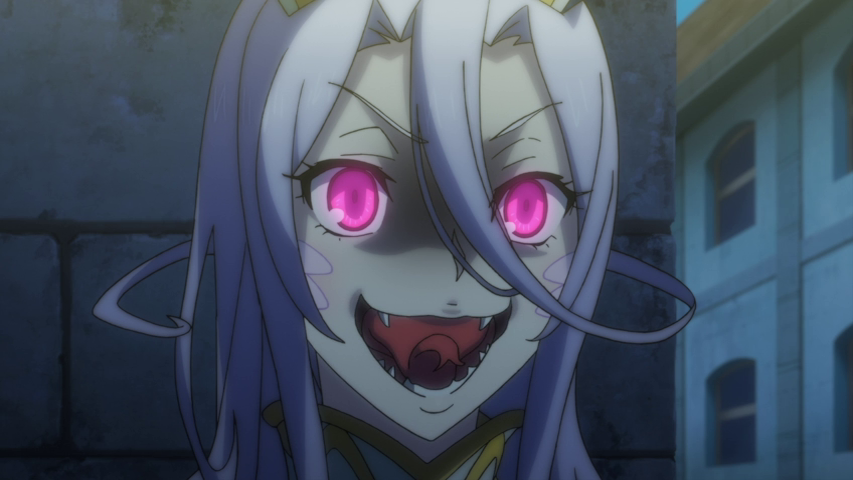 But where the show matters most is its heart, and not from a romantic aspect. The nature of the town of Lindworm is about harmony, something that the dragon chairwoman of the town Skadi (Atsumi Tanezaki) pushes in her speeches. It’s apparent that there’s still a stigma about monsters, which is brought up when they bring about a war we don’t see much of. With the aid of Dr. Glenn Litbeit, Skadi not only has a chance to live a better life, but she can connect better with the citizens in a means that will help give humans a better understanding of them. (I guess you can add A Centaur’s Life to where this anime took some of its concepts from.)

It’s in these more endearing moments where the voice cast shines. Ōnishi easily steals every scene she is, as she mixes up determination and cuteness into her performance. The same can be said about Tanezaki, whose Skadi takes an adorable little sister turn when her voice is finally revealed. Bridcutt’s Tisalia can suffer from “princess syndrome” (especially with her laugh), but her performance is actually good for some laughs. However, the one weak link is sadly Toki, whose Dr. Glenn Litbeit has a nice voice tone, but can be slightly whiny in certain situations. 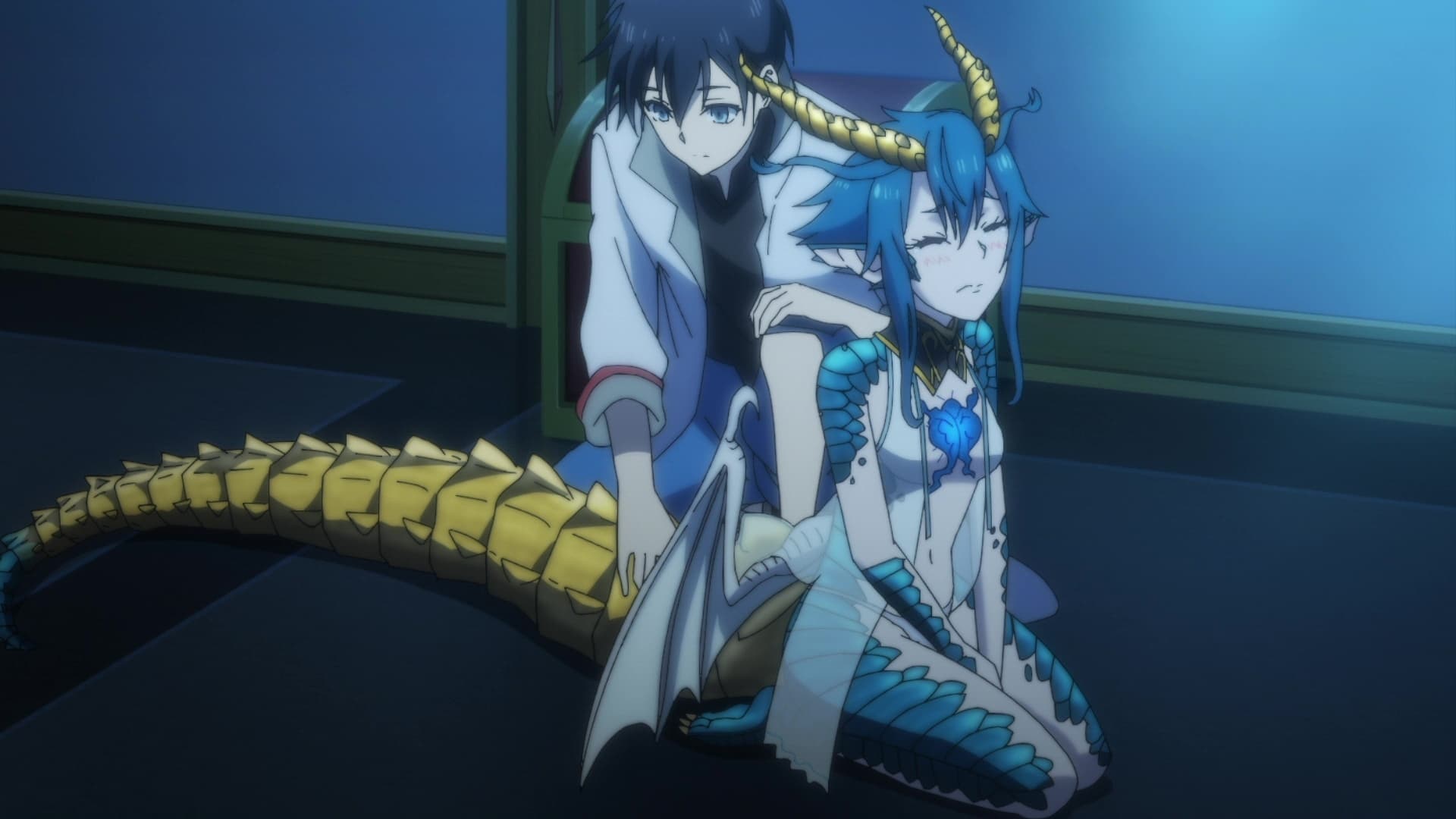 This does lead me to the other performance problem. Odds are it was intentional, but do these monster girls have to moan orgasmically whenever Dr. Glenn examines them?! I get that there’s fan-service in Monster Girl Doctor (especially when it comes to a certain centaur’s self-esteem problem and its questionable solution), but this part of the show took me out of the more interesting parts of the anime. Save this sort of stuff for an ecchi anime, not for a show that actually wants to try its best to make you feel something for these characters.

Arvo Animation (We Never Learn) attempts to do its best when it comes to crafting illustrator Z-Ton’s original characters. They look good, but some of the movement of the characters can be a little jarring. On foot, Glenn and the rest of the characters look stiff when they’re maneuvering. However, it’s when you see the harpies fly and the mermaids swim where the animation looks great. Its 3D animation can appear weird at times, but stuff like Cthuly’s tentacles and Saphentite‘s tail look really cool in motion. 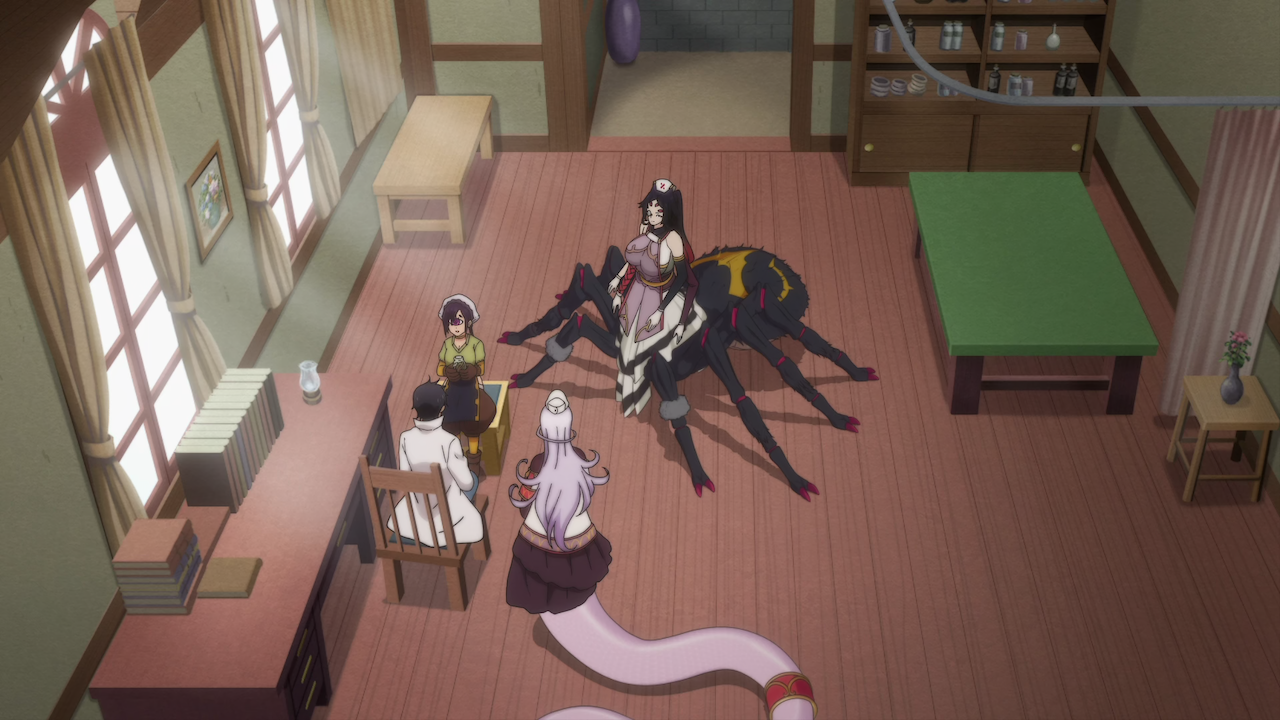 TO-MAS (Alice & Zoroku, Flip Flappers) crafts a decent soundtrack for the anime’s world, but it can come off as slightly generic. They’re normally good when it comes to fantasy anime scores, but their contribution doesn’t quite hit the same marks as their previous works. Both the opening and closing themes suffer from the same issue, where ARCANA PROJECT’s “Campanella Hibiku Sora de” and Aina Suzuki’s “Yasahisa no Namae” are unimaginative. They’re okay songs, but they’ll be drowned out quickly by better opening and ending themes.

In the end, Monster Girl Doctor has enough of a good story that makes it a worthy watch. However, its flaws may make it hard to soldier through some of its rougher areas. With that being said, Monster Girl Doctor knows when to show its brains and heart at the right spots, and can be sweet in some spots. Just take my advice and lower the volume during the examination scenes, as those in your household will probably think you’re watching something with three X’s in its rating.

Monster Girl Doctor can be viewed on Crunchyroll and VRV. It has been licensed by Crunchyroll. Episodes 1-12 were observed for review. Promotional consideration provided by Ellation.