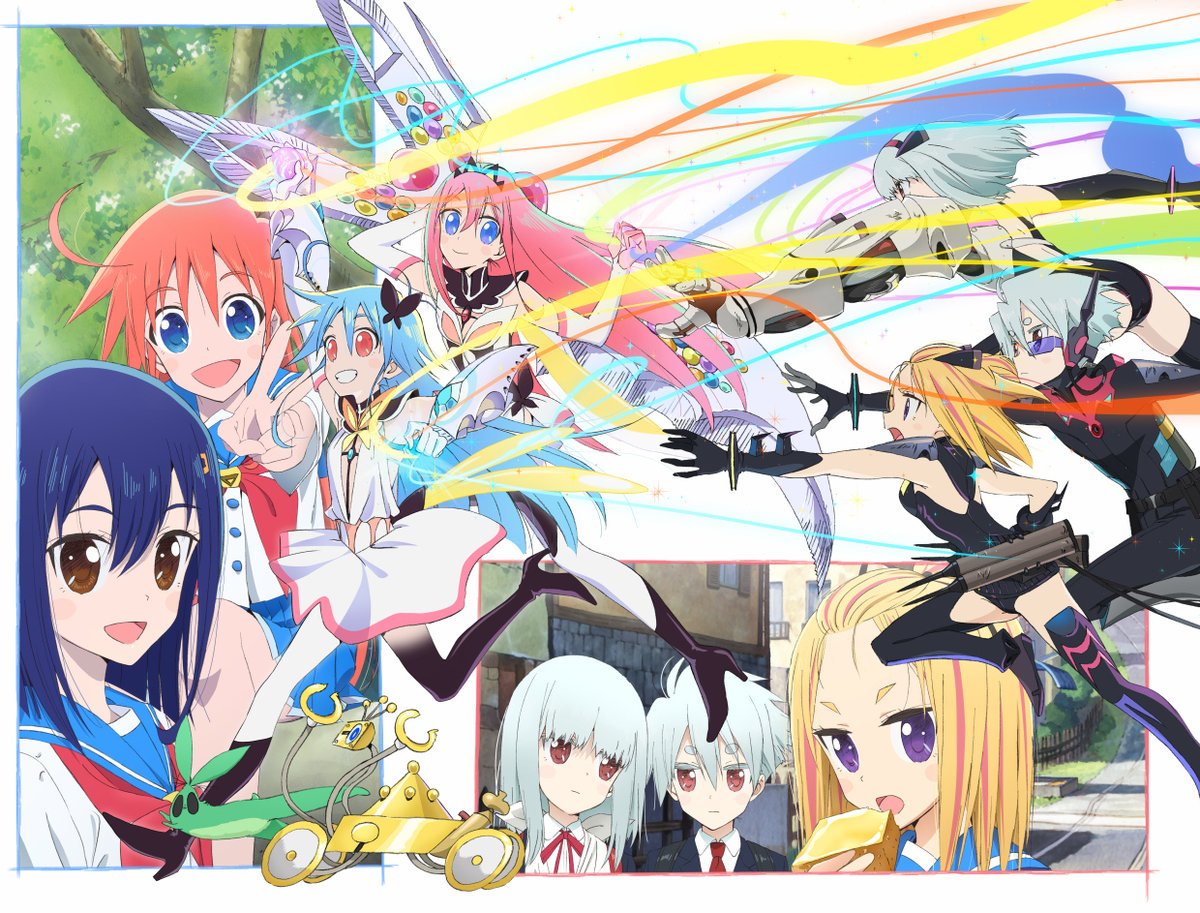 For the past couple weeks, the Fall 2016 anime Flip Flappers has been on my mind. It's not that Studio 3Hz's production was exactly a memorable show, although it did have its moments here and there. Rather, the thing that has kept me thinking about the adventures of Papika (M.A.O) and Cocona (Minami Takahashi) was its flaws, not to mention how they were executed.

It's weird, because when I reflect on Flip Flappers, I found myself comparing it to the works of GAINAX. It had elements of FLCL, Magical Shopping Arcade Abenobashi, Evangelion, and Gunbuster rolled into one program. On paper, this would no doubt lead towards a hit amongst anime fans across all the oceans. However, because of the way it was produced, Flip Flappers found itself falling into the traps of the more recent lineup of GAINAX's library. I'll get further into detail on why this had happened in a moment, but first, a brief synopsis. 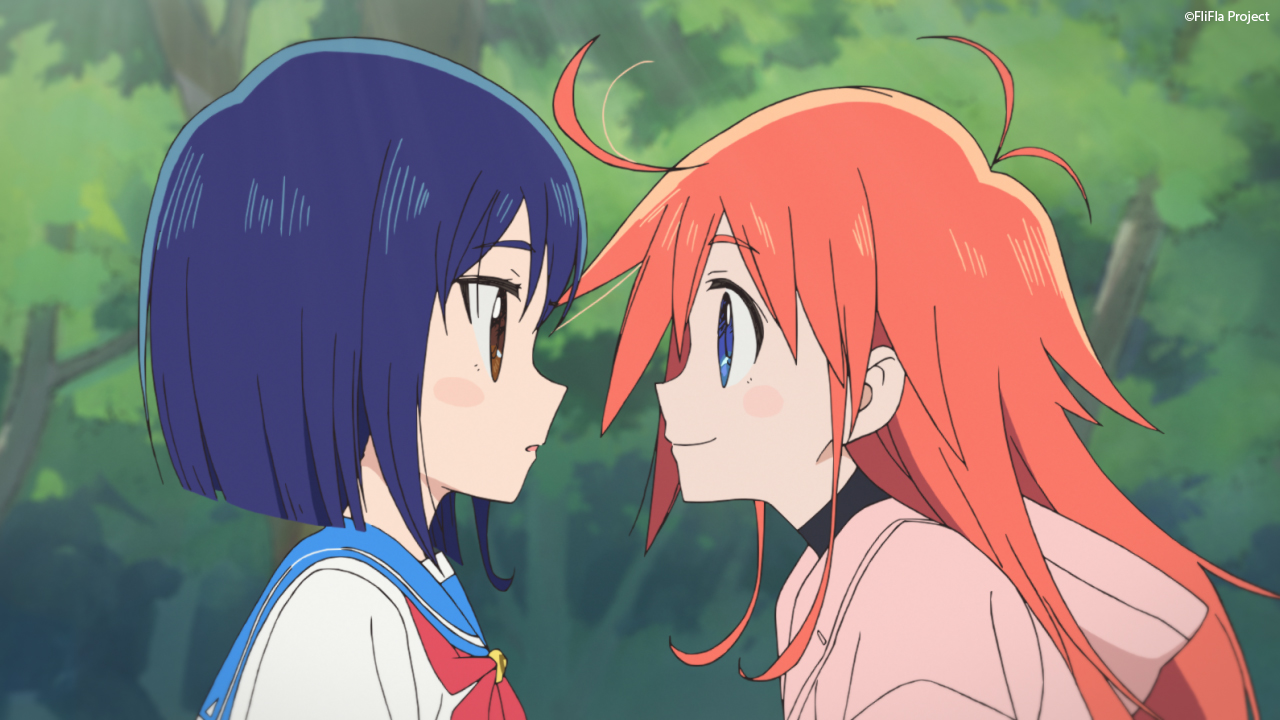 Flip Flappers follows the young middle school girl Cocona, as a chance meeting with Papika has her going on wild adventures in mystic worlds known as Pure Illusion for the FlipFlap Organization. Seeking fragments to grant a wish, the two newfound friends journey through these worlds with their robot ally TT-392 in tow, transforming into magical girls in order to complete their missions. Meanwhile, Cocona's childhood friend Yayaka (Ayaka Ohashi) reveals herself to be working for the rival group Ascleplus, who seeks to dominate the world with the fragments in their possession. As the missions get wilder, the truth behind Cocona, her past, and the real connection between her and Papika are slowly revealed.

As this was an original anime series -- one not adapted from a manga, light novel, or visual novel -- there's a lot of room for this series to be both creative and innovative. This was showcased highly by Studio 3Hz's animation team as they presented viewers with one gorgeous shot after another throughout its entire run. The imaginative worlds, the beauty of the characters, and even the high-flying action that occurred on a weekly basis was up there are some of 2016's best visuals these eyes bore witness to this year. (One of the show's highlights involved Cocona & Papika visiting a gloomy school, one that served as a frightening metaphor for the way society tries to mold people into unoriginal beings. Seriously: you get chills looking at the students and their surroundings as you watch it.) 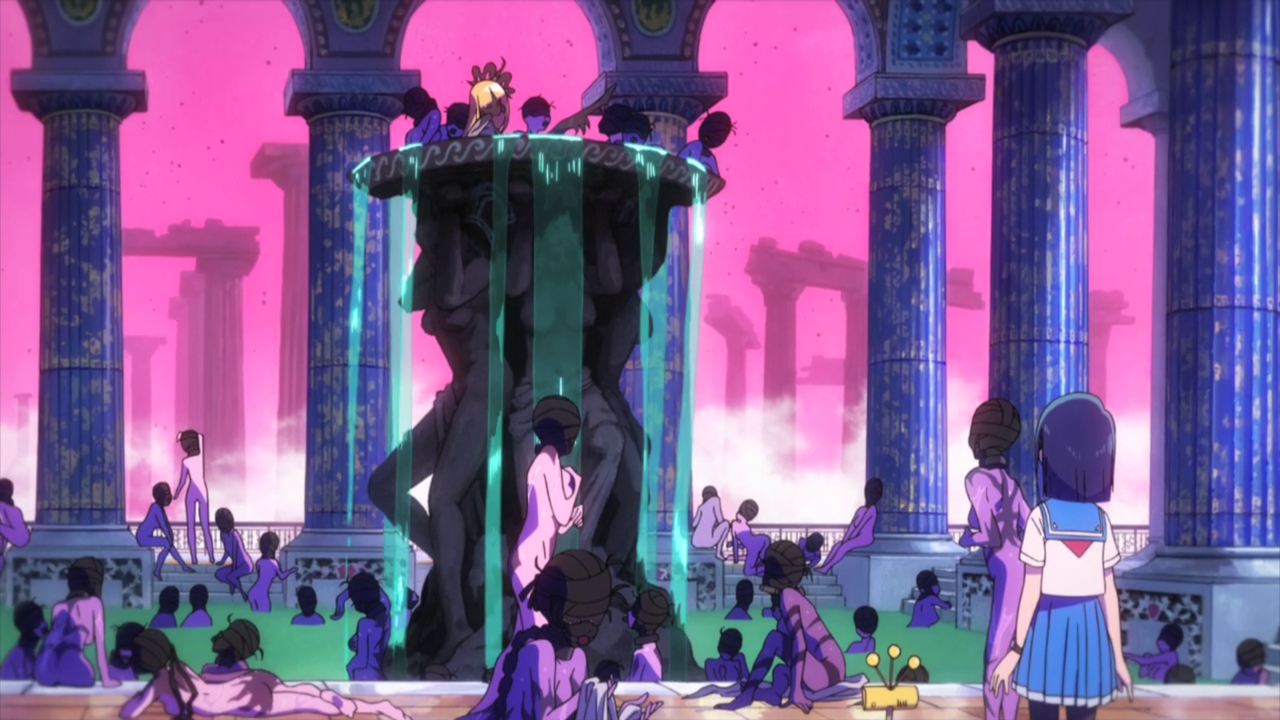 However, while the animation stands as being one of last year's highlights, where Flip Flappers suffered was with its writing. Because the show's head writer Yuniko Ayana (KINMOZA!, Digimon Adventure tri.) left production halfway through, it was up to a far inexperienced screenwriter by the name of Naoki Hayashi (whose sole writing credit was for one episode of Da Capo III) to attempt to finish what Ayana started. And that's where the series began to suffer.

Ayana's contributions were original, eye-popping, and often a joy for the mind to behold. Hell, even the homage to Mad Max in Episode 3 was brilliant right from the get-go. However, when Hayashi took the reins at Episode 8 (with the seventh episode written surprisingly well by the show's director Kiyotaka Oshiyama), we started seeing the show's narrative fall apart with too much exposition and not enough explanation. From its stiff storytelling to faux metaphors, what was once the TV highlight of my week quickly changed into a forced obligation. It was as if I went from watching a series from GAINAX's golden era to the current mess of work the studio tends to do today. 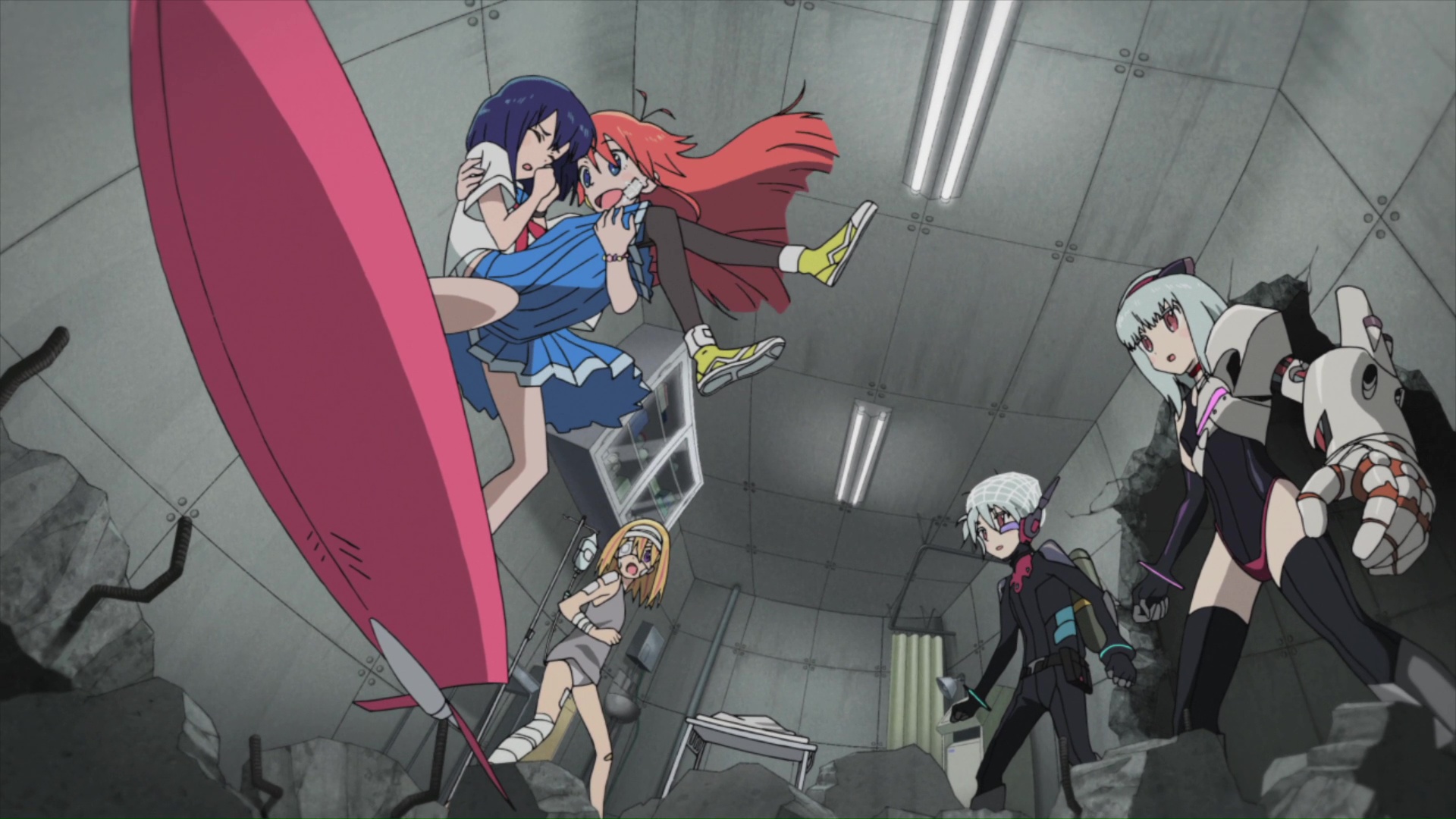 In fact, I almost stopped watching it, until its eleventh episode ended in a way that made me want to tune in to see how this strange show would meet its conclusion. Without spoiling anything, the final two episodes culminate in a visual, philosophical, and spiritual smorgasbord that helped to push Flip Flappers to become the better show it initially wanted to be. Truths were revealed, hearts were mended, and hope floated once more. Strangely, as I ponder about how production must've occurred, I got the sense that Hayashi was trying to loosen the knots that Ayana left in the show's wake, taking nearly four episodes for the anime to get back on track.

Honestly, I can't blame Hayashi for trying to finish another writer's work, as I'm sure they did the best they could with what Ayana left them. To adapt a manga and do it poorly (i.e. last year's Berserk adaptation, Terra Formars: Revenge) can be somewhat inexcusable, as writers are practically given a script to work with right off the bat. However, it's a lot harder to take an original creation, and attempt to salvage it from someone else with very little to go off on. For Hayashi and Studio 3Hz to be able to pull off an actual satisfying conclusion for Flip Flappers is a miracle by any right, even if they had to stumble about for a few episodes to get back in the right state of mind. 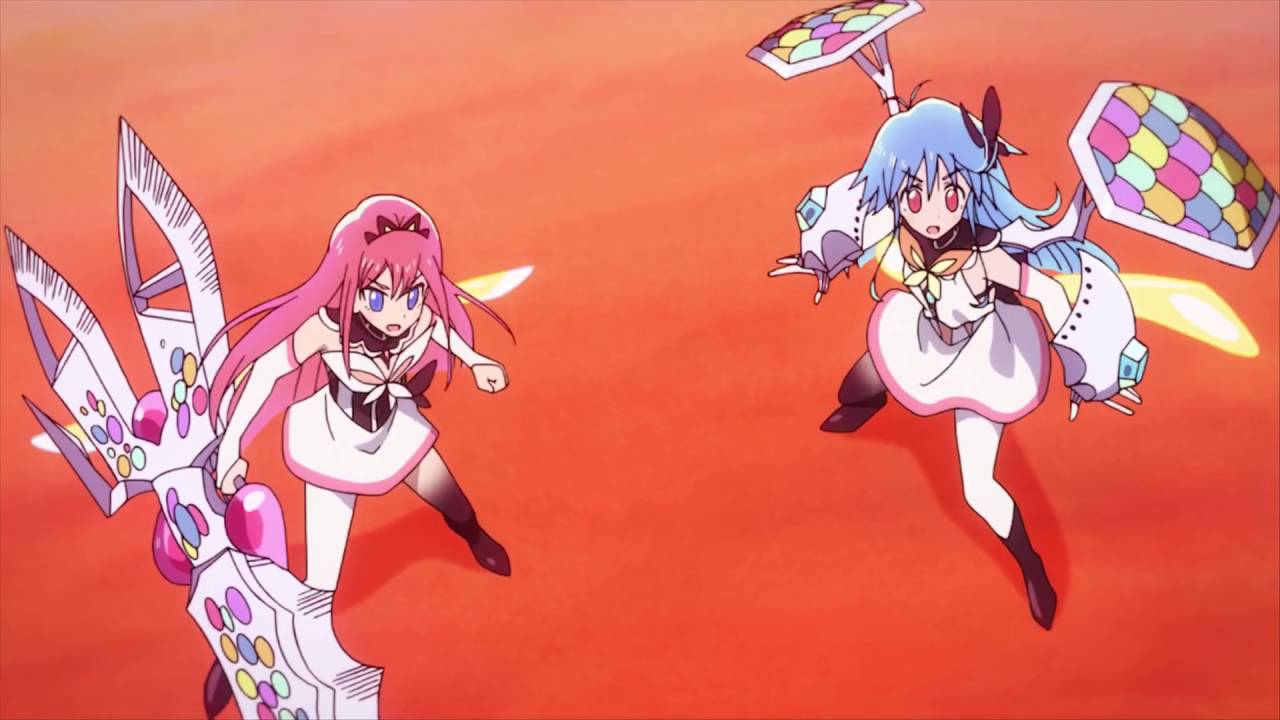 Even with a couple flawed scripts, the voice cast did a tremendous job with their performances. M.A.O's Papika was filled with energy and adorableness, with some heart-stopping moments of grief and sadness thrown in to help create a multilayered performance. As Cocona, Takahashi dove into a performance filled with self-doubt and angst, with a shred of positivity to push her towards doing the right thing. Meanwhile, Ohashi's Yayaka tore between wanting to be a good friend and a frightful enemy to Cocona, with the end result delivering an emotional performance that played to both sides of the spectrum.

To-Mas Soundsight Fluorescent Forest (momokuri) showcased a range of powerful action-packed compositions, light-hearted melodies, and some ominous sounds within its tightly-wrapped score. Opening theme "Serendipity" by ZAQ is wondrous techno track that showcases the brightness that Pure Illusion brings forth to Papika and Cocona on a weekly basis. Meanwhile, end theme "FLIP FLAP FLIP FLAP" by To-Mas & vocalist Chima is all about the mystery of Pure Illusion, and the excitement that comes with discovering what lies ahead. (Be sure to listen to the full version, as it gets quite Sgt. Pepper-y towards the end.)

Flip Flappers may have its share of bumps on the road, but it's worth soldering through these rougher patches to get to its satisfying destination. Beautifully animated and filled with moments both light & dark, the series balanced the means of showcasing the importance of taking chances and embracing new experiences, even if its execution isn't all that perfect. In laymen's terms, prepare for battle, magic, love, and a bit of disappointment as Flip Flappers pushes you towards a tale that's all over the place in more ways than one.

Flip Flappers can be viewed on Crunchyroll, Hulu, and The Anime Network. It has been licensed by Sentai Filmworks. Episodes 1-13 were observed for this review. Promotional consideration provided by Crunchyroll.