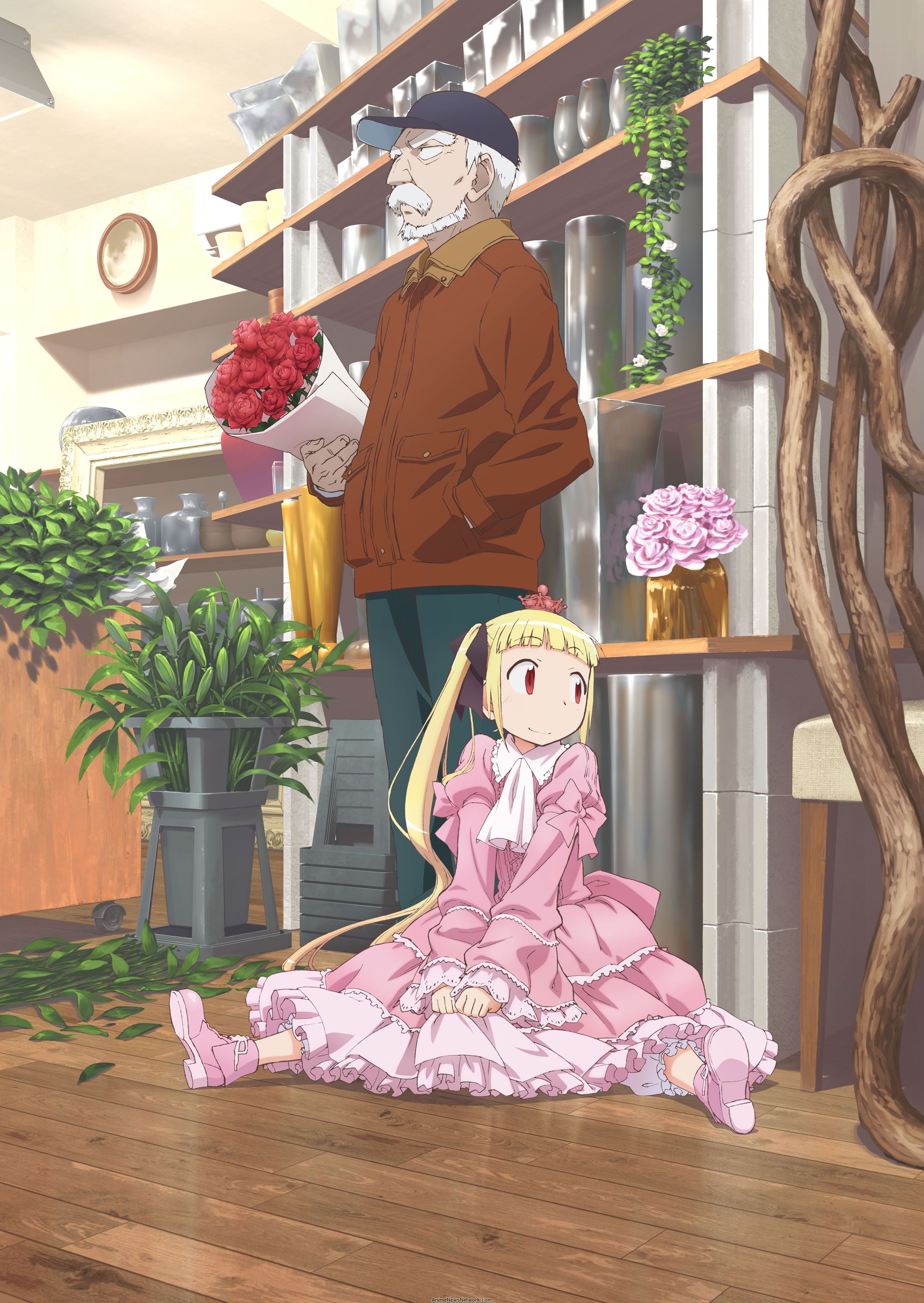 Anime can sometimes be a tricky thing to describe. In most cases a series sticks to just one kind of genre and form of storytelling. However in the rarest of occasions a show could be one thing, and in the blink of an eye transform into something else. This is the case with Alice & Zoroku, which starts out as a ball of adorable action/comedy with some serious elements. But with the snap of its fingers, it becomes a deep philosophical trip down the path that lies between imagination and reality.

Alice & Zoroku focuses primarily on two characters who couldn't be more different from one another. A powerful young girl named Sana (Hitomi Ōwada/Sarah Wiedenheft) escapes from a research facility, where she runs across the elderly Zoroku (Akio Ōtsuka/John Swasey) at a convenience store. After a run-in with two magical twins Asahi (Natsumi Fujiwara/Brittney Karbowski) & Yonaga (Akari Kitō/Brittany Lauda) Zoroku decides to let Sana reside with him and his granddaughter Sanae (Aki Toyosaki/Tia Ballard), as the two attempt to protect Sana from the mysterious organization that kept her captive. 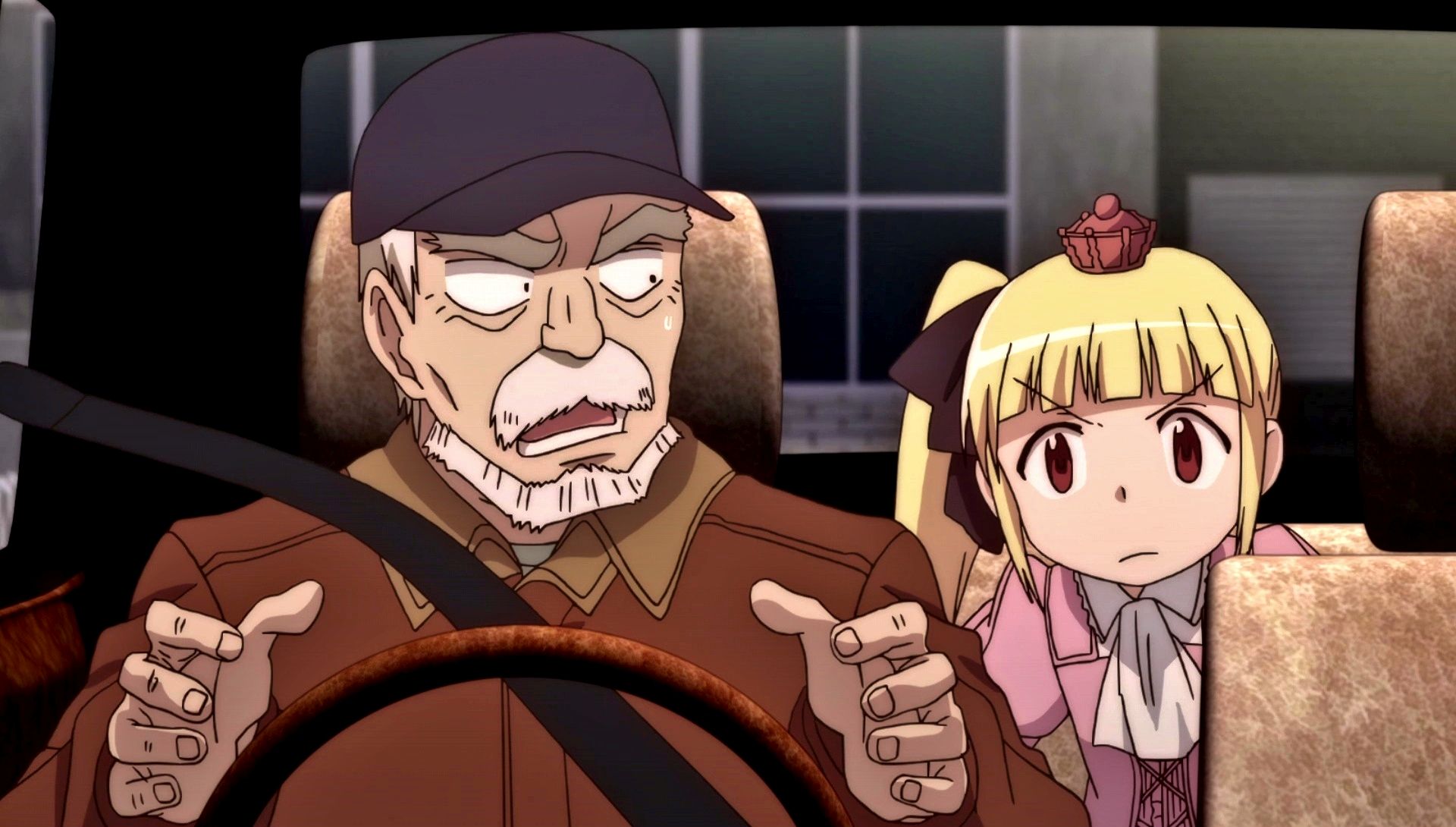 What makes this anime work so well is its chemistry between the two main characters. You've got a young spunky girl with the power to materialize anything she wants (known here as "Dreams of Alice") as under the care of a curmudgeon who doesn't take even the tiniest of craps from anyone. Sana sometimes attempts to use her magic to better her surroundings, often ending with Zoroku whomping her on the head and scolding her stupidity. It's a silly back-and-forth of adorableness and elderly wisdom, especially when Sanae enters the foray.

Alice & Zoroku also knows how to pull punches in the emotional department. In one instance Sana is captured by the secret organization, with her bound, blindfolded and gagged in the back of a limo as a sadistic woman named Minnie C (Mamiko Noto/Colleen Clinkenbeard) tells the young girl that she isn't even human while threatening to kill her if she doesn't comply to her situation. It captures the fear in a little girl scarily well, with Sana lying in a puddle of her own urine and her blindfold drenched in her tears. When Zoroku finds himself able to save the young girl, an ocean of feelings succumbs both the characters and the audience. 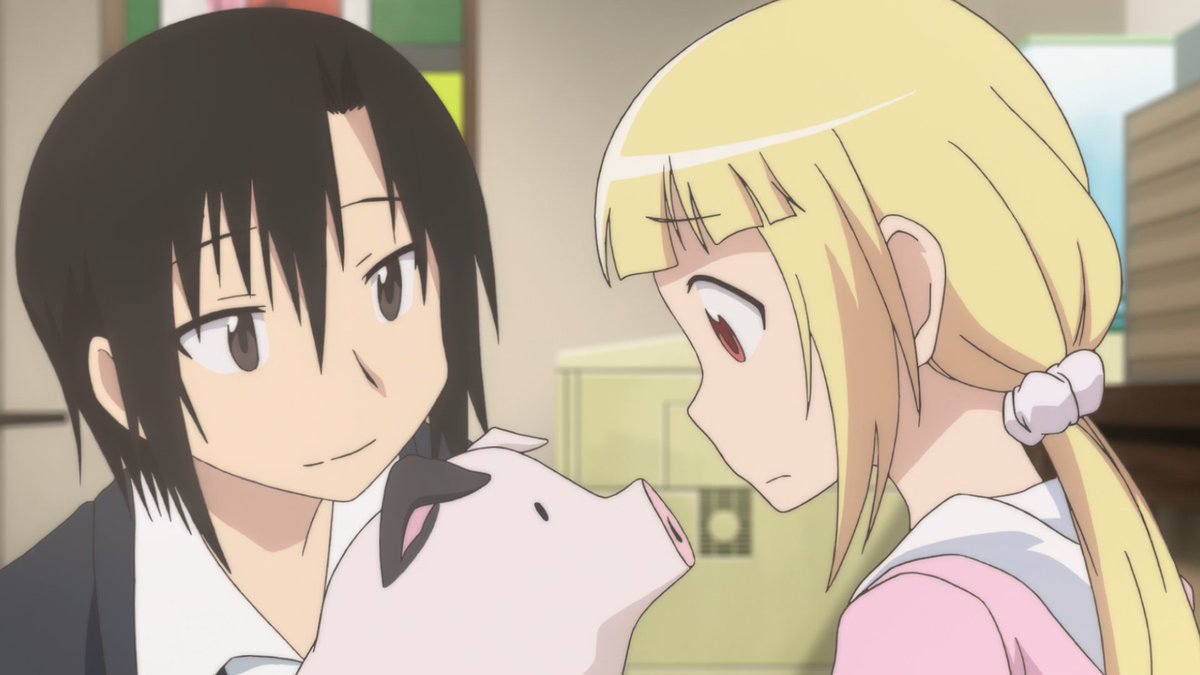 This anime surprisingly does a great job with showcasing some of the finest humanism around, despite it being something of a magical girl fantasy. You can see this sort of feeling being presented when Sana becomes fully accepted into Zoroku and Sanae's lives, with one of the most beautiful moments that presents what it means to be part of someone's family. Even at its most carefree Alice & Zoroku delivers an emotional kick that is often saved for the likes of Miyazaki, Hosoda, and Shinkai.

The feeling becomes more apparent during the anime's second half, when we're introduced to a young girl named Hatori (Shū Uchida/Felecia Angelle) that has the same powers as Sana. After she freezes time and runs away from home with her friend Ayumu (Minami Takahashi/Apphia Yu), they accidentally freak out Sana, who swears revenge against the two for making her feel frazzled. It's at this moment when the show's genre transforms into a strange psychedelic adventure, blending the influence of Lewis Carroll's classic trip down to Wonderland with something straight out of Persona 5's Metaverse. 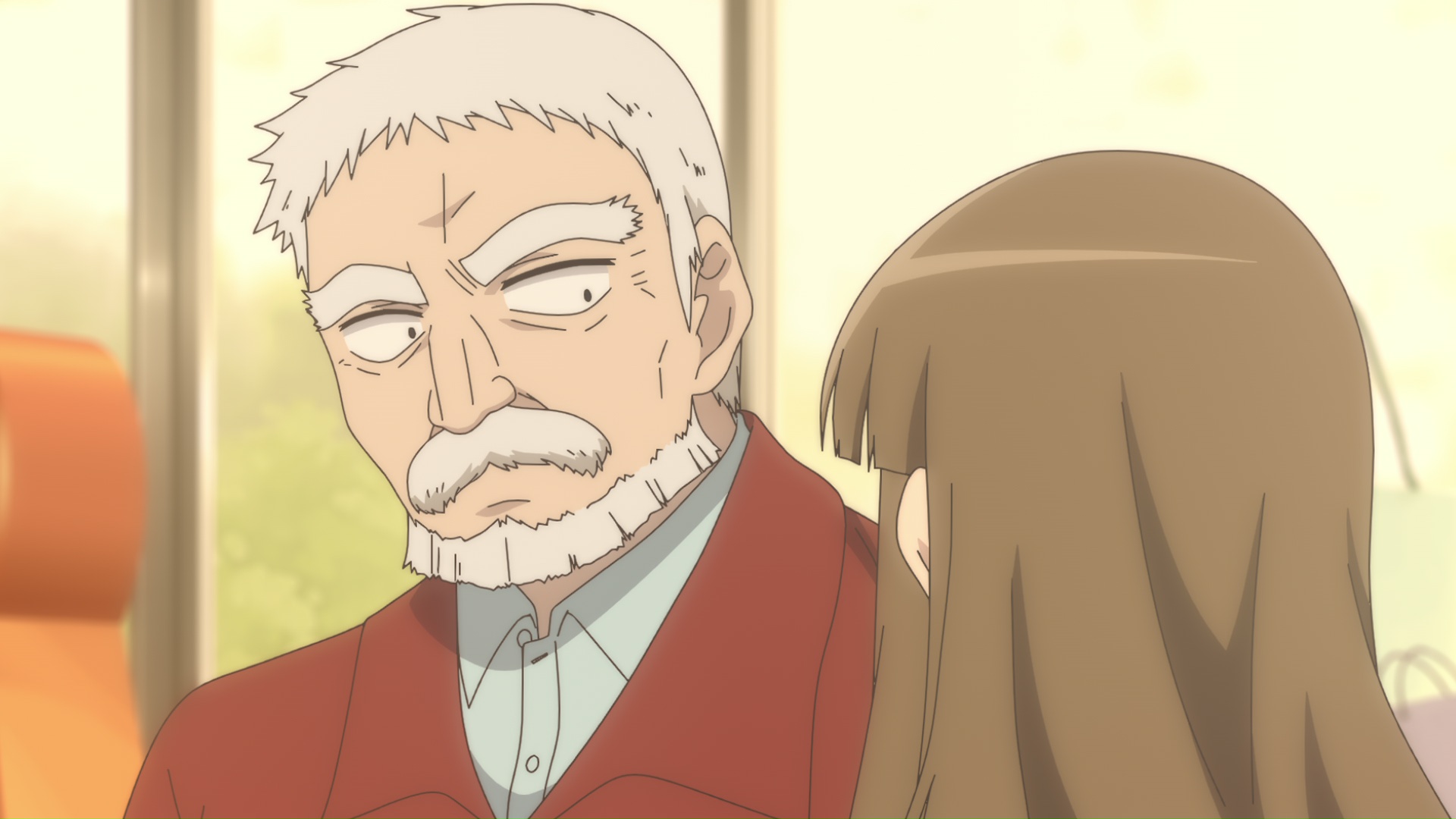 What Alice & Zoroku encapsulates is the need to belong in a society where even the tiniest of strangeness a person has can easily push them out. Throughout the series Sana fights within herself the need to blend in with the rest of the world, even when she knows that's a lot easier said than done. It helps to have Asahi and Yonagi there to aid with her struggle, but it isn't until Hatori shows up when she truly finds her reflection looking right back at her. They're scared, unsure, and feel like outcasts in society, and as they fight for normalcy the Dreams of Alice and the Wonderland program attempt to break through into reality.

To be blunt, there are some places in this anime that can get confusing. Mind you, it doesn't go into Evangelion levels of philosophy, but some later moments in the series will raise a few eyebrows as they mosey on by without any true explanation. Even the concepts of Dreams of Alice and the Wonderland program aren't truly flushed out here in the anime. Perhaps viewers are expected to just accept what they see and not take anything too seriously, but when it drops one mental bombshell after another it's kinda hard to do that. 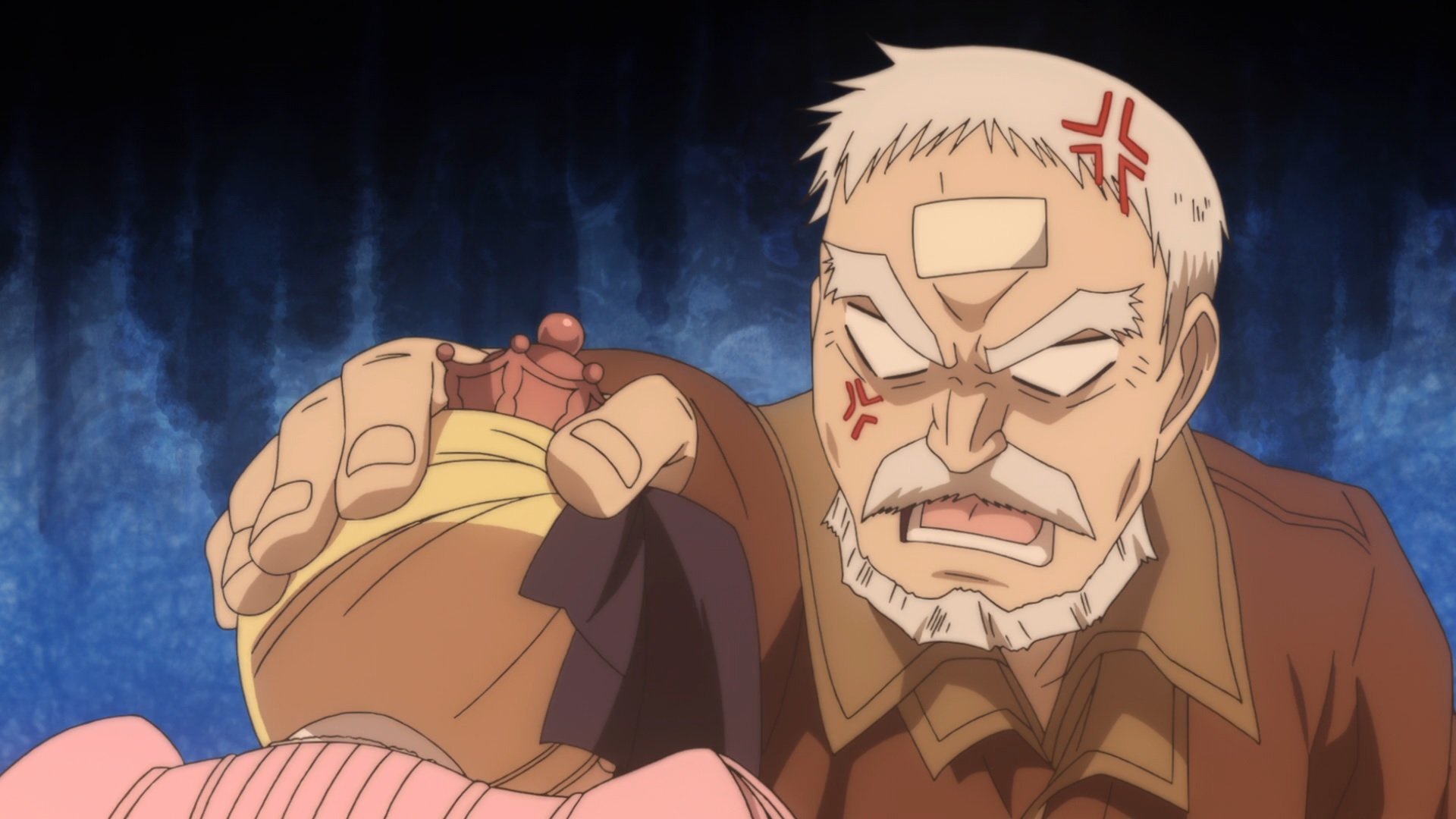 It also should be noted that those looking for a magical conclusion of sorts will be disappointed. Although the means of the solution in the second half are solved in the most hilarious of ways, it rushes possibly the next twenty years of Sana's life within just under a minute. In all honesty Alice & Zoroku should've gone for another twelve episodes to truly tie up the loose ends and showcase Sana at an older age adapting to life around her. It doesn't ruin the overall presentation of the series though, but at the same time it feels like more could've been done with this property. Still, even with its mediocre ending, this anime is definitely a bright spot in the Spring 2017 season.

J.C.Staff (Amanchu!, Flying Witch) animates the series with the perfect blend of childlike imaginative wonderment across a real-life backdrop. The first half's battle sequences are hugely impressive, almost pushing the boundaries that a TV budget usually has. The characters are also presented in a tinge of cuteness, especially when it comes to facial expressions and outfits. Its bright colors and emoting visuals make it one of the most wondrous shows for the eyes. 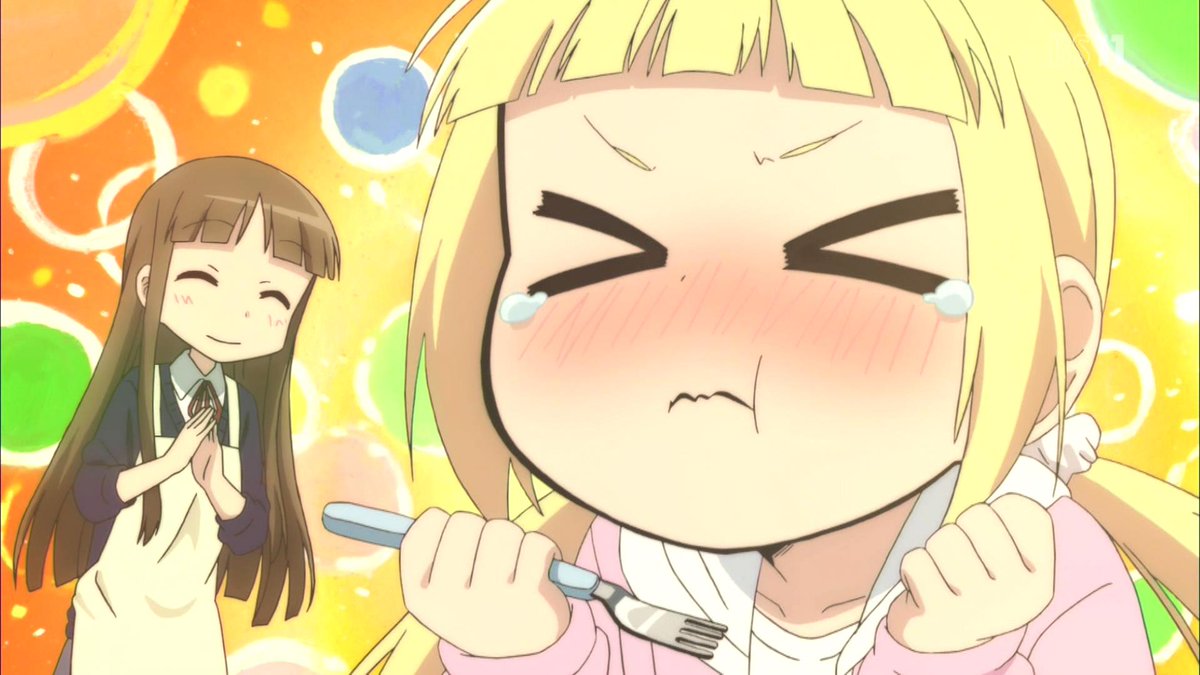 There's a pitch-perfect dynamic between actors Ōwada and Ōtsuka as Sana and Zoroku, giving off a true grandparent/grandchild performance that nearly as real as it gets. The contrast of cutesy and elderly surprisingly mesh well between the two, concocting a level of chemistry that results in great performances from both seiyuu. Toyosaki's Sanae sometimes pushes the adorableness beyond Ōwada's Sana, giving way to perhaps the most sweetest and heartwarming performance of sisterly love.

Funimation does an outstanding job with the English dub, with Wiedenheft capturing the same level of cutesy attitude and spunkiness as Sana. Swasey gets the gruff right in his performance as Zoroku, while at the same time presenting a tone that shows that he deeply cares for Sana's well-being. Meanwhile Ballard sounds overjoyed as Sanae, emoting with the right amount of playfulness and love in every line given. Overall it's easy to find yourself switching back and forth between the Japanese and English performances, as both are simply wonderful to listen to. 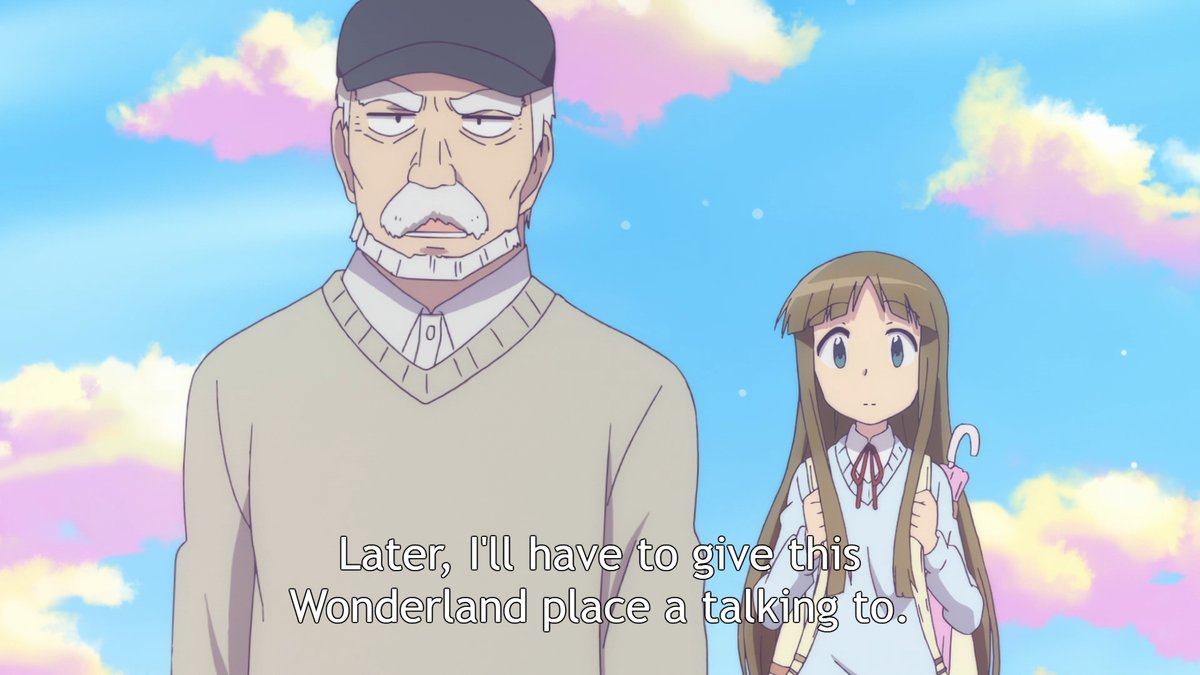 The eclectic sounds of To-Mas (momokuri, Flip Flappers) bring forth a powerful soundtrack that waltzes between a dreamlike state and a rude awakening. Often innocent-sounding the music plays well with both the most intense and calming of scenes. Opening theme "Wonder Drive" by Oresama pushes the viewers through a magical doorway into the world of Sana, one that gives off a youthful vibe and a hopeful spirit. Closer "Chant" by Toi Toy Toi emotes in the same way, only emphasizing a more daydream mentality that seemingly floats through the past of our main heroine.

Although it fails to make a perfect landing, Alice & Zoroku is one anime that any fans of the genre shouldn't dare miss. Funny, sad, action-packed, and philosophical this adaptation of Tetsuya Imai's manga is the type of series that'll easily wow you with its imagery and storytelling. It may not be fantasy at its best, but Alice & Zoroku gets pretty damn close to it.

Alice & Zoroku can be viewed on Crunchyroll, Funimation, and VRV. It has been licensed by Funimation. Episodes 1-12 were observed for this review. Promotional consideration provided by Crunchyroll and VRV.

Background Noise: Purple Rain by Prince - Does it need to be mentioned why this one of the greatest albums ever put to vinyl? After all, 25 million sales don't lie. Nevertheless the recent release of the Expanded Edition is practically a 3 1/2-hour party that rocks, dances, sways, and grooves in all the right ways, making it a true essential for anyone's record collection. Like Sana and her Dreams of Alice ability, Prince pulls out any sort of audible concoction like magic. It's a sad (albeit beautiful) reminder of why his loss last year hit the music scene harder than anyone else's, with classics "Let's Go Crazy" and "Darling Nikki" and the unreleased-until-now "Electric Intercourse" and "Velvet Kitty Cat" showcasing why we'll never see anyone like the Purple one ever again.