HomeAnimeANIME REVIEW | "My Sister, My Writer" An Anime Abomination

ANIME REVIEW | "My Sister, My Writer" An Anime Abomination 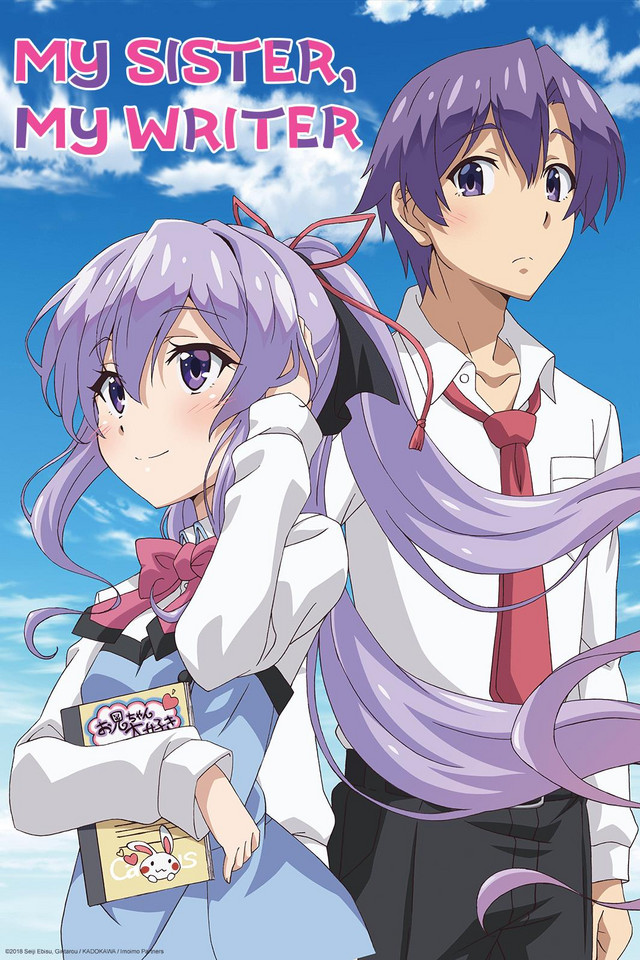 ANIME REVIEW | "My Sister, My Writer" An Anime Abomination

We need to have a talk, anime industry. Now you have been delivering quite a lot of content for us over the past year. Some winners, some losers, and then shows that were okay but were quickly forgettable. You showcased many a fun isekai series with demon lord and slime monster protagonists, had cute girls camping or making comics, and even made a couple of really good game-to-anime adaptations this year. So all in all, you've done a fine job.

But there's just one thing that I know for a fact that practically everyone in the world does not tolerate: anime rom-coms where siblings try to date one another. It should be common knowledge that wanting to date your brother or sister is not only disgusting, but also very very illegal (save for Alabama). Yet you try to push this premise here and there without thinking of the repercussions. Granted, we had a good laugh about it when you did it with Oreimo. While we wagged our fingers at such an ending, we were also holding back our snickering over the fact that you actually went that route. The problem is, like jokes revolving around the length of a CVS receipt, they only work once before it gets wicked tiresome. 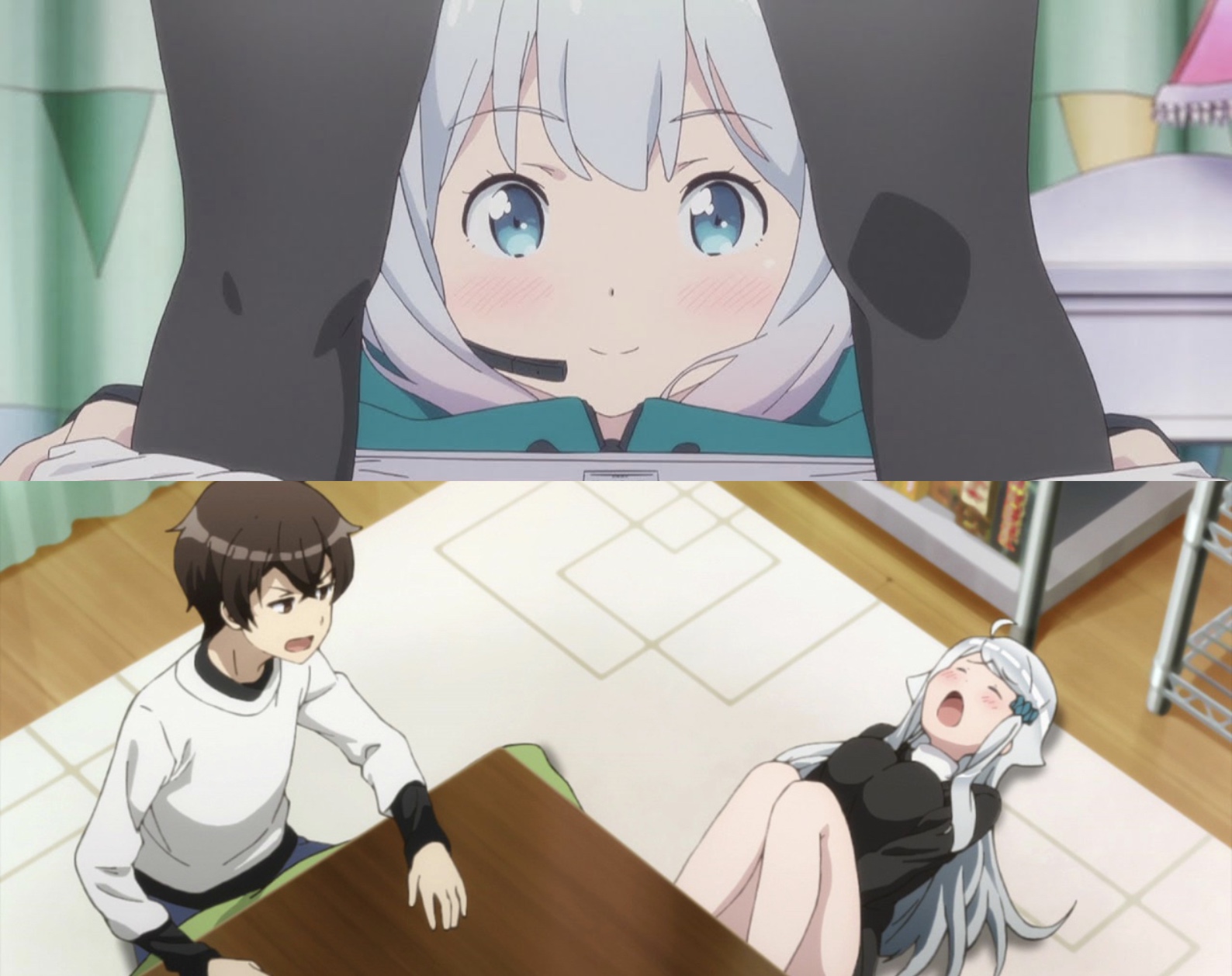 Top: Eromanga Sensei, Bottom: A Sister's All You Need

Last year's Eromanga Sensei nearly treaded these dangerous waters, only to manage to add some better females to the mix that have a way better shot at being the male protagonist's main squeeze. A Sister's All You Need brilliantly satirized the whole genre, almost giving a middle finger to anyone who actually likes these kind of story outcomes. Even this year's fantastic Rascal Does Not Dream of Bunny Girl Senpai makes a jab here and there at these stories with the dynamic between Sakuta and his little sister Kaede.

Which now leads me towards why we're having this intervention of sorts: My Sister, My Writer. The story of hack writer Yū Nagami (Tasuku Hatanaka) being out-written by his younger sister Suzuka (Reina Kondō) should lead to some comedy gold. Heck, having the sister beg the brother to pretend to be her alias Chikai Towano in order to keep her true identity secret screams nods to the likes of Cyrano de Bergerac. (And I just threw up in my mouth while making that comparison!) But then, you throw in the fact that the younger sister wants to knock boots with the older brother. 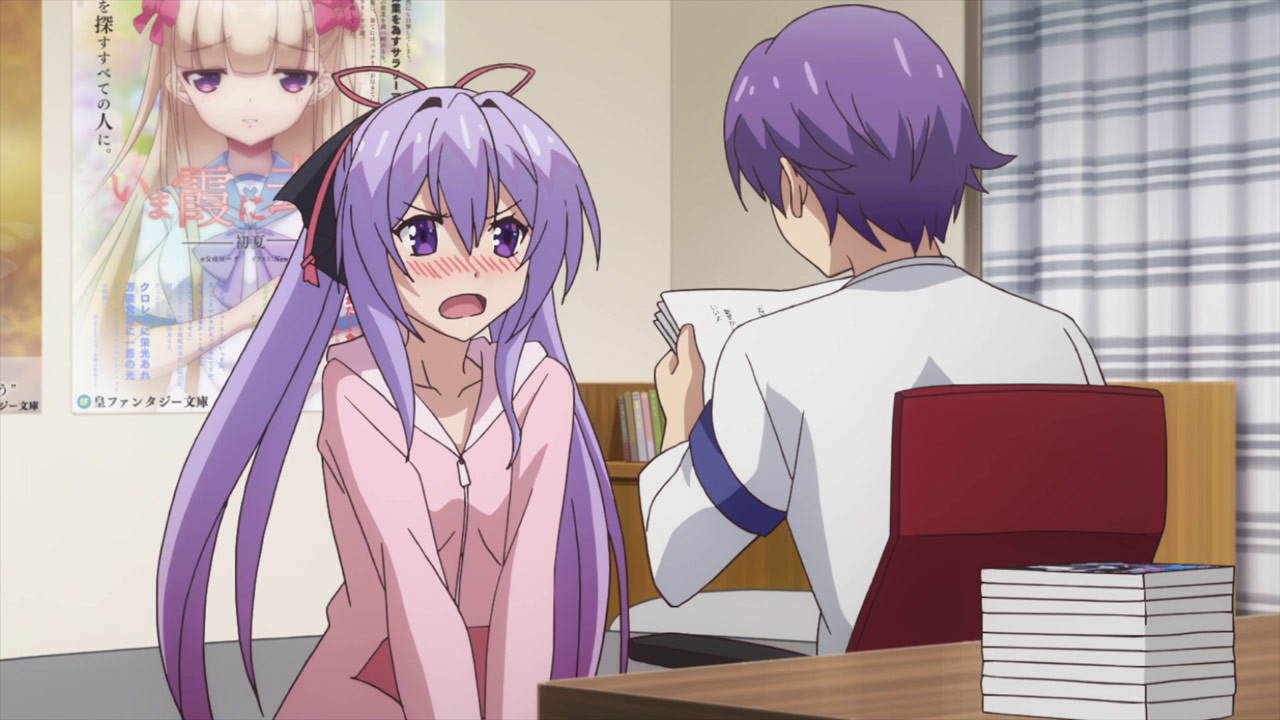 You can't tell while reading this, but I'm giving you a Grade-A KonoSuba-styled death sneer over this premise. There is no way in even the deepest, dankest parts of Hell where this sort of thing would be embraced by anyone in either the anime or its original light novel-based community. One would understand if they went the A Sister's All You Need route, where this sort of plot would be ridiculed from Point A to Point Z. But nope, this anime decides to praise such a plot, especially where the light novel story written by Suzuka is exactly about a little sister falling in love with her big brother.

Everyone seems to love this light novel, to the point where it becomes a source of inspiration by Yū's classmates, voice actors, radio station hosts, and even the anime industry. However, not a single word of this light novel has been shown in the slightest in this series, giving way to such lazy boasting and praise without diving into Suzuka's book by any means. It takes the route of a bad play written by George St. Geegland and performed by Gil Faizon (charmed, I'm sure), where all the audience gets is too much tuna and nothing remotely entertaining whatsoever. Even with a character as somewhat fun as light novel artist Ahegao W Peace Sensei (Chinatsu Akasaki) in the mix of all this wanton bullshit, My Sister, My Writer just keeps getting more terrible as it progresses. 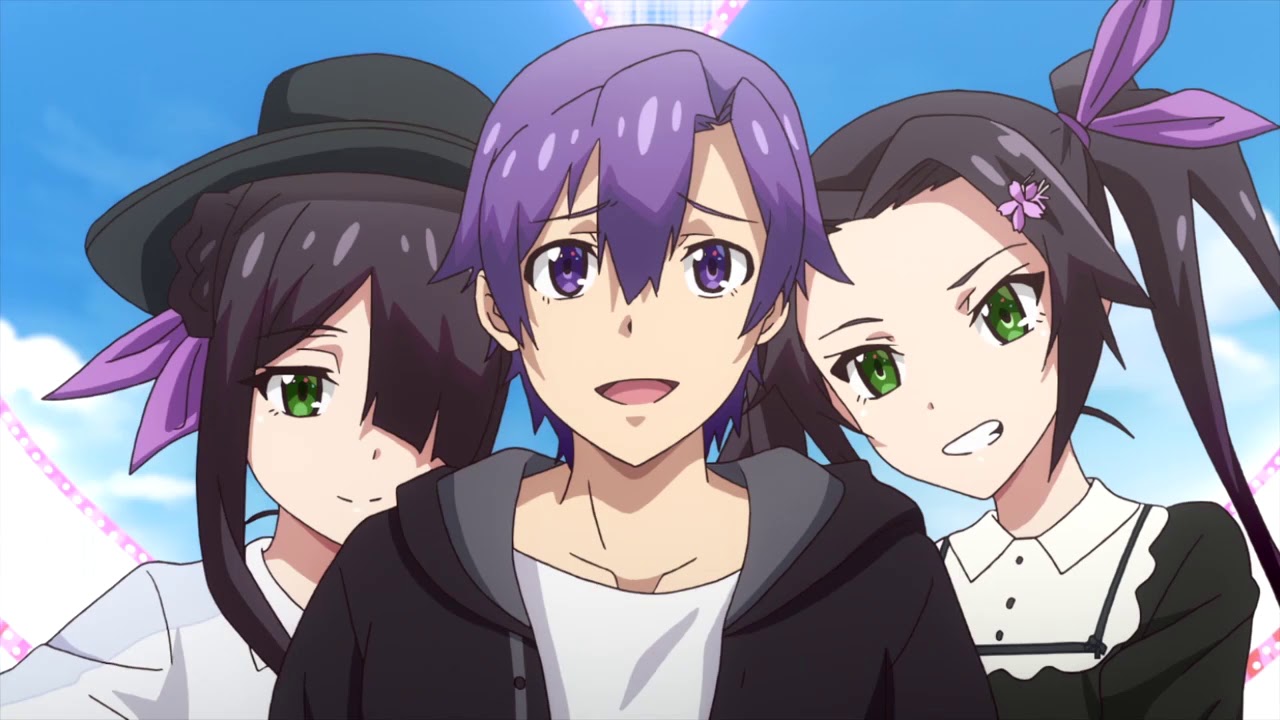 Its writing is awful, the storytelling is straight up non-existent, and the people it focuses on have less character development than a Chaturbate livestream. Every time I force myself to watch this show -- as I do my best to cover not just the good series in the anime realm -- I'm filled with much regret and in need of a good palate cleanser. Yet My Sister, My Writer tries its darndest to make it seem like it's a goofy fun time for all to enjoy. Well guess what: it's not goofy, it's not fun, and it's certainly not a good time consumer!

Do you know who I feel bad for the most over this piece of garbage? The animators. After all is said and done, the crew over at NAZ (My First Girlfriend is a Gal) and Magia Doraglier will never want to work in anime again. I'm sure you've seen firsthand how horrible the animation has gotten after the first episode aired. They even took a week-long hiatus in-between airings, and somehow returned with the series looking even worse than it was before the break! From the awful facial animations to the literal cries for help in the end credits, everything visual about My Sister, My Writer is as disgusting as Tumblr's recent post guidelines. 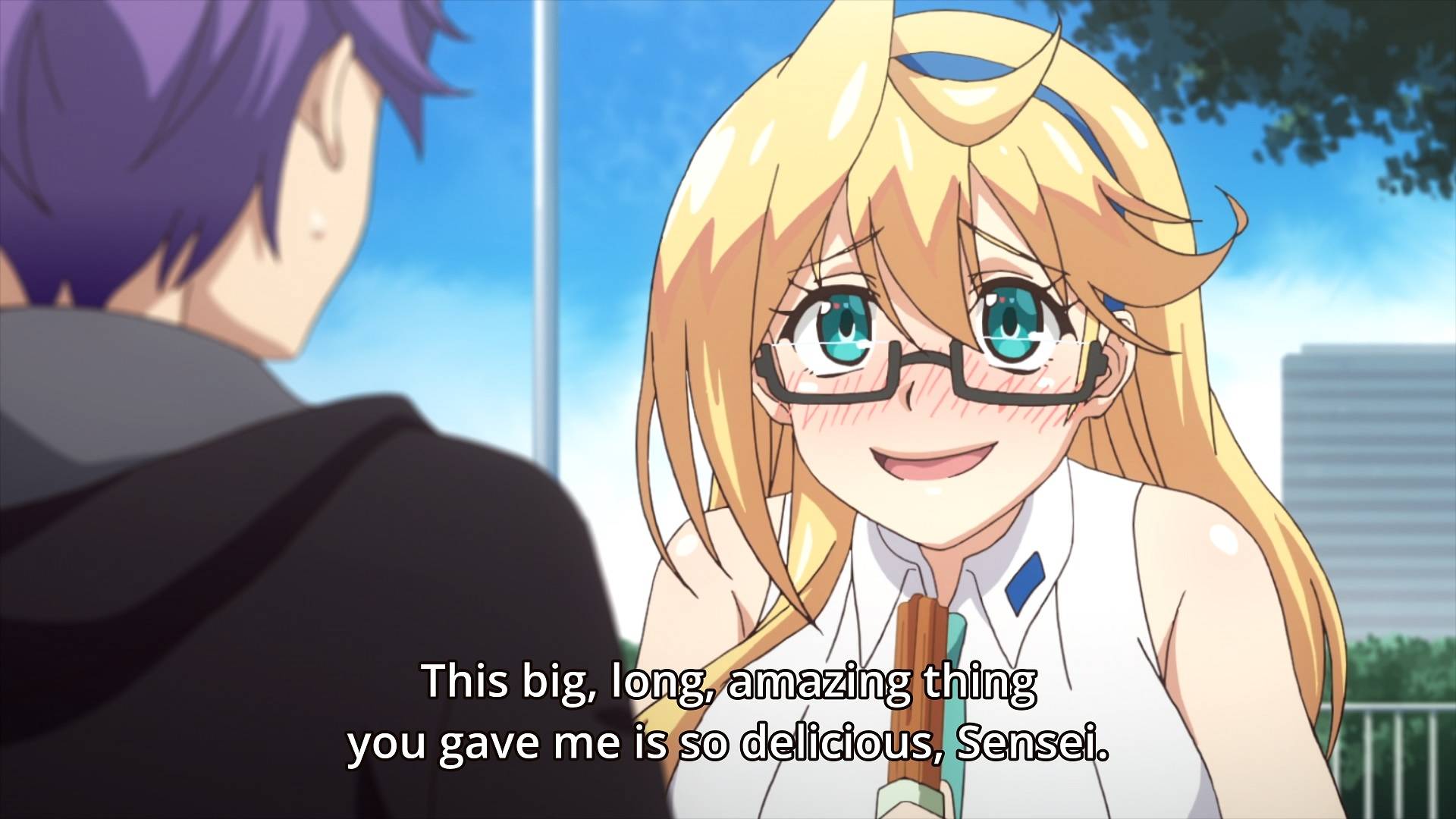 Then there's the voice acting. Hatanaka whines a lot as Yū, sounding more like some Drake & Josh caricature than a real high school student. Kondō's Suzuka comes off as a complete brat, but does get the little sister aspect down okay. Akasaki's Ahegao W Peace Sensei can sometimes be a saving grace with her inappropriate comments, but it's all just fluff for a cheap laugh. So I guess that the performances aren't awful; they're just narrowly bad.

Also causing some sort of pain in my senses is the score by Yashikin. I don't know which street the producers pulled this guy off of, but it sounds like the composer got paid $15 and a meatball sub to make some random sounds on a keyboard. It's the equivalent of letting a young chimpanzee grab hold of an instrument and pressing the record button, it's that cringe-worthy. Opening theme "Secret Story" by Purely Monster is...actually kind of cute, so it's probably the only aspect of My Sister, My Writer that's remotely good. End theme "Ki・Shōu・Ten・Ketsu・Jo・Ha・Kyu" by Junjō no Afilia is not that decent, being as forgettable as the rest of the characters that I didn't even bother mentioning in this review.

As you can plainly see, members of the anime industry, My Sister, My Writer is all kinds of awful. It's not even the sort of terrible that's fun to watch for irony's sake; it's just straight-up deplorable. The production nightmares and the uninspired writing should serve as a cautionary tale as to why you should never, ever adapt stories surrounding a sibling trying to date another sibling. It's gross, the people who write it are gross, and the people who bought enough of the original light novels to make it into an actual anime series should be ashamed of themselves!

My Sister, My Writer can be viewed on Crunchyroll and VRV. Episodes 1-10 were observed for this review. Promotional consideration provided by Crunchyroll.