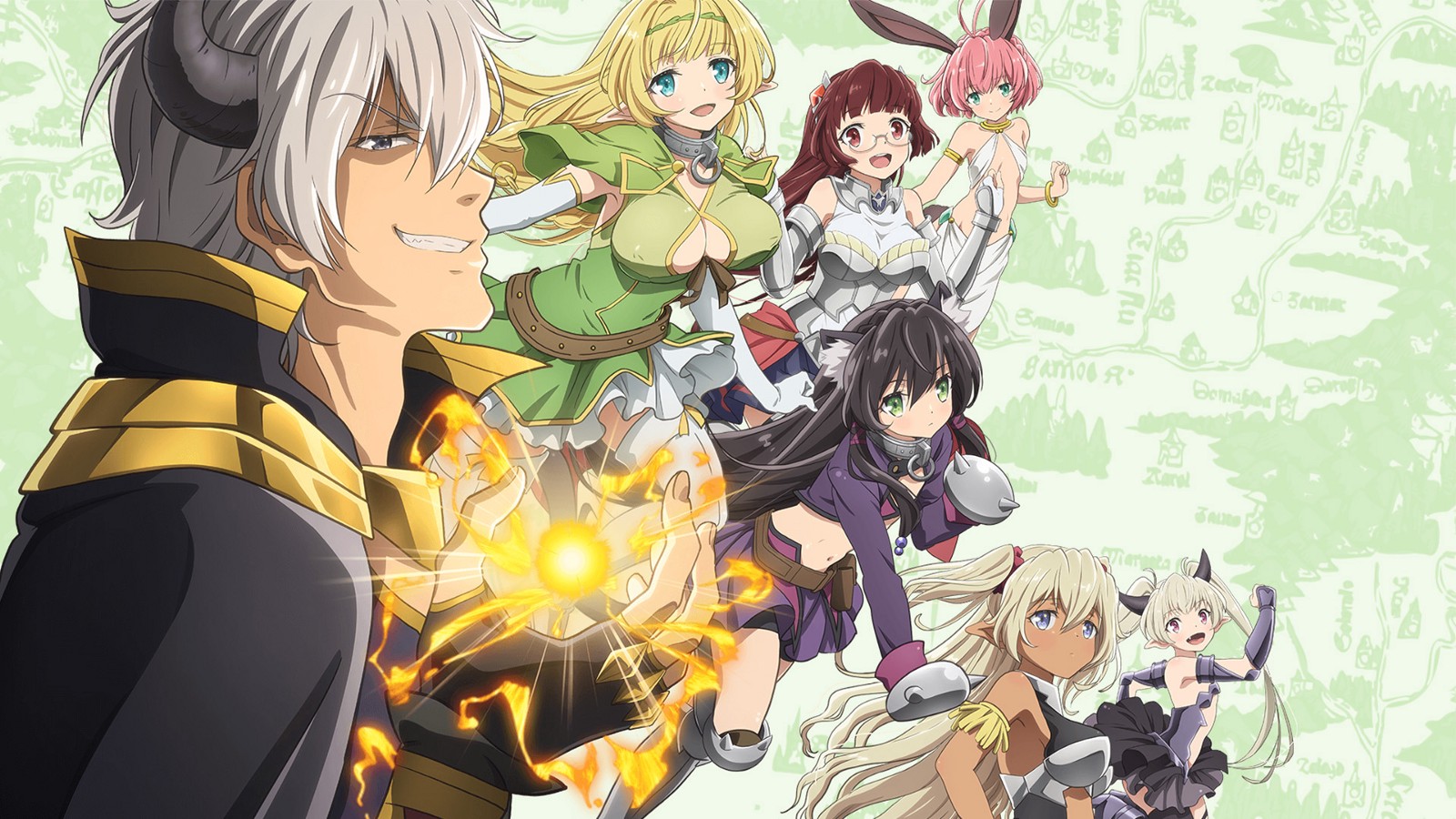 These days, you can't go one anime season without some sort of isekai show. The concept of a main character being transported to another world has been done so many times over, that this reviewer has lost count of how many there have been these last few years. Some isekai are fantastic (KonoSuba, No Game No Life, Overlord), and other are just really bad (Death March to a Parallel World Rhapsody, In Another World With My Smartphone). This summer's latest isekai, however, somehow takes that formula and makes it both refreshing and hugely entertaining. That anime is How NOT To Summon A Demon Lord.

Based on Yukiya Murasaki's popular light novel series, How NOT To Summon A Demon Lord takes a hardcore gamer and places him into a world similar to his favorite MMORPG Cross Reverie. In the guise of his character Diablo (Masaaki Mizunaka/Eric Vale), the introvert suddenly finds himself in the presence of the two women who summoned him: the cat girl Rem (Azumi Waki/Jad Saxton) and the elf maiden Shera (Yū Serazawa/Sarah Wiedenheft). When the two accidentally place an enchantment on each other due to Diablo's surprisingly overwhelming power, the girls find themselves his slaves, with matching collars to boot! While in the guise of Diablo, the newcomer to this magical world decides to help the two rid themselves of their enchantment, as well as one other bothersome tick that Rem has hidden from those close to her. 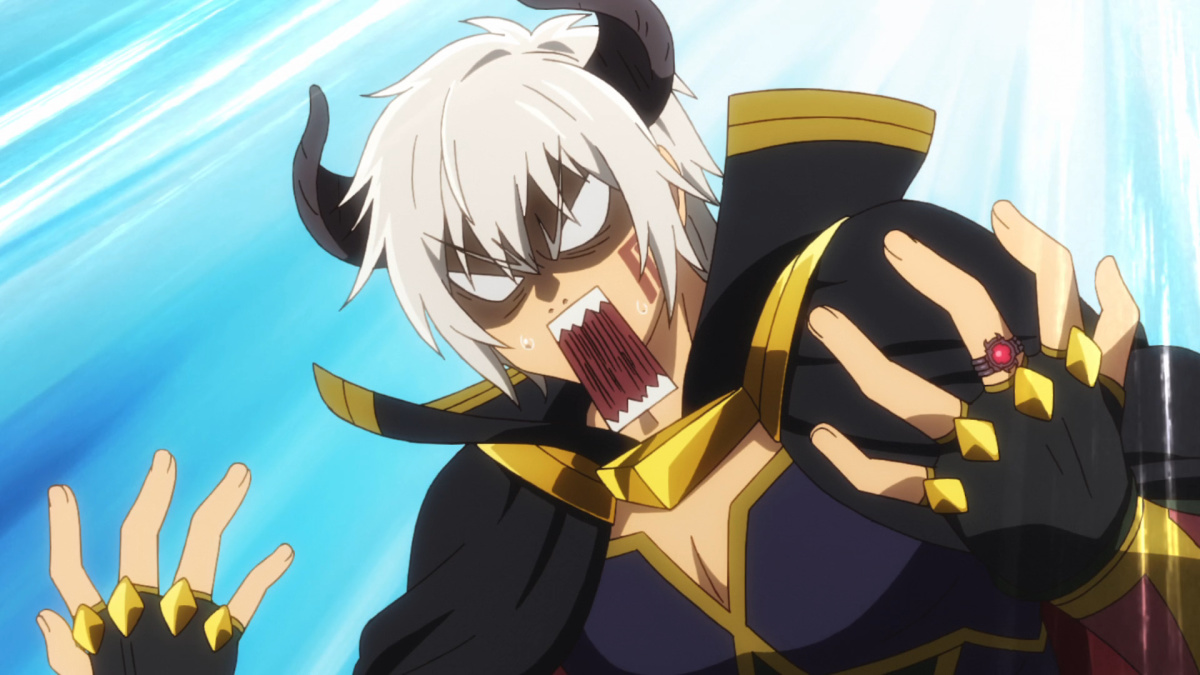 While roaming around the medieval world, Diablo finds himself comparing the lands to his favorite video game. At times, he uses his nerdy knowledge to his greatest advantage, laying waste to opponents and various threats to the city of Faltra. However, he often finds himself in an internal battle with his social anxiety, and while he manages to put on the tough guy act for a good amount of time, it's when he's about to crack when his true self starts to show. Fortunately, his powerful spells and attacks help to keep that rough exterior protecting the more shy interior that's kept closed off from the rest of the crew.

It's this mentality that helps to make How NOT To Summon A Demon Lord a surprisingly relatable series. Hearing how mentally exhausted Diablo gets after talking for long periods of time or whenever he uses too much magic places him at a down-to-earth level that helps to ring similar feelings from its viewers. As one who deals with social anxiety, I often see myself in Diablo when he needs to recluse himself a bit from the outside world after a long battle. While I wouldn't say there'll be many "looking at myself in the mirror" kind of moments, there's indeed a level of relatable conflict that Diablo deals with on a daily basis. 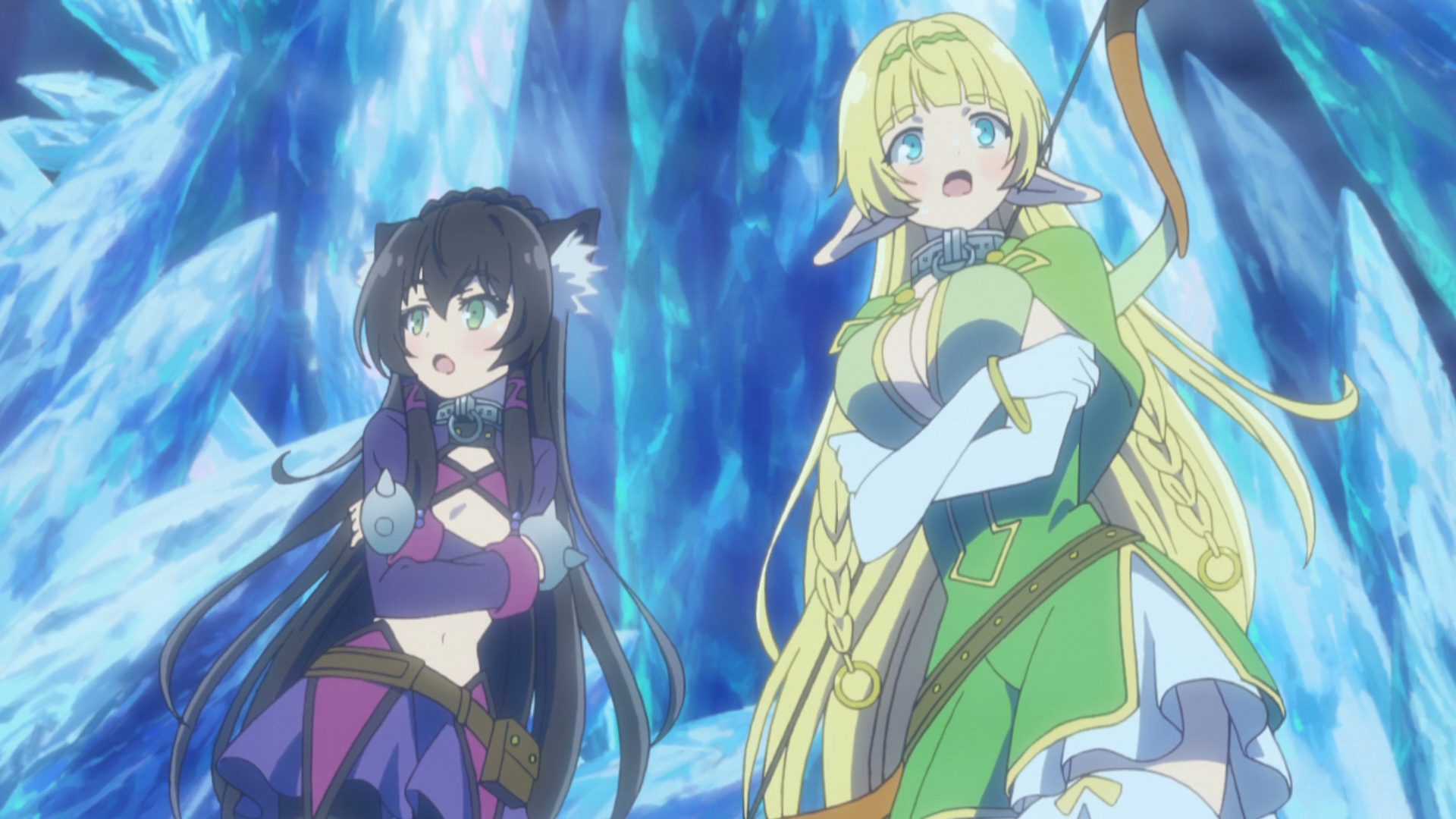 From an action/drama perspective, it's very surprising how well the series does with delivering some high octane action and deep character development. Watching Diablo lay waste to many foes -- from drunken wizards to jealous elvish princes -- never gets old, as his seemingly invulnerable self gets out of one complicated jam after another with either an explosive finale or a bit of dumb luck. However, what impresses me more is how these characters are treated throughout the story. There's a lot of depth to be found in the main three, with Shera's need to branch from her kingdom to become an independent woman and Rem dealing with a locked demon deep inside her.

With that being said, it's when the anime's funny bone is in full view when this series goes into full gear. Whether it's hearing Diablo's internal monologue or watching him bleed out of control when signing up to become an adventurer, the writing and sight gags are simply a joy to bear witness to. However, it's when the show gets a tad perverted when the comedy reaches gold standard. Yes, some viewers will roll their eyes when a psychotic prince unleashes a clothes-eating slime monster on his sister or when Diablo wakes up with his hands accidentally all over Shera & Rem's breasts, but it's the punchlines that follow that help boost the naughtier comedic aspects to a higher standard. 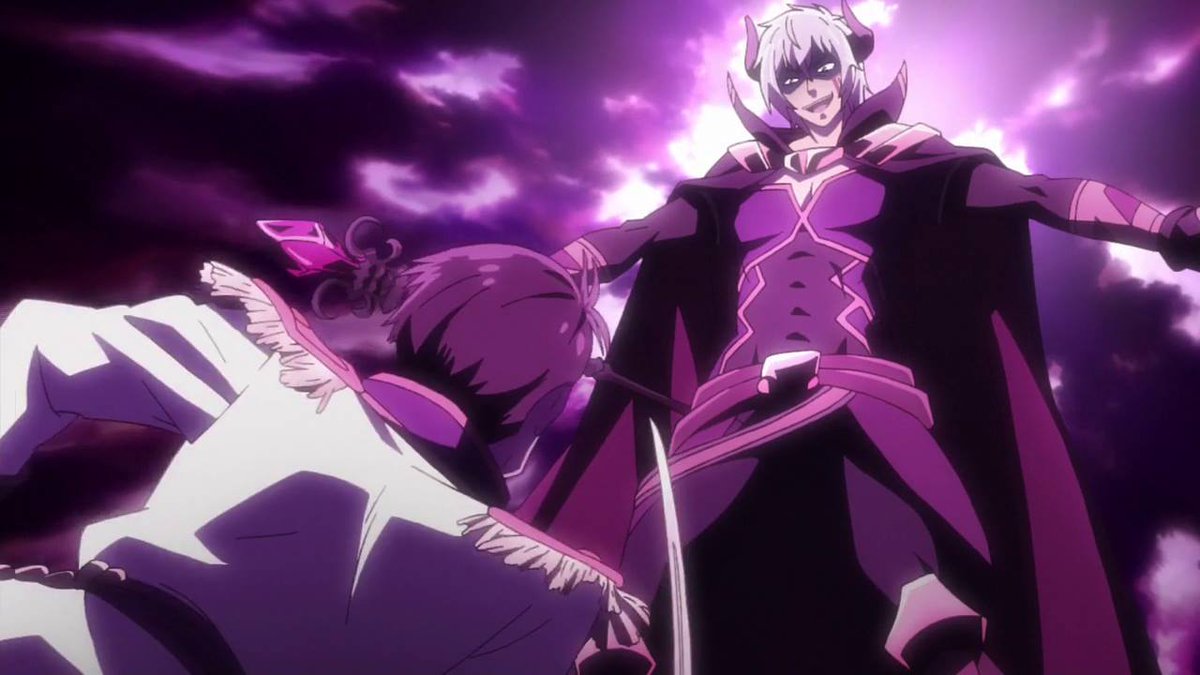 Much of the humor in How NOT To Summon A Demon Lord is delivered well thanks in part to its voice cast. On the Japanese side, Mizunaka's Diablo switches from tough guy to introverted wimp in seconds flat, delivering great roars when in serious mode and big laughs when his shyness kicks in. Waki's Rem pulls off a great mixture of timidness and sternness, showcasing her strengths behind the mic depending on the situation she's in. As Shera, Serazawa balances between a serious fighter and ditzy girl with wonderful results, with her more cheerful personality making it hard not to be the show's favorite to watch.

However, Funimation's English dub manages to one-up the original on many levels. Vale gets the tough guy part of Diablo down pat, but it's when he switches to a dorkier mentality in his inner monologues that adds a big dose of humor to the character. Saxton and Wiedenheft's pairing as Rem and Shera is just as strong as their Dragon Maid collaboration, with the latter shining brightly with a more adorable personality than her Japanese counterpart. A big part of what makes the dub work great is its script, tailored to English by Leah Clark (who also voices the bunny-eared quest-giver Sylvie). While there are some interesting vernacular choices (was "douchebag" even a word in ye ole medieval times?), what comes out of these characters' mouths are some of the zaniness and downright entertaining dialogue you'll find in any Simuldub this season. 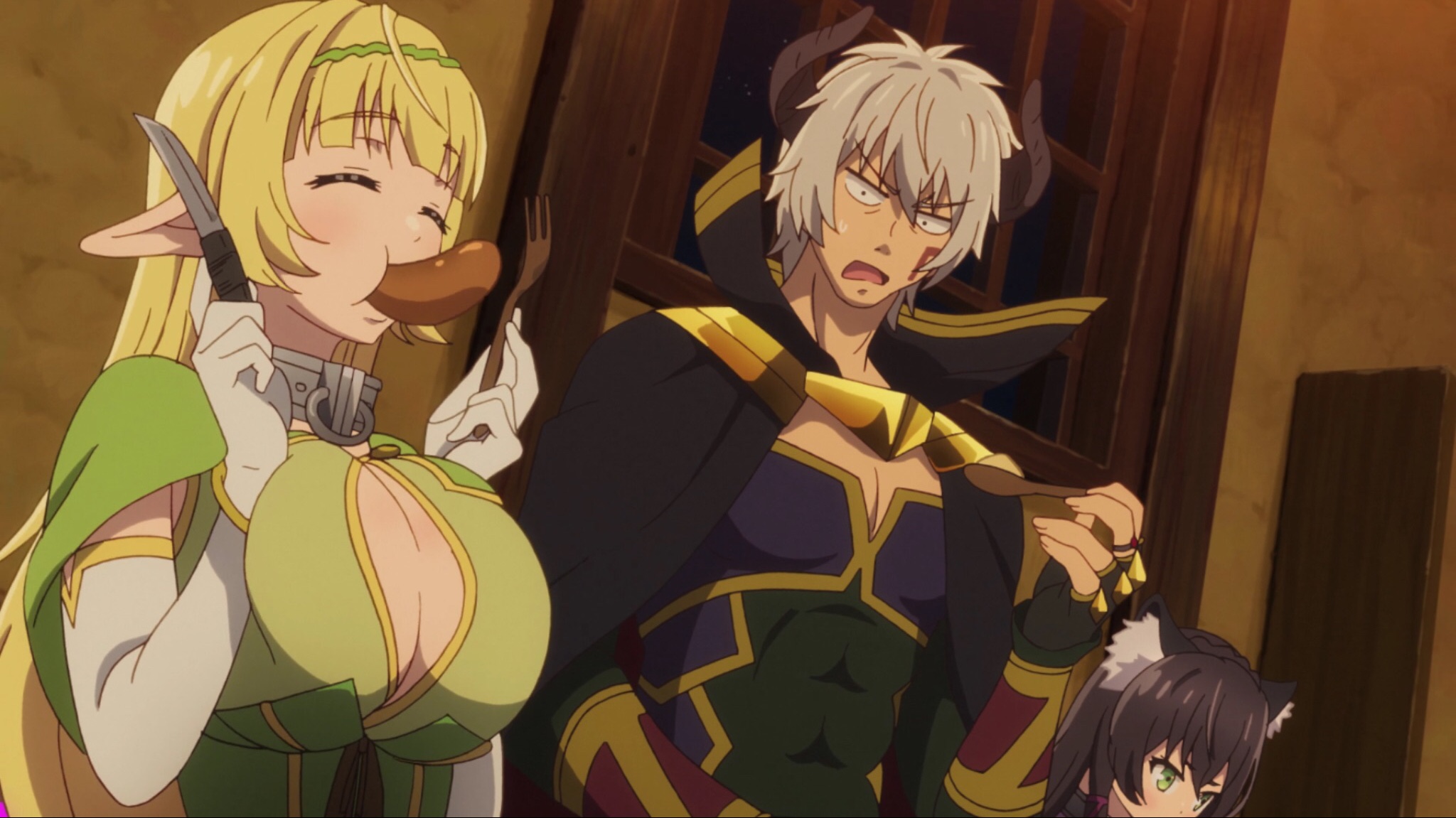 Aija-do Animation Works has a knack for making some great action anime, especially when it came to 2016's Izetta: The Last Witch. In How NOT To Summon A Demon Lord, the studio continues to crank up the action, especially when viewers bear witness to Diablo's super-powered attacks. No matter the scale, the animators always manage to make each new magical ability seem more epic than the last. There's also a great attention to detail placed in the show's visual humor, be it Shera's ungodly-sized knockers or Diablo's introverted reactions to his unfortunate "accidents" and "mishandling" shenanigans. It also helps that the characters' visual aesthetics give each of them their own unique stylings that make each one stand out from one another.

A newcomer to the soundtracking realm, Yusuke Kato presents a hefty balance of loud orchestrations and silly melodies for each of the anime's different mood points. While the heavier tracks can be somewhat run-of-the-mill during the action scenes, the lighter ones manage to play up the humor towards far greater heights. Opening theme "DeCIDE" by Summoners 2+ (who consist of the main female voice cast) embraces the more action-based aspects of the anime, crafting an exciting song to pump oneself up for a battle. On the other end of the spectrum, end theme "Saiaku na Hi demo Anata ga Suki" by Serizawa is so cutesy that it may cause diabetes after multiple listenings.

How NOT To Summon A Demon Lord delivers a great heaping of action, well-timed comedy, and a unique protagonist that feels more relatable than most isekai characters. Its balance of drama and perverted goofiness also helps make it one of this season's most entertaining shows, all capped off with a memorable voice cast from both side of the ocean. Despite it following the usual formula, How NOT To Summon A Demon Lord manages to add just a couple sweeter ingredients to this other worldly cake that make the end product too enticing to pass off. Swear allegiance to Diablo at once, even if he may be too shy to acknowledge your presence.

How NOT To Summon A Demon Lord can be viewed on Crunchyroll, FunimationNOW, and VRV. It has been licensed by Funimation. Episodes 1-8 were observed for this review. Promotional consideration provided by VRV.