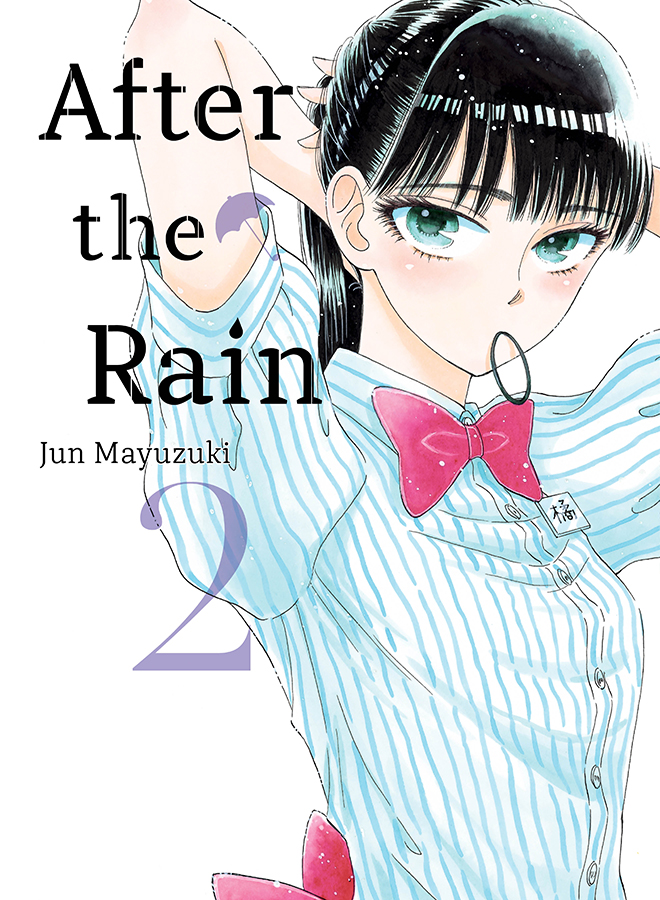 There's a certain magic that engulfs Jun Mayuzuki's After the Rain. The premise of a high schooler falling in love with her much older boss may turn off most readers, but how it's handled is something of a miracle. Its first volume managed to take the concept, fill it with as much heart & spirit as possible, and proceed to top it off with a whole lot of charm and warmth. These feelings and tone continue onward in its second volume, giving way to a hidden meaning behind its tale.

Jumping back where the first volume left off, After the Rain has Akira getting closer to her boss Kondo via any means necessary. Helping his son's hamster issue, picking up a book recommendation, and even convincing him to start texting, Akira starts to find her tactics start to work...until an awkward hug has Kondo blurt out that they're "just friends." Things go sour with her friendship with Haruka, who has found herself pushed away after the track incident that left Akira injured. Meanwhile a meeting with an old friend has Kondo slowly rekindling with his lost passion, giving way to a new surge in his life.

What started out as a strange one-sided romance between Akira and Kondo has blossomed into a story about lost loves, and not the person-to-person kind. Instead, readers slowly are finding out that the hole that is present in both these characters' hearts isn't something that love can fix; it's the job of one's goals and aspirations that's supposed to mend it back into one piece. While Kondo's meeting with his writing pal has begun this healing process, we've gotten to the point where Akira's issues have truly come to light, thereby beginning her true healing process.

Mayuzuki takes these sorts of aspects and brings them to life in a very mature manner. Rarely does it go the dopey route with these characters and simplifying problems and solutions. Finding the right answer is something far off on their pathways, and its appearance will come out of nowhere. One of the big problems that Akira has is her constant reminding of others that she's no longer a kid. Although she's seventeen, her mind has not yet matured when it comes to romance and social skills.

In a way, Akira sees Kondo as the elder prince there to rescue her princess self from all the troubles and doubts she has in the world. Despite Kondo saying he'll do what he can to help her, he in no way sees his young co-worker as a love interest. However, even after the "just friends" spiel, Akira still can't get that fantastical element of future romance with her boss out of her head. What Mayuzuki then demonstrates here is a sudden push towards realism in After the Rain when it comes to both romance and friendship, especially the latter when it comes to mending the bonds between Haruka and Akira.

All of this is captured strongly throughout the narrative, giving way to the likes of Akira, Kondo, and Haruka opening their shells to one another. It's not easy in the slightest for Haruka to open up to her friend the way she does at the summer festival, but it equates to one quickly ripping a Band-Aid off: it hurts like hell, but it needed to be done to continue the healing process. Like the narrative, the art in this volume stands out in all of its beauty, be it the presentation of a Super Moon or even the scenery close by to school on a hot summery day. (I also get a kick out of some of the facial expressions, which are reminiscent of some of Ai Yazawa's earlier works.)

The latest volume of After the Rain gives way to what the story is actually about, washing away any ickiness one may have with the age-gapped romance that it was seemingly starting off on. Its narrative and art give way to a beauty and warmth that will easily fill the heart of any reader that comes across Mayuzuki's tale. Even when the emotions pour as hard as a typhoon, After the Rain takes the path of a feel-good dramedy with the finest intentions and deepest symbolism on full display.