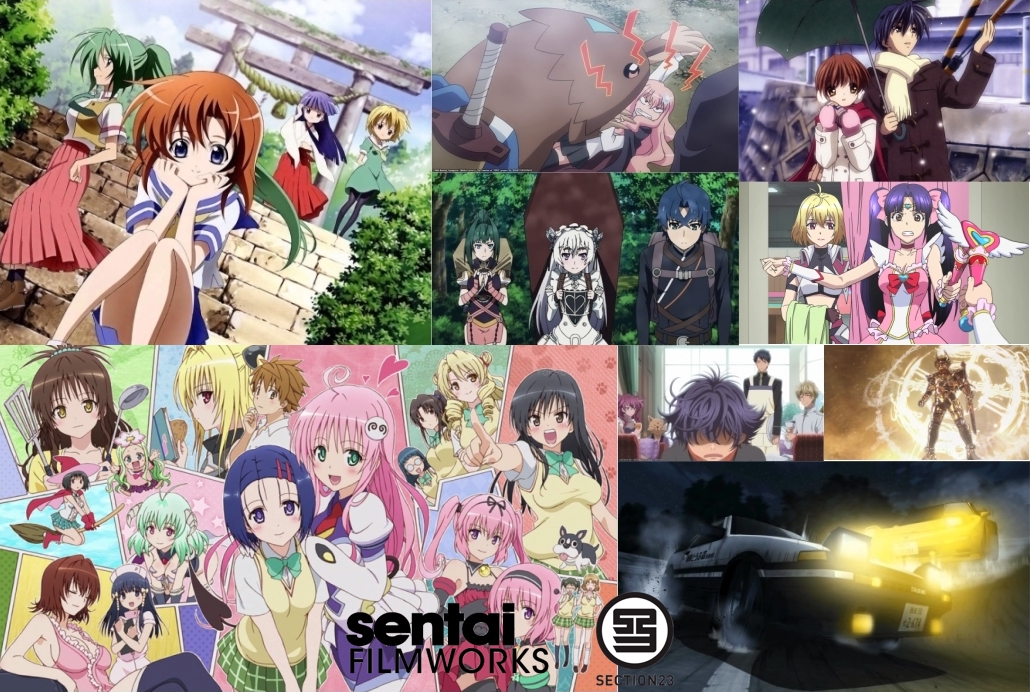 December is the time when things start winding down for the new year to slowly begin. It's also the fast-paced moment of holiday shopping, and Section23 Films has a few complete collections and new releases that'll be perfect stocking/yarmulke stuffers! (Yes, I know yarmulke stuffers are not a Hanukkah tradition, but neither was The Mensch on a Bench without the aid of some initiative!) 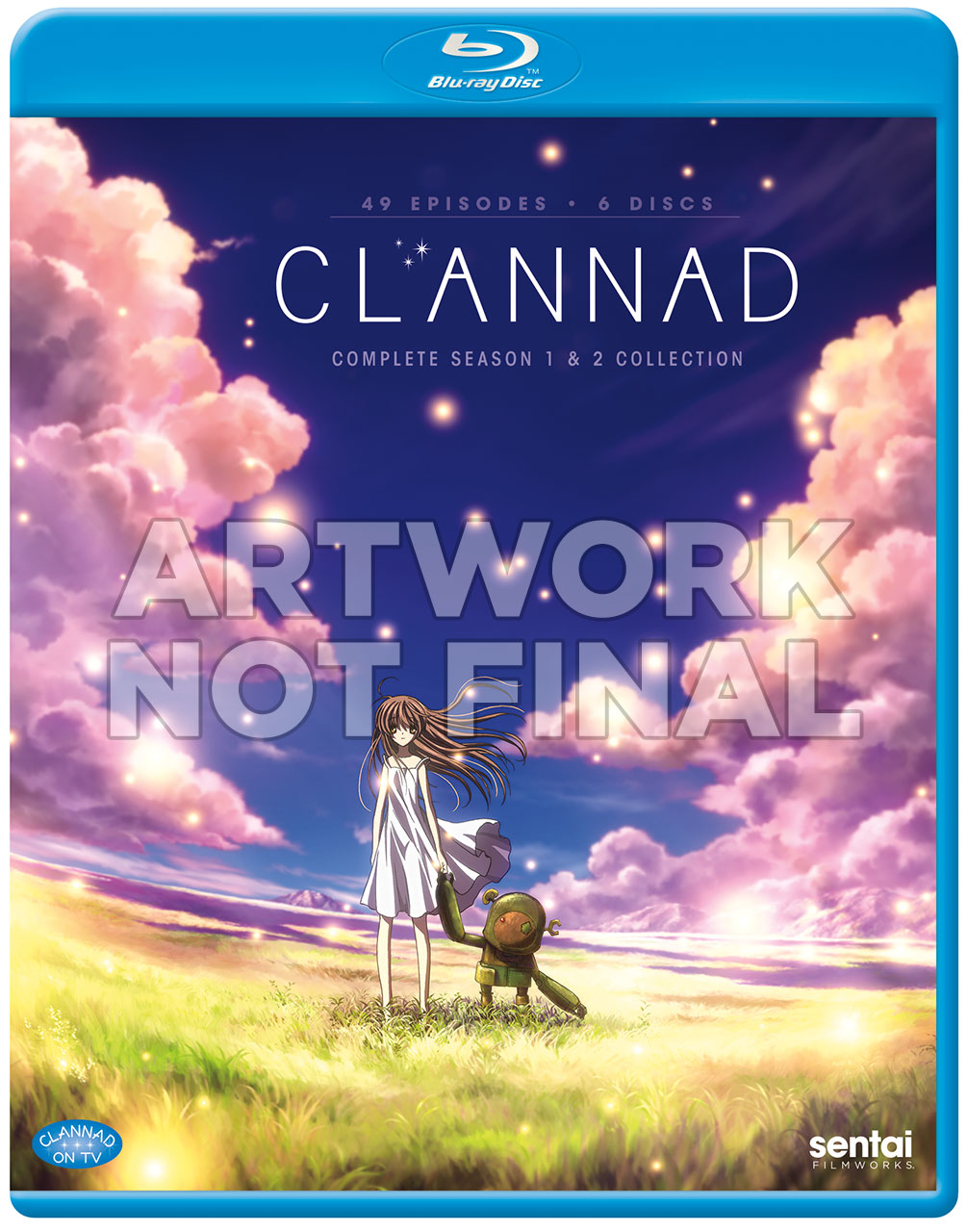 A trifecta of releases hits stores on December 5, starting with the complete collection of Clannad's 49-episode run. Tomoyo's life has been in a slump since the death of his mother. The declining health of Nagisa has been so bad that she's been forced to repeat a year of school. However when Tomoyo agrees to help Nagisa restart the school's Drama Club, they learn that if you find the right people to help you, you can get a second chance at happiness. Join the Tomoyo, Nagisa, the troubled genius Kotomi, and the mysterious Fuko as they discover the healing power of kindred souls and the will of the human spirit. 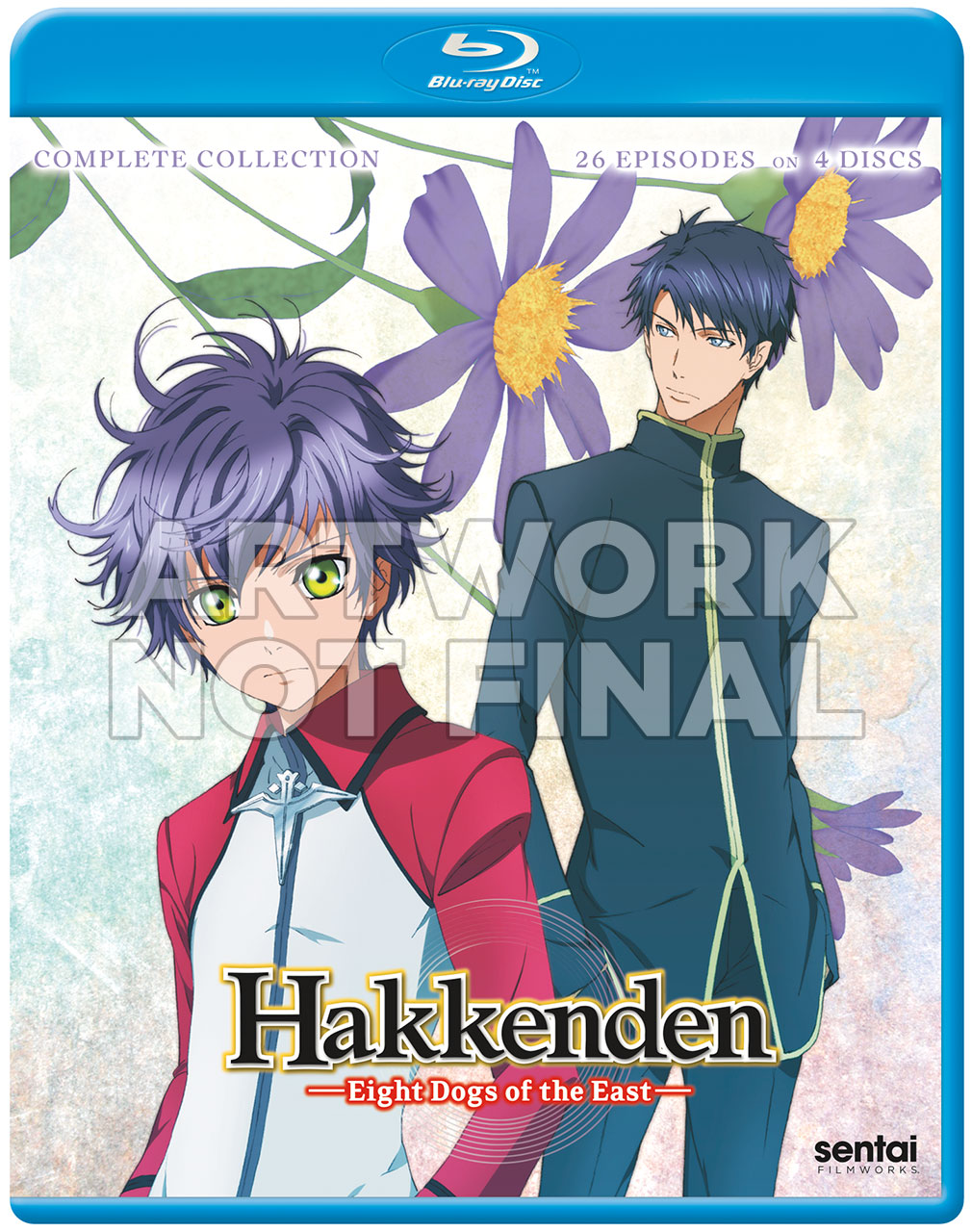 Two friends, two identical birthmarks. This marks the fate of Shino and Sosuke in Hakkenden: Eight Dogs Of The East, which is receiving a complete collection release. A fire destroys their village, leaving the two of them and Hamaji as the only survivors. Forced out into the world, they meet Genpachi and Kobungo, two soldiers who also have the same birthmark and whose confrontations with demons have left them irrevocably changed. On the run from the Imperial Church -- who is trying to capture Shino for his mysterious powers -- the unlikely quartet’s only hope for salvation lies in the secret behind their birthmarks, which will lead them to eight magical gems and their owners. 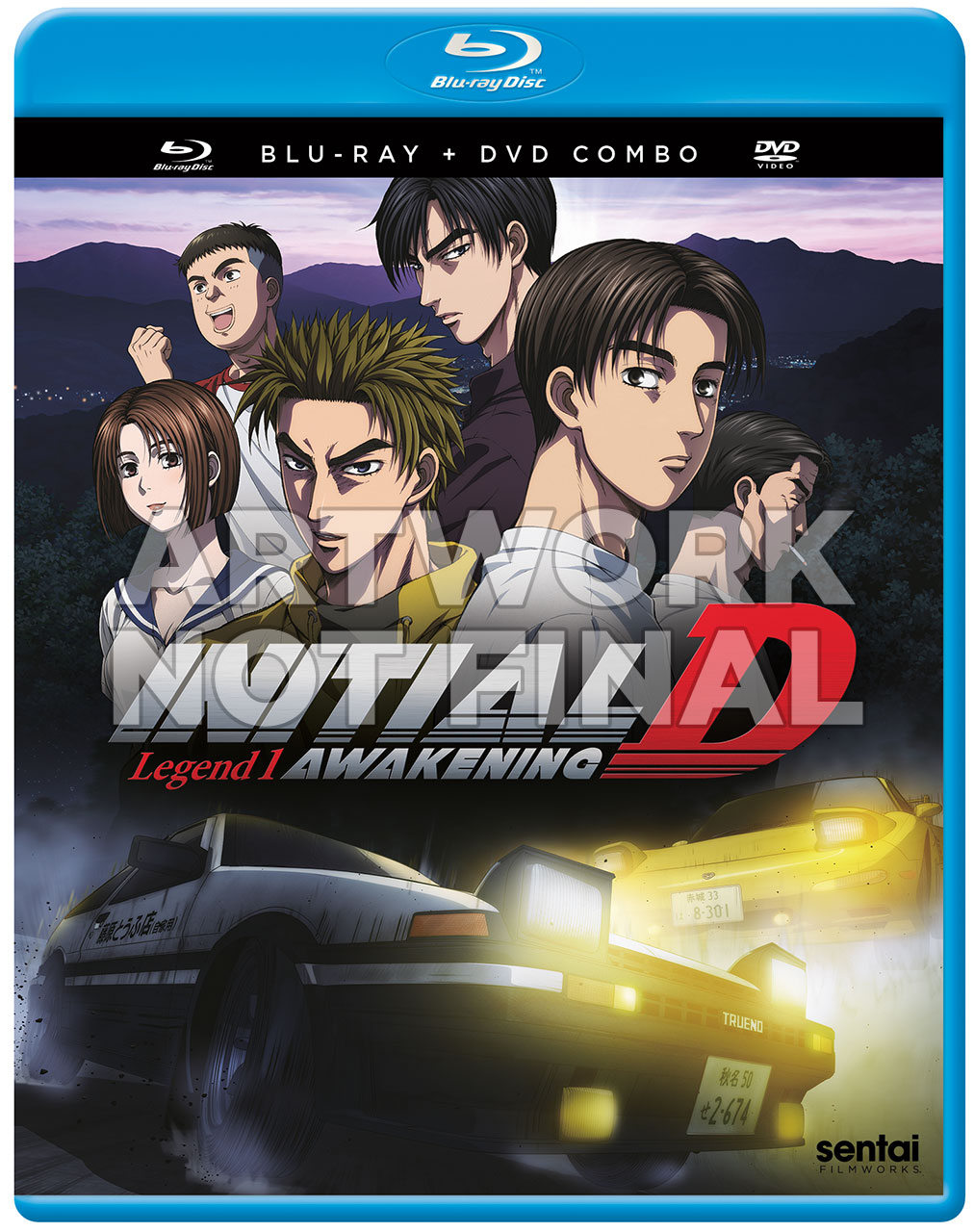 Get ready to put the pedal to the metal, as Initial D returns in the first of three new movies as part of the Legend trilogy. When aspiring racer Koichiro Iketani witnesses an unplanned street duel between Keisuke Takahashi, a member of a rival race team, and a mysterious Toyota Sprinter Trueno AE86, Koichiro's totally blown away by the skill of the 86's driver. What Koichiro doesn't know is that the driver is fellow gas station attendant Takumi Fujiwara, who was making a late-night tofu delivery for his father, a legendary Mt. Akina driver himself. Unforeseen events are about to springboard Takumi into the center of the street-racing world, turning the rivalry between Iketani's Akina Speedsters and Takahashi's Akagi Red Suns into an all-out street war! 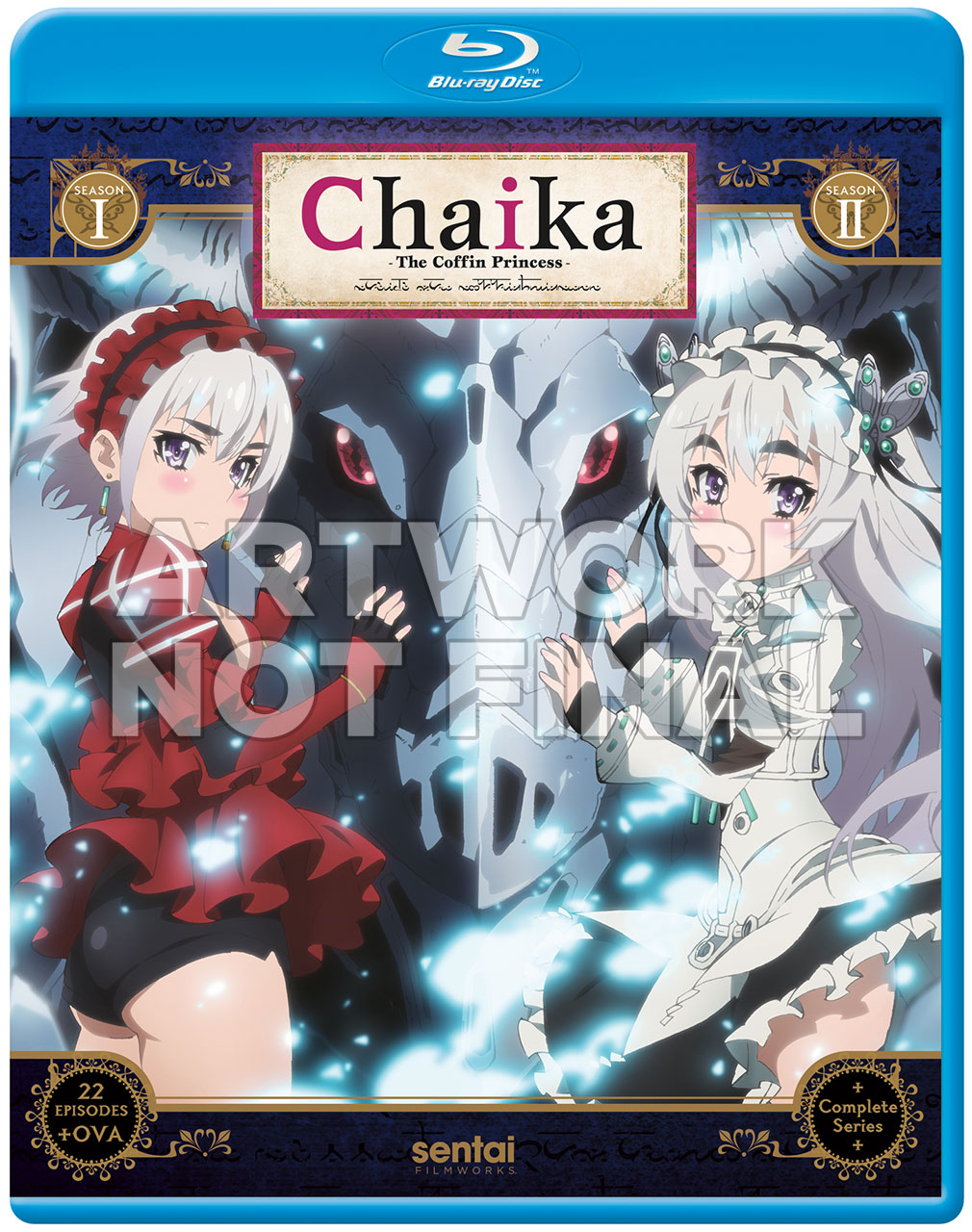 December 12 sees three more releases arriving from Sentai Filmworks and Kraken Releasing, beginning with the complete release for Chaika The Coffin Princess. The 22-episode and one OVA collection begins with the end of the Gaz Empire war, as the Emperor's body was cut into pieces and then carried off across the kingdoms. Without a war to fight in, it didn't take much convincing for unemployed saboteur Toru Acura and his sister Akari to join a coffin-carrying girl on her ghoulish mission of gathering those severed parts. But is Chaika the dead man's daughter, picking up the pieces for burial, or is there something far more sinister in the works? As rumors come forth of other, identical girls engaged in the same task, the winds of war seem to be stirring, and there are those who believe that rejoining the Emperor's scattered body could unleash a new nightmare! 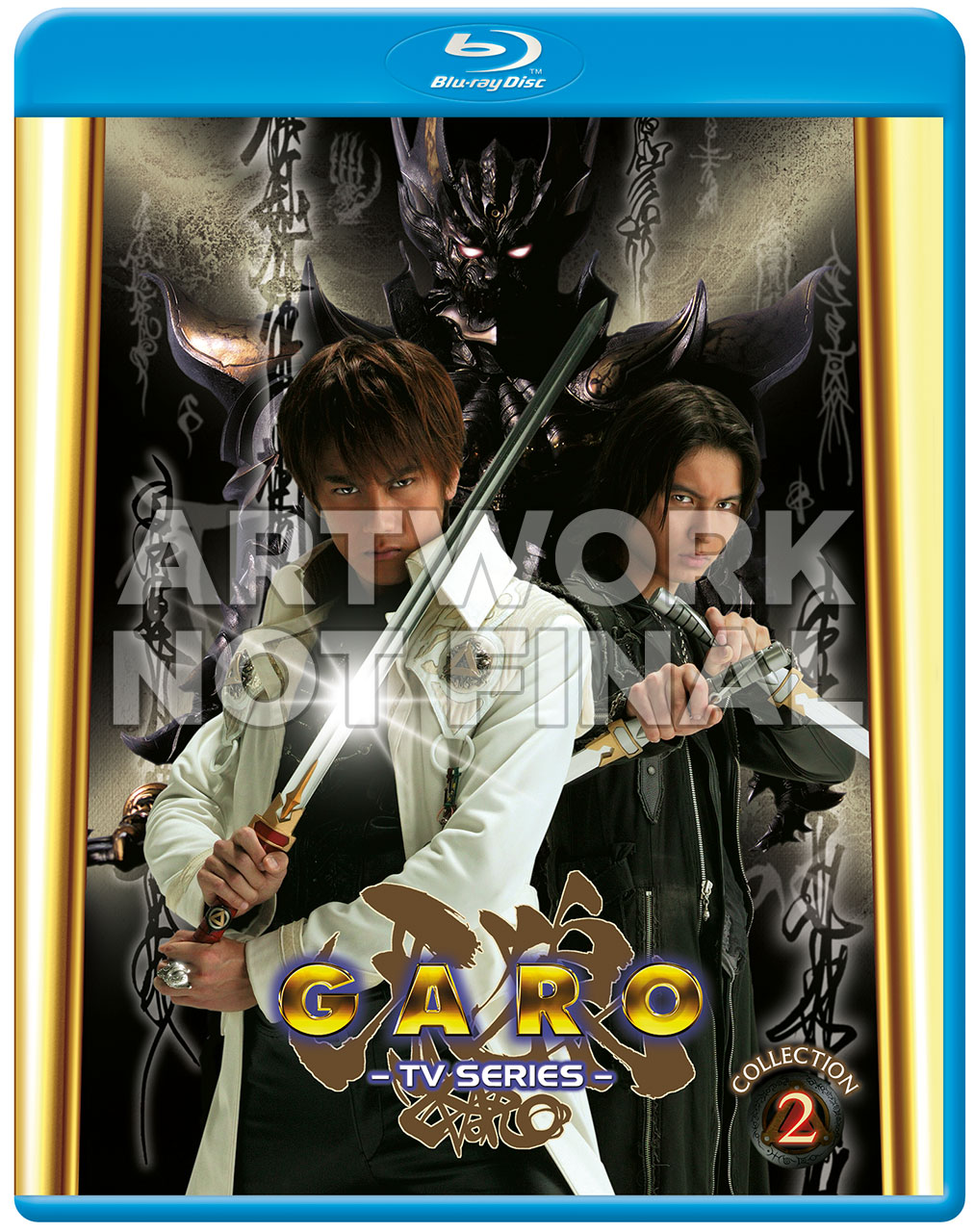 The second volume of the live-action Garo TV Collection arrives in the nick of time, merely two months after the release of the first volume. As Kouga and Zaruba continue to seek a cure for Kaoru's lethal exposure to Horror blood, the tension between the current wearer of the golden Garo armor and the wearer of the silver Zero armor, Rei, hits the breaking point. Was Kouga somehow responsible for the death of Rei's family? Why are the watchdogs forcing them to work together when they know what Rei believes? And meanwhile, will Kaoru's trusted advisor turn out to have the darkest secret of all? Friends die, love shatters, heroes fall, and monsters reign in the spectacular conclusion to this epic first season! 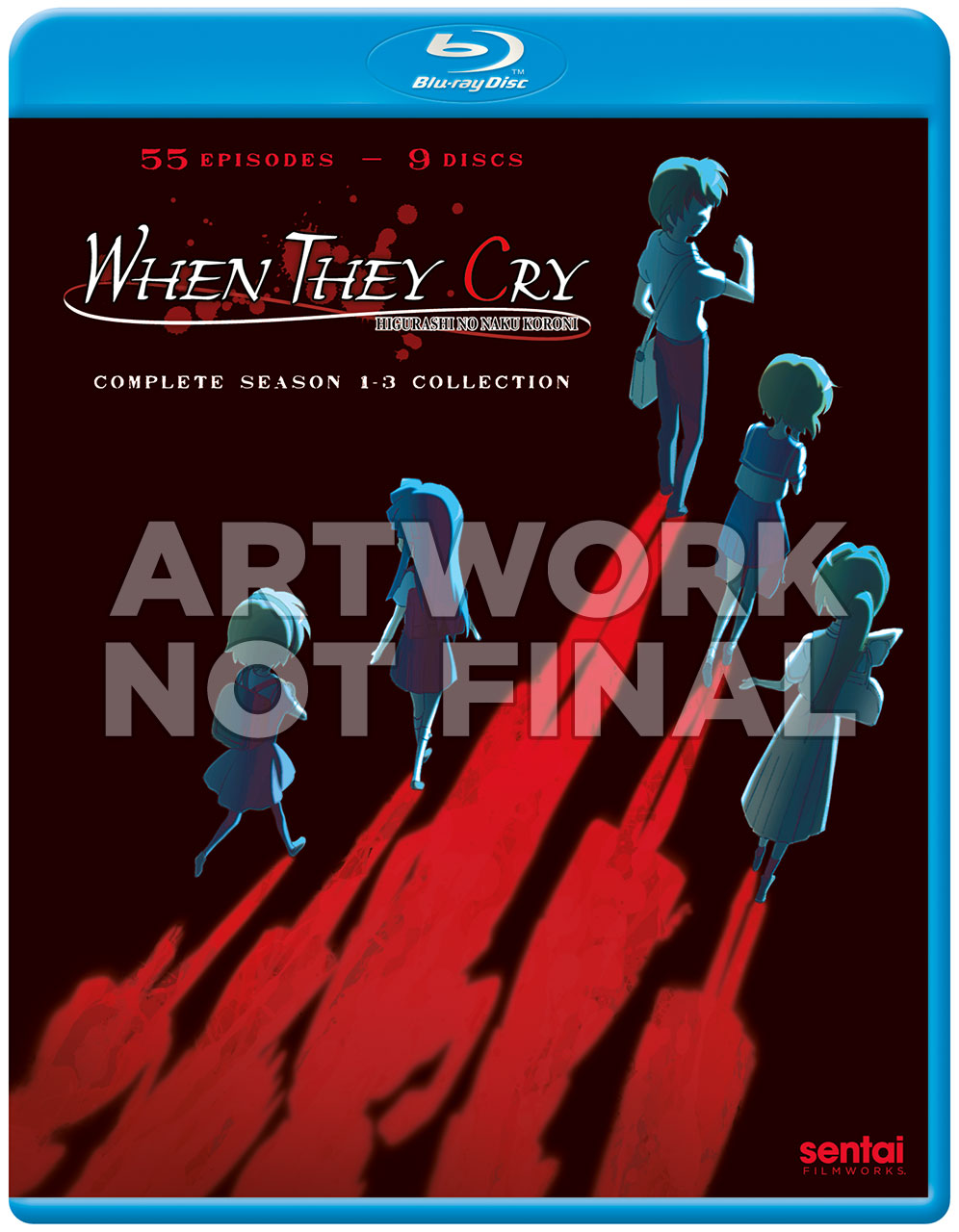 What could've easily been the death of moé is unleashed in a full-fledged complete collection with the Higurashi: When They Cry. Ever since Keiichi arrived in the picturesque town of Hinamizawa, he keeps discovering ominous happenings involving unsolved murders, disappearances, and mutilations. The worst part is that he can't be sure whether or not his new friends like Rena, Mion, Satoko, and Rika are aware of the events or involved in what's happening. All he knows is that it's not paranoia if someone really is trying to kill him, and escaping Hinamizawa alive may no longer be an option. The two seasoned and one OVA series of Higurashi: When They Cry is probably not the best idea for a holiday gift, unless you have a special yandere in your life... 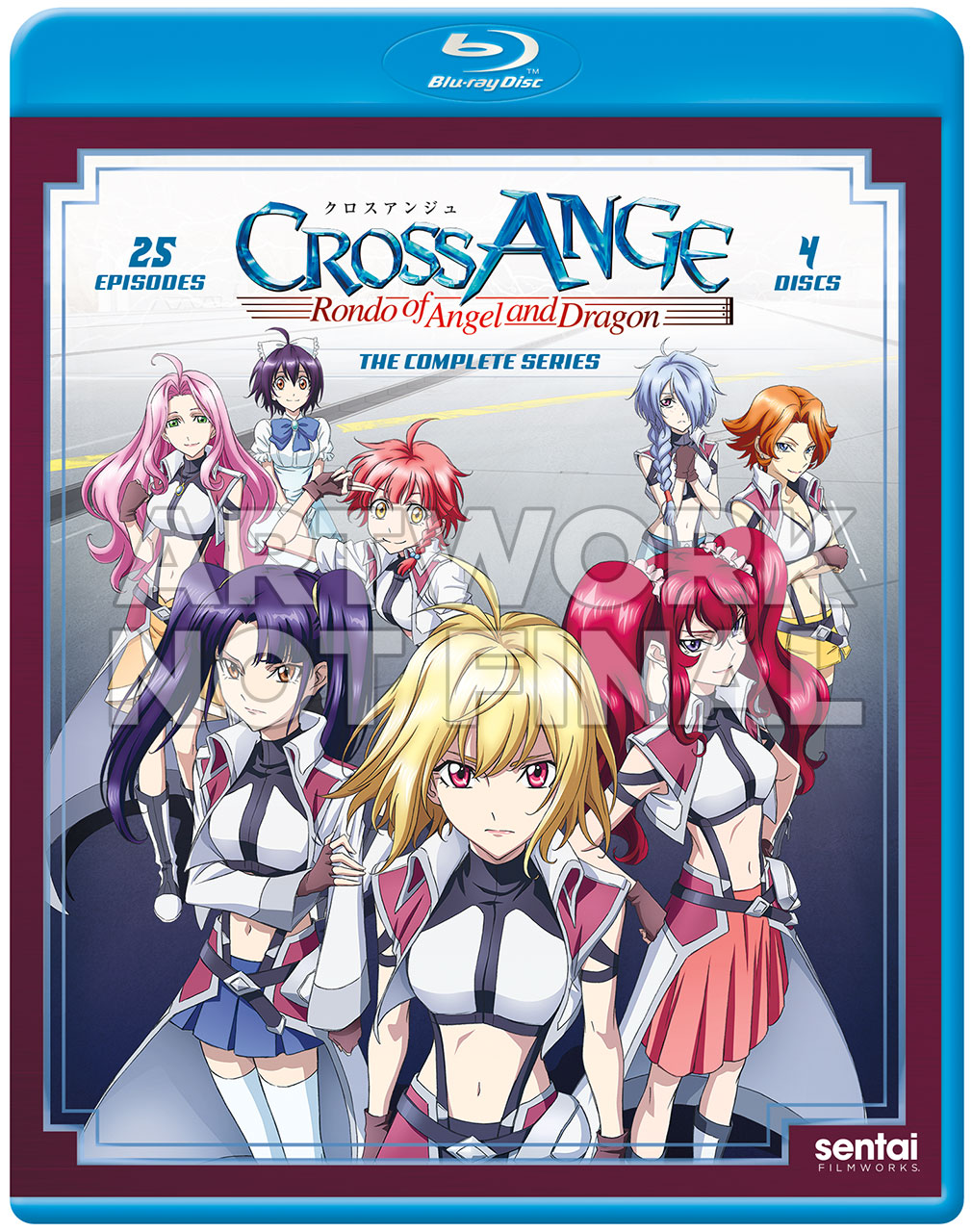 Cross Ange arrives with a complete collection on December 19, the first of three massive releases just in the nick of time for the Festivus shenanigans. Everything that Princess Angelise Ikaruga Misurugi of the Misurugi Empire thought she knew about her world was a lie, as she's betrayed, stripped of her birthright, and declared less than human. For the crime of not being able to use magic, Angelise has been sentenced to certain death as a slave-soldier. The girl -- now known as Ange -- is no longer an innocent Princess: she's learning how to kill draconic invaders, defending the same traitors who stole her life. However, they made a fatal mistake: they gave her access to an incredible weapon! 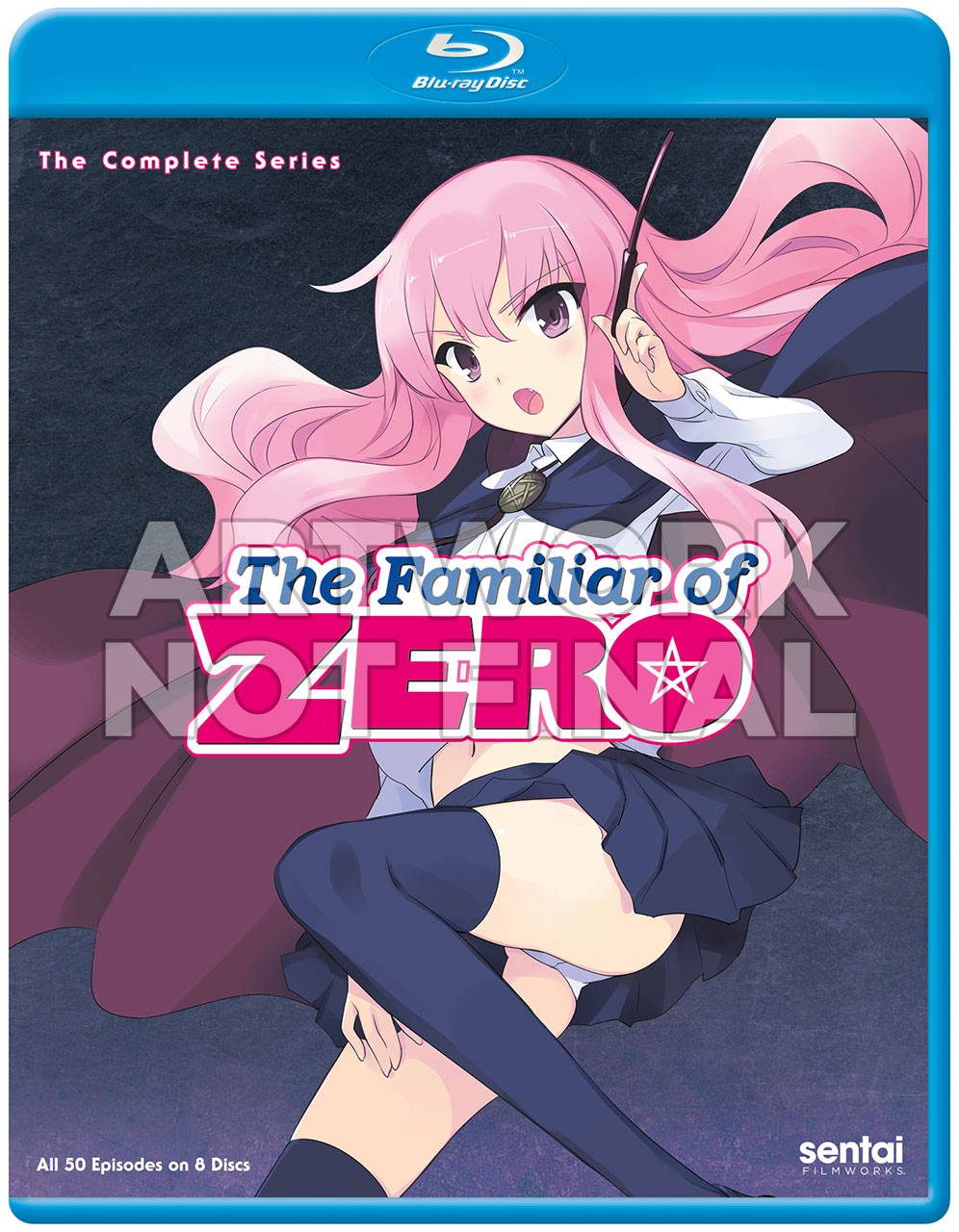 For something more magical and humorous, the complete collection of The Familiar of Zero will be just what you're pining for! Between her poor spellwork and long name, the other students at the Tristain Academy of Magic have taken to calling poor Louise Françoise Le Blanc de La Vallière, "Louise the Zero." Things only get worse when the students summon up their familiars, because while others receive fantastic creatures like dragons, Louise summons a normal teenager from Tokyo! While Louise may be stuck with Hiraga Saito, and Saito's stuck with the lousy life of being her familiar, maybe there's more going on than meets the eye. Maybe Saito's not quite as normal as everyone thinks, and Louise just hasn't figured out what she's good at yet. In fact, they might even have the makings of a great team once they start to get "familiar" with each other! 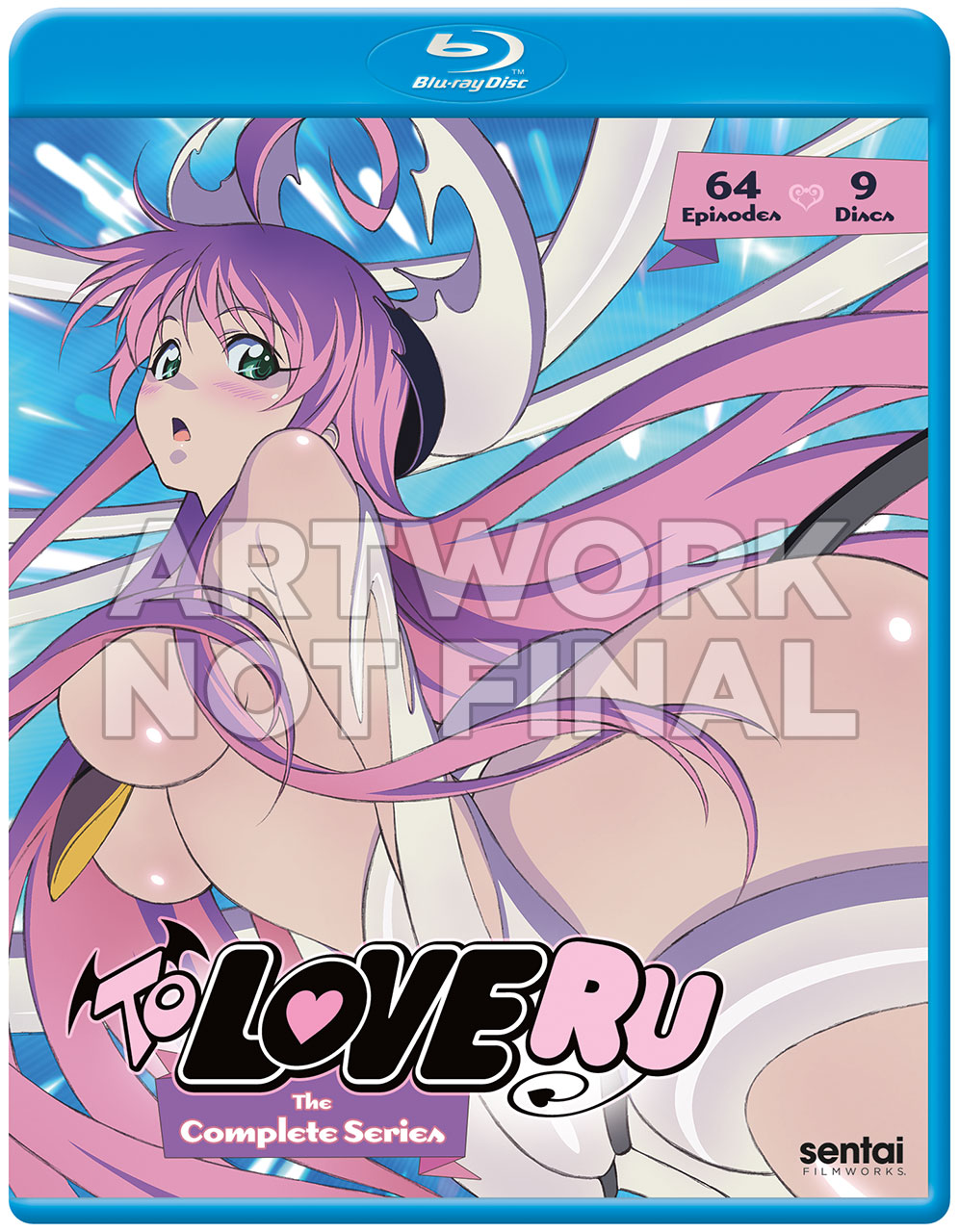 Lastly the big harem gets an even bigger release, with all 64 episodes of the To Love-Ru TV Series hitting Blu-Ray! Rito Yuki's washroom becomes the site of an unexpected close encounter, one that may cause the fabric of the entire galaxy to unravel! That's because fabric's the one thing that Princess Lala of Deviluke isn't wearing when she teleports into Rito's tub, and on Deviluke boobie-touching is a proposal of marriage. Suddenly Rito has an alien girl with a tail moving in, a potential father-in-law who looks like the Devil, and the chance to become the Prince of an alien planet...if he can survive all the challengers, rivals, assassins, femme fatales and alien hangers-on who start showing up on his doorstep!