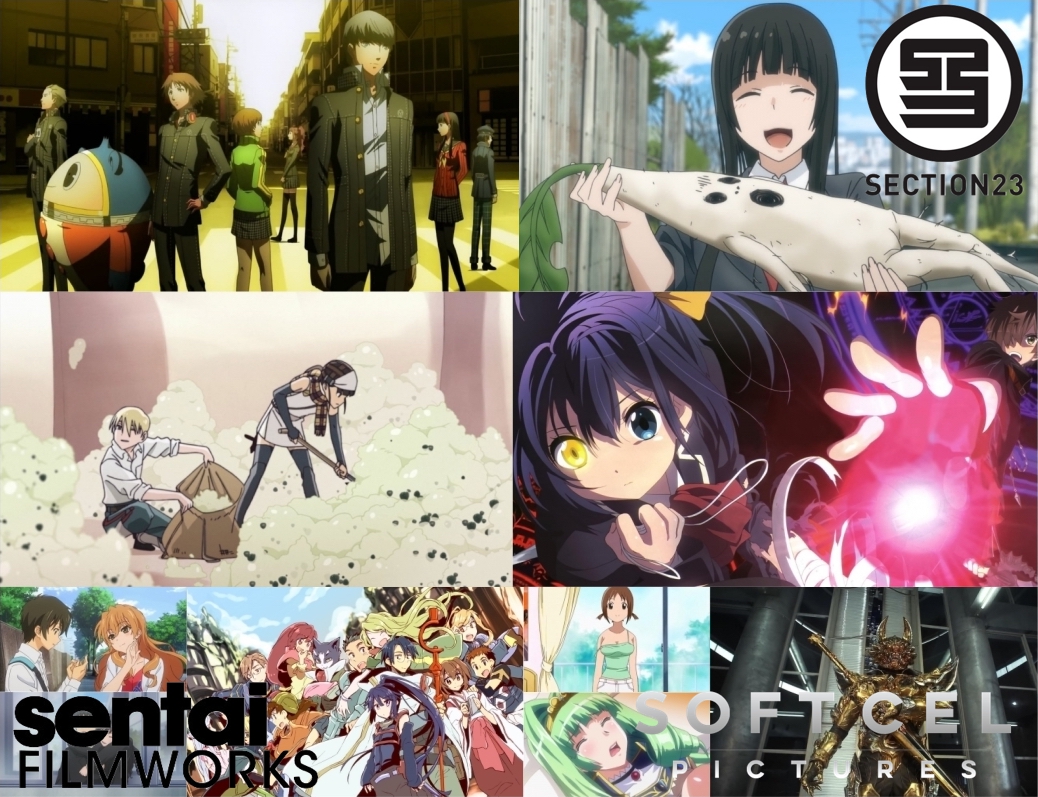 The fall season is all about bountiful crops, and like said crops the folks over at Section23 Films have prepared the October season with a plethora of releases that'll make you ready for the season of changing foliage. 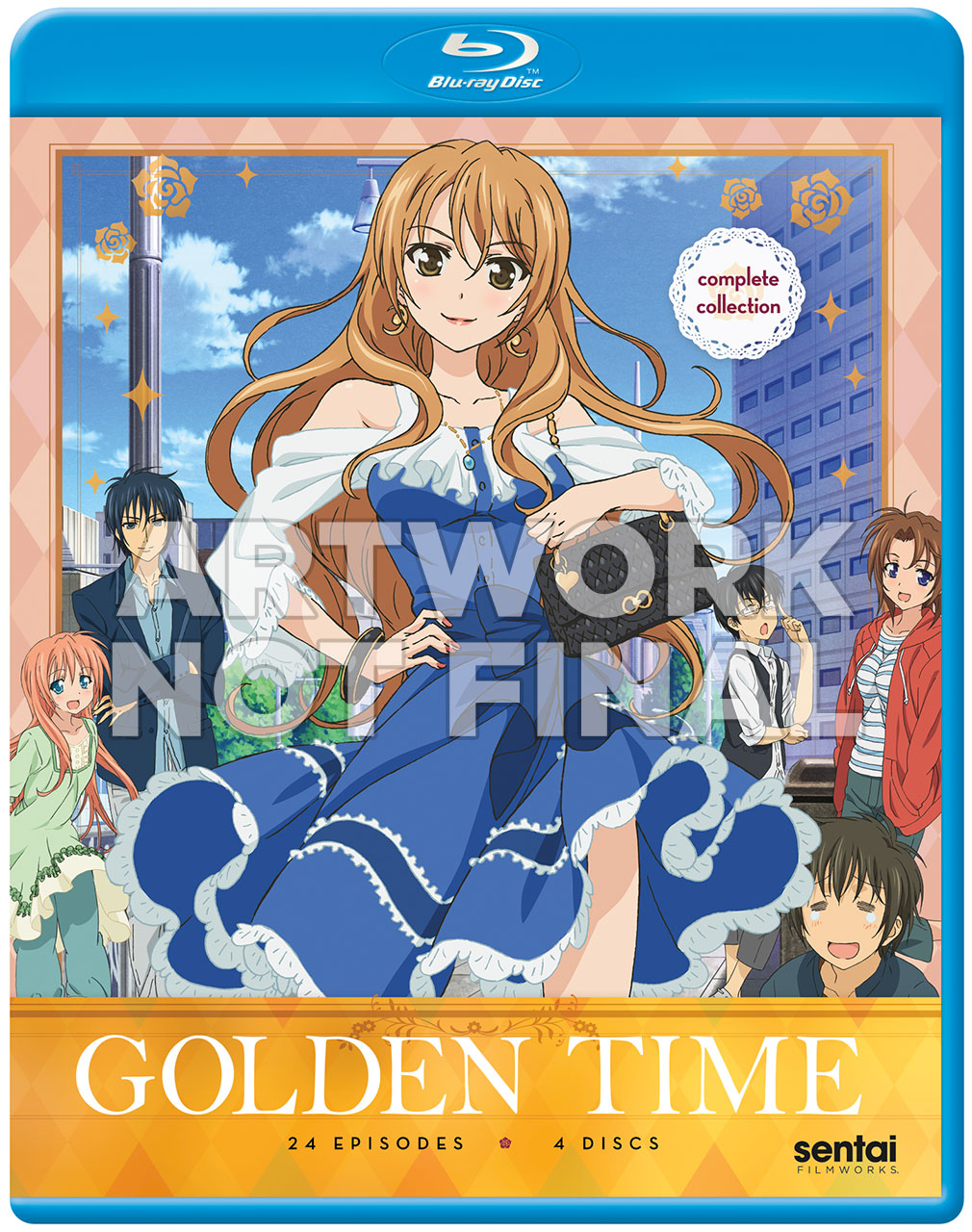 October 3rd starts things off with a complete collection release of Golden Time. Focusing on law student Banri Tada, he and his new friend Mitsuo set out to start a trouble-less life. Said trouble shows up in the form of Mitsuo's self-appointed future bride Koko Kaga, who makes an interesting first impression by slapping the hubby-to-be with a bouquet of roses. Things become more complicated after Banri and Koko decide to date one another, with the former revealing a shocking truth about his past self. It's love, comedy, and a sprinkle of drama in this acclaimed series from the creator of Toradora! 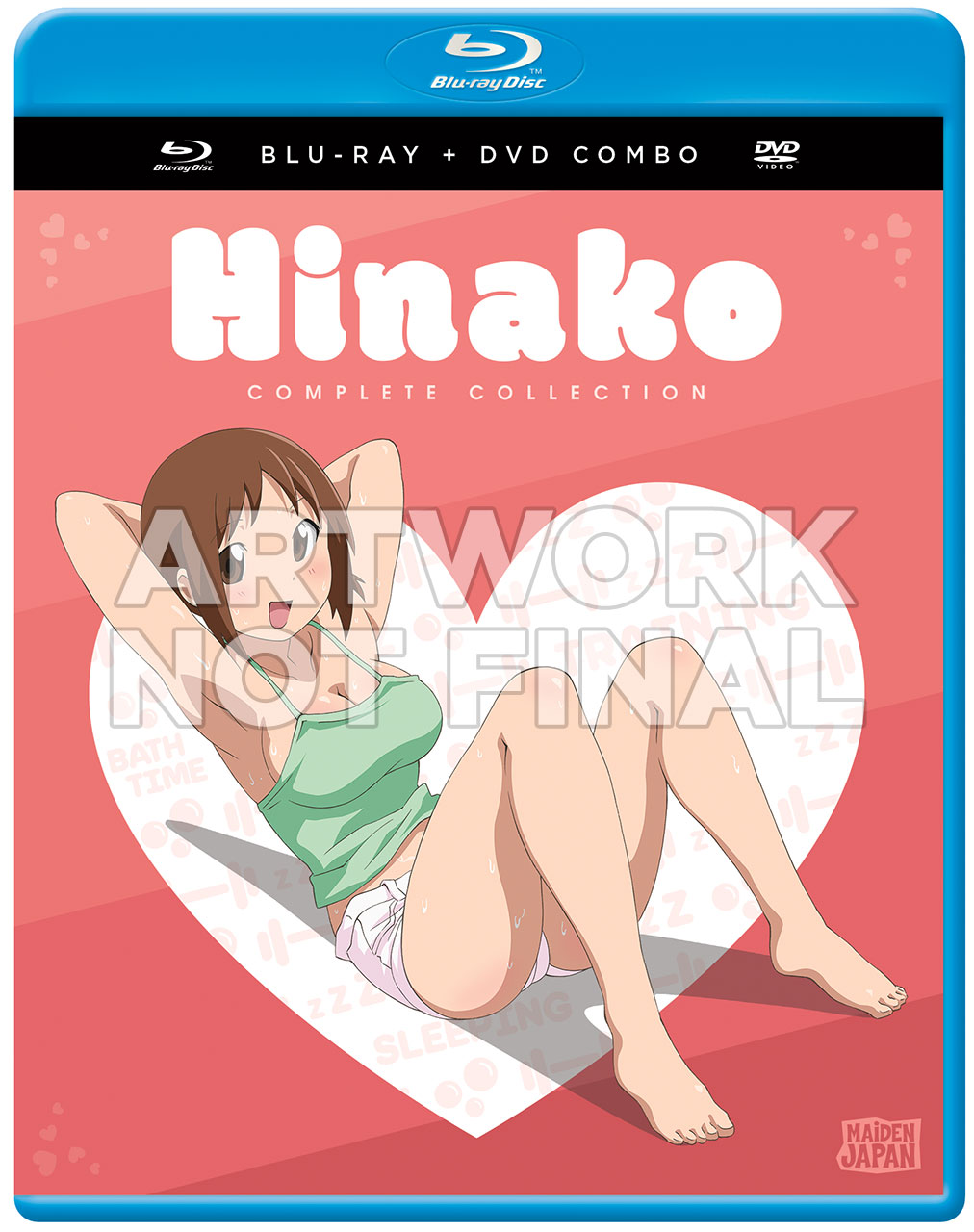 Also released on the 3rd is the complete OVA collection of HINAKO, whose title character transforms from normal human into an anime character! Completely aware that she's being watched (which doesn't bother her), Hinako winds up playing the heroine's best friend, but, in between anime, she's got a lot of time on her hands. Hinako likes the fact that the viewers are out there, considering them her friends as she converses with her invisible audience. The fourth wall is shattered as the most self-aware anime character ever invites you to peek behind the screen and experience the intimate interactive life of Training, Bathing, and even Sleeping with HINAKO. 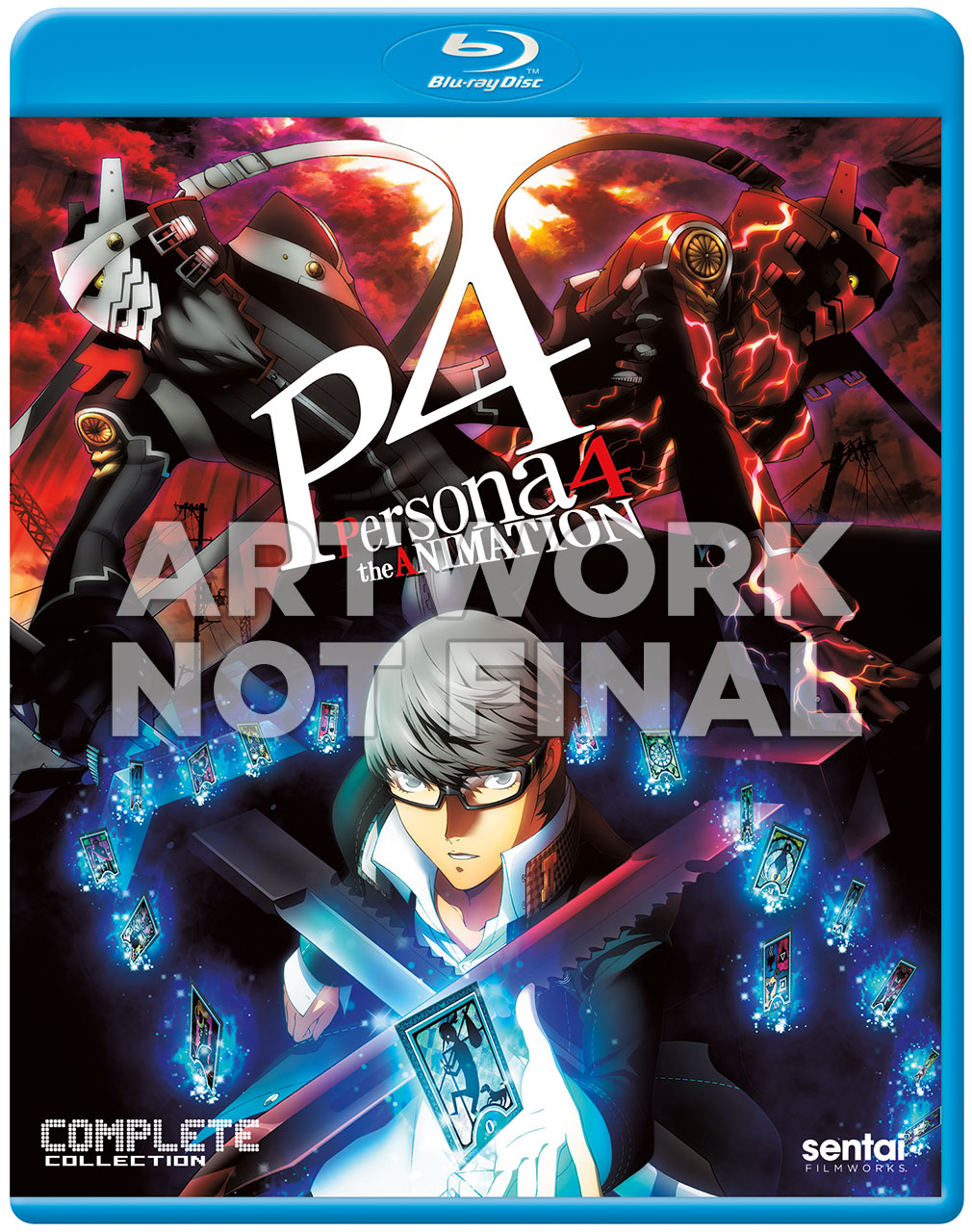 Two series wind up grabbing a complete collection release on October 10th, starting with the anime adaptation of Persona 4. Yu Narukami moves to Inaba to stay with his police detective uncle, hoping that his new life in this small town will be more peaceful than the city. However when strange events begin occurring, Yu is suddenly linked to a series of murders that have been happening across town! While a mysterious TV show world attempts to get Yu and his new friends to enter a dark virtual world, they find themselves plunged into a bizarre alternate reality where they gain incredible powers and abilities. Will these skills help solve the mysteries behind the killer? Or will their powers be their demise? Discover the shocking secrets of the Velvet Room and beyond in PERSONA 4: The Complete Collection! 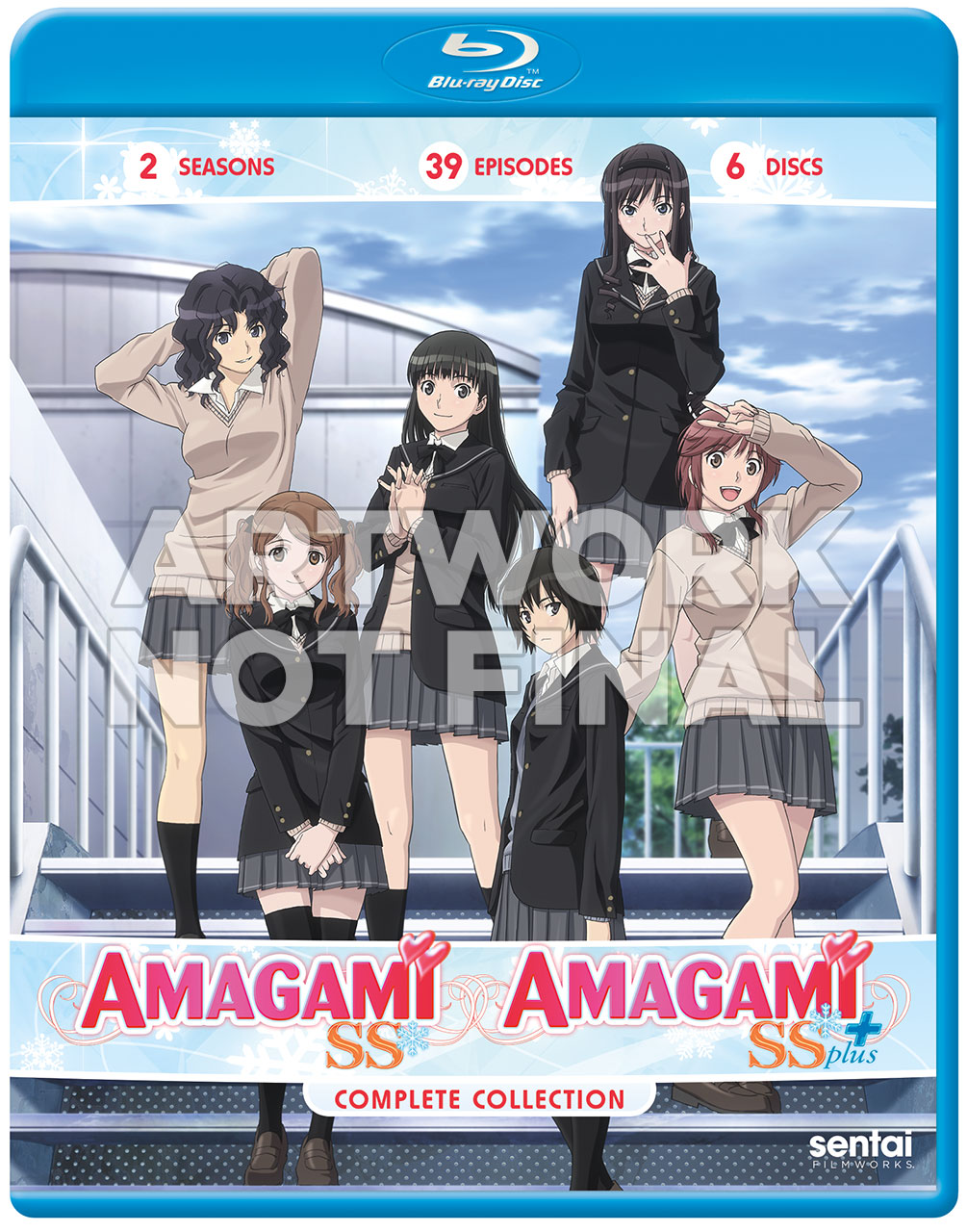 The world of Amagami SS is the other recipient of a complete collection on the 10th. Junichi Tachibana finds himself getting a second chance at love six times over, after being stood him up on a Christmas Eve date. There are a lot of girls Junichi knows who may be "interested", and if he picks the right one, and does the right things, he may just find his soul mate. Better yet, if he screws up after multiple tries, he even gets do-overs! It's the classic story of boy meets girl, girl, girl, girl, girl, and girl again as one guy's luck with the ladies goes from bad to multi-verse in this adaptation of the popular dating sim series. (Be sure to check out our review of Seiren, which also takes places in the Amagami SS universe!) 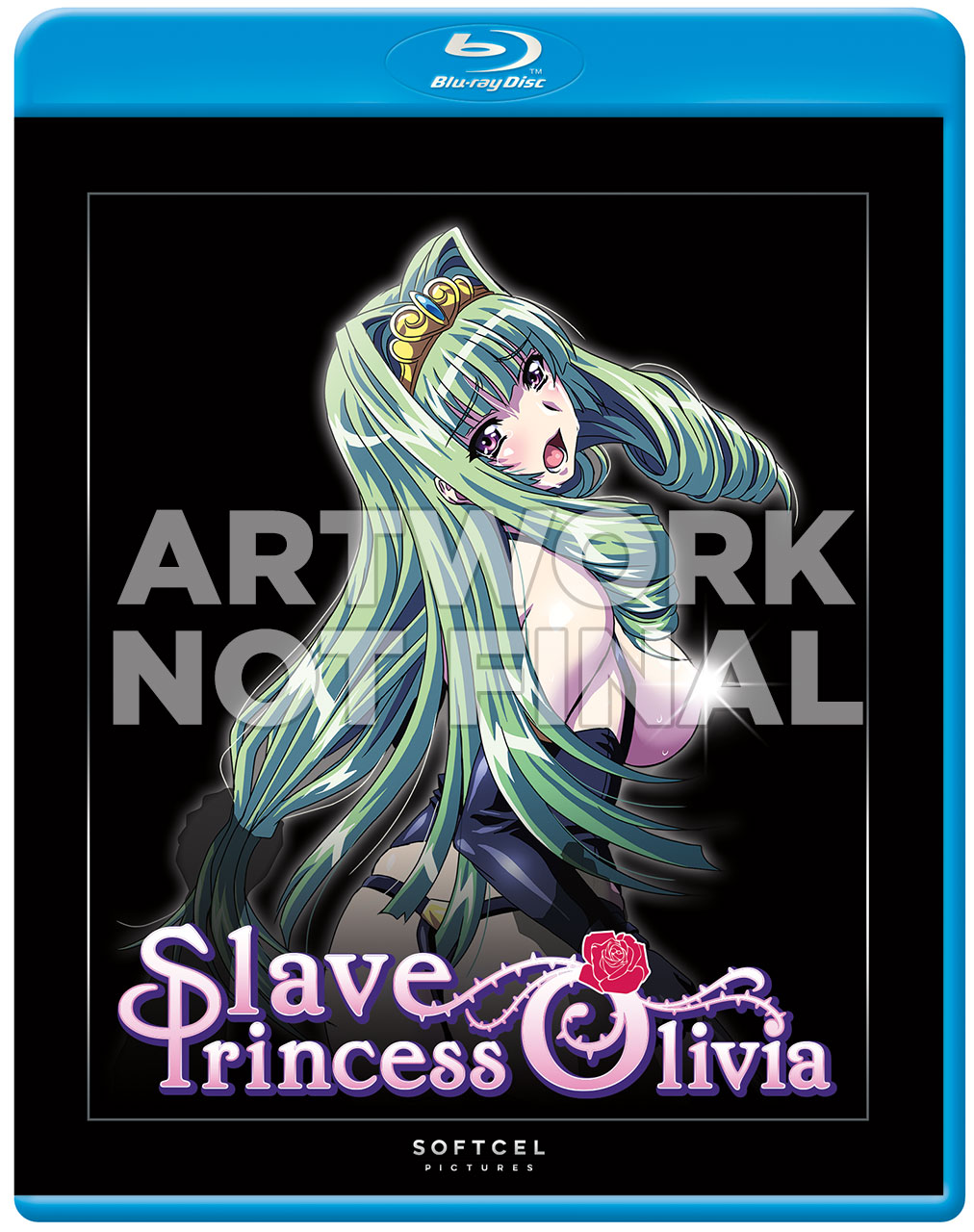 For those looking for something a lot more naughtier, SoftCel Pictures will also be cranking out the release of Slave Princess Olivia on October 10th. Dark Elf Empire of Keltula has conquered and enslaved all the other nations of Midgard with the aid of magic and monsters, and now sets its sights on the lands of Mithras. The Kingdom of Lindengard was the only land that stood in their way, but the soldiers of Supreme Ruler Ashbel managed to halt the Keltulan advance with the aid of the princess Olivia. After the ruthless warrior Cecil captured 5000 Lindengard troops, its ruler was forced to accept a horrific bargain: give Oliva to Cecil in exchange for the lives of captured men! Now, stripped of her armor, rank, and freedom, Lindengard's greatest heroine has become something that we're not allowed to say in an article for general audiences. (WARNING: THIS RELEASE IS INTENDED FOR VIEWERS 18 OR OLDER!) 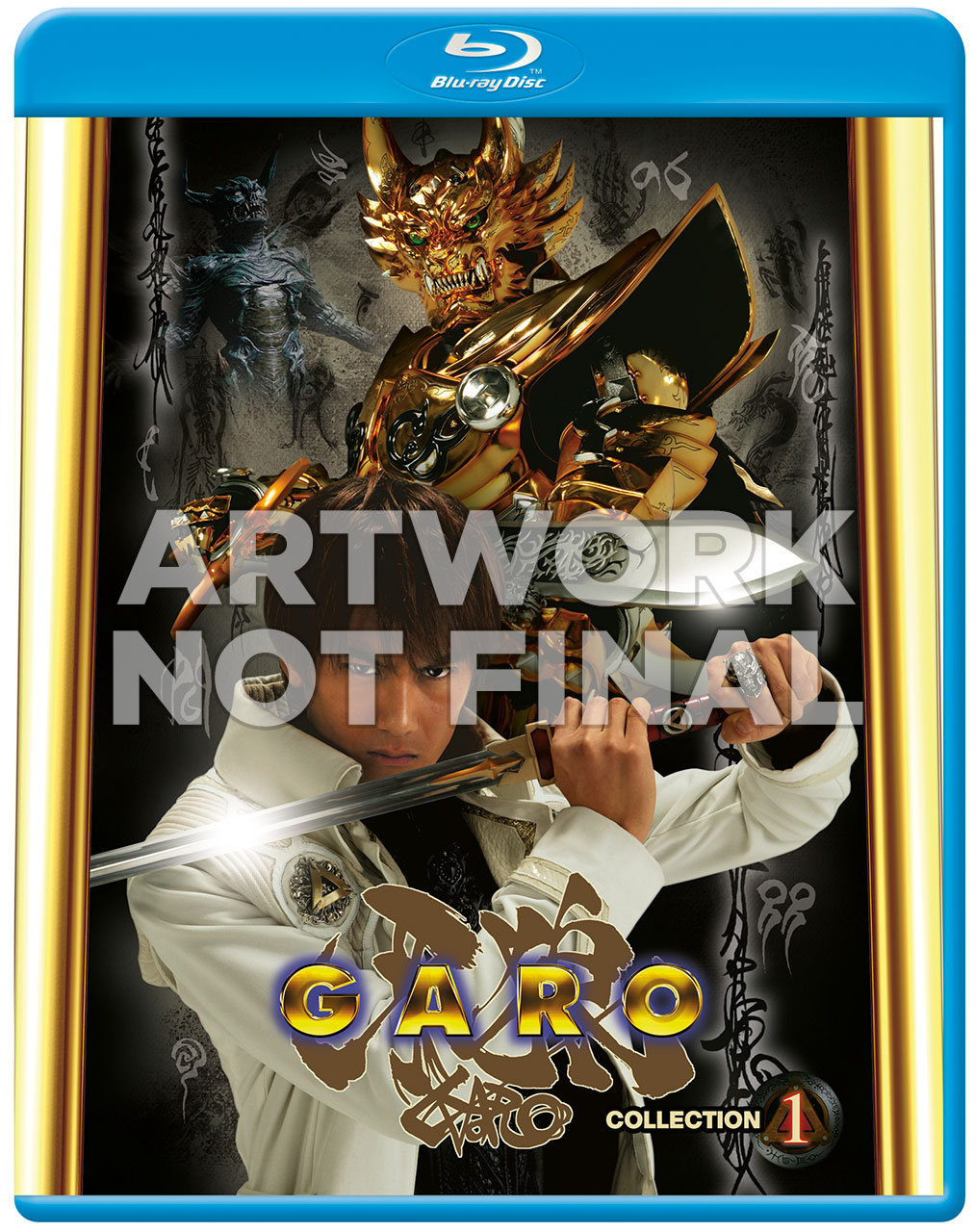 A live-action adaptation of Garo finds itself an American release with the October 17th of its first collection. For thousands of years, mankind has been under attack by an ancient race of demons: nightmarish creatures that feed off the darkness in men’s souls and enter our world seeking bodies to possess. Against these Horrors, the human race has just one hope: the enchanted weapons and armor of the Makai Knights, a secret legion of warriors, priests, and magic users who stand as humanity’s last line of defense. It's an epic experience unlike anything you’ve ever seen before as famed designer/director Keita Amemiya (Zeram, Kamen Rider Black) and a pantheon of Japan’s top action and horror directors, including Makoto Yokoyama (Power Rangers), Kengo Kaji (Tokyo Gore Police), and Ryu Kaneda (Video Girl Ai), unleash the amazing battle sequences and stunning special effects that revolutionized the world of Japanese horror in Garo. 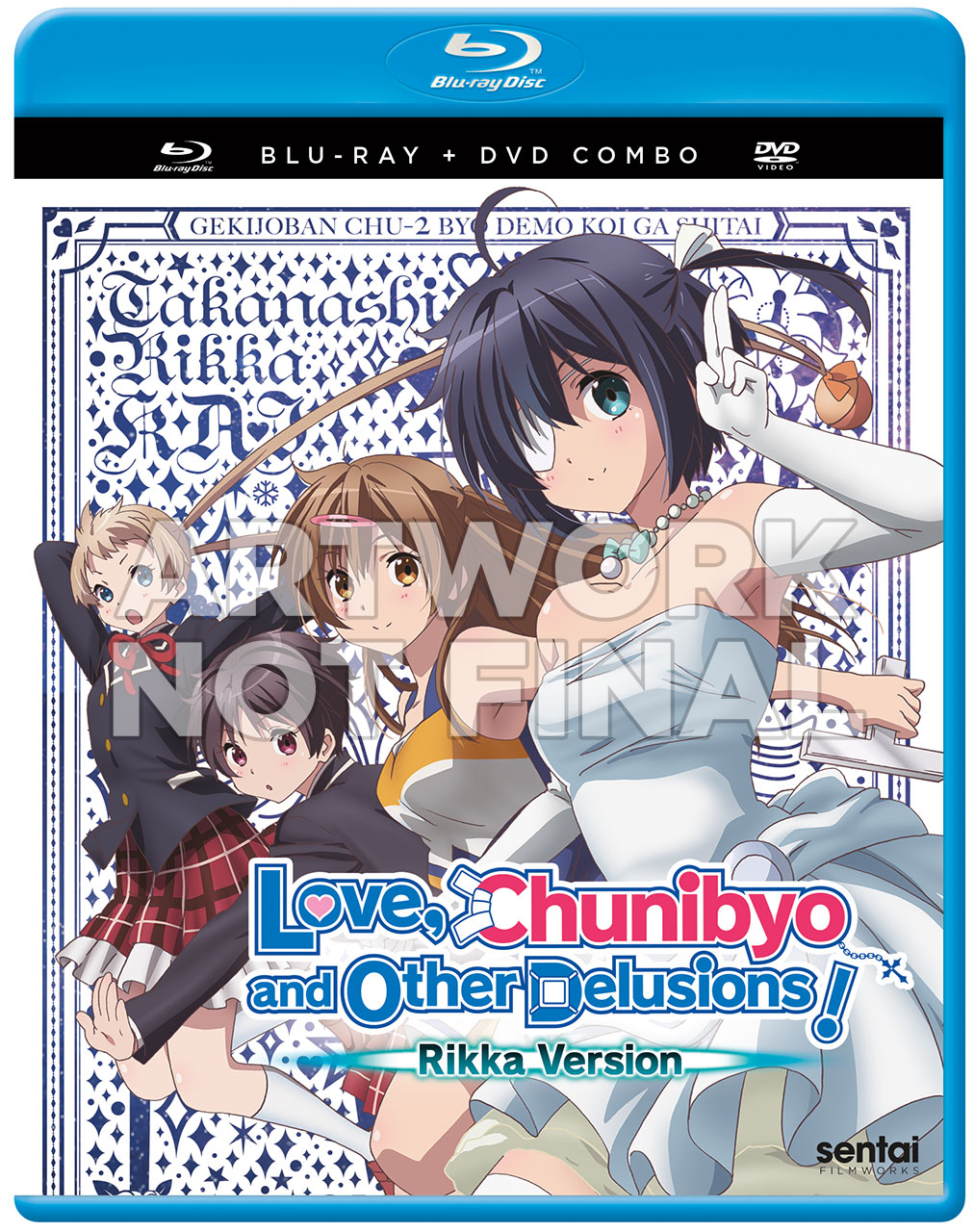 The 2013 film Love, Chunibyo & Other Delusions!: Rikka Version! was the first time the popular series hit the big screen, which finally gets a US release on October 17th. Showcasing the series from Rikka's perspective, the "chunibyo" finds herself with magical powers that no one else seems to believe. Rikka knows in her twisted little heart that Yuta Togashi is much more than just another boy, as she wonders why he's always pulling away. See the world through Rikka's eyes (or eye, technically, since the evil one is usually covered) as she arms herself with her trusted parasol and tackle evil high priestess sisters, enchanted animals, and the feeling of going boy crazy! 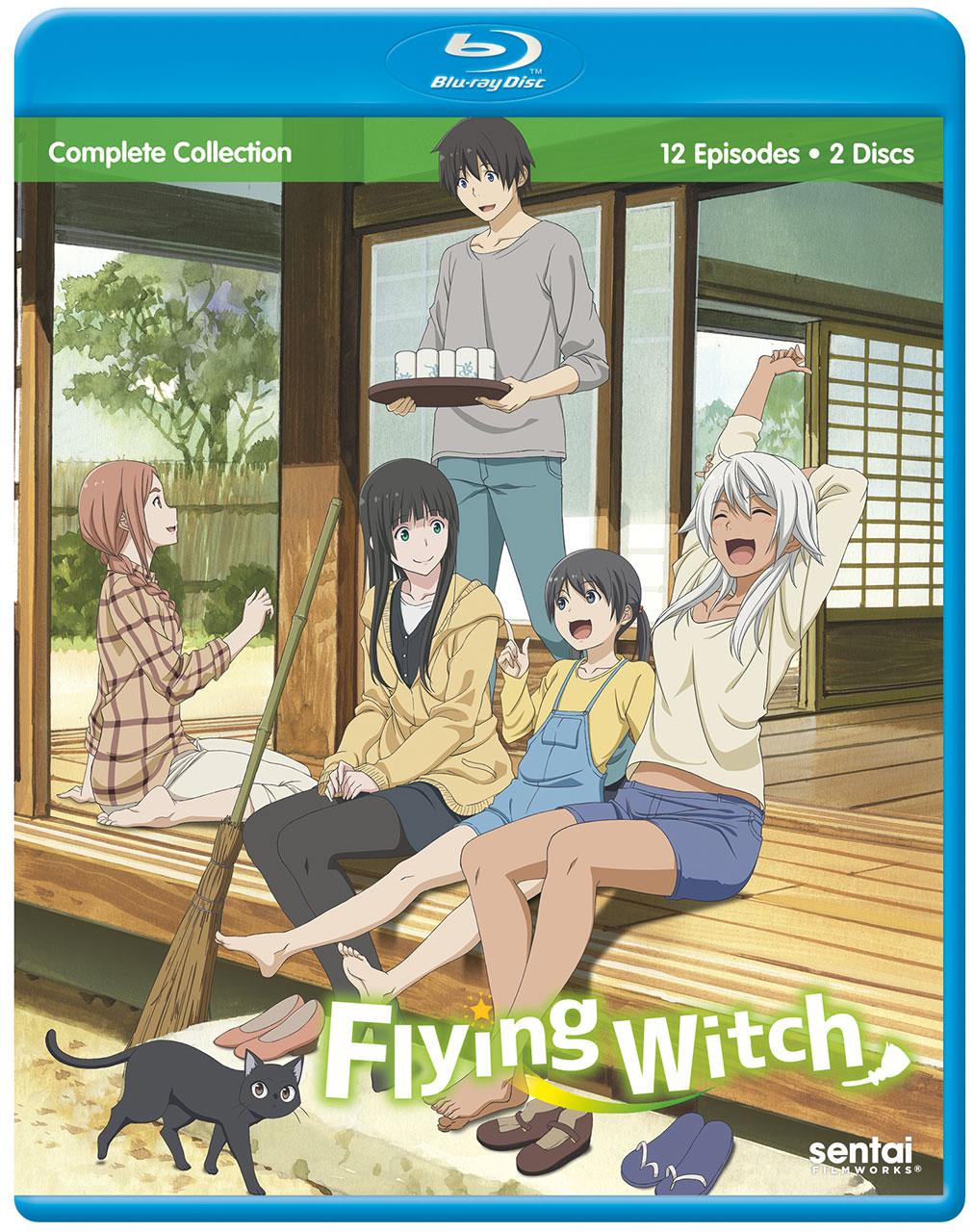 Considering Halloween will be around the corner, it should be fitting that the kindest witch since Kiki should make an appearance with the release of Flying Witch on October 24th. When a witch turns 15, she's supposed to go out into the world alone to study magic. Instead of being sent out on her own, Makoto and her cat Chito find themselves traveling from the bustling city of Yokohama to Aomori Prefecture, where they'll stay with relatives until Makoto finishes school. It's going to be a big adjustment, and it only gets more complicated since "normal" people aren't supposed to know that witches exist… something that she tends to forget. A collector's edition will also be released, which will feature the anime soundtrack, art cards, a decorative Chito cloth, mandrake stickers, and a 112-page art book. (Check out our review of Flying Witch, and see why we called it "the anime equivalent of a warm blanket wrapping around your body on a snowy Christmas morning.") 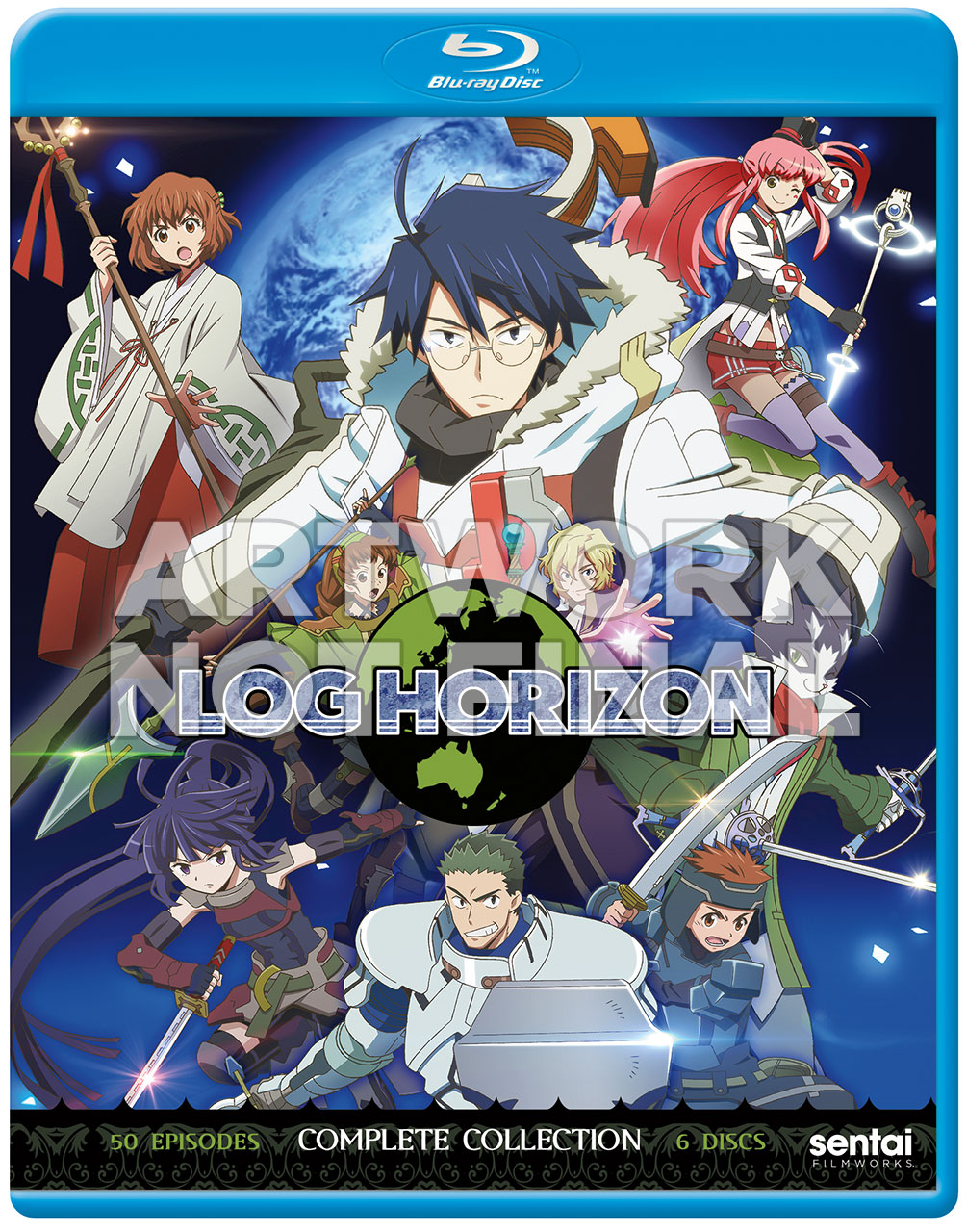 Log Horizon earns itself a complete collection release on the 24th, with both seasons packed in a much more affordable bundle. The online fantasy game Elder Tales is a worldwide phenomenon, immersing millions of players in its intricately conceived virtual world. However, the release of the game's twelfth expansion pack makes that immersion all too literal, as players from around the world are suddenly pulled into the game's no-longer-fictional universe! Now, eight-year ET veteran Shiroe, his friend Naotsugu, the beautiful assassin Akatsuki, and 30,000 other players are faced with the daunting task of learning how to deal with an entirely new reality, one where the Non-Player Characters are actually alive, and the tips and tricks learned while playing with a keyboard no longer apply. 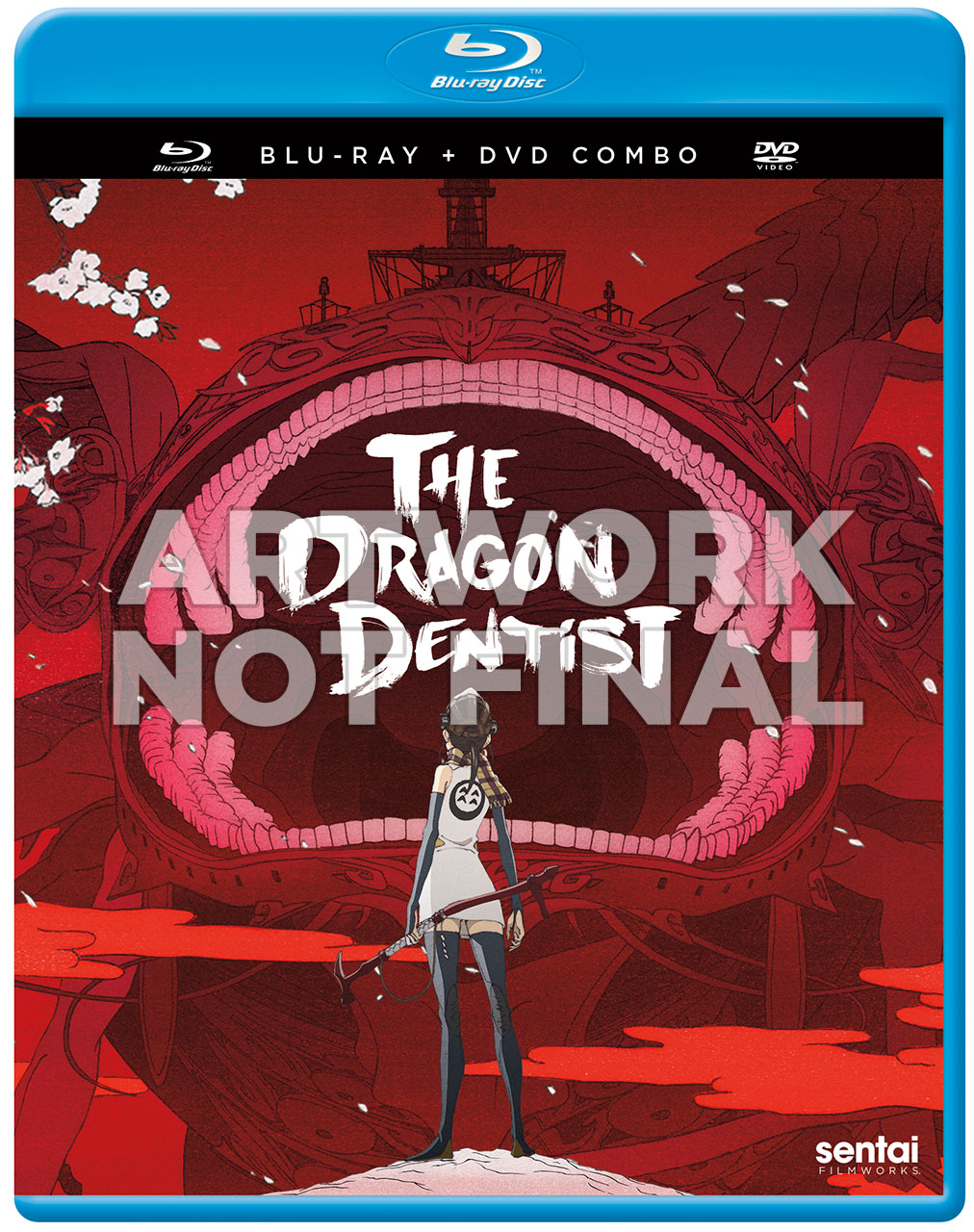 Finally, the hotly-anticipated release of The Dragon Dentist lands on October 31st. As a Dragon Dentist, young Nonoko is charged with venturing into the jaws of the country's dragon protector to keep its pearly canines free of plaque, decay, and other debris. One day, Nonoko discovers an unconscious soldier between her dragon's teeth instead of a cavity, and she finds herself caught up in a series of events that have been foretold to bring disaster to her people! It's an incredible brush with destiny that leads two young people through the mouth of hell and towards certain doom that only the creators of the new Evangelion feature films can unleash into the viewers' eyes!