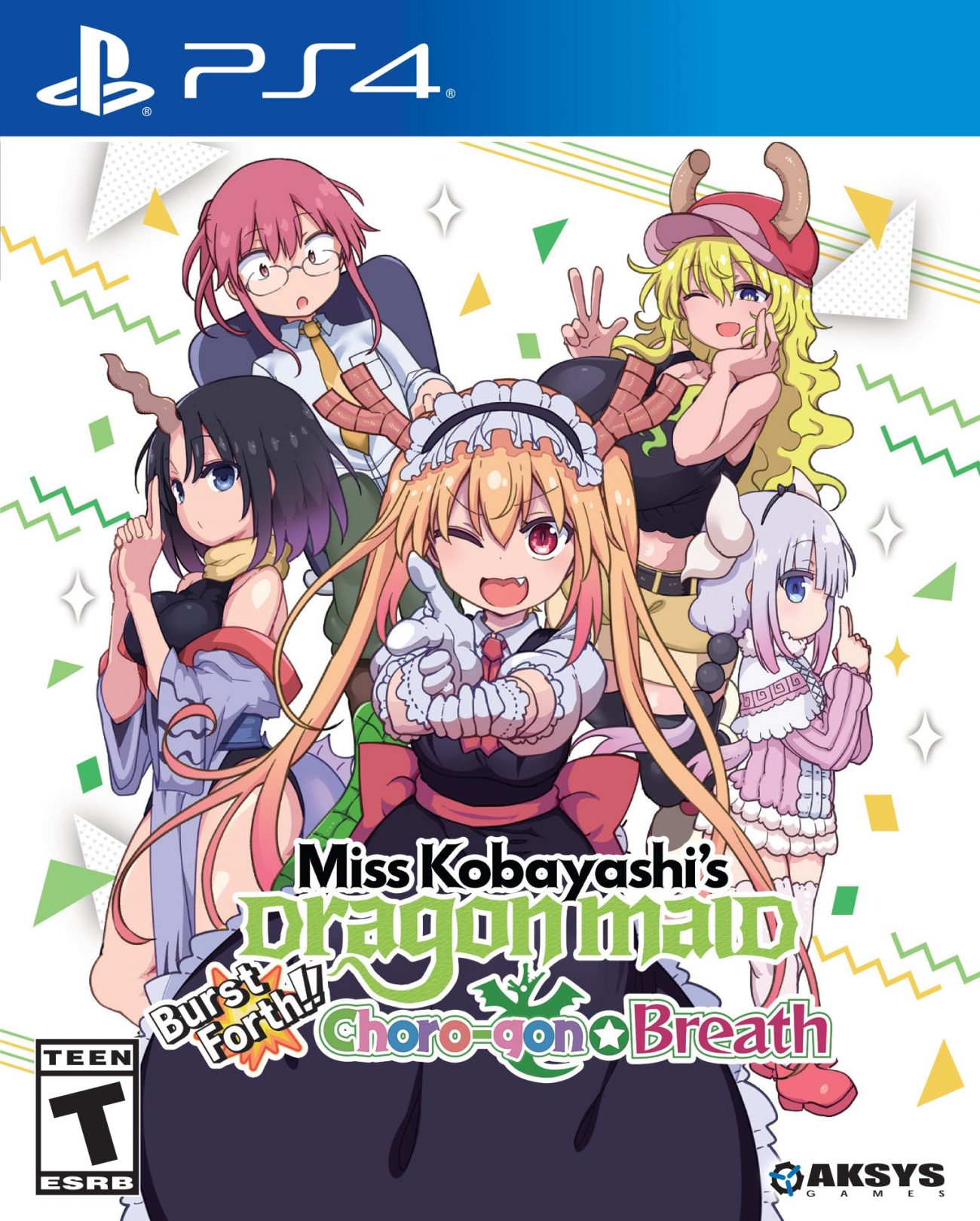 Out of all of the game genres Miss Kobayashi’s Dragon Maid could’ve invaded, the last one I would’ve expected was a bullet hell shoot ‘em up. Yet here I am, staring at Miss Kobayashi’s Dragon Maid: Burst Forth!! Choro-gon☆ Breath, a bullet hell shoot ‘em up that looks like something made for a Comiket event. The bigger surprise: it’s actually pretty fun!

Based on Coolkyousinnjya’s beloved manga series, Miss Kobayashi’s Dragon Maid: Burst Forth!! Choro-gon☆ Breath follows Miss Kobayashi and the female dragons as they visit the apartment of Takiya. As soon as they arrive, everyone is sucked into Fafnir’s computer, where they must visit the worlds of multiple games to exist. With some words of advice from Lucoa, Tohru, Kanna, and Elma dive into the games and shoot everything that moves.

The gameplay of Burst Forth!! Choro-gon☆ Breath is very simple, as you hold down the shoot button to eliminate any threat on the screen. While there are other means of attack, simply shooting until the level ends seemed to be the best strategy. However, once you obtain plenty of hits, players can unleash the Choro-gon Breath, which can take care of either multiple threats or — as highly recommended — deal some solid damage on boss battles. While figuring out how to play can be a cinch, it’s when it comes time to fight when you see just how challenging a game this really is.

To be blunt, Bushiroad’s adaptation of Miss Kobayashi’s Dragon Maid is no slouch. During my entire time playing, I felt the need to look at every pixel of this game to make sure I wasn’t missing an enemy or their attacks. At times, the way the threats can deal damage can be a little unfair, as a mere hit can sometimes wipe out 20% of your HP in a blink of an eye. But that’s a bullet hell for you, which is never meant to take it easy on anyone who dares try to play. 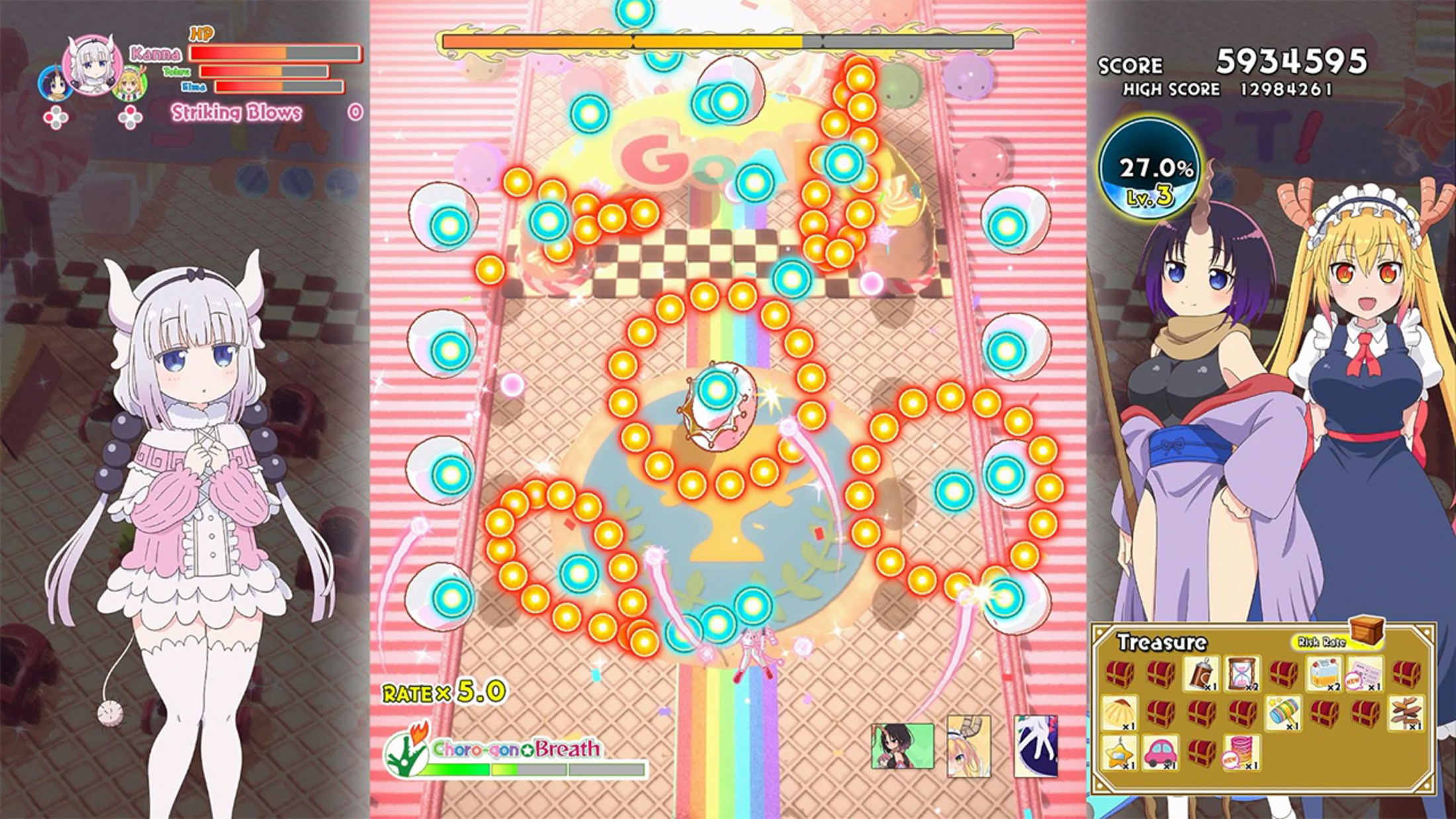 Fortunately, you have three powerful dragons to play and switch around as. Tohru’s got a major blaster, which can hit a single enemy and wipe them from existence. Kanna has a lock-on system in her offense, but doesn’t deliver much firepower in a single attack. Elma fires in all directions, in ways that will make hitting an enemy a guarantee. Players can switch between these three dragons, with each one regaining their health (slowly, mind you) when at rest.

That aspect is a key part of the strategy in Miss Kobayashi’s Dragon Maid: Burst Forth!! Choro-gon☆ Breath. During your entire run, if one of the dragons gets knocked out, there’s no way to revive them. It’s why it’s important to switch out your dragons whenever you can, in order to avoid perma-death. The order of which to play the game’s first three levels is also key, as one will find it’s best to deal with the harder levels first before taking on the easier ones. 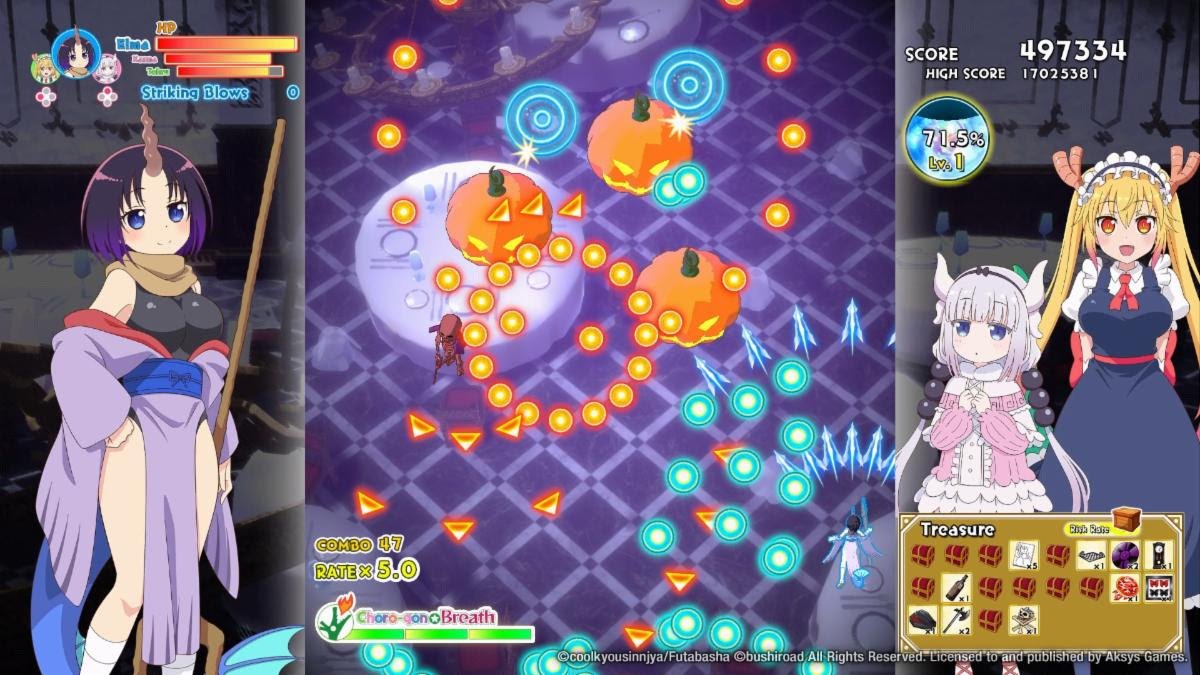 It’s also easy to see the kinds of games this one is parodying, as the nods to Final Fantasy, Monster Hunter, and even Wreck-It Ralph’s "Sugar Rush" are very apparent. The jokes and dialogue — all performed by the original anime cast — is also a joy to listen to, as it fits well to the world of Miss Kobayashi’s Dragon Maid. From Elma’s obsession with food to Kanna’s cancer-curing adorableness, the lines and banter delivered here will no doubt make any fan smirk with glee.

However, the main downside of Miss Kobayashi’s Dragon Maid: Burst Forth!! Choro-gon☆ Breath is its length. On Easy Mode, players can beat the game in about an hour. With that being said, there are many reasons why you should go back and replay, ranging from the many collectibles you can seek out or to experience a far bigger and tougher challenge on a higher difficulty.

Now how about a dating sim next?