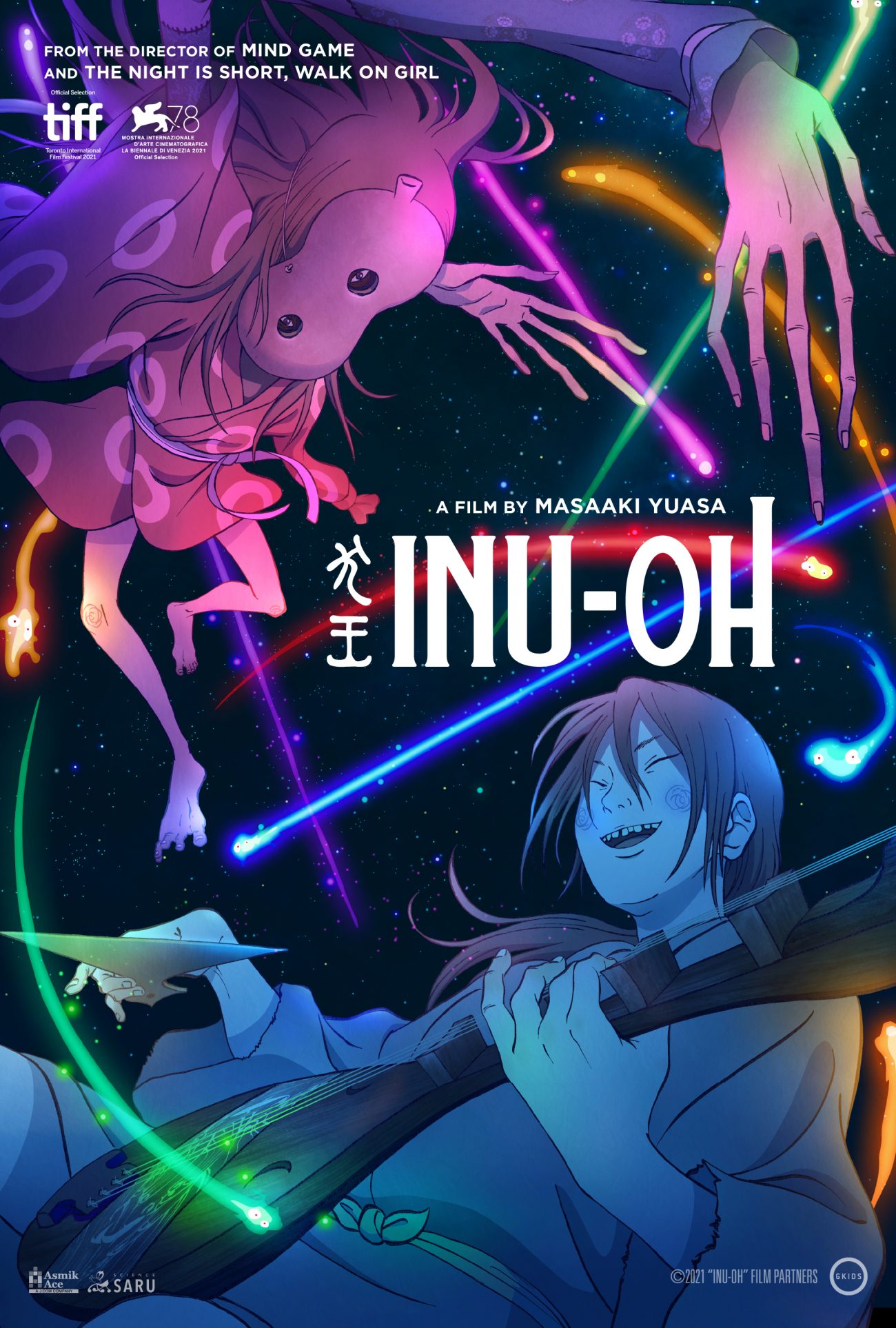 Many would say that rock & roll evolved from the sounds of blues and folk music of the early 20th century; director Masaaki Yuasa (The Night is Short, Walk on Girl) would tell you to go back further! Before the likes of Steven Tyler or Freddie Mercury graced the stage, the rock stars of olden times were storytellers. While ancient Greeks and Romans would tell many a tale to big crowds, the Japanese would add the power of spectacle to their performances. Perhaps this is why Yuasa’s latest film Inu-Oh works on so many fantastical levels.

One-half historical fiction and another half rock opera, Inu-Oh tells the story of two friends out to change the world with their sound and style. The singer & dancer Inu-Oh (Queen Bee’s Avu-chan) was cursed at birth due to his father’s (Kenjiro Tsuda) greedy ambitions, whereas musician Tomona (Mirai Moriyama) was blinded at youth by a cursed Heike weapon. Spirits of the past — including Tomona’s father (Yutaka Matsushige) — surround the two performers, with many being the ghosts of slain warriors of the Genpei War. As their popularity climbs, Inu-Oh’s father becomes swallowed by jealousy, with hopes he can stop his son from stealing his spotlight.

Although loosely based on a real-life 14th-century Noh performer, Inu-Oh places more emphasis on emotion than truth in its storytelling. It’s a nice dose of irony, as the film shows why truth is more powerful than even the biggest of spectacles. As both Inu-Oh and Tomona travel all over Japan to sing these lost stories, the ruler Lord Ashikaga (Tasuku Emoto) is attempting to push for his Tale of the Heike to be the only accepted form of “truth”. Yet as hard as Inu-Oh’s father tries, the two friends keep wracking up the popularity points and recapturing the thunder the scoundrel stole years back.

It’s a sight to behold when Inu-Oh and Tomona perform, as their sound brings to mind the likes of Led Zeppelin, Queen, and Prince. Tomona headbangs while wailing on his biwa, as if he was a predecessor of Jack White or Jimmy Page. Inu-Oh, meanwhile, belts a tune and busts a move in ways that invokes Mick Jagger and Michael Jackson. As they tell stories about whales, dragons, and lost heroes, their stage shows present elaborate puppetry, light trickery, and even a little pyro.

Yes, many of these illusions might not have been invented in the 14th century, but don’t let that aspect take you out of what is one of the most badass musical experiences put to animation! While Westerners may not know anything about the Heike story, it nevertheless presents these performances in ways that make it impossible to turn away from. Watching as Inu-Oh dances & sings while Tomona plucks away is some of the most exciting musical moments placed on the big screen in the last couple of years. Even when taking into consideration Spielberg’s West Side Story remake and even Mamoru Hosoda’s BELLE, what Yuasa and Science SARU have been able to do here is light-years ahead of their most fierce competitors.

A big reason behind that is thanks to music composer Otomo Yoshihide. The songs presented here reach new majestic volumes as the story progresses. Starting from traditional biwa performances, the melodies slowly evolve into the realms of psychedelic and theatrical rock the more Inu-Oh and Tomona grow. At one point, their style goes full Night at the Opera, with “Dragon Commander” delivering a rhapsody of Bohemian levels!

Credit must also be given to the film’s two lead voice actors. Avu-chan has spent their entire career transforming into one of Japan’s greatest rock stars, and their voice meshes perfectly with Inu-Oh’s transformation from hideous monster to rock god. Moriyama’s presents Tomona’s singing voice as one filled with both frustration and adrenaline, a sound that’s akin to early Ozzy Osbourne and Eric Clapton. As for Inu-Oh’s father, you can’t ask for someone better to act sinister than the Immortal Dragon himself Kenjiro Tsuda!

Yet it’s how Science SARU animates this tale where Inu-Oh earns an exclamation point next to the word “spectacle”. The band performances, Inu-Oh’s transformations, and even the sight of the crowds clapping and singing along capture the feel of being at a live concert. Although the film’s several hundreds of years ahead of a Woodstock or Coachella, Yuasa’s direction showcases why music of all kinds is one to act festive around! With that being said, there is some awkward usage of CGI in a couple of areas, especially near the film’s third act when viewers get a glimpse of Inu-Oh and Tomona’s audience.

Inu-Oh is the kind of film we used to get plenty of back in the 60s and 70s, but have since become a rarity. Its songs, animation, and storytelling mesh together to create a movie that’s worthy enough for a trip to the cinema. Like the epics of flim’s past, Yuasa and Science SARU deliver something that deserves to be dubbed “an event to behold”. Although everything may be fiction, Inu-Oh is one movie that speaks beautifully about the spirit of truth, justice, and — above all — rock & roll!