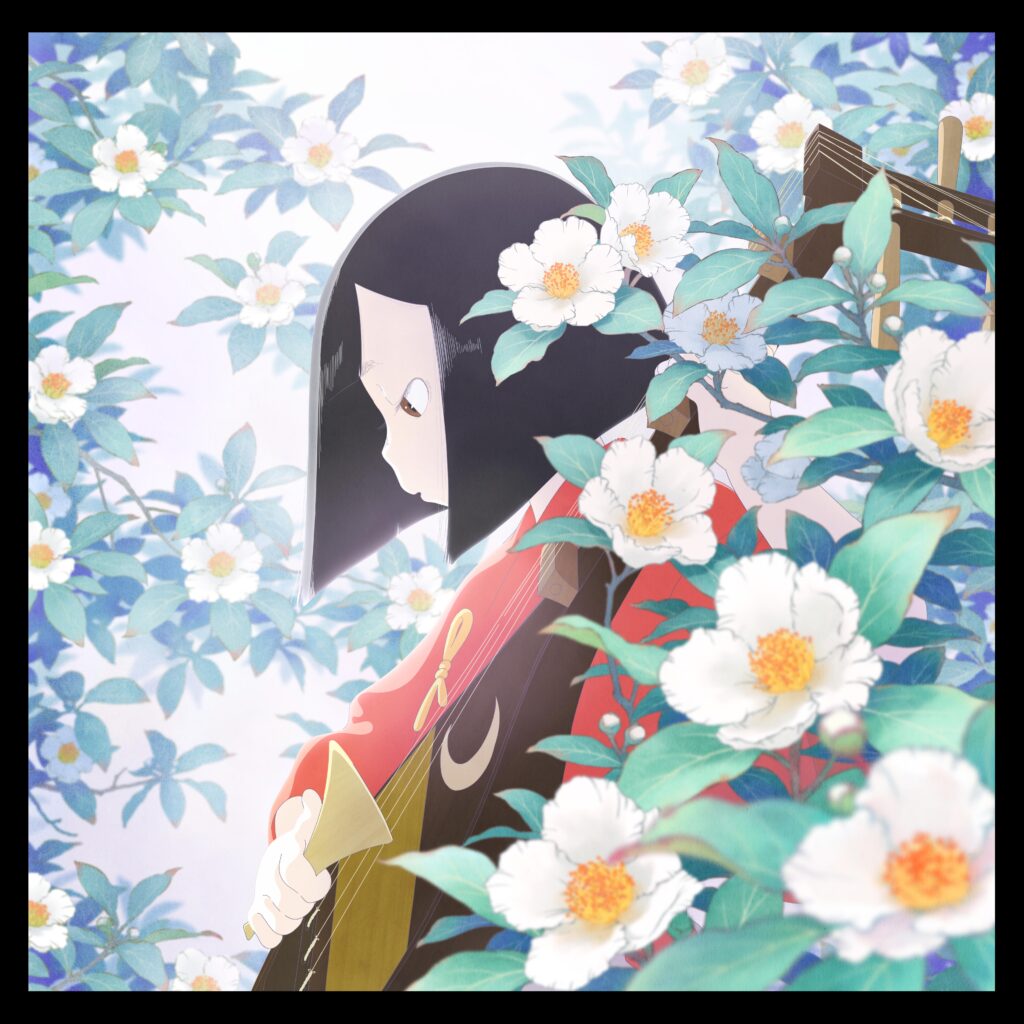 Nearly nine centuries ago, The Tale of the Heike began to makes its rounds. Its origins — based on the rise and fall of the Taira clan — have never been found. However, some claim that the narrative originated from word-of-mouth, with the best assumption being from performers of the stringed biwa instrument. Science SARU (The Night is Short, Walk on Girl) and acclaimed director Naoko Yamada (A Silent Voice) have taken that hypothesis into consideration with their own adaptation, aptly titled The Heike Story.

This version places most of its focus on the original character Biwa (Aoi Yuki), whose father is killed by Taira agents after she insults them. Feeling horrible about the situation, the Taira head Shigemori (Takahiro Sakurai) offers Biwa a place in his home. Reluctantly, the young girl accepts, as she is given a front row seat to the goings-on of the most powerful clan in Japan. Biwa also has a special power to see into the future, thanks to her mismatched eyes. However, it’s clear early on that she sees this “gift” more as a curse, as Biwa is forced to see the fates of the people whom she’s become close with. 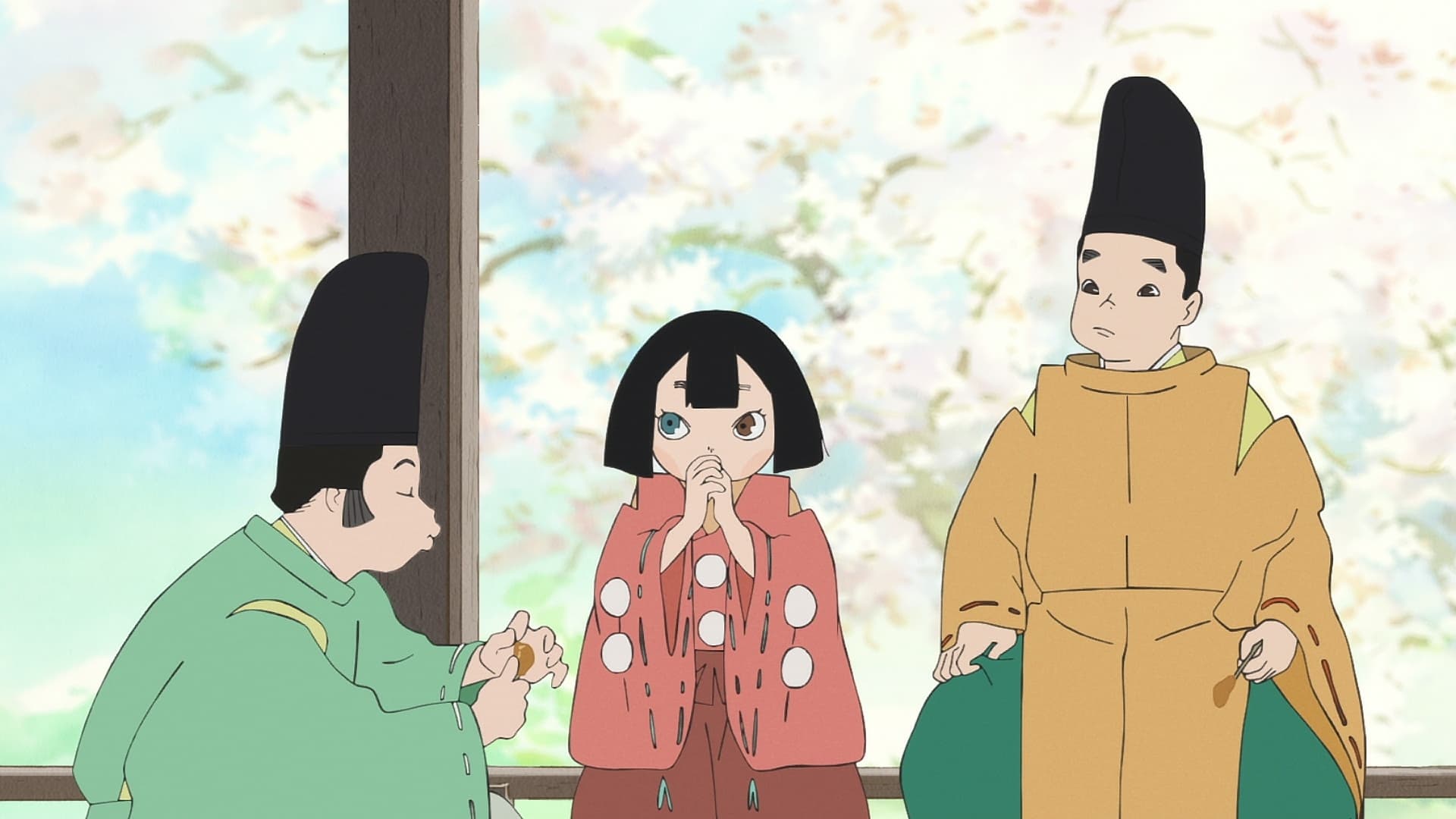 Despite her being an original character, Biwa plays a very important role in The Heike Story. All tales have a narrator, and this is Science SARU putting a face to that voice. Thanks to her foresight, Biwa plays a role into helping Shigemori make some important decisions, some of which bear fruits and other others crop dust. It’s this aspect that makes some weary of what Biwa sees, even if what the future entails isn’t in their favor. This is very evident with Shigemori’s monk father Kiyomori (Tessho Genda), whose mannerisms bring plenty of trouble to their parts.

Yet despite her “gift”, Biwa finds some fates best not told. One of those is that of Shigemori’s half-sister Tokuko (Saori Hayami), whom Biwa sees drowning in the future. The vision becomes all the more troubling when she bears the child that later becomes an emperor at a very young age. At Shigemori’s passing, the dominos that the Taira clan have placed begin to fall, as many nations and clans have a turn at the game of backstabbing. 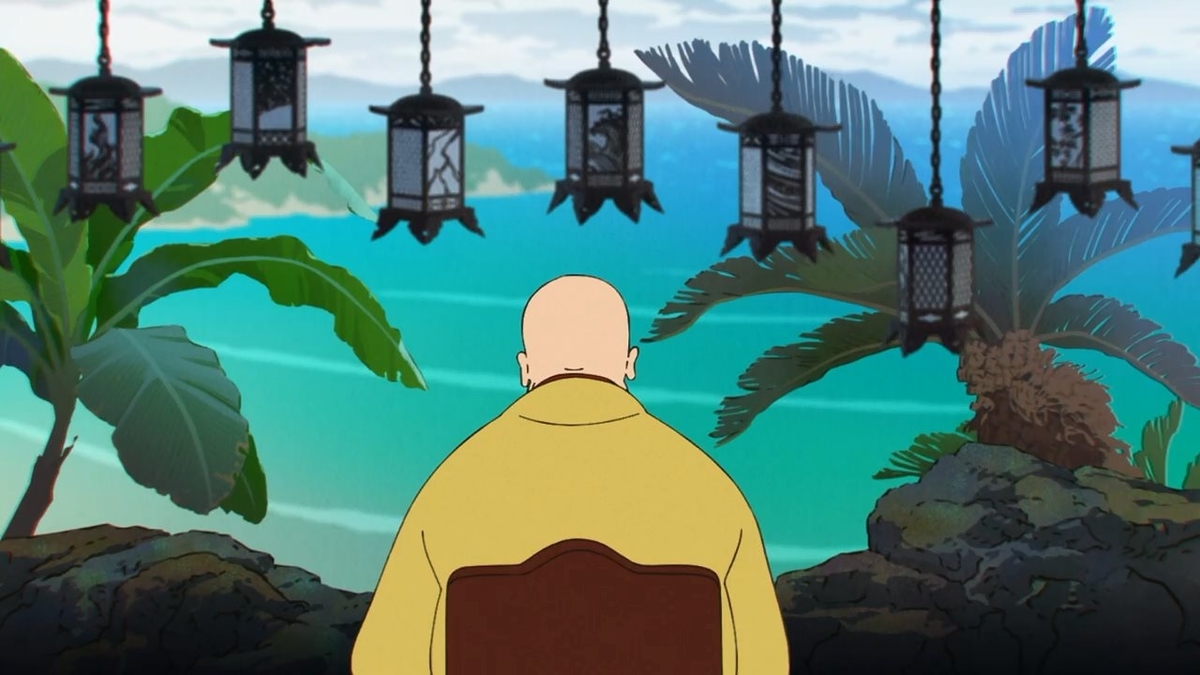 These moments are captured in Biwa’s musical performances. Plucking away at her biwa, she bellows about the battles, fates, and visions that come before her eyes of the present and future. It’s the thread that starts to piece the original Tale of the Heike together, in ways that are both audibly and visually beautiful. Despite their graphic nature at times, Biwa manages to present these chapters of the Taira clan’s fall with elegance and grace.

It’s one of the many aspects that makes The Heike Story awe-inspiring to watch unfold. Scriptwriter Reiko Yoshida (Non Non Biyori, The Cat Returns) adapts the original tale with a mixture of traditional and modern storytelling. What Yoshida gets right is how the narrative’s aura should be, one that goes between a beautiful pink and a haunting grey. Yet even during the grim moments of the story, it’s all presented with a plethora of heart and spirit. 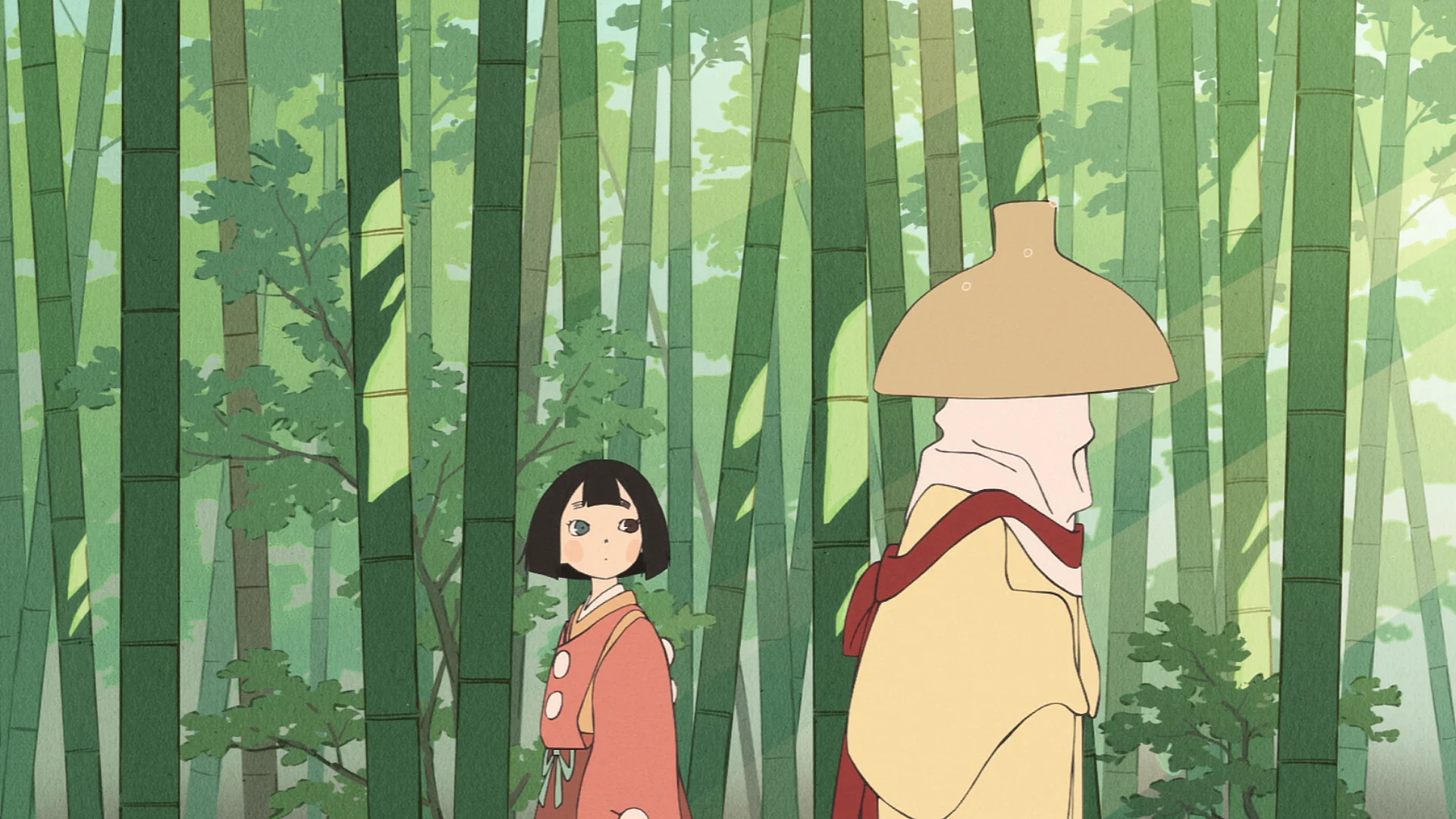 Naturally, this is all demonstrated well with its animation. Having someone like Yamada teaming up with Science SARU to make The Heike Story is a match that feels too good to be true. We see Yamada’s attention to facial expressions and body language put to great use here, something that she mastered when at Kyoto Animation. Meshing with it is Science SARU’s design, as it takes ukiyo-e-based visuals and adds the studio’s trademark rubbery sense of expression.

Together, Yamada and Science SARU have crafted a true work of beauty. Epic battles, quiet nature scenes, and even Biwa’s performances are captured with much love for the craft of visual arts. Despite it being drawn digitally, there’s a feeling of pure pen & ink design placed in how the worlds are presented and how the characters maneuver. All of it is tinted with the feelings of joy and sadness, with its faded coloring a metaphor for the beauty that will soon vanish once the Taira clan’s enemies outnumber them. 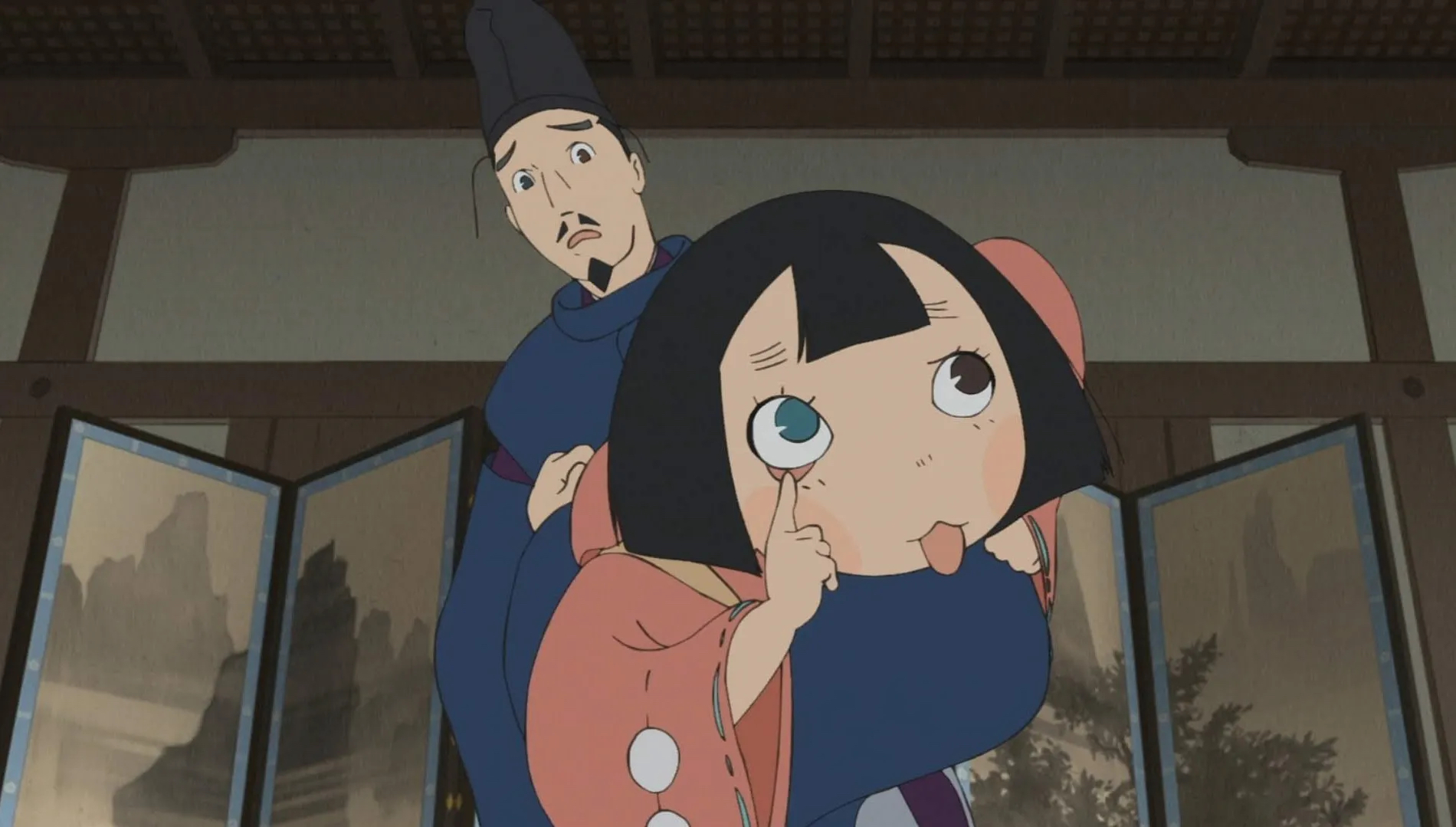 There isn’t anything else I could say about Aoi Yuki’s talents that I haven’t said in past reviews. She plays Biwa with such glee and heartache, as she switches between acting like how a child should and burdening the knowledge of the Taira clan’s fate. The moments where her voice shines the most are during her performances, as she howls about the events that have unfolded between the Taira clan and their enemies. It’s the moment where the audible arts and visual arts conjoin to create a work that transcends anything seen in anime this year!

Speaking of the audible, I’d be remiss not to mention the soundtrack by Kensuke Ushio (Devilman Crybaby). Despite it being an old story, Ushio implements modern sounds ranging from hard rock to lo-fi hip hop that somehow fit perfectly with the narrative. The sound may not fit with the times, but it certainly fits with the moods that flow through The Heike Story. Even when the score is stripped to the most simplistic of beats, Ushio somehow finds a way to amplify them as something more than just background music. 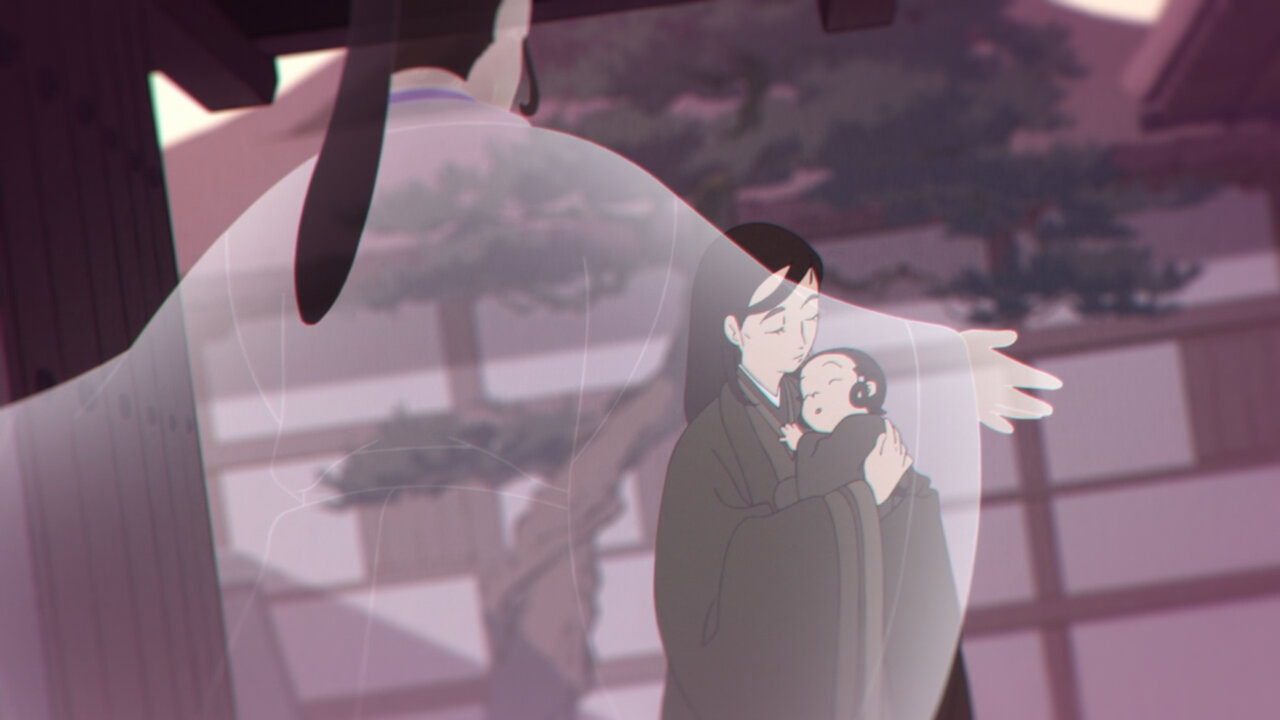 I also can’t help but fall in love with the show’s theme songs. Opening theme “Hikaru Toki” by Hitsujibungaku is a true indie rock gem if there ever was one. It captures the lighter side of the story well, being both uplifting in melody and beautiful in spirit. Agraph (an alias of Kensuke Ushio) and Scha Dara Parr’s Ani collaborate on the equally-beautiful end theme “unified perspective”. It acts as the polar opposite to “Hikaru Toki”, with its dark moods hinting at the hardships that are to come for the Taira clan.

The Heike Story is a work of anime art that should be treated as such. Its visuals, soundtrack, and voice acting are some of the absolute best this season has to offer. All of it wrapping around an epic tale that should be uttered in the same sentence as The Three Kingdoms. With just the first pluck of a biwa, The Heike Story will grab anyone’s attention; by the time of its final pluck, one hopes that note echoes throughout the rest of 2021.