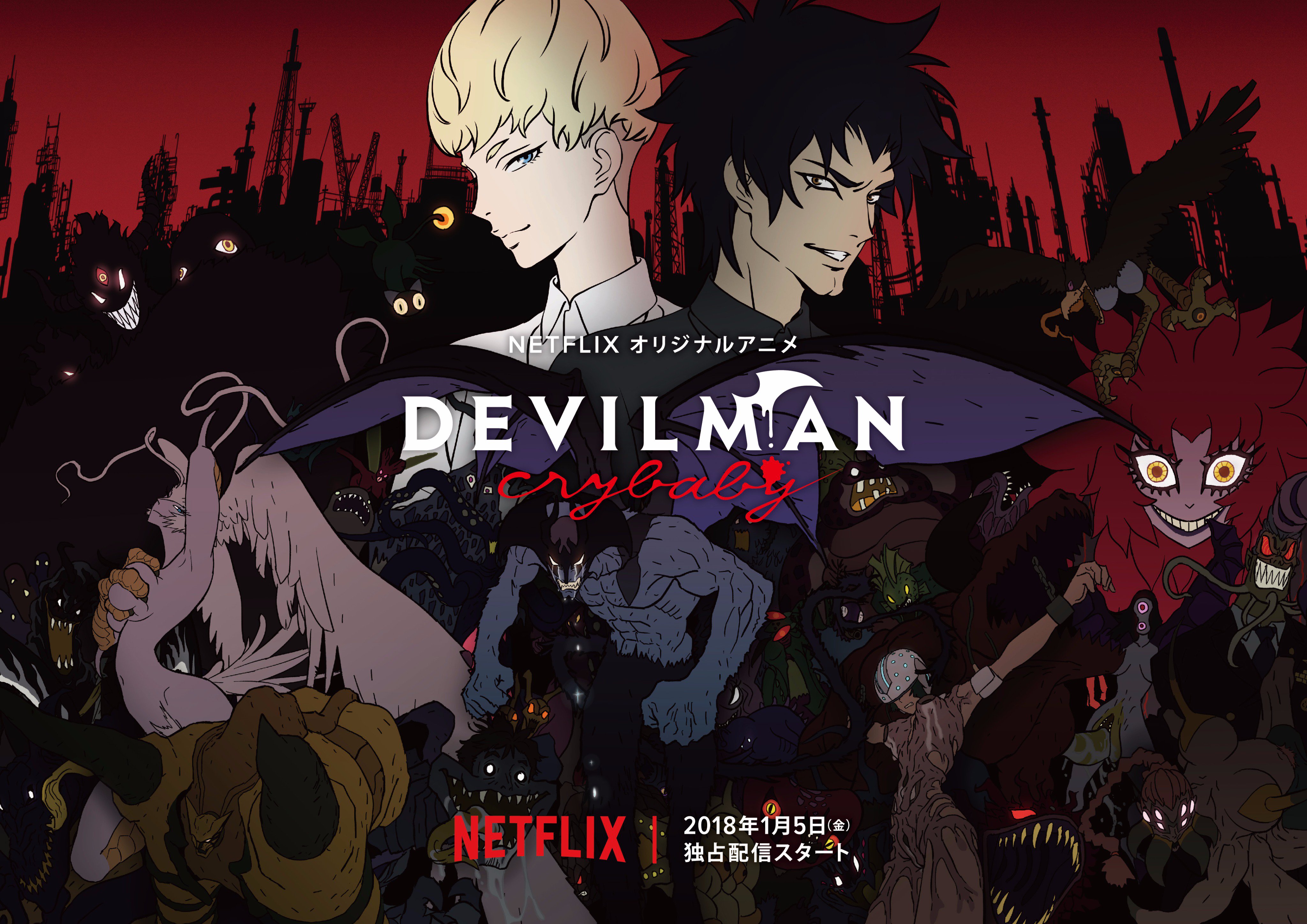 The era of hardcore anime has made its triumphant return, and we can all thank Netflix for making it happen. Gone are the days where anime creators had to settle for the OVA market if they wanted to go full throttle with the sex, violence, and straight-up debauchery. Instead, the streaming market can now be home to some of the most raw and surreal animation one can (and cannot) fathom, with the likes of Netflix, Crunchyroll, and Hulu welcoming with open arms the kinds of series that you can in no good conscience show on regular television. And right out the gate, this new era of hardcore anime has delivered its most prodigal of sons: Devilman.

Created in 1972 by iconic mangaka Go Nagai (Mazinger Z, Cutie Honey), Devilman has had its fair share of adaptations, with an animated series by Toei in the same year, violent OVAs in the 80s and 90s by Oh! Production, and a live-action film in 2004 directed by the late Hiroyuki Nasu. To celebrate Go Nagai's 50th year as a manga creator, renowned anime director Masaaki Yuasa (Mind Game, Lu Over the Wall) and his studio Science Saru decided it was time that the demon with a human heart was given the most proper of animated treatments.

What this team-up resulted in was not just the most faithful adaptation of Nagai's creation yet, but one of the earliest contenders for Anime of the Year: Devilman Crybaby! 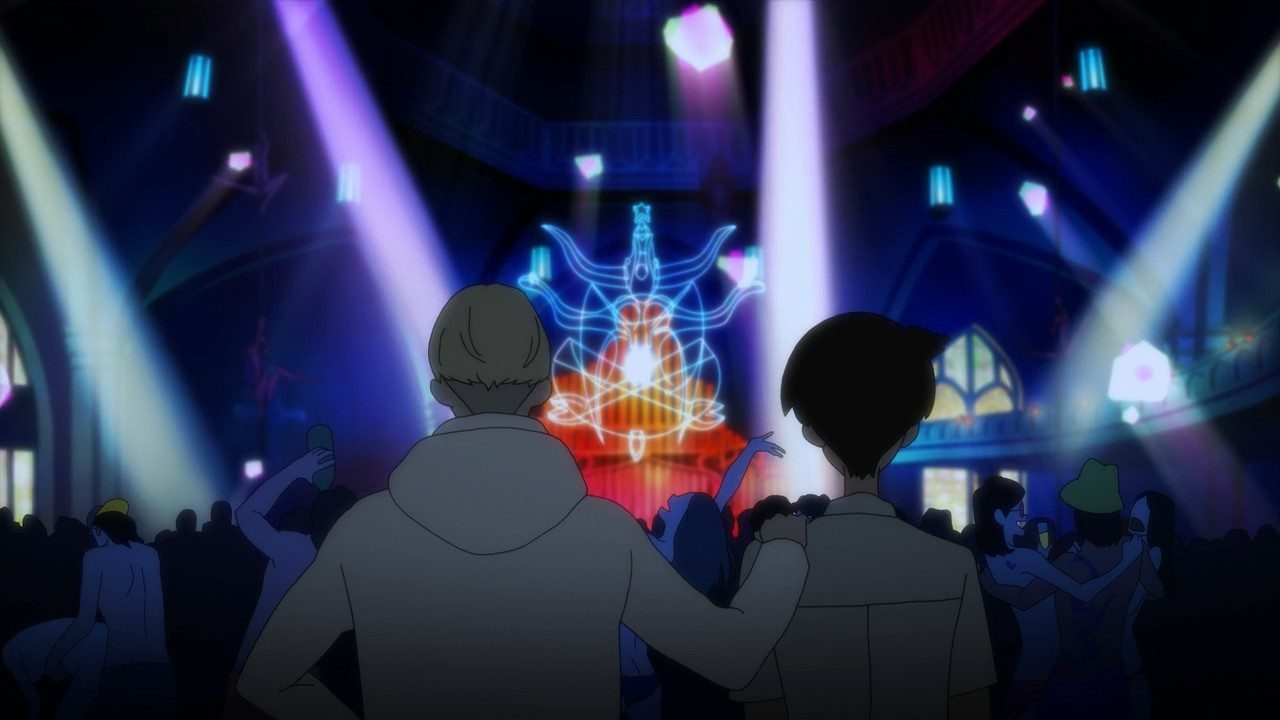 Akira Fudo (Kōki Uchiyama) is a high schooler with one of the biggest hearts, never crying for his own faults but weeps when a friend is in dire straits. Living under the same roof with star runner Miki Makimura (Megumi Han) and her family, Akira lives day-to-day doing the right thing while his parents travel the world with their medical knowhow. One day his old friend Ryo Asuka (Ayumu Murase) appears out of nowhere, informing Akira about an ancient race of demons bent on world domination. Upon entering a drug and sex-crazed party, Ryo wakes up the demon inside of Akira, resulting in not just the rebirth of Devilman, but a whole new persona for the usual goodie two-shoes.

Soon girls are fawning over Akira's newfound strength, eating massive meals and discovering a new pastime watching hardcore pornography in the school's media room. Despite this 180-degree character turn, Akira continues to have a noble heart, which aids in helping Miki, her family, and complete strangers who may be the victims of these demons. It's when the invasion goes into full throttle where Ryo's plan comes to fruition, resulting in a battle between the concepts of truth and fear. 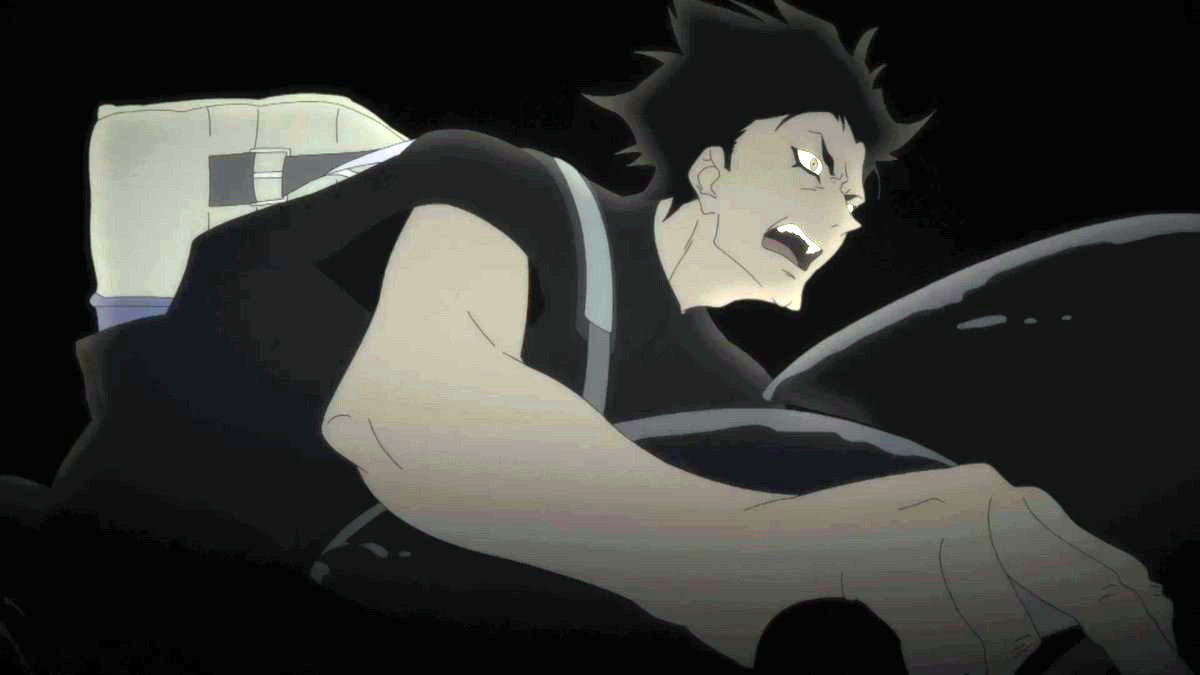 Devilman Crybaby is not the kind of anime for the faint of heart. Those familiar with Nagai's original manga know that he has the tendency to push the envelope in the sex and violence departments. Yuasa's adaptation doesn't skimp on this in the slightest, with Devilman's grand entrance filled to the brim with teething naked women splitting men in two and heads popping off like they're soda bottle tops. It's visually unnerving at times, and yet it's some of the most glorious action these eyes have seen in years.

Thanks to Yuasa's more fluid style, this take on Devilman is a true visual spectacle. Watching as Akira transforms and slays demons is a true highlight that this series never falters on. What I appreciate about Science Saru's animation is their attention to detail in both characters and the world surrounds them. Little things like "The Last Supper" in the Makimura family's dining room, Ryo's white-on-white bachelor pad, and even the attic filled with classic 70s-era Devilman visuals brings a great blend of modern and nostalgic style to the worlds. Sticking out most are the characters themselves, which come off more as Hosoda-like rather than Yuasa's. (Watching some of these characters run full-speed in devil mode calls back to the goofy cartoonish styles of Osamu Tezuka, something that I don't think was intentional but nonetheless a humorous nod.) 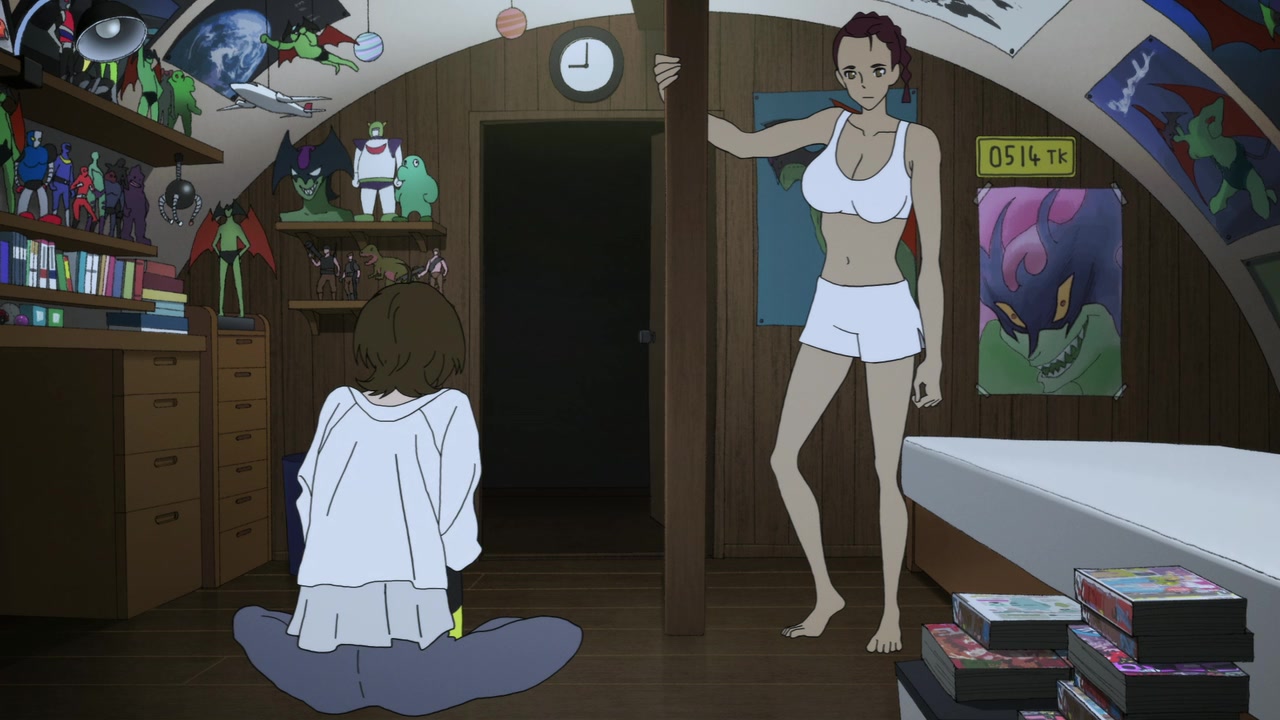 Of course, one of the biggest surprises to those who only know of Devilman for its violent and sexual means is its story. What starts as a reason to showcase blood and hardcore nudity quickly transforms into a cautionary tale of the fragility of humanity. The sight of humans becoming even bigger monsters than the demons they're supposed to go after rings true to what people can be coerced to accomplish when fear is pushed into their subconscious. It's a rather haunting look, one that can be compared to what's occurred in the U.S. thanks to some of the horrible people in power.

These are the moments where Devilman Crybaby becomes not just a great hardcore anime, but an important piece of social commentary. Watching as regular people become savages towards their own kind results in a scene that will forever stay in my mind. Believe me when I say it is one of the most disturbing things I've ever seen put to any form of visual medium, but it's an important piece of storytelling that pushes Akira to do what he needs to accomplish. As much as I want that specific scene out of my head, I realize what both Nagai and scriptwriter Ichirō Ōkouchi (Code Geass, Berserk: Golden Age Arc trilogy) are conveying in that heart-shattering visual: human's greatest nemesis is not a beast, but rather another human drenched in ignorance and anger. 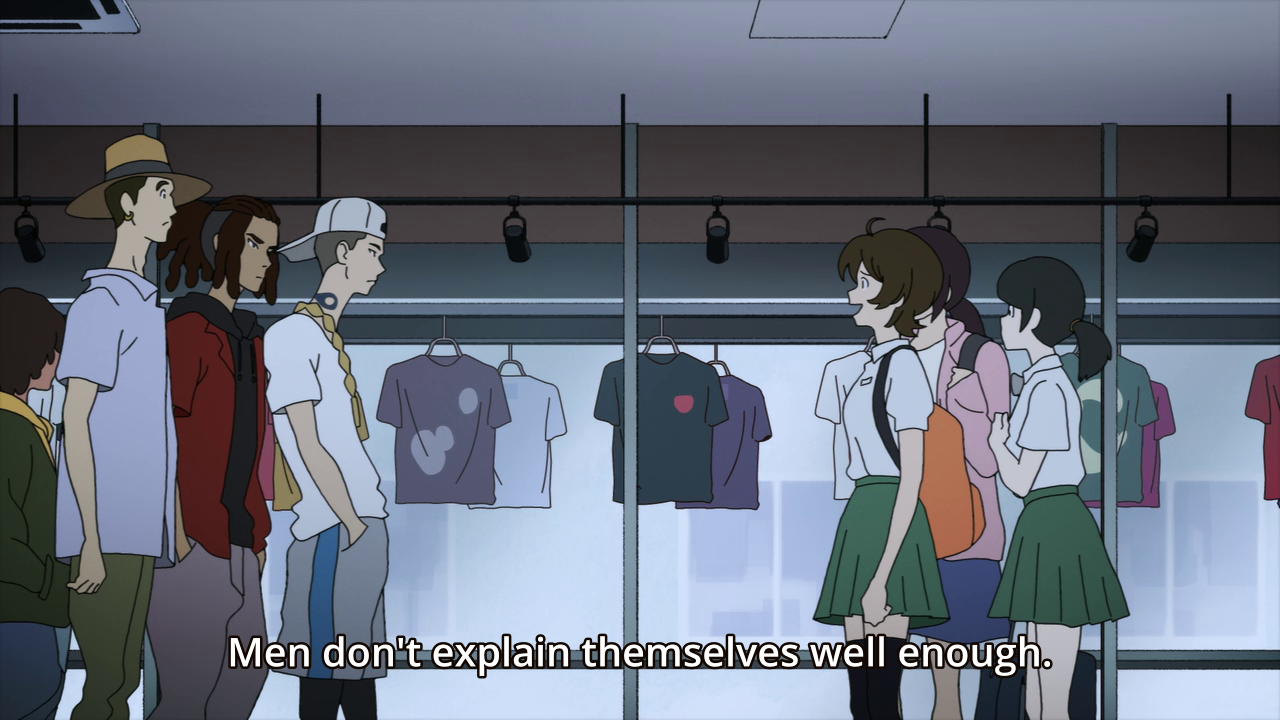 All of this is presented strongly not just in its animation and writing, but also a stellar voice cast. Uchiyama's Akira/Devilman balances a soft heart with a demonic mentality in the same way he portrayed the titular character in 2008's Soul Eater. Even when in his heroic mode, the emotion he pushes through in his performance is one that will stick out as one of 2018's finest voice acting moments. Murase plays Ryo with do-good attitude that hides a truly sinister motive that slowly spills out the more he uncovers the truth. Han takes the role of Miki and transforms it from your average damsel-in-distress to the voice of hope in a frightened world.

Composer Kensuke Ushio (A Silent Voice, Space Dandy) creates a soundtrack that honors both the original series and the sounds of the modern era. Hearing the original Devilman theme remixed with a haunting choir is a lovely nod to the series' roots, with the action and party scenes aligned with a score similar to that of Cliff Martinez's works. Minimalistic at times, it fills whatever cracks the visuals were unable to cover up with relative ease. 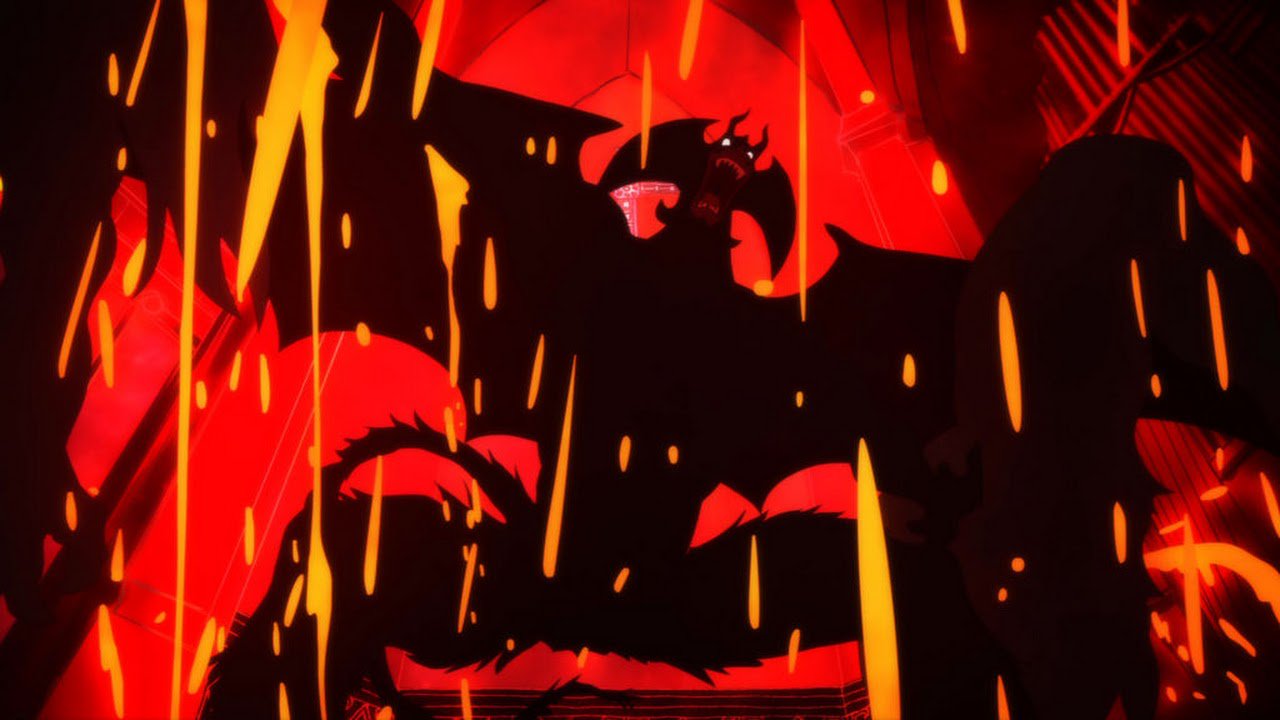 Devilman Crybaby not only outdoes the hype it created, but it cements itself as the true animated adaptation of Go Nagai's crazed concoction. Demented, humorous, emotionally scarring, and as violent as anime could possibly get, Yuasa's reimagining pays the finest tribute to Devilman and the world he protects from the demons below. Netflix has done us a great service with this series, and hopefully it will open the door for more fearless anime to be brought to life in the near-future. With 2018 just starting out, Devilman Crybaby has already become the series the rest of the industry needs to topple over for that golden, blood-soaked crown that now rests upon its head.

So now that Devilman Crybaby's done, can Netflix please make us a new Violence Jack adaptation next?

Devilman Crybaby can be viewed on Netflix. Episodes 1-10 were observed for this review.

Background Noise: Past, Present & Future by Rob Zombie - When you need that perfect score for a hardcore anime, no one delivers it better than Rob Zombie. His 2003 best-of release contains his finest works from his solo career ("Dragula," "Feel So Numb") and as frontman of White Zombie ("More Human than Human," "Thunder Kiss '65"). With some cool collaborations with Iggy Pop, Alice Cooper, and even Lionel Richie, along with the killer original "Two-Lane Blacktop," Zombie showcases the brightest in his dark, macabre catalog. Of course, you cannot forget about the song "Super Charger Heaven," which literally screams to be an opening theme to Devilman one day...