HomeAnimeANIME/FILM REVIEW | "Harmony" Keeps in Tune with a Pitchy Story

ANIME/FILM REVIEW | "Harmony" Keeps in Tune with a Pitchy Story 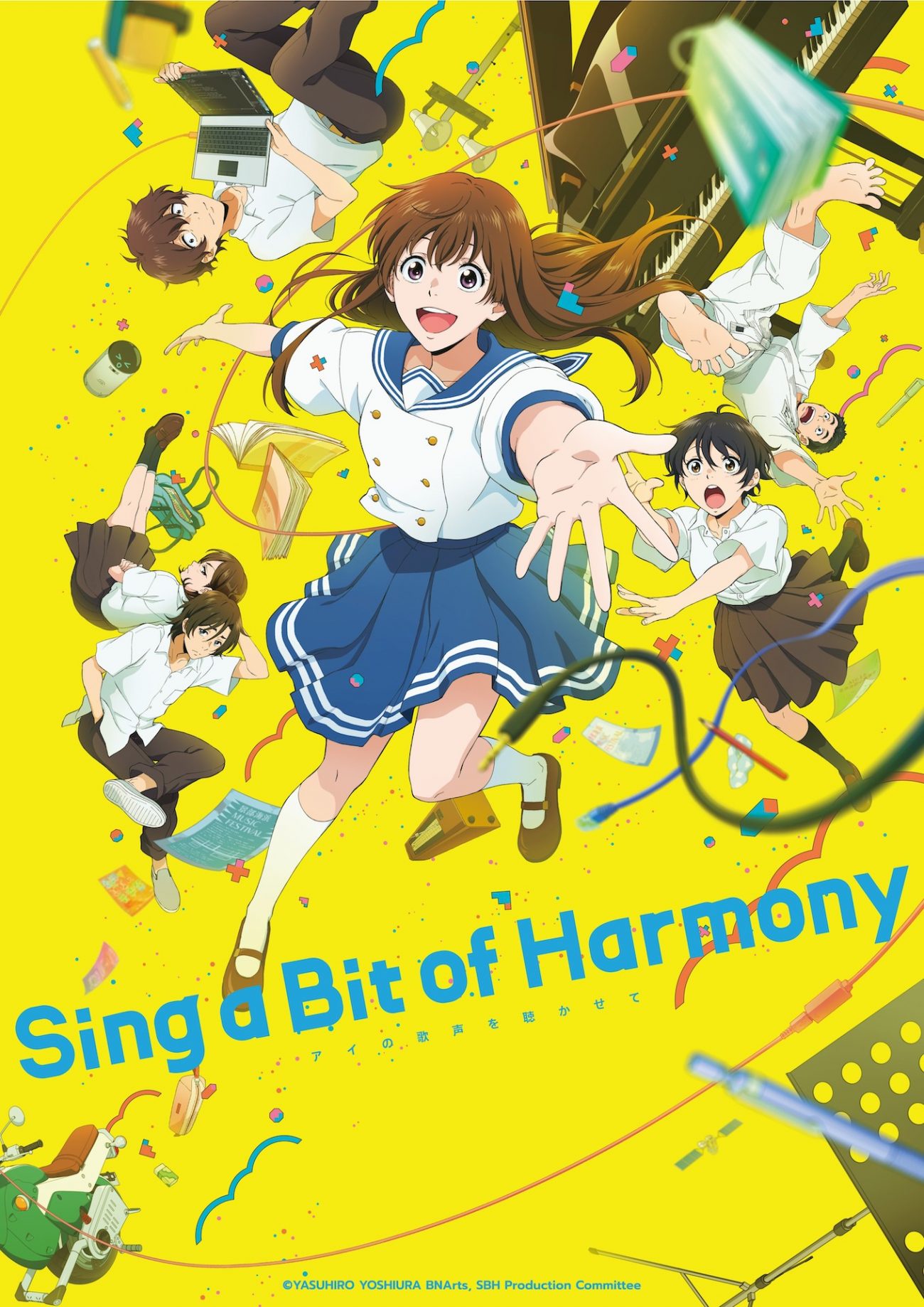 ANIME/FILM REVIEW | "Harmony" Keeps in Tune with a Pitchy Story

It’s pretty surprising that there aren’t a lot of traditional musicals in anime. While idol shows have their extravagant numbers and the like, the music itself doesn’t normally match with the narrative that’s happening. Perhaps this is why Sing a Bit of Harmony — a coproduction between J.C.Staff (Food Wars!, EDENS ZERO) and Funimation — is something of a breath of fresh air. However, with this being one of the few anime musicals in recent memory, it does have some rust that needs a bit of shining.

An original production from Time of Eve director Yasuhiro Yoshiura, Sing a Bit of Harmony places its focus on Satomi (Risa Mei), an outcast student whose mother is about to test out a big artificial intelligence project. That project is Shion (Megan Shipman), a robot with true-to-life human capabilities who starts going to school as part of a test run. At first sight of Satomi, Shion latches by her side as she seeks to find what makes her happy. Alongside fellow geek Toma (Jordan Dash Cruz), judo student Thunder (Kamen Casey), and the shaky couple Aya & Gotchan (Alexis Tipton & Ian Sinclair), Satomi does her best to keep Shion’s robot identity a secret. 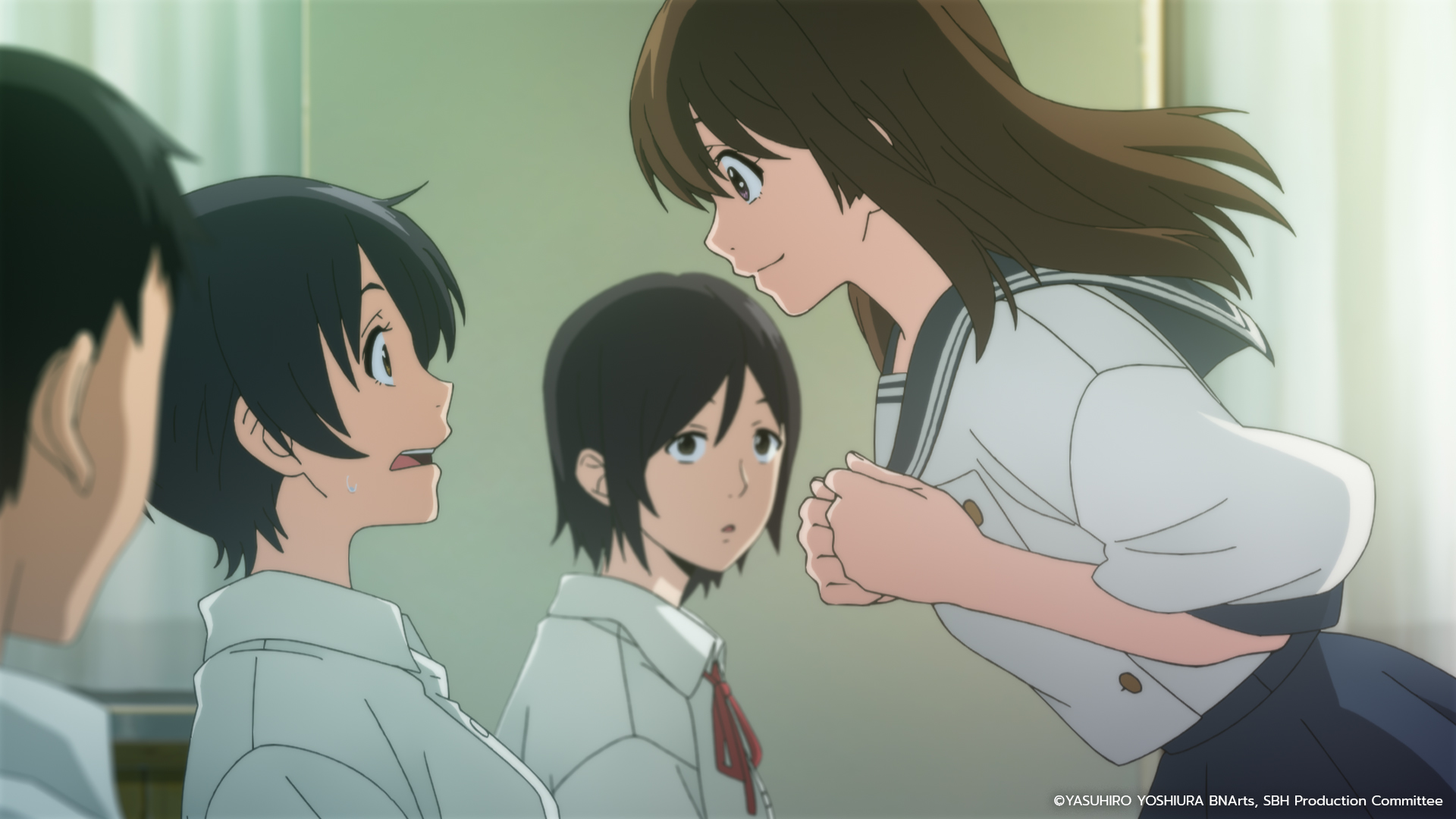 However, keeping that secret is easier said than done, as Shion’s ability to communicate with fellow machines is used to bring out musical numbers from wherever she pleases. With the aid of a song in her hard drive, Shion attempts to ease the troubles of her new friends, from Aya & Gotchan’s relationship issues to Thunder’s judo jitters. But the more extravagant Shion becomes, the more difficult it becomes to hide her true identity. And just Satomi seems to have found happiness, something comes around and tries to steal it away.

The first half of Sing a Bit of Harmony takes the stage with a few stumbles. How Shion enters the picture and presents herself to Satomi and the rest of her class feels a lot more awkward than whimsical. It tries to do that classical school intro we see in a lot of anime, only with a slight Disney twist. But instead of feeling like you’re being pulled into a Robert Lopez-penned musical, it instead has the tone of Eric Andre’s song-and-dance routine in Bad Trip. It’s entertaining, but you feel kind of weird being a witness to it. 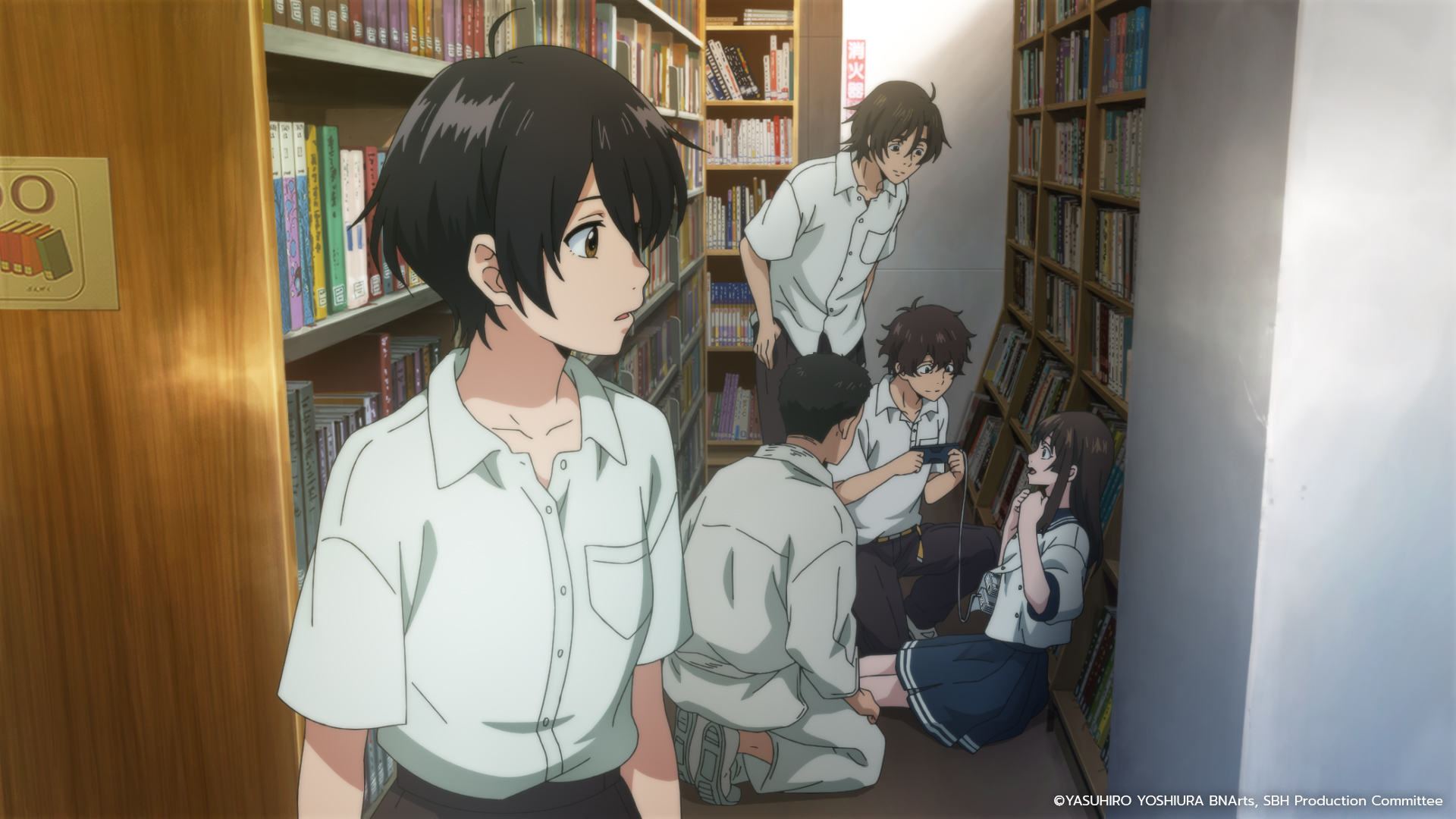 Fortunately, after a couple of shaky areas, the film starts to have legs when the conflict regarding Shion’s identity is put into play. On top of that, Shion’s skills are used to the best of their abilities, ranging from sparring with Thunder to getting Gotchan to reveal his insecurities. It’s the connection between Satomi and Toma where Shion finds her greatest challenge, and her solution brings out one of the most colorful and lively musical numbers in the entire film. (Considering the film-within-a-film “Moon Princess” obviously being their answer to a Disney princess film, it’s easy to see some of its homages to the House of Mouse in the number.)

It’s at that moment where the film becomes a race against time, as Shion’s existence is put into jeopardy by the very company that created her. Worse, Satomi’s entire life is put in danger, with her mother’s career possibly finished because of certain jealous parties in her field. This moment is where Sing a Bit of Harmony starts firing on all of its narrative cylinders, with the students planning to save Shion after a big reveal of how long she’s been watching over Satomi. (Whether you find that reveal to be endearing or disturbing depends on how one feels about artificial intelligence evolving.) 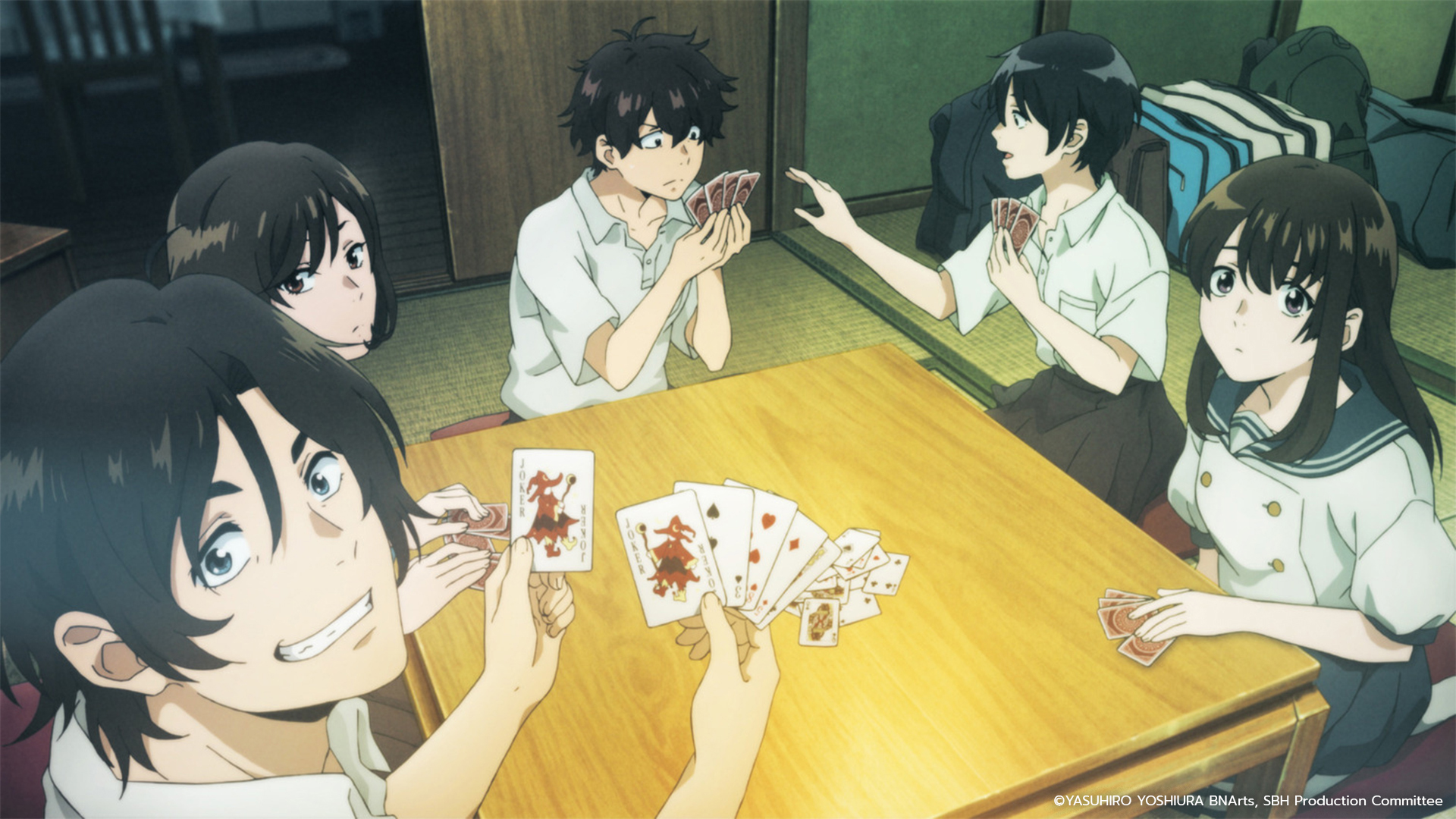 Even if it’s awkward at first, the musical numbers are very impressive in places. Perhaps the most fun one involves Shion assisting Thunder, with their judo practice evolving into the most hilariously violent tango imaginable. It’s also worth noting how well the English dub managed to match the rhythm of the original Japanese songs, as both languages have very polar opposite musical beats. Much of that credit goes to ADR Song Director Brina Palencia, whose made a name for herself in and out of the anime realm with her songstress skills.

Also as strong as the musical elements is the dub itself. Shipman captures a wonderful amount of positivity as Shion, while Mei’s Satomi bounces between her happier and sadder sides. Sinclair, who’s better known for his confident performances in Space Dandy and Haikyū!!, shows a more reserved side as Gotchan, with his battles with his self-conscience being some of the most relatable moments of the film. Cruz gets Toma’s smart-yet-shy personality down pat, while Tipton’s Aya does some well-rounded evolving from ice princess to reliable friend throughout the film. 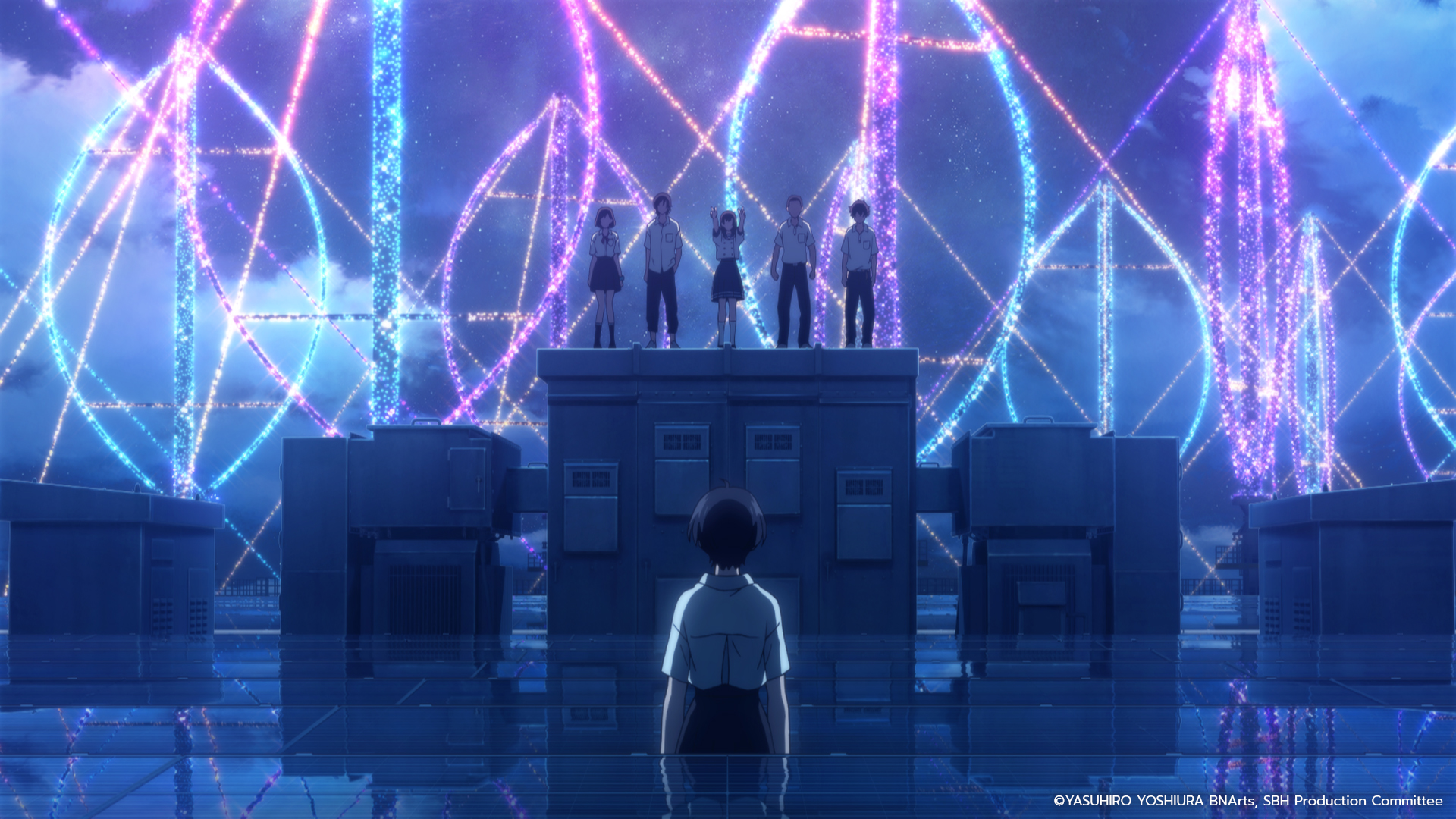 Visually, this is J.C.Staff at their absolute best. From the countryside scenery and the robots working in the fields to the big climatic rescue in the end, every frame of Sing a Bit of Harmony is fluid, beautiful, and mesmerizing. While it’s no Miyazaki or Hosoda production, it goes to show just how much attention to detail Yoshiura places into each of his creations.

Sing a Bit of Harmony may have its flaws, but it delivers an outstanding second half that shows just how artificial intelligence can evolve in the right ways. It has a bumpy start, but the story it winds up becoming pays off in the long run. The message the film has may not hit as strongly as some of the more recent films, but one can chalk it up to there being so many anime about the positives of AI. With that being said, I bet none of them can carry a tune as well as Sing a Bit of Harmony does!