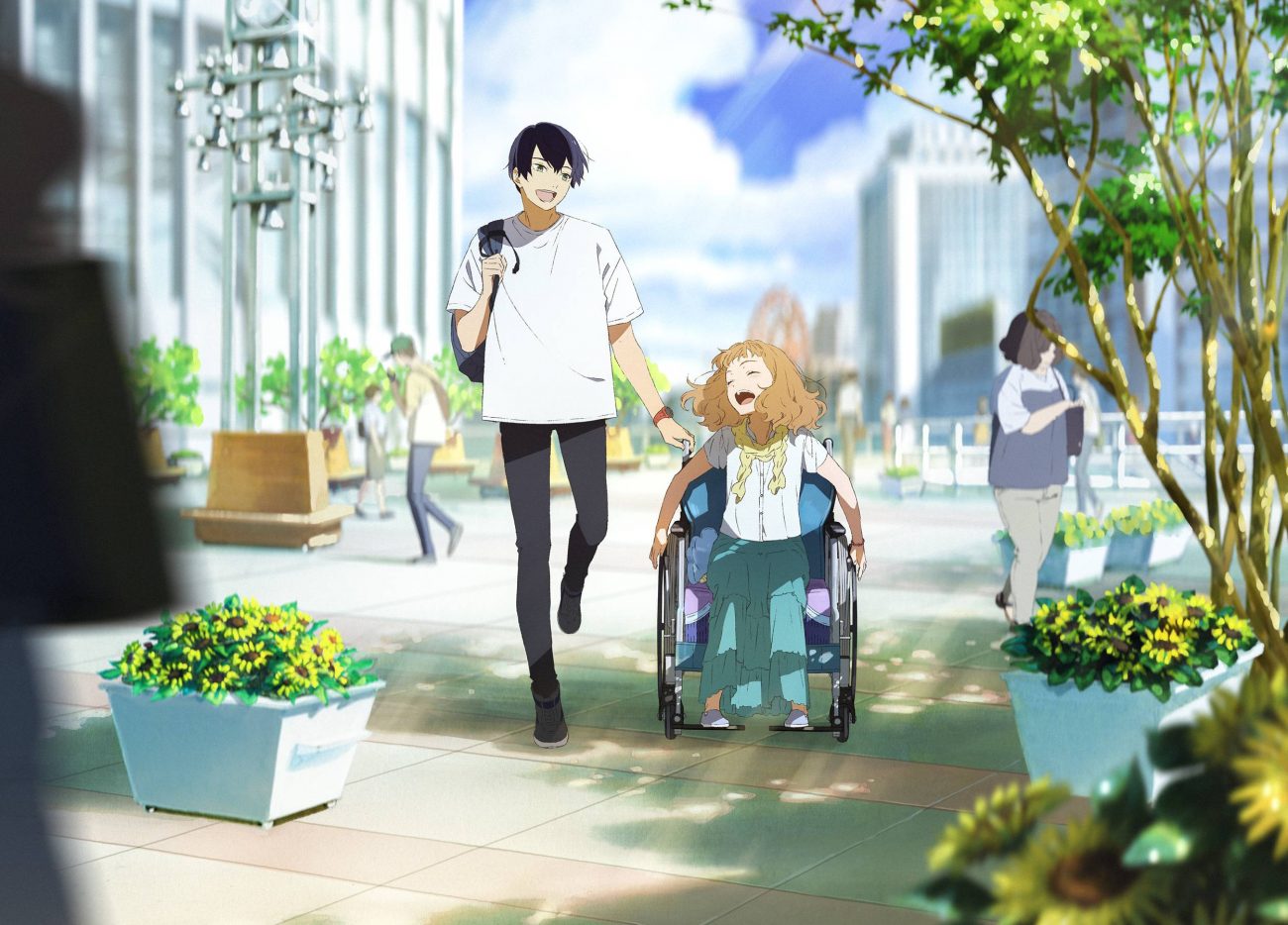 Deep down, every person has their purpose in life. This ambition drives us to push through the muck of negativity, in ways that will aim to prove the doubters wrong. Josee, the Tiger and the Fish is a movie about what happens when society and fate attempt to thwart any sort of desire one has. Despite a couple of bumps along the way, the latest film from Studio Bones (My Hero Academia, Carole & Tuesday) rolls on through with its uplifting narrative.

Based on a short short by Seiko Tanabe, Josee, the Tiger and the Fish follows Tsuneo (Taishi Nakagawa), an avid diver and college student who aims to study abroad in Mexico. While working home from one of his many jobs, Tsuneo has a literal run-in with Josee (Kaya Kiyohara), a disabled woman whose constantly in the care of her grandmother (Chiami Matsutera). Knowing that the student needs money for rent and school, the grandmother gives Tsuneo the job as caretaker for Josee. The woman reluctantly lets the strange man help her out, with him struggling to get along with her.

It’s a moment where Josee asks to go see the sea when Tsuneo has a breakthrough with her. Soon she rediscovers the world around her, experiencing libraries, theme parks, and even the taste of salt water for the first time. At the library, Josee finds a new purpose: to become an artist. However, after the passing of her grandmother, things go a little sour between Tsuneo and Josee, leading up towards a frightening situation that changes the perception of both of their lives.

In a way, Josee, the Tiger and the Fish has a similar story to the 2011 French film The Intouchables. Like that film, the relationship between Josee and Tsuneo starts off on a rocky path, only with the disabled girl wanting nothing to do with the reluctant boy that’s entered his life. However, as time goes on, the two begin to bond over his love for the sea and her love to create art. As such, they both find a new level of strength within one another, something that comes in handy during the film’s third act.

There are moments where some of the drama feels shoehorned in for the sake of creating a problem. Josee’s feelings towards Tsuneo’s friend Mai (Yume Miyamoto) seem to be there solely to piece together a non-existent love triangle, with Mai not helping in the slightest to work something out. It’s a trope that’s been done far too many times in the likes of movies, TV, and anime, with almost nothing unique coming out of the situation. It’s a weak element to the narrative as a whole, as it basically tells the viewer exactly who Tsuneo may fall for in the end.

However, it’s the treatment of Josee by the general public that will hit close to home for many disabled viewers. A scene at a subway station has her struggling to use the ticket machine, with no one giving her any sort of help or eye contact in the slightest. It’s a demonstration of the true hardships that handicapped people face in today’s society, as able-bodied people shun their very existence in both cold and cruel ways. This moment can be an uncomfortable watch, but it’s important to see it in order to try to better ourselves in the future.

It’s the film’s final act where that push to succeed and overcome the odds comes into play. Both Josee and Tsuneo have doubts about their futures, as the older generation pushes their dreams down to near-impossible levels. Moments in this film highlight the strengths of voice actors Nakagawa and Kiyohara, as their frustrations roar like a tiger caught in a trap. Despite the world telling them otherwise, giving up isn’t an option for either of them!

All of this is captured beautifully in Bones’s animation. Directed by Kotaro Tamura, the film showcases the beauty of the ocean depths in both realistic and fantastical ways. How the characters emote can seem a little cartoonish, but it emphasizes their emotions in a reasonable sense. American composer Evan Call (Violet Evergarden: The Movie, Appare-Ranman!) crafts a gorgeous array of musical compositions that blend with the feelings and moods of both characters and scenery alike.

Even if some of the drama is unnecessary, Josee, the Tiger and the Fish will still take hold of your heart. Whether it’s being treated as an equal or pushing through towards a passion, the film does a good job elevating the struggles of Josee and Tsueno in a relatable manner. It may not hit you in gut like A Silent Voice or The Diving Bell and the Butterfly, but Josee, the Tiger and the Fish will find ways to move your spirit like an ocean current.

GAME REVIEW | A Charming Revamp of...