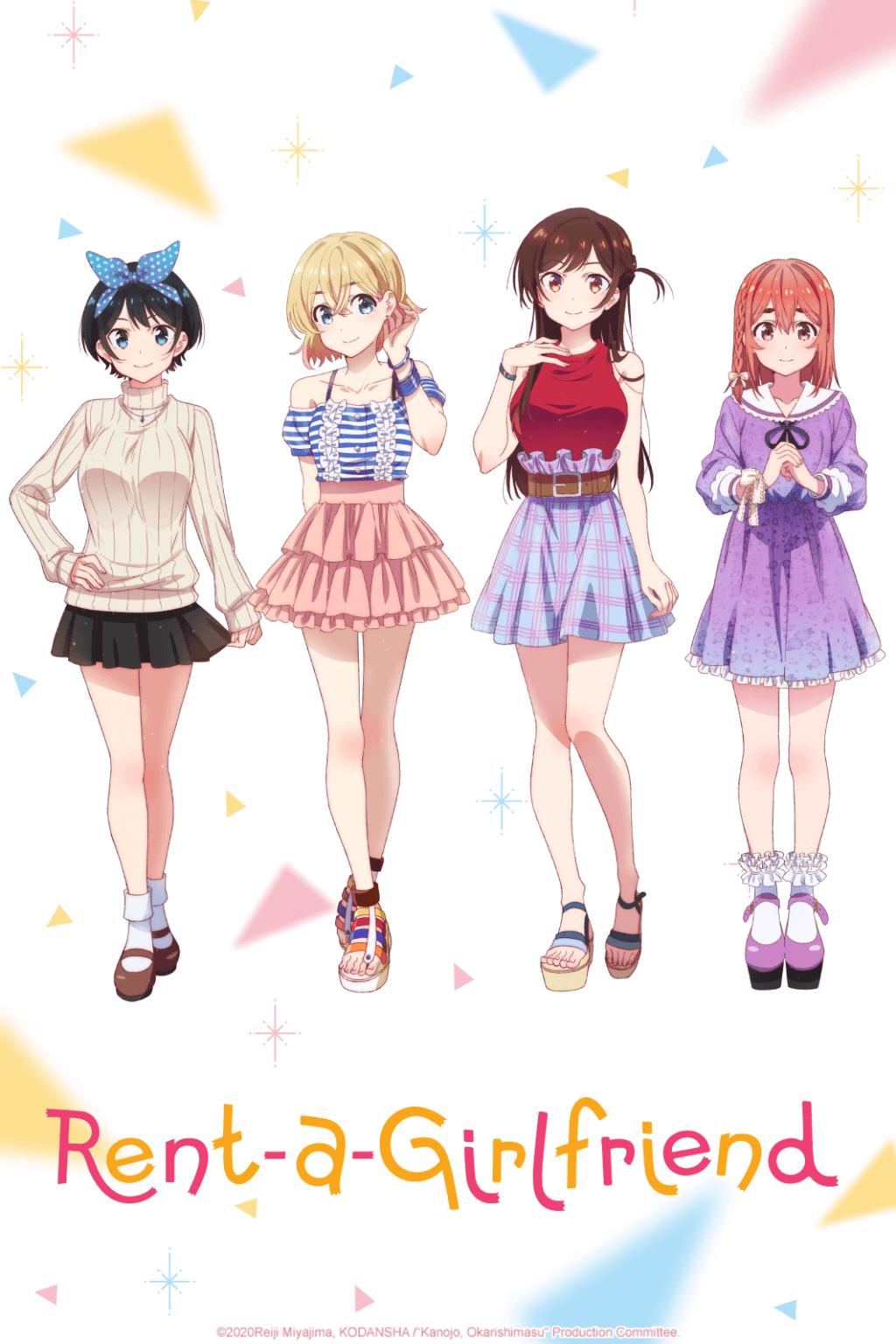 My least-favorite romantic comedies are the ones where two polar opposites pretend to be a couple to save face. Movies like Just Go With It, The Proposal, and just about every single Hallmark Movie-of-the-Week that isn’t a Christmas film give me this feeling of cringe all over my body. They’re badly acted, poorly executed, and — to no one’s surprise — always predictable, with the same ending every single time. Rent-A-Girlfriend is, to be blunt, one of these awful movies in anime form!

Based on the manga by Reiji Miyajima, Rent-A-Girlfriend follows Kazuya (Shun Horie), whose girlfriend Mami (Aoi Yuki) just broke up with him. After taking out his frustration with some porn, he stumbles across an app that let’s lonely people rent a girlfriend for the day. Desperate, he tries the service out, renting a girl named Chizuru (Sora Amamiya), who gives him a great time. However, upon finding out that she does the same thing with these guys on every date, he leaves a bad review for her, and rents her again(!) to deliver his anger to her face. Fortunately, Chizuru puts him in his place, and they prepare to never see each other again. 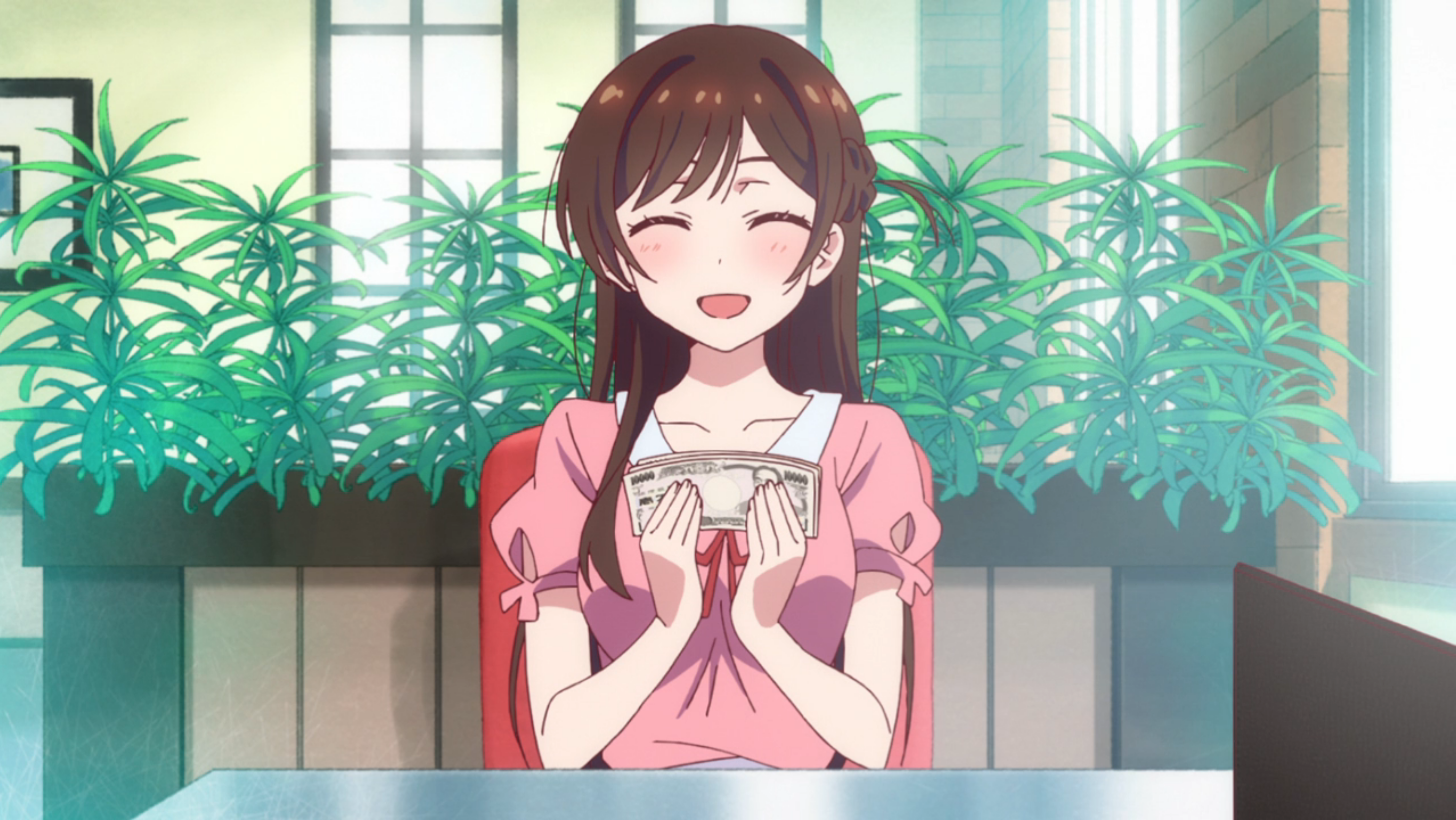 That’s when Kazuya gets a phone call that his grandma has been rushed to the hospital. He and Chizuru check to see if it’s okay, with the rent-a-girlfriend accidentally introducing herself as his girlfriend. To make things more awkward, Chizuru’s own grandmother winds up becoming friends with Kazuya’s resulting in the two of them having to put on a show for them whenever needed. It gets even more stranger with Kazuya’s friends are drawn into the act, as well as his ex Mami. As time goes by, Kazuya and Chizuru do their best to pretend to be a couple...so long as Kazuya’s got enough bank.

There are a lot of problems with Rent-A-Girlfriend’s narrative. On top of being a very similar plot line as all of those bad movies I mentioned before, it does nothing to add freshness to the formula. You watch this anime, and you already know deep down that both Kazuya and Chizuru are destined to be together. What makes it worse is that the character of Kazuya is very undeserving of this sort of happiness. 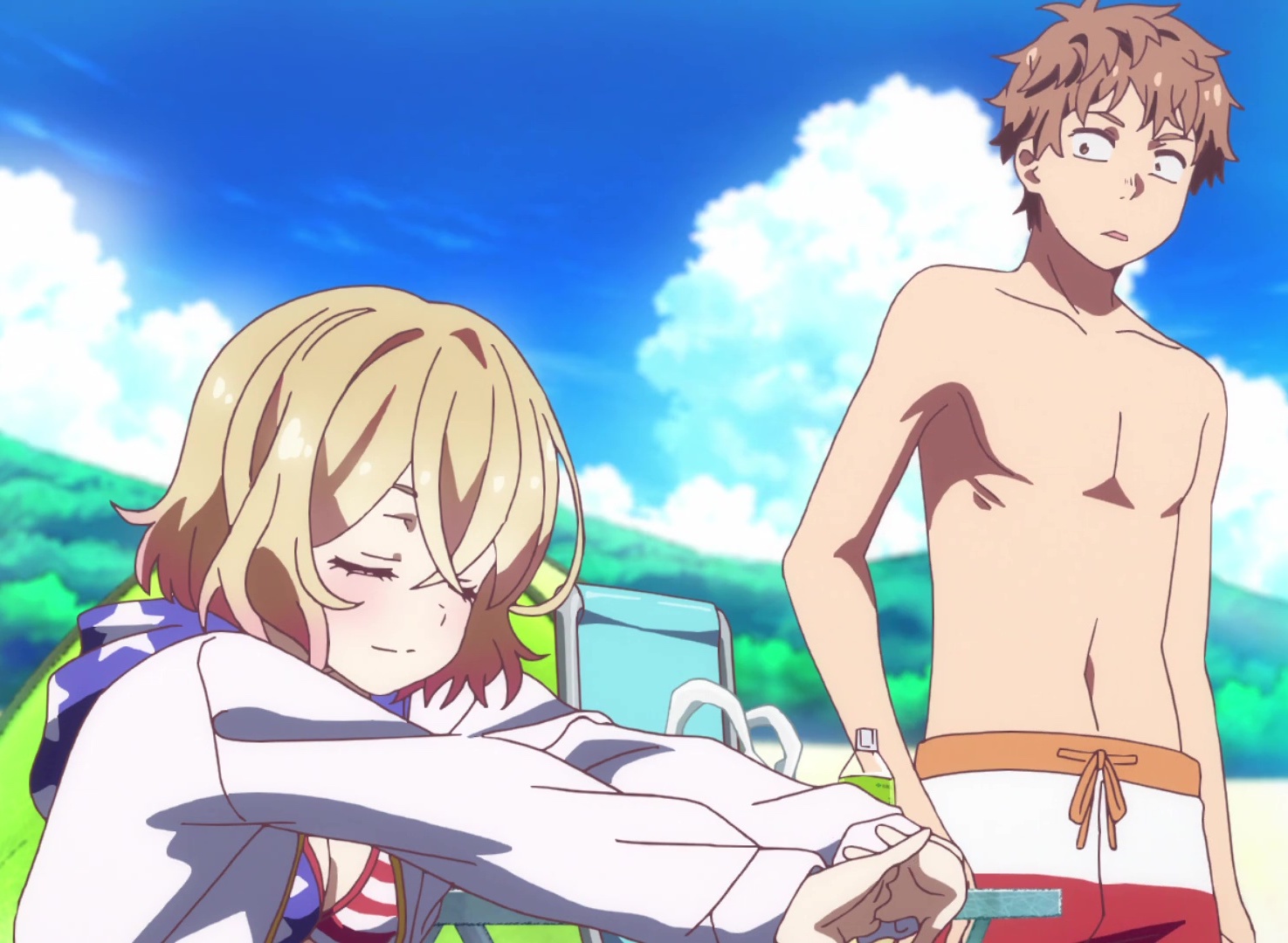 Kazuya is, to be blunt, kind of a scumbag. His mannerisms are very incel-like, ranging from his treatment of Chizuru in the first episode to his stalker mannerisms that peek out from here to there throughout the first season’s run. Even worse is that when a legit nice girl that actually likes him for who he is named Ruka (Nao Toyama) enters the picture, he either still holds onto his current feelings for the uninterested Chizuru and the seriously uninterested Mami. He doesn’t know what he wants, nor does he truly open his eyes when a great opportunity for happiness lands on his lap. (It reminds me a lot of how I felt about the MC in Masamune-kun’s Revenge, who chose vengeance over someone who genuinely liked him.)

It’s worse when he finds himself surrounded by female characters that are very well-written. There’s a lot of character in both Chizuru and Ruka, who have their reasons for being a part of the rent-a-girlfriend service. The personalities demonstrated throughout the season go all over the place, but do so in a way that make them seem more human than cartoon character. You want to root for them to find their own happiness, as their emotions and feelings come off as genuine and relatable. Of course, it makes it hard to root for them when their grand prize is a sentient pile of splooge-filled crumpled-up tissues. 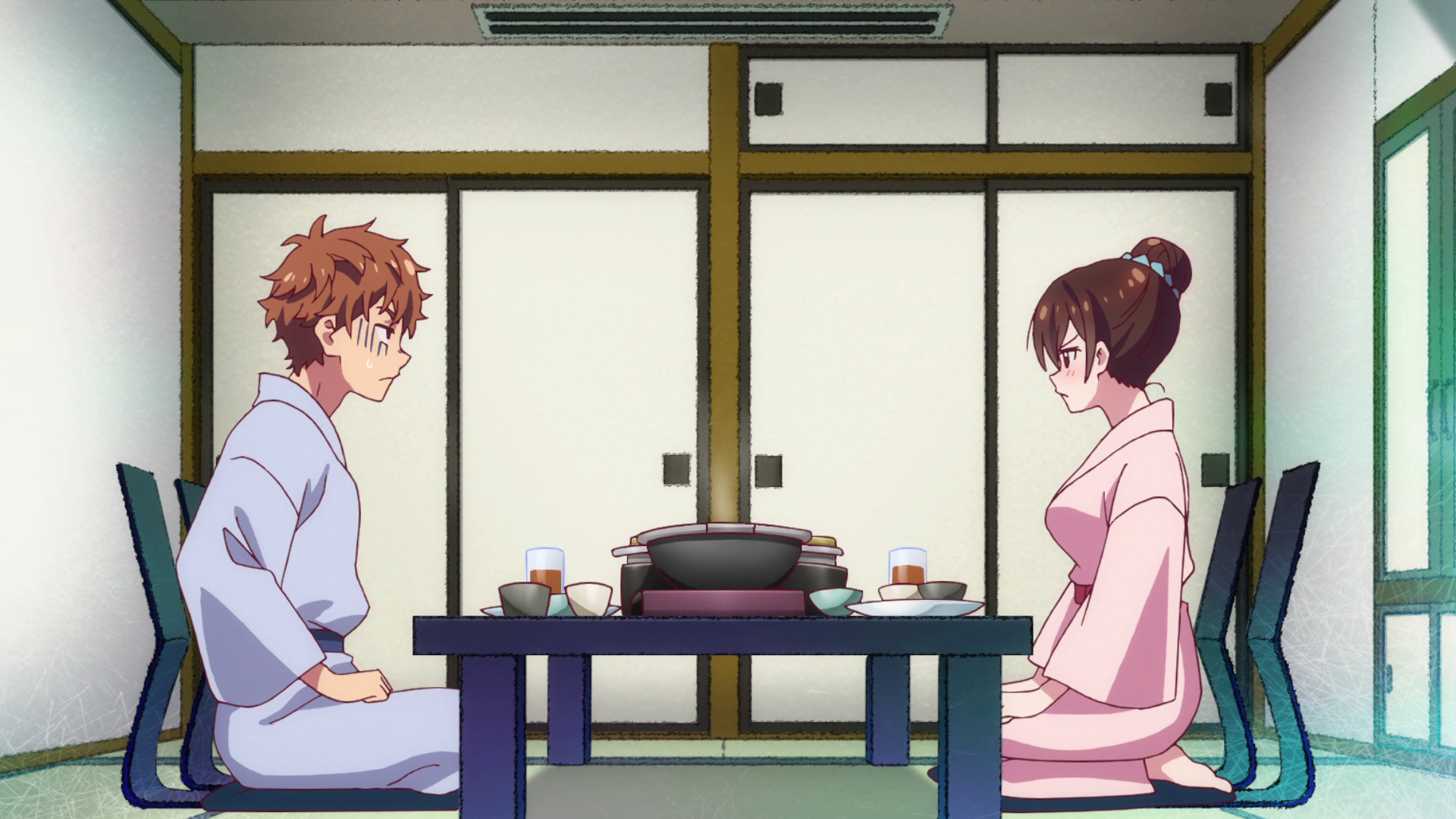 Perhaps that’s why I found myself enjoying Mami’s character turn towards the first season’s end, despite her nastiness. At first, she seems like a good person who just doesn’t know what she wants out of a relationship. But as Chizuru and even Ruka get closer to Kazuya, you began to see her true self, one that is filled with the urge to destroy things that she wants in life. The fact that she’s scum herself makes her a surprising fit for her ex, in a way that makes you want to root for her to swoop in and take back Kazuya so the two of them can jump off a cliff together! (Basically, Mami became the Nancy Spungen to Kazuya’s Sid Vicious.)

Introduced later in the series, Sumi (Rie Takahashi) makes for the fourth woman to enter Kazuya’s life. Her shy personality made it all the more enjoyable to watch her antics, with the MC actually being nice to her throughout their date. (Of course, he’s doing this solely as a favor for Chizuru, with his own ulterior motives behind his agreement.) Although not a mainstay of Rent-A-Girlfriend, she winds up being a very memorable character that shines through her faults, one that could and should lead to her own spinoff series, preferably far away from the rest of the cast. 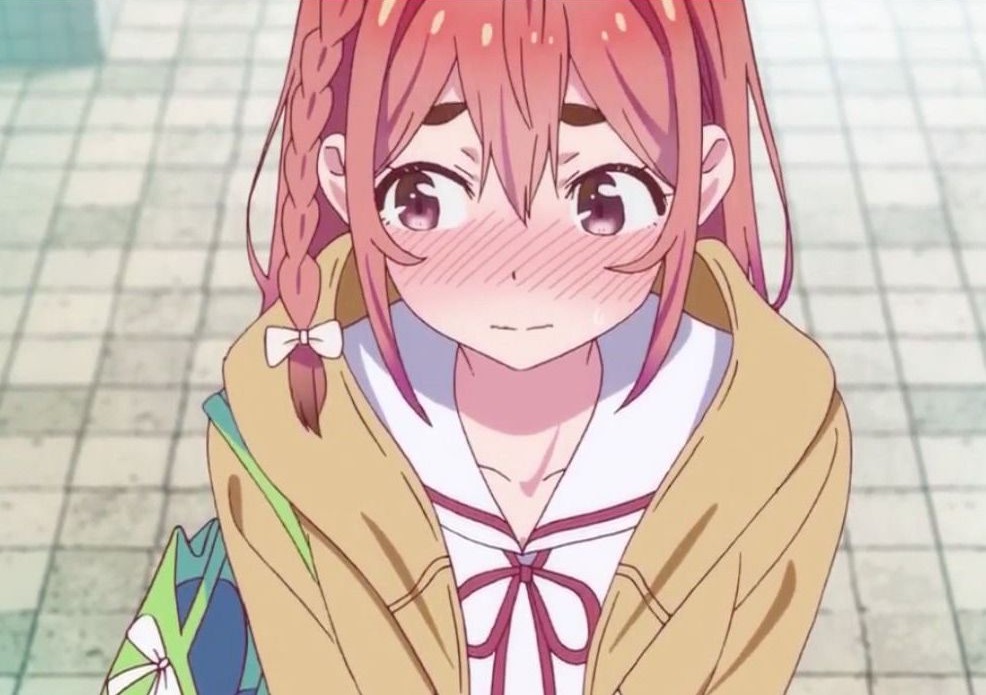 This does lead me to the best thing about Rent-A-Girlfriend: its voice cast. Having seiyuu A-listers like Amamiya, Yuki, Toyama, and Takahashi certainly help with getting more people to watch, as they do a great job with the roles they’re given. The same can be said about Horie, whose Kazuya acts as scummy as he’s voiced. However, if the producers were hoping that Horie’s acting would make the MC come off as relatable, then they were greatly mistaken.

I was genuinely surprised to see TMS Entertainment (Dr. STONE, Lupin The Third) listed as its animation studio, as it doesn’t quite fit their motif. Nevertheless, they do a good job with showcasing the cuteness of Chizuru and Ruka, as well as the grouchiness of Kazuya. However, there are times when the characters and their movements came off a little choppy. It’s certainly pretty to look at, but the motion aspect is not their best work. Also weird are some of the backgrounds, which come off as either jagged or filled with transparent scribbles. 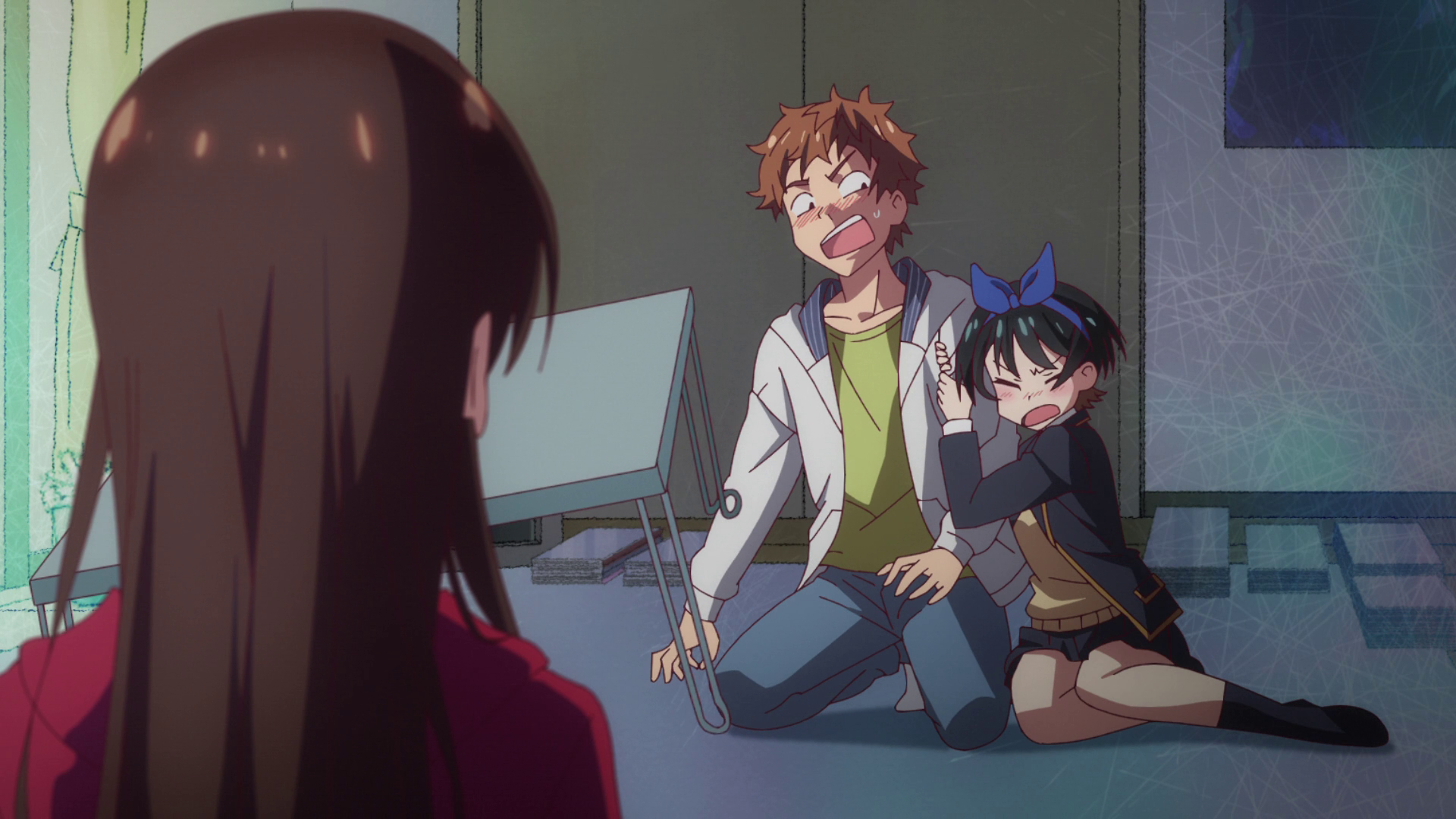 Nichijou theme song performer Hyadain takes control of the musical score, which is pretty bouncy and filled with nods to chiptune and pop music. They certainly do their best to add a little more character to what’s happen onscreen, only to overshadow the show itself due to it having a better personality than a good chunk of the characters on-screen. Opening theme “Centimeter” is another solid hit for the peggies, who have yet to do wrong when it comes to contributing anime songs. Halca contributes two very catchy end themes, in the form of the main song “Kokuhaku Bungee Jump” and the one-off “First Drop” in Episode 7.

Alas, not even a mixture of solid voice acting, great soundtrack, and some good animation can rescue the story that Rent-A-Girlfriend attempted to tell. It falls victim to one too many rom-com clichés, many of which had at the very least a better main character to root for. Even how it ends makes it feel like Rent-A-Girlfriend just gave its viewers a poor attempt at a circle jerk, one that leads to zero satisfaction for anyone involved. Yes, it is getting a second season, but I honestly don’t see how anyone would want to stick around to see who’s the “lucky” girl to end up with Kazuya in the end.

Rent-A-Girlfriend can be viewed on Crunchyroll and VRV. Episodes 1-12 were observed for this review. Promotional consideration provided by Ellation.