HomeAnimeANIME REBUTTAL | Why I Was Wrong About "Nichijou - My Ordinary Life"

ANIME REBUTTAL | Why I Was Wrong About "Nichijou - My Ordinary Life" 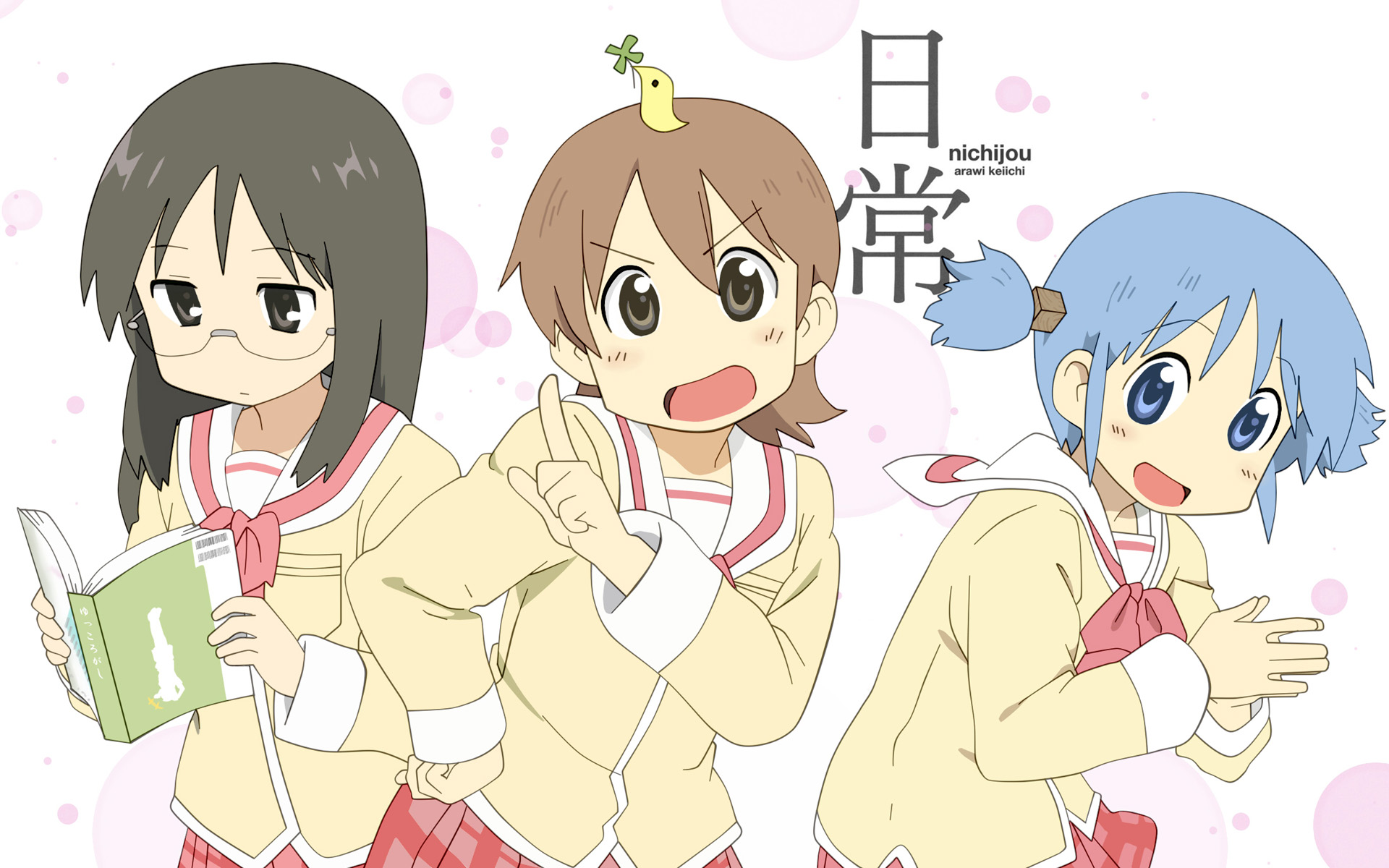 ANIME REBUTTAL | Why I Was Wrong About "Nichijou - My Ordinary Life"

Six years ago, I wrote a scathing review of the Kyoto Animation series Nichijou - My Ordinary Life. Based on the manga by Keiichi Arawi, the anime followed the not-so-average lives of high school students, an eight year-old professor & her robot, and various other characters that made the world as square as Mio's hair ties. Back then I called the show "dull" and having "nothing of interest." How I wish I can go back in time, find my 26 year-old self, and ask him what the hell was wrong with his mindset!

Thanks to the persistence of the Wicked Anime twins, I often found myself revisiting the world of Nichijou via random clips, GIFs, and heavy discussions on what makes an anime comedy more universal. On a random weekend, sometime after the show was released on Blu-Ray via Funimation years after its Japanese run, one of the brothers brought over the collection for us to sit down and watch. Upon pressing play, and after spending years thinking the series was utter trash, I realized how wrong that opinion truly was. Instantly I was reintroduced to hilarious bits, visual gags, and some of the most adorable characters in anime history. 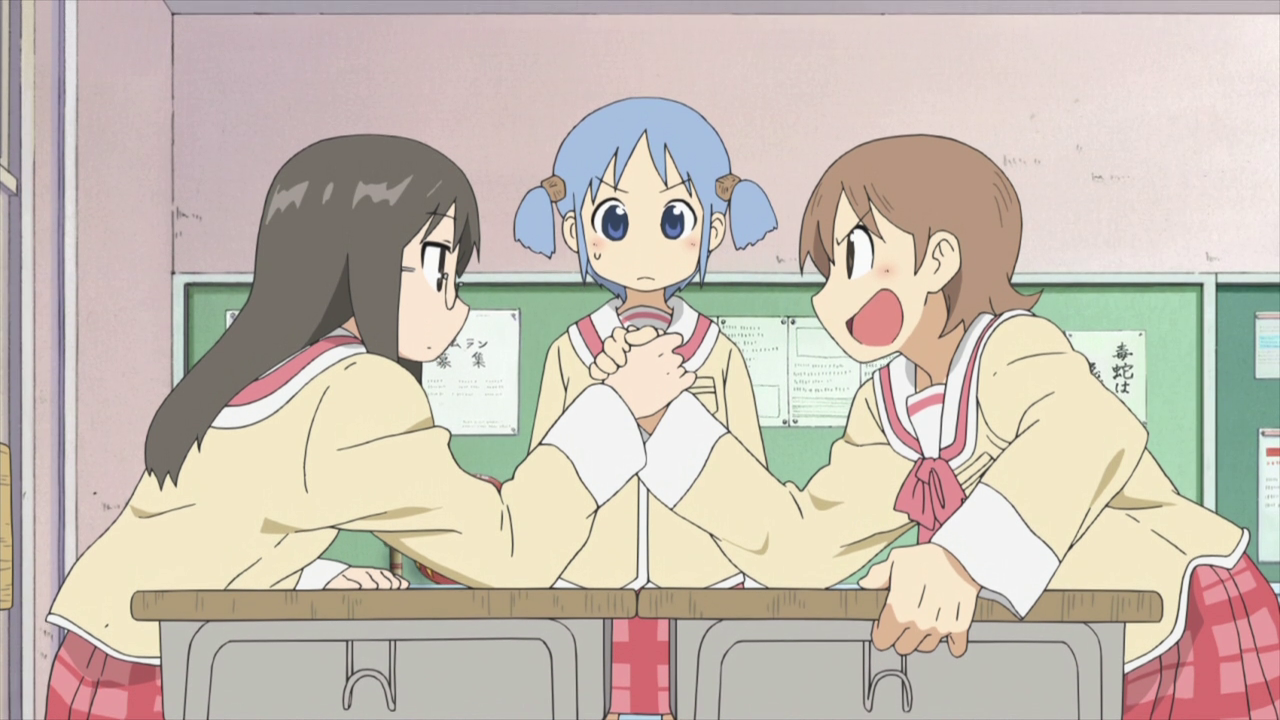 So what happened back then that made me hate Nichijou? Was there something going on in my personal life that was keeping me from enjoying something this, well, enjoyable? It was 2011 when the anime was released, originally posted on Crunchyroll before being pulled off of it for reasons unknown, nearly two years into Boston Bastard Brigade's lifespan. However I do remember that this was during a dark time for anime, where the better series were being drowned out by horrible fan-service fare. Less meaningful plot, more boobs and stupid jokes that fell flat.

And in that mess was Nichijou, a show that had no real plot but instead went for gags and punchlines in a non sequitur fashion. What I thought was just another lump of coal was -- in fact -- a diamond of an anime that was actually clever, hilarious, and unpredictable in just about every way. Mind you there are still jokes that still go over my head due to a cultural gap, but for the most part it's legit funny. On top of that, it also features some of the best visuals that Kyoto Animation has ever done, be it a chase sequence throughout a hallway or even a simple scene of Hakase angrily throwing her popcorn when she failed to do a simple trick. 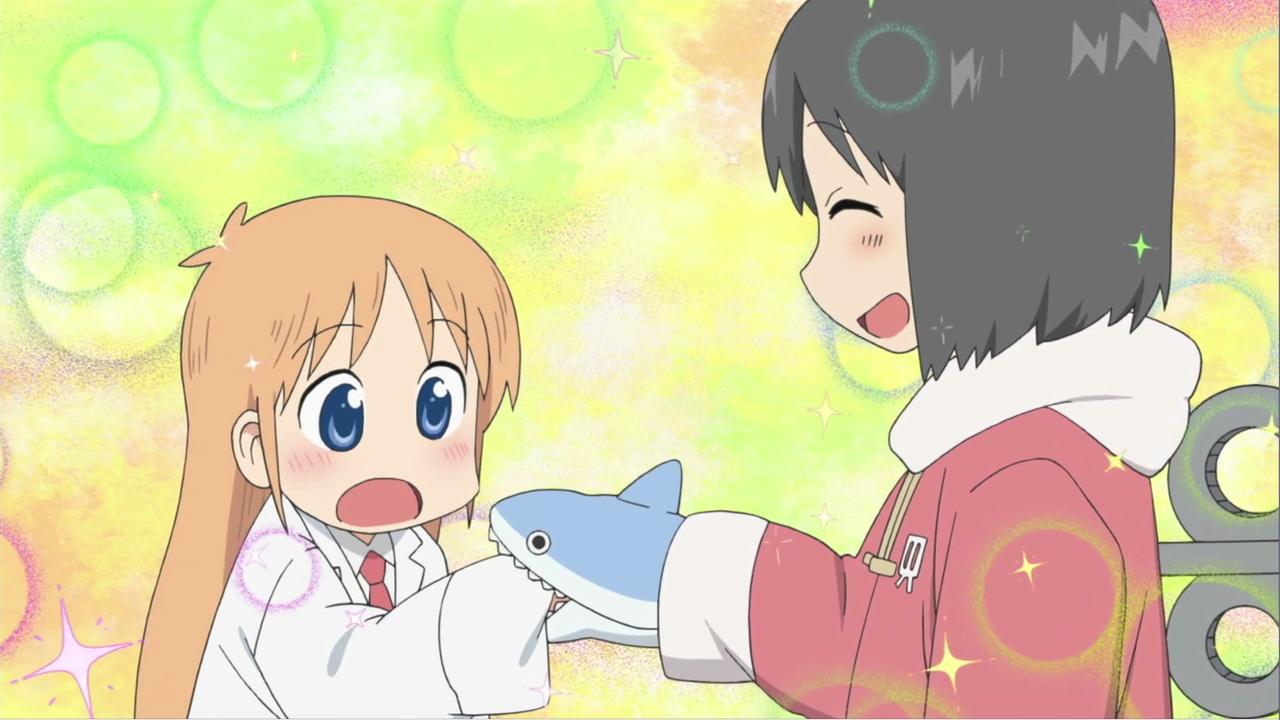 Viewing Nichijou a second time also probably picked out what turned me off initially about its original Crunchyroll run, and that was how it was translated. Funimation's version goes for a more straight translation of the gags and jokes, whereas the Crunchyroll one back then Americanized some of the bits. I recall in Episode Five when the naturally mohawk-haired Tsuyoshi went to visit a medium, and in Crunchyroll's version he asked her to call upon the spirit of Bob Hope. (This was also the bit that made me shut off the episode and initially swear off the series for good, due to it not making any sort of sense.) In the Blu-Ray version he was asking for the spirit of soap, playing with his beliefs that mediums are nothing but hoopla. Because it was translated properly by Funimation, the joke actually worked better.

Sometimes having an anime comedy be Americanized can help it sell better in North America. It worked well for the likes of Sgt. Frog and Crayon Shin-chan, as there was room for adapting the Japanese scripts to fit with an English-speaking audience. The problem with Nichijou is that a lot of the humor both vocally and visually fits more with Japan's culture than anything else outside of the world. While the visual gags are presented in a way that will make anyone laugh, you will have to have been a fan of anime for quite some time before diving into Nichijou to fully understand all its humor. 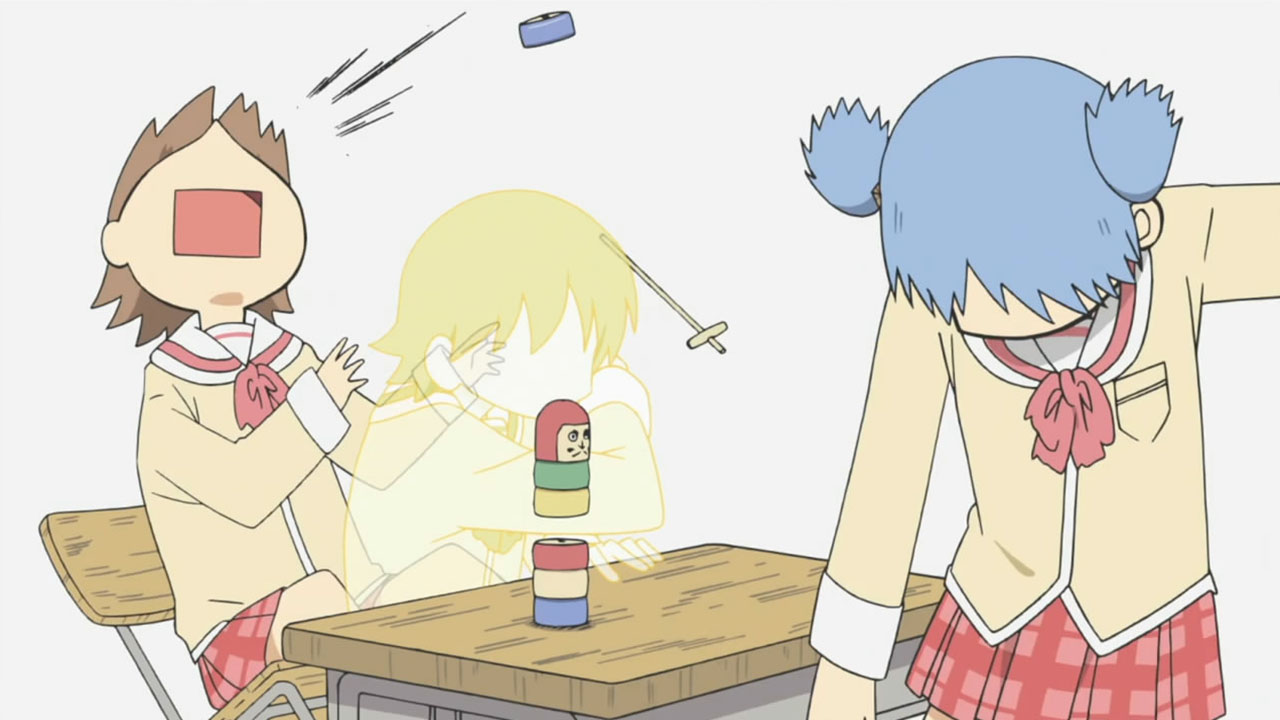 Thankfully I have been watching anime for nearly twenty years, meaning the style of Japanese humor comes naturally to me these days than it did when I was just starting out. Granted there are still shows that still feel more appropriate for a Japanese audience rather than a worldwide one, but those rarely find their way across the ocean to begin with. Because of my understanding, I get the humor of Nichijou more than someone who has zero knowledge of anime culture and the like. (Odds are if you've been watching anime for a long time, then you'll more than likely get the comedic style that Arawi's concoction is presenting.)

So after all this, do I now recommend people watch Nichijou - My Ordinary Life? Honestly, it would depend on your taste in humor. If you like nonsensical jokes, then it'll be right up your alley. However if you prefer your comedy to have a point, then you're flat out of luck. I'm happy that I decided to give Nichijou a second chance, in the same way I was glad to be swayed over once more by both Mr. Osomatsu and Yurikuma Arashi. 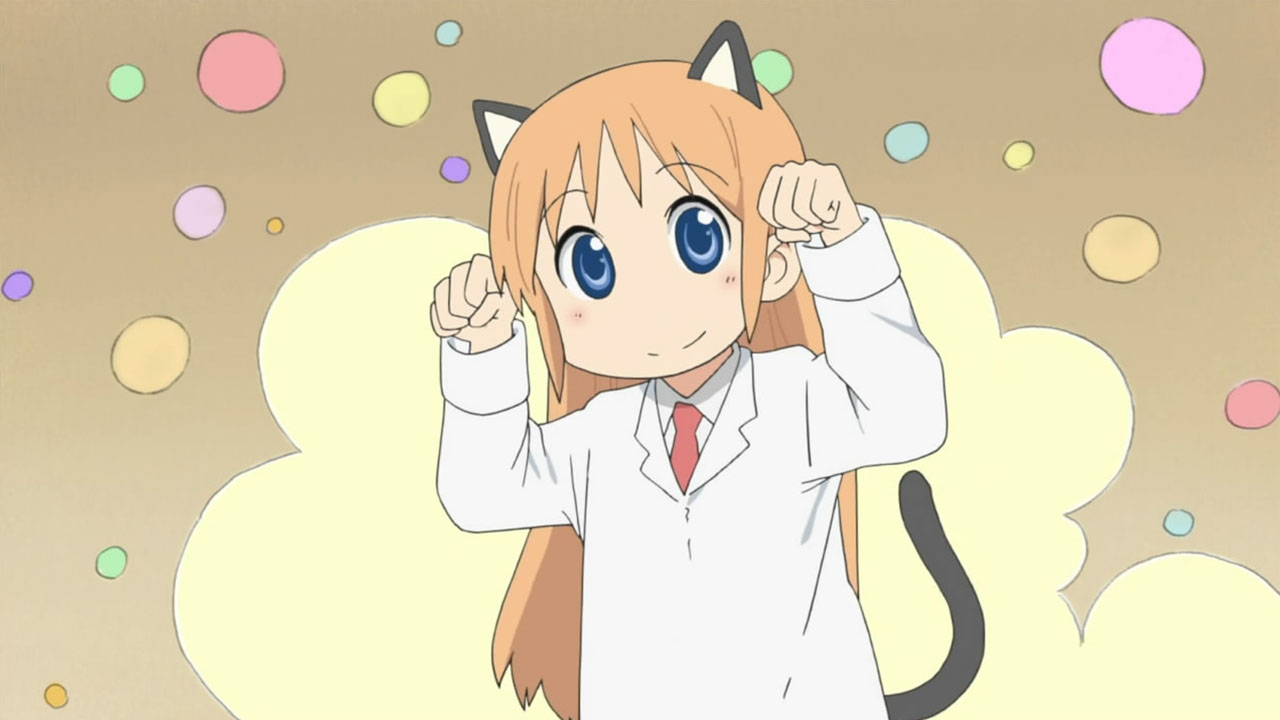 Perhaps as one gets older and their tastes change, there comes a level of appreciation for something you didn't like at first that'll blossom unexpectedly. Food, movies, anime, and TV series you once loved you now feel embarrassed for liking, and on the other side of the spectrum there are forms of entertainment and culinary pieces you once hated that you now love. Sometimes it takes a few months, others a few years, but in the end it is always good to give things a second chance, even if you find yourself kicking and screaming towards it. I am glad to have given Nichijou - My Ordinary Life another shot, as I can now appreciate it for what it is: an all-nonsense crazy time that'll leave anime fans with their sides aching.

With that being said, don't ask me to give Oreimo another chance. That's one terrible series I'm still sticking my guns to, especially now that I know how it ends.