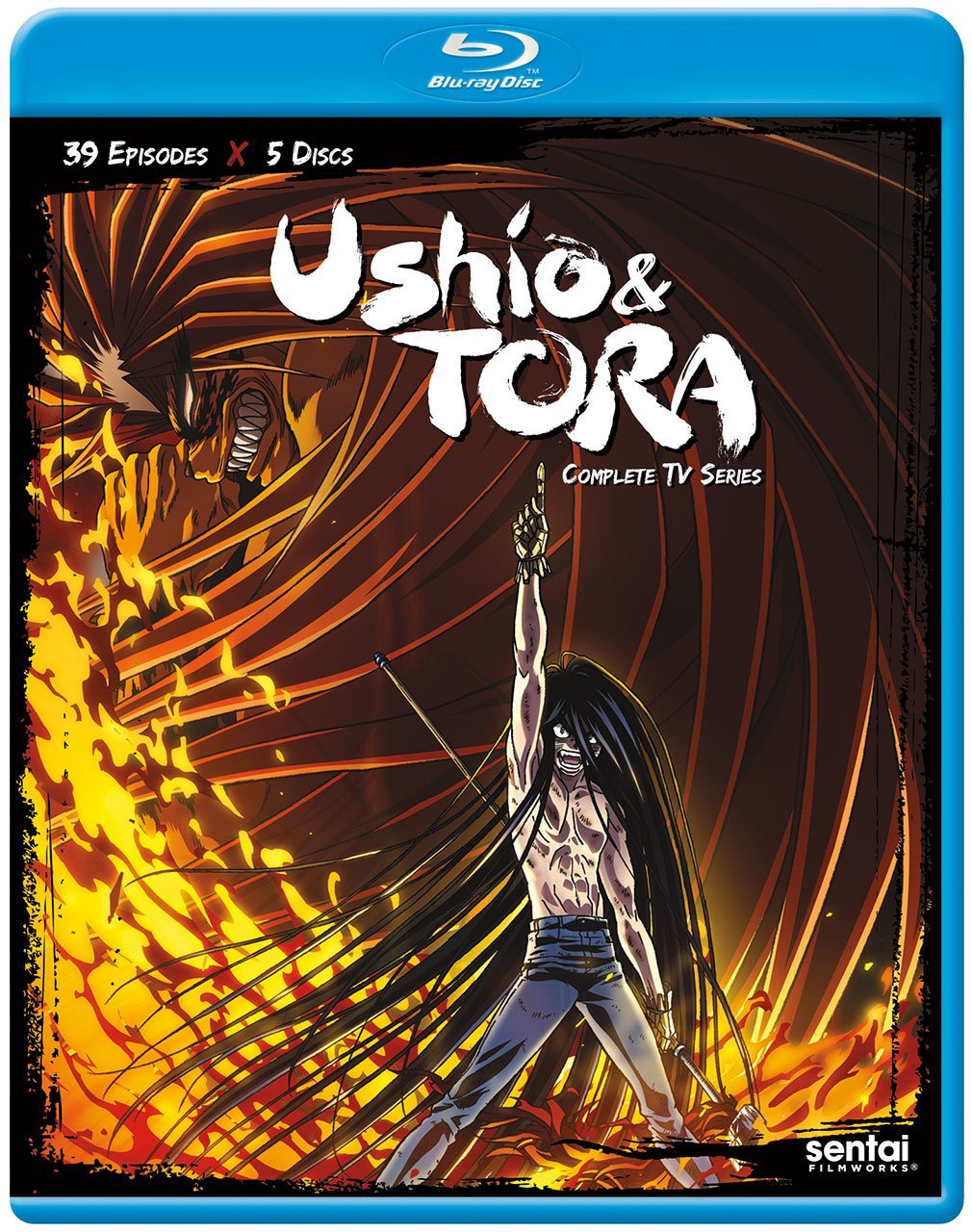 It goes without saying that Ushio & Tora is a byproduct of the 1990s. Written by Kazuhiro Fujita, the original manga was a staple for wanton violence, laugh-out-loud humor, and supreme manliness; in other words, a Schwarzenegger film put to paper. While it did get a ten-episode OVA series early in its lifespan, an attempt of a full anime covering its entire boy-meets-beast had not been fully realized. That is, until MAPPA (Yuri on Ice, Kids on the Slope) and Studio VOLN (Idol Incidents) teamed up nearly twenty years after the manga ended to bring this story to life.

For those waiting a long time for a legit adaptation of Ushio & Tora to be animated, your patience has been rewarded immensely.

The anime focuses its main attention on Ushio Aotsuki (Tasuku Hatanaka/David Matranga), the son of a priest and shaman. While his father is away Ushio stumbles upon a hidden door, which kept hidden a ferocious beast and the spear that kept him at bay. Upon the monster's awakening, thousands of spirits and yokai are awaken and threaten the daily lives of those in Japan. Making a deal with the monster, Ushio frees him and dubs the creature Tora (Rikiya Koyama/Brett Weaver), with the two setting out to defeat the evils of Japan whilst not trying to kill one another. 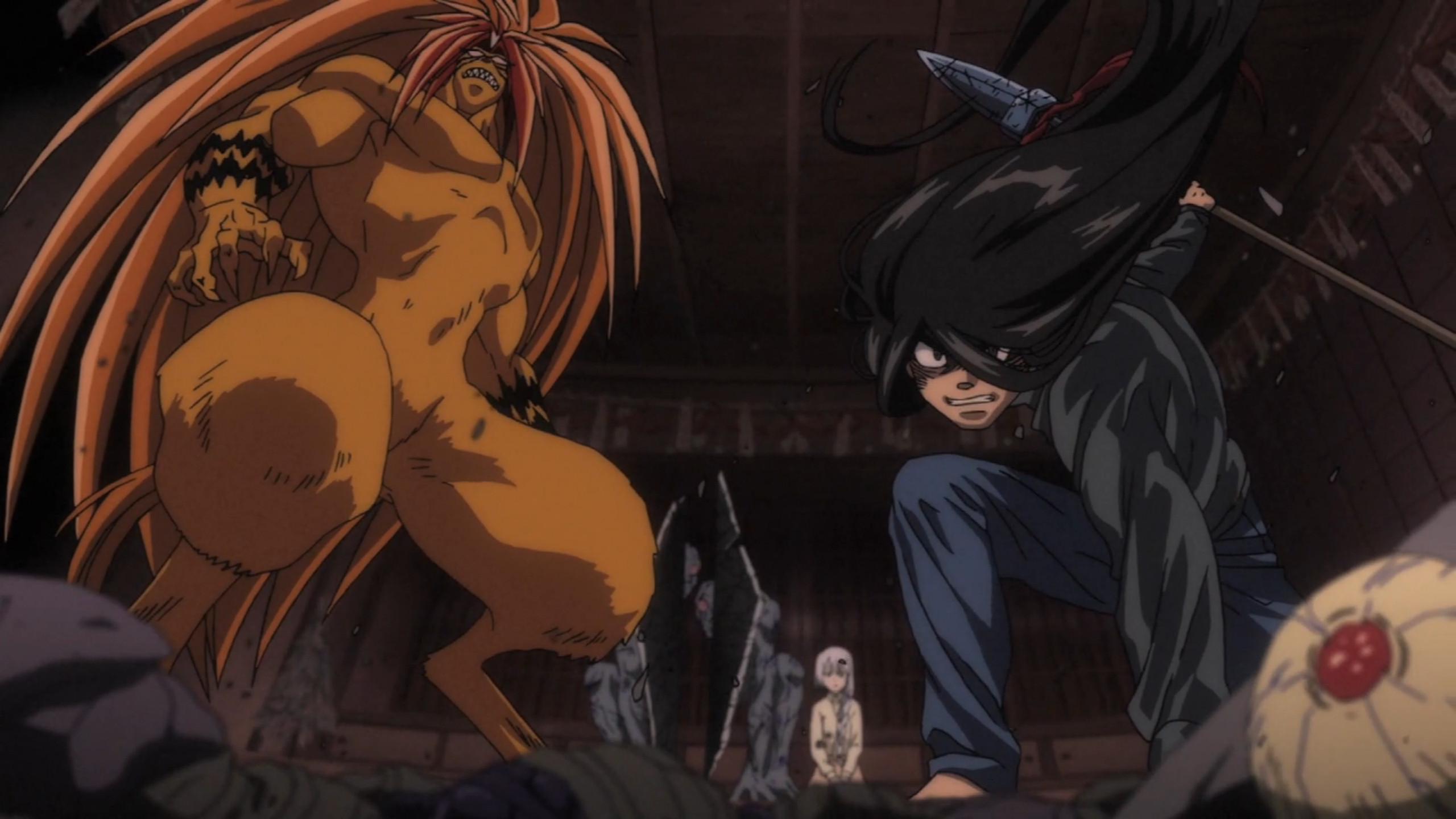 A lot is covered in its 39-episode run, from the duo's relationship with female friends Asako (Mikako Komatsu/Allison Sumrall) and Mayuko (Kiyono Yasuno/Luci Christian) and the whereabouts of Ushio's mother (Maaya Sakamoto/Emily Neves) to the powerful bond that is being mended together within the strength and spirit of our main characters. However the big plotline of Ushio & Tora involves the sinister being known as Hakumen no Mono (Megumi Hayashibara/John Swasey), a demon who has been kept at bay by Ushio's mother and other female shamans of Japan. With its escape imminent, it's up to the hero/anti-hero partnership to either keep it from happening or destroying it once and for all.

On paper it does seem like a lot is covered in this adaptation. Fortunately the pacing of the story keeps it from reaching overloading levels of exposition and flashback mumbo jumbo for its viewers. Thanks to a great balance of action-packed fight sequences and rip-roarious comedy, Ushio & Tora never tires itself out nor its audience with too much being thrown at it. Not to mention, it gives characters both main and secondary a chance to breathe and show why they matter in the story overall. 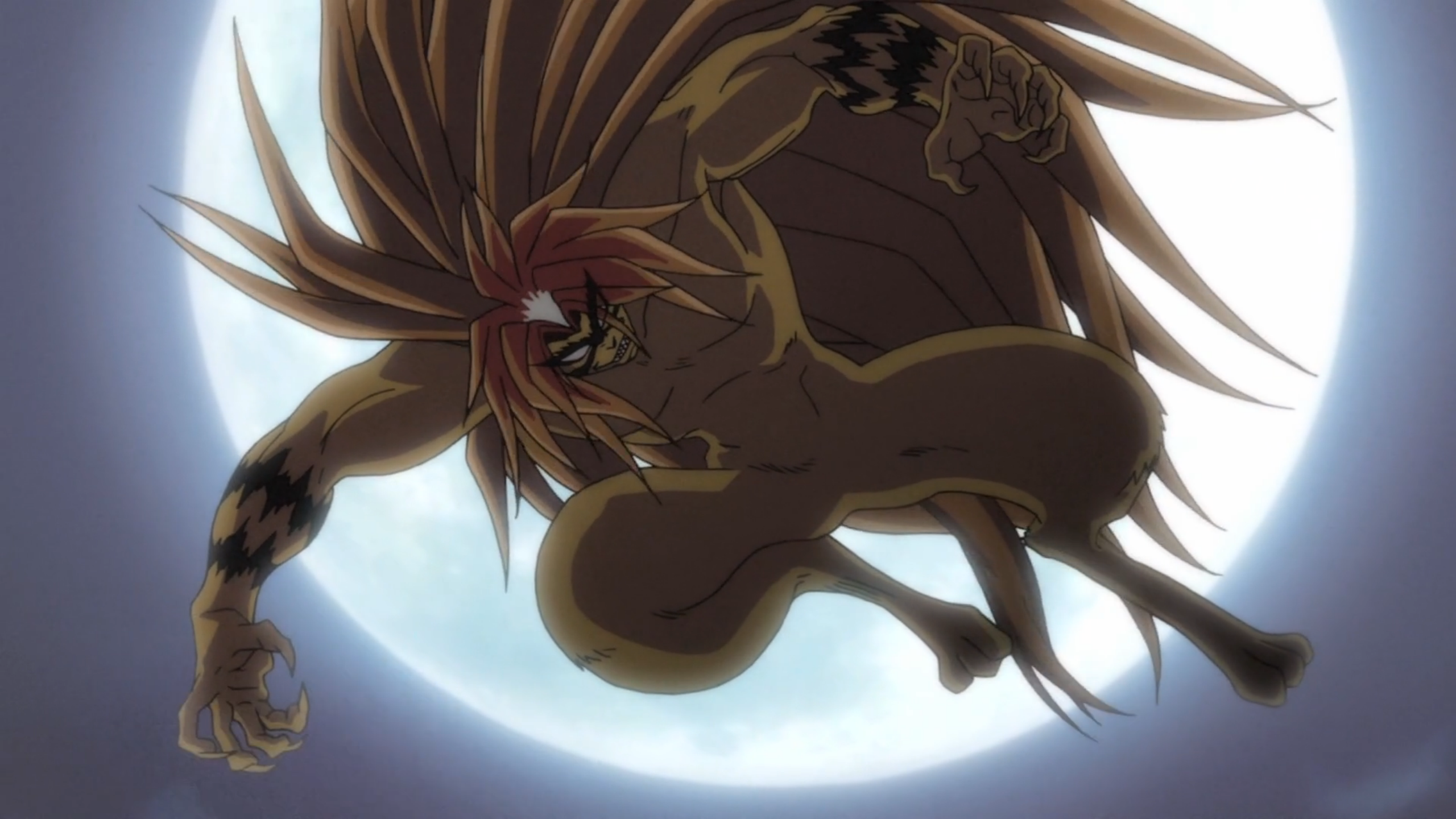 Side stories involving the Chinese exorcist Hyou (Daisuke Namikawa/David Wald) and shakuja expert Nagare (Yoshimasa Hosoya/Ian Sinclair) at first stand on their own as great stepping stones towards Ushio and Tora's growth. However you soon later learn that these seemingly one-off characters are part of the entirety of the main story being told. Although it becomes apparent that they're part of the big picture, their introductions as a whole hint at what's to come down the line. When they arrive for the bigger fights, their importance naturally comes through via their actions alongside Ushio and Tora.

Perhaps the one story that shines the most is the origin of the Beast Spear. With the aid of a yokai ally, Ushio and Tora are sent back in time to meet the blacksmith Giryō (Mamoru Miyano/John Gremillion) and his sister Jie Mei (Kana Hanazawa/Carli Mosier). What follows is a tale ripe with tragedy, soul sacrificing, and powerful emotion. It's a tale that becomes the backbone to Ushio & Tora as a whole, one that showcases the importance of why Hakumen no Mono must be defeated and the cost that victory entails. 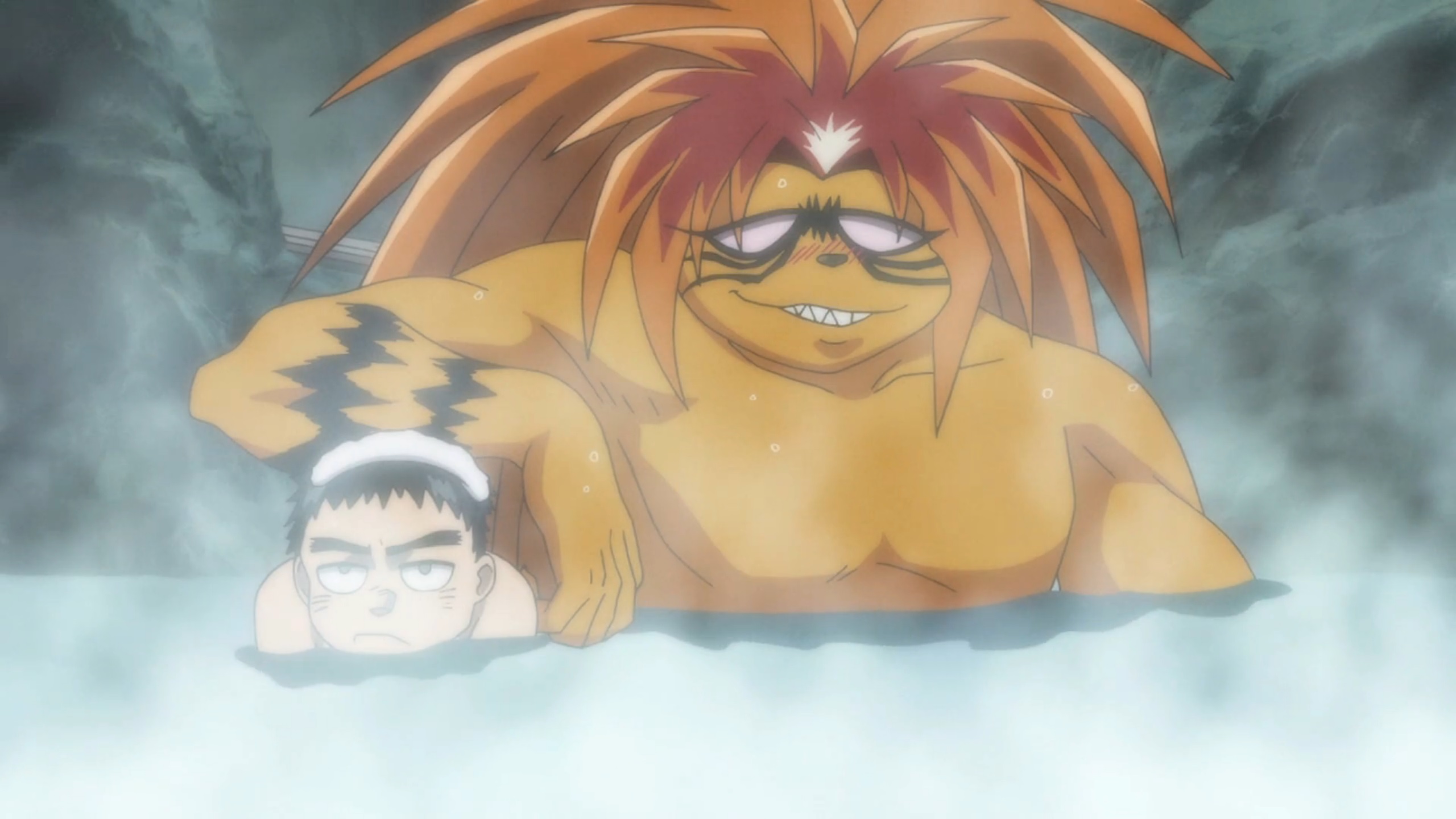 Fortunately the sadder elements of the series are outweighed by its funny bone. Watching as Tora tries to eat Ushio and his friends never gets old, with the giant monster regaining his heart slowly thanks to a new hunger for hamburgers fed by Mayuko. The goofy mentality of Tora slowly reveals itself as the beast marvels at modern technology like airplanes and elevators, acting almost like a country child seeing a big city for the very first time. It's moments like these that cut the tension in the air this show breathes, especially when the light of the world is about go dim.

When Ushio & Tora puts on its boxing gloves and begins to throw down, the real beast of the series is unleashed. Watching as Ushio handles the Beast Spear against monsters big and small is like a ballet of violence, with Tora acting as the perfect partner with sharp teeth and scoffing attitude. Its gore factor certainly earns its TV-MA rating, with the series never holding back its claws when it comes to stabbings, amputations, beheadings, and impalements. Needless to say, both MAPPA and VOLT were able to capture that late 80s/early 90s hardcore violence that anime made (in)famous during the manga's original run. 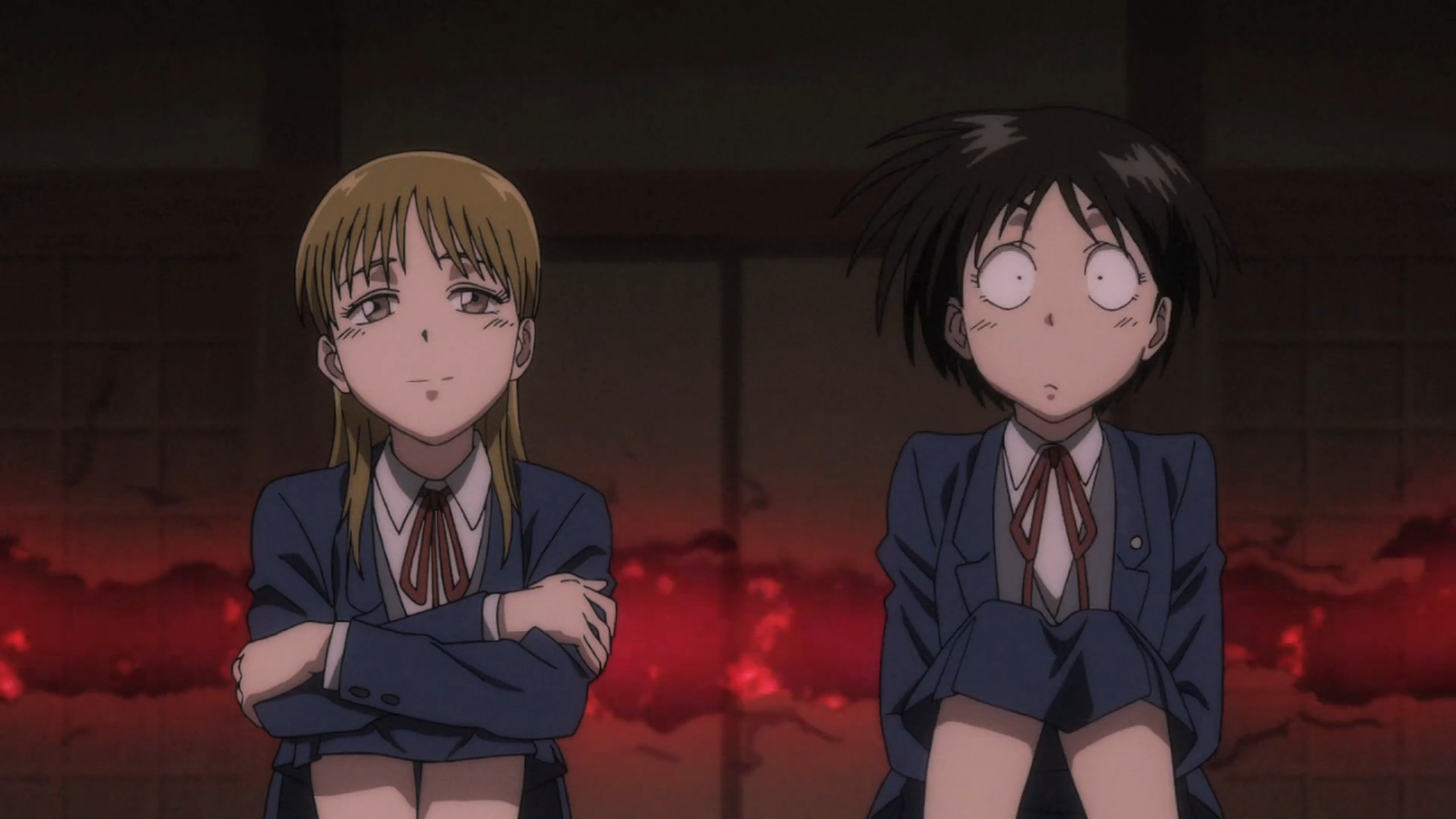 Both the Japanese and English dubs have their shining moments, with the latter certainly being worthy enough of a Toonami run of sorts. Reprising his role from the original OVAs, Weaver's Tora is like that of a classic pro wrestler: a lot of growl, a threatening snarl, and a big heart that's hidden deep within. Sumrall and Christian balance adorable and tomboyish attitudes with a strong will in their portrayals of Asako and Mayuko respectively. However while Matranga does capture the anger and sadness of Ushio, he always sounds mad throughout the show, even during the calmer and lighter moments.

The original Japanese dub does a far better job with a couple of the characters, especially with Hatanaka's Ushio. Here he expresses his emotions more properly throughout the series, be it anger, joy, sorrow, and full-on rage. As Tora, Koyama brings an attitude that feels akin to that of a death metal frontman colliding with "Macho Man" Randy Savage. While Swasey does a good job with his portrayal of the ultimate baddie Hakumen no Mono, no one can light a candle to that of voice-acting legend Hayashibara. In a performance unlike anything I've heard from her, she legit breathes hatred into every syllable she screeches on-screen. 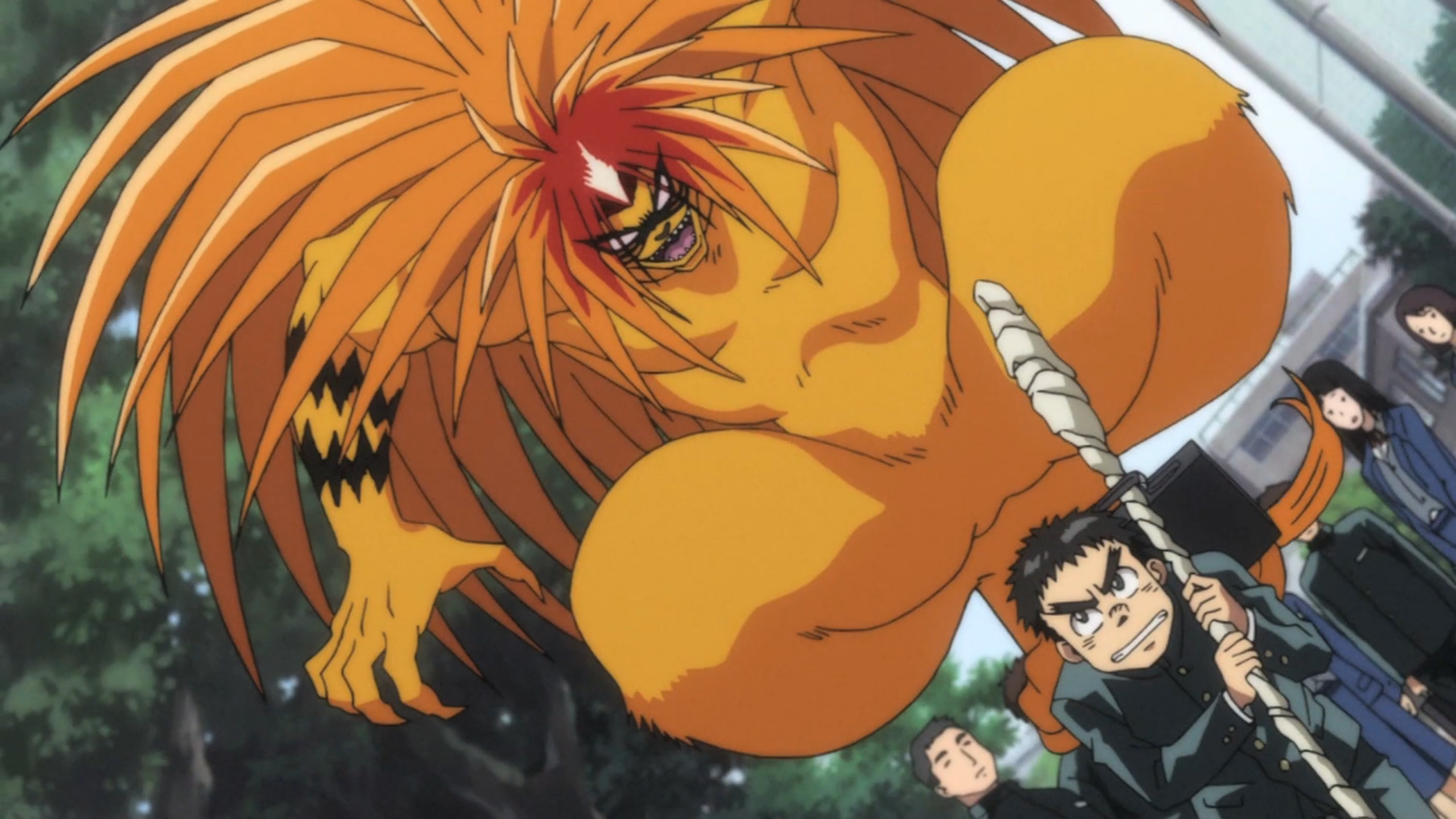 Pumping through the speakers throughout its run, the score from Eishi Segawa knows how to create an extra heart-pounding essence during a long battle. A few songs act as the opening and closing themes of Ushio & Tora, with the first OP "Mazeru na Kiken" by Kinniku Shōjo Tai shining the most thanks to its hilarious lyrics dealing with impending doom wrapped in metal riffs and screamo vocals. It also helps that it's catchy as hell, with the odds of you humming its melody long after hearing it being very good.

Its Blu-Ray release from Sentai Filmworks is a bit barebones, to say the least. Special features are the usual, with credit-less opening and closing animations, original Japanese promo videos, and trailers from other Sentai releases. Those wanting something extra will find it in the anime's premium box set, which does come with quite a lot of goodies that include a collector's booklet, poster, Beast Spear replica, and an adorably goofy Tora keychain.

Ushio & Tora is an anime that's not afraid to be both badass and heartfelt. In many ways, both attitudes go hand-in-hand with the series, with our title characters bonding over great strides via a happy roar and a punch to the face. Never afraid to bear its fangs and soul, this adaptation of Fujita's original manga doesn't hold back with what it wants to be: a testosterone-filled thrill ride filled with spirits both strong and consoling. If you've yet to sharpen your claws to Ushio & Tora, now's the time to do so!

Background Noise: Saturnalia by The Gutter Twins - In 2008 the duo of Mark Lanegan (Screaming Trees) and Greg Dulli (Afghan Whigs) got together to craft the darkest, most brooding album of the year. Bringing both the end of the world and the start of a new one within its twelve tracks, the floodgates open violently in "The Stations" and "All Misery/Flowers," before letting the fires roar high in "Idle Hands" and "Bête Noire." When the calm comes in the closer "Front Street," all that was once wicked vanishes without a trace. An album worthy of any Armageddon, The Gutter Twins' Saturnalia is that one record you'll need when Hakumen no Mono awakens from its vicious slumber.

ANIME REBUTTAL | Why I Was Wrong A...