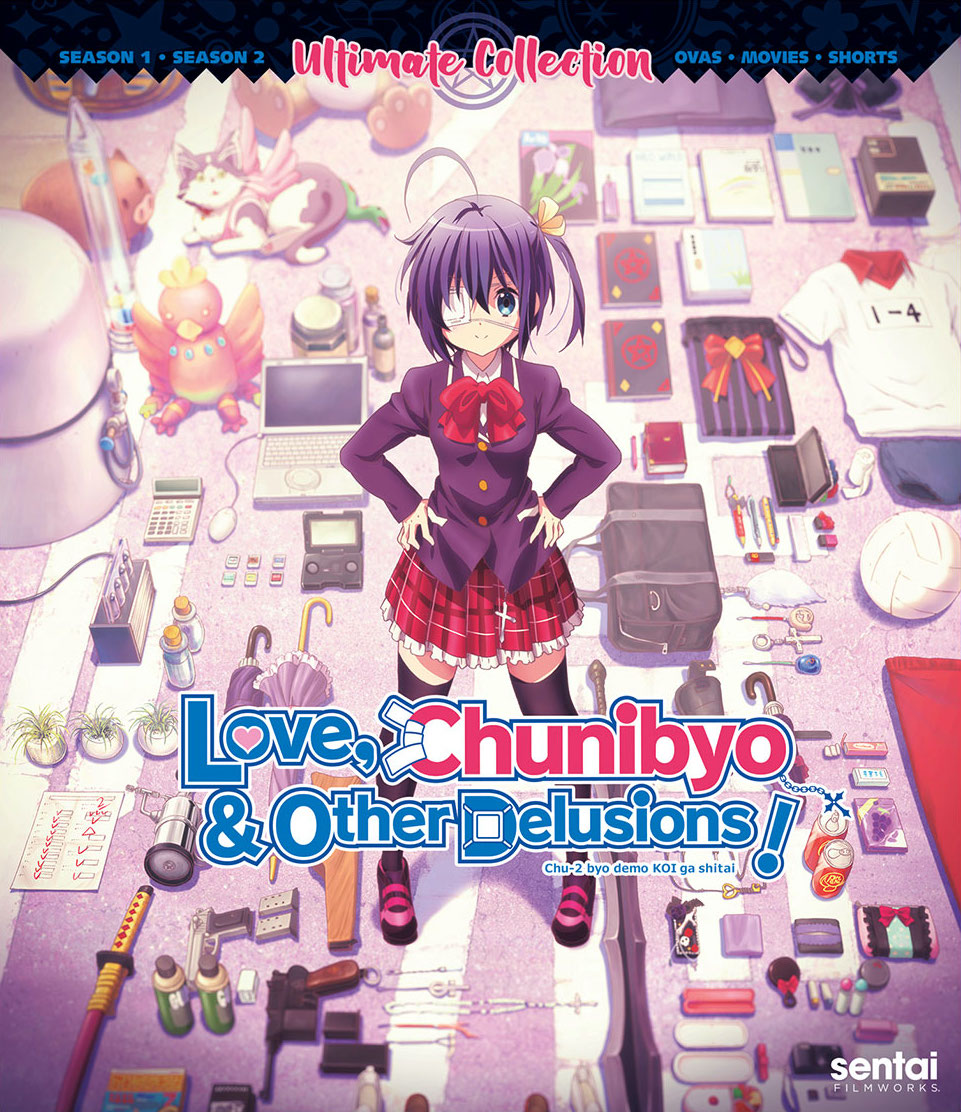 WARNING: THIS REVIEW MAY CONTAIN SPOILERS

It can be hard to know when to cling to childlike fantasies and to start realizing it’s time to mature. Some folks like to take their fantasies and use them as a defense mechanism, sometimes to deal with grave changes in life like death or a change in residency. Hence why anime fans have come to find themselves seeing many characters with a trait known as “chunibyo,” a mental personality that occurs when someone in high school couldn’t break away from their younger self. Seemingly, it causes them to bring their make-believe world into reality, with them playing pretend in a serious light that makes their perception of the real world foggy.

In anime, these characters can be seen in such series as Outbust Dreamer Boys, And You Thought There is Never a Girl Online?, and even in some fashion in fantasy settings like KonoSuba and When Supernatural Battles Become Commonplace. However, out of all the shows that have come out in the last ten years, none have tackled the subject with both lightheartedness and seriousness like Kyoto Animation’s Love, Chunibyo and Other Delusions. Now available in an “Ultimate Collection” from Sentai Filmworks, the series demonstrates the importance of maturing while keeping true to one’s comfortable self. How that affects the characters of this story aids in crafting a truly unique and fuzzy-feeling rom-com. 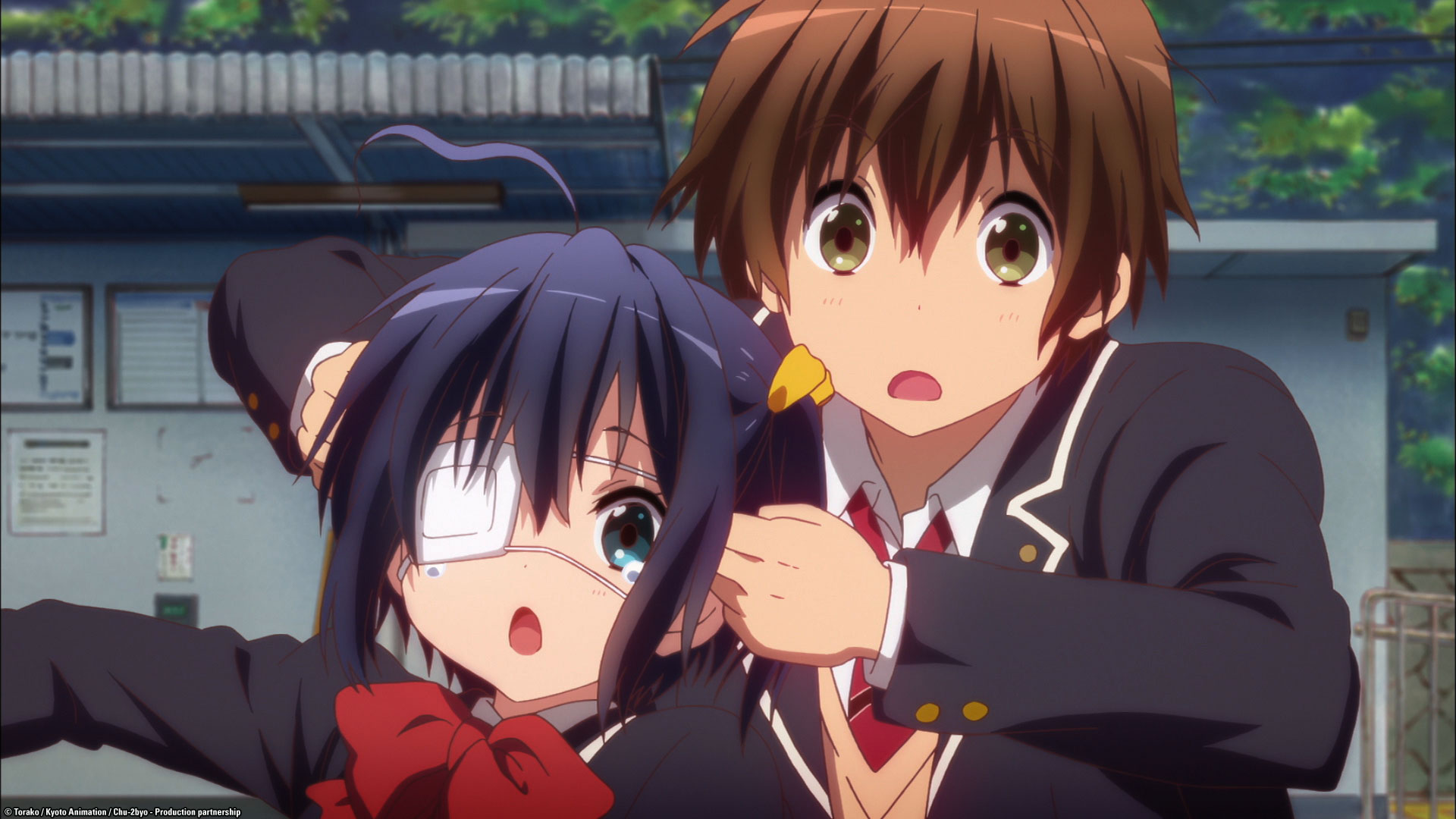 Based on the light novel series by Torako, Love, Chunibyo & Other Delusions follows high schooler Yuta (Jun Fukuyama/Leraldo Anzaldua), who is starting his new chapter by saying farewell to his chunibyo ways. Unfortunately, classmate and neighbor Rikka Takanashi (Maya Uchida/Margaret McDonald) enters his world with Wicked Eye in tow. Trying to keep his past life secret turns out to be harder for Yuta than he thought, as other current and former chunibyo enter his life in the form of the twin-tailed Dekomori (Sumire Uesaka/Brittney Karbowski) and the class sweetheart Nibutani (Chinatsu Akasaki/Maggie Flecknoe). With the aid of Nap Club Founder Kumin (Azumi Asakura/Emily Neves), the gang form a club to let their overpowered imaginations run wild, in the guise of the “Far-East Magical Napping Society - Summer Thereof”. (I have no idea why there’s a “summer thereof” at the end; I’m just going with the flow.)

The two-seasoned anime sets its narrative up in a way that places a big focus on Rikka’s personality. While Yuta can be considered the main character in the show, it is Takanashi that acts as the glue that keeps everyone together. Season One is an understanding of how and why Rikka became a chunibyo, with Yuta’s Dark Flame Master persona playing heavily on her influence. It’s not via some “woke” moment that Rikka descends this path in life (much like the pro wrestler Matt Hardy’s character), but rather a traumatic and tragic event that pushes her into this pretend world of hers. In a way, it’s understandable how she copes with the kind of loss that befalls her at a young age, and Love, Chunibyo & Other Delusions never paints her as a character to be made fun of or pitied. 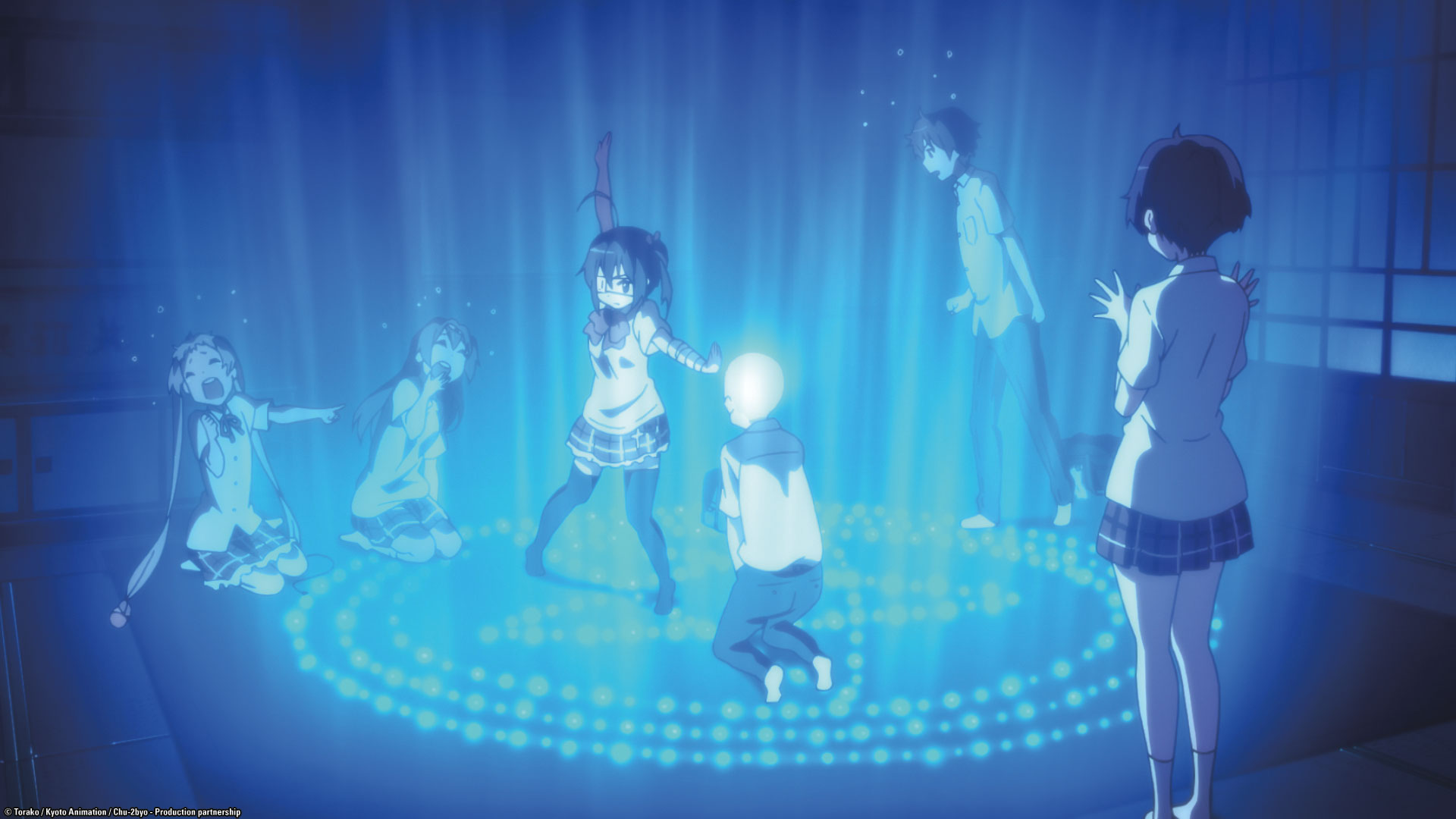 Rather, it’s Yuta that becomes the butt of the series’s joke throughout its run. No matter how hard he tries to hide his chunibyo past, Rikka is always there to pull it right back out. In the show’s first season, he attempts to bring Rikka back into the fold of reality. However, within its second season, it’s Rikka that’s bringing Yuta back into the fantasy world, somewhat reawakening the boy’s true personality. By some weird-yet-well-written force, Yuta begins to realize the importance of keeping true to one’s self, even if that true self can lead him towards embarrassment.

Of course, Love, Chunibyo & Other Delusions knows how to have fun with their characters, even if it can be at the expense of them. This is very apparent with Nibutani, whose chunibyo past self Morisummer is worshipped by Dekomori. Of course, Dekomori never believes that Nibutani is Morisummer, leaving the two to bicker and fight with great hilarity in tow. Meanwhile, the best friend character Makoto (Sōichirō Hoshi/Greg Ayers) is cursed to being the forgettable character, even as he attempts to confess his feelings for sleepy-headed Kumin. But it’s the relationship between Yuta and Rikka that keeps the comedy at its freshest. 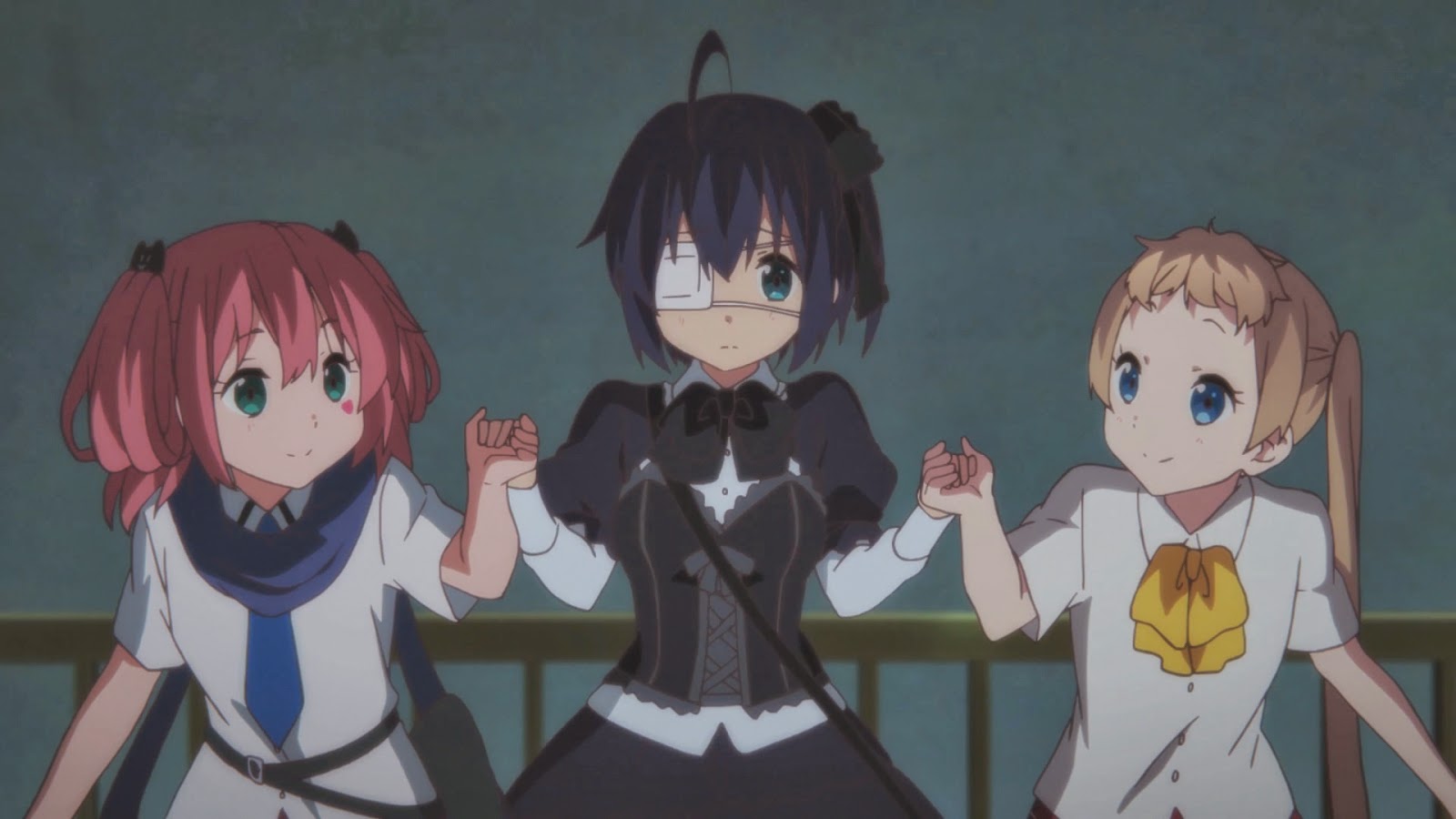 The silliness that these two demonstrate is shown through their shyness regarding their relationship. It’s one thing to take things slow; it’s another to ride the back of a slug and not even kiss until the final moments of its theatrical finale. In a way, it’s a sort of adorable comedy that brings out two socially awkward people into each other’s bubble, Dark Flame Master and all. All it takes for them to sync is a little push (or, in Rikka’s case, a near-tumble off of a school roof).

What I appreciate about the relationship between Yuta and Rikka is their way of acting as one another’s backbone. Without Yuta, Rikka would never find the courage to deal with a family tragedy and start seeing the real world that’s right in front of her. On the other hand, Rikka helps Yuta realize that it’s okay to be yourself, even if it can be a little dorky. While his goals were at first to bring Rikka back to the folds of reality, it’s Yuta that finds that it can be fine to go back into a fantastical bubble, even if it’s just for a moment. 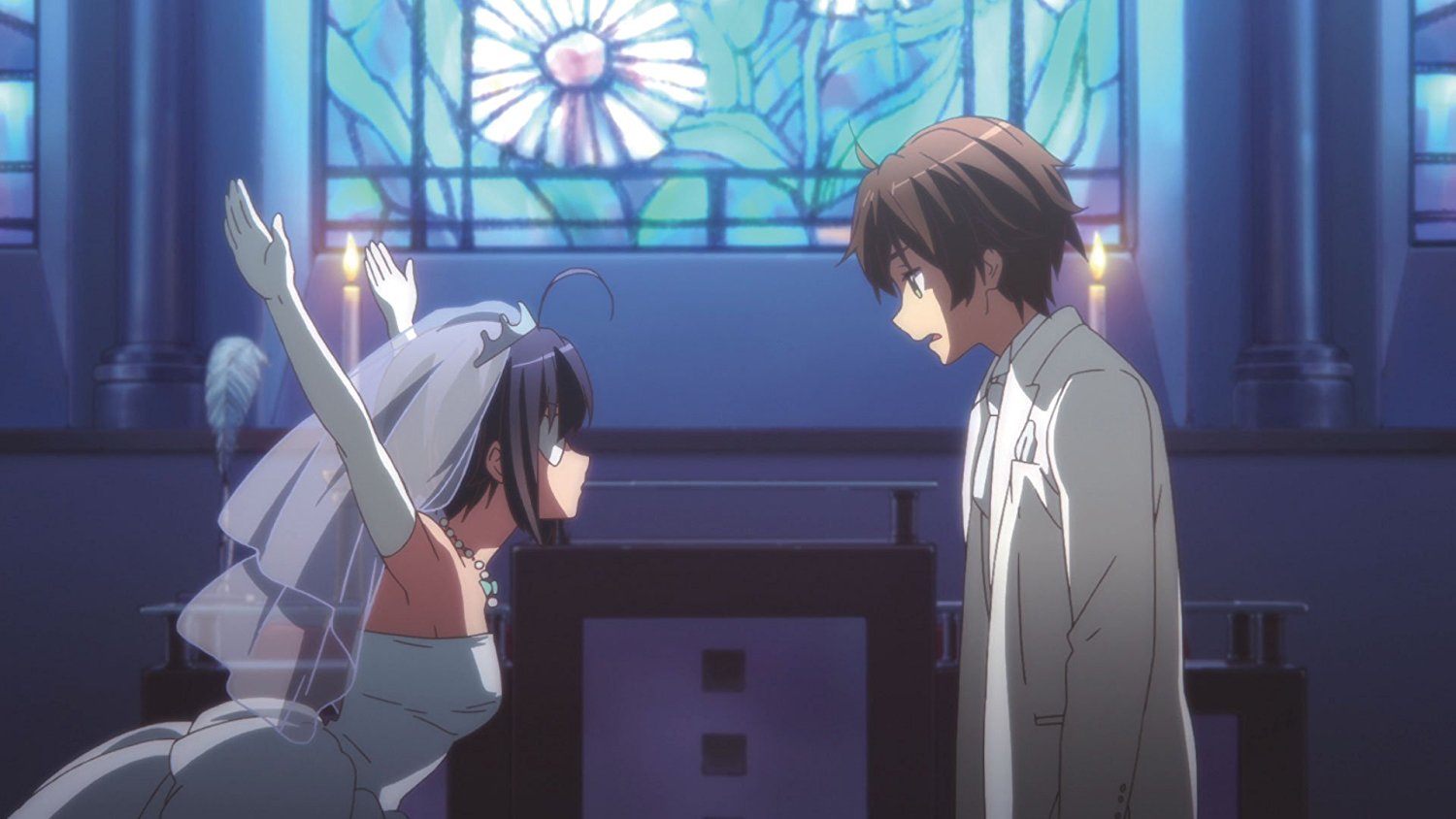 The anime series paces itself well with how Yuta and Rikka evolve throughout Love, Chunibyo & Other Delusions. While the romantic elements tend to dilly-dally like most rom-coms everywhere do, it places a strict importance of pushing these characters to be their best true selves at the forefront. It’s in the movie finale Take On Me when Yuta and Rikka realize the importance of each other in their lives, giving way to a hopeful and somewhat adorable future for the two of them.

Speaking of films, I’d be amiss to mention how much of a missed opportunity it was for the Rikka Version of the Season One recap movie. Although it’s bookmarked by some impressive comedy (not to mention the best action scene Kyoto Animation has ever done), the film goes the lazy route and shows a spliced up version of what viewers had already seen on the TV show. Had they done it in a way that showed how Rikka perceived the events happening around her, it could’ve made for a special kind of film. Alas, it was not to be. 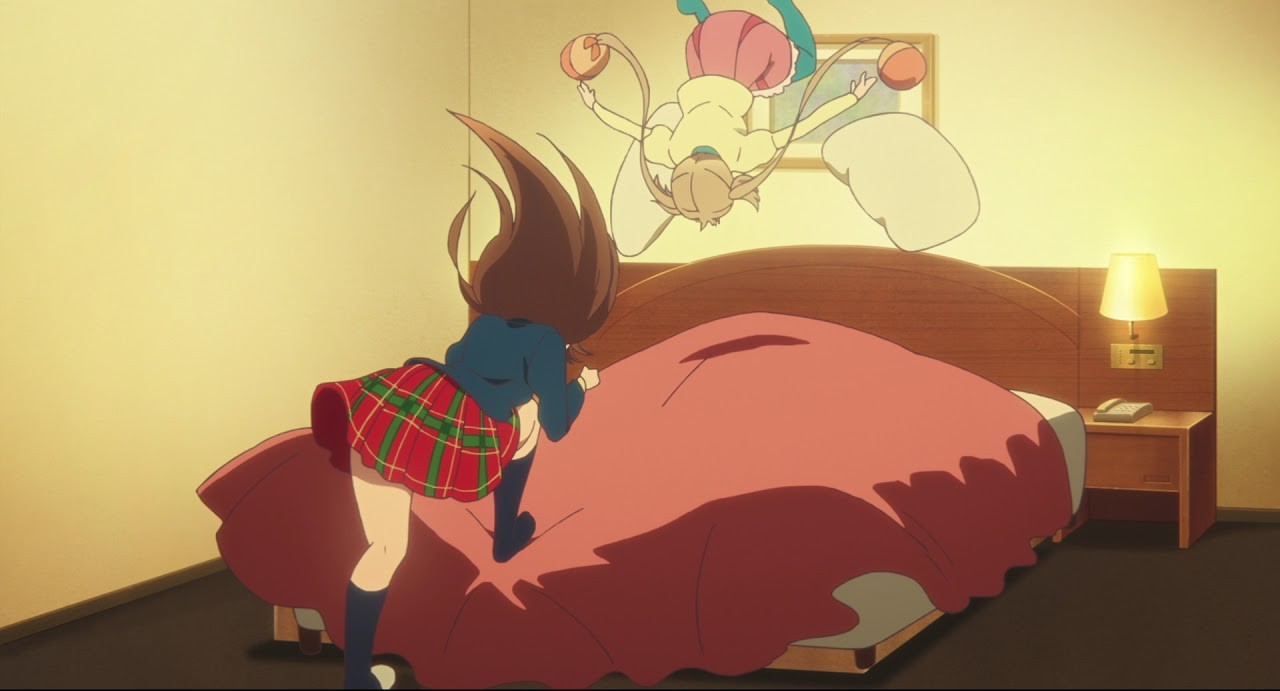 It’s with Love, Chunibyo & Other Delusions where Kyoto Animation had found its stride with crafting cute-looking characters within an impressive-looking world. Within a highly detailed world, the characters brim with personality and adorability. In the film Take On Me (and the new segments in Rikka Version), the attention to backgrounds and the characters are pushed to greater visuals. Although A Silent Voice still stands as the best-looking thing Kyoto Animation has done for the big screen, Take On Me is a very close second.

Whether you listen to it in either the original Japanese or English, both voice casts do an excellent job portraying their characters. However, it’s very interesting to hear how different the personalities of Rikka are depending on who you hear. Although both have a cute vibe to them, Uchida has this sort of quiet-yet-determined mentality when playing the chunibyo. In the English dub, McDonald boasts with a lot of confidence in her performance, thereby making the more coy moments of Rikka a bit more humorous in the long run. With that being said, it’s also hard not to choose Fukuyama over Anzaldua in the role of Yuta, who goes full-blown Zero mode when acting like the Dark Flame Master. 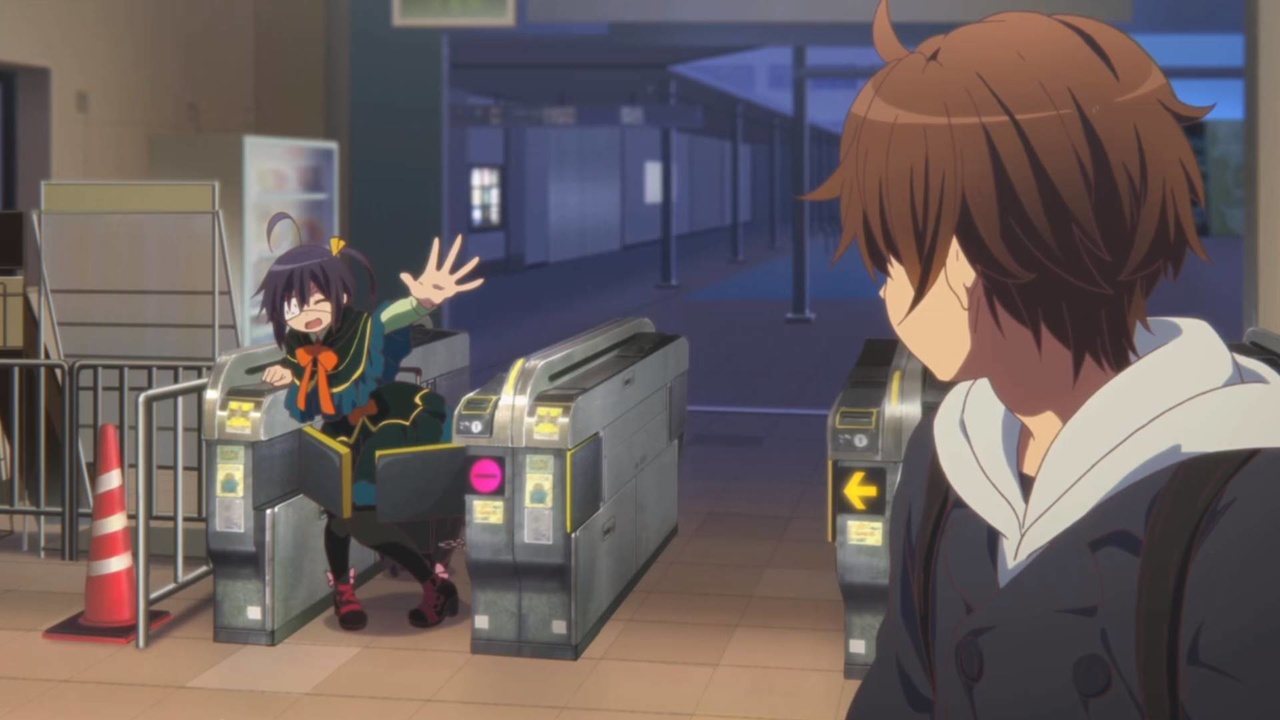 Composer Nijine (Baka & Test: Summon the Beasts) knows how to set the mood in Love, Chunibyo & Other Delusions via his soundtrack. When in fantasy mode, the score blasts through the speakers with epic melodies. The score calms itself with some wonderful piano compositions when reality kicks in, pushing the more sadder moments of the show with greater emphasis. ZAQ takes the reins of the openings with two excellent songs: Season One’s “Sparkling Daydream” and Season Two’s “Voice”. The female cast, in the guise of Black Raison d’être, struggle with the first end theme “INSIDE IDENTITY”, but showcase their true power in the vocal department in the second ending “Van!shment Th!s World”.

As for Blu-Ray Extras, there are a lot of bonus episodes to keep fans of the show happy. The Lite episodes of Season One and Ren Lite episodes of Season 2 are filled with humorous non-sequiturs, ranging from water balloon fights and volleyball training to the turmoils of having to eat out of a comfortable kotatsu. Sadly, nowhere in this Ultimate Collection are two other short series: The Depth of Field: Ai to Nikushimi Gekijō shorts from Season One (where Rikka and Dekomori fight in a mecha battle) and the Heated Table Series: Kotatsu shorts from Season Two (where the club goofs off in humorous ways). Although they have nothing to do with the actual story, these shorts do have many entertaining aspects to them that make their absence disappointing.

Although it’s not the absolute best thing that Kyoto Animation has made, Love, Chunibyo & Other Delusions is a definite highlight in the studio’s massive career. It’s heartfelt, filled with memorable characters, and tells a complete story that doesn’t get lost in too much fluff and filler. The story of Rikka and Yuta is one that showcases the power of both one’s imagination and spirit, with a plethora of feel-good moments that make it a highlight for anime in the 2010s. If — like me — you somehow missed this ship when it first set sail back in 2012, then you owe it to yourself to submit to the Dark Flame Master and watch Love, Chunibyo & Other Delusions!