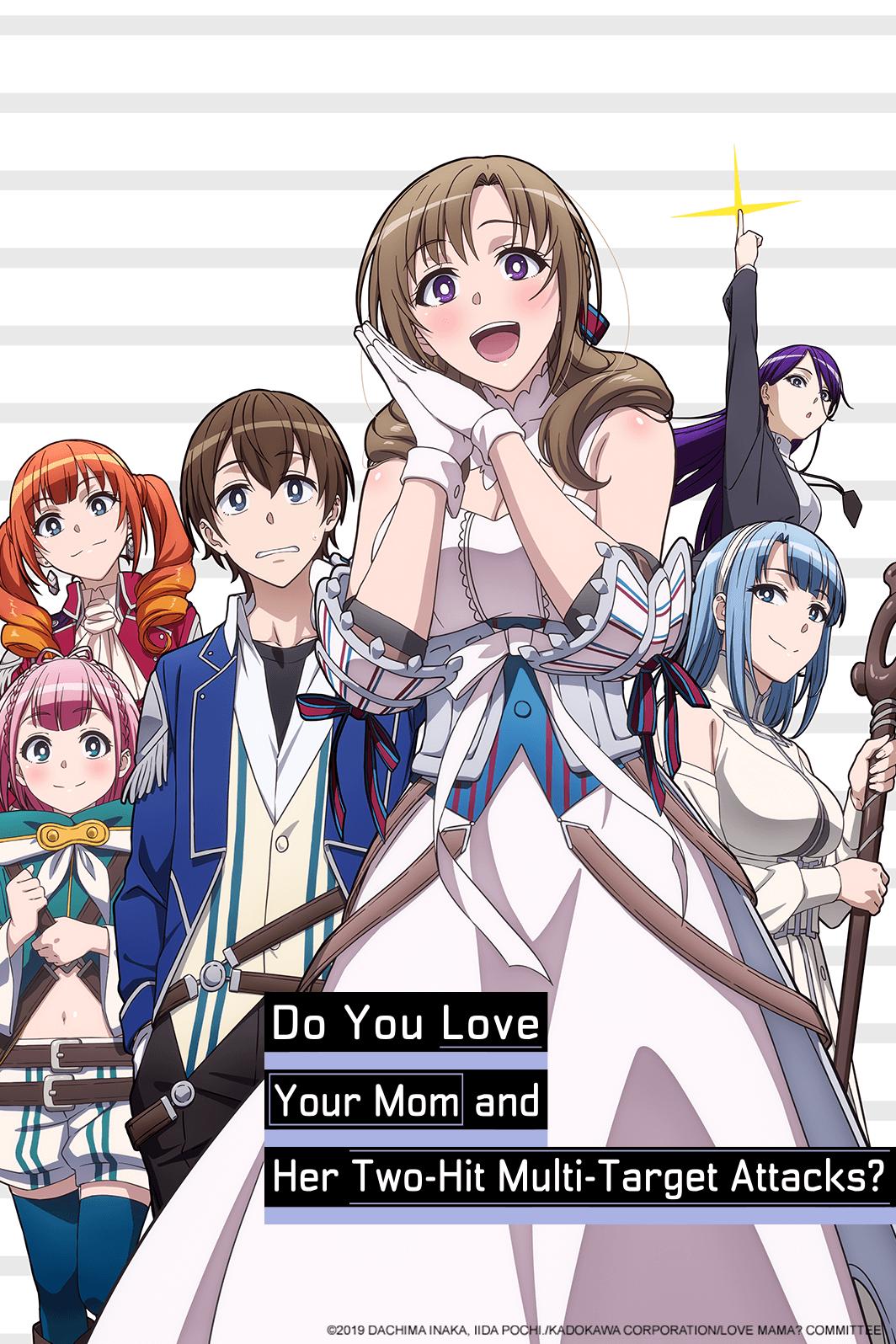 The isekai genre has almost done it all. From being reincarnated into slimes & even vending machines to having fantasy heroes transported to the normal world, just about any scenario has been brought to fruition in one form or another. So where can this form of storytelling go where no other has gone before? Well...how about if the protagonist is forced to bring a parent along for the ride?

Based on the light novel series Dachima Inaka, Do You Love Your Mom and Her Two-Hit Multi-Target Attacks? places its focus on teenager Masato Oosuki (Haruki Ishiya), who is given the opportunity to live in a video game world. Just one slight problem: after agreeing to it, he finds out that he has to traverse the world with his doting mother Mamako (Ai Kayano) in tow. Soon, the two discover that the game they’re in was created solely to heal any wounded or broken relationships between mother and child. As they build their team with craftswoman Porta (Sayaka Harada) and mages Wise (Sayumi Suzushiro) & Medhi (Lynn), Masato and Mamako set off to complete quests and rekindle their parent/kid relationship. 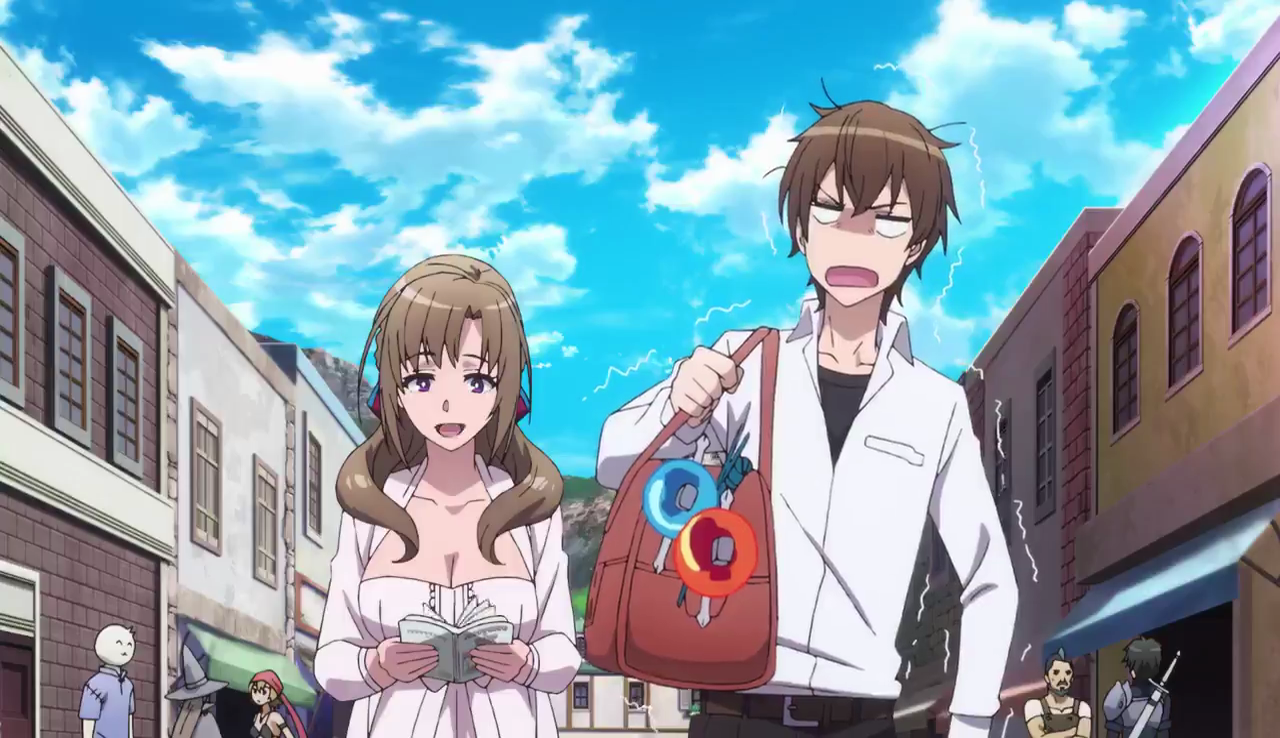 Where most isekai has the main male focus as the so-called strongest, this series takes a different route with making Mamako the surpreme warrior. After Masato is given his sword of choice, the mom decides to take the two remaining swords, solely because “the other sword won’t be lonely.” This results in her able to defeat a plethora of enemies with two swipes. Meanwhile, Masato struggles to fight on his own accord, with his weapon only able to hit targets that are airborne.

One thing that Do You Love Your Mom... does well is how it presents its world. As the game Masato and Mamako are in is still in pre-alpha mode, many background characters are still faceless and presented as white human-shaped husks. Although it could be just a ploy to make the animation a little easier to draw, it does a good job acting as humorous gag. Be it how a merchant on the street is carrying on its duties to even a student confessing their love to Mamako, the NPCs here are filled with more emotion internally than they are externally. 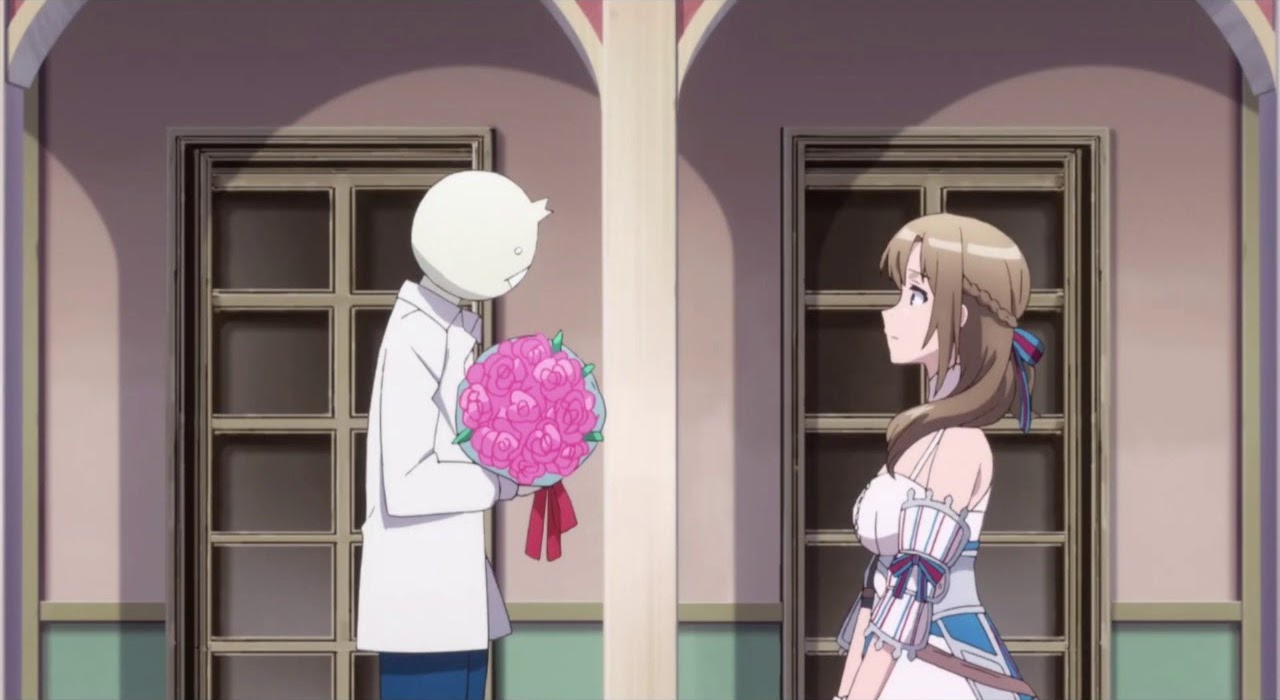 That last bit becomes a recurring gag throughout this anime. Masato often is found cringing and groaning over the fact that his mother is the center of attention, even if it brings his party good fortune in the long run. One can’t help but sympathize with the lad, as the sight of anyone’s mother being constantly placed on the pedestal as a sex symbol of sorts can be emotionally scarring. And yet, it’s these moments that bring the strongest dose of humor in this series.

There’s no such thing as subtlety in Do You Love Your Mom and Her Two-Hit Multi-Target Attacks?. From the pun-filled names of villages to even the fighting techniques, the series holds nothing back when it comes to making a mom joke. They are as eye-rolling as a dad joke, yes, but there’s a bit of sweetness that’s sprinkled atop these gags. Even when protecting her son & comrades from bandits, it’s Mamako’s motherly charms that just about always saves the day. (I mean, when’s the last time you’ve seen a hero defeating a pack of enemies by tucking them into bed & singing a lullaby?) 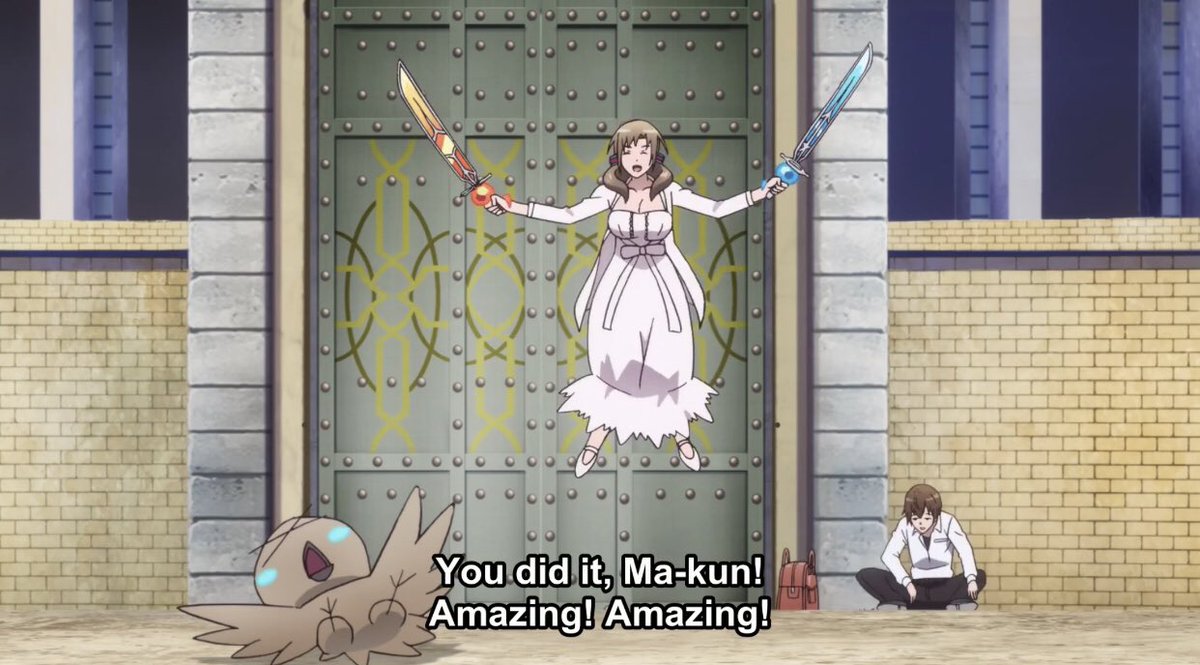 It’s Mamako’s can-do attitude that also helps to bring the right dose of sweetness to the show. Whether it’s calming another mom’s delusional ways to giving advice to her son and guild members, her positivity is a nice change of pace within the world of isekai series. Where KonoSuba takes a cynical approach to its world and characters, Do You Love Your Mom... takes a more caring eye to task in order to both better the characters within it. In laymen’s terms: this series is as heartfelt as it is funny.

Despite Mamako being in the spotlight for most of it, the rest of the cast isn’t useless in the slightest. Porta has a very similar dose of optimism as the anime’s doting mother, overcoming her short stature with her bursting energy and love for collecting. Even with her tsundere attitude, Wise’s dorkiness bleeds through her shell via her awful attack skills and easily embarrassed persona. When Medhi officially joins the crew, her cooler mannerisms and techniques overshadow those of Wise, making the latter almost the Aqua/Baldrick of the guild group. 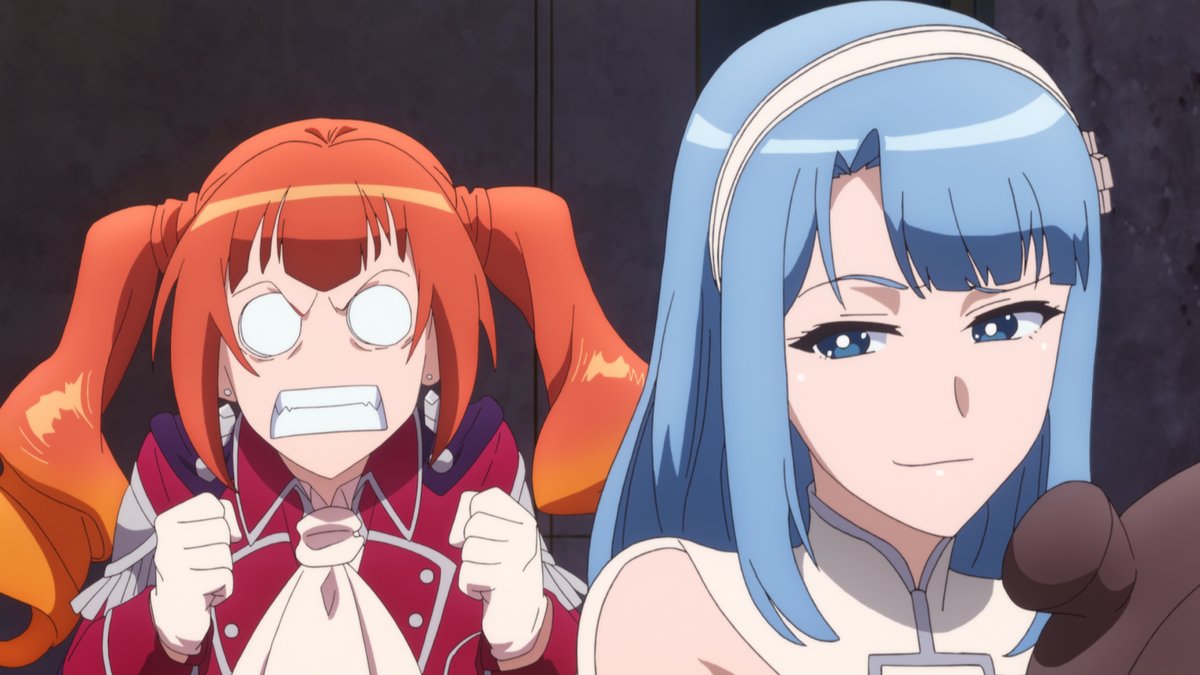 Of course, it’s hard to talk about Do You Love Your Mom and Her Two-Hit Multi-Target Attacks? without mentioning its fan-service. For the most part, it’s pretty laughable, with Masato forced to watch his mother try out skimpy powerful outfits or have her clothes eaten by slime monsters. It’s the hot springs meetings the guild have where one can’t help but roll their eyes at such a concept. On one hand, rarely anything perverted happens in the baths; on the other... it’s kind of weird? (I know, Japanese cultures are different from ours, so I can give this somewhat of a pass.)

Fortunately, there’s enough here to like that makes this anime more than just another isekai. Scriptwriter Deko Akao (Flying Witch, Anonymous Noise) has a good knack for bringing out the best in a show’s characters, handling Inaka’s original light novel with care & good detail. It’s apparent that this is a series made for people looking for something fun to enjoy, with a hint of heart to justify shoving a lesson or two along the journey. It also helps that the series has a great voice cast to bring this story to life. 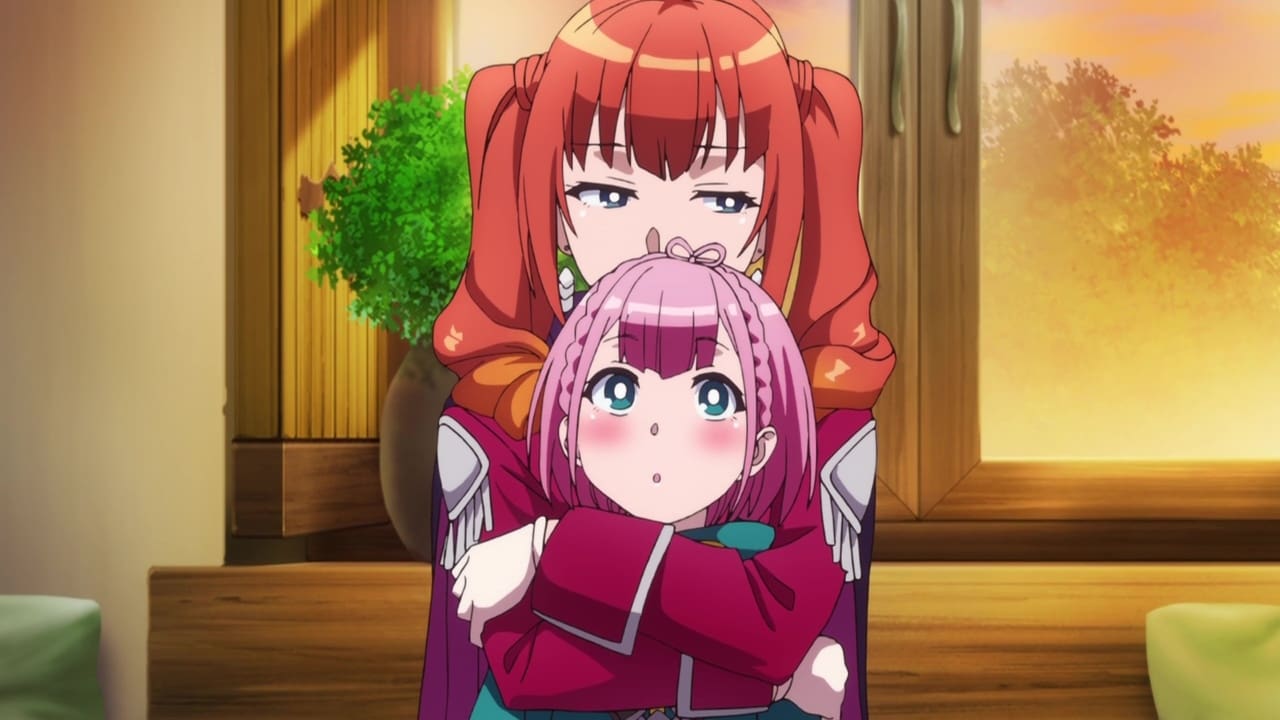 Perhaps one of the best voice actresses in Japan now, Kayano plays Mamako with the right amount of love and care. Although she may be 30 as of this review, Kayano demonstrates her vocal skills that make her sound like she’s been raising a child for at least over a decade. Ishiya’s Masato has a good dose of reluctance in his voice, but can deliver a hearty dose of understanding when the time calls for it. Although she may be overshadowed throughout the rest of the guild, Harada’s adorableness as Porta is smile-inducing, showcasing optimism even when her other teammates seem down on their luck.

Animation-wise, Do You Love Your Mom and Her Two-Hit Multi-Target Attacks? looks very good, with action scenes shining brightly via the work of J.C.Staff. With that being said, character facial expressions seem a little off in places. Where movement has some seamless animation (especially when Mamako takes center stage), how a character may emote can come off a bit too stiff. A surprise, considering director Yoshiaki Iwasaki did a magnificent job with visual emotion with last season’s We Never Learn adaptation. 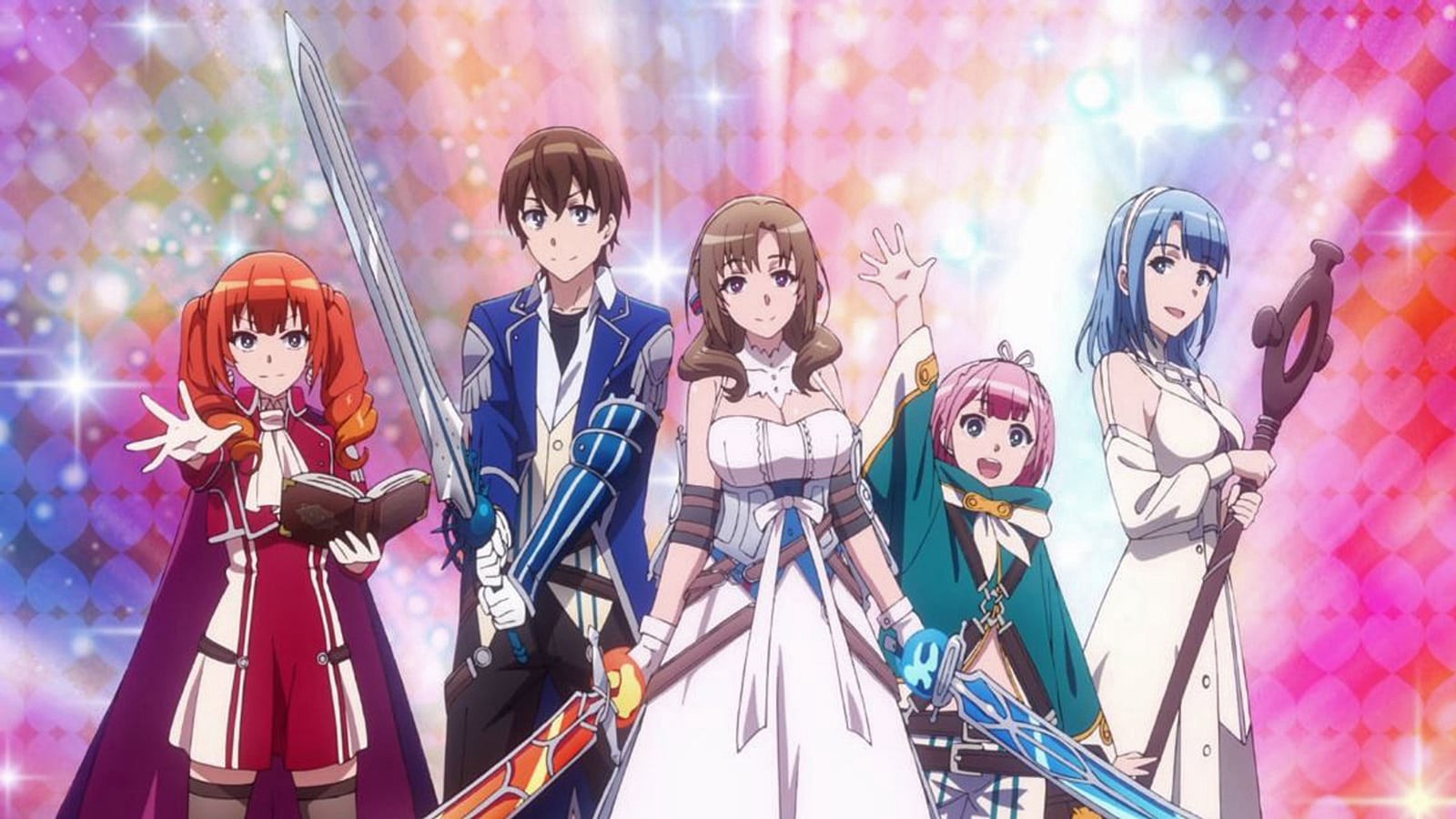 While the soundtrack fits the anime well, I can’t help but feel composer Keiji Inai half-assed the more orchestrated pieces. Some of them sound like they were scraps from his work on Is It Wrong to Try to Pick Up Girls in a Dungeon?, with wind instrument numbers sounding too much like what you’d hear during an adventure with Bell Cranel. Where the score does shine is its chiptune melodies, which are lovingly reminiscent of classic RPGs from the NES era. Opening theme “Iya yo Iya yo Mosuki no Uchi” by Spira Spica is a fun little pop ditty, but voice actress Kayano steals the musical spotlight with her retro-sounding end theme “Tsūjou Kōgeki ga Zentai Kōgeki de ni Kai Kōgeki Mama”.

Do You Love Your Mom and Her Two-Hit Multi-Target Attacks? is a true delight. While its mom jokes can be a little groan-inducing, it makes up for it with its tender moments and genuinely funny banter. While it may be embarrassing to go on an adventure with one’s parent in tow, Do You Love Your Mom... has proven that it can still deliver a grand good time for all.

Do You Love Your Mom and Her Two-Hit Multi-Target Attacks? can be viewed on Crunchyroll, VRV, and FunimationNOW. It has been licensed by Aniplex of America. Episodes 1-10 were observed for this review. Promotional consideration provided by Crunchyroll and VRV.