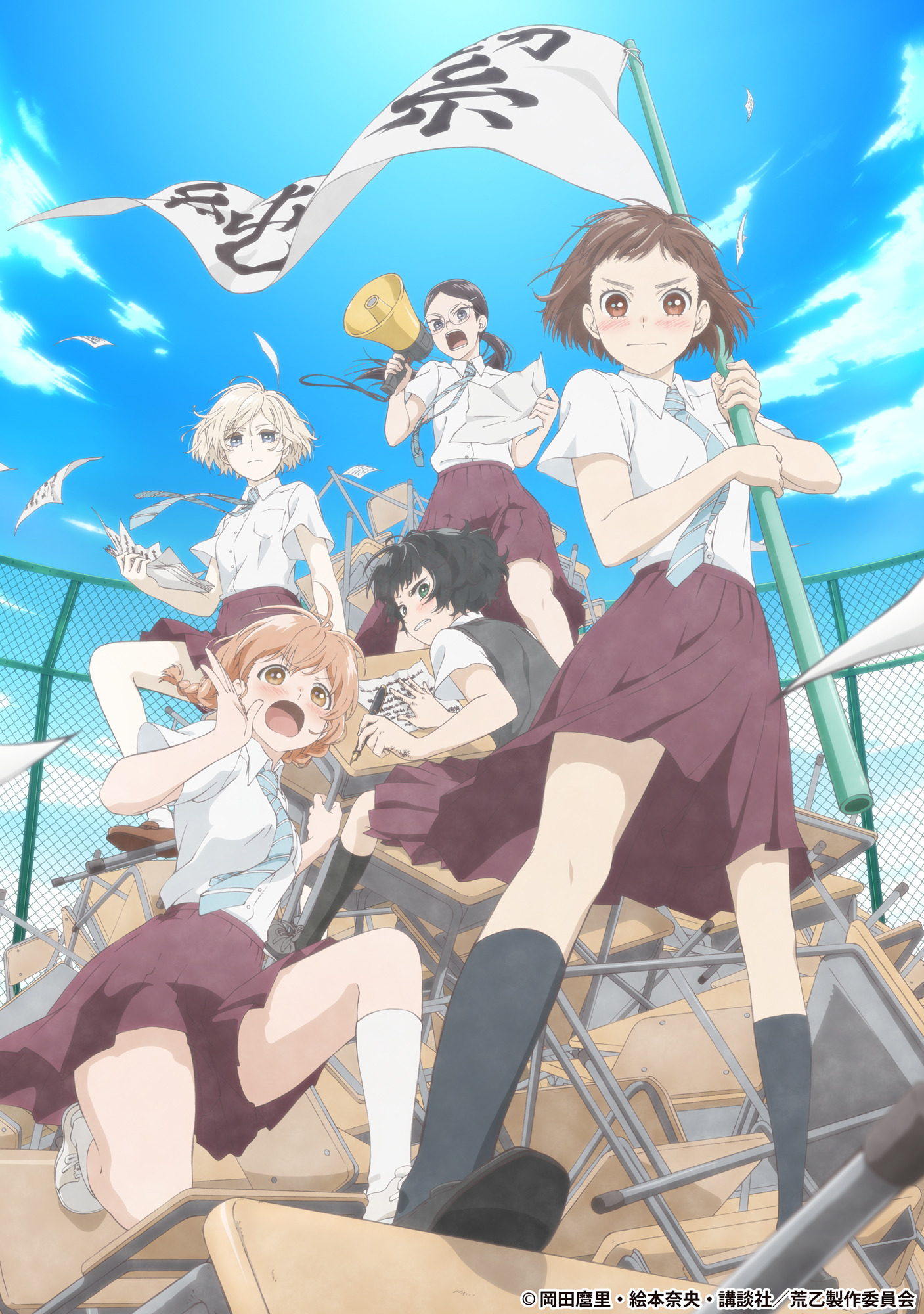 The matters of sex aren’t always showcased in a serious light in anime. Sometimes it often tries to go full-blown silly with its content, as evident in such series as My Girlfriend is Shobitch and Yamada’s First Time. But when it comes to demonstrating the real feelings of sex and puberty, it rarely ever gets the proper treatment. Leave it to Mari Okada (Maquia: When the Promised Flower Blooms) to not only present it in a realistic tone in O Maiden in Your Savage Season, but doing so while being both funny and down-to-earth at the same time.

Based on Okada’s manga series, O Maidens in Your Savage Season casts a light on a high school Literature Club aiming to find out more about sex in both classical works and in real-life. Kazusa (Hiyori Kono) begins to start having feelings for her childhood friend Izumi (Shimba Tsuchiya), only for her to see that her fellow club member Niina (Chika Anzai) might’ve stolen his heart first. Hitoha (Tomoyo Kurosawa) attempts to get some real-world experience for the sake of her future publications, whereas club president Rika (Sumire Uesaka) tries her best to hold down her romantic feelings for the sake of her strict sensibility. But as the days go on and the hearts flutter harder, it becomes apparent that they all can no longer hold their emotions back. 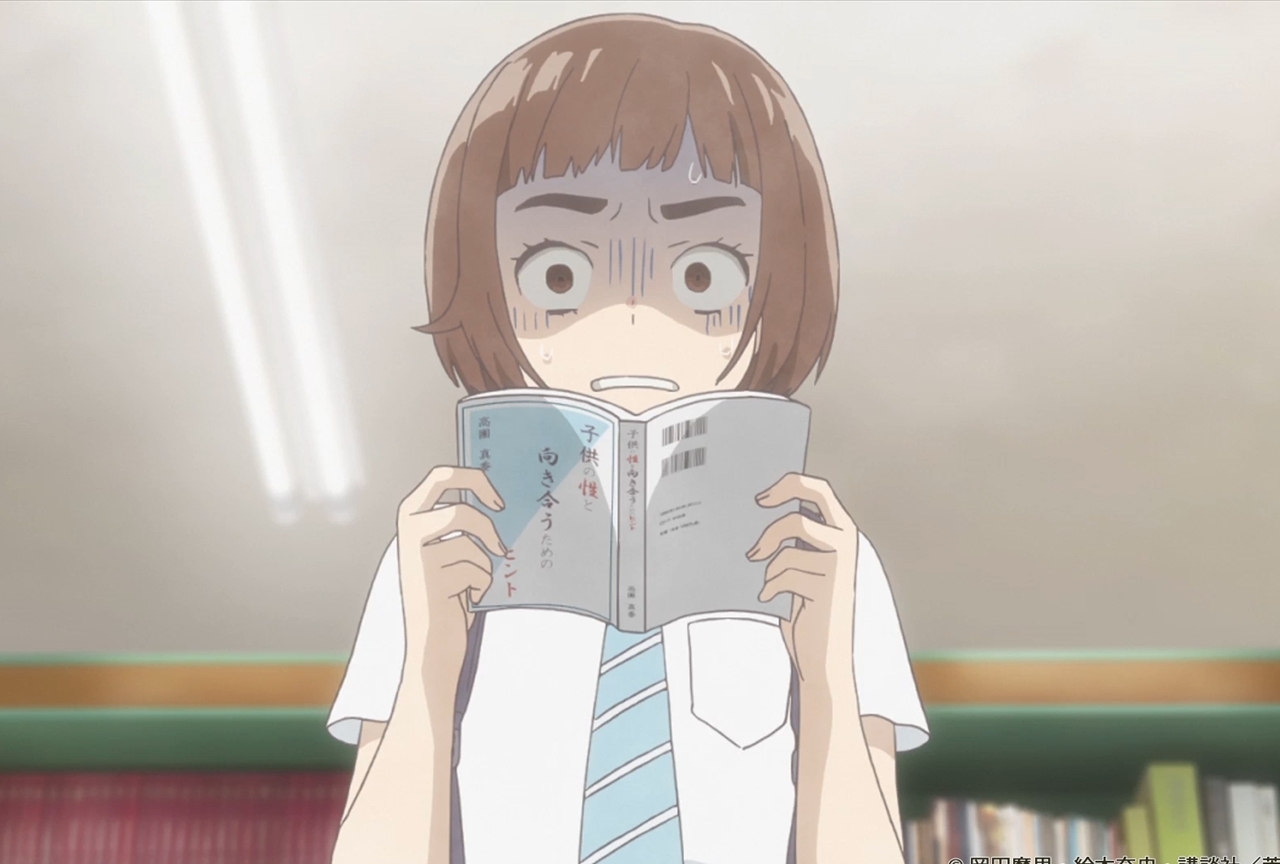 This roller coaster of emotions starts off when one club member answers “sex” when asked “What do you want to do before you die?” Before long, the Literature Club members are just about slapped in the face with all things love and sex. Kazusa winds up walking in on Izumi with pants down and hand in undies, whereas Izumi attempts to rile a former acting coach who can’t see past her former childlike nature. Meanwhile, Hitoha blackmails her teacher Yamagishi-san (Jun Fukuyama) after she catches him being her meetup for a mystery sex rendezvous, while Momoko (Momo Asakura) fights with her possible lesbian feelings for Niina. And like life, things get incredibly complicated when it comes to the wants of the heart.

There are things in O Maidens in Your Savage Season that may raise an eyebrow or two. The fact that Niina is at first trying to woo her former acting mentor, not to mention Hitoha’s attempts to get Yamagishi to notice her advances, will certainly raise many red flags for some viewers. Thankfully, Okada manages to present these aspects in very realistic ways. Izumi reacting to Niina’s back story with disgust is exactly how any normal person would feel, which is rarely seen in both anime and manga. (The less we can go down a Domestic Girlfriend path, the better!) Yes, you might still cringe at these scenes & scenarios, but they’re at least presented in a more believable light than a gross fantastical one. 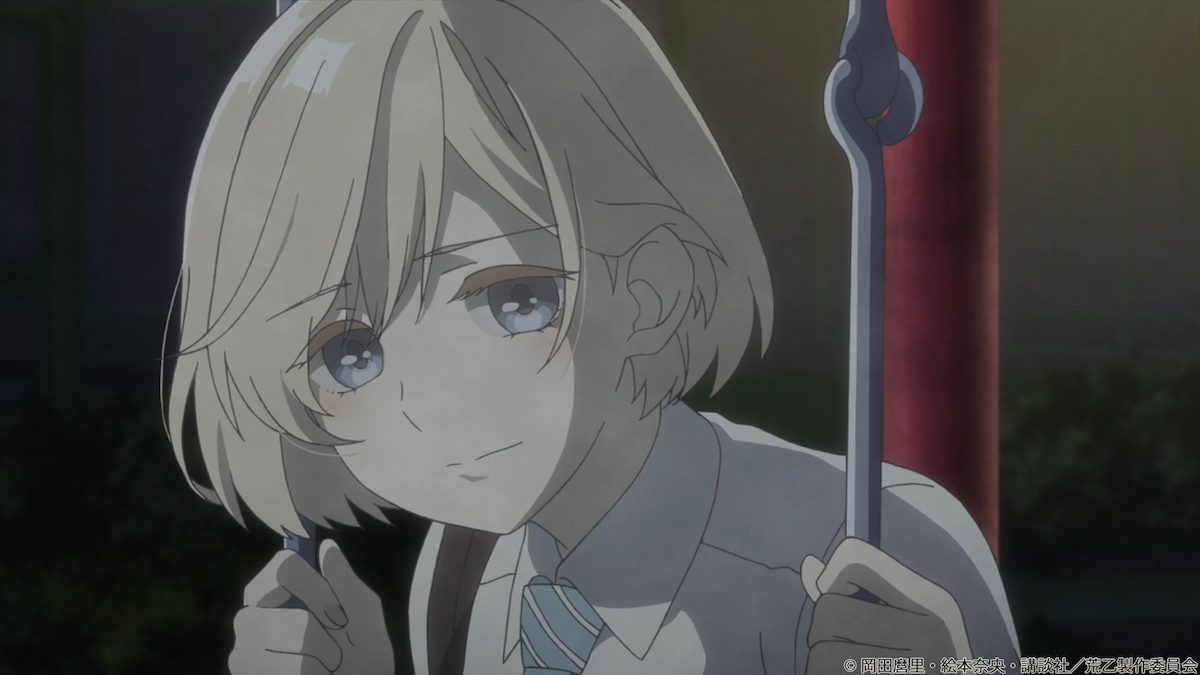 From another perspective, there’s the prudish Rika. She discovers one of her classmates may be thinking of her lewdly, which results in her demanding the boy to write a 40-page essay on why he wants to date her. Once in-hand, and after reading nearly 37 pages of the phrase “You’re cute!” written over and over again, her icy heart melts, as it’s the first time she’s been seen as beautiful by someone else. These heartfelt moments of O Maidens go perfectly in-hand with the humorous ones, as they often demonstrate the genuine parts of first love that some anime tend to forget about. 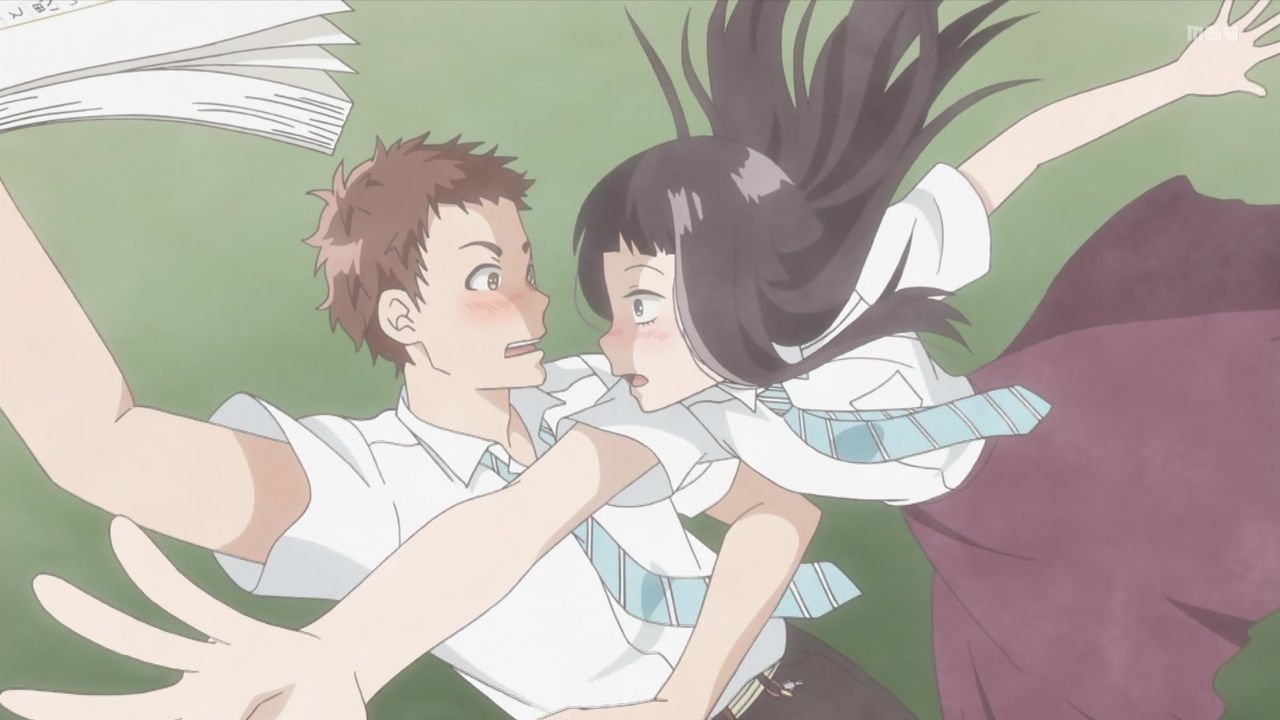 The best part thus far is a club field trip, which the girls take to gather research for a fictional urban legend they’re tasked to make for the school festival. Here, the series does a phenomenal job capturing both moments of growing up and the ability to still have fun like a young teenager should. One moment, the girls are pouring their hearts out over body issues and feelings of love that aren’t returned; in the next instance, they’re having a goofy pillow fight. This balance brings out the best in these characters, as they figure out what they aim to achieve in their hearts while still keeping grounded in the real world.

Much of these feelings are captured beautifully via the voice acting. Kono’s Kazusa brims with emotion as she tackles her feelings for Izumi, acting wonderfully as the show’s Everyman. Uesaka plays the prude well as Rika, as her feelings slowly go from the overtly conservative to the more free-flowing. Kurosawa delivers a very funny yet tragic portrayal of Hitoha, with her antics to get something for her writing skills seesawing back-and-forth between being humorous and desperate. When it comes to emoting, no one does it quite like Anzai in her role of Niina, one that teeters between cold & mysterious and brimming with explosive life! 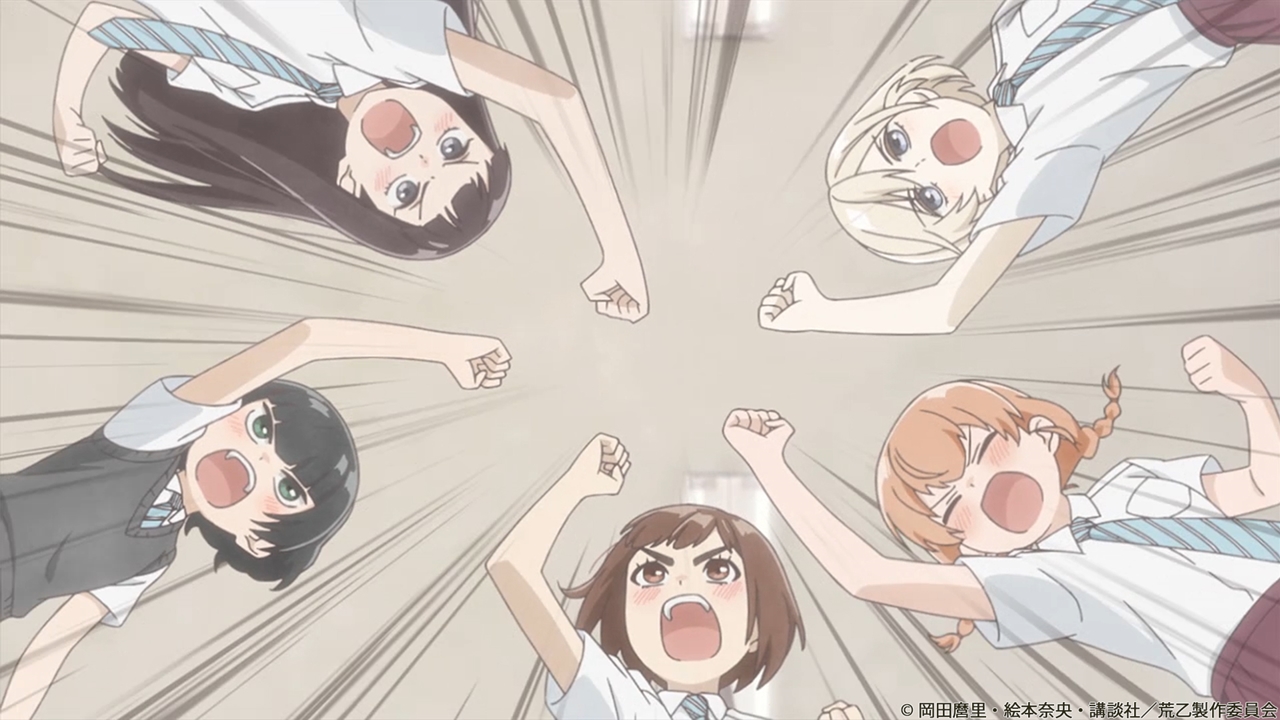 Animation studio Lay-duce (Release the Spyce) captures the emotion and setting of O Maidens in Your Savage Season beautifully, even with its somewhat melancholic tone. The way these characters react to their situations, as well as how their spirits are presented, are drawn in a way that feels a lot more straightforward rather than bright and cartoony. Even without the author helming her own, directors Masahiro Ando (Snow White with the Red Hair) and Takurō Tsukada (Our love has always been 10 centimeters apart) bring Okada’s manga to life at the same level of beauty as her own personal style.

Moe Hyūga (Steins;Gate 0) composes a musical score that fits strongly with the emotional punches this anime throws. With the aid of HoneyWorks, J-POP singer CHiCO crafts a heartfelt anthem in the form of opening theme “Otome Domo yo.” The lyrics brim with heavy truths alongside a positive reinforcement to try your best to claim what your heart wants. Asakura takes the reins of the end theme “Yume Cinderella,” a lovely pop melody that delivers a good dose of warm fuzzies.

I did not expect much from O Maidens in Your Savage Season, but it’s easily become one of the best anime of the summer. With its blunt humor, true-to-life scenarios, and heartfelt performances, Okada’s work delivers a coming-of-age tale that feels more genuine than most series out there. If you can keep at bay during some of the more uncomfortable elements (be it because it reminds you of your past selves or due to its troubling nature), then you’ll have no trouble enjoying what O Maidens in Your Savage Season has to offer. If the rest of the series keeps staying at this level of quality, it could very well become a true highlight for anime in 2019.

O Maidens in Your Savage Season can be viewed on HIDIVE & VRV. It has been licensed by Sentai Filmworks. Episodes 1-8 were observed for this review. Promotional consideration provided by HIDIVE & VRV.