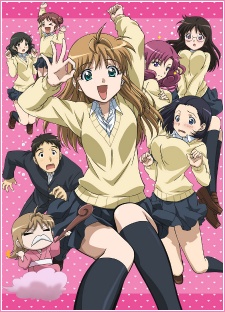 Yamada is your average high school student. She's pretty, popular and strong-willed. Like every high school girl she has but one dream: to obtain a hundred sexual partners. Wait...what? That can't be right!

Yes, indeed, this is the one goal Yamada has in the anime sex comedy B Gata H Kei (in English that's Type: B; Style: H). You see Yamada seems like the average cute high school girl, but at home she's as dirty-minded as Jim in the first couple American Pie movies. She highlights dirty words in the dictionary, collects erotic magazines and has the most strangest of fantasies involving other guys (and, on occasion, other girls). She also has a Sex Deity that follows her in her imagination, as well as giving some color commentary of the goings-on of each episode.

Fortunately this goal of sleeping with a hundred men doesn't last too long for Yamada, for it appears she has found her true soul-mate: Kosuda, a fellow classmate with a high interest in photography. (No, clean scenic photography, not the Suicide Girls type of stuff.) At first she just wants to sleep with him, but as time progresses she starts to gain actual feelings for the guy. (That and she realizes she can't get to home plate without running the actual bases first. Such a silly perv.) Will she be able to win the heart of Kosuda the right way, or will she revert back to her hentai tactics?

I will be honest: when I first heard about this show I thought it was going to be nothing but crappy fan-service with no well-deeming plotline nor likable characters. In fact before I even started watching the first episode I was ready to tear into it. But then something happened: the series wound up being not just entertaining, but the character of Yamada became somewhat sympathetic. Yes, I did mention that she has a lot of American Pie-like characteristics, but the more she tries to succeed in trying to get the deed done the more, well, human she turns out to be. Granted her maturity level doesn't rise, but that would've kinda made the series a bit too much of a stereotypical romantic comedy. (There is some fan-service in every episode, but I feel like in this case it enhances some of the jokes.)

When it comes to actual episode plotlines there are some good areas, and then there are roads that have been treaded on too much already. I enjoyed the Dark Room episode, and while school festival stories have been done to death this one had a cute-enough ending to be deemed entertaining. Still, can we stop with the Goddamn Valentine's Day Chocolate plotlines?! I can think of well-over 200 different anime series that have done this, and only a handful of them managed to get it done properly. And seriously, can you not air Christmas-related episodes in the middle of April?! Maybe it's because it's a different culture, but around here we air our Christmas stuff in December! (The episode did wind up being funny, though, and the "love park" scenario was ferociously bad in a good way.)

From watching the first half of the series I can already expect how the show will end, but I will be continuing to watch this anime and seeing whether or not I'm right. B Gata H Kei is very perverted, but it's got its heart in the right place (though you really can't say the same for its mind). If you're a fan of the likes of American Pie, Animal House and The Last American Virgin then you might enjoy this anime wholeheartedly like I did. If not, then I suggest looking elsewhere to find your anime needs.

Which Bastard is the "Deadlie...