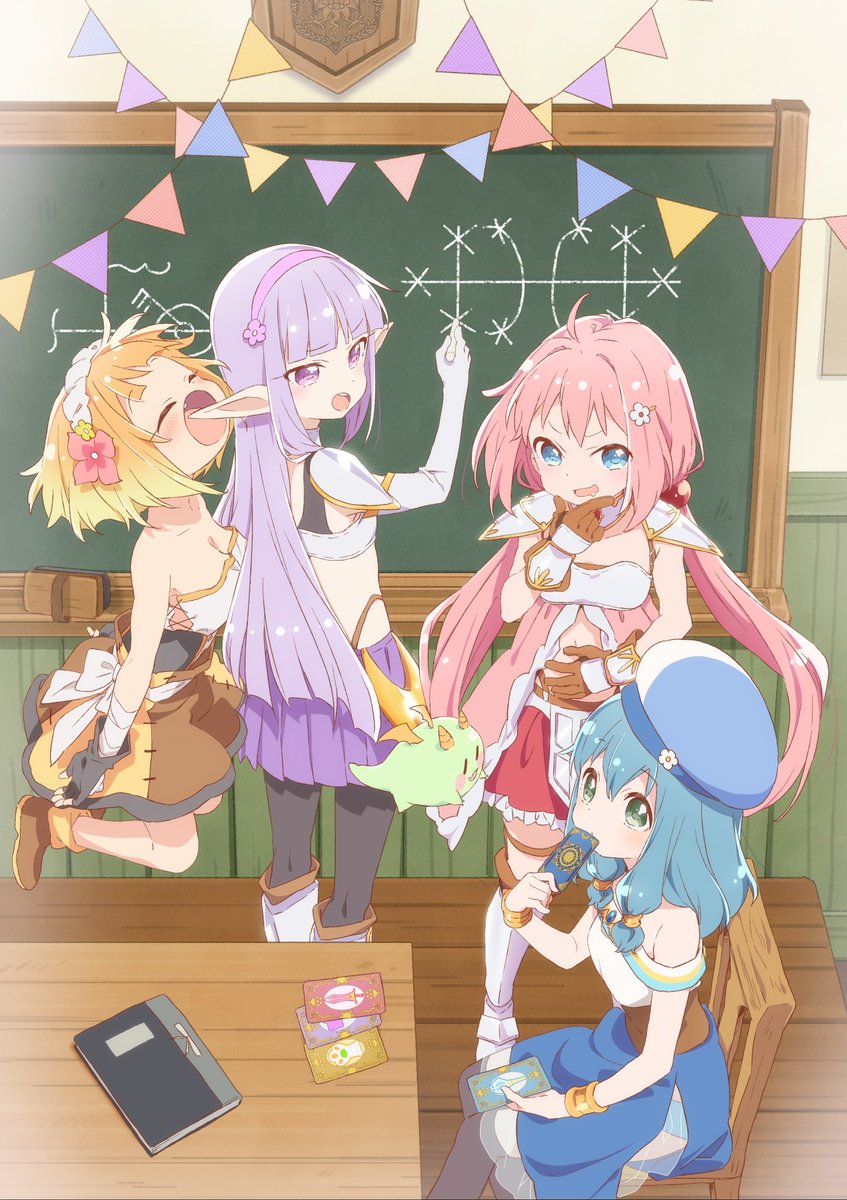 The end roll in a tabletop game determines the final fate of both the heroes and villains. Roll high, and victory rests on the heroes; roll low, and villainy takes the reins. So what happens when a bunch of misfit heroes gains the win, but completely messes up the execution? Writer Takashi Aoshima (Himouto! Umaru-chan, Gabriel DropOut) and YuruYuri creator Namori demonstrate such a situation in the original anime series ENDRO!

Starting off at the end, ENDRO! has the heroic team of Yuusha (Hikaru Akao/Amanda Lee), Seira (Shiina Natsukawa/Alexis Tipton), Fai (Ari Ozawa/Dani Chambers), and Mei (Inori Minase/Trina Nishimura) facing off against the Demon Lord (Tesshō Genda/Ray Hurd). After his defeat, the story seems to restart from the very beginning, with the four friends starting a new semester of Adventure School. That's when their teacher announces a quick retirement, with his replacement being a small devil-horned girl named Mao (Misaki Kuno/Alison Viktorin). Unbeknownst to Yuusha, Mao is really the demon lord in her true form, after it's revealed that their final maneuver shot her back in time and lacking a good dose of her powers. 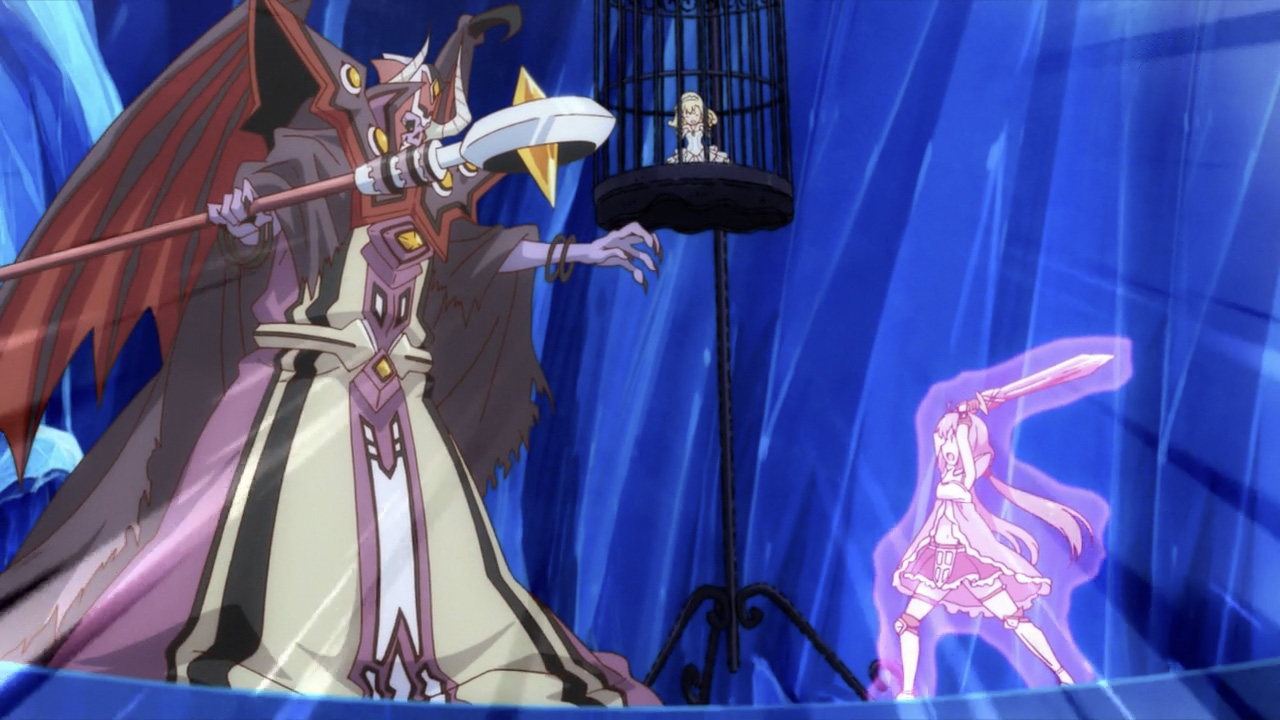 Mao at first makes it her mission to keep Yuusha and the team from growing into the heroes they'll become. However, the plan backfires when it's revealed that -- despite their dimwittedness -- the team is unfathomably lucky in their quests. Quickly, Mao gives up her plans to rule the world, and watches as her students become stronger with every mission taken. From finding a lost cat to...finding five lost cats, the team makes it their goal to become the next generation of legends that stories tell of.

Throughout the adventures being showcased, ENDRO! places a big focus on the art of being ridiculously lucky. Despite their somewhat good skills, everyone on Yuusha's team has a bad sense of how dangerous a task can be. Even with their adorably magical dragon Chibi (Asuka Nishi/Lindsay Seidel) by their side, almost everyone just about overcompensates their talents when faced with peril. But somehow, via either the powers of Deus Ex Machina or the utter stupidity of villains, they come out of it unscathed and with loads of riches. Even Mao has a hard time believing in their journeys, until Princess Rona (Momo Asakura/Amber Lee Connors) joins the Adventure School and jots down all of Yuusha's adventures. (I'd like to say it's for future records, but it's more than likely due to her "fated" crush with Yuusha.) 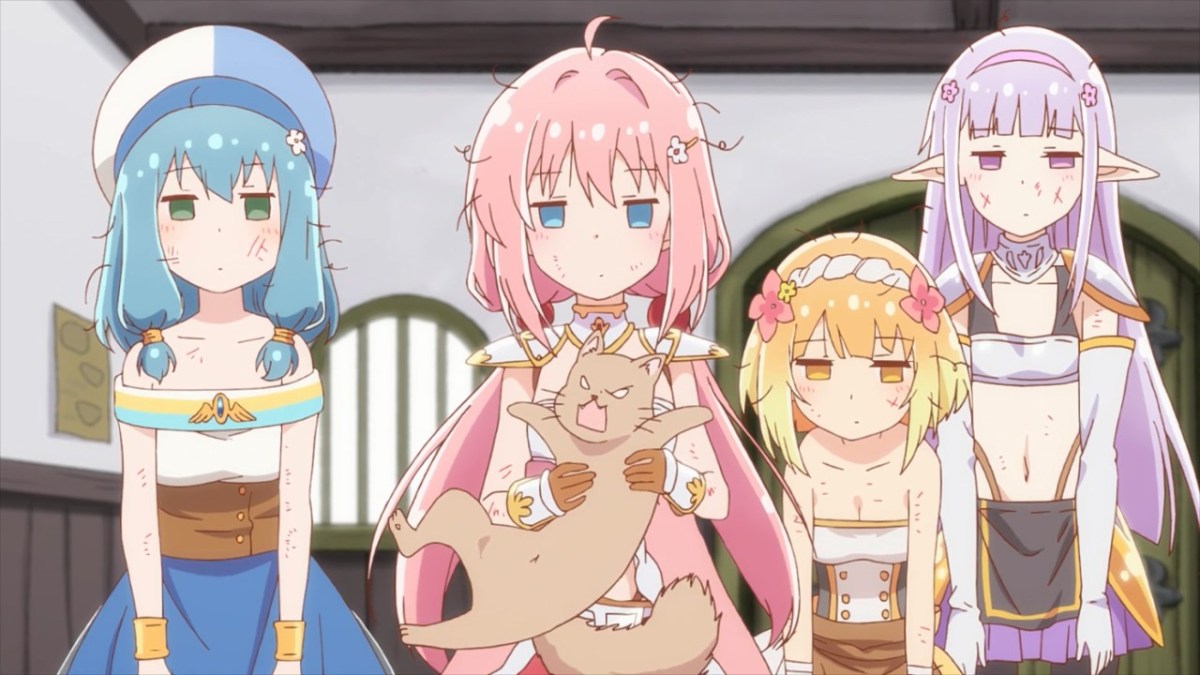 All of this is presented with a huge dose of humor at around every corner. The camaraderie of Yuusha, Mei, Seira, and Fai not only showcases the close friendship they have, but also the folly that's bestowed upon each of them. From Yuusha's ditzy mannerisms and Fai's never-ending hunger to Seira's motherly instincts, the personalities each person has conflicts with the ways of heroic behavior. (Mei's focus on the card-based magic Cartado is the only gag that gets pretty old, although it does lead to a pretty funny episode that's focused on her obsession.)

Even Mao's flaws are in full swing in ENDRO!, as the series demonstrates her true self. At first, you laugh at her for such things as keeping a book of poetry or her drunken mannerisms. (Seriously: can someone explain how little folk get drunk off of orange juice in anime?!) But what's at first a laughing matter is suddenly transformed into a tale of tragic fate. You learn about her lonely side, and how she wishes that she wasn't destined to either destroy the world or be killed. It presents the villain as a strong tragic figure, one that -- even when her identity is discovered -- is somewhat given a pass due to what she truly desires. 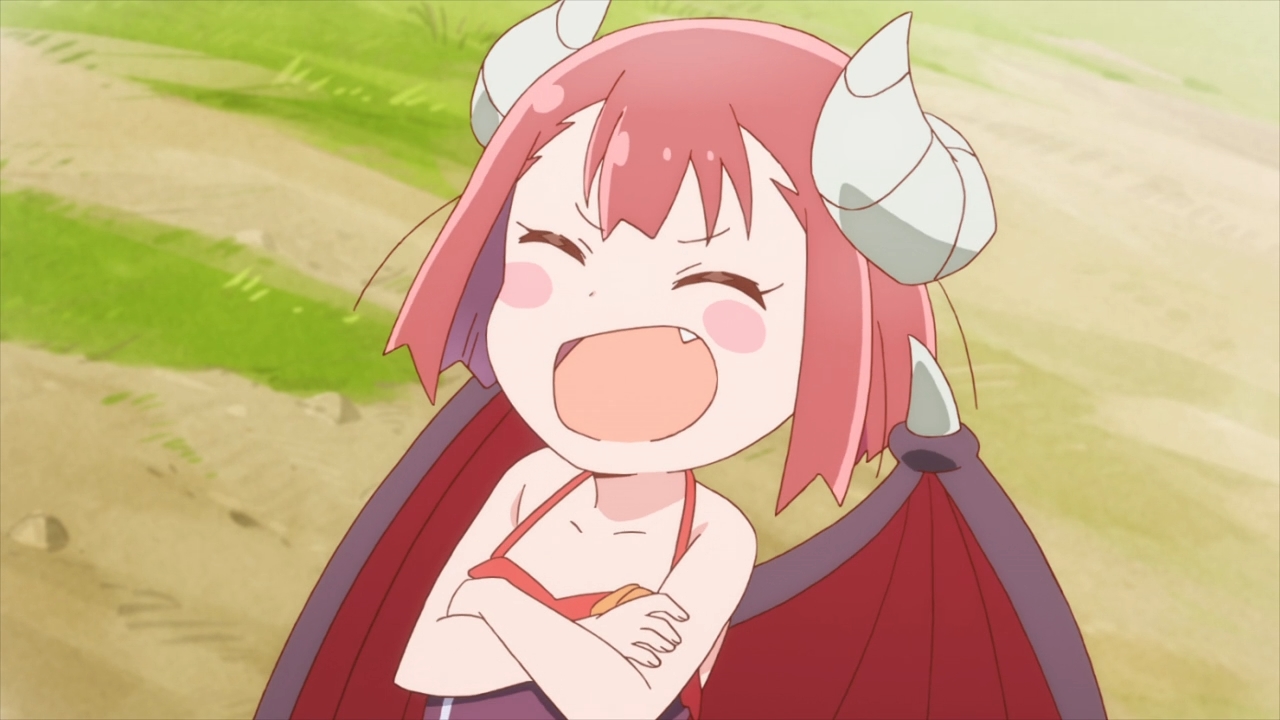 As such, the main focal point of ENDRO! is the heart of these characters. They're goofy and can get a bit ahead of themselves, but what matters most is their determination to find the right way to complete a quest. No task is too big or too tiny for Yusha and everyone to take on. From giant monsters to messy demon lord rooms, the crew focuses on the tasks at hand with a big smile and bucket of hope by their side. Thanks to that mentality, the series delivers a heroic story that's more meant to make you smile rather than root loudly for the strongest of warriors.

Studio Gokumi (Tsuredure Children, Kin-iro Mosaic) captures the bright and cheerful mentality of ENDRO! in its bouncy animation. The worlds look gorgeous in a Disney-friendly way, with the background popping out with lovely colors all throughout its runtime. It matches well with Namori's character designs, as their cuter looks fit well with both the realm and tone that the anime is trying to tell. Surprisingly, battle sequences look far better animated than any humor-focused series deserves to have, with even giant monster battles presented with incredible detail. 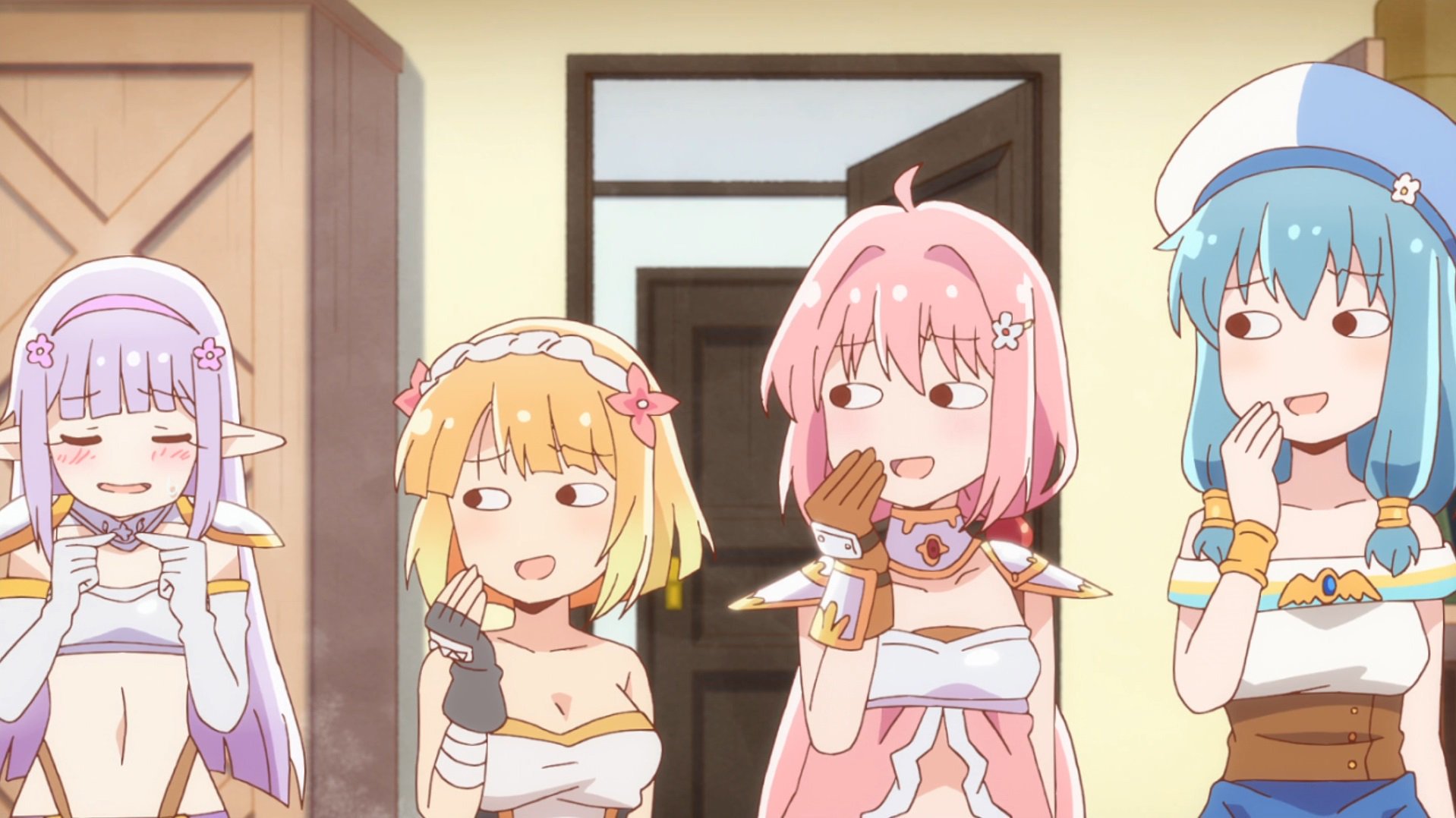 On the Japanese side, the voice cast fits perfectly with their roles. Akao's Yuusha is the right amount of peppy with a hint of idiocy, whereas Fai's tomboyish mannerisms are presented via the scrappy personality performed by Ozawa. As for the English dub, despite the characters sounding a bit older than they should, the cast gets their mannerisms down pat. This is very evident in Nishimura's portrayal of Mei, who manages to actually have some of the character's puns sounding understandable in the dub. (They're still groan-inducing, but that's part of the gag.) In both dubs, Mao steals the spotlight at every turn, with Kuno being cuter in her performance and Viktorin having a more bratty, sillier persona.

Composer Yoshiaki Fujisawa (Love Live!, A Place Further Than the Universe) crafts a soundtrack worthy of any Square Enix RPG. From the loud heroic tunes to the more comedic ones, the timing of the music fits perfectly with the story and characters that are presented throughout the show's twelve-episode run. The main cast take the reins for the opening theme "Endoro~ru," an incredibly fun and lighthearted song that will stick with you for days on end. Minase goes solo for the end theme "Wonder Caravan!," a softer melody that feels more akin to a lullaby for a soon-to-be sleeping hero.

ENDRO! isn't a story about the bravest of heroes, nor are they the most competent. Instead, this original anime focuses on the most important aspect of a true noble warrior: their heart. As such, the crew of Yuusha, Seira, Fai, and Mei showcase a plethora of warmth and welcoming vibes wherever their journey takes them. With the aid of a very funny script and a strong moral compass, ENDRO! shines as one of Winter 2019's most memorable and joyful anime.

ANIME REVIEW | Love is a Battlefie...