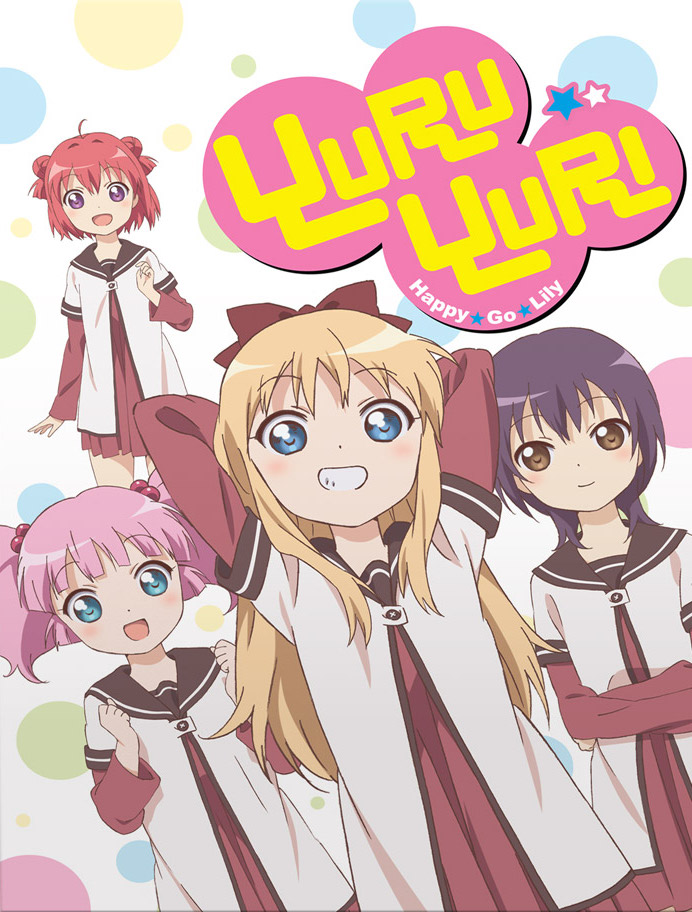 Ah, the junior high/high school slice-of-life comedy. We've seen many incarnations of this in the past; some working out great (Azumanga Daioh!, Lucky Star), others not-so-much (Hyakko!, YuyuShiki). However most of these series manage to walk away from the anime realm after one season, never to return to the TV screen. So what is it about YuruYuri that not only made it popular, but also managed to get three seasons out of it?

To be honest, I wasn't quite expecting much from YuruYuri. Its premise is rather non-existent, as it follows the members of both The Amusement Club and Student Council at Nanamori Middle School doing their day-to-day routines while goofing off in and out of the classroom. In fact, that's the whole show in a big nutshell. What then helps to keep this show thriving? Well, there are surprisingly some good reasons behind this. 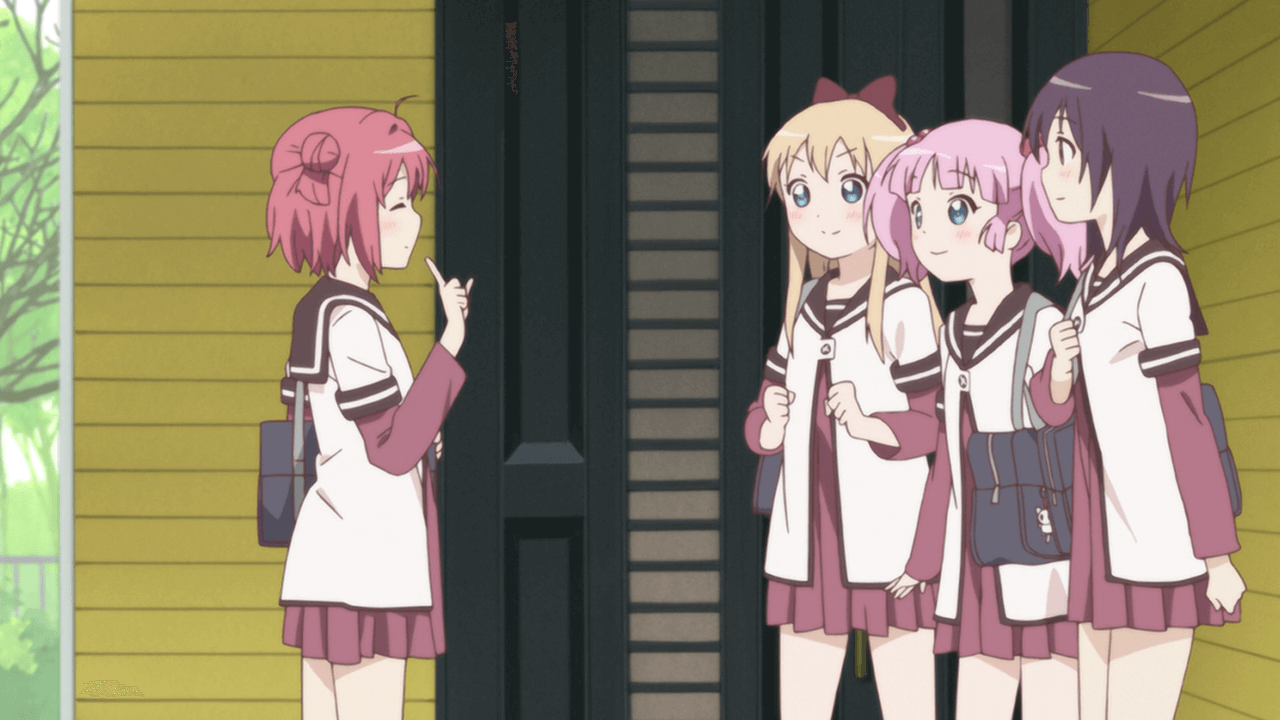 For starters let's look at the characters. First we have the Amusement Club, made up of Toshinō Kyōko (Yuka Ōtsuba), Akari Akaza (Shiroi Mikami), Yui Funami (Minami Tsuda), and Chinatsu Yoshikawa (Rumi Ōkubo). They hang out, goof around, help out Kyōko with her dojinshi, and have themselves a good time. It's how this is all portrayed that makes it a worthwhile watch. The banter these characters go off on is actually pretty funny in some cases, with moments of slapstick and physical humor helping to push a joke sometimes even further. (A running gag involving Akari lacking presence hits its mark almost every time, especially with the fact that the show introduces her in a way that makes it seem like she'll be the main focus.)

For the Student Council there's Ayano Sugiura (Saki Fujita), Chitose Ikeda (Aki Toyosaki), Sakurako Ohmuro (Emiri Katō), and Himawari Furutani (Suzuko Mimori). Again, like the Amusement Club, the humor that comes from these characters is also fairly enjoyable. The segments with Sakurako and Himawari alone are almost worth the price of admission, as their friendship is built upon the two bickering at one another like they're Ian McKellen and Derek Jacobi in an episode of Vicious. Then there's Chitose and her magical nosebleeds, which occur when she fantasizes about two of her classmates getting together in a romantic fashion. 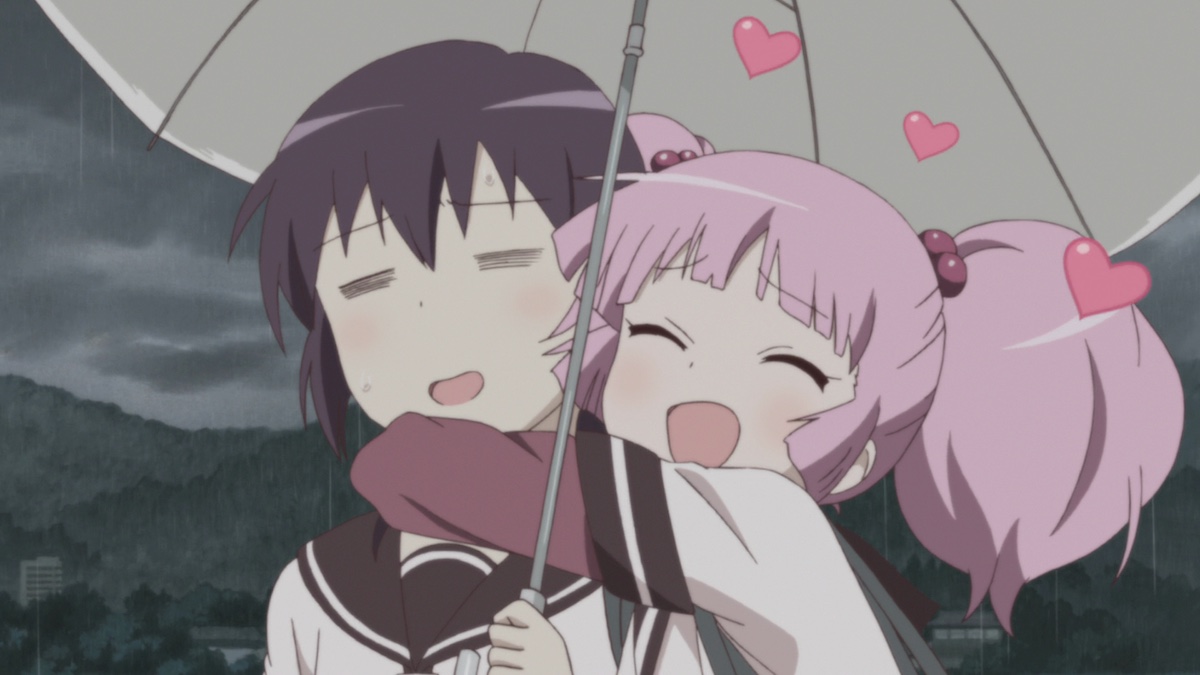 Now as you can guess by the show's title, YuruYuri is a yuri anime. However unlike something like Sakura Trick this series doesn't go the sometimes in-your-face route that some of these LGBT-oriented anime like to do on occasion (seeing as some writers don't often take the time to research the life of those in that specific demographic). Instead the romance aspect takes a back seat and focuses more on the friendship these two clubs have with one another. We get that Ayano has a thing for Kyōko, and Chinatsu is very much into Yui, but the anime is not about who falls in love with whom.

Rather, this is a series about the middle transition of school life. It's that weird period between elementary and high school, those 2-3 years spent in junior high when you slowly start putting down the action figures and Barbie dolls and instead begin to wonder about your purpose on this big blue Earth of ours. Some people take this moment of our lives seriously, whereas others like to get all the sillies out of their system before they jump neck-deep into a high school mentality. In YuruYuri there are those who are serious (Ayano and Yui), those who are goofballs (Kyōko and Chitose), and then the rest fall somewhere in-between these two mentalities. 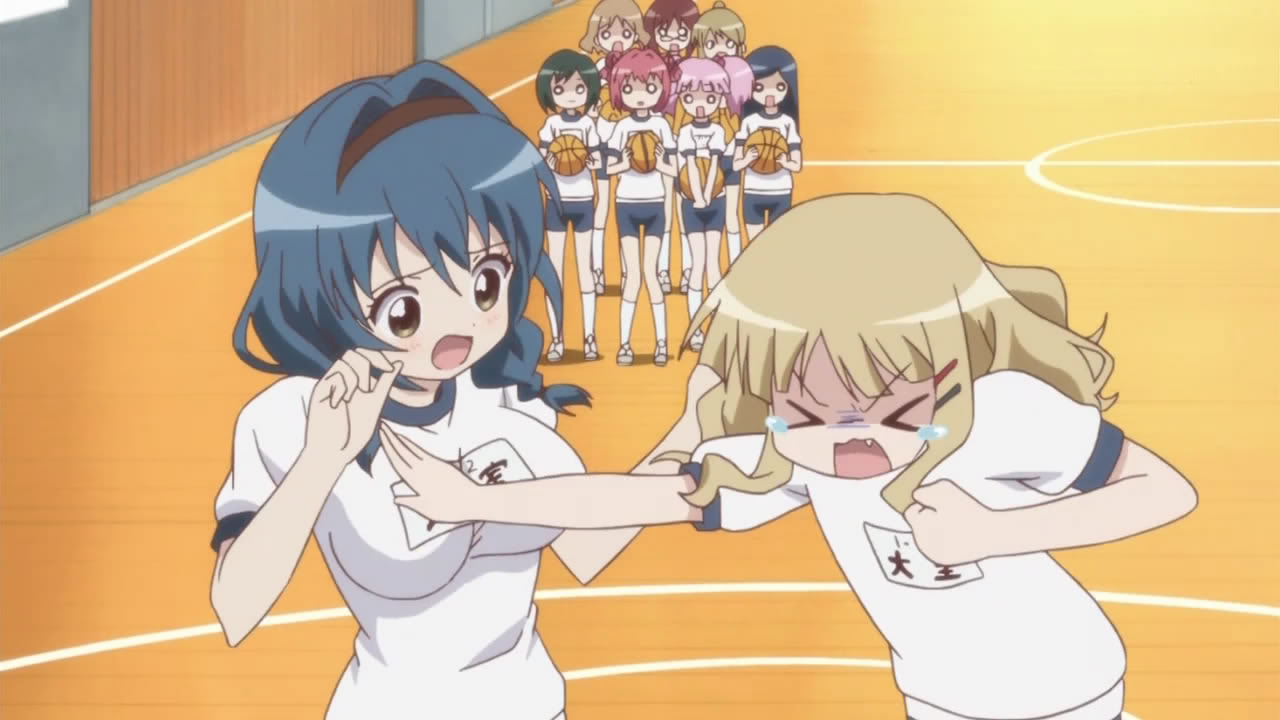 How they portray this is is somewhat on the dot of how middle school life can be at times. Yes, there are times when the show lays in the goofiness a lot (an episode where Akari finds a time machine comes to mind), but when it gets down to it YuruYuri captures that moment that occurs between the ages of 12 and 14. Although the cast is all-female with nary a sight of a guy to be found in the entirety of its three-season run, there are moments that are captured in these girls' friendships that just about anyone with either an X or Y chromosome can relate to.

A lot of the credit for the writing goes to its original manga writer Namori, but for its first two season the writer & director team of Takashi Aoshima & Masahiko Ohta (the same duo behind The Troubled Life of Miss Kotoura, Love Lab, and Himouto! Umaru-chan) captured the essence and humor first seen in the comic and presented it in anime form with their trademark style. Season 3, on the other hand, was done by director Hiroyuki Hata and writer Makoto Fukami, and while it lacked some of the trademark bits of the first two seasons it still managed to be both as funny and entertaining. 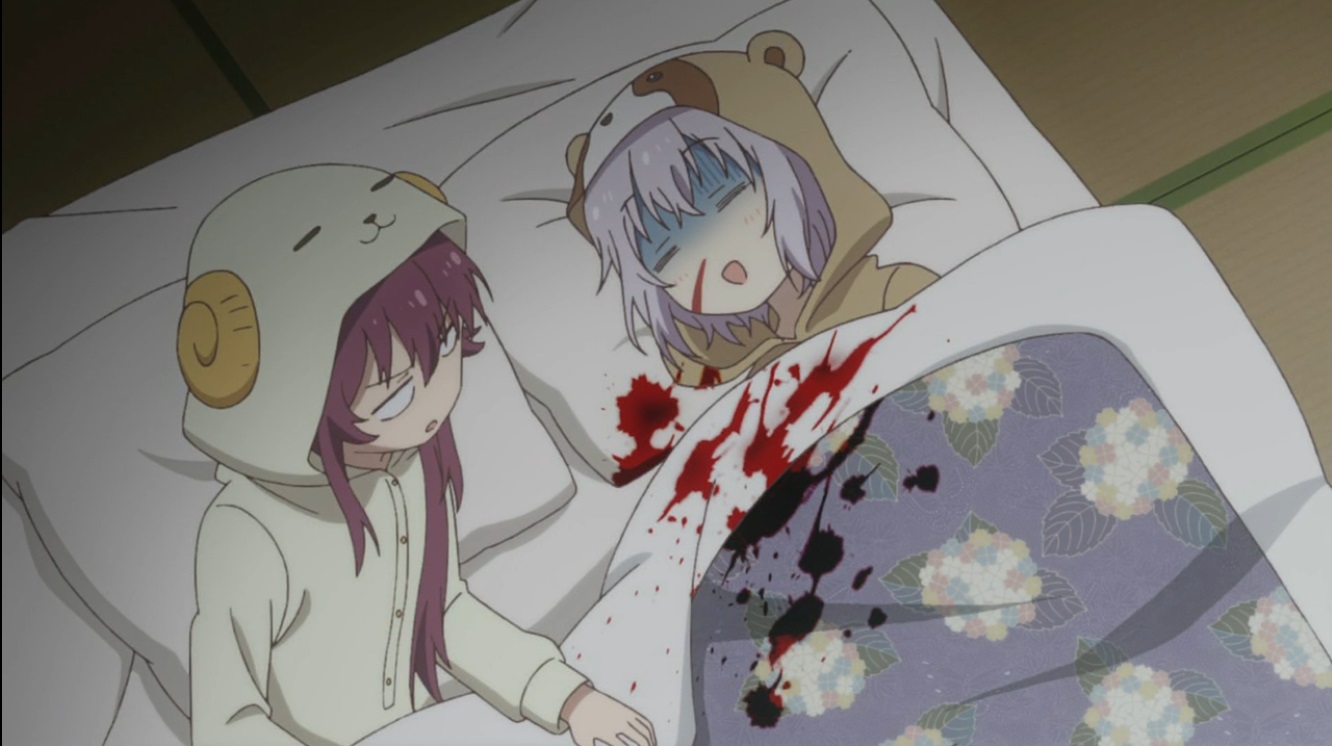 As for the animation, the first two seasons easily had the third one beaten. Produced by Dogakoba the first 24 episodes were filled with bright characters and worlds, as well as some of the better non-sequitur gags seen in the series' run. When TYO Animations took over Season 3, the show lost a good dose of its physical brightness, but made up for it by upping the ante on its slapstick. (A great example involves the girls teaching Himawari how to do back hip circles in PE, with the payoff resulting in one of the biggest laugh-out-loud visuals delivered in the anime.)

The same can be said about YuruYuri's music, with Yasuhiro Misawa helming the score in Seasons 1 & 2, while Yoshiaki Fujisawa took the reins for the third one. Comparing the two I found Fujisawa's compositions to be more memorable, thanks to its more folksy tones and upbeat melodies. Misawa, while doing a decent job capturing the mood of the scene, lacked a certain heart in their pieces that was ever-so present in Fujisawa's. 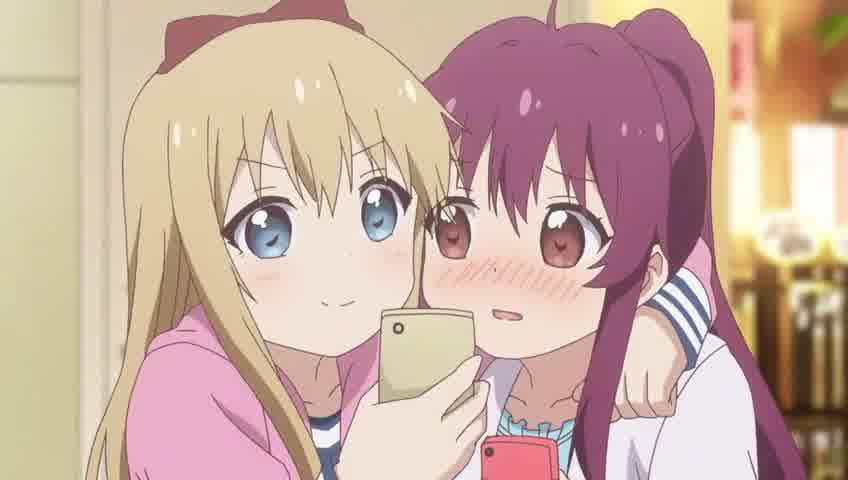 Lastly there's the voice cast, all of whom fit in nearly-perfectly with their roles. Ōtsuba and Tsuba's comedic chemistry meshed nicely in their portrayals of Kyōko and Yui, whereas Mikami plays off Akari's lack of screen presence with a go get 'em attitude. Both Fujita and Toyosaki are adorable as Ayano and Chitose, with the former adding in a tsundere attitude that feels more natural than forced. Katō and Mimori bring in the best laughs the show has to offer as Sakurako and Himawari, with their chemistry surprisingly the strongest out of everyone in the cast. Lastly there's Ōkubo as Chitose, and while she can be funny at times her charm can be overshadowed by her character's overt (and sometimes annoying) clinginess to Yui.

YuruYuri has lasted three seasons thus far, and for good reason. The characters are likable, the humor is very good, and the writing is surprisingly on the ball when it comes to its portrayal of middle school life. What's more, even when the yuri aspect of this anime comes to play, it is very adorable to watch it unfold. (In fact I'd actually call it more shōjo-ai than a yuri, to be frank.) It may not be as off-the-wall funny as Azumanga Daioh! or have the fast wit of Lucky Star, but for an easygoing comedy YuruYuri manages to deliver an extra smile before it's time to rest the night away.

YuruYuri can be viewed on Crunchyroll, and has been licensed by NIS America. Seasons 1-3 were observed for this review. Click here to purchase Seasons 1 & 2.