HomeAnimeYuri Anime Comedy More Than A One "Trick" Pony

Yuri Anime Comedy More Than A One "Trick" Pony 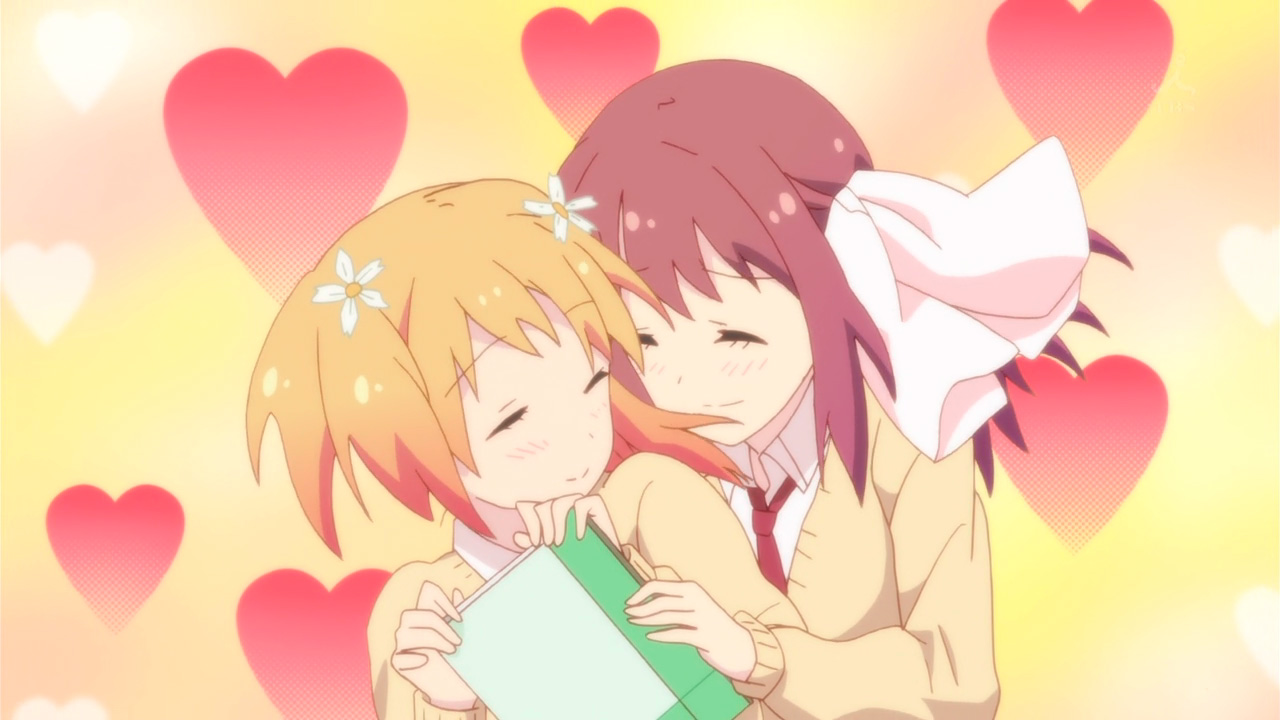 Yuri Anime Comedy More Than A One "Trick" Pony

In the anime realm the yuri genre -- one involving girl/girl relationships -- doesn't get as much attention as its yaoi counterpart. At times it can be pretty fan-service-y, focusing more at appeasing boys who may be watching it instead of the lesbian community it tries to portray. In other occurrences, such as in the underrated Sasameki Koto, a yuri anime can focus on building up a relationship that hopes to pay off in the end, providing a nice sense of realism in its storytelling delivery. This past winter's Sakura Trick is quite peculiar, as I'm having a very difficult time justifying who it's for.

Let's begin with the plotline of the show. Based on the four-panel comic by Tachi Sakura Trick follows the lives of Haruka and Yuu, two best friends about to start off high school. On their first day they find themselves sitting on opposite ends of the classroom. Worried that this would put a dent on their friendship the two decide to try to one-up their friendship by doing something special: in an empty classroom they share a kiss, which blossoms their closeness to a whole new level. 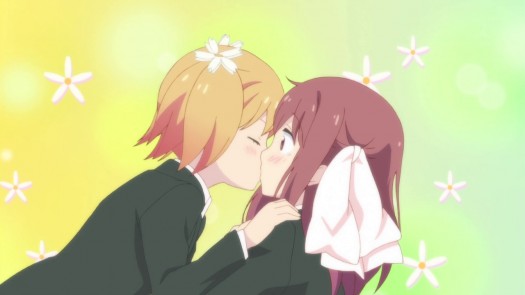 As a lesbian relationship is still kinda taboo in Japan the two decide to keep their togetherness somewhat under wraps, but always finds a way to show their love for one another. They hang out with their friends (one duo, of which, is somewhat doing the same thing as Haruka and Yuu), growing up the way students do as the first year of high school passes by. However the closer they get the more revealing their relationship becomes, which may pose a problem if Yuu's older sister and class president Mitsuki finds out.

Since Sakura Trick is a comedy the anime likes to throw in as many laughs as it can. For the most part it works, especially in one episode where Haruka invites Yuu to a family wedding, with Yuu thinking it's a wedding ceremony for the two of them. The show also plays off the laziness of Yuu, as well as the romantic fantasies that Haruka has, with the chuckles coming hurtling at a good pace. Even when Mitsuki comes into play with her feelings for Haruka the humor can be very well-done. 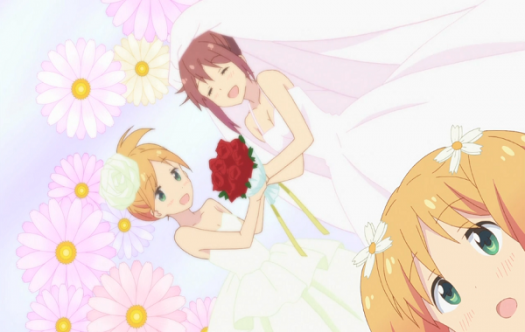 There is an issue with the realism of this anime; it comes in the form of the fact that all the main girls in the show seem to be hooking up with one another. I'm not saying such a thing can't happen, but it just feels like most yuri anime series focus too much on high school girls falling head over heels in love with each other. Now if this took place in a college setting, then yes this would be pretty common. (As an alumni of Salem State, I can confirm that openly-gay relationships were more of a norm than straight ones on our campus.)

Don't get me wrong: I'm not criticizing the romanticism aspect of the show in any way. Rather I am actually quite happy to see an LGBT romantic comedy shine light on a relationship and do what it can to treat it as the norm. I just think that it would do both the story and the cause better if the relationship between Haruka and Yuu was put side-to-side with a boy/girl couple (and perhaps even a boy/boy one), to showcase how we as humanity have evolved in our perception of such relationships. There's a chance that the original writer Tachi has some difficulty trying to portray such a setup, as it's still a mentality that's not gaining traction in Japan as fast as America has. Maybe someday an anime will be able to pull this off, but for now we must wait for it to happen. 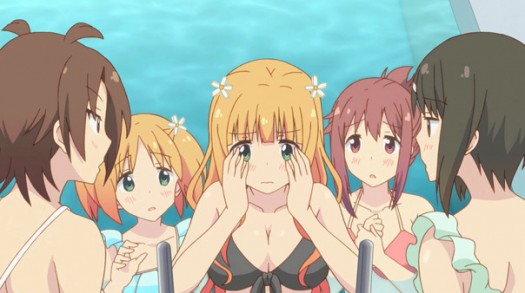 Animation-wise Sakura Trick looks great, from the way the characters and settings look to the way the cherry blossoms dance in the air as they float off the ground. The folks at Studio Deen, known for their work on Ranma ½ and Gravitation, have captured the innocence of the story and the comedic feel of the characters' surroundings very well, and while it's not the best-looking anime this year it does the job needed for an anime romantic comedy. Its score, composed by Ryosuke Nakanishi, sometimes captures the mood right, but other times it can feel quite cookie cutter. The same can be said of the show's opening and closing theme songs, although the ending has the better advantage of having a cuter feel to it.

The seiyuu in the show, on the other hand, do a fantastic job with their performances. Haruka Tomatsu and Yuka Iguchi as Haruka and Yuu carry the show for the most part, playing off both their friendship and romance in such a way that you can root for things to go well for the two in the end. Saki Fujita's Mitsuki can get a little annoying at times, but as she is the nosey older sister the route Fujita took with the character can be somewhat justified. The rest of the cast help to cement the main people in the show, bringing forth some good laughs and silly banter.

While Sakura Trick may not change the minds of the prudes that are against such relationships, it does the job of putting a smile on one's face pretty well. This may not be the strongest yuri title to come out in Japan, but for a genre that seems to push more emphasis on fan-service rather than good storytelling it is a breath of fresh air to see such an anime come out of the woodwork. It's not quite as realistic as what I've seen through my friends' relationships, but as entertainment Sakura Trick is a short, fun twelve-episode run that a good chunk of people will enjoy.

Sakura Trick can be viewed on Crunchyroll, and has been licensed by Sentai Filmworks