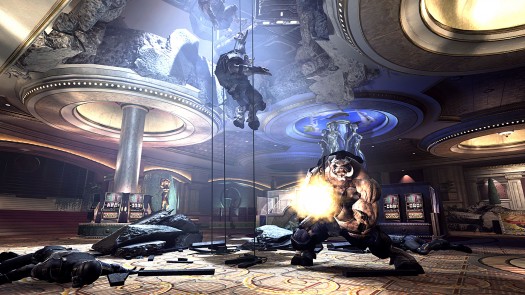 Those wanting to get their hands on Duke Nukem Forever on May 3rd will have to wait another month.

In a video with Gearbox Software President Randy Pitchford it was announced (humorously) that Duke Nukem Forever has been moved to a June 14 US release date, with a worldwide release on June 10. Why it's coming out last in America is anyone's guess.

Here's hoping the delay will mean they'll fix the driving aspect of the game. 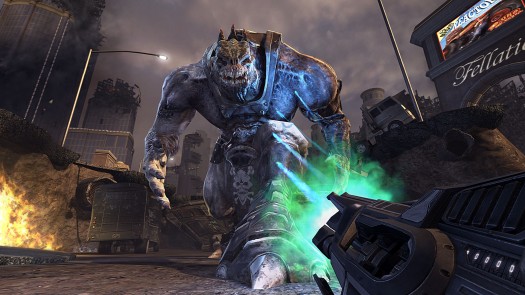 UPDATE: 2K Games and Gearbox Software have issued a press release regarding the manner:

After 15 years (and six short weeks) the King is almost back!

New York, NY – March 24, 2011 – 2K Games and Gearbox Software announced today that Duke Nukem’s glorious comeback in Duke Nukem Forever® will now explode at retail on June 10, 2011 internationally and June 14, 2011 in North America on the Xbox 360® video game and entertainment system from Microsoft, PlayStation®3 computer entertainment system and Windows PC. With gamers jumping out of their seats and waiting in line for hours to play the game at PAX East, it appears that the fans have spoken - Duke Nukem Forever is worth the wait.

“In case you haven’t heard, Duke never comes early,” said Christoph Hartmann, president of 2K. “We’re committed to deliver a laugh-out-loud, politically incorrect experience that people will talk about for years to come. We thank Duke’s fans for their continued patience - I promise this won’t take another 15 years.”

The incredibly unapologetic Duke Nukem Forever is the video game realization of the ultimate Hollywood summer blockbuster on steroids. Starring the iconic and legendary titular character, Duke Nukem Forever promises to reinvent the key ingredients necessary to create a summer smash hit that’s boiling over-the-top with irreverent humor, catchy one-liners that will make your mama blush, and frantic, bone-shaking action sequences that will simultaneously rock your world and neighbors’ walls.

“I'm very sorry for the added delay. We've all been working extremely hard and are very eager to deliver the game to you," added Pitchford. “I’ve been thinking of these lyrics from the great country song, ‘He's The Duke’ - ‘He told us if we waited we could Come Get Some, but I never knew Forever was going to be so long.'  If you're like me, June cannot come quickly enough."

In the interim, Duke Nukem Forever fans can pay their respects to the King by visiting the official Duke Nukem Forever website - www.dukenukemforever.com. It’s loud, lewd and definitely Duke approved. The site provides fans with stimulating content that will ease their eagerness, including Duke’s Boobtube channel and The Duke Cave, featuring babe and alien surveillance. Fans can also “come get some” by pre-ordering the game, along with the Balls of Steel edition, while supplies last.

To A Point, Web-Slinger Shatters E...