HomeVideo GamesWelcome to the "Homefront" 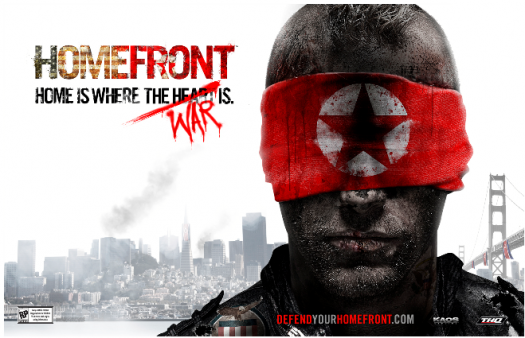 Damn right home is where the war is. I got my hands on Homefront, and I have to say that it's got some awesome gameplay!

Got your attention now? If not, have you checked to make sure you still have a pulse? You might want to do that, or consult your physician.

The idea of this game is the future "what-if" style games. Like many of the games that I own this title is one that deals with an economy similar to the one that we are experiencing now and tries to depict what might happen in the next 10 to 20 years. As another example of this type of game, let's look at another title from my collection: Frontlines: Fuel of War. I always thought Frontlines was an awesome game that just never "took off" or had mainstream commercial success in the way I thought it could or would have if I'm honest. The set up of the game is fairly simple: the fuel supply has gotten deadly low and Russia and China form an alliance to get the rest of the oil in the Middle East. In Frontlines you see the war up close and personal.

In Homefront it's as if America failed at everything they ever tried and a little-old-North Korea was able to turn into some kind of superpower, gain control over South Korea and some how take over Japan. While this is happening, America doesn't have the resources (and what not) to take on the country because America basically runs on Oil. Ultimately, the battle gets to the point where the Koreans have occupied America after pulling a fast one on the world (satellite of peace, my ass!) and the fight is on. 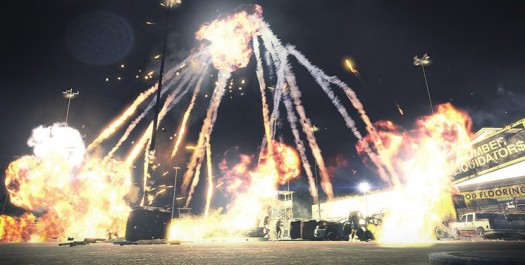 When this part happened in the game, my jaw dropped. White Phosphorous Mortar  B.B.Q.!!!

The writers of Red Dawn, and Apocalypse Now now bring you another kick ass story. I shouldn't have expected anything less. I notice more and more new game titles now are coming from novel or feature film screenwriters - writers who can easily bring to life a world that really only exists in their minds in such a vivid way that it seems kindergarten simple for a game designer to bring to the world through nothing more than pixels and light (dots on the screen) but present a world for the player to experience and see the realities of war without enlisting. Sure, life isn't about running around just shooting each other... but that's what multiplayer is for.

I highly suggest to anyone jumping on this title that it's smarter to play through the story mode of the game first - learning the control setup and getting comfortable with character movements instead of just barreling straight into the multiplayer and potentially messing up for your kill/death ratio score. 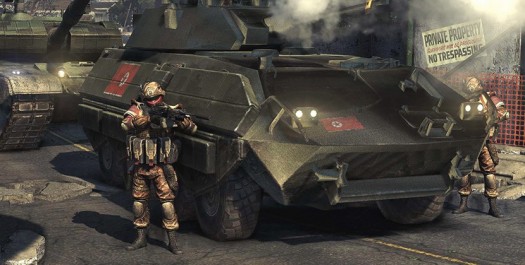 For a game that was designed and assembled from scratch, the gameplay is relatively smooth. There are a few rough edges, but they could be smoothed out, and I'm specifically thinking about the fluidity of character movement in the game. Imagine you are leisurely walking though a patch of enemy AI, the character movements seem rough and ridged and generally off to me. (How do you leisurely walk standing up straight and tall and stiff as a board?) I'm sorry, but I don't think a person who has been through the hell that is war and survived would return home afterwards and walk around like that.

Along with the walking, the running was kind of a joke. When running it seems like characters weren't moving fast enough, so the player loses the capabilities of effective "duck and cover" mechanics. The guns are great, but there just aren't enough of them. The game has 12 guns available with multiple set ups of red dot/scope systems you can put on the gun. 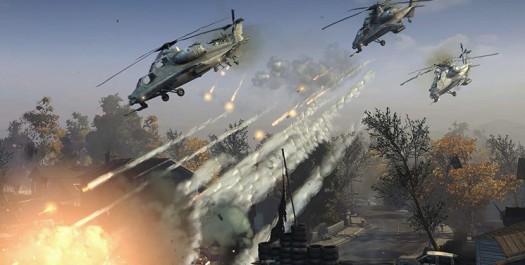 That's just a beautiful thing...wait a second, that's the Korean enemy! Run away!!!

The story it self starts you off sleeping in a crappy apartment, everything looks like it's been chewed up and spit out at least 10 times. Upon waking up you hear the radio and it's feeding you Korean propaganda, which kinda interesting to listen to actually. (Like the radio stations in Grand Theft Auto) Then there is knock at the door, someone asking for your characters name, and before you can open the door the K.P.A. (Korean Peoples Army) is already through it and beating you up. They interrogate you and tossing your ass down the stairs, toss that same ass onto a bus and we're off to the labor camps. Amazingly enough on the way to your laborious final destination, a Mack Truck from "The Revolution" comes smashing into the scene to rescue you.

The first level is pretty intense. Lots of running, and lots of shooting. Later on in the story you get to use the Unmanned Land Vehicle named Goliath! All I can say is once that that thing ends up being issued for real modern combat, I'm so joining the military. This U.L.V is what will save your ass when out fighting against the K.P.A. It comes with a special little scope, so when ever a tank/Humvee/helicopter/soldier comes up to attack it all you have to do is sight it on the scope and then "Bang! Boom!" your problems are all gone. 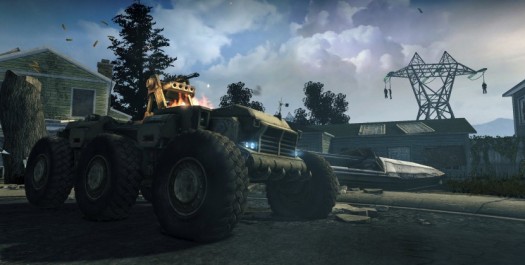 The only thing that makes me sad about Homefront is that the game play was very short. Playing on Normal difficulty, I was able to beat it in about 3 1/2 to 4 hours, but the awesome battle at the end on the Golden Gate Bridge was pretty epic and redeeming. I did feel like they (the developers) could of gone a bit further -- maybe allowing the player to push the Koreans all the way back into the Pacific Ocean -- but they stopped progress shortly after beating back the K.P.A. over the Golden Gate Bridge. I was kind of in that place of, "WTF?! Another game I spent the usual 60 bucks on short shifted me again and only gave me three hours of play?" However, a friend of mind made a great point that more and more developers are putting less effort into the actual story mode of action and FPS games to better focus their attention to the multiplayer piece, hanging their hopes on multiplayer to be the ultimate experience for the player to enjoy. 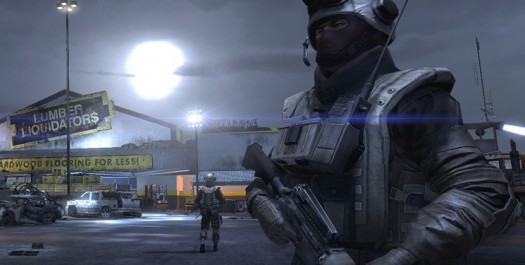 They did a lot of product placement! I mean, come on! Lumber Liquidators, Tiger Direct, Rain X!

In conclusion the gameplay is good, but it's not great. You have seven levels in the game: Why We Fight, Freedom, Fire Sale, The Wall, Heartland, Overwatch, and Golden Gate. It has a few rough edges which I hope KAOS Studios and THQ are able to patch up with an add-on or two. 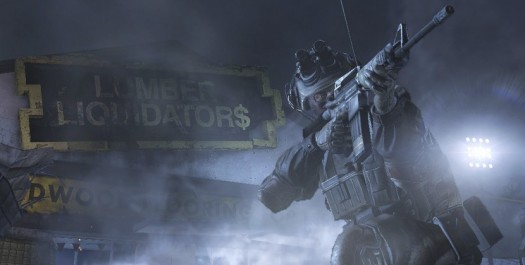 The Multiplayer is really good...when you can actually play online.

I was told this when I bought Homefront, that there had been some issues with the game servers, yet it says on the website that they are working around the clock to weed out all known issues. So I say within the next week or two things on the online aspect will be better. I do have to say that if you are buying a used copy of this game, and the code that comes with it has been used for that person multiplayer, get ready to shell out a couple bucks in order to play on the server. 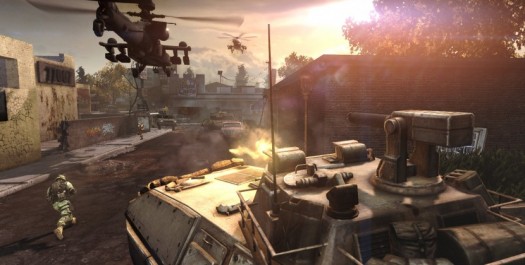 Perfect harmony: an A.P.C., a soldier running towards the battle and a helicopter kicking ass!

The multiplayer has 6 different versions of basically the same gameplay type: Ground Control, Team Deathmatch, Skirmish, Battle Comander (GC), Battle Commander (TDM) and BC Skirmish. If you're not confused yet, they have it set up as you might expect in your typical FPS games (think classic domination map with a twist.) They take the setup of three points you have to capture in order to move on to the next three points, almost like in Frontlines: Fuel of War. Team Death Match: If you don't know what that is, and you have been playing Call of Duty or something along those lines for too long, you need a dunce cap. Go sit in the corner, enough said. Skirmish: Takes the Team Death Match/Ground Control modes and switches between the two on the cycles of the maps so your not bored playing the same thing repeatedly. Now for the little bit of the difference from most of these modern/futuristic combat styles they created something called Battle Commander: You are able to hunt after certain enemies who have killed more (think kill streaks). It's a very interesting mechanic to toss on top of either the Ground Control or the Team Death Match modes. 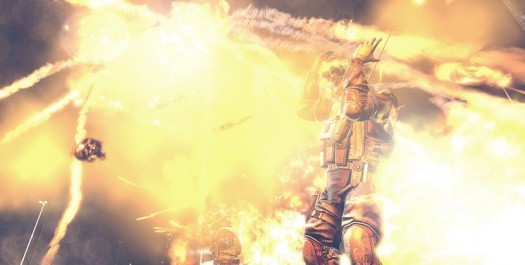 Homefront's online play is pretty fair considering all the problems they are having with the servers, but I warn you again if you think your going to walk on to the field of battle on this game whooping ass with out playing through the actual story mode of the game, think again. You will get turned inside out by every enemy on the field before you can blink an eye. You'll be like the guy in the picture above that got turned into B.B.Q from white Phosphorous Mortar shell.

For the Multiplayer (all problems aside) I give the online a 9.6, although THQ does need to step up some more of the different games on the play list.

Here are some more of the videos for Homefront!