HomeAnimeANIME REVIEW | Riffing on Anxieties in Brilliant "Bocchi the Rock!"

ANIME REVIEW | Riffing on Anxieties in Brilliant "Bocchi the Rock!" 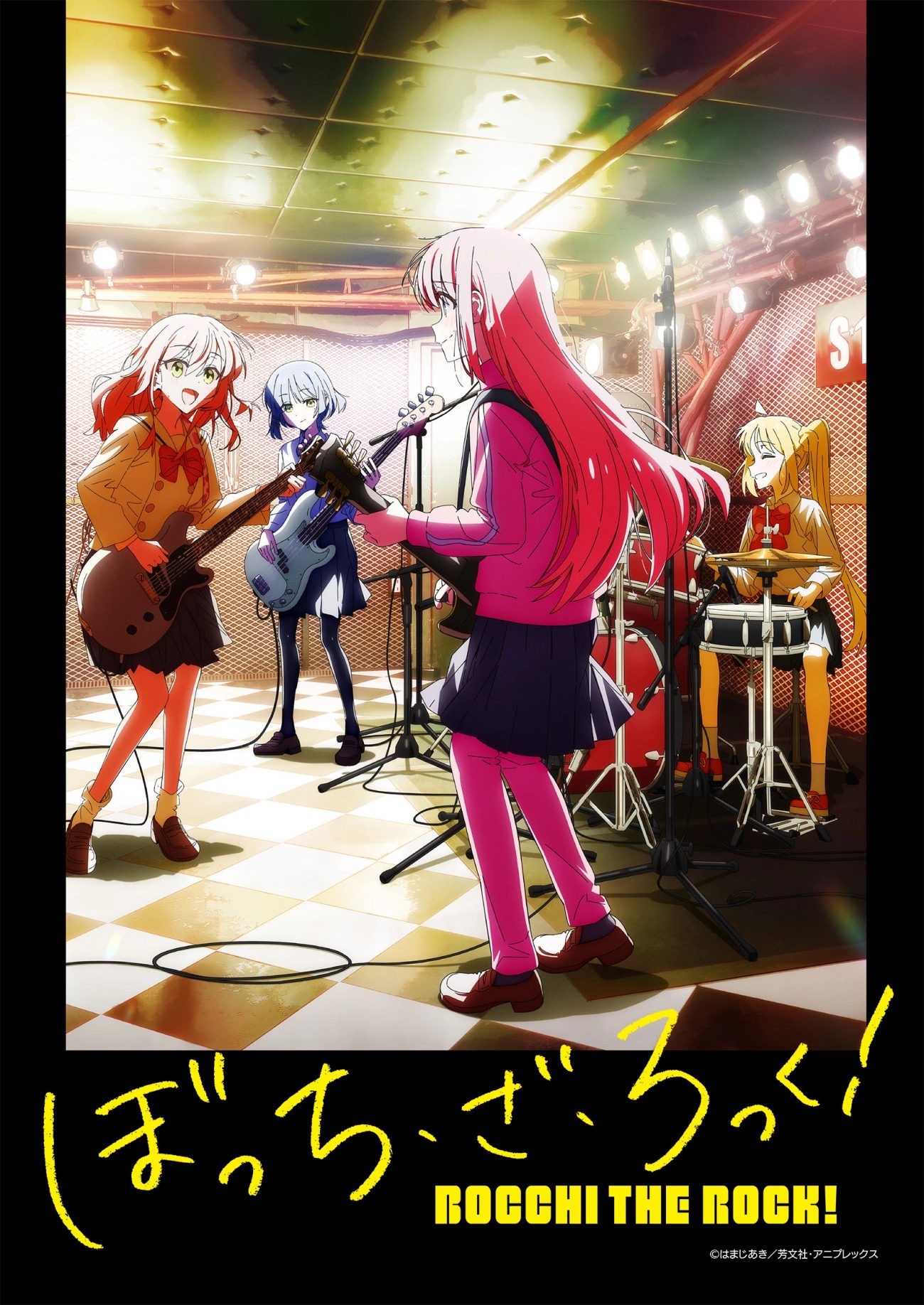 ANIME REVIEW | Riffing on Anxieties in Brilliant "Bocchi the Rock!"

Rock & roll was made for exposing one’s soul. Whether it’s first-world problems or dealing with severe circumstances, the art of rock has been the place to let everything all hang out for the world to see. But what if you’re the quiet type and have trouble showing your true self? As Bocchi the Rock! has shown us, even the most introverted person can become a rock god!

The “Bocchi” in the title refers to Hitori Goto (Yoshino Aoyama), a young girl who has trouble socializing with others. When she sees a popular band on TV talk about their introverted selves, Hitori straps on a guitar, and proceeds to learn to play guitar. That’s when she makes a goal to use her music skills to make friends, start a band, and play at her cultural festival. Three years fly by, and Hitori's become a true guitar maestro! Sadly, she has nary a friend or band to lay claim to. 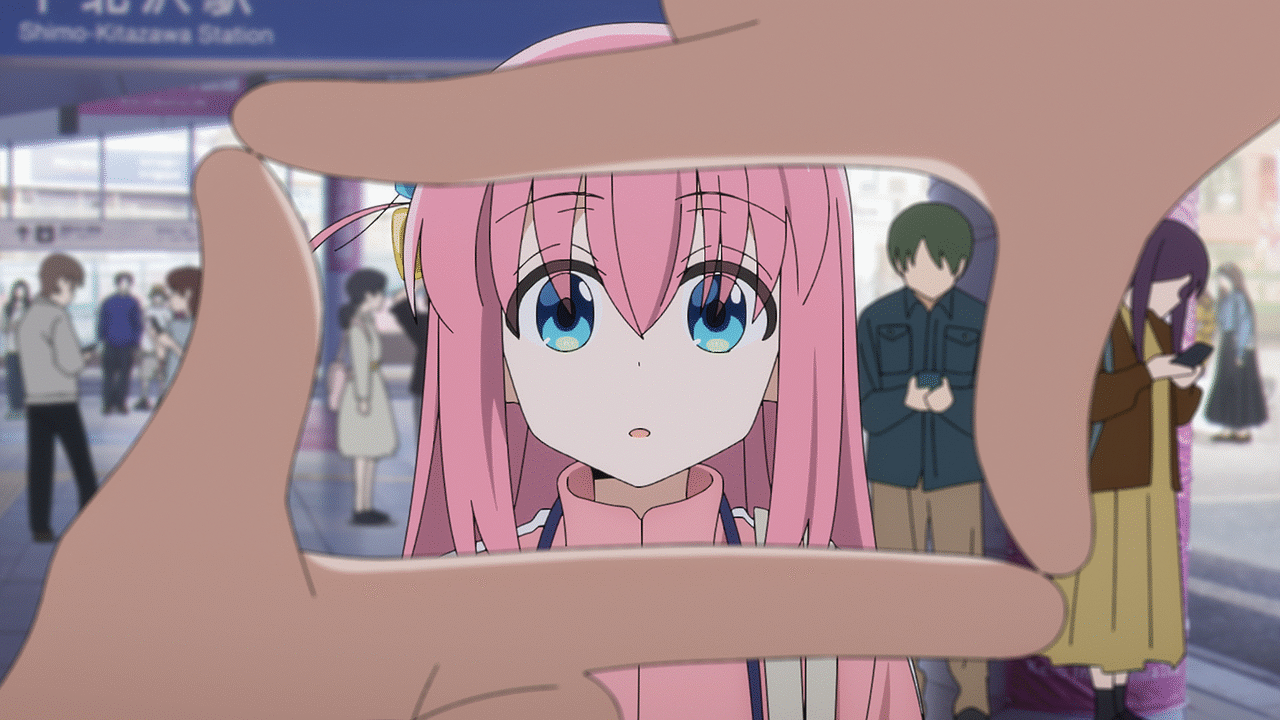 Fortunately, under the guise of “guitarhero”, Hitori does manage to garner a good online following. Still, her dreams of bandmates and friends feel too far for her, until Kessoku Band drummer Nikita Ijichi (Sayumi Suzushiro) shows up and asks her to join her band. Frozen with fear, Hitori follows Ijichi to her sister’s club STARRY, where bassist Ryo Yamada (Saku Mizuno) is waiting. After a little practice, their first live show, and the addition of vocalist/guitarist Ikuyo Kita (Ikumi Hasegawa), Hitori finds herself far closer to her dream of rock & roll stardom.

Okay, it’s not as impressive as it sounds. Poor Hitori’s first show is performed while inside a cardboard box, as the thought of being in front of people turns her into a blobby mess (both metaphorically AND literally). Her social anxieties never fade, even when her newfound friends give her the right kind of pep talk. Sure, it’s helping Hitori with a bit of her confidence, until any mention of anything remotely sociable transforms her into a stuttering freak show of a human being. 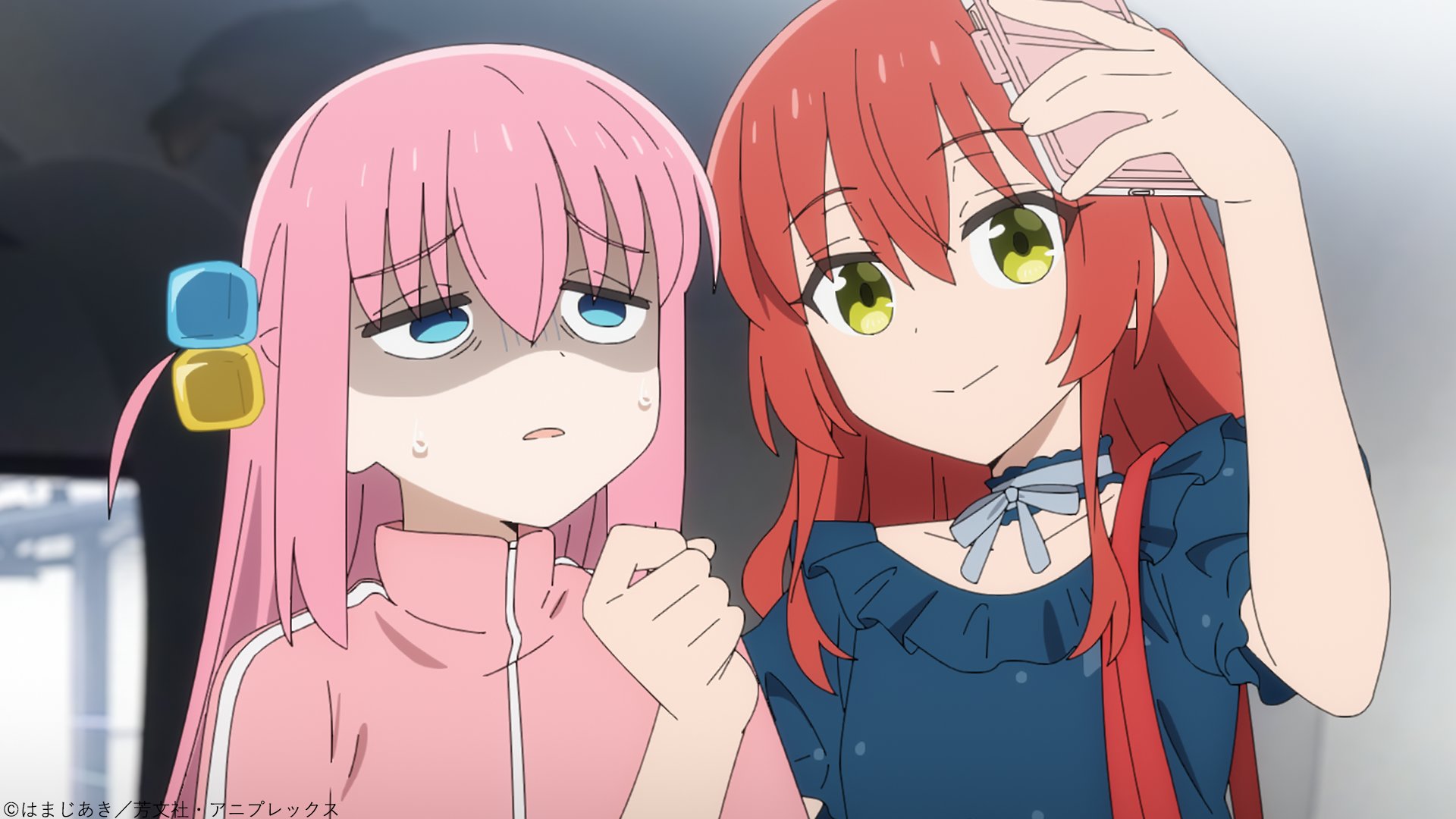 However, Bocchi the Rock! is the kind of anime that laughs with social anxiety rather than at it. The struggles Hitori faces every day will no doubt hit close to home to those who deal with being introverted. (Hell, I’ve lost count how many times I’ve uttered the phrase, “I’ve been there, Hitori-chan”!) It’s how they present our hero’s internal battles that makes this a series unlike anything else that’s airing this Fall 2022 season.

One of the ways it does that is via how CloverWorks (My Dress-Up Darling, Akebi’s Sailor Uniform) showcases these anxieties. What could’ve easily been just another cute girl anime instead goes beyond even regular anime-styled animation. Some anxieties are shown with traditional techniques; other times, live-action and claymation are added to the mix to emphasize the dark thoughts that run through a shy person’s head. Not only do they make it relatable, but also incredibly hilarious! 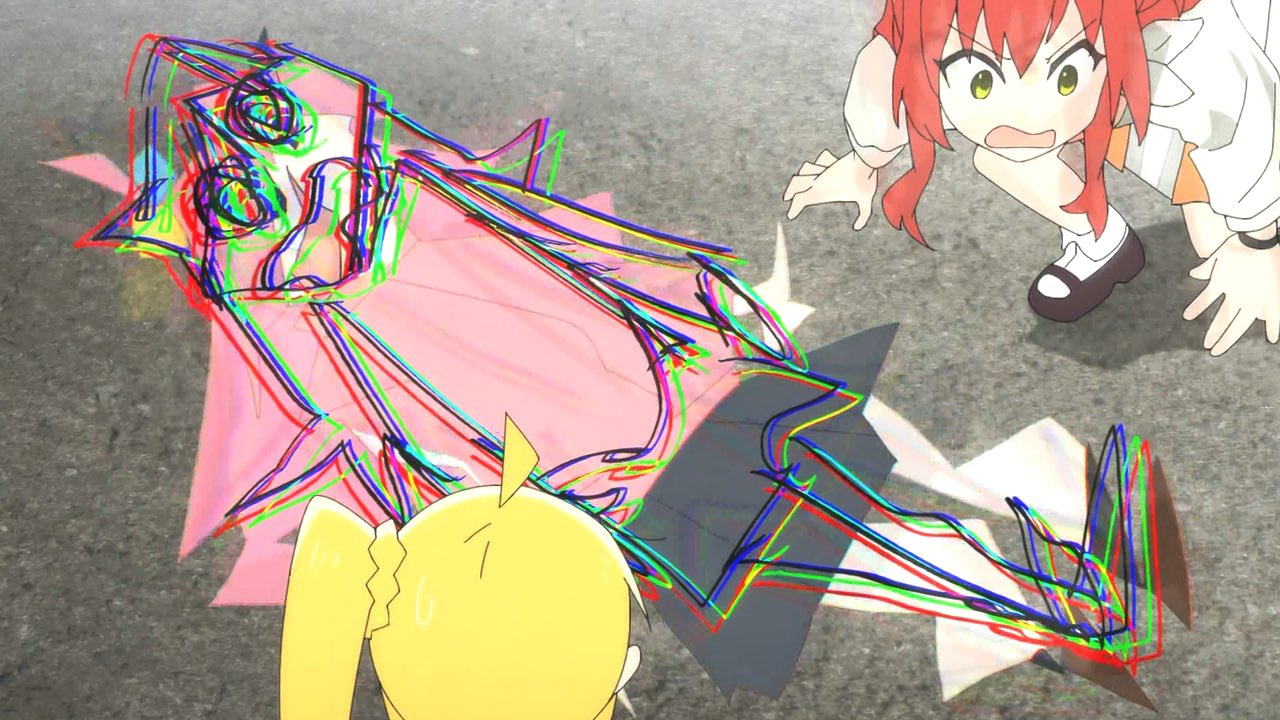 Perhaps Hitori’s greatest foe in Bocchi the Rock! is her overthinking imagination. In one instance, Kessoku Band is talking about starting a social media account, a thought that literally causes Hitori to glitch out. It then cuts to the introvert in a Godzilla outfit terrorizing a town, her way of envisioning what a “social media whore” is like. (By the way, please like & subscribe to my Twitter and Instagram! I’ll do unspeakable things for the attention!)

Thankfully, Hitori’s friends and bandmates never see her as a burden or poke fun of her introverted ways. Instead, they act like decent human beings and give her as much support as needed. It also helps that the other band members have their fair share of problems, especially when it comes to bassist Ryo and her spending habits. But like a good band and a great bunch of friends, they soldier through the tough times to make the best out of any situation. 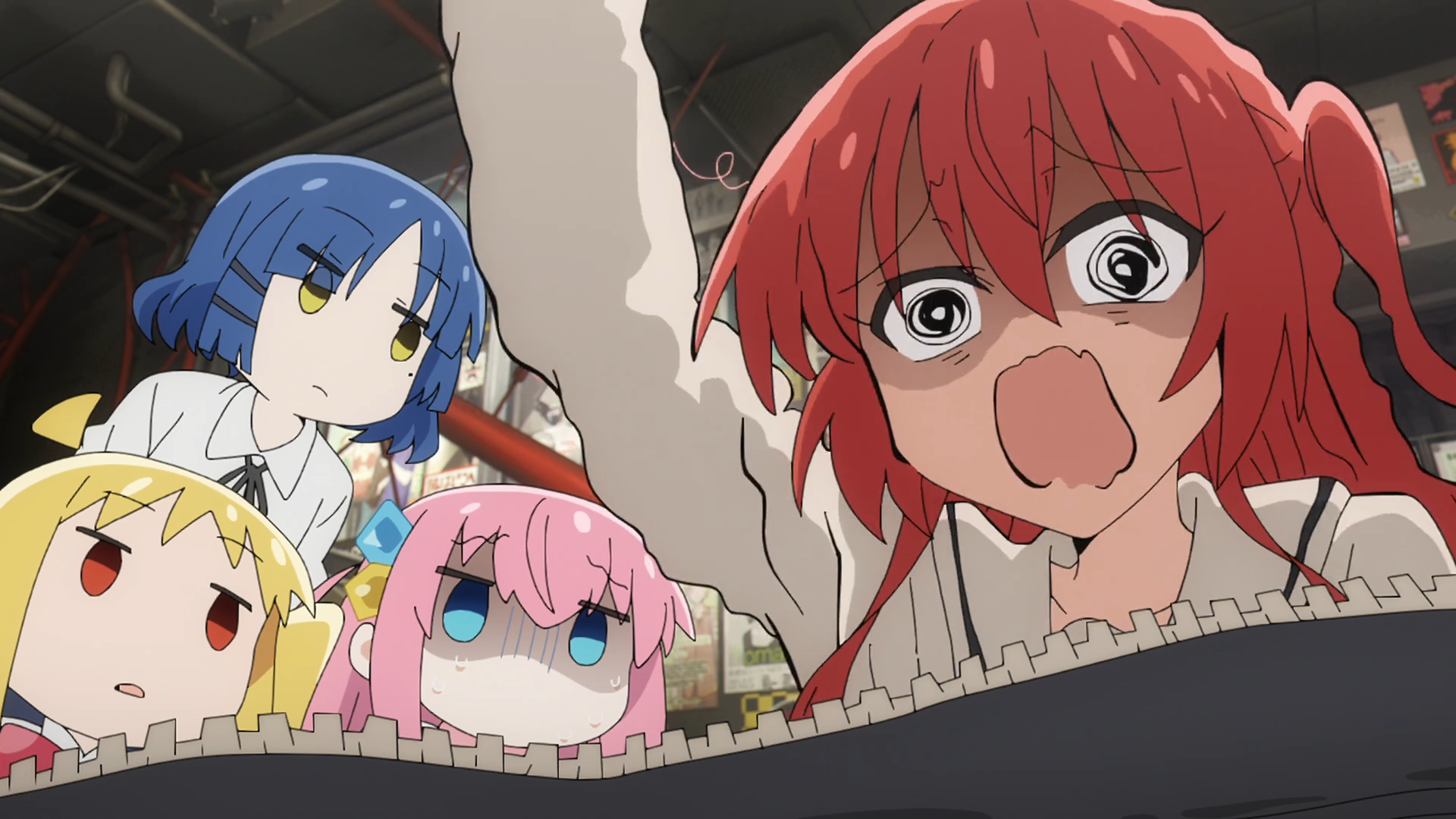 That doesn’t mean Hitori does nothing in return. Quite the contrary, the quiet guitarist knows how to support her Kessoku Band compadres in surprising ways. On top of being able to sell her share of the tickets (thanks in part to drunk bassist Kikuri, played hilariously by Sayaka Senbongi), their first paid gig is a success because Hitori’s the one to help the others shake off their stage jitters. It’s a moment where Bocchi the Rock! not only shines as one of 2022’s best shows, but one of the best music-based anime ever made!

Speaking of music, Kessoku Band has the strongest in-show anime songs since Anonymous Noise. On top of the opening theme song “Seishun Complex” — whose lyrics fit Hitori’s personality perfectly — other tracks such as “That band”, “DISTORTION”, and “Nani ga Warui” slap harder than they have any right to. It also helps that members of KANA-BOON and Tricot — two excellent Japanese rock acts — have aided in song contribution. (I'm only surprised that we haven't gotten any contributions from Asian Kung-Fu Generation yet, especially with each main character being named after their band members!) 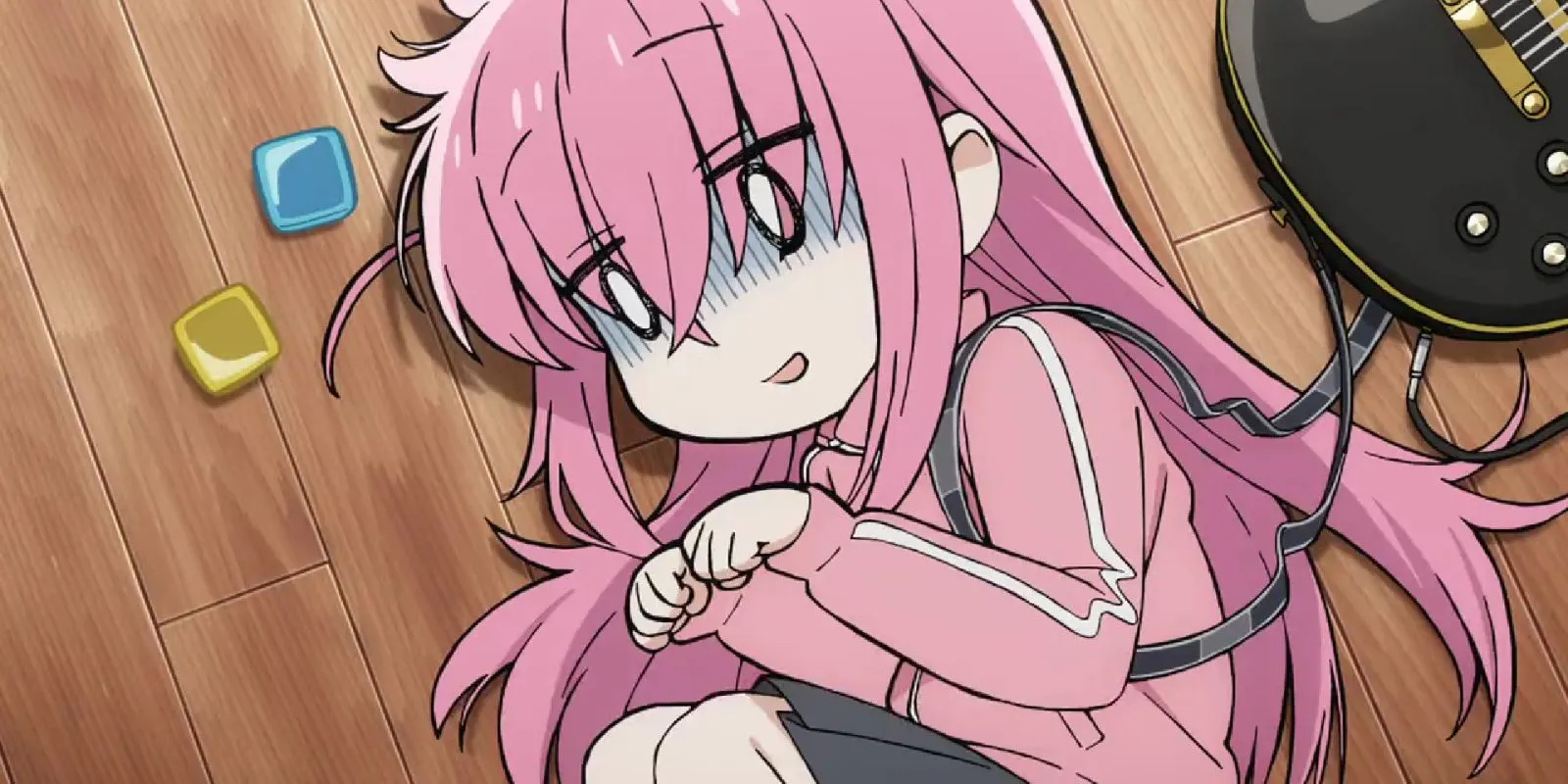 While everyone in the cast does a great job with their characters, it’s Aoyama as Hitori that holds everyone else together. How she mopes, cries, shrieks, and mumbles her way through the day is both funny and relatable. With all the levels of emotion placed throughout her performance, Aoyama can easily lay claim to the title of Best Voice Work of 2022. (I just hope we’ll get to hear Hitori sing in some fashion, albeit seriously and not as a one-off joke.)

In a season of many surprises, Bocchi the Rock! is certainly the biggest. Its comedy is out-of-this-world, while at the same time down-to-earth and relatable. On top of that, its music is some of the best you’ll hear in any medium. Not to put pressure on the poor introvert, but all eyes — especially musician ones — should be staring head-on towards everything that Bocchi the Rock! is accomplishing in its medium.