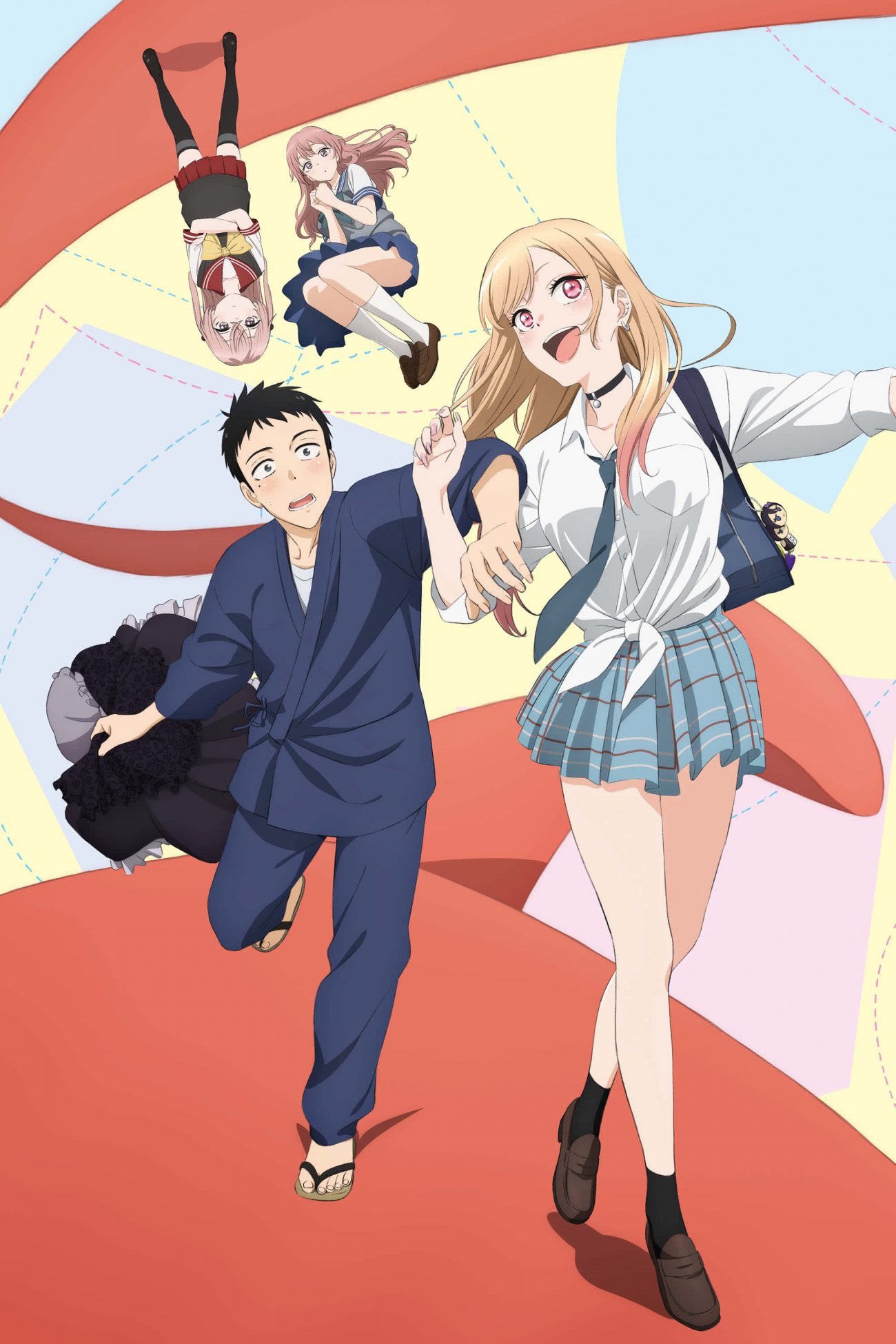 Once in a while, the anime fandom can unanimously agree on the greatness of a show. It’s a combination of strong writing, lovable characters, great animation, and solid soundtrack that has placed the likes of Cowboy Bebop, Made in Abyss, and Lupin the Third on immovable pedestals. In Winter 2022, the masses came together to erect a pedestal for a new anime, one that came out of left field and hit us like, well, a high school girl falling headfirst into a desk. Of course, I am talking about My Dress-Up Darling, a rom-com that brought more smiles to faces than any other anime this past Winter season!

Based on the manga by Shinichi Fukuda, My Dress-Up Darling puts its focus on Wakana Gojo (Shōya Ishige), a nervous high schooler with a passion for making Hina dolls. Criticized for his love at a young age, Gojo kept himself closed off from the rest of his classmates, in fear of being ridiculed again. That’s when the extroverted Marin Kitagawa (Hina Sugita) literally falls on his desk, and into his life. When she discovers Gojo’s passion, Marin reveals that she herself has a similar interest: making cosplay. 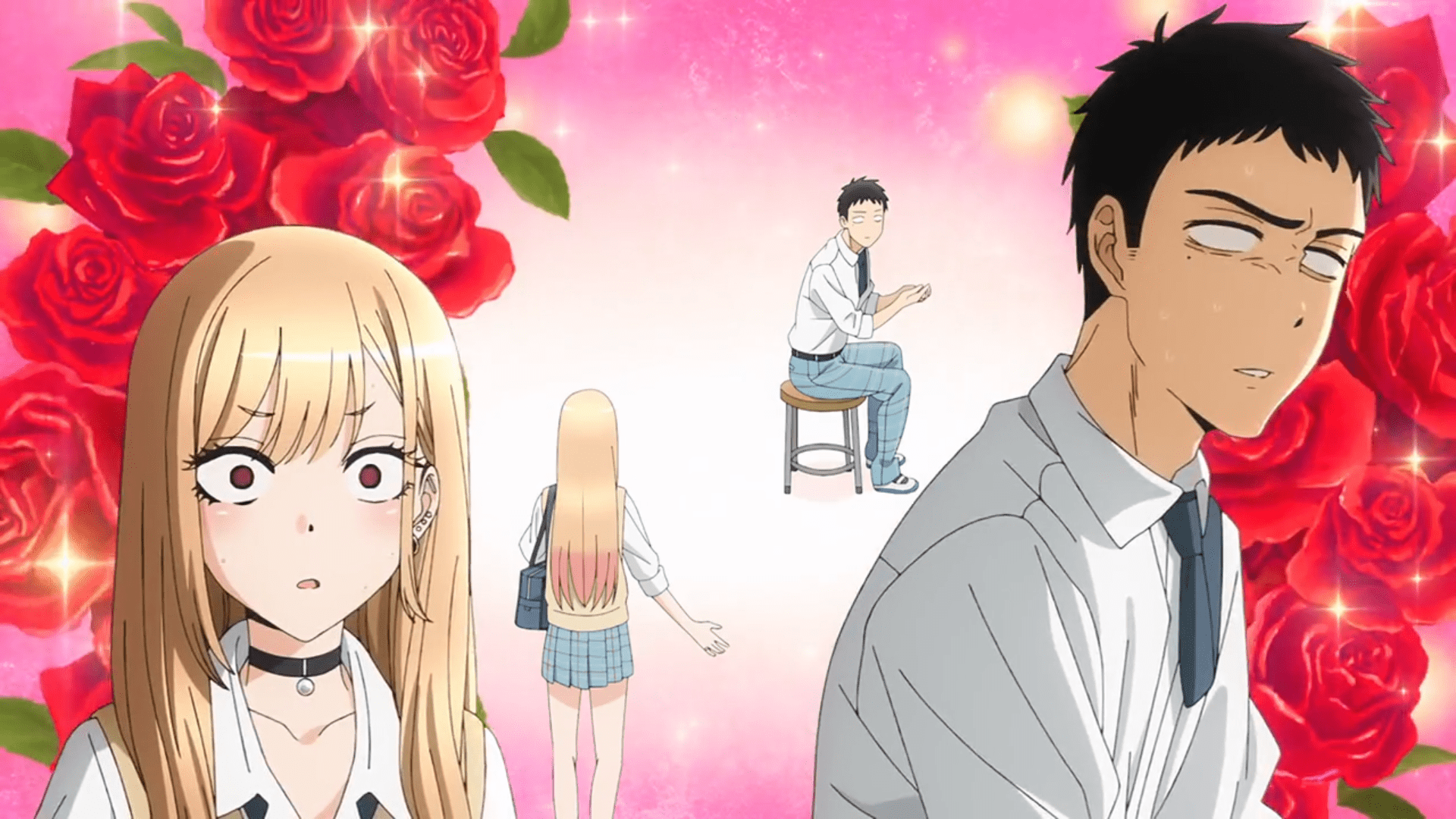 However, it turns out Marin isn’t good at all when it comes to making cosplay, a fact that Gojo mentions bluntly. Thankfully, the Hina doll maker finds a solution to her problem: he’ll make Marin’s costumes, which will help him better his skills at making doll clothing. Thus the two begin their collaboration, as Marin shows Gojo the characters from her favorite games, anime, and eroge that she wishes to dress as. But as the two grow closer, another kind of passion starts to blossom.

Right off the bat, My Dress-Up Darling does a great job with showcasing the love of one’s hobbies and passions. As Gojo’s craft can be seen as feminine to most, it’s understandable why he shut himself off from the rest of his schoolmates. But all it takes is a few words from Marin to pull Gojo out of the shadows, and to embrace the things he loves. The moment that she tell him it’s okay to enjoy his hobbies and crafts, this anime transforms into something special. 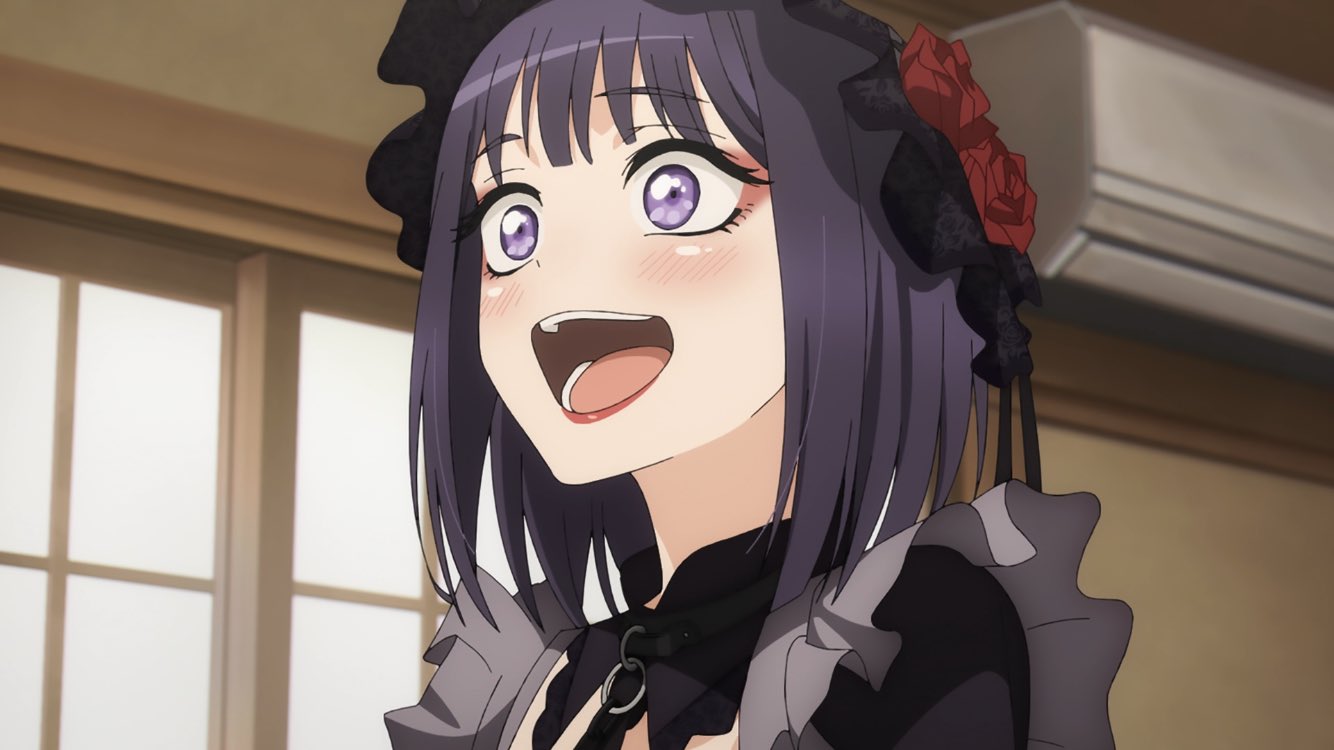 As a character, Marin is one-of-a-kind. Anime has showcased many a beautiful woman, as well as ones that embrace their loves, passions, and show off plenty of emotional intelligence. Marin is all of these things, and while they say that the “ideal woman” might not exist in real-life, she does share a lot in common with many real-life female cosplayers. (I can personally name dozens of friends who fit the same bill as Marin, thanks to their kindness, beauty, and nerdiness.)

But Marin isn’t Marin without Gojo, who goes from cocooning himself with his loves to emerging like a beautiful butterfly that proudly shows off his craft. It takes some time, and it helps that Marin’s there to give him a helping hand whenever he needs to. Gojo also returns the gesture, not just with helping with cosplay stuff, but also when it comes to boosting her confidence and aiding in dire costume-related situations. And it’s how these two lend each other their shoulders that helps to bloom something more than a mere collaboration. 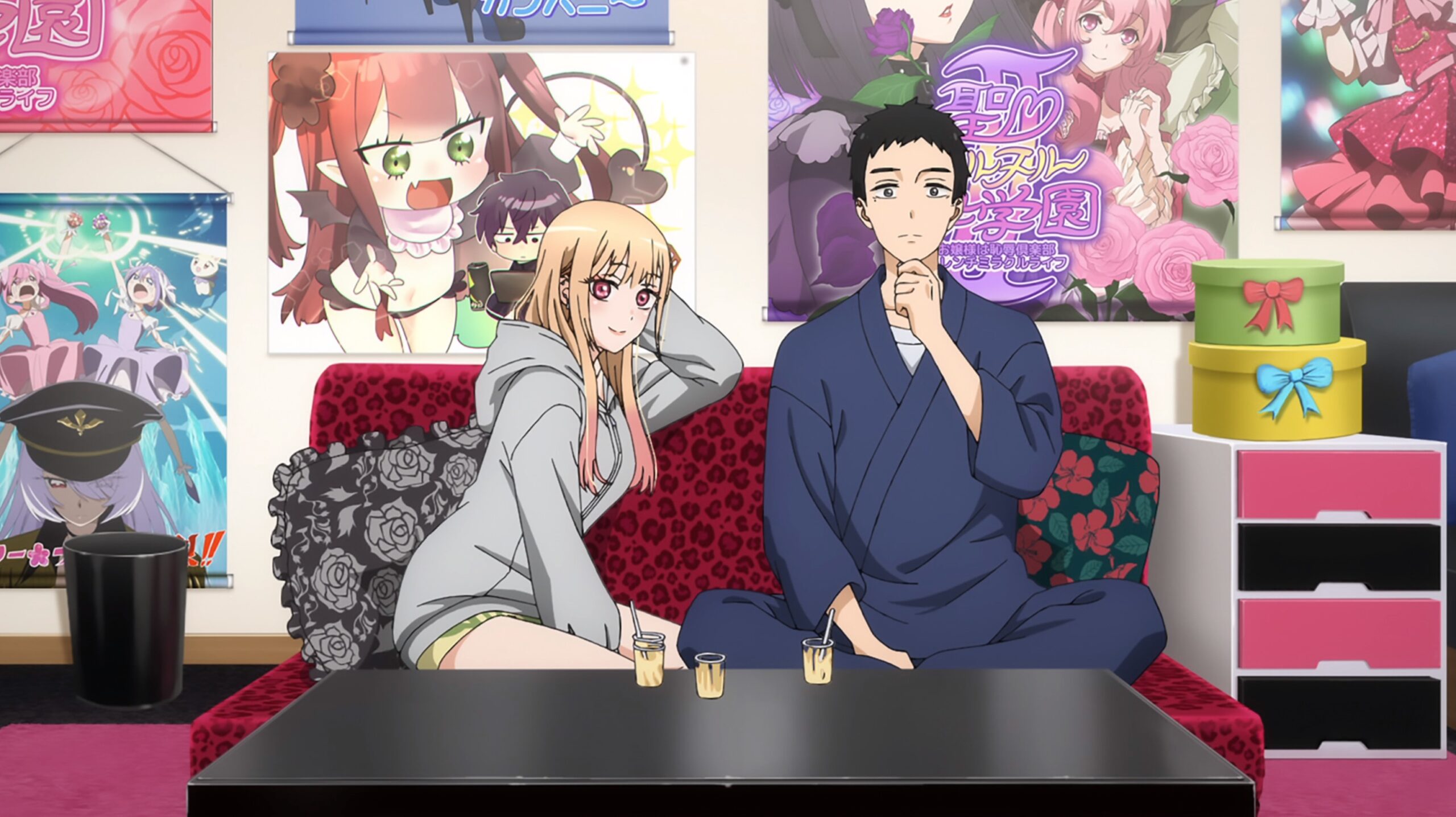 Surprisingly, it’s Marin that starts to have feelings for Gojo first! Sure, he’s uber-nervous while getting her measurements, and he knows just how beautiful Marin is. (Hell, he even has a wet dream about her in Episode Three!) But the way he’s sheltered himself has led him to think that Marin would be out of his league. So when it’s her that starts to fall in love with him, it takes My Dress-Up Darling to a whole new level of sweetness.

Of course, the art of cosplay takes the biggest focus in this show, and how the craft is presented is surprisingly down-to-earth. From getting the proper fabric and extras to making, yes, the right-sized boob bag to match the character, every ounce of detail that goes into making an outfit is shown with much tender, love, and care. One thing that My Dress-Up Darling does great too is show the importance of clear communication, as Marin’s poor wording makes Gojo work near-sleepless nights to make her first outfit in time. It’s a moment where Marin is riddled with guilt, as she vows to be as coherent with her words as possible. 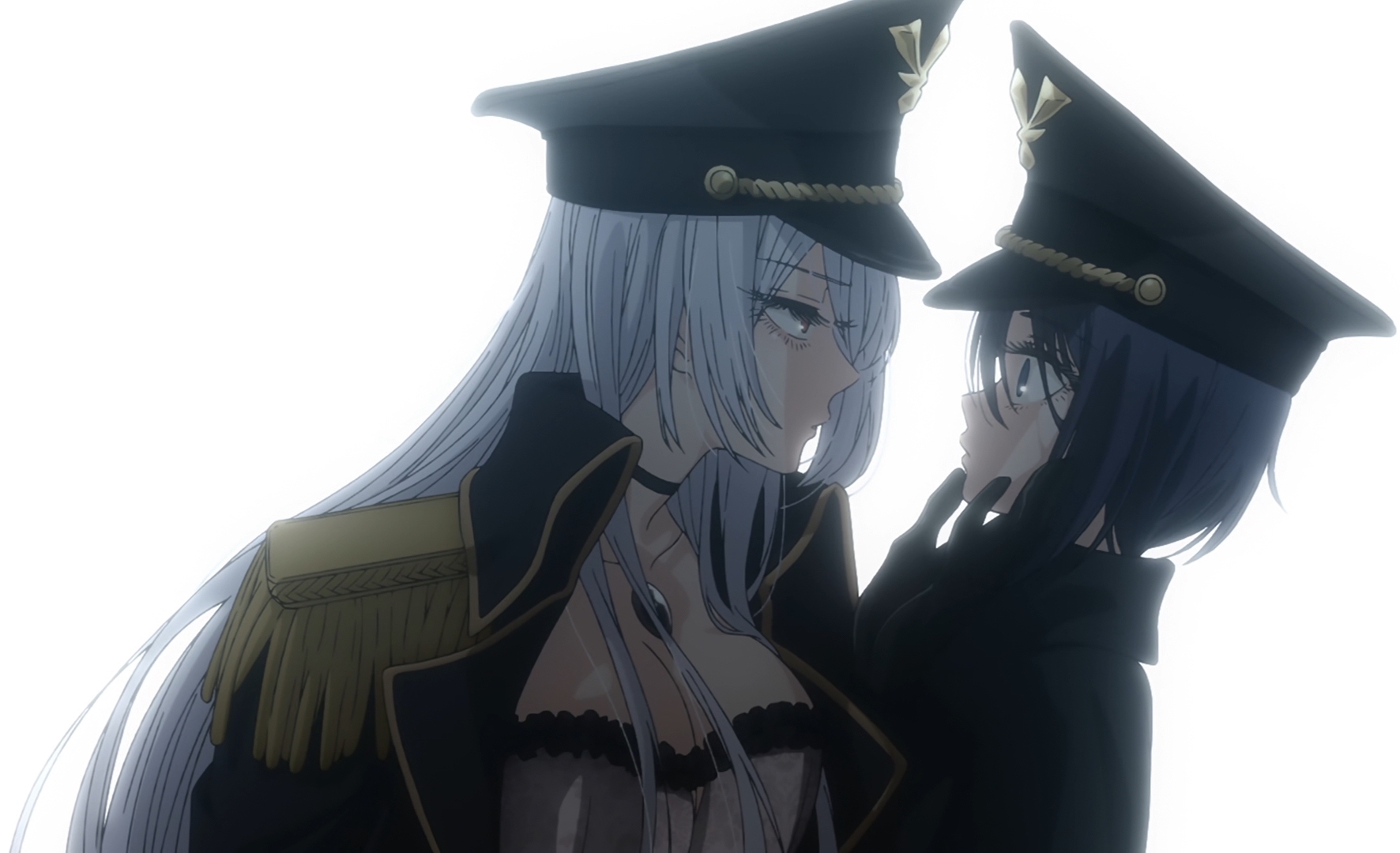 However, all of that exhaustion disappears from Gojo when he sees Marin in her Shizuoka outfit for the first time. The joy in both of their faces, the excitement in their body language, and even the way their eyes glisten with happiness demonstrates the gratefulness of hard work paying off. It’s a moment that shows studio CloverWorks (Akebi’s Sailor Uniform) at the top of their game, as the way their emotions are drawn are some of the most endearing and rose-tinted visuals one will possibly see this year.

The passion for cosplay grows more with the additions of Sajuna “Juju” Inui (Atsumi Tanezaki) and her younger sister Shinju (Hina Yomiya). At first, Juju seems hesitant to work alongside Marin, but her wanting of Gojo’s cosplay-making talents pushes her to give it a try. Shinju also wishes to participate in cosplay, not just be stuck behind the camera. And thanks to both the hard work of Gojo and the energy of Marin, the sisters not just get to live out their dreams of dressing as their favorite characters, but also find new ways to enjoy their favorite hobby. 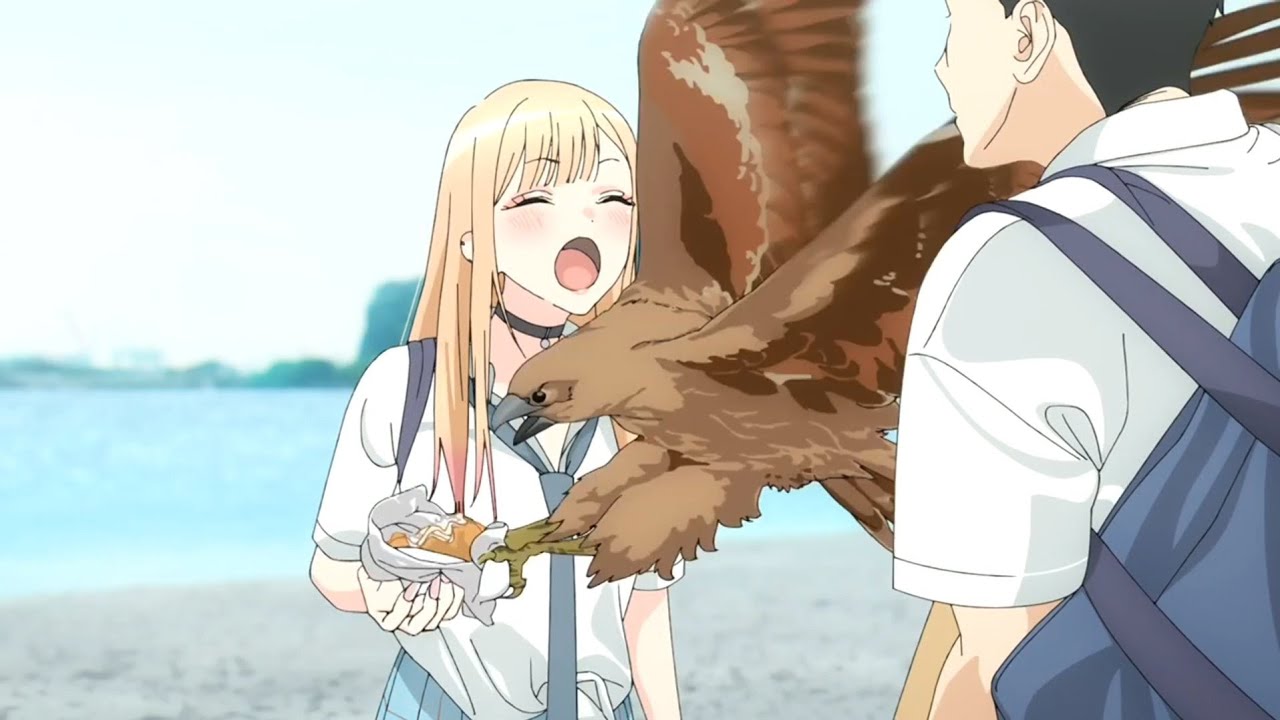 One can’t have a rom-com without the comedy, and My Dress-Up Darling also does that pretty damn well! Marin’s love for eroge, Gojo being flustered by the cosplayer’s near-nude body, Juju’s expression when Gojo accidentally walks in on her sans pants, and Gojo’s grandpa (Atsushi Ono) reacting to finding lady’s tights in his home are presented with side-splitting hilarity. One comedic highlight involves Gojo and Marin going to a love hotel for a cosplay shoot, with both getting lost in the art of photography. But when they see the positions they wind up being in — along with the naughty sounds happening next door — well, a reality check gets cashed in quicker than a high-paying lottery ticket! 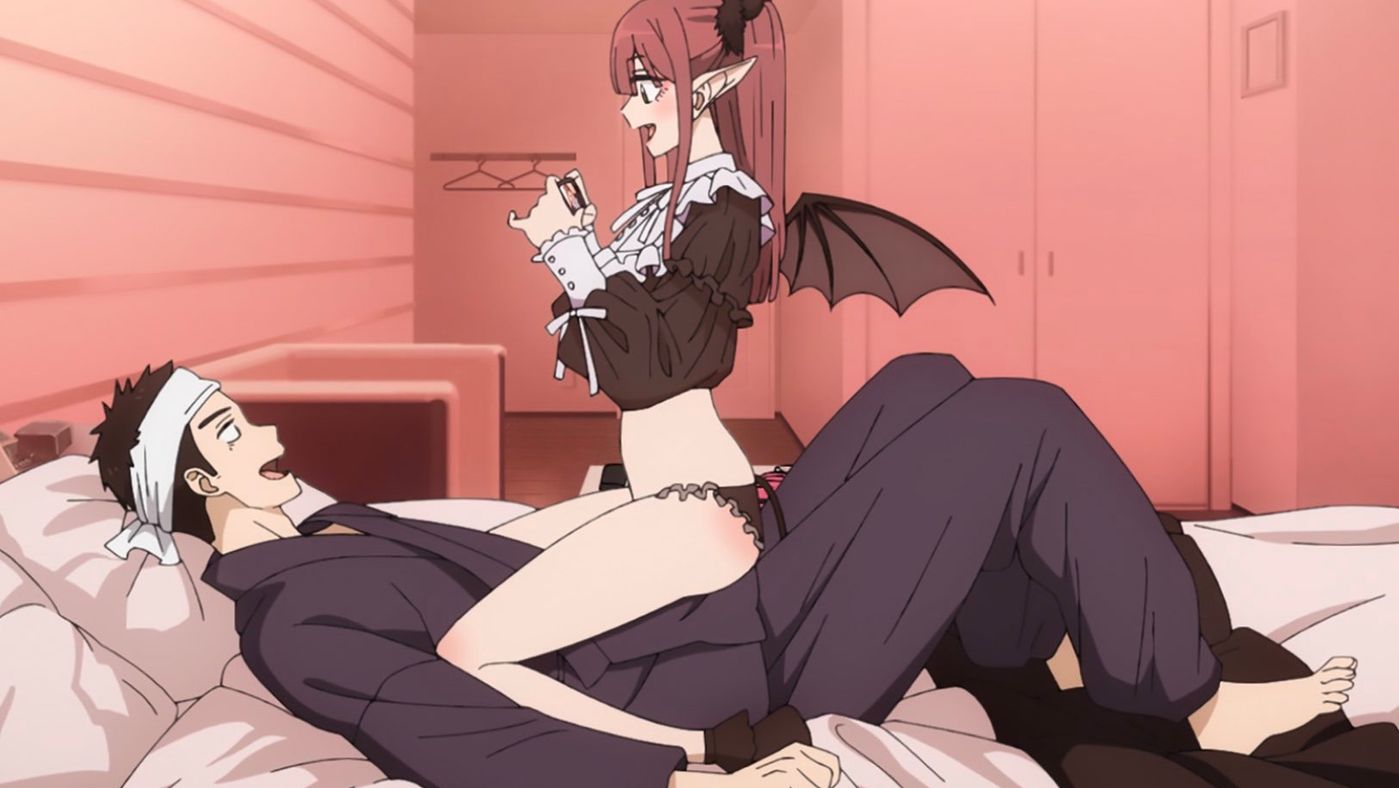 The voice cast demonstrates this strongly, with Suguta’s Marin bringing passion, confidence, and random vocal sounds whenever she’s feeling the love in her interpretation. Ishige does Gojo perfectly, thanks to his shy and nervous tones whenever he’s either placed in a promiscuous situation or when he wants to speak up about something. Tanezaki and Yomiya play the Inui sisters strongly, acting as terrific polar opposites when it comes to confidence, stamina, and height. Although he’s not in there a lot, Ono’s portrayal of Gojo’s grandpa brings some of the best laugh-out-loud moments, especially when he catches his grandson doing, well, certain things.

Composed by Takeshi Nakatsuka (Magical Girl Ore), the soundtrack brings both comedic and beautiful moments to greater heights. When the show puts the focus on the cosplay elements, Nakatsuka’s compositions deliver some truly breathtaking sounds. Opening theme “San San Days” by Spira Spica is an exciting track that captures the extroverted attitude of Marin, who drags Gojo into the light and straight towards fun times. Closer “Koi no Yukue” by Akari Akase is one of the most adorable theme songs around, with a sound that feels like a lost 80s classic meshed with the cutest vocals around!

What else more can one say about My Dress-Up Darling? Its story, characters, animation, and soundtrack are all phenomenal. While it may take another couple of seasons before we can decide if it’s the greatest rom-com ever made (a title currently held by Teasing Master Takagi-san, thanks to its pitch-perfect third season!), these twelve episodes with Marin and Gojo have been nothing short of flawless! Whether you’re a cosplayer, a hobbyist, or someone trying to find a place in this big world of ours, My Dress-Up Darling will speak to you in ways no other anime ever has.

Also, can they make SuccIDK a legit four-panel manga? I would read the crap out of that!