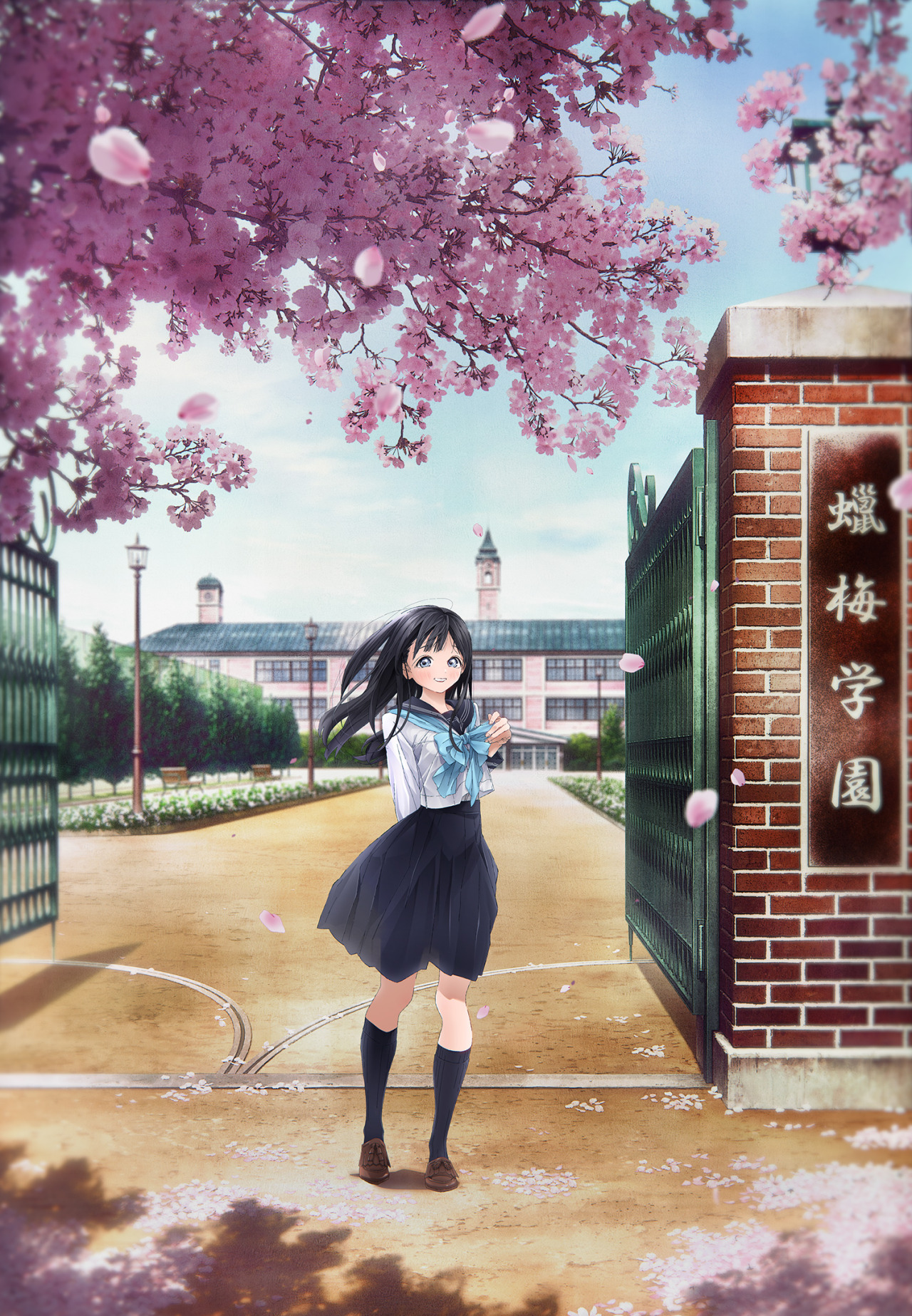 There are anime series that are just simply a marvel to look at. When it comes to the best-looking, one just needs to look at the slice-of-life and iyashikei genre for some of the most gorgeous series ever to be put to paper. Shows like Non Non Biyori, Laid-Back Camp, and Flying Witch relish on placing anime characters into breathtaking scenery, to the point where the worlds sometimes outshine the people we’re watching. CloverWorks (Rascal Does Not Dream of Bunny Girl Senpai) takes that artistic vibe into consideration with their latest series — and one of three shows of theirs airing Winter 2022 — Akebi’s Sailor Uniform. Only here, it’s both the characters and their world that shine like nobody’s business!

Based on the manga series by Hiro, Akebi’s Sailor Uniform follows Komichi (Manatsu Murakami/Megan Shipman) as she experiences middle school. Her dream was to go to Roubai Academy and wear their prestigious sailor-styled school uniform. After her mother Yuwa (Kana Hanazawa/Erica Schroeder) hand-makes the uniform, Komichi is shocked to find that the outfit has changed since her mother’s time. Fortunately, the school okays her outfit, as it’s still technically the original design. With that off of her shoulders, Komichi then sets out to have a great middle school experience and make hundreds of friends. 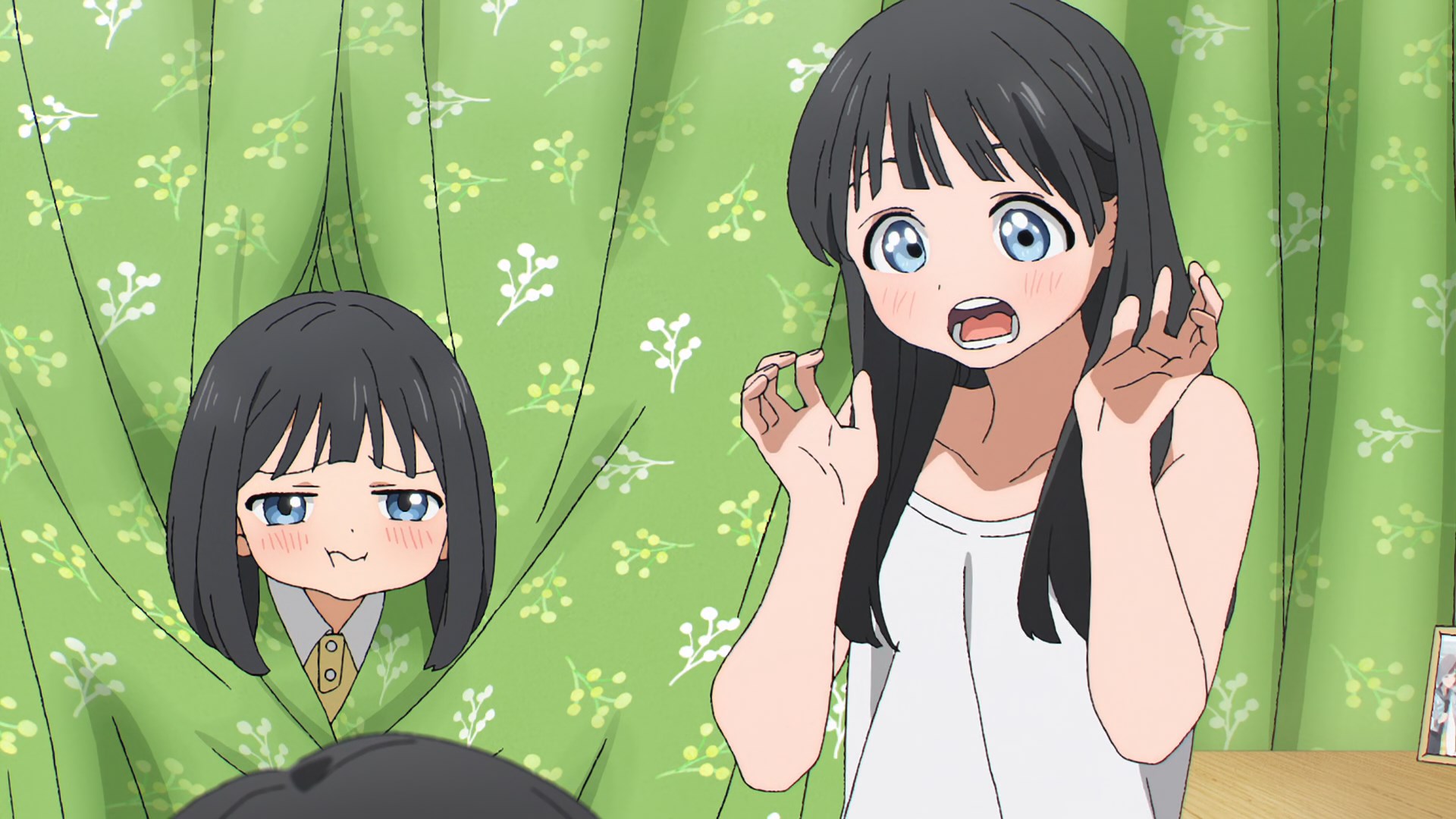 Upon entering class, Komichi finds herself already in the presence of friends-in-the-making. From the shy-yet-active Erika (Sora Amamiya/Susie Yeung) and the photo-savvy Tanigawa (Akira Sekine/Madeleine Morris) to the music-loving Oshizu (Mitsuho Kambe), every student of Roubai Academy is seeking to find their true passion. And it’s the passion and positivity that flows through Komichi that may help many of them achieve their goals.

One of the key themes of Akebi’s Sailor Uniform is the concept of finding one’s self. Once Komichi puts on that sailor uniform for the first time, her confidence blossoms in a way that affects every classmate she crosses paths with. With middle school being that gateway between childhood and one’s future, it becomes apparent that there’s some worriment regarding how these classmates are trying to present themselves. But thanks to Komichi’s can-do attitude, her classmates manage to embrace their youth while paving the way for their future self. 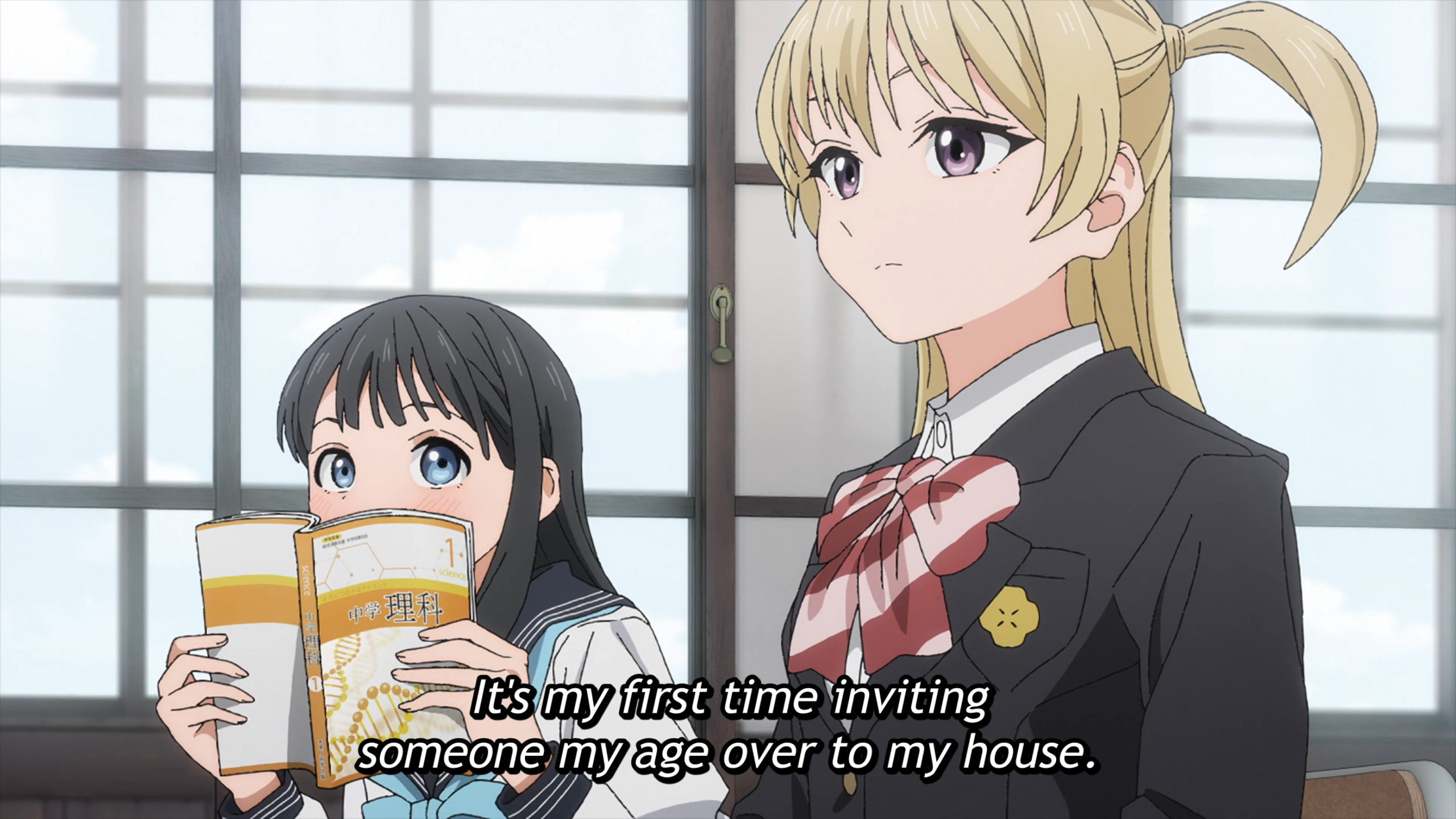 It’s also clear that these students have their own quirks in life. Erika’s nail-clipping when she’s nervous, Ohkuma’s (Konomi Kohara/Brittney Karbowski) need to observe people everyone and everything, and Tanigawa’s troubles with her body image are ones that not only stand out the most, but feel the most relatable for women of these characters’ age. Fortunately, it’s Komichi that’s the most quirky of everyone, with her owning every energetic and weird thing she does with pride. Thanks to her personality, the other students not only find a way to break through their quirks, they also find themselves becoming closer as friends.

Like more slice-of-life anime where not much goes on, it’s tough to really talk about Akebi’s Sailor Uniform’s narrative. To be blunt, there isn’t really a story that happens throughout the show. But despite the lack of plot, the underlying theme of growth and overcoming flaws helps make this a worthwhile watch. After all, no matter what gender you are, we all experienced very similar feelings as young students in the same way Komichi and her classmates did. And it demonstrates finding the good within those flaws with flying colors! 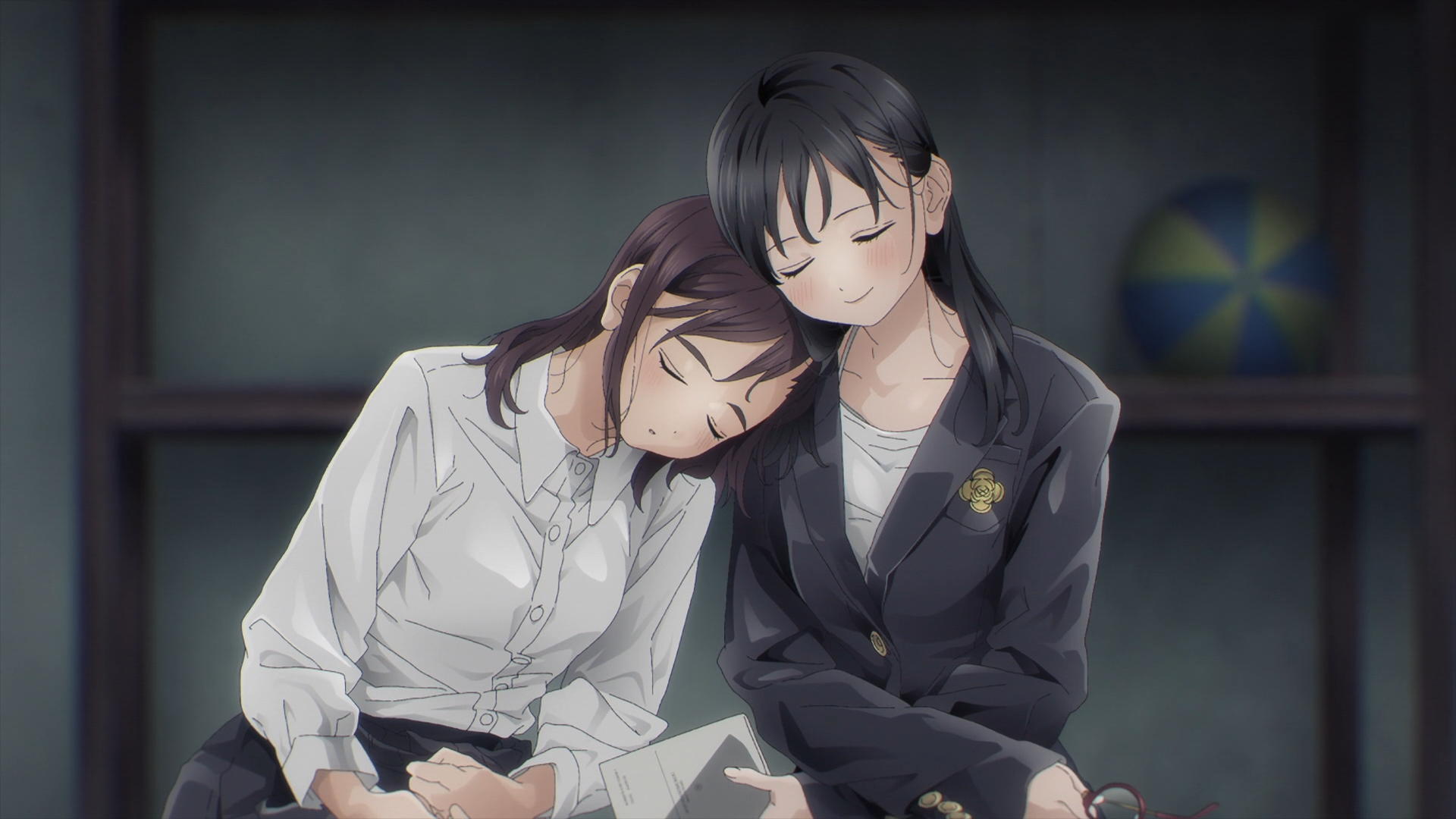 Both the Japanese and English dubs do a phenomenal job with presenting these characters emotions and personalities. Komichi’s bubbly persona are showcased with glee by both Murakami and Shipman. Amamiya and Yeung demonstrate the caring-yet-worrisome attitude of Erika in a way that makes her feel like the Everywoman of the show. Both Sekine and Morris bring a self-conscious attitude to Tanigawa, one that demonstrates a humorous feeling of embarrassment after she does something a little, well, risqué.

Of course, it’s not just the voice cast that brings Akebi’s Sailor Uniform to life. There are not enough words to describe how radiant CloverWorks’s animation is in this series. The character animation sometimes feel rotoscoped, with their fluidity capturing every tiny aspect of their movement. From the way Komichi imitates her favorite idol singer to even how someone might fix their hair, every frame captures a new level of beauty that stands out from anything else airing right now. 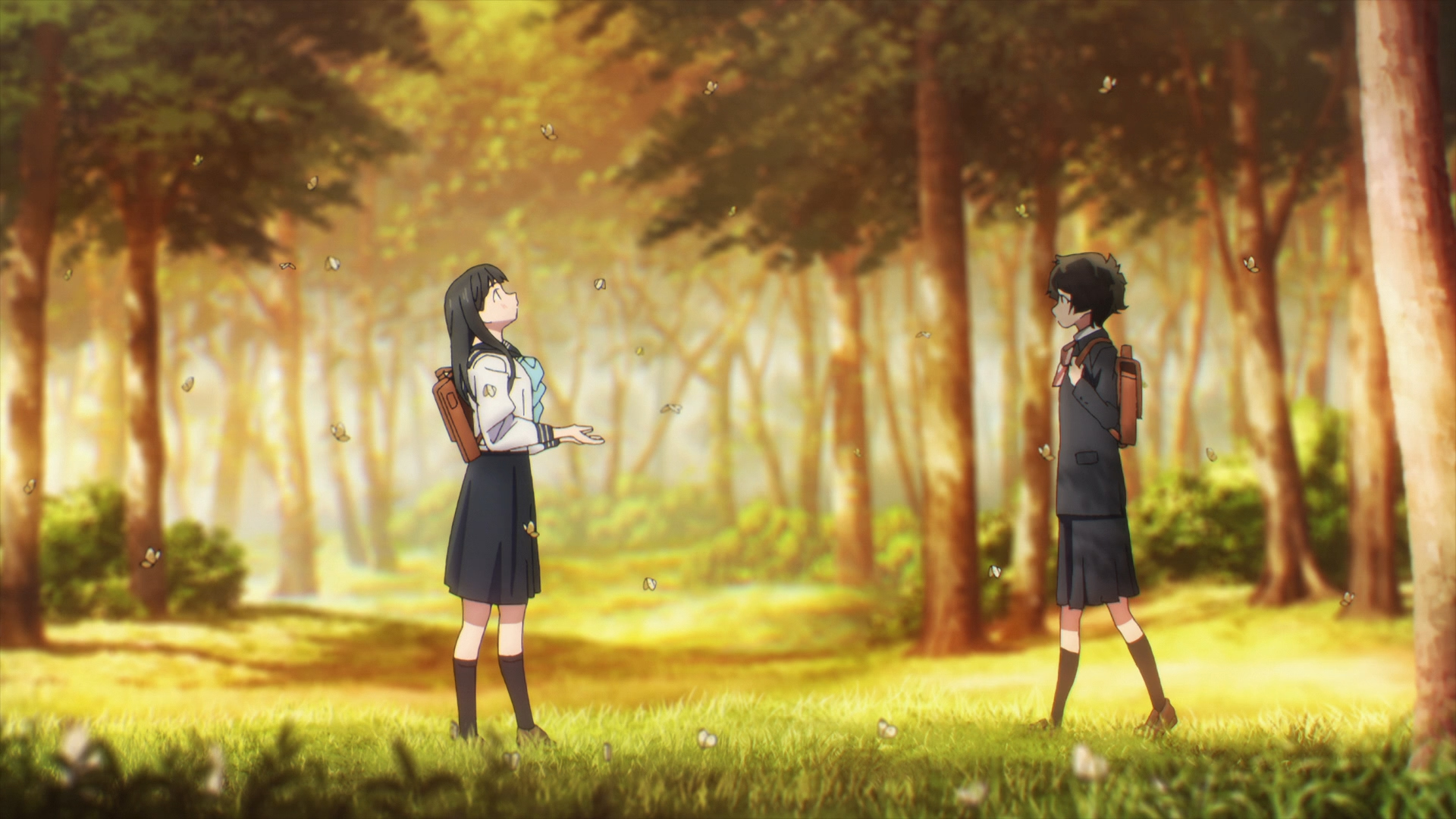 Then there is the scenery itself. Every place that Komichi roams through is truly magnificent to look at. The cherry-blossomed forests, a rainy day on campus, how the sun breaks through the clouds, and even the aging of weather-damaged buildings are brought to phenomenal levels of detail. Wildlife like frogs, birds, and snakes are also presented with uncanny lifelike imagery. It practically reaches movie-level quality, to the point where it’s almost criminal that this show looks as dazzling as it does.

Perhaps the most overlooked thing about the show is its soundtrack, composed by Kana Utakane (Mieurko-chan). While the string arrangements are gorgeous to hear, it’s her more silent film-like piano solos that bring forth a pitch-perfect backing to the characters and their settings. Opening theme “Hajimari no Setsuna” by the 16 main student characters and the closer “Baton” by Murakami showcase youthful energy that fits perfectly with the tone and attitude of the series as a whole.

Akebi’s Sailor Uniform may not be the most exciting anime of Winter 2022, but nothing else this season can compare to its beauty. The story of classmates finding their purpose and passions is something that will be relatable to any person who had their awkward phrases in school life. But even if you weren’t the shy or weird kid in class, you cannot deny the feel-good wonder and gorgeousness that comes packaged into every episode of Akebi’s Sailor Uniform.

Akebi’s Sailor Uniform can be viewed on Crunchyroll, VRV, and Funimation. It has been licensed by Funimation. Episodes 1-9 were observed for review. Promotional consideration provided by Ellation and Funimation.