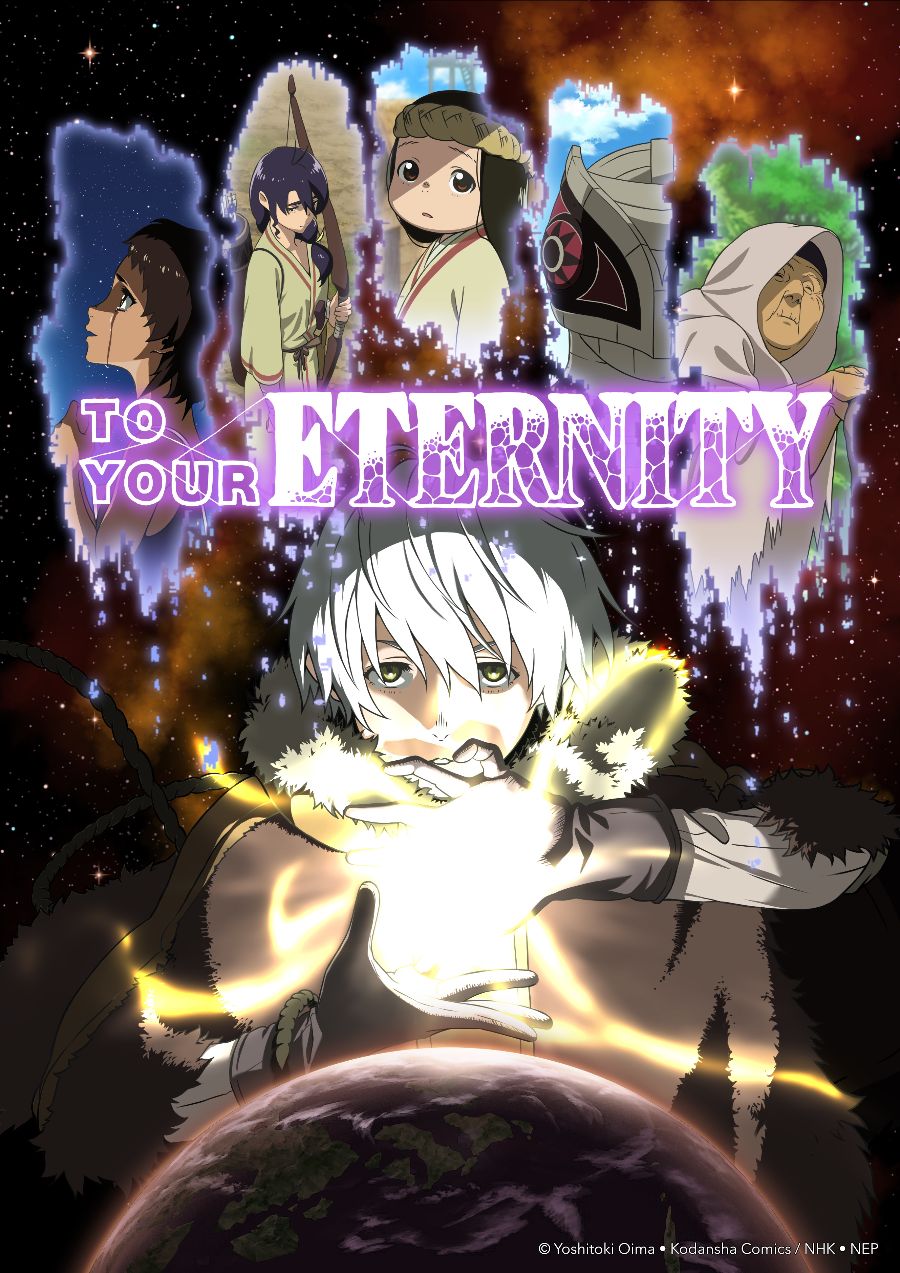 In the beginning, the Beholder (Kenjiro Tsuda) drops a white orb. It’s not much at first, but after thousands of years, it starts to take the shape of a rock. That rock then transforms into a wolf, replacing the one that laid dying on its surface. Thus begins the adventure of the being known as Fushi (Reiji Kawashima), the protagonist of To Your Eternity.

Soon he finds the owner of the wolf, known here simply as The Boy. After his death, he finds himself transforming into the human, continuing on with the journey. Fushi learns the ways of life, sometimes in the toughest of ways. Fortunately, thanks to his immortality, he can take as many hits as he wants. And this power of his comes in handy when it comes time to protect the people that enter his life. A young sacrificial lamb named March (Rie Hikisaka), the elderly Pioran (Rikako Aikawa), the deformed Gugu (Ryoko Shiraishi/Taku Yashiro), and the outcast Tonari (Eri Inagawa) show Fushi new and interesting ways of looking at the world. 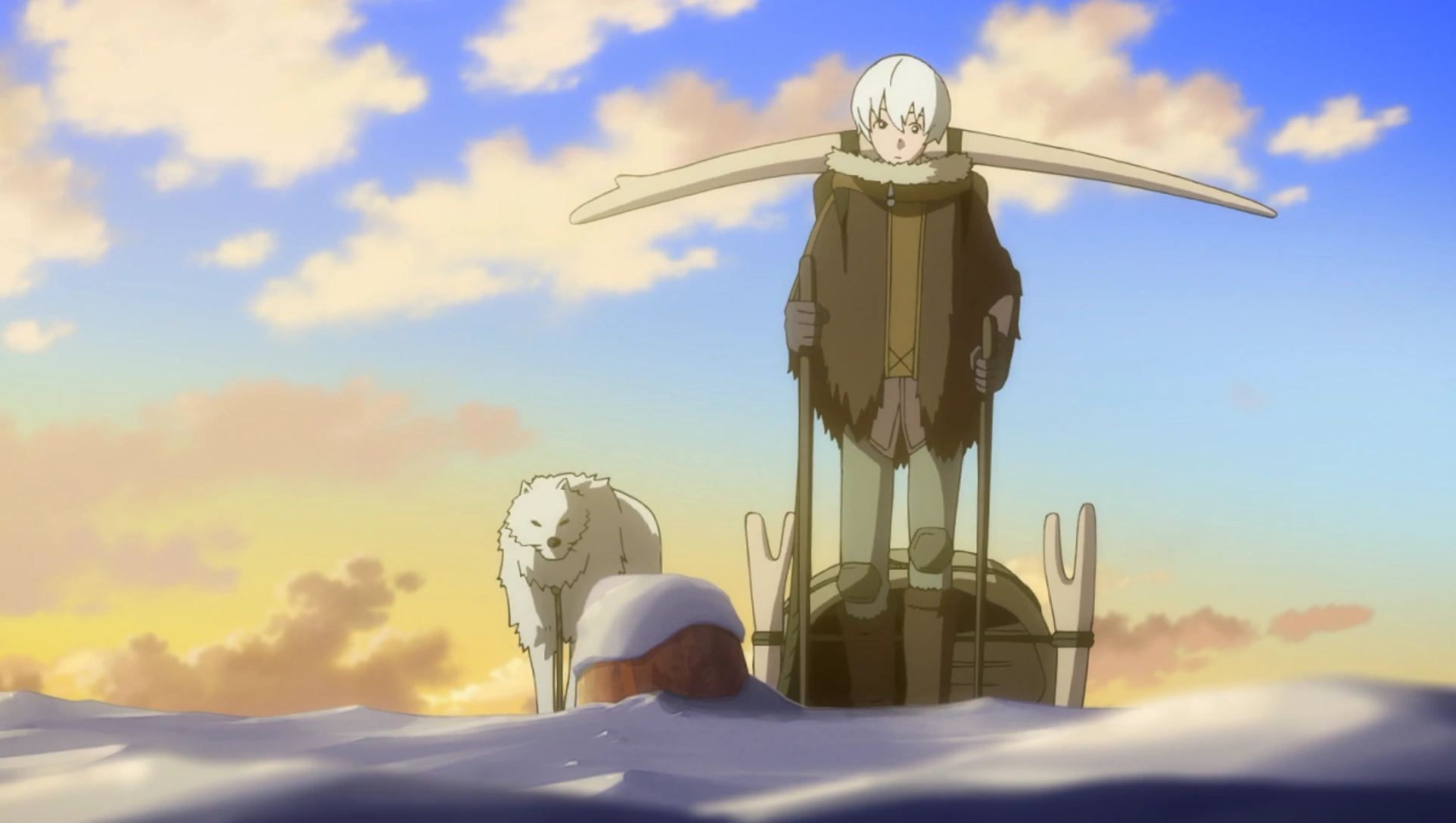 However, no matter how much joy is brought to Fushi, almost every meeting is met with danger and tragedy. Following Fushi are creatures known as Nokkers, who attempt to steal his powers and cause harm to those who stand by him. There’s also Hayase (Mitsuki Saiga), who becomes obsessed with Fushi’s powers and skills. As these threats appear, Fushi begins to weigh the options of staying with his friends or staying far away from them for their own safety.

To Your Eternity is a very heavy show, as it comes from A Silent Voice creator Yoshitoki Oima. There’s plenty of deep emotion on display from Fushi and the rest of the characters. One moment, you are laughing with March as she plays with her favorite dolls; the next, your heart aches when she’s sent off to be a sacrifice for a mythical beast. That heartache will stay with you all the way through its first season, as even the funnier moments are singed by the darker parts. 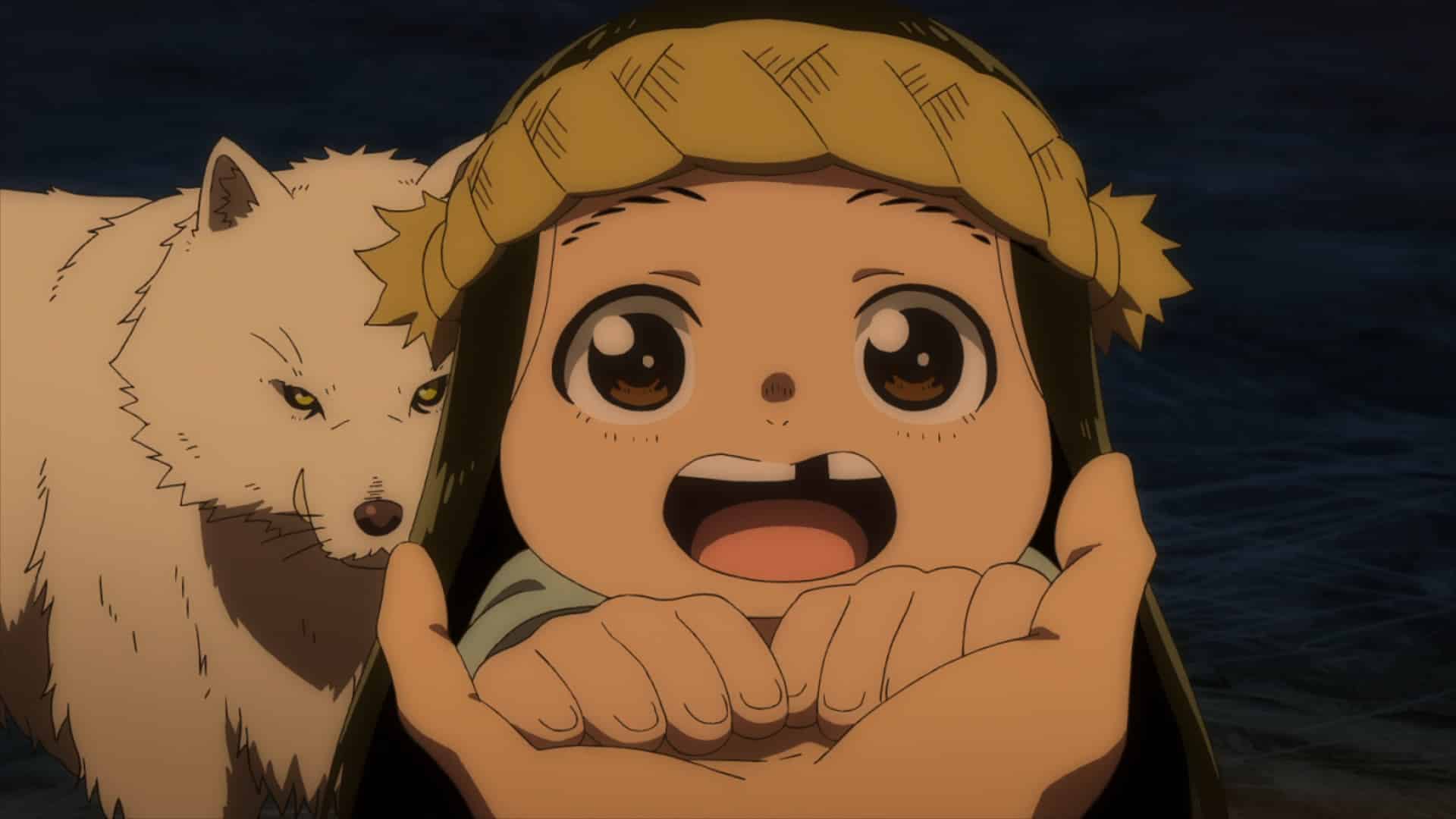 As you watch, it often hints at the theme of mortality. The death of the wolf, The Boy, and the people that shape the kind of person Fushi transforms into play key roles into how our protagonist sees the world. No matter what he does, he cannot save everyone whose paths he crosses. To Your Eternity pushes the idea that living forever is its own curse, as one is forced to witness every person he cares most for perish due to the ways of human nature.

But there’s no harm in trying, which is why he’s able to use his powers all for good. Cute and helpful tricks like making food and weaponry come in handy for those around him. However, transforming into every person and creature that’s passed on gives Fushi the upper hand when battling Nokkers. Despite his peaceful mannerisms, Fushi knows how to put up a good fight, which also inspires others to draw up their weapons to help him when he needs it. 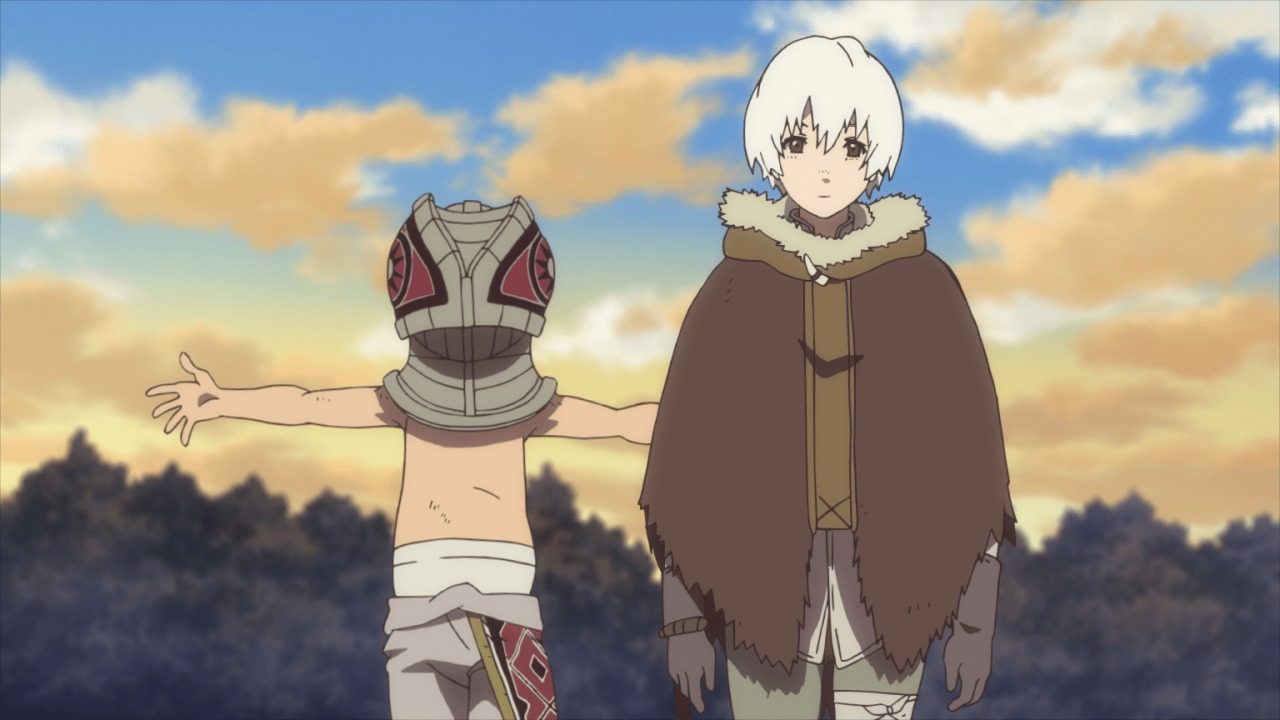 One of the aspects of To Your Eternity that stands out the most is how Fushi grows as a person. Going from rock and wolf to person, he soon finds himself developing speech like a toddler would. There’s also his evolution of his worldly perception, which the likes of March, Gugu, and Pioran help him with throughout the years. With the understanding of good and evil fully in his grasp, Fushi becomes a symbol of hope and perseverance in a world that — while beautiful — is very cruel.

For the most part, this adaptation of Oima’s manga demonstrates these elements wonderfully. Scriptwriter Shinzo Fujita does the source material justice when it comes to the opening episode, along with the March and Gugu arcs. Only when it gets to Tonari’s story do we see the narrative struggle to gain traction. It has some strong moments, but there are parts that wobble in the ways that the other arcs easily ran through. (The first season’s finale, on the other hand, brings back the heart, sadness, and even humor that Tonari’s story was lacking.) 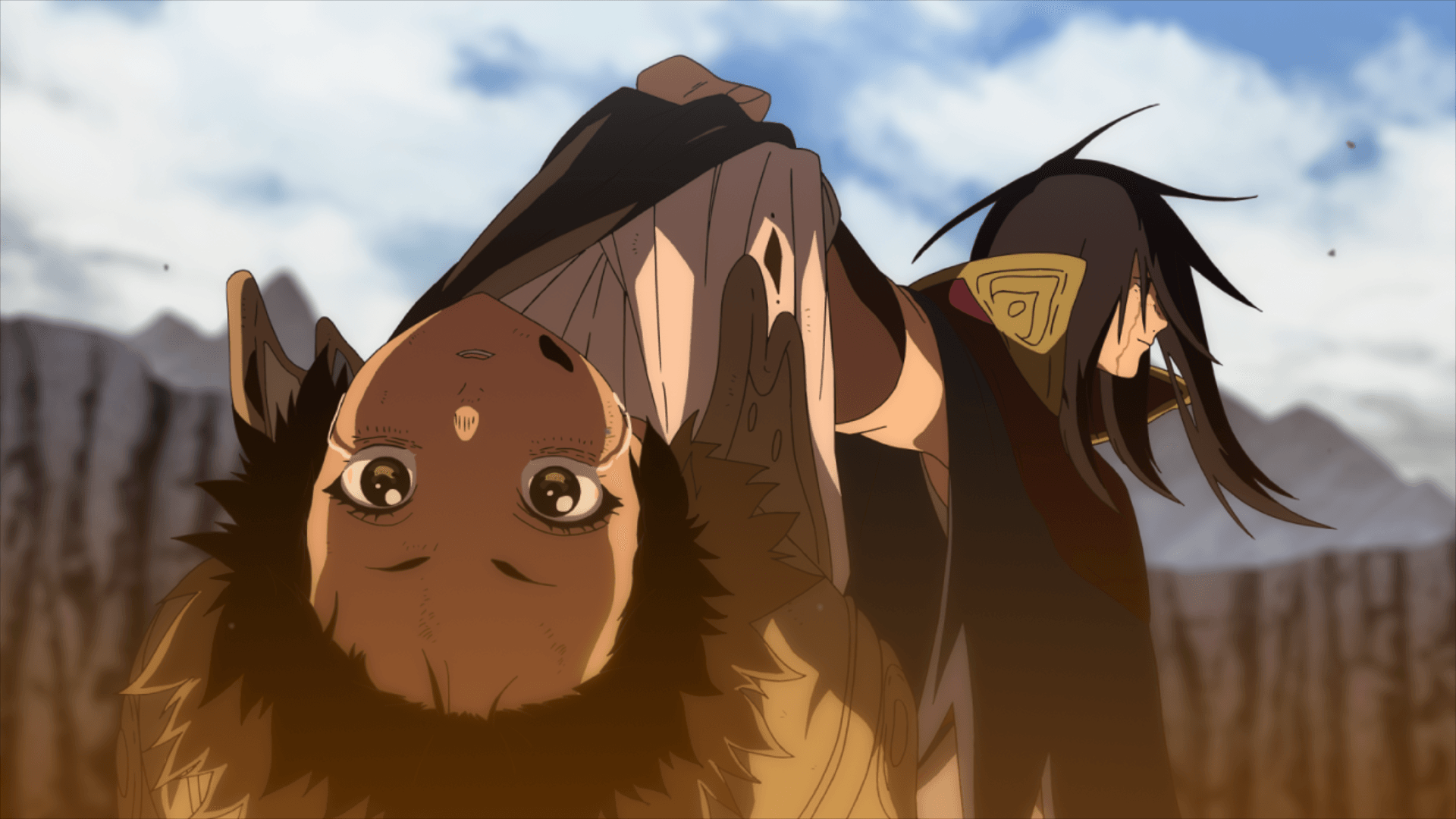 It’s in the voice acting from the original Japanese cast where To Your Eternity’s spirit is present. Kawashima literally helps Fushi evolve from babbling being to the strong and caring person he ends up becoming by season’s end. Tsuda is ominous and somber as The Beholder, acting as a character one can’t tell they should love or hate. As Pioran, Aikawa delivers a performance that’s often funny, but knows when to push the heartbreaking moments with perfection.

Alas, what is hit-and-miss in this adaptation is its animation. Brain’s Base (Anonymous Noise, School Babysitters) is far better when it comes to comedies or slow dramas. In these moments, the series shines, demonstrating a strong knack for facial expressions and soul-crushing tragedies. However, the fight scenes can be sluggish at times, and the animation takes a noticeable dip in quality during the Tonari arc. Thankfully, it does redeem itself in the show’s finale, giving hope that this quality will continue onward for next year’s second season. 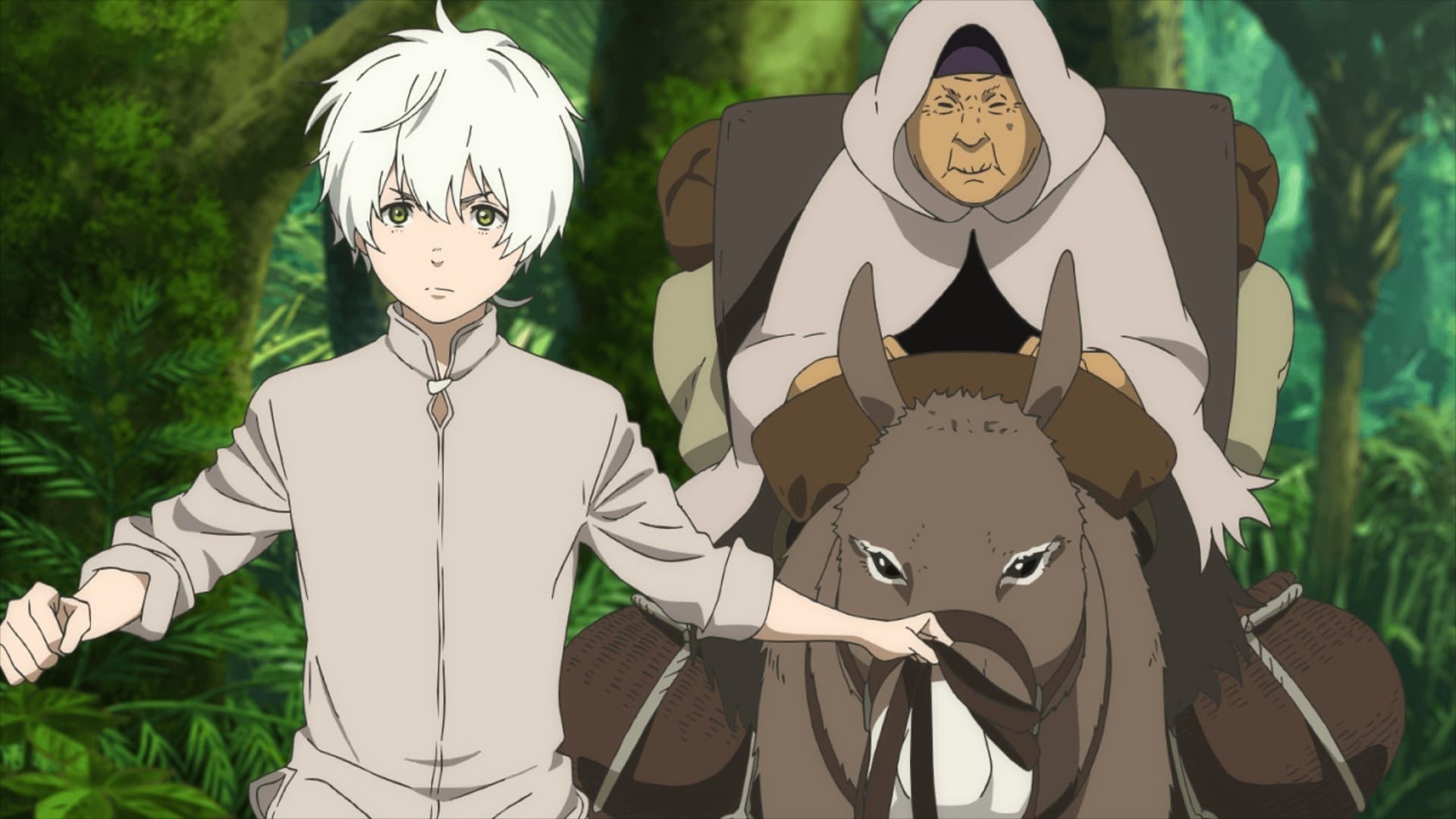 What’s certainly powerful is its soundtrack, penned by Ryo Kawasaki (Bakumatsu, Fate/Grand Order). Every moment of sadness, laughter, and nail-biting action is given an extra breath of life thanks to the melodies he creates. You also cannot pick a more perfect singer than Hikaru Utada, whose opening theme “Pink Blood” is as beautiful as it is spiritually healing. Masashi Hamauzu’s instrumental “Mediator” ends each episode with a haunting sound, one that captures the sounds of days of old in a audible time capsule.

There are a lot more high notes than low ones in To Your Eternity. Like life, it has its rough patches, but they do give way to some of the most memorable storytelling of the year. It may not make you sob uncontrollably like A Silent Voice did, but To Your Eternity does a great job delivering tons of emotion and memorable moments that’ll stay with you long after the credits have rolled.

To Your Eternity can be viewed on Crunchyroll and VRV. Episodes 1-20 were observed for this review. Promotional consideration provided by Ellation.