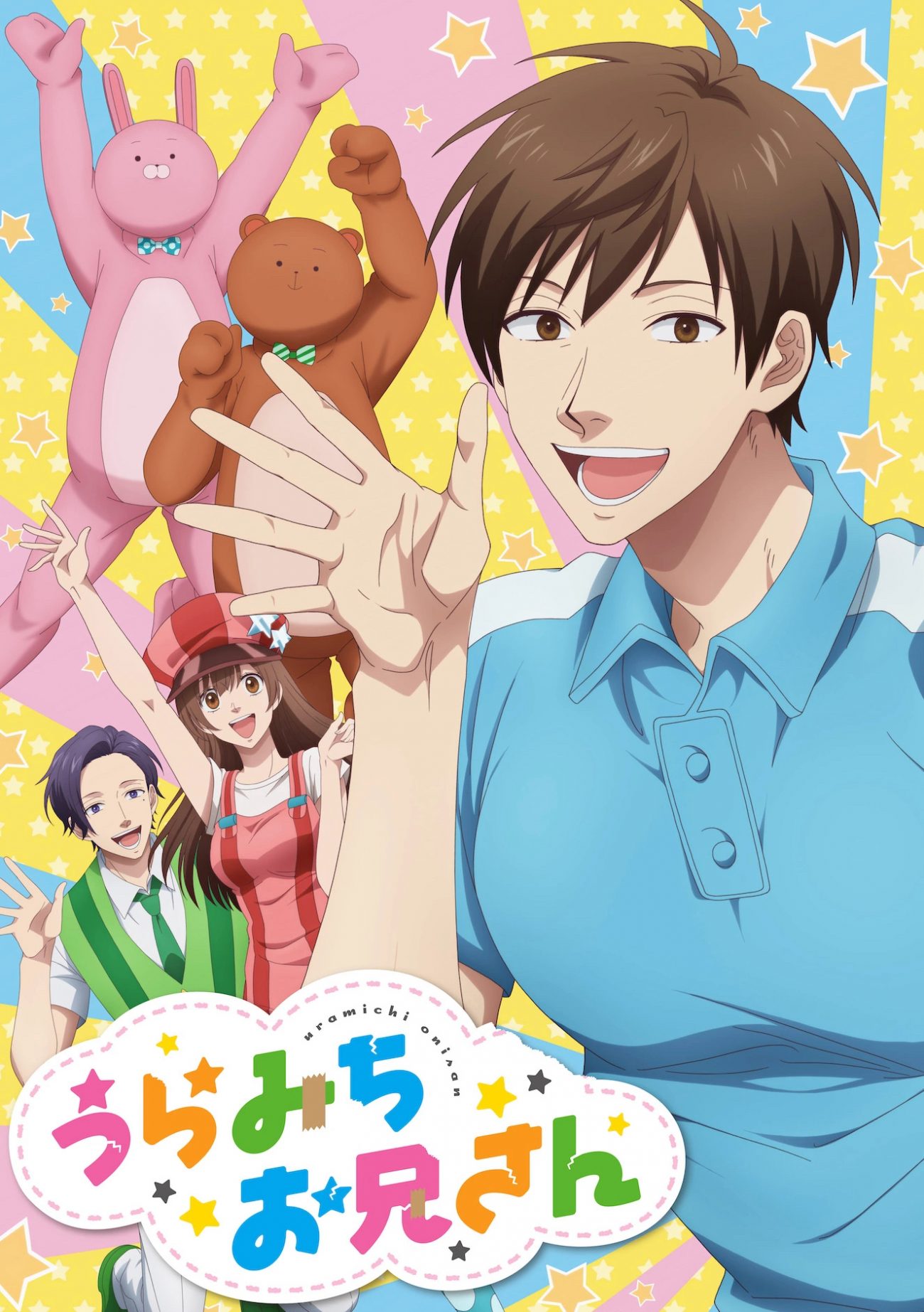 One can imagine how hard it is to be a children’s entertainer. They have to keep a happy personality almost all of the time, to the point where their TV persona overtakes their real-life one. But what happens if their true self starts to crack open from behind the facade? And what if the cameras are rolling when it happens? Life Lessons with Uramichi Oniisan showcases such a dilemma with gut-punch of relatability, while at the same time delivering a nonstop tickling of side-aching laughs.

Based on the manga by Gaku Kuze, the series follows the titular character (Hiroshi Kamiya), who serves as the exercise segment leader of the children’s show Together with Maman. At first, he looks super happy to be teaching these kids about being in good health. However, as the recordings go on, his mentally unstable self peers through, to the silent shock of the children in the student. Yet despite his often depressing outlook on life, Uramichi continues to be a popular personality for kids and adults. 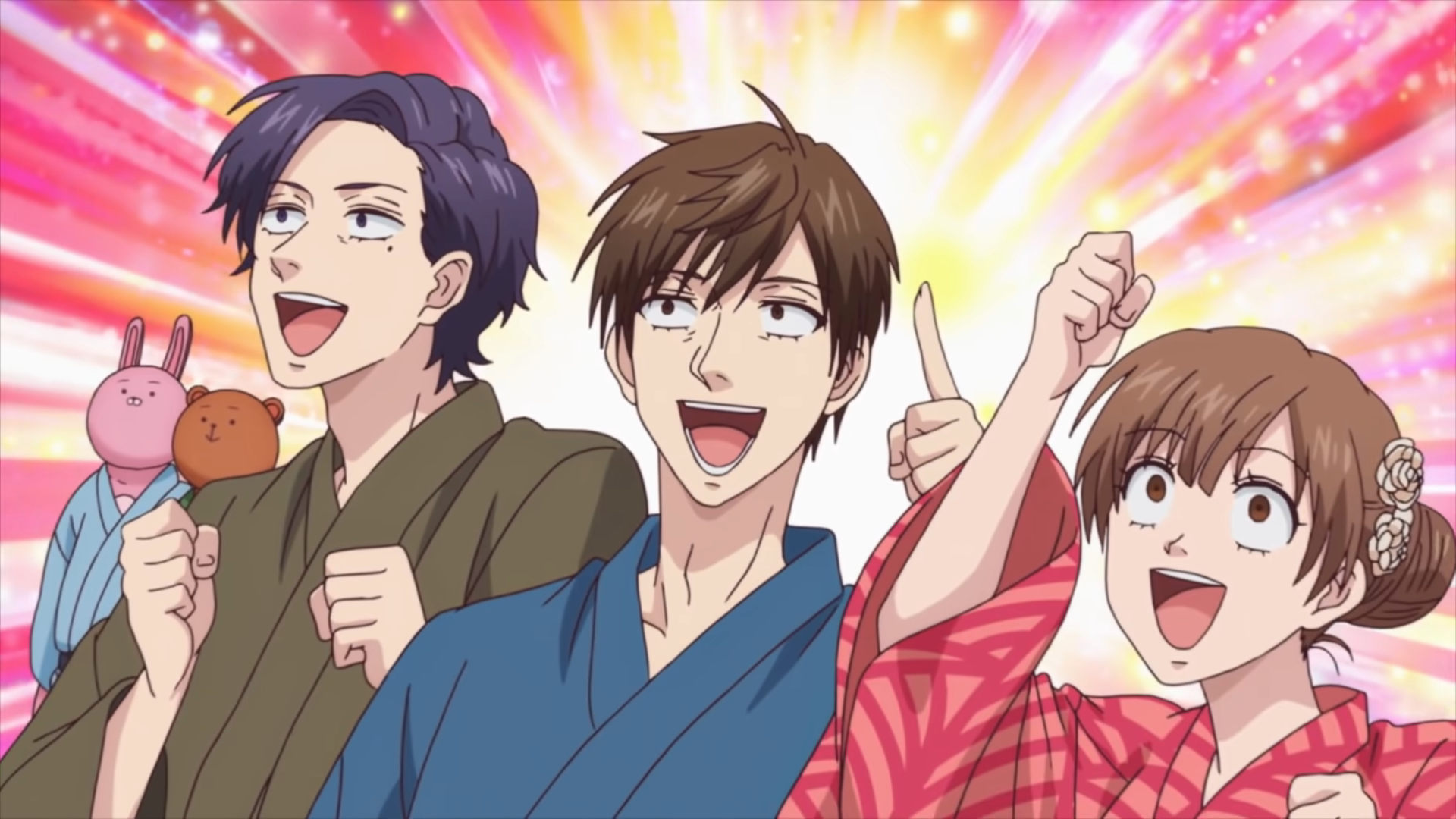 Fortunately, Uramichi isn’t the only one suffering on Together with Maman. The singing duo of Iketeru (Mamoru Miyano) and Utano (Nana Mizuki) have their own share of issues, with the former having too much of a childlike mentality and the latter having trouble with her singing career and live-in boyfriend. Then there are the animal mascot duo of Usahara (Tomokazu Sugita) and Kumatani (Yuichi Nakamura), both of whom have trouble keeping their mouths shut at the worst exact time. All of them soldier through the recording of the children’s show, and deal with some of the worst behind-the-scenes shenanigans anyone can imagine.

The best way to describe Life Lessons with Uramichi Oniisan is a blend of Mister Rogers’ Neighborhood and This is Spinal Tap. With the former, you see a children’s television program being made, as it teaches kids morals, values, and thought-provoking lessons with a good morsel of fun. It’s how these shows are made and the lessons being told where the Spinal Tap comparison comes into play. Every single worst-case scenario that could happen during a kids’ show filming happens in this series, and it’ll make you both cringe and laugh your ass off! 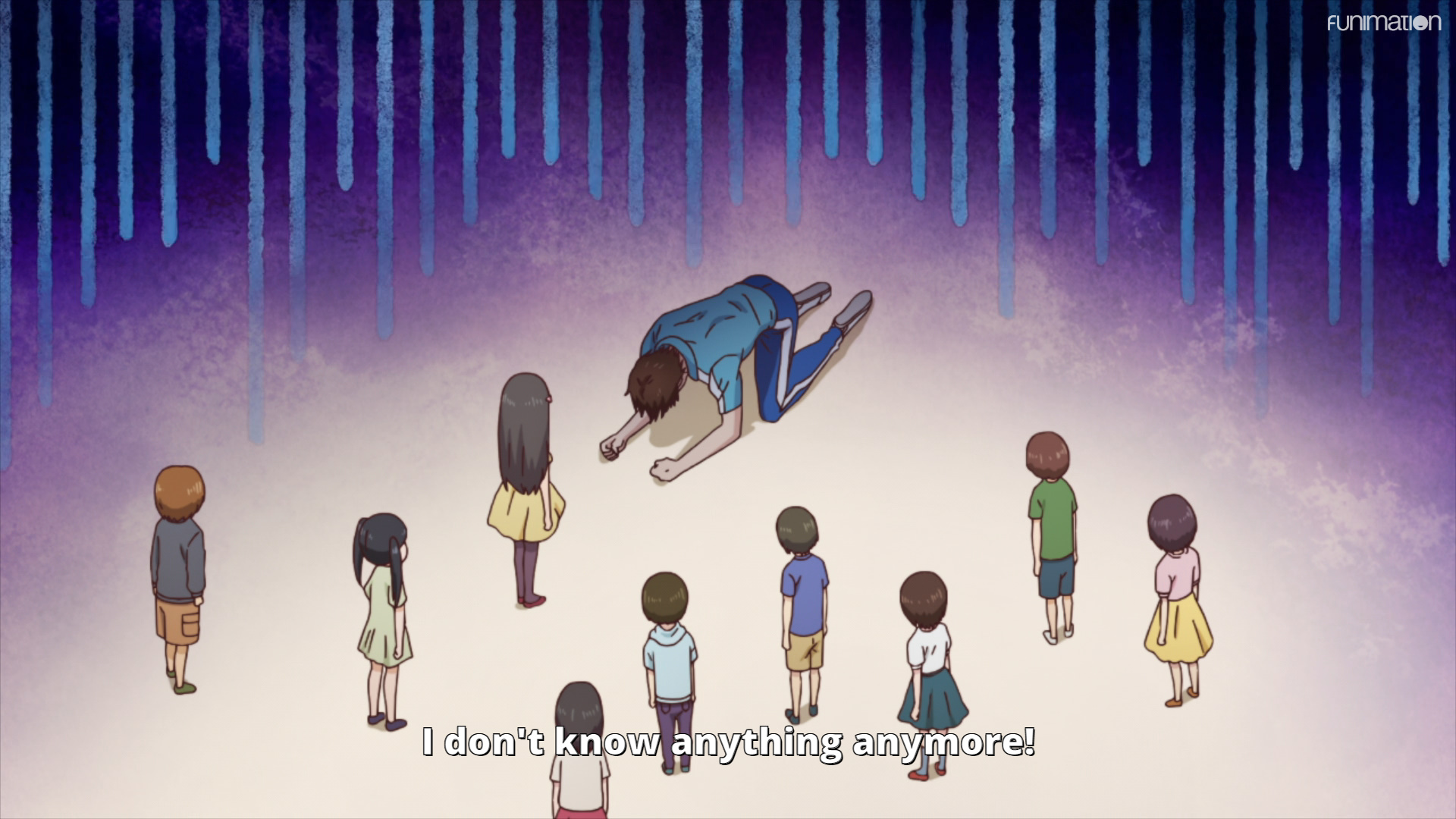 At first, the cringe-worthy stuff is merely the things that come out of Uramichi’s mouth. His true depressed self seeps through at the absolute worst times, as he teaches the kids certain adult things that the little ones have no business knowing. Of course, sometimes the kids are the ones who set him off with their questions, such as “How come you don’t have kids yet?”, “What’s harassment mean?”, and “What was the relationship with your Dad like?” And the cameras keep on rolling, as everything is put to tape and aired days later.

But then, the horror shows begin, and the main culprit of it is the Together with Maman director Derekida (Kenyu Horiuchi). His demands for flashy entrances, last-minute in-person events, and even weekend “getaways” show just how grueling it is to work on a children’s television programs. The most painfully funny moments are when he has the cast record a summer video in the winter and, well, you can only guess what he makes Uramichi and the gang do in the summer! Yet despite the two similar story lines, Life Lessons with Uramichi Oniisan manages to churn out new jokes, punchlines, and visual gags that’ll take any viewer by surprise. 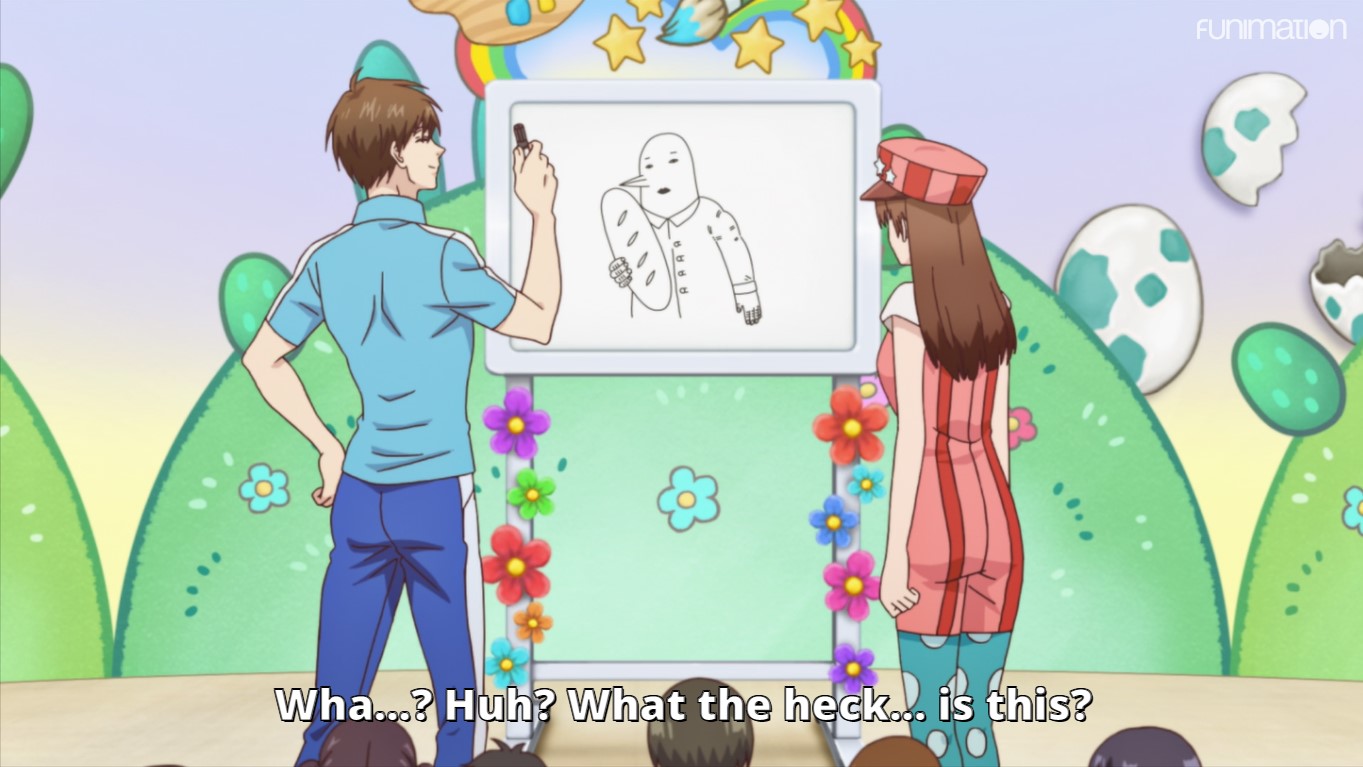 When the show goes down relatable paths, that’s when viewers will find themselves laughing while trying not to cry as they look into the mirror. It’s obvious that no one on Together with Maman wants to be there. Uramichi merely wants to weight train; Utano wants a successful music career; Iketeru yearns to be in stage musicals; even the duo of Usahara and Kumatani want something better in life, especially away from Uramichi’s toxic personality. And yet, they all have to march on through every recording with a fake smile, just like every person in the world who’s forced to work someplace they despise! Moments like this will make anyone groan with relatability, albeit with a chuckle in the belly mixed with said emotional pains.

The humor hits hard thanks in part to its perfect cast. You cannot ask for a better person to play a depressed children’s TV show host than Kamiya, who delivers his lines with both pure joy and sadness. Mizuki uses her talents as a J-POP singer to bring out Utano’s passion for performing in both heartfelt and hilariously soul-crushing ways. Sugita’s Usahara knows how to sound like he’s in physical pain with such comedic perfection, with Nakamura’s Kumatani adding some backbone to the stage crew thanks to his tone and backstage attitude. As Iketeru, Miyano showcases a cute childlike attitude that sometimes bring to mind Steve Carell’s Anchorman character Brick Tamland. 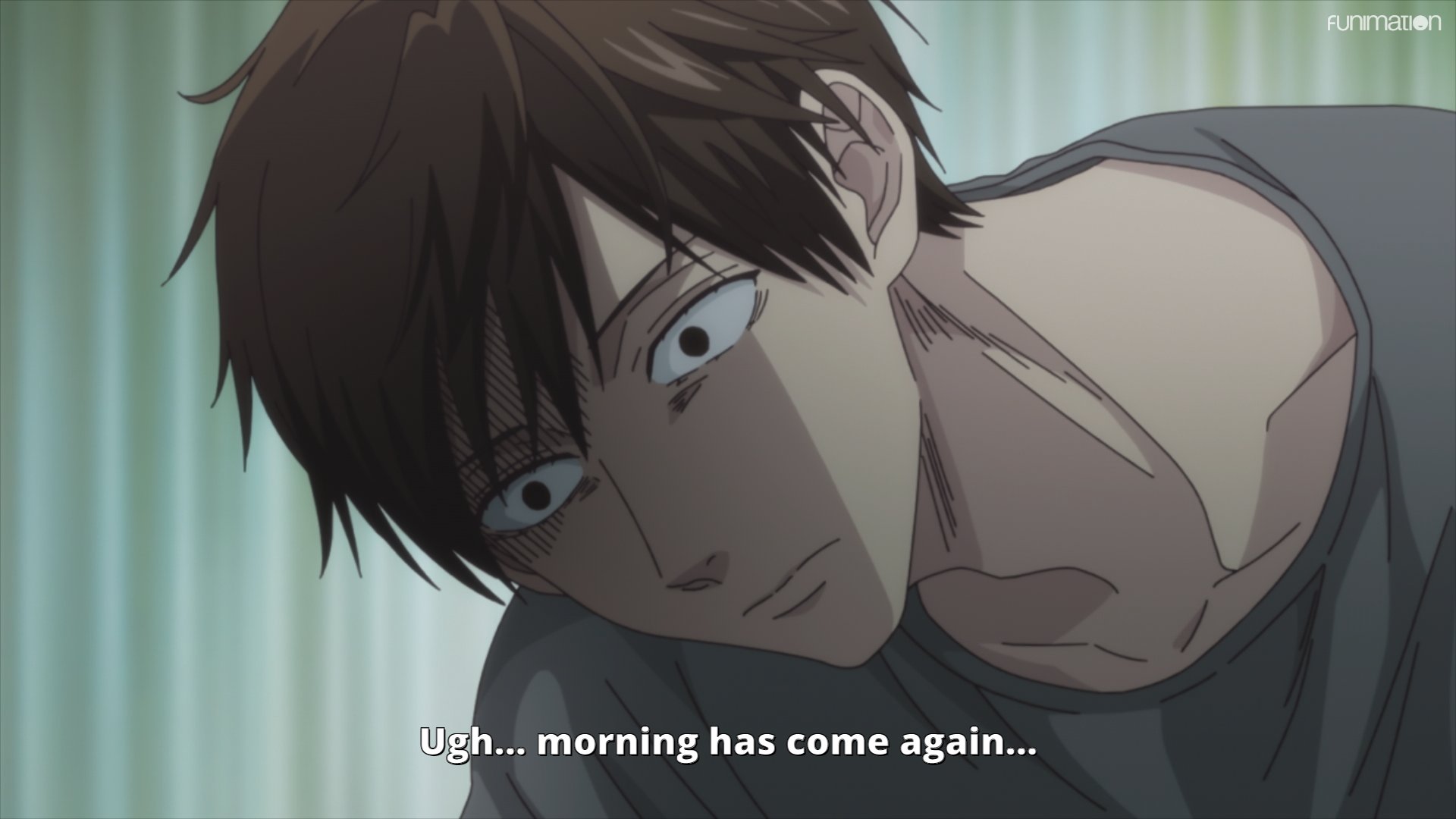 Speaking of Miyano, he and Mizuki steal the show with the songs they perform on Together with Maman. They at first seem kid-friendly, only for them to take a sharp left turn towards existential crises. They may sound cute, but their lyrics will no doubt deliver a jab to one’s spirit the more the songs continue onward.

Studio Blanc. (My Girlfriend is Shobitch) brings the anime to life with the right amount of love and care. There are moments where character movement can be slightly stiff, especially when not much is happening in the scene. However, their facial expression game is on-point, amplifying the frustration these characters are going through.

I don’t think I’ve laughed harder at anything this year like I have with Life Lessons with Uramichi Oniisan. The jokes & visual gags are hilarious, and its execution is flawless thanks to its phenomenal cast. Life Lessons with Uramichi Oniisan delivers some of the sharpest television production-based satire seen in its medium. If it makes as perfect of a landing as one of Uramichi’s flips, then consider this the first anime comedy masterpiece of the 2020s!

Life Lessons With Uramichi Oniisan can be viewed on Funimation, and has been licensed by Funimation. Episodes 1-10 were observed for this review. Promotional consideration provided by Funimation.