GAME REVIEW | "Bustafellows" Brings Romance and Thrills to the Switch 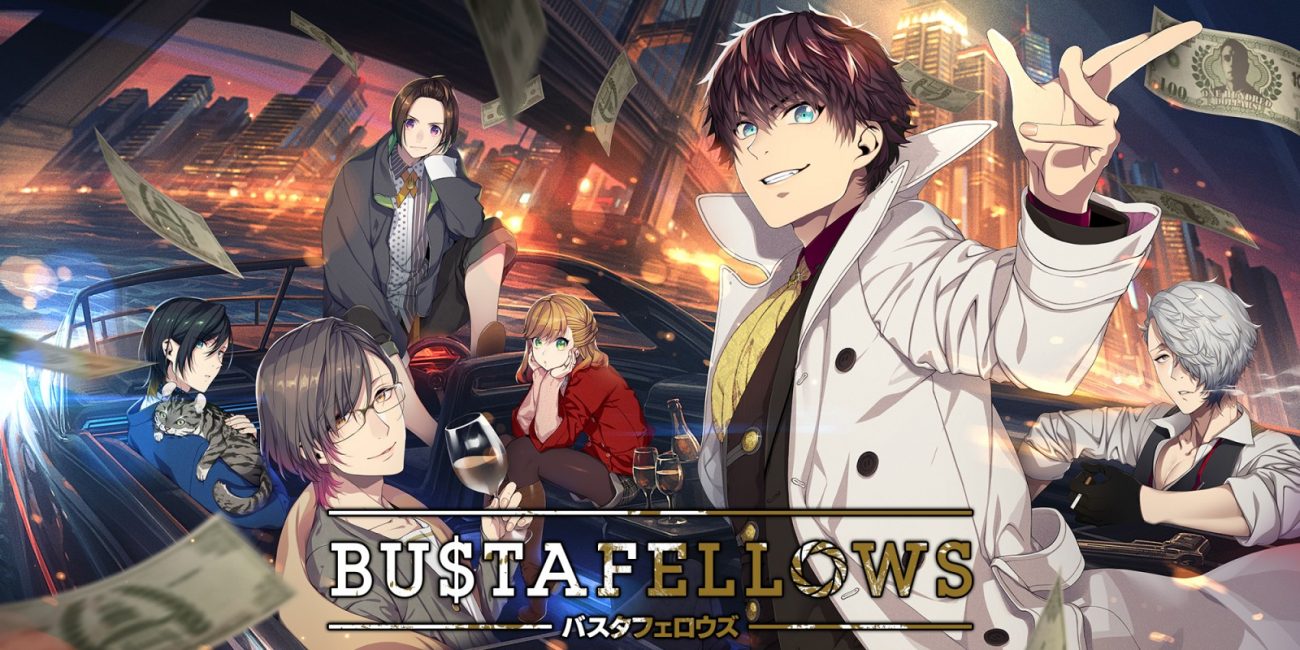 GAME REVIEW | "Bustafellows" Brings Romance and Thrills to the Switch

Hitmen, hackers, mafia bosses, and...time travel? In my otome game? It's more likely that you think.

Originally released in Japan for the Switch and mobile back in 2019, Bustafellows is a crime noir romance visual novel developed by lesser-known studio Extend and localized for English audiences by PQube - the publisher’s first venture in the otome genre, and hopefully not their last. Impressive in nearly all regards, the game not only looks stunning, but delivers a compelling rollercoaster ride of a story featuring a charming cast of characters that I adored from start to finish.

Bustafellows is set in the city of New Sieg - a bustling metropolis that’s part San Francisco, part New York. Players fill the shoes of Teuta Bridges, an ambitious young newspaper reporter, whose normal life is shattered to pieces when Limbo, New Sieg’s most infamous crooked lawyer, is assassinated right before her eyes. Dying in her arms and solely party to his final words, she vows to save his life - and in doing so, sinks deep into the dangerous machinations of the New Sieg’s criminal underbelly.

But how, you ask, can she save a dead man? Well: time travel. 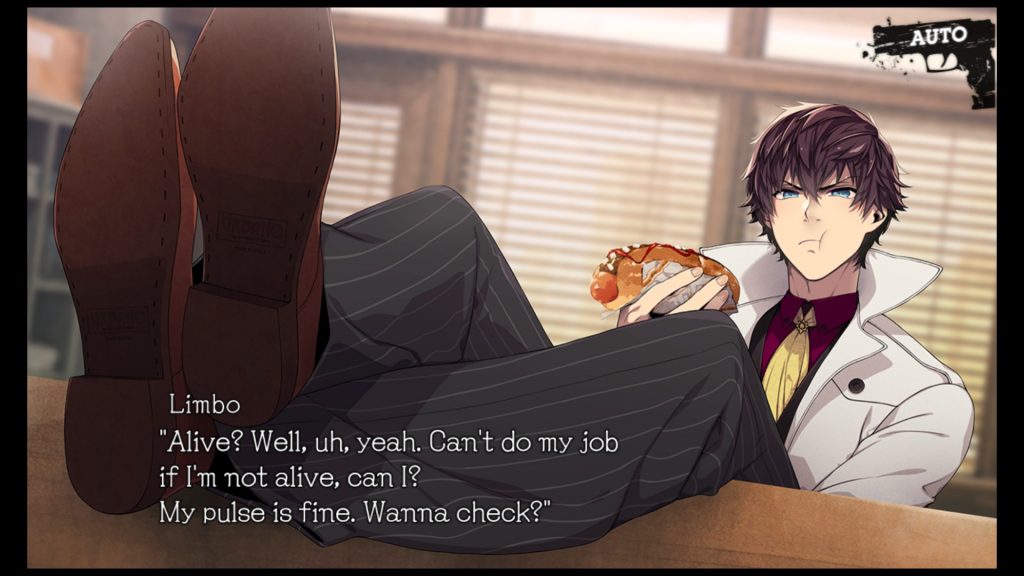 No, you didn’t just turn over two pages at once. Somewhat out of place in a setting otherwise firmly grounded in reality, Teuta has the ability to travel back in time: Quantum Leap-styled, into the bodies of strangers. It’s not a perfect ability - her time in the past is limited to just a few minutes, and she can’t go back more than a couple hours at most, but it gets the job done. After preventing Limbo’s death, circumstances force Teuta to live with him and his crew; an Ocean’s 11-esque vigilante group of self-interested, but ultimately good-natured (and very handsome) men, who steal from the evil and corrupt for fun and profit. Hijinks, drama, and romance ensues.

Visually, Bustafellows can do no wrong. I was blown away by how good this game looks. From its gorgeous opening cinematic that seamlessly blends 2D assets with 3D animation, to its stylish menus and immersive sound design, no expense was spared in its presentation. Character illustrations by Kohaku Sumeragi (famously known for her eroge work) are vibrant, attractive, and full of personality, vocally brought to life by a talented cast of industry veterans. Character portraits and CGs are semi-animated to speak, emote, and change appearance as the plot demands. Even minor side characters are given the VIP treatment. Without exaggeration, it's one of the best looking visual novels I’ve ever played. 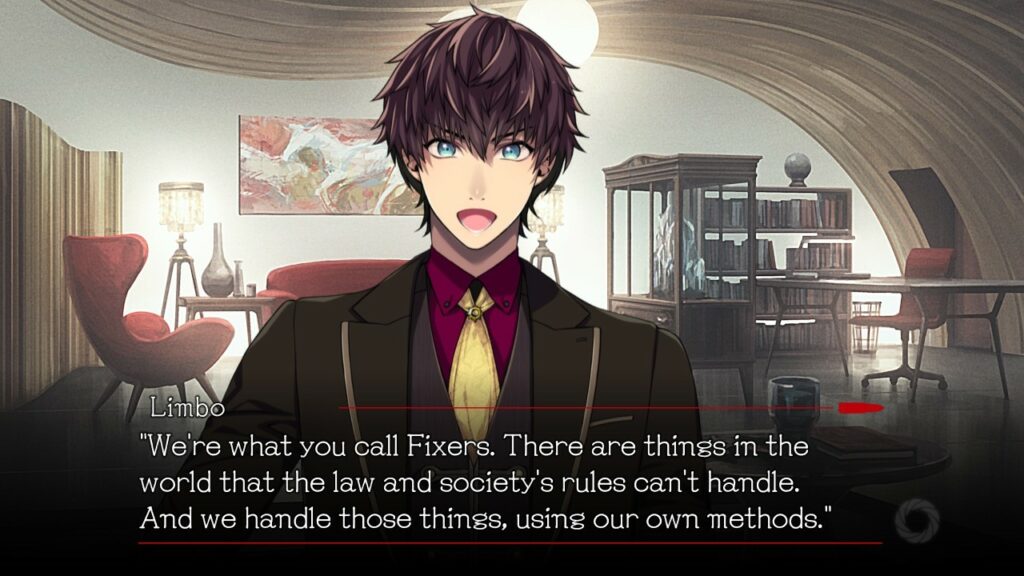 Thankfully, its story manages to meet the high bar its visuals set. The narrative Bustafellows spins is an exciting romp of high-stakes action and thrills, tampered by moments of touching sincerely, comic relief, and melodrama.

Teuta can pursue a relationship with any member of Limbo’s crew - each with their own demons to overcome and dark pasts to confront. Members include Limbo himself, a goofball genius hacker, an amorous plastic surgeon, a stoic bounty hunter, and a soft spoken coroner. Each guy is unique and brings something different to the table, romance-wise, and I’m happy to report there isn’t a dud among them; even characters I initially had no interest in surprised me with their hidden depths - Teuta herself included. She’s a fully realized character with her own agency, rather than a blank slate for players to project onto. Sequences when Teuta time travels are some of the most exciting moments of the game; showcasing her resourcefulness and drive as she races against the clock to desperately avert various disasters and deaths.

Depending on which guy you pursue, the story will morph into anything from detective work chasing down a serial killer, to heisting paramilitary secrets to sell on the black-market. Be aware, however, that all routes eventually lead the player through some pretty heavy themes (not limited to human trafficking, drug use, xenophobia, and prostitution), so players uncomfortable with these more mature elements should give Bustafellows a pass. Nothing graphic is ever depicted explicitly on screen, but the topics are present throughout the entire game, as injustice, corruption, and systematic oppression unify the main cast’s backgrounds and struggles. 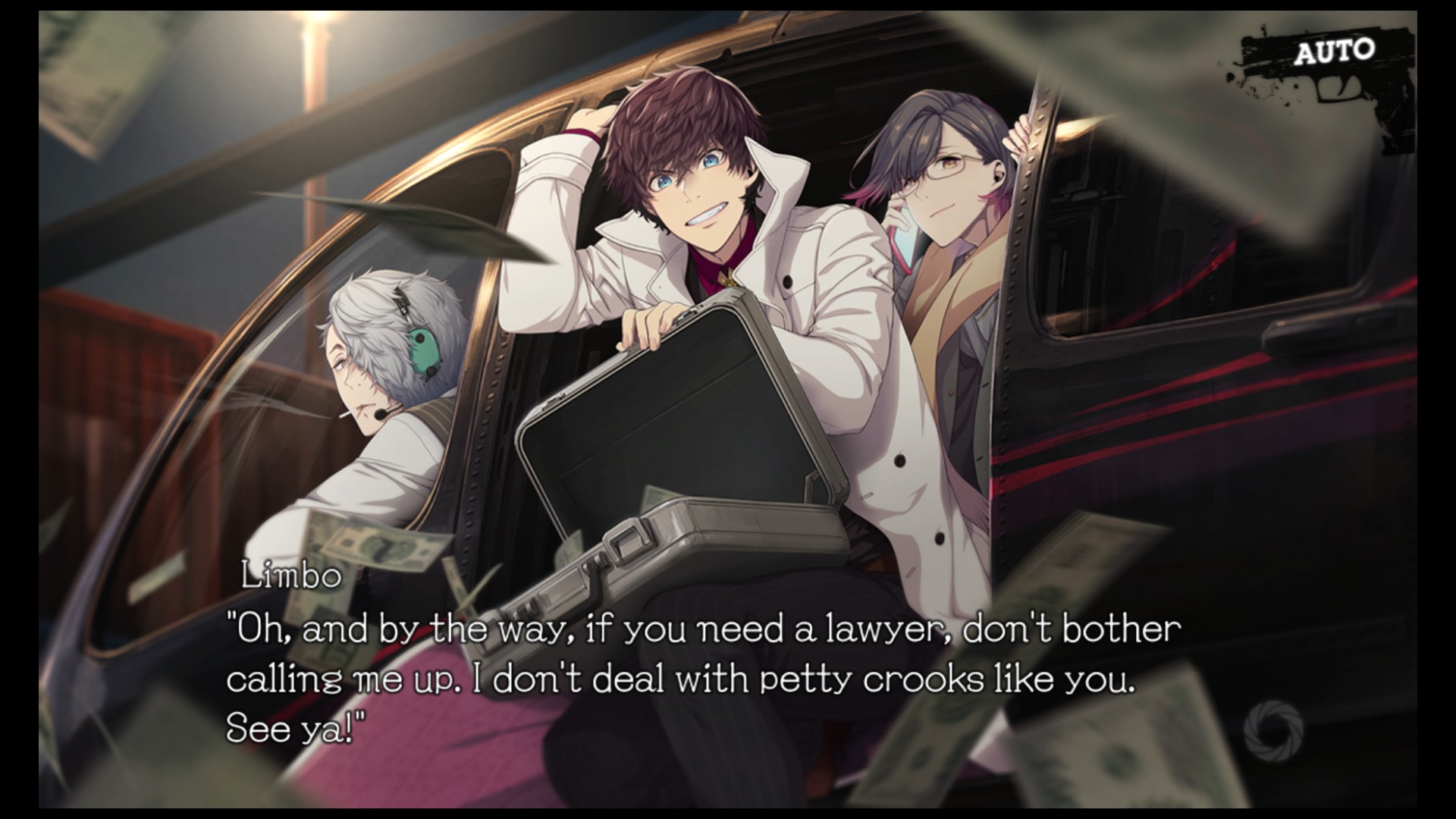 Gameplay-wise, Bustafellows is typical otome fare. During key moments of the story, players can choose dialogue options that affect Teuta’s relationship status with other characters. Helpfully, each love interest is assigned a color motif, and choices that increase their affinity toward Teuta will flash their color after selection, making it easy to know if you’re on the right track to winning a specific character’s heart. Not so helpfully, you can’t save during these selections, and some are on a timer. More anxious players may be better off following a walkthrough than going in blind.

What’s not typical, however, is players being able to pursue characters in any order they like (no route is locked behind the completion of another). While this means no love interest’s route feels more “canon” or important than any other, and players can jump straight into dating the guys that interest them the most, this also means no one route can serve as the game’s finale, or give away too much information about any larger mysteries at play. All the biggest revelations about the game’s overarching conspiracy narrative are saved for two side stories unlocked after completing everything else. I didn’t mind this, but players looking for a more interconnected narrative across all routes, rather than an episodic, character driven experience, may be disappointed by this clear separation between setup and payoff. 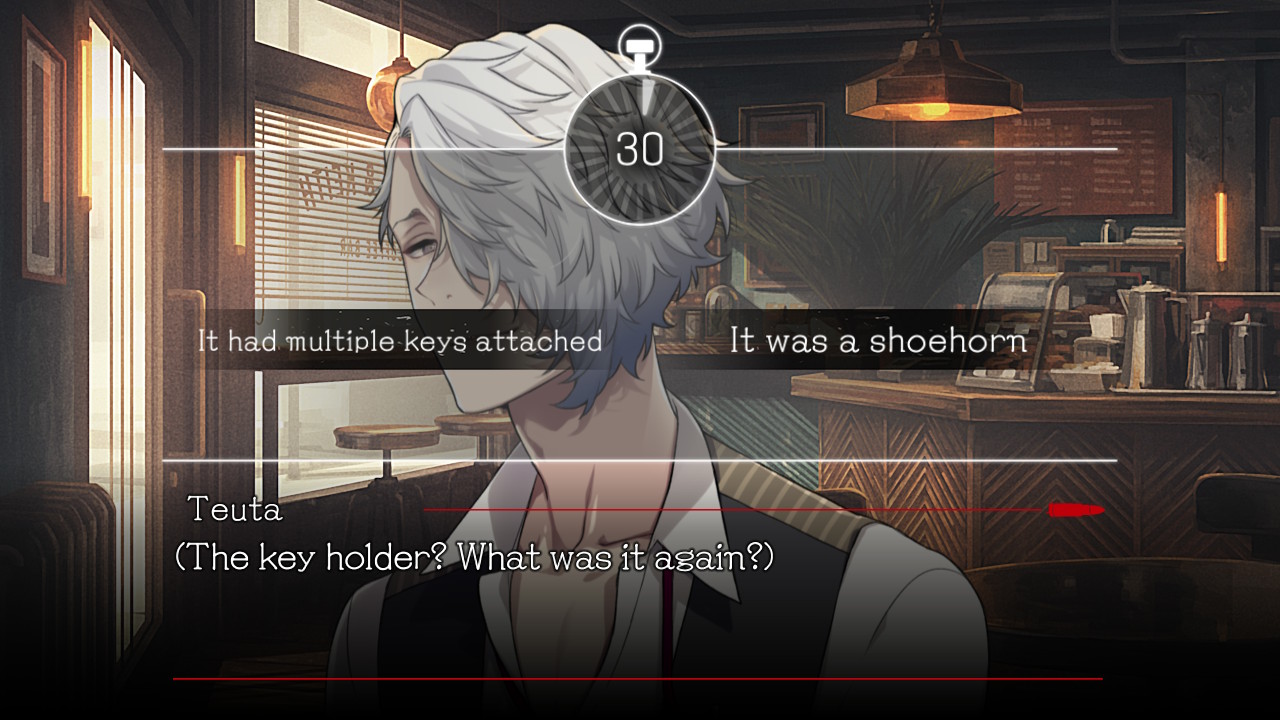 PQube’s localization is overall solid; I counted only a sparse handful of formatting mistakes and misspellings over thirty plus hours worth of dialogue and narration. Unfortunately, there are instances when characters speak during the fade-in to scenes with no accompanying text box, leaving non-Japanese speakers briefly in the dark. You can check the game’s text backlog to find out what was said, but doing so is immersion breaking, and the final cutscene movie of the game suffers from this same issue, and the backlog isn’t available. I was able to infer most of what was being said through context clues, but I pity anyone who’s not accustomed to Japanese trying to parse these moments on the fly.

Ultimately, Bustafellows does a lot of things right. From its well-developed cast of characters, to its dazzling art, bombastic soundtrack, and engrossing narrative, it’s hard not to recommend just about anyone would give it a fair shot, whether they enjoy otome games, crime noir, pretty boys, or visual novels in general.

Written by JenQuest. Reviewed on the Nintendo Switch.

ANIME REVIEW | A Beautiful Day in... 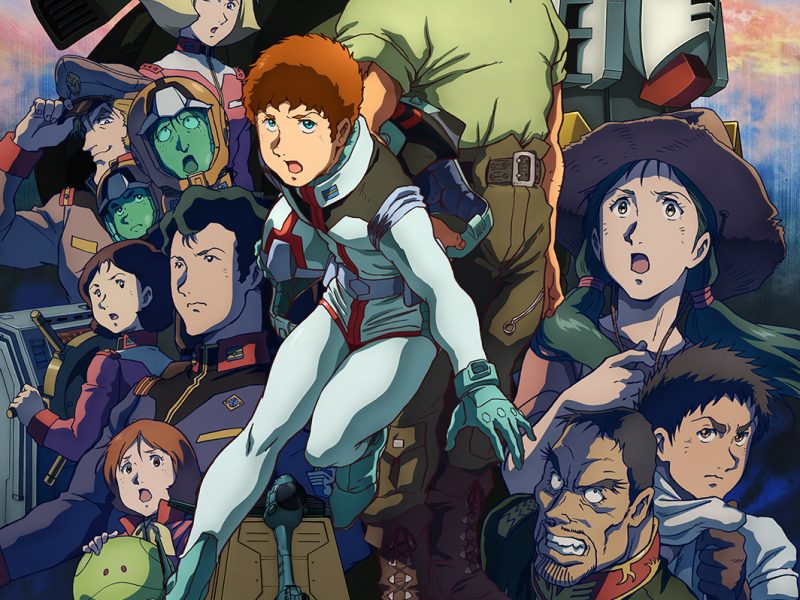