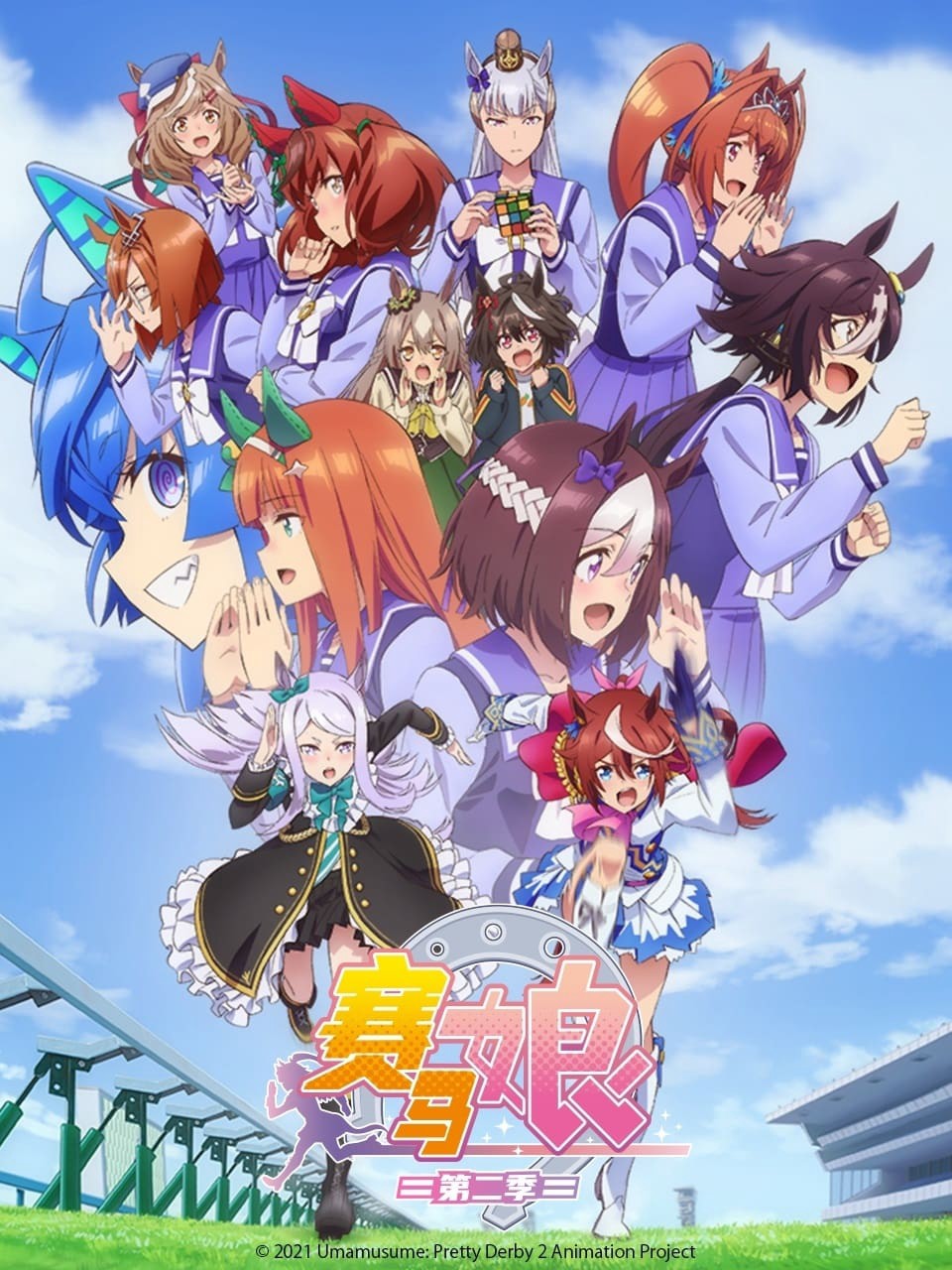 Many of us laughed at the concept of Uma Musume: Pretty Derby when it was about to air in Spring 2018. But as the episodes went on, the majority of viewers were shocked to see that it wasn’t a bad anime at all. In fact, outside of the silly concept revolving around horse girls, Uma Musume was packed with great writing, terrific voice acting, and a narrative that was as good as most of the great sports anime out there. So if Season One followed a horse girl’s pathway to glory, then what would Season Two then focus on? The answer is actually quite surprising.

Focusing now on the character of Tokai Teio (Machico), Season Two of Uma Musume is about the hardship that runs alongside an athlete’s path towards a comeback. Tokai Teio is considered by many to be one of the best racers out there, with her rivals Mejiro McQueen (Saori Ōnishi) and Twin Turbo (Miharu Hanai) admiring her as much as they wish to defeat her. But when an injury sidelines Tokai Teio, she and Trainer (Koji Okino) plot out the best way to get her back to a perfect racing condition. However, the journey to recovery is easier said than done. 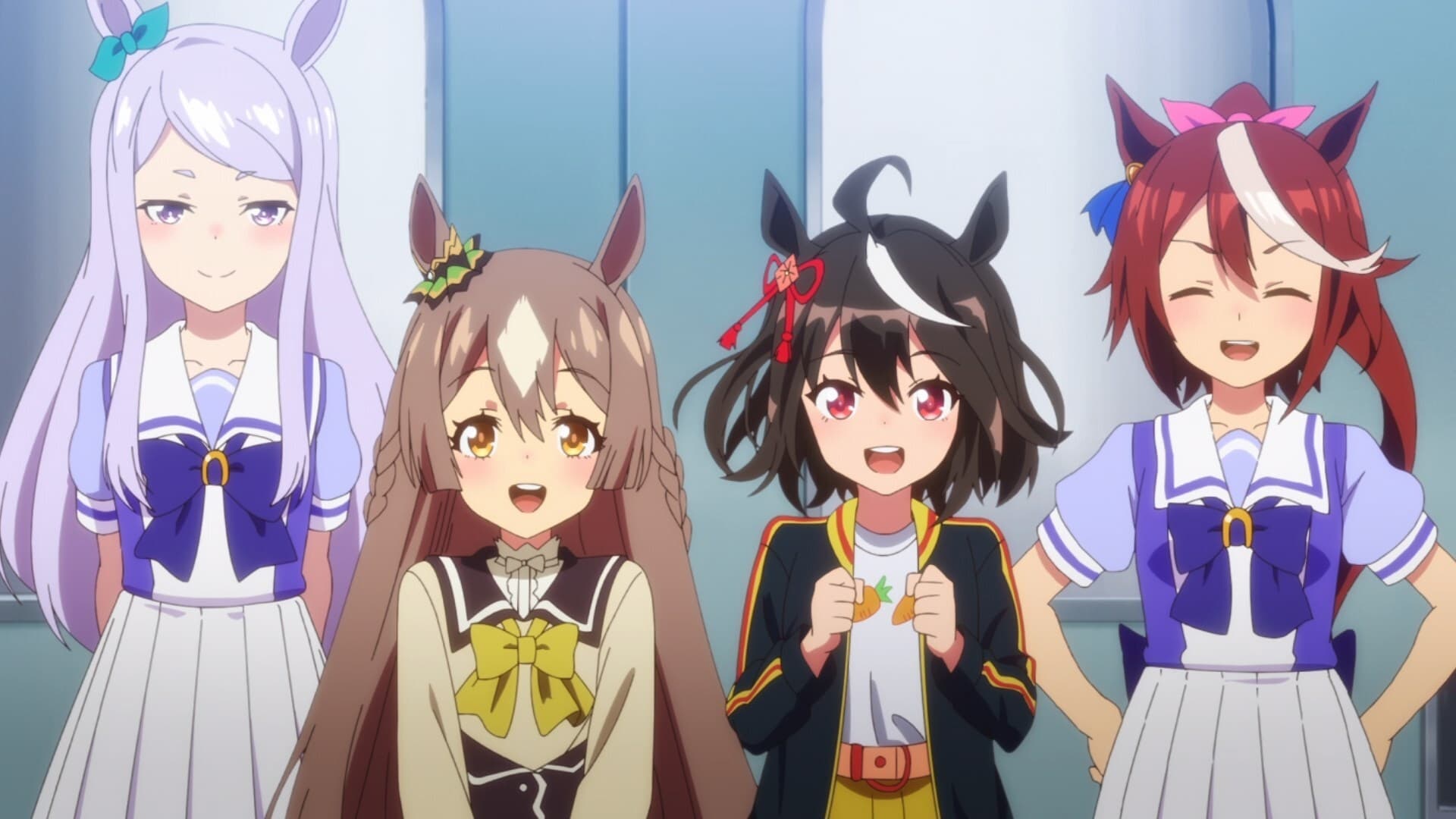 Most times in sports anime, an injury will befall an important character. Said character will then go through of the motions of training, therapy, and then come back stronger than ever. These aspects give viewers an inspirational narrative that shows that no matter what trouble life throws at you, you just pick yourself back up and march on forward. So it’s rather surprising to see Uma Musume not follow that formula; quite the contrary, it does the opposite!

Throughout the second second, Tokai Teio finds herself constantly injured, and not in a humorous way like what happens to Gold Ship (Hitomi Ueda). She pushes herself to make a racing comeback, but doing so adds more injury to her leg. Just as soon as she thinks she’s ready to compete, Tokai Teio once again finds herself on the ground, holding back tears as the pain runs through her body. It reaches a point where she doesn’t even think she’ll compete in the same way again, via a realization that’ll hit any viewer right in the gut. 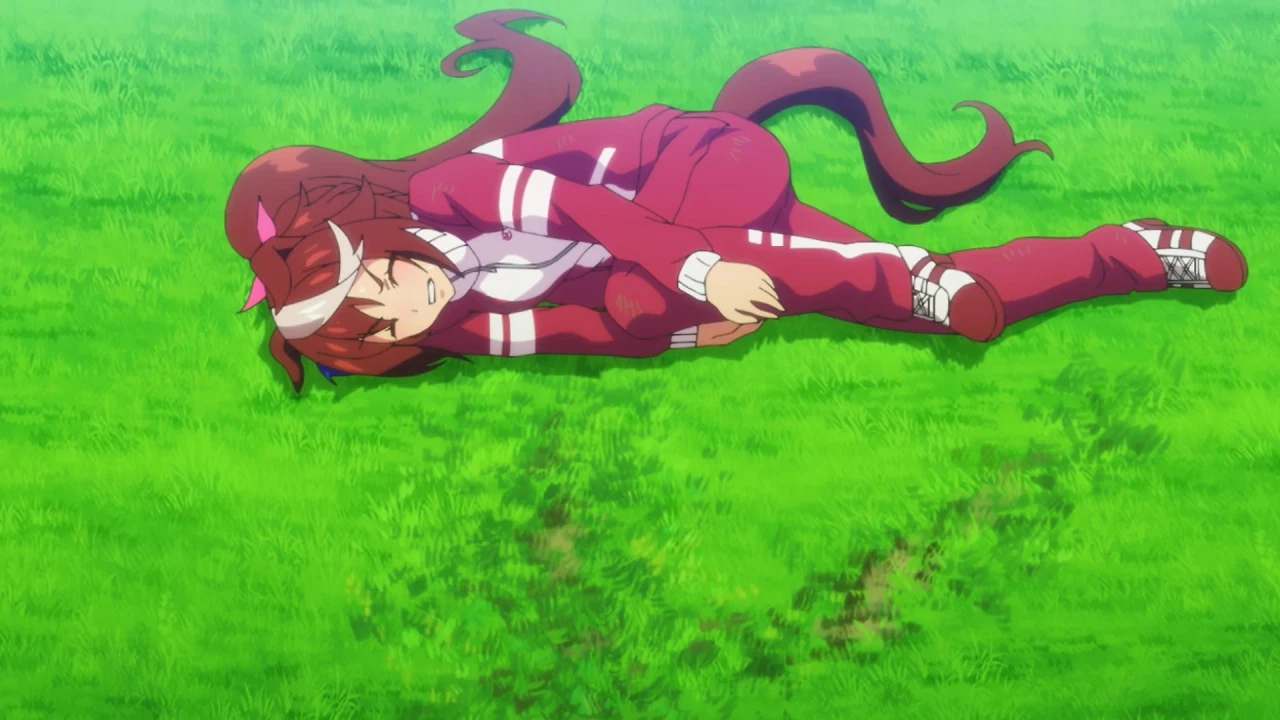 Even with McQueen, Trainer, and first season’s focus Special Week (Azumi Waki) doing all they can to push her, Tokai Teio has no choice but to look at the big picture. Despite some of the off-the-track fun she has with her teammates and the like, she wallows in sadness over the fact that she may never reach the top again. The fans she has also try to convince her to keep pushing herself, and even though they somehow talk her out of retirement, Tokai Teio still knows that she’ll never be as strong a racer as before.

I have to commend the writers of Uma Musume for choosing this path for Season Two. What could’ve been just a simple cute show about horse girls has transformed itself into a genuine sports drama. It’s no Haikyū!!, but the amount of heartache we’re seeing Tokai Teio, Mejiro McQueen, and even spotlight stealer Rice Shower (Manaka Iwami) — who often deals with cold responses after her wins — is more than what we would’ve expected from a show about horse girls. Say what you will, but this anime knows what it’s doing when it comes to showcasing hardships, from injuries, defeats, and even victories! 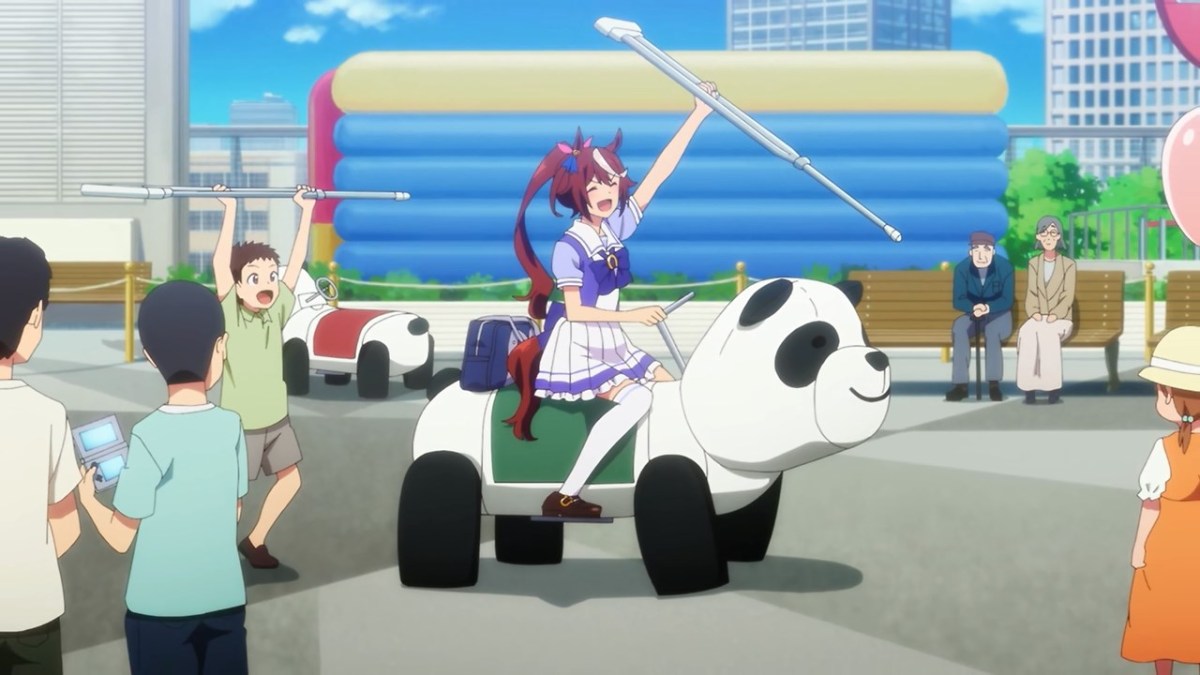 Fortunately, there’s still enough humor thrown in here and there to keep viewers hearts from completely breaking. Some are running gags, like a barber who often messes up her customer’s hair to the extreme or Gold Ship’s dumb antics. But even Tokai Teio gets a good laugh here and there, especially when she’s forced to go through some rough training at her friend’s mansion. There’s also the humorous facial reactions, which returning director Kei Oikawa mastered when he helmed Hinamatsuri.

Which leads me to this season’s animation quality. Now done at Studio KAI instead of P.A. Works, the characters of Uma Musume are just as cute and expressive as they were in the first season. However, I cannot help but notice the more obvious use of CGI during the race sequences, rather than the traditional animation in the first. These moments appear when the race is shown from far away, with the hand-drawn moments saved for closeups. It’s not bad, but it’s noticeable enough to be considered jarring. 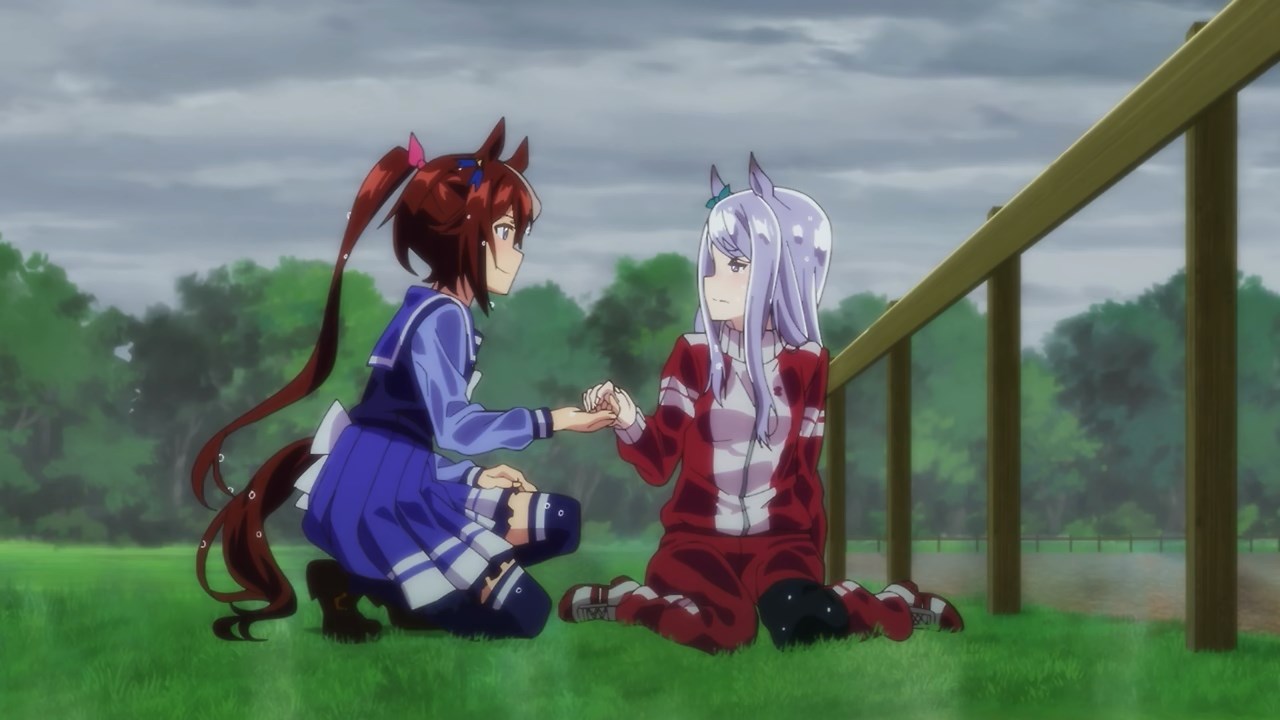 The voice cast is still just as strong as before. Machico does a fantastic job conveying Tokai Teio’s feelings when she’s both at the top of her game and when she’s pushed to the bottom. Ōnishi’s Mejiro McQueen is the right amount of heart and confidence, with her voice acting showcasing why she’s the perfect friend and rival to Tokai Teio. Even though she now plays second fiddle, Waki manages to brighten up the screen with Special Week’s bubbly personality. Even Okino’s Trainer has some great acting moments, especially when it seems like Tokai Teio’s chips have run out.

Taro Iwashiro and his Utamaro Movement return to bring a dazzling soundtrack that captures the excitement of the race and the heartbreak of career-jeopardizing injuries. Opening theme “Yume wo Kakeru!” by the main cast captures the excitement and spectacle well of a great race, as well as showcases the cuteness and endearing attitudes of the main cast. Ending theme “Komorebi no Yell” by Machico and Ōnishi is a lot more softer and somber than its opening counterpart. However, it matches well with the sadder tones that this season puts into the spotlight.

Uma Musume: Pretty Derby could’ve just had the one-and-done season from 2018, and I would’ve told you it was worth the watch. Season Two, on the other hand, has defied my expectations of what a show like this can pull off. While it does falter in its racing animation, it’s when the show goes off the track and into the mindsets of Tokai Teio, Mejiro McQueen, and the rest of the cast when we see the show shining its brightest. Those who push Uma Musume aside solely because it merely looks cute will greatly regret not diving into what is — quite shockingly — some of the best sports drama I’ve seen in anime in recent memory!

Uma Musume: Pretty Derby can be viewed on Crunchyroll & VRV. Episodes 1-12 of Season Two were observed for this review. Promotional consideration provided by Ellation.