GAME REVIEW | "Kill It With Fire" Slaughters Spiders With Glee 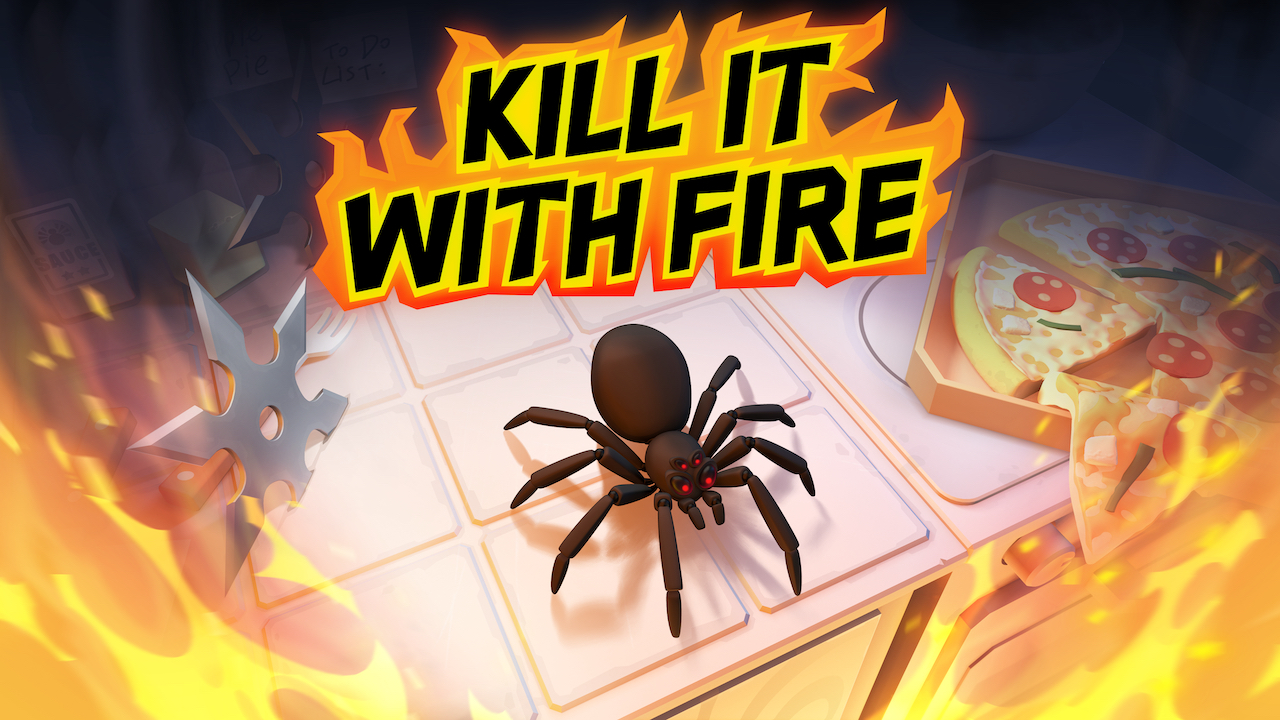 GAME REVIEW | "Kill It With Fire" Slaughters Spiders With Glee

I know many a gamer that’ll kill demons in DOOM with the greatest of ease, but will instantly jump on the highest table if a tiny spider made its way into their homes. Perhaps this is why I can’t help but love what tinyBuild has delivered with their latest game Kill It With Fire. What could’ve easily been just a joke between a couple of game developers has evolved into one of the silliest and most memorable affairs.

Developed by Casey Donnellan Games, Kill It With Fire has you roaming your house, your local grocery store, and even various places like a zen garden and office cubicles with one mission: to kill spiders. These things will hide under pillows, in cabinets, in port-a-potties, and even your toolbox, waiting to jump out and make you wail like a little sissy. As you start upping your kill count, new areas of your vicinity will unlock, which may also result in a new weapon or two to place in your arsenal. 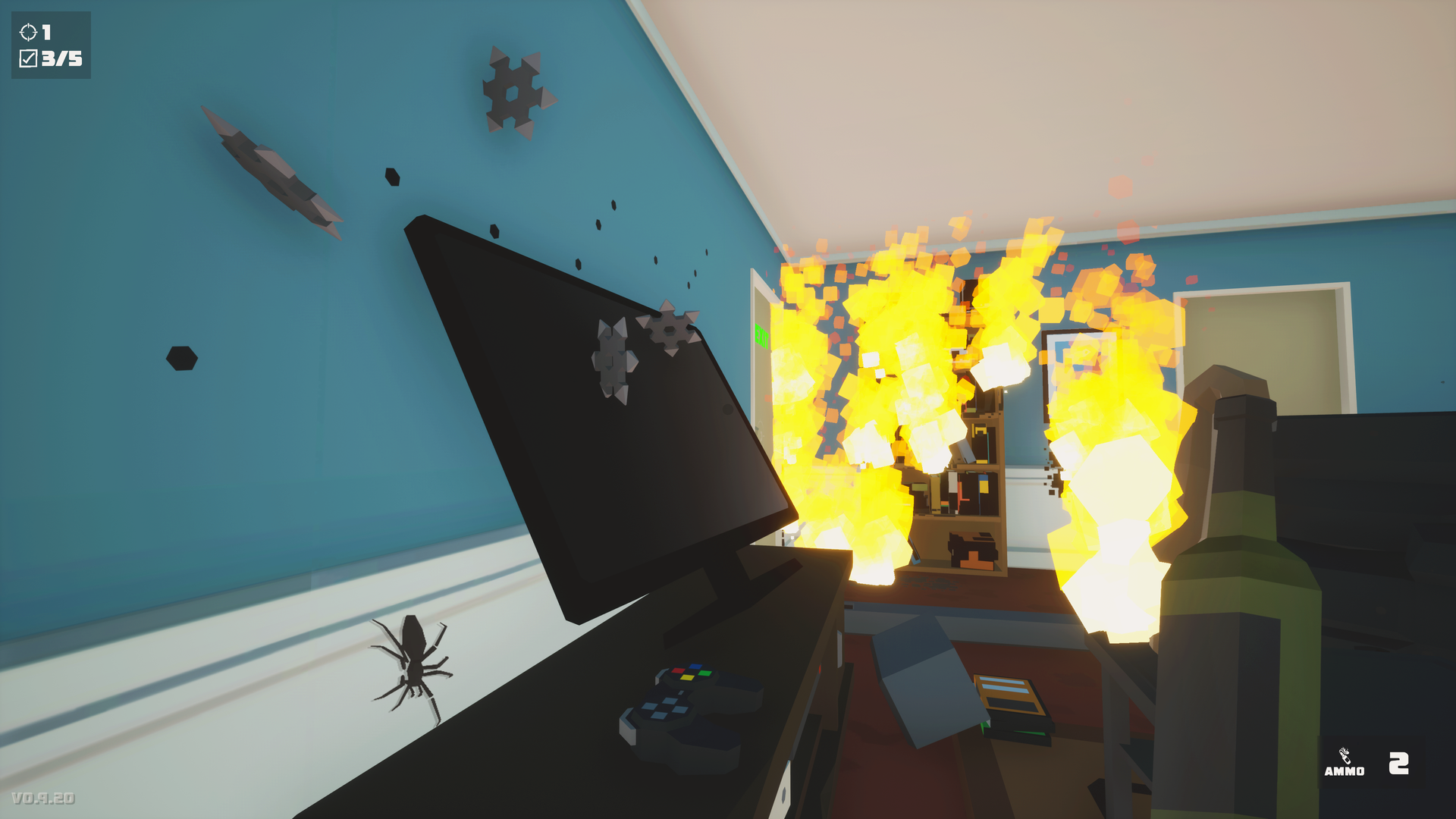 Players start off with a mere clipboard as their spider slayer, as well as whatever isn’t nailed to the floor that can be chucked their way. But as your skills become better, you’ll soon find yourself armed with guns, Molotov cocktails, weed wackers, and — yes — even TNT to help rid you of your bug problem. However, sometimes you won’t be dealing with normal spiders.

In some cases, these spiders will have their own defense mechanisms to evade your hectic goal of exterminating every one of them. Some spiders jump, other can shoot webbing to blind you, and a few can even camouflage, making it even tougher to rid all of them. In rare instances, some spiders will give birth to tinier ones, with them running away faster than you can blink! But with the right arsenal, your spider-killing ways will bear some fruit. 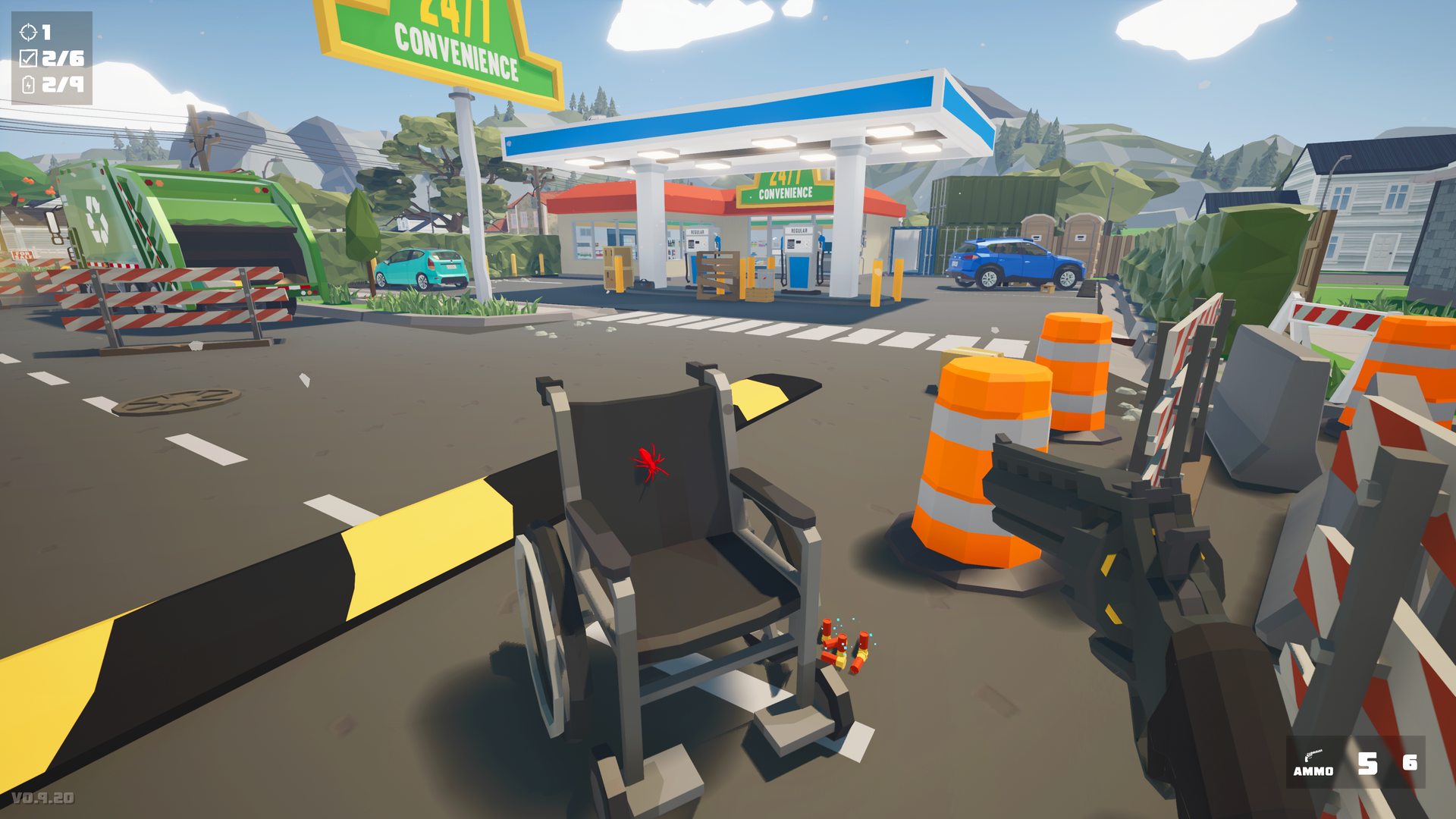 The level of insanity that happens in Kill It With Fire is on-par with what you’d expect from tinyBuild Games. For every spider you kill, you’ll wind up destroying one or two pieces of expensive equipment. Game consoles, book collections, and even entire grocery store aisles will more than likely be turned to burnt debris once you’re finished overcoming your arachnophobia. All of it is presented with pure hilarity, as the chaos that one spider can cause you will result in everything being destroyed around you.

And that destruction is part of the charm of Kill It With Fire. We’ve all seen people freak out over seeing a tiny spider in their kitchen. This game then imagines said person being given every weapon they can think of at their disposal. As a result, it leads to the most ultimate form of overreacting imaginable, as your once clean home is trashed beyond repair. It’s ridiculous, yet at the same time showcased in a way that makes it hard not to love! 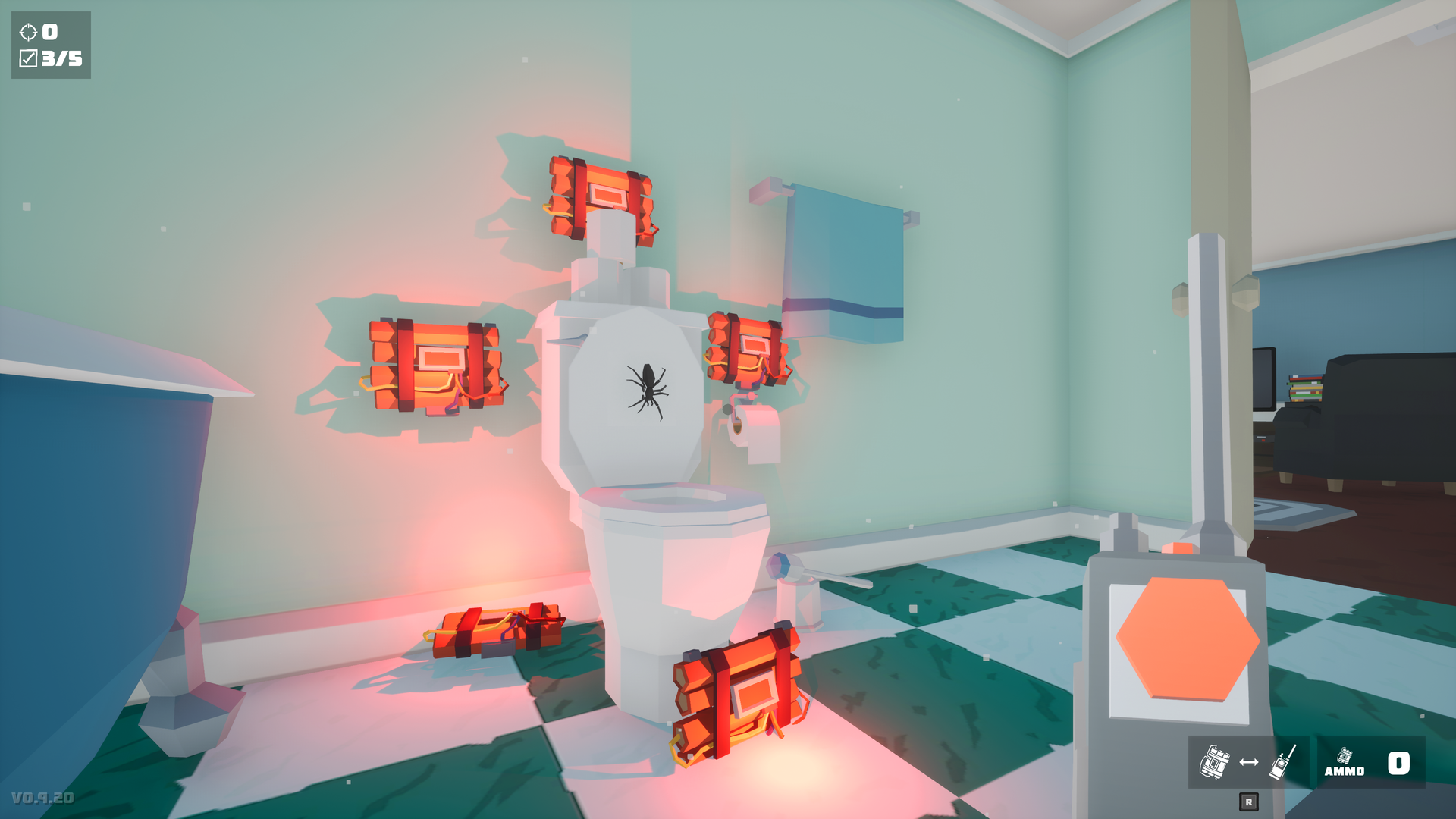 It’s when the game lets your be creative with your exterminating skills where the real fun begins. Combing things like gasoline and a flame-throwing aerosol can will lead to entire areas set ablaze, with spiders running around on fire until they’re dead. Using snacks to coax arachnids to their deaths can result in easy kills, although it’s more fun when you go full berserker on just a single target. So long as you have enough ammo, you’ll be free to slaughter these spiders however you’d like!

Side-quests also add to the fun, such as attempting to kill two spiders with one shotgun blast or splattering one with a thrown book. There are also ones that feel more like chores (which, to be fair, they are) like rearranging your tool shelf or taking out the trash. Then there are some that are kept a mystery until you actually complete it (which occurs in the Zen Garden level). Most of these side missions have their fun points, but a couple became a little too frustrating, especially when it came to finding maybe one or two final items to complete the task. 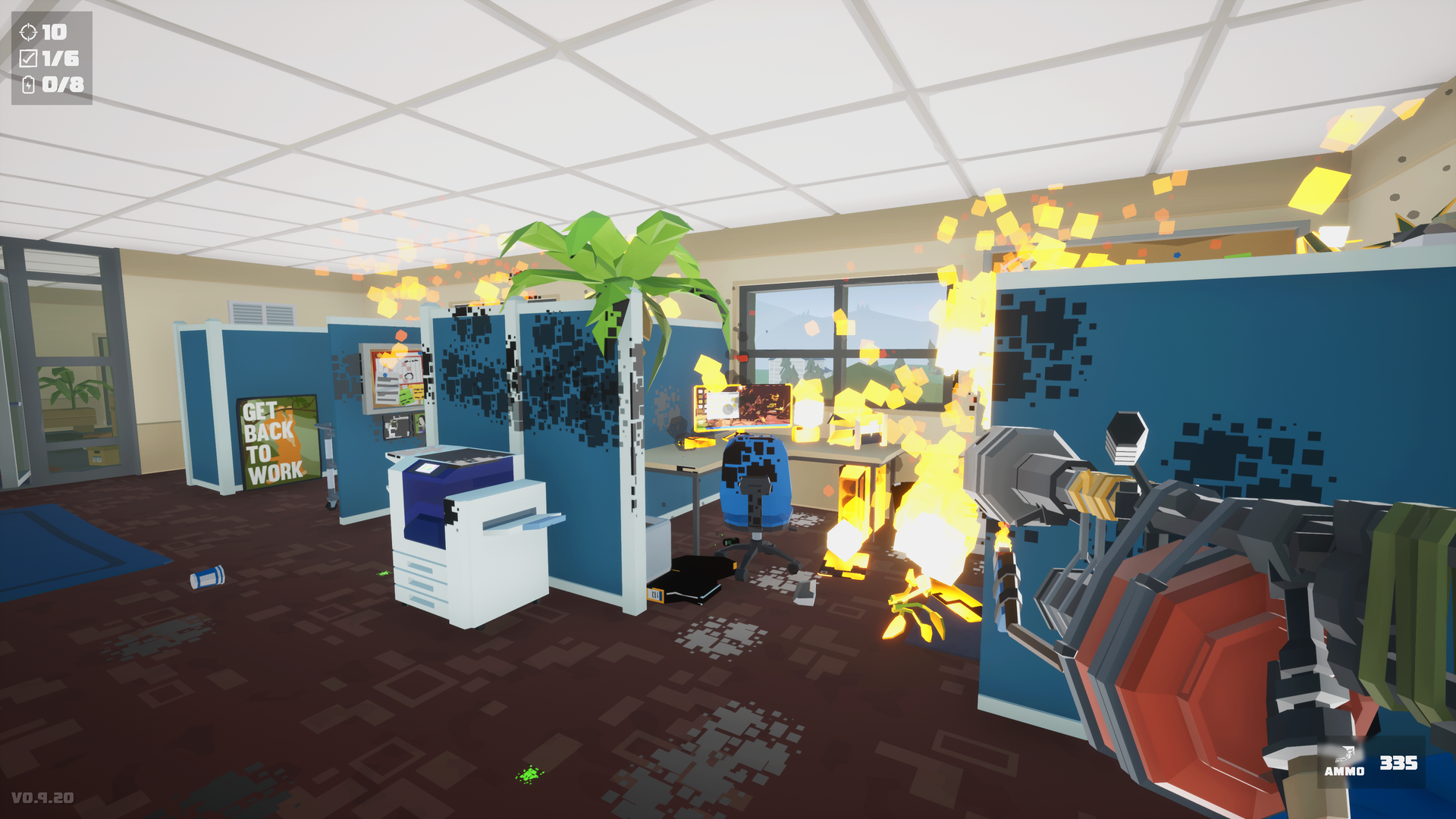 Players can complete Kill It With Fire in about seven hours. However, there’s plenty of replay value to be had, as well as the chance to do some speed running when you’ve got the right weapons to do so. It is just a shame that it’s only a single-player experience, as one can imagine the sort of mayhem a co-op or online mode could bring to the table. Alas, it’s not in the cards for the time being.

Kill It With Fire proves that the dumbest ideas can lead to the best video games. With many levels, a plethora of weapons, and plenty of tricky eight-legged freaks to deal with, tinyBuild’s latest is one of the funniest and most fun bug exterminating games around. These creatures may not be as dangerous as those found in Earth’s Defense Force, but they’ll make anyone freak out enough for them to shriek, “Kill It With Fire”!!!

Promotional consideration provided by tinyBuild Games. Reviewed on the Xbox One.

ANIME REVIEW | The Struggles of In...