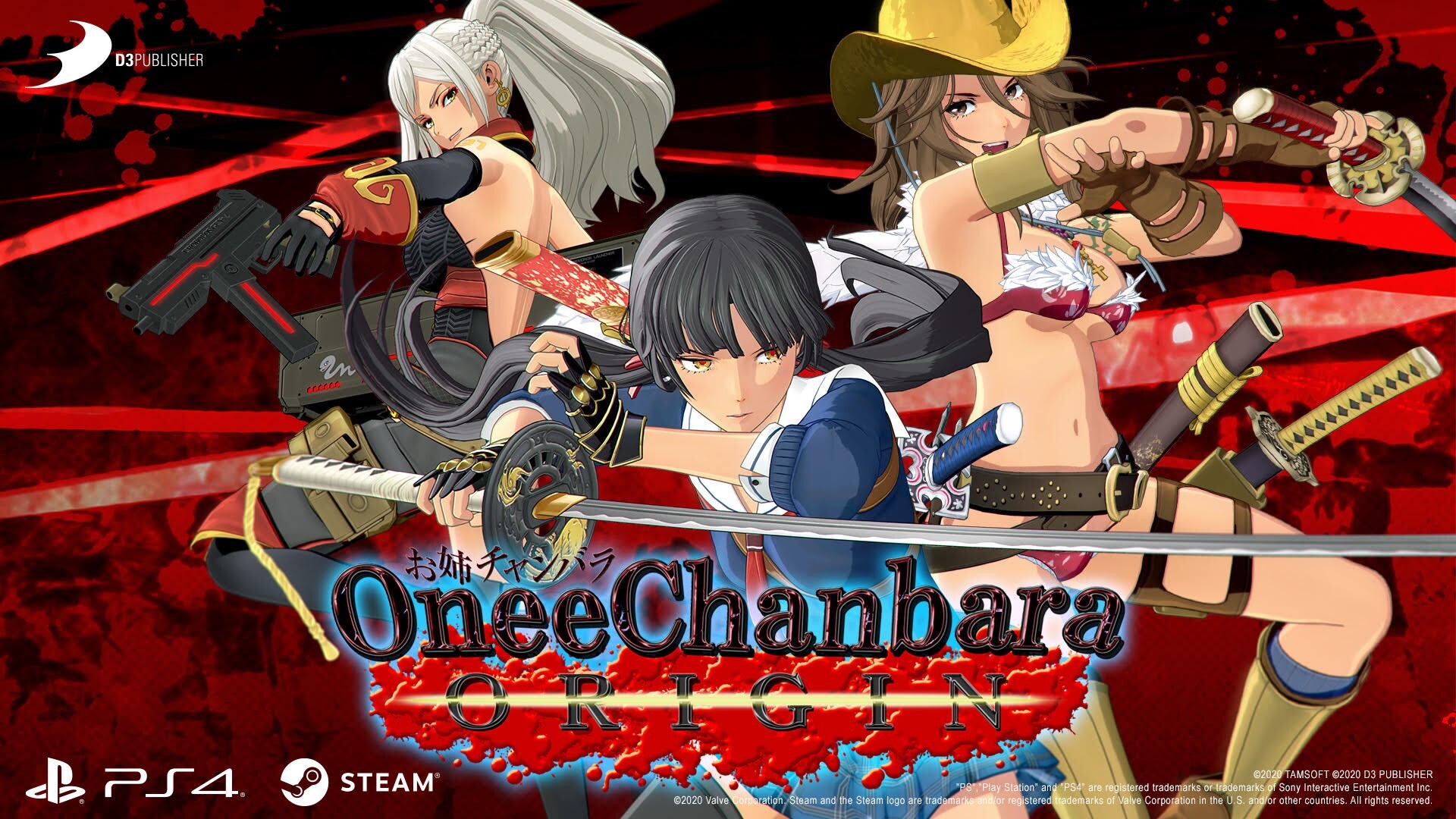 The OneChanbara series is what I would gladly label a guilty pleasure. It lacks the character development of Senran Kagura, and it doesn’t have the smarts of Gal*Gun. But at the end of the day, these hack-and-slash games with the zombie bikini slayers still deliver a lot of good dumb fun. For the first time ever, the non-Japan side of the gaming realm has been given the chance to experience the first two games in the series — The OneChanbara and The OneChanbara 2 — via a remake under the title Onee Chanbara Origin.

Plot-wise, the game’s story is pretty straightforward. Players control half-sisters Aya and Saki, as they roam the world searching for their father. Everywhere they go, there are armies of the undead waiting to be slaughtered. As such, the half-sisters must team up to rid the land of zombies, while at the same time search for clues as to where their father might’ve disappeared. 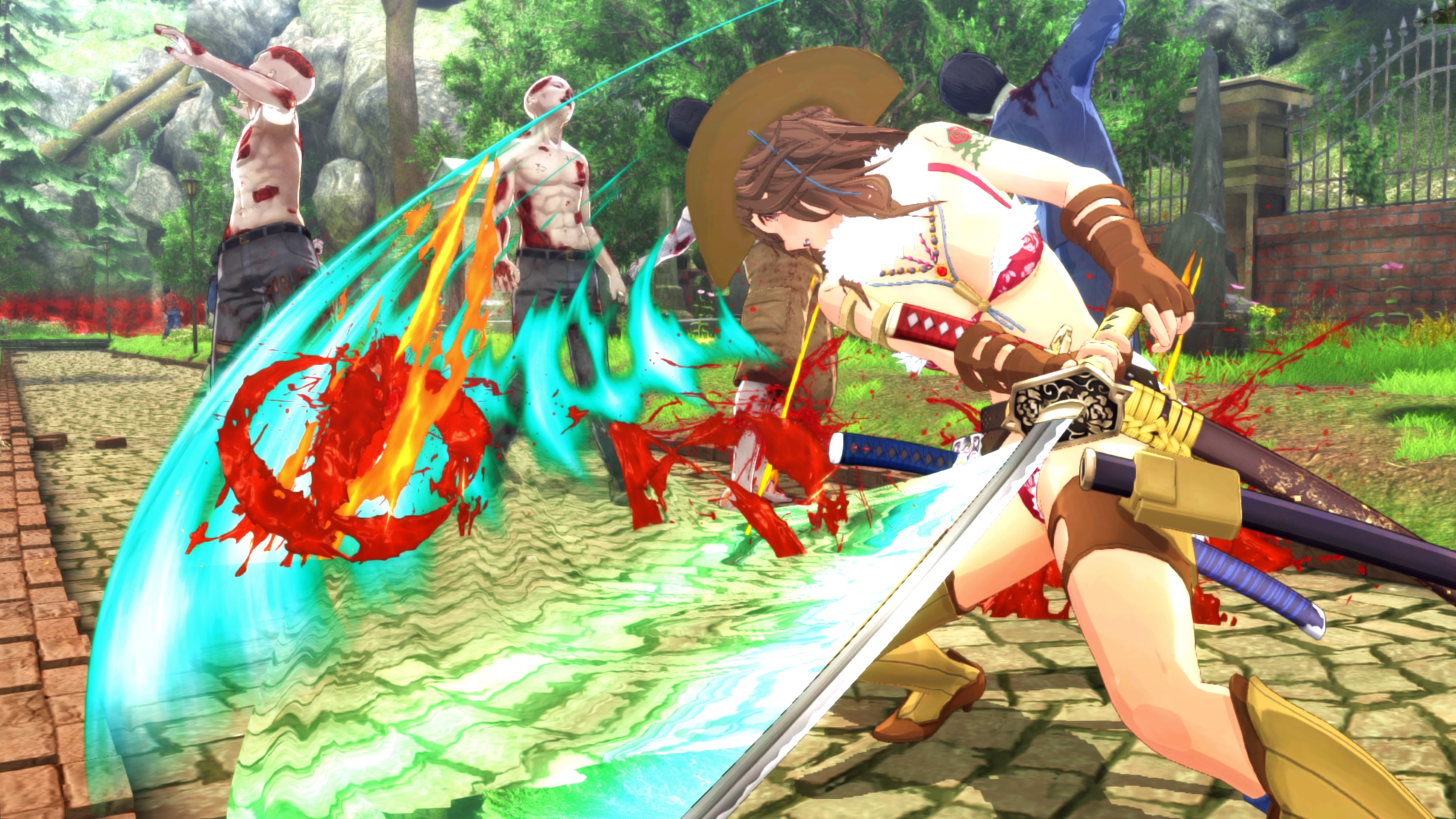 In the first half, players control Aya, as Saki is also among the missing. Throughout the search, Aya runs her blade through many a zombie big and small. With a mysterious woman taking control of Saki, Aya must find a way to snap her half-sister out of her bloodthirsty trance. Once that’s been completed Saki joins Aya’s side in their quest to bring their father back from wherever he went.

It’s a pretty by-the-numbers story, one that won’t be remembered by most soon after the end credits roll. But honestly, that’s okay, as OneChanbara has never been the kind of game series that focused on delivering a heartfelt tale. Developers Tamsoft had only one thing in mind: have cute girls killing zombies. And in that department, Onee Chanbara Origin delivers by the bucketload! 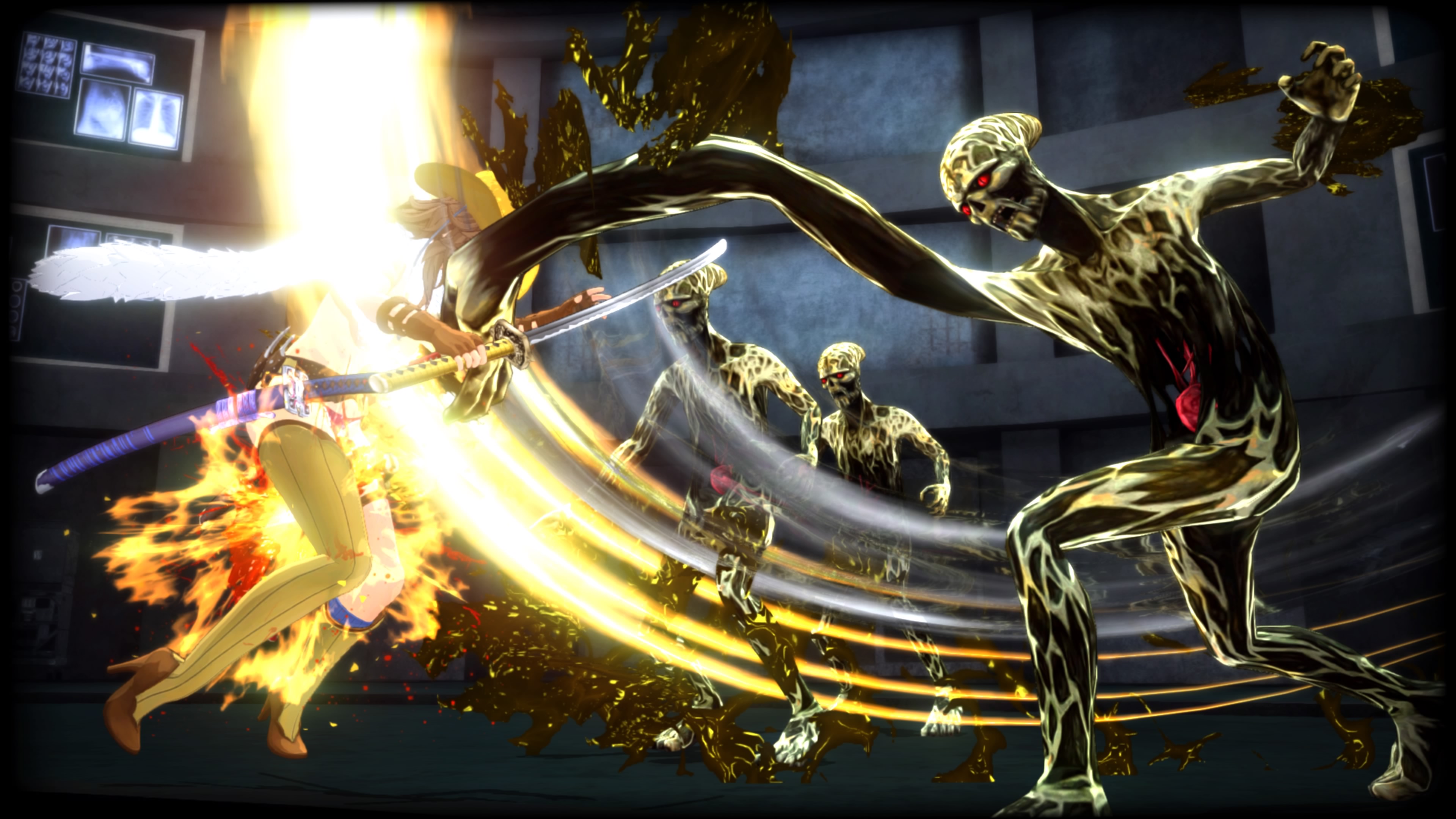 Watching as Aya or Saki take their swords to some zombie flesh is a delight in every way. From the way the blood showers over everyone to the sheer silliness of the outfits these characters are wearing, this game has no shame in what it showcases throughout its seven-hour campaign. When either of the half-sisters goes into Berserk mode, that’s when the real chaos begins, as you’ll be able to mow down the undead with a far greater ease. At the end of each level, players will be given a score and some in-game cash, which can be used to buy health items and rings that can boost healthy, stamina, and other aspects of Aya or Saki.

With the kinds of zombies you’ll be facing off against, you’ll find that not every one of them can be slayed in the same way. Some are your run-of-the-mill ones, whereas giant fat zombies will give you more of a challenge in the long run. Other zombies will even wield weapons or shields, resulting in players having to parry attacks in order to strike a fatal blow. All of these waves of zombies then lead to the big (and — unfortunately — weakest) part of Onee Chanbara Origin: its boss battles. 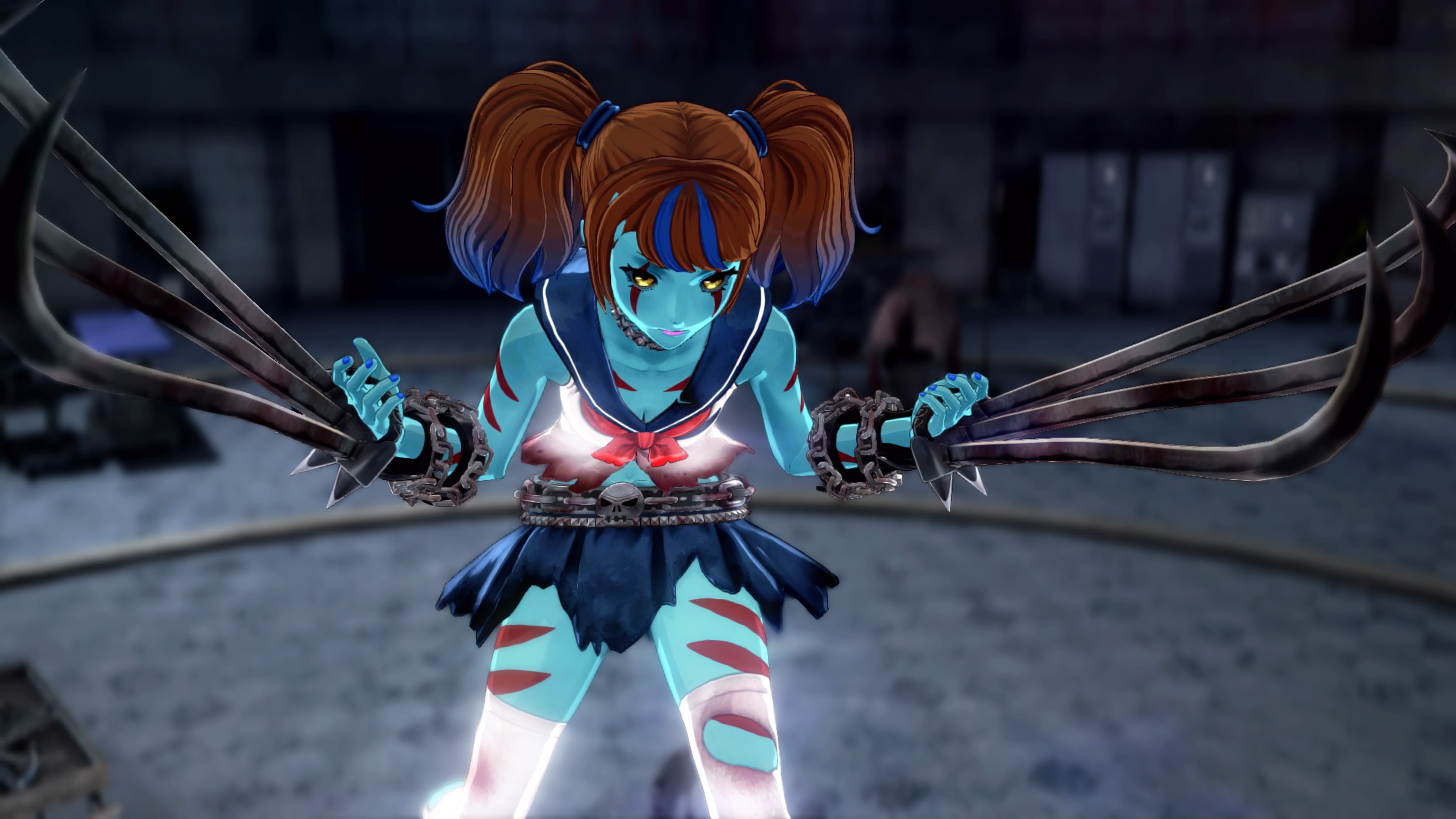 At first, the bosses this game throws at you seem like a good worthy challenge, be it a three-headed Venus Flytrap to a possessed zombie duo. But then the game drags its feet with the strength and stamina of these boss battles, with some only giving Aya and Saki one or two hits before they goes crazy and wallop you silly! As such, players will find themselves using plenty of health items to stay alive, as these moments can take a long 10-15 minutes to get done! If you were doing more than just using swords, then that would be an okay amount of time; but it’s repetitiveness makes them a drag!

One can say the same thing about the game as a whole, as Onee Chanbara Origin is nonstop hacking and slashing. For those who like these sorts of games (like myself), that’s okay; to others, they’ll probably feel drained with the constant button mashing and stabbing. Players looking for more weapon variety will more than likely look towards a Senran Kagura title than this one, as there’s really no change in gameplay mechanics throughout its run. (Once you unlock Lei, you’ll move to some gun play, but even that can be repetitive at times.) 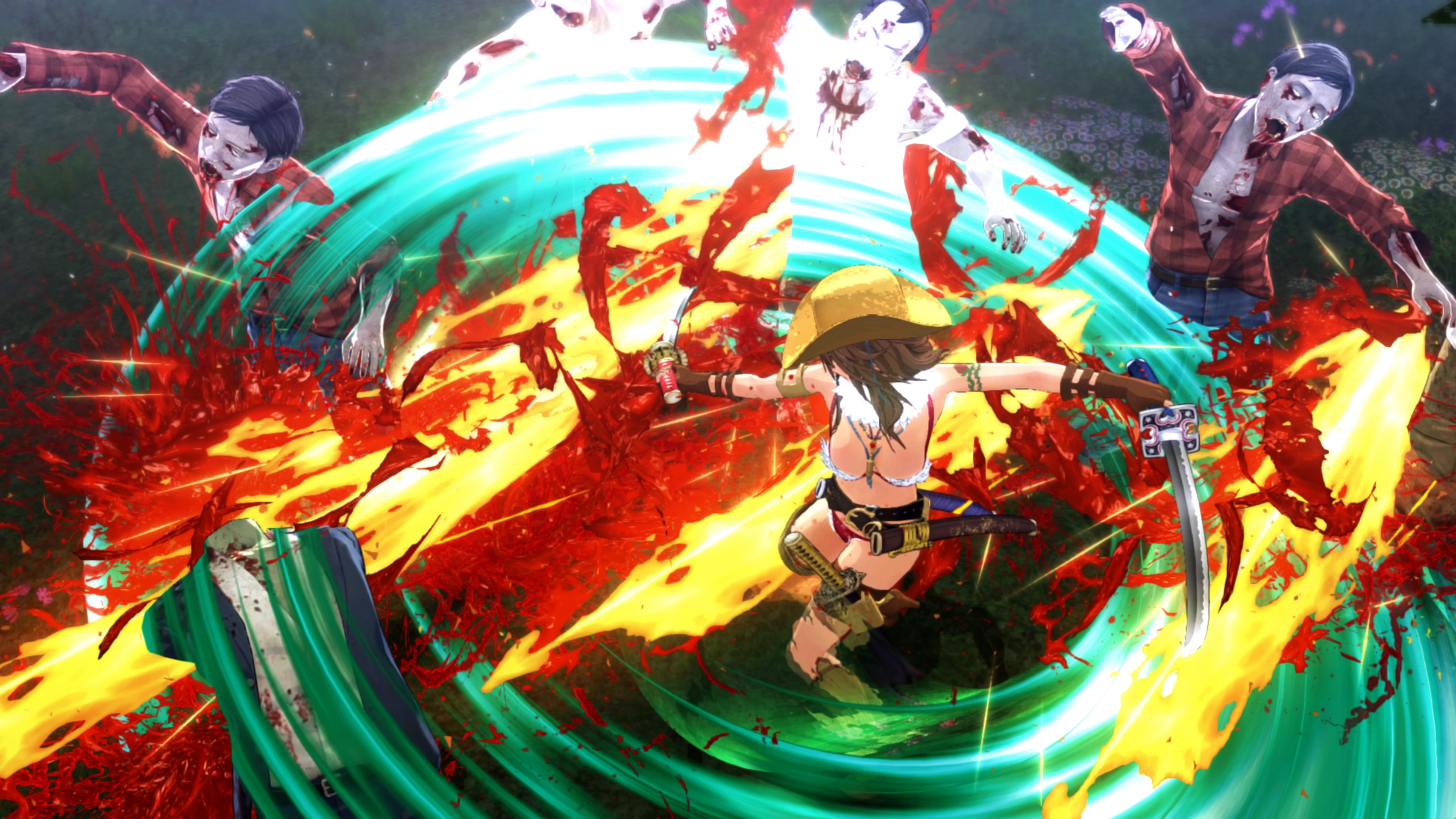 Another pain this game had was its camera view. Almost constantly, I had to stop my zombie-killing to adjust the view of the screen because a wall or bannister was in my peripheral vision. It gunked up my battle flow, sometimes making it hard to make big hit or kill combos. While it’s no dealbreaker by any means, it will leave some frustrated.

Visually, Onee Chanbara Origin looks better than it has every right to be. Although backgrounds and settings are somewhat generic, the characters of Aya, Saki, and the zombies look great in action! Flowing at a near-constant 60 frames per second, the action brings forth a delicious amount of sexy mayhem! Its voice-acting is also fun to hear, with veteran seiyuu Yoko Hikasa (Aya), Yu Kobayashi (Lei), and Hiromi Igarashi (Saki) bringing some humorous chatter to the zombie slaying. 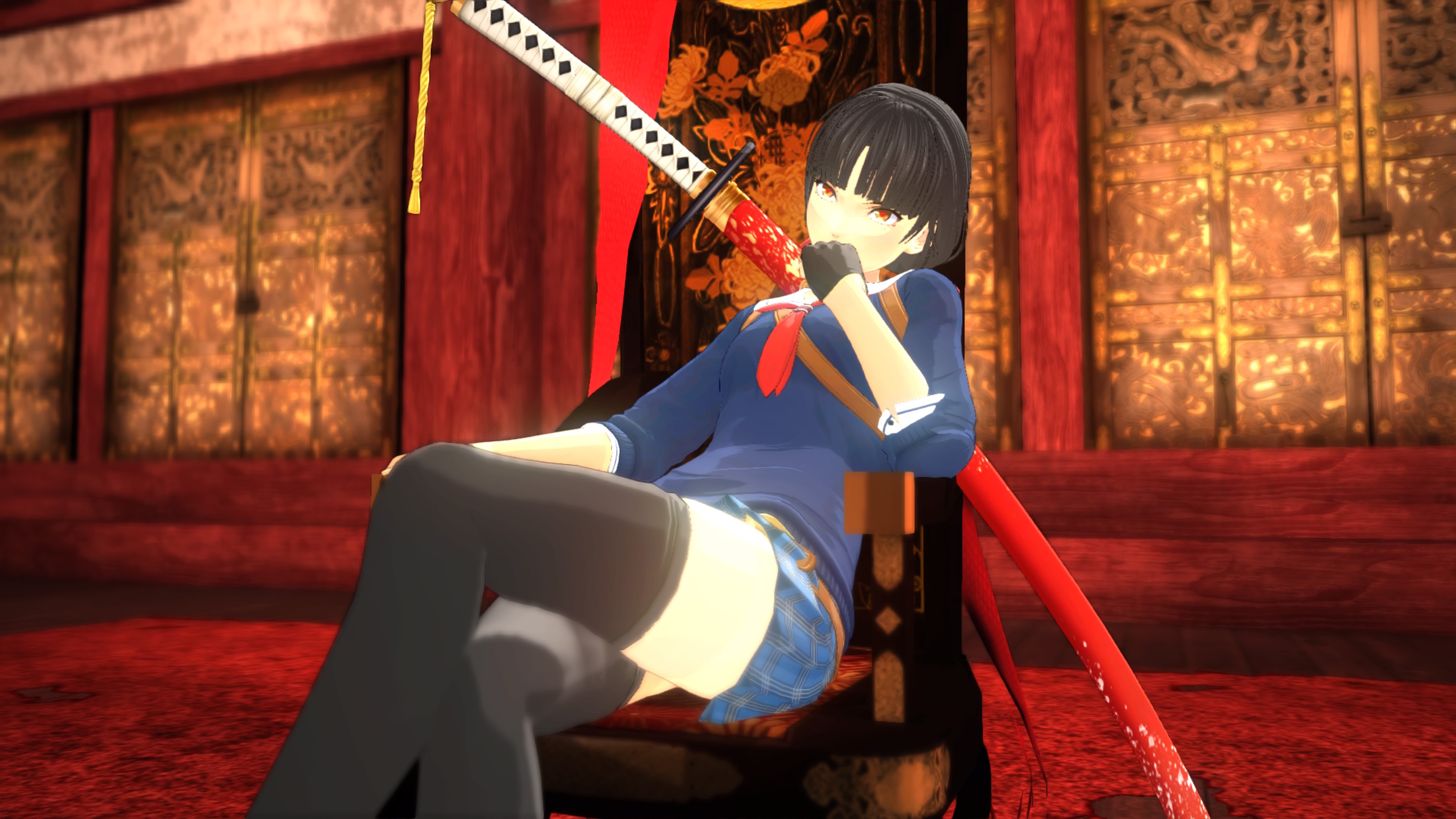 Once the campaign finishes, players can dive into practice mode and time attack for a little extra fun. There are bonus missions that can be bought via DLC, which will have you control Aya, Saki, and Lei through some side story arcs. Completing certain tasks will also give you bonus items, costumes, and art & sound to view in the Bonus area.

Onee Chanbara Origin knows what kind of game it is, and that’s all right in my book! It’s nonstop violence with cute anime-influenced characters, and while it can get tedious at times, there’s enough fun to keep you marching on through its campaign. It may not be for everyone’s tastes, but Onee Chanbara Origin delivers a great deal of zany zombie chaos for longtime fans of this series.

Promotional consideration provided by Scott Fry of ONE PR Studio. Reviewed on the PS4.