ANIME REVIEW | "Over The Moon" For One Adorable Couple 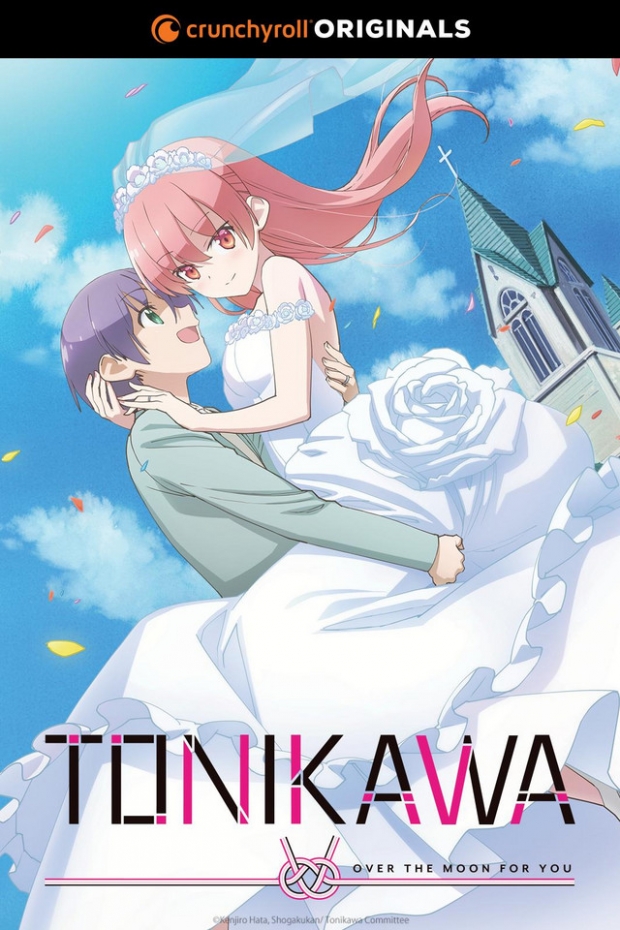 There are two things that author Kenjiro Hata does very well. The first thing is his ability to create incredibly cute characters, the kind that make you blush with melty sweetness running through your heart with just one glare of a pic. However, it’s Hata’s sense of humor that shines even brighter than his character designs, as he brings one barrel-full after another of side-spitting verbal and sight gags. His first work, Hayate the Combat Butler!, demonstrated these strengths well, becoming a shining beacon of anime comedy during the 2000s.

This now leads me to his latest manga to be adapted into an anime: TONIKAWA: Over The Moon For You. (In the US, VIZ Media has its original manga title listed as Fly Me To The Moon.) At first glance, it would appear that Hata was pushing more cuteness over silliness in this series, as evident by its first couple of episodes. However, those patiently waiting for Hata’s trademark hilarity to finally drop will be rewarded greatly, as the comedy hits peaks that not even Nagi Sanzenin could buy! 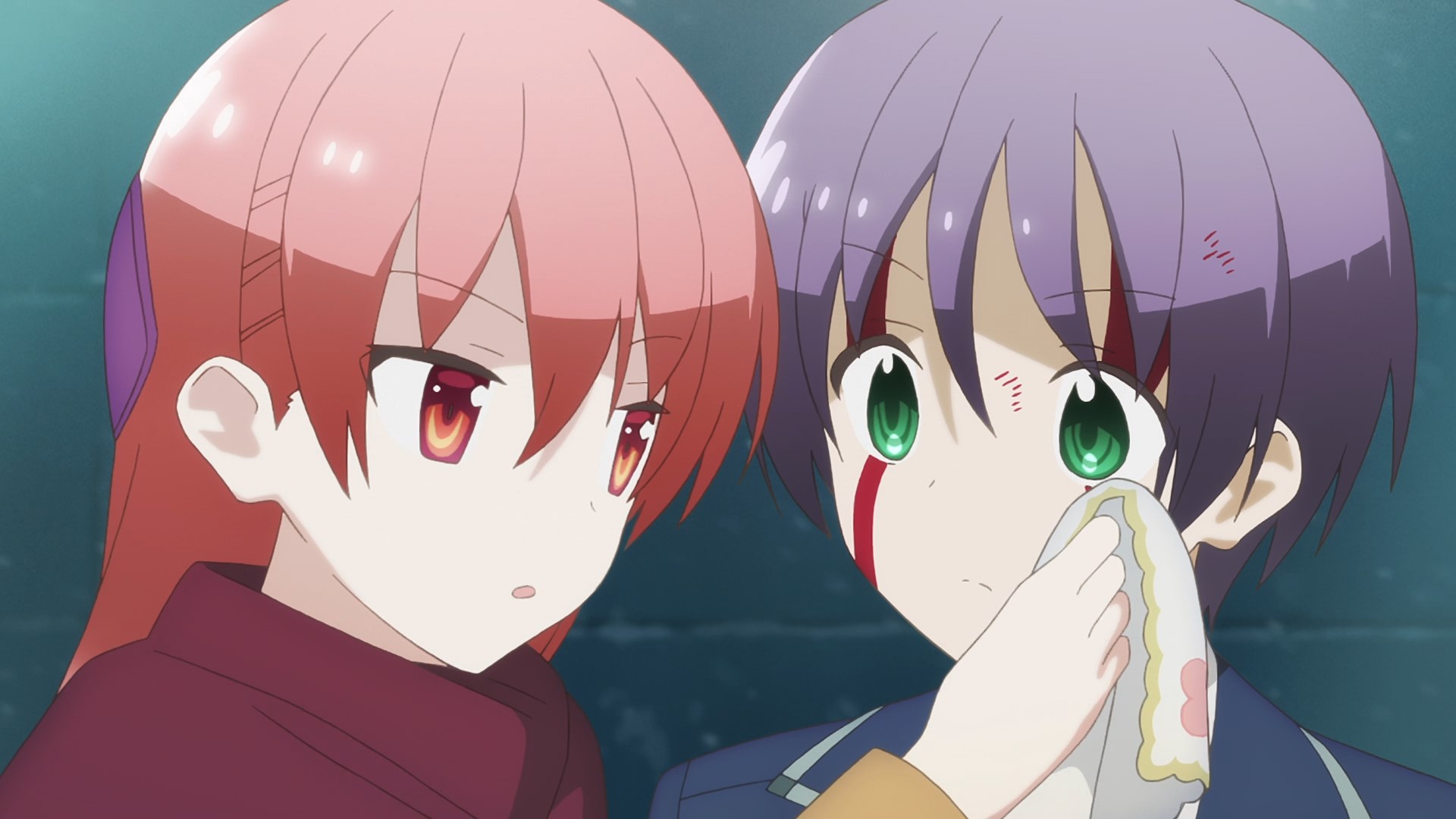 TONIKAWA follows Nasa Yuzaki (Junya Enoki/Zach Aguilar), who was given a name that brought forth ridicule by almost anyone who heard it. Swearing to become bigger than NASA itself, Nasa shoves all of his focus on studying and being a dutiful person in life. But everything changes when he’s smitten by a pretty girl, who saves his life when he walks into an oncoming truck. The girl, Tsukasa (Akari Kitō/Lauren Landa), instantly takes his breath away, and Nasa asks if he could date her. Tsukasa, with a smile in her eyes, tells Nasa that they can date if he marries her.

Flash forward three years later, with Tsukasa mysteriously vanishing from Nasa’s world. Just as he’s about to give up on her, Nasa’s life flips upside-down when Tsukasa appears at his doorway, with marriage certificate in hand. Almost without hesitation, Nasa and Tsukasa wed, and the two spend their time getting to know each other, their friends, and even family members. As the young couple become closer, the more they tend to open up about their hidden selves, Tsukasa included. 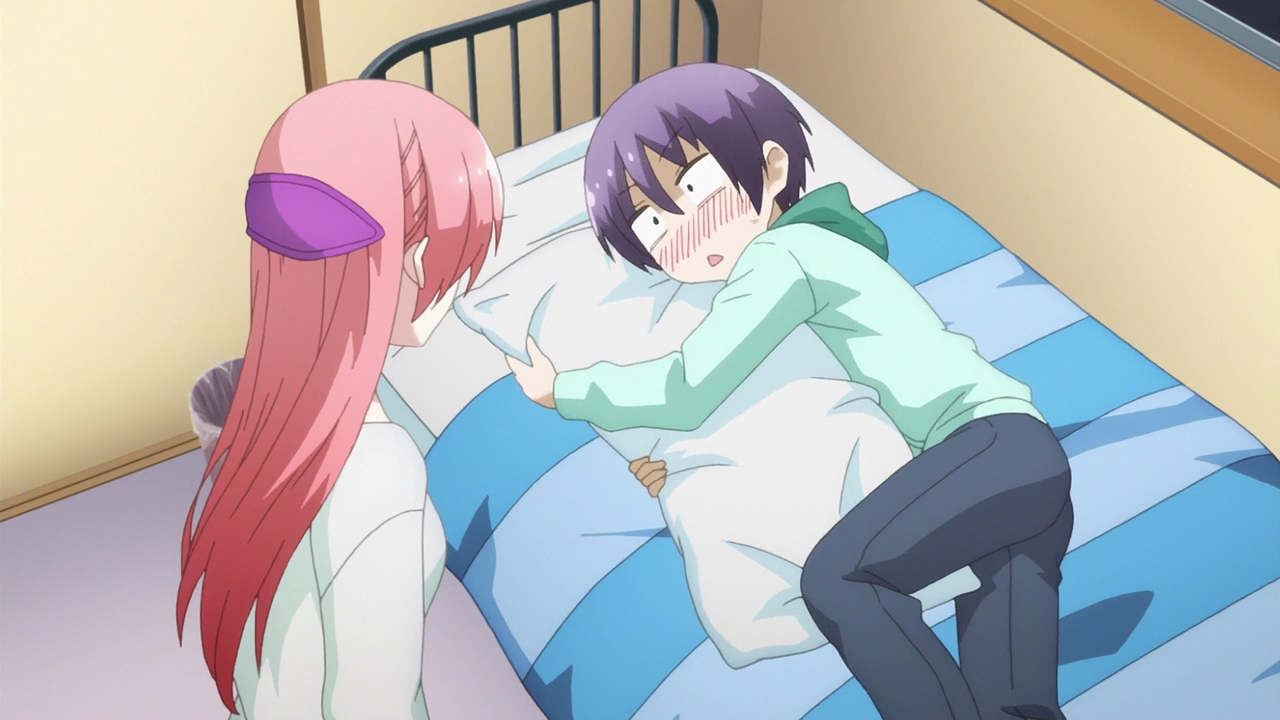 There’s a big mystery behind who Tsukasa really is throughout TONIKAWA, especially with the way she disappears from Nasa for three years. Even the way her “sister” Chitose (Konomi Kohara) dotes over her is presented in a way that more protective than straight-up stalker-y. However, despite her hidden past, Tsukasa’s attitude and mannerisms are that of a kindhearted wife, something that Nasa happily praises her for. This leads the anime to not only emphasize the couple’s cuteness, but also their dorkier personas.

And that’s what really draws the two characters together so well. The fact that they easily become blubbery shades of red over buying futons & clothes demonstrates how inexperienced either one of them are in the art of romance. Nasa’s internal monologues over doing what’s right for Tsukasa also ring a painful truth to anyone who’d do anything for the person they’d love, not to mention the thoughts of the more risqué things couples do! Not only is it endearing to see a couple portrayed like this, it’s also all kinds of goofy! 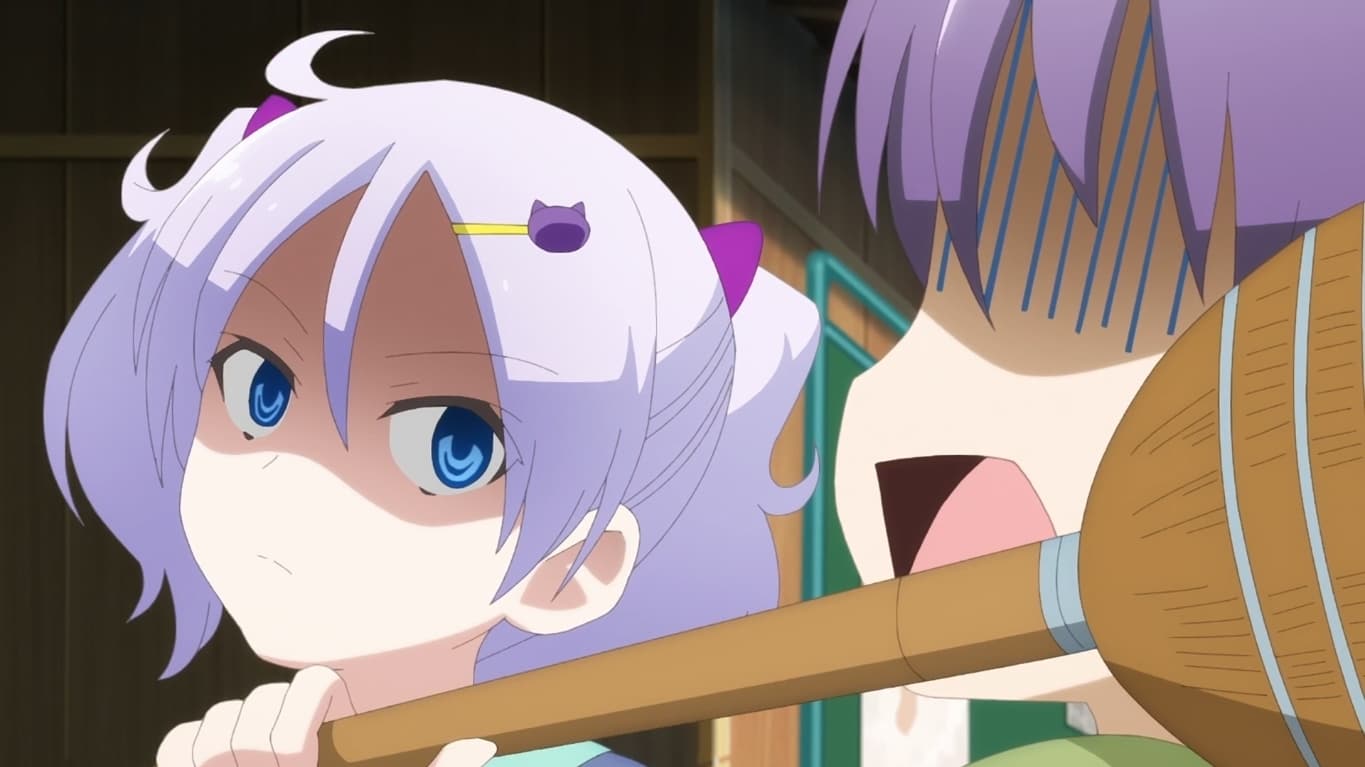 Said goofiness is what makes TONIKAWA work as well as it does. One of the show’s biggest scene-stealers is Kaname (Yū Serizawa), who constantly teases Nasa when he’s at her bathhouse. Whether it’s how he thinks about something perverse or — in the most extreme cases — pointing out how excited he can be just by seeing his naked manhood in the bath, her addition to the cast adds that level of comic genius that Hata’s work is best known for. When she pops onscreen, one must prepare their gut to burst from laughter.

Thankfully, Nasa and Tsukasa don’t need much aid from others to bring the laughs. The mere act of sightseeing or trying foods together brings out some silly expressions and not-that-common sense sort of thoughts regarding their personal tastes and thought processes. Neither Nasa or Tsukasa hold anything back whenever either does or say something questionable, showcasing how blunt they can be regarding certain life choices. This adds to their endearing sides, showcasing that even a minor snag can be conquered with the right amount of love in their hearts. 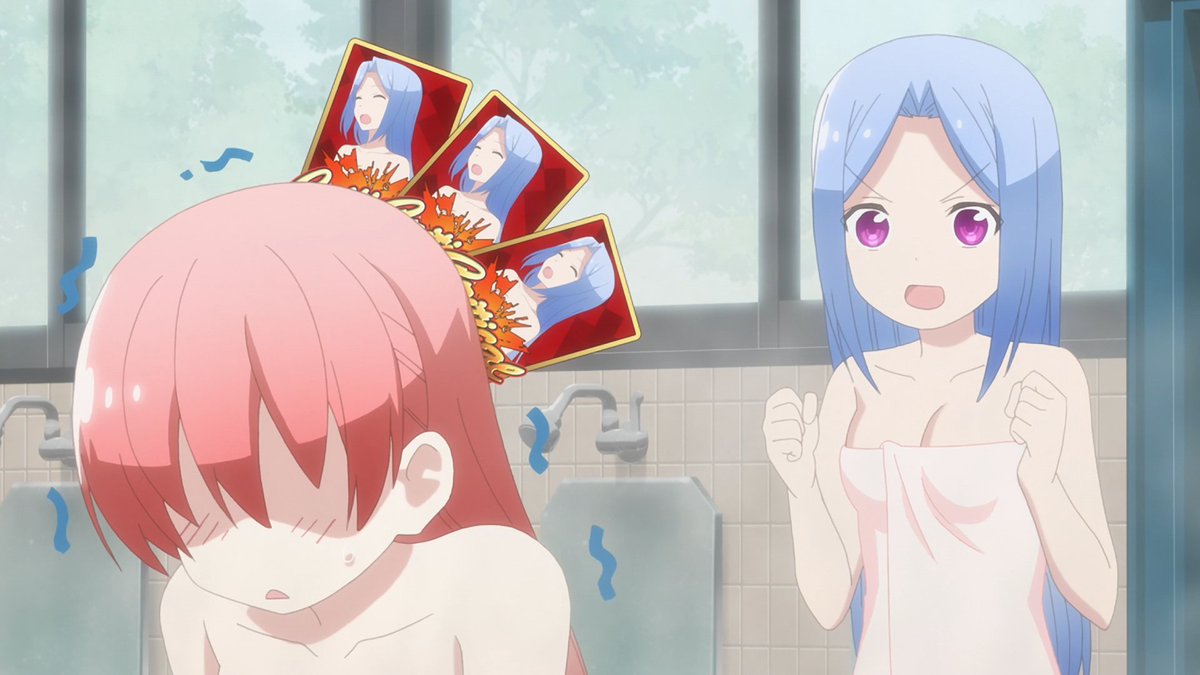 Whether you hear it in Japanese or English, the voices of Nasa and Tsukasa match well with their personalities. Both Enoki and Aguilar bring out many silly heartfelt one-liners, with enough cheese that’s as tasty as they are artery-clogging. Meanwhile, Kitō and Landa counter with their own sweet flavor-y performances, squeezing out an extra amount of dorkiness when the time calls for it. Although we haven’t heard the English version as of this writing, Serizawa delivers one gem of a comedic line after another as Kaname.

Animated by Seven Arcs (Sekirei, Dog Days), TONIKAWA stays true to Hata’s original character designs. There’s a good emphasis on their adorable features, and their comedic expressions when they become flustered will leave many people snickering. However, one cannot help but feel that its color palette is slightly dim for a rom-com. Despite its cheerful tone, the way certain scenes lack a proper brightness leaves me to question the decision behind why it visually doesn’t pop with the same sweetness as its emotional counterpart. 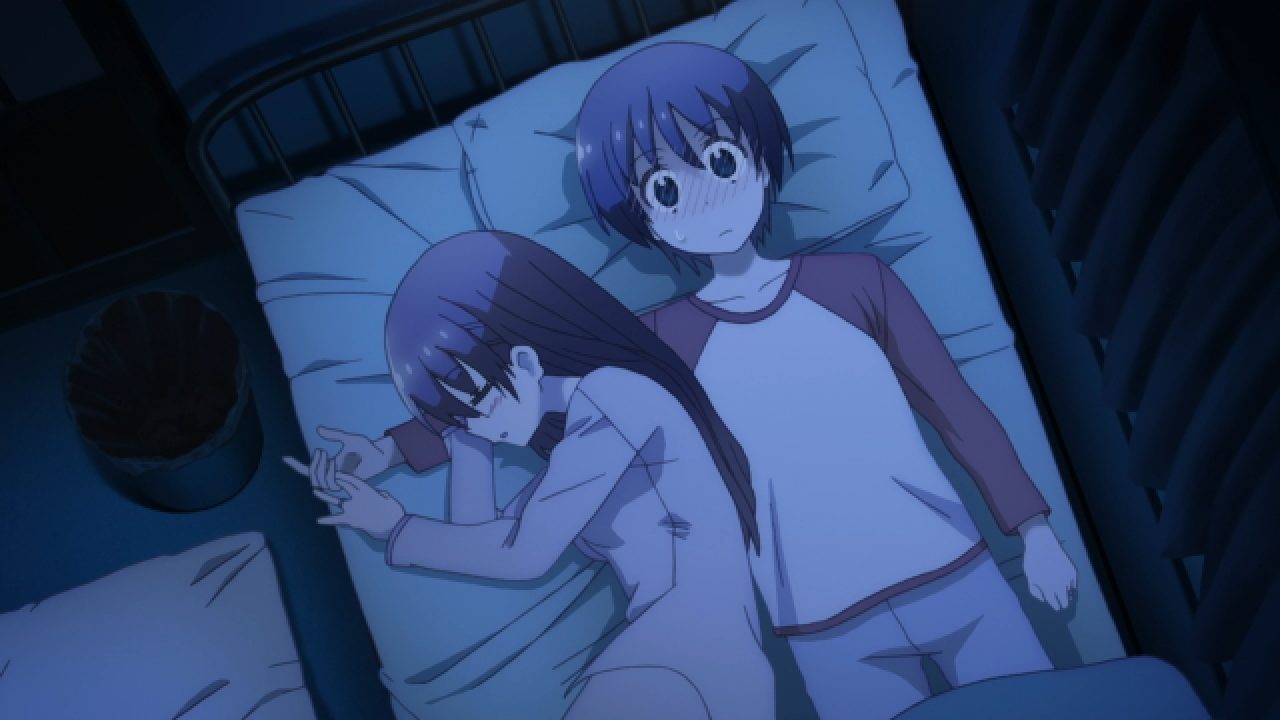 Endō’s score is slightly minimalistic for the most part, as it keeps the comedy in a sturdy area. One can easily hear inspirations from comedic songs and melodies throughout the soundtrack, especially a certain “Shave and a Haircut”-like sounding track during the most goofiest of moments. Opening theme “Koi no Uta” by Tsukasa’s seiyuu Kitō is not just one of this season’s most beautiful anisongs, but it has one of the dopest beats you’ll find in any show of Fall 2020. Series closer “Tsuki to Hoshizora” by KanoeRana is fairly decent, though it does match well with the show’s cute aura.

It may take TONIKAWA: Over The Moon For You a couple of episodes to fully get going, but — a lot like Kaguya-sama: Love is War — the hilarity hits hard and nonstop once viewers become accustomed to the story and its surroundings. Nasa and Tsukasa are adorable, endearing, and incredibly funny to watch in action. Yes, it may borrow some tropes from other rom-coms, but with Hata’s trademark magic sprinkled all over it, you’ll find yourself in hysterics over its gags, punchlines, and red-faced expressions. However, if there’s one thing that TONIKAWA does surprisingly well, it’s create a couple that anyone would aspire to be like. Basically, if you can be as happy as Nasa and Tsukasa in a relationship, then you’re doing all kinds of right in the art of romance!

TONIKAWA: Over The Moon For You can be viewed on Crunchyroll and VRV. Episodes 1-9 were observed for this review. Promotional consideration provided by Ellation.

2 months ago No Comments