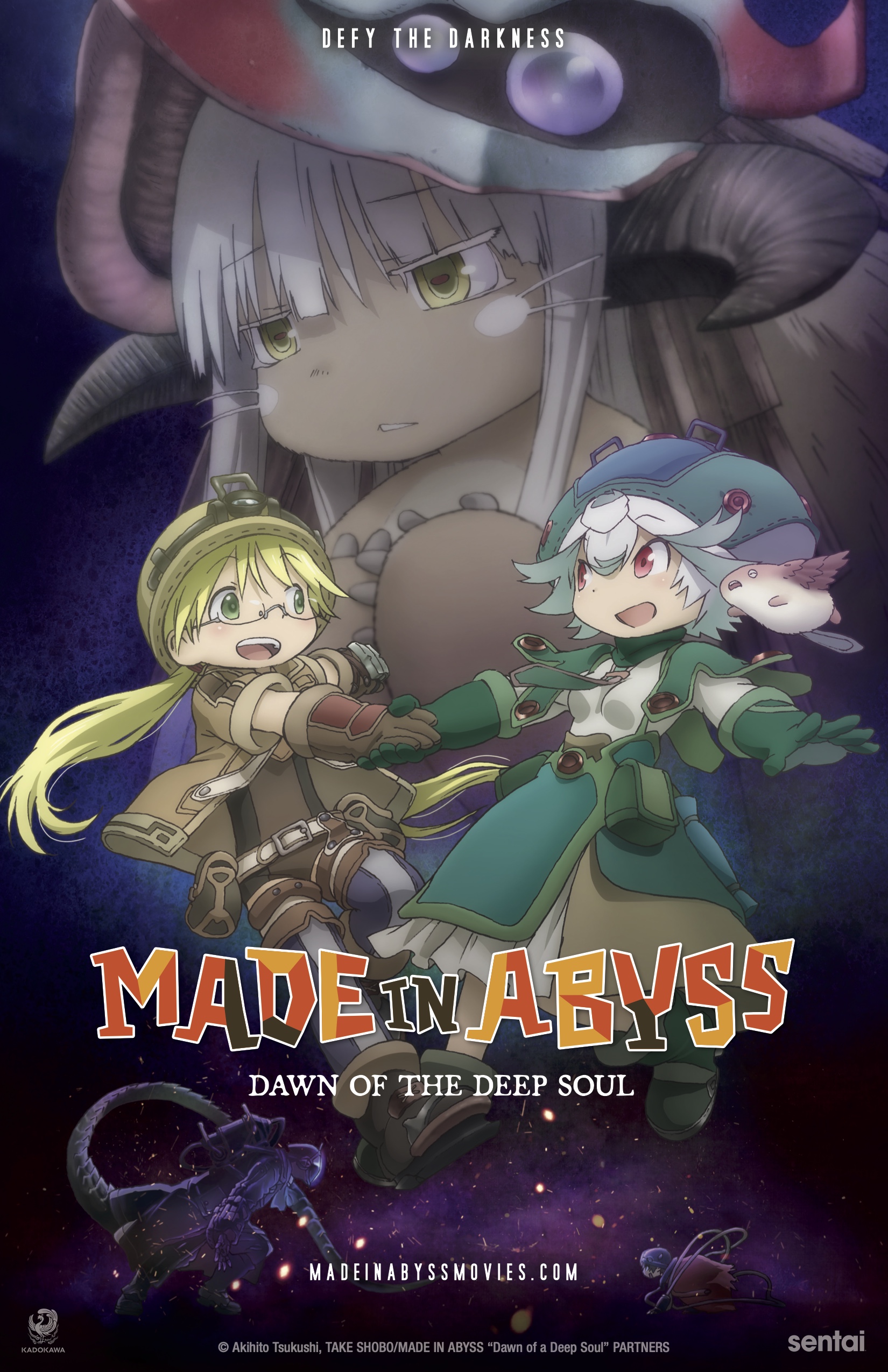 Out of all the anime that came out in the 2010s, none delivered something as grand, dark, and whimsical as Kinema Citrus’s Made In Abyss. An adaptation of Akihito Tsukushi’s manga, the story of Riko (Brittany Lauda) and Reg (Luci Christian) as they search for the former’s mother is a harrowing adventure tale that gut-punches you when you least expect it. It’s the epitome of an anime masterpiece, one whose two compilation films Journey’s Dawn and Wandering Twilight surprisingly capture well the importance of these two’s journey down the abyss. Now, the time has come for a new adventure to arrive for this duo, in the form of Made In Abyss: Dawn of the Deep Soul.

Now joined by Nanachi (Brittney Karbowski), Riko and Reg attempt to find their way towards the abyss’s sixth layer. But a being from Nanachi’s haunted past stands in their way: Bondrewd (David Harbold), who is now joined with a mysterious daughter named Prushka (Avery Smithhart). Back at the Idofront, Bondrewd’s experiments continue, leading Riko, Reg, and Nanachi towards new dangers, threats, and — above all — a disturbing reveal.

Unless you are familiar with the original source material, there is absolutely nothing that will prepare you for what you’ll witness when watching Dawn of the Deep Soul. Although the TV series went down some dark and disturbing paths, the film pushes those boundaries in ways that will make you unable to blink throughout its 100-minute runtime. If you became squeamish during the original story, then I would highly advise you to back away from this third film. Scenes of children being tortured, ripped apart, and transformed into horrifying monstrosities will no doubt have some people unable to persevere forward with what this film delivers.

If you can deal with some of these disturbing elements, then consider yourself one of the fortunate ones. Out of all the big screen adaptations of anime television, I’ve never seen one go the lengths that Made In Abyss has with this film. The emotional weight that is presented in the actions of Riko, Reg, Nanachi, and even Prushka are some of the most jaw-dropping things I’ve seen in any anime film, rivaling even some of the stuff in Studio Ghibli and Studio Chizu’s library. And one of the key elements that makes this film so powerful is its antagonist: Bondrewd.

While he was introduced in the main series, Bondrewd comes fully to life in Dawn of the Deep Soul. His wickedness comes in waves via his soft-spoken voice, whereas his actions make him one of the most despicable characters to ever grace an animated film. It’s his treatment of Nanachi and Prushka that makes him a monster, with what he does to Reg showcasing the psychotically disturbed individual that he truly is. Harbold’s performance in the dub is commendable, presenting viewers with a new kind of diabolical that not even the finest Disney villain voice acting has ever presented.

Taking Made In Abyss to the big screen, Kinema Citrus goes all out with its production. While the two compilation films that spliced up the TV series delivered some great animation, the action in the third film one-ups all of that. The battles between Reg and Bondrewd are filled with gorgeous details, as limbs and debris fly while the two trade blows. But perhaps the most beautiful you’ll witness is the opening scene with the Flowers of Fortitude. What occurs here is an amazing metaphor for what is about to happen to these characters in this adventure, as the garden goes from being a thing of beauty to a display of destruction.

Composer Kevin Penkin crafts a score for Dawn of the Deep Soul that can only be described as Oscar-worthy! It can be calming and soothing during some of the downtime the characters have, but transforms into a bombastic and lively affair when the screen flashes with either disturbing turn-of-events or impressive action sequences. The string compositions give chills in ways that amplify the emotional elements, with some pieces feeling right out of the playbook of Nick Cave & Warren Ellis. Teaming up with MYTH & ROID, the end theme “Forever Lost” mirrors the tone and heartache that this film offers, demonstrating both Penkin's songwriting craft and hotaru & KIHOW's vocal prowess.

After the credits roll, viewers will be treated to two Marulk’s Daily Life shorts, which are the complete opposite in tone. Making up for the darker elements of the main film, the comedic elements of the first short is both heartfelt and sweet. Meanwhile, the second short brings things back to the darker themes of the featured presentation, but manages to wrap things up in a cutesy manner. While they have nothing to do with the main film, they certainly are entertaining enough to be welcomed into its overall viewing.

Made In Abyss: Dawn of the Deep Soul is a work of cinematic and animated genius. It is by all means not a film for everyone, as it can reach some very Ari Aster-like levels of disturbing. However, those who wish to dive deeper into the same abyss as Riko, Reg, and Nanachi will find this journey memorable in every single way. As the ending flashes a “To Be Continued”, one hopes that we’ll be reunited again very soon with these strong and determined adventurers.

Made In Abyss: Dawn of the Deep Soul is now in theaters, with virtual screenings beginning on September 18th. English dub observed for review. Promotional consideration provided by Tom Helberg of Sentai Filmworks.