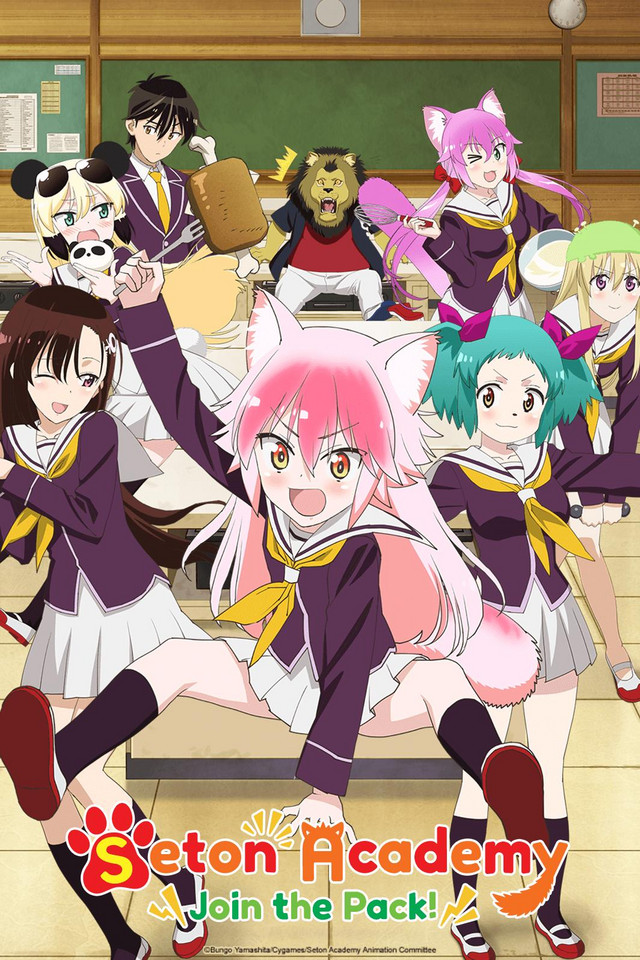 Back when I was in college, Cartoon Network aired a series called My Gym Partner’s a Monkey. Despite some acclaim, the cartoon wound up being unmemorable, with the only thing that sticks out from it in my mind being that its soundtrack was exactly the same as the HBO hit Curb Your Enthusiasm. However, I bring this show up because — in spirit — this season’s Seton Academy: Join the Pack! has a very similar premise to My Gym Partner’s a Monkey. The only difference between these two shows is the fact that I’ll probably remember this anime more than its American quasi-predecessor.

Based on the manga by Bungo Yamashita, Seton Academy: Join the Pack! places its focus on the title’s namesake: a school for animals. Within the student body is the human student Jin Mazama (Haruki Ishiya), who has a slight distaste for animals due to a bad encounter with three bears when he was younger. A small Hokkaido wolf named Ranka (Hina Kino) is in search of a pack of her own, forcibly bringing Jin and the one other human Hitomi Hino (Yume Miyamoto) into what would be dubbed a “cooking club”. As more animals join the foray, Jin’s distance between him and the animal kingdom becomes smaller than he will kindly admit. 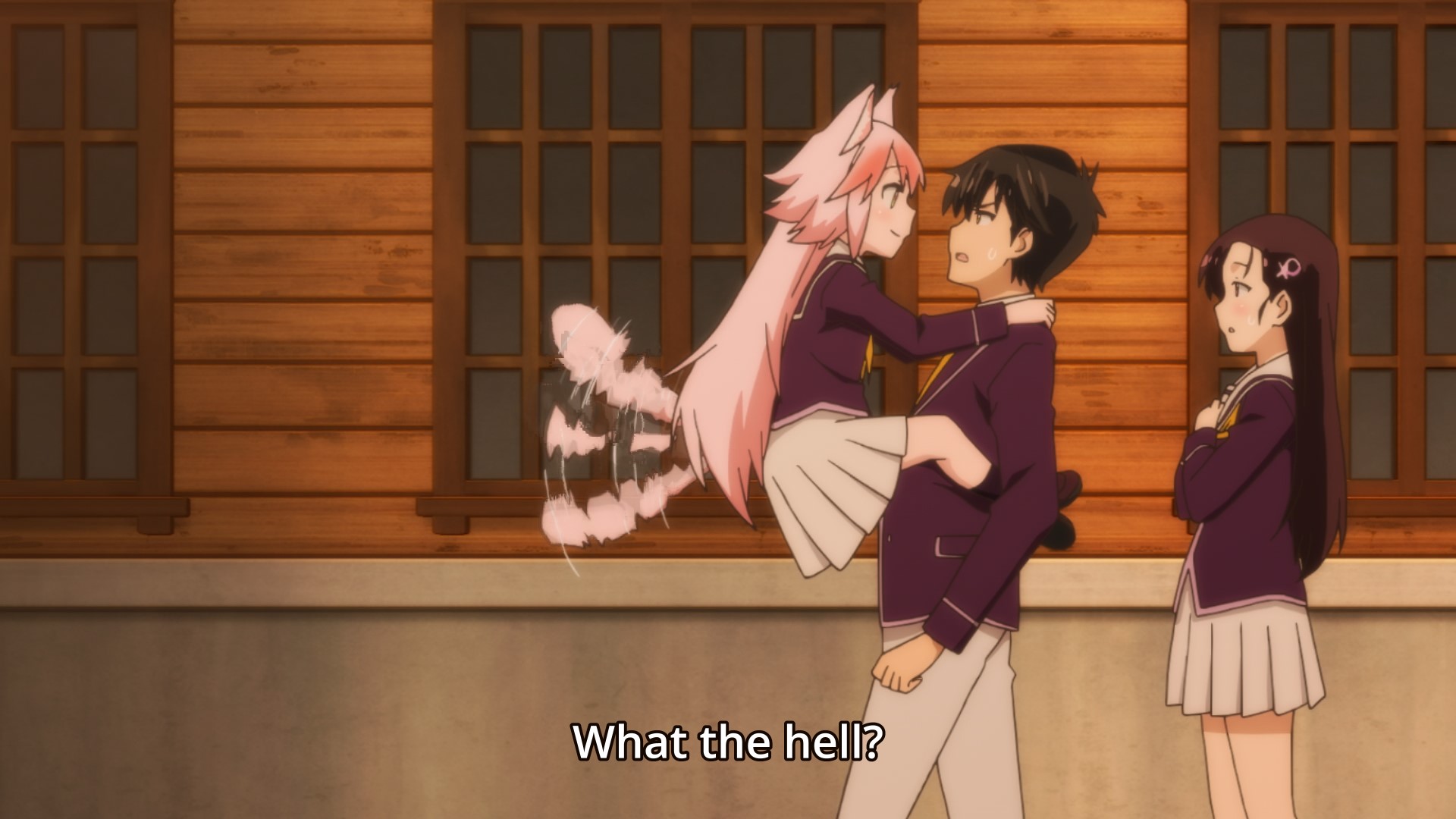 First to join the cooking club is the koala girl Yukari (Misako Kuno), who discovers Ranka’s awful cooking reminds her of what her mom used to “make”, with the punchline being too silly to spoil here. Sloth girl Miyubi (Konomi Kohara) is brought in as well, despite her tendency to die when putting in a bit too much effort. A world-famous panda girl Mei Mei (Yū Serizawa) also becomes a part of the crew, albeit after Jin berates her in ways that an endangered creature isn’t legally allowed to be. Keeping a close eye on the whole crew is the Student Council President Miki (Yukari Tamura), a naked mole-rat who finds it disgusting when she sees people with clothes on.

The student body is filled with many kinds of creatures, with the males having genuine features and the females being more human-based with animal ears. (It is kind of funny that, despite the audience being able to tell the difference, the animals themselves can’t.) But what makes Seton Academy stand out is how deep Yamashita and the series script adaptor Shigeru Murakoshi go with adding real animal traits to all the characters. From Ranka’s welcoming greeting via face-licking and the lion King Shishino (Tomokazu Sugita) having his own harem, the traits of each character mirror those of their actual counterpart. 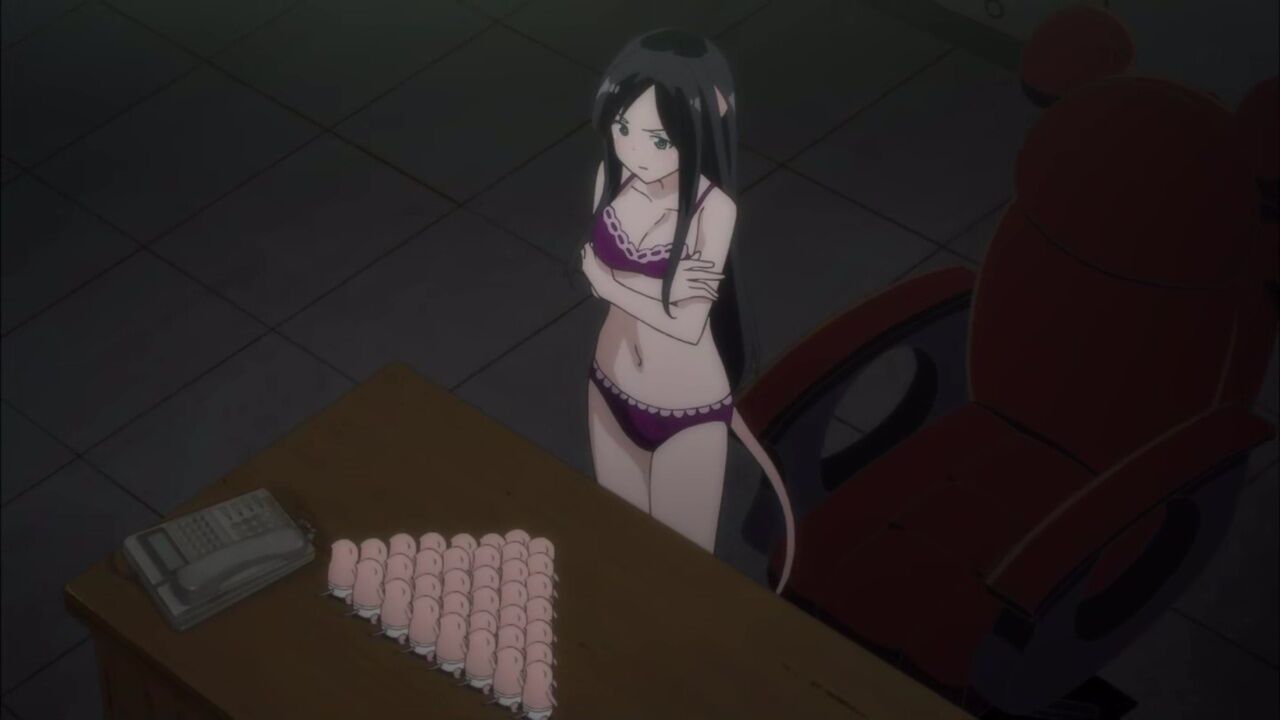 This “realism” plays hugely in the favor of the show’s humor. Miyubi constantly dying after going against her normal pace -- which happens in the wild -- is as great of a running gag as old-school South Park episodes where Kenny kicked the bucket in some hilarious fashion. Honey badger Tel (Mariko Honda) uses her real-life thick coat to make herself invincible to even the toughest male opponent, resulting in a shocking awe from her classmates when she walks away smiling and unscathed. Miki struggling in class and halls to keep her clothes on demonstrates a good usage of visual gags revolving around reverse fan-service, where the character feels cleaner without her school uniform on than with it.

But there are some gags that can walk the line between funny and going a tad too far. One such premise involves Iena (Minami Tsuda), a spotted hyena who has a male personality and a female form. The reason behind their masculine attitude is very funny (and one that was also touched on by this season’s cult sensation Interspecies Reviewers). Sadly it’s how her classmates react to her jumping between acting male and female that can be considering a wee bit transphobic amongst certain circles. However, the external and internal conflicts are resolved in a fashion that makes some of these somewhat uncomfortable moments a bit more tolerable.

That leads me to the greatest strength of Seton Academy: its showcase of why it’s important to be happy in one’s place and in one’s skin. Iena finds their happiness after realizing which gender they’re most comfortable in, with the rest of the cooking club demonstrating a good dosage of acceptance and heart. The whole cooking club dynamic is also a means of creating a sort of pack of animals (and humans) who don’t have a place for themselves. As such, Ranka’s somewhat selfish reasons for wanting Jin and Hitomi in her pack evolve into something far more meaningful and touching.

With that being said, Jin’s usage as the main male protagonist doesn’t really add mileage to the show as a whole. In hindsight, he’s there to act as the audience, reacting with zero filter to the craziness that encircles him. Heck, even Hitomi gets more depth and character development than the human character we’re supposed to be focused on. It’s a small setback to an otherwise well-written show, one that could hypothetically be fixed as the series continues onward. 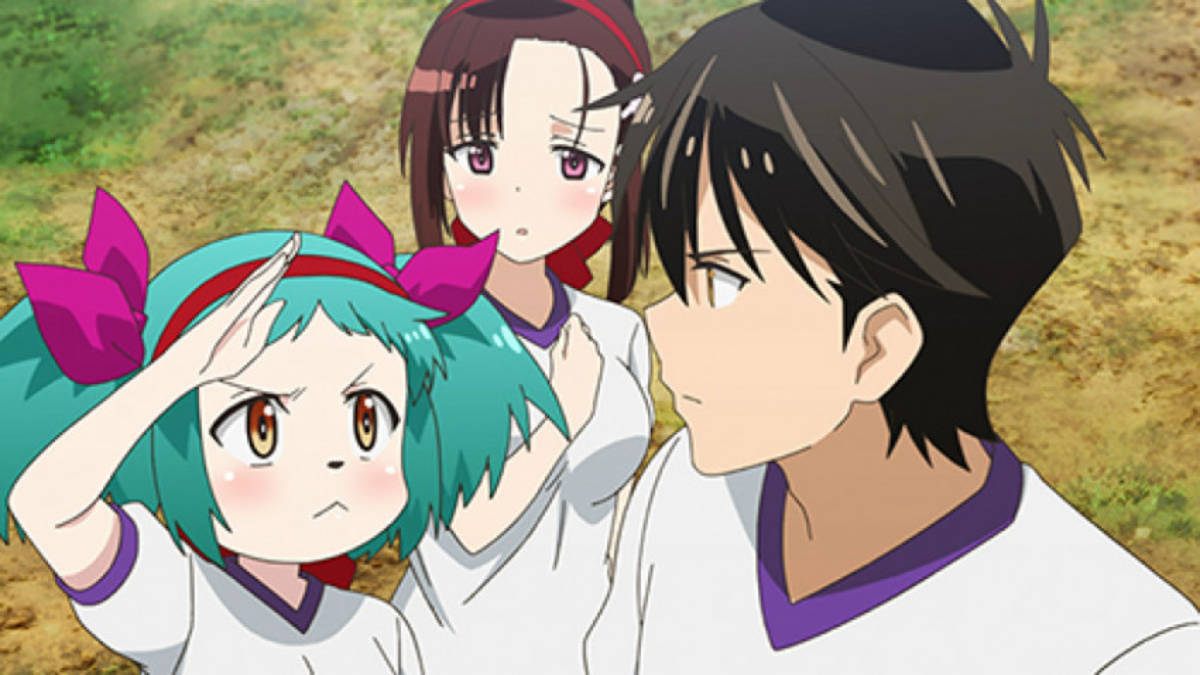 Animated by Studio Gokumi (ENDRO!, Kin-iro Mosaic), Seton Academy shines brightly when the physical comedy is in full swing. From Tel’s stinky super power and the Field Day events, the parts that look great are when something exciting or funny are happening. When the action slows down, it easy to see some of the animation’s rough edges, especially when it comes to character’s faces and movement.

Thankfully, the voice actors carry the show’s weight with ease. Hina Kino keeps being the voice actress to watch closely, as her antics as Ranka are as adorable, hilarious, and rage-filled as her portrayal of Hanako in Asobi Asobase. Despite adding little weight to the show, Ishiya’s Jin can deliver a zero-filtered punch and banter with the right amount of comedic timing. Tsuda jumps between male and female personalities with great Jekyll & Hyde precision as Iena, demonstrating the voice actress’s range in performances. While she has just been added to the cast recently, Mariko Honda has already made an adorable and wild mark as honey badger Tel, thanks in part to her cuteness and unexpected punchlines. 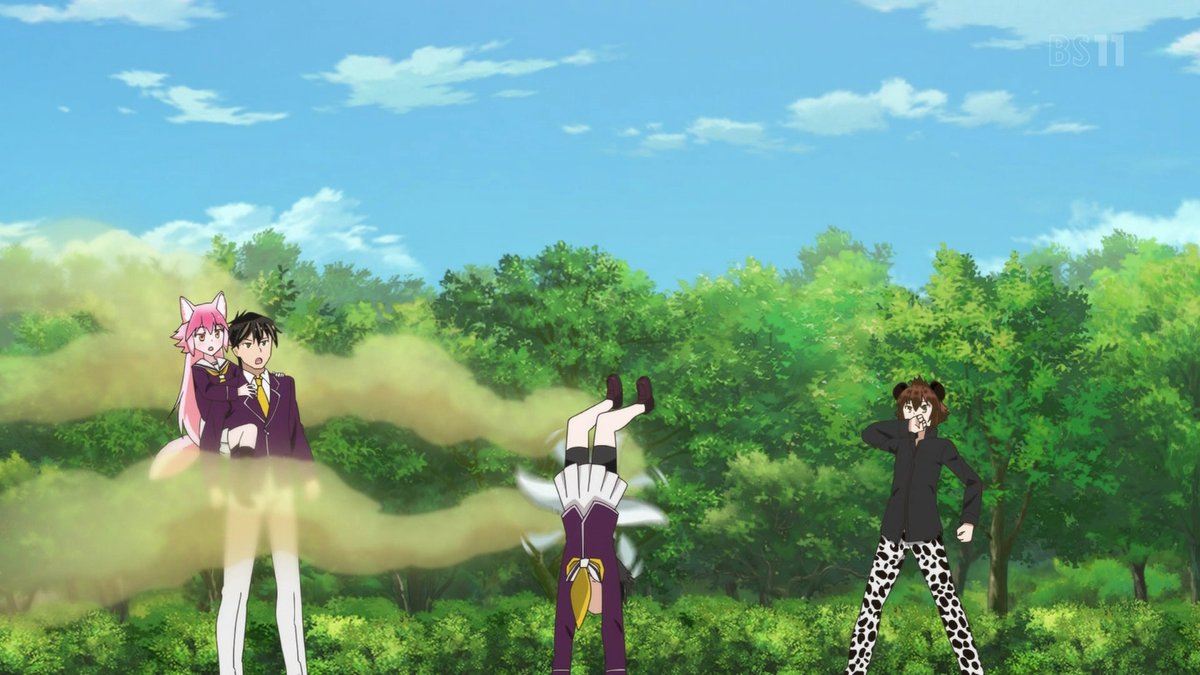 The trio of Yōsuke Yamashita (That Time I Got Reincarnated as a Slime), Yusuke Katō (How NOT to Summon A Demon Lord), and Tomoya Kawasaki (Wotakoi) put together a soundtrack that’s as lively as the animals that reside in the school yard. These melodies fit greatly with the anime’s comedy, adding an extra oomph to the gags happening on screen. Opening theme “Gakuen Sōkan School” is handled by the main cast, delivering a catchy and stomp-friendly tune that will make it hard not to hum soon afterwards. However, Kino steals the musical spotlight with her ending theme “Ookami Blues”, a song so cute that it needs to be heard to understand why it’s the best anisong of the Winter 2020 season. (Lord knows I listened to it hundreds of times to concede that fact!)

Seton Academy: Join the Pack! is one of Winter 2020’s best anime surprises. Filled with top-notch comedy and a knowledge of animal life, the tale of a pack of misfits taking class day-by-day has become the underdog highlight of the current Crunchyroll roster. Even if you know a Ranka face lick will be required, it’s easy to hop onboard and become one with the cooking club found within the halls of Seton Academy.

Seton Academy: Join the Pack! can be viewed on Crunchyroll and VRV. It has been licensed by Crunchyroll. Episodes 1-7 were observed for this review. Promotional consideration provided by Ellation.