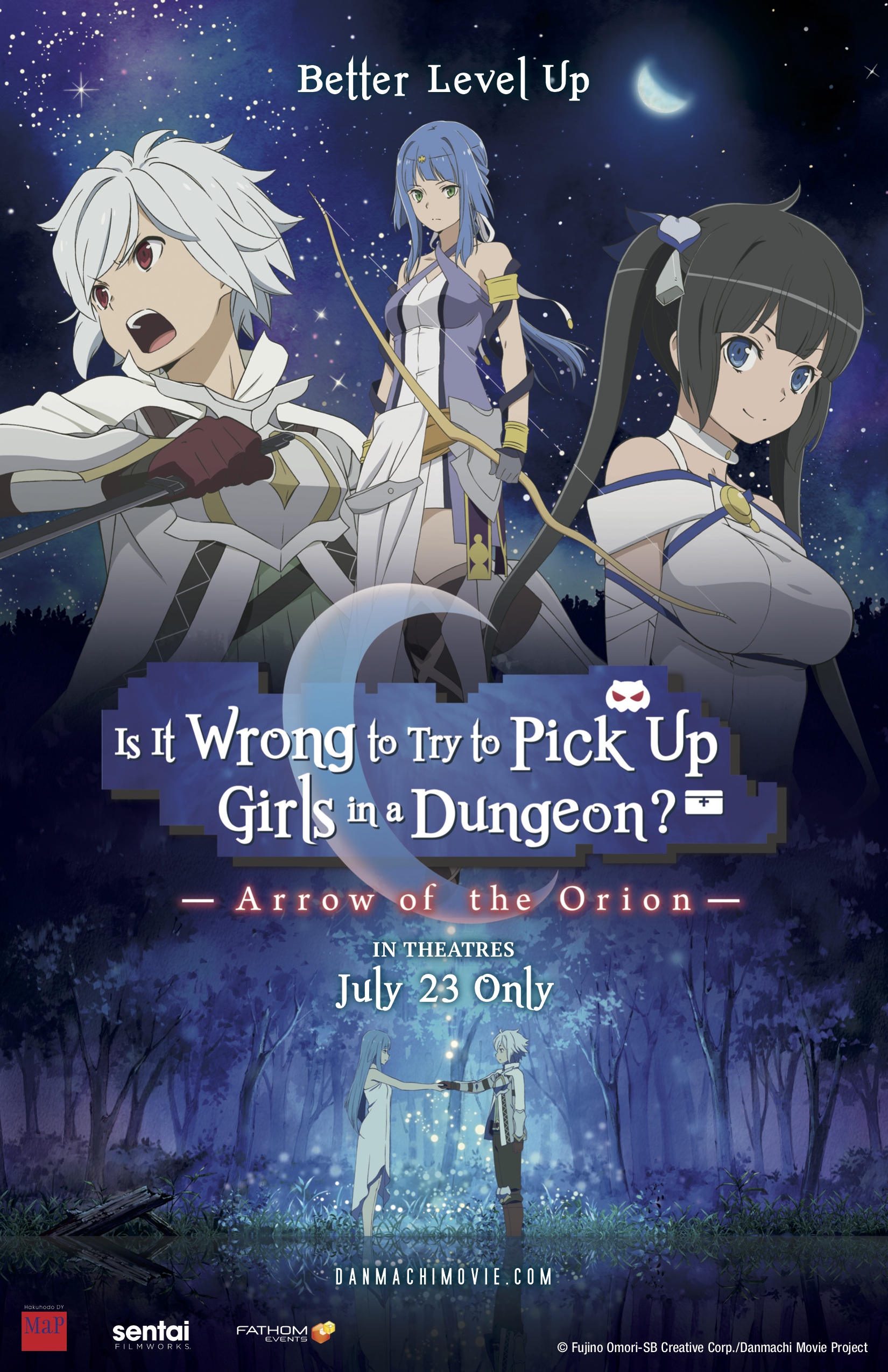 Despite its questionable name, 2015’s Is It Wrong to Try to Pick Up Girls in a Dungeon? (or DanMachi, as its Japanese name is shortened to) delivered one of the most satisfying fantasy anime in recent memory. Watching as Bell Cranel (Yoshitsugu Matsuoka) evolved from lower-tiered monster hunter to a full-fledged hero demonstrated the power of a person’s heart, all the while adding a little humor here and there thanks to Hestia’s (Inori Minase) lovey-dovey mannerisms. With J.C.Staff bringing back the series this summer for a full-fledged second season, a little reminder of why this series is loved by anime fans across the globe was perhaps called for.

Said reminder has arrived with the full-length feature film Is It Wrong to Try to Pick Up Girls in a Dungeon?: Arrow of the Orion, a new adventure penned by original light novel author Fujino Ōmori. Seemingly taking place in-between Seasons 1 & 2, the film has Bell, Hestia, Lilly (Maaya Uchida), and Welf (Yoshimasa Hosoya) embarking on a special quest made by Hermes (Sōma Saitō) and the newly arrived goddess Artemis (Maaya Sakamoto). Winning a “contest” for an all-expenses paid trip winds up being an excuse for Artemis to find her Orion, which — as one can guess — is Bell. However, as they journey towards the goal of defeating monsters outside of the usual dungeon, Artemis slowly shows sides that makes Hestia question her well-being. 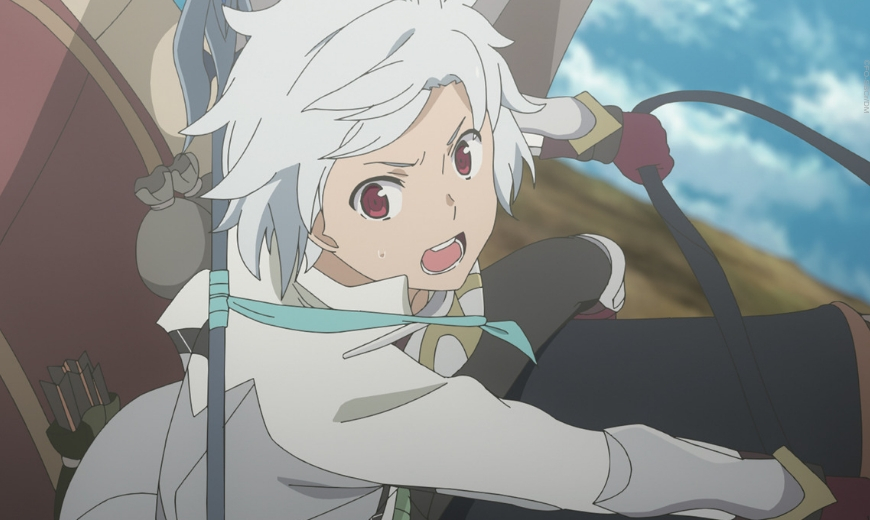 Arrow of the Orion feels very much aligned with the DanMachi lore, thanks in part to Ōmari’s involvement. Never does it feel like it’s just a one-off stand-alone story like most anime original films tend to be; rather, it feels like it expands the series’ universe in a bold and refreshing way. Yes, it has its trademark humor and can-do attitude well presented for fans to enjoy, but it adds something that the original series seemed to lack: tragedy. Like it or not, this is a more mature take on what occurs across these lands, and it makes not only Bell a more respectable protagonist, but also one that constantly conflicts with his life mantras.

In a way, the film adds a lot of growth to these characters that we’ve come to love. Rarely does it step back to wink at its audience or elbow their side in a way that says, “See what we did there?” Instead, there’s a bigger focus on having Bell becoming a better person and hero, all the while pushing the mentality that the victories of heroes in fairytales never reflects what happens in the real world. Sacrifices must be made for the sake of the greater good, and Bell & the Hestia Familia learn this in perhaps the hardest of ways. 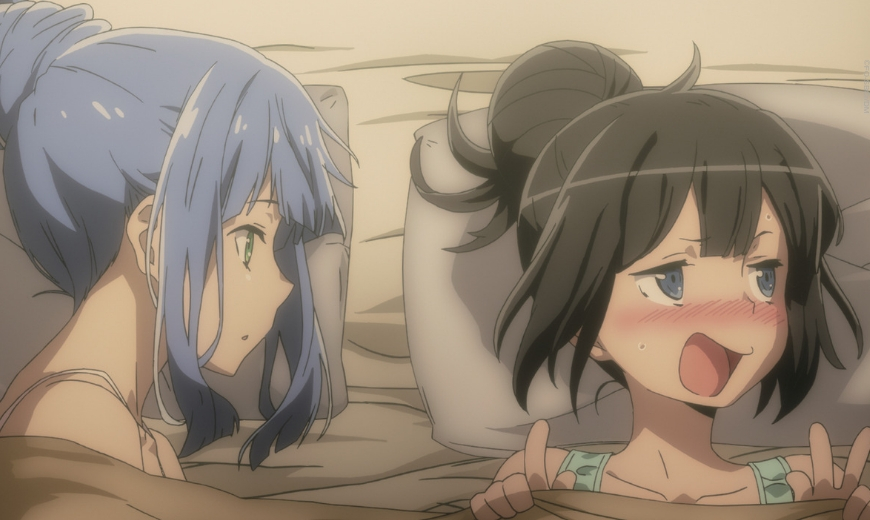 Of course, it wouldn’t be DanMachi without some good humor thrown to balance out the more action-y elements. The bantering between Hestia and whomever stands between her & Bell is always pretty funny to watch unfold, though her big rival Aiz Wallenstein (Saori Ōnishi) takes a back seat for this film for the most part. Hermes plotting to peek at the bathing beauties blows up in a wonderful way, with him being constantly tied to a tree late at night a nice visual gag towards his perverted means. Even the girl talk moment between Hestia and Artemis is done with a fine blend of humor and sweetness, easily showcasing why the blue-ribboned goddess is beloved by the fanbase.

Despite some of its stronger elements, there are some moments that tend to drag the story down a bit. While I appreciate some of the back story aspects of Artemis and the like, it sometimes dilutes some of the more exciting elements that viewers were treated with moments below. Perhaps it was an issue with putting a lot of exposition into an 80-minute film, but nevertheless its means of presentation isn’t exactly up to par with the rest of the movie. And while this series has always been about Bell & Hestia, it’s a shame that Aiz, Finn, Tiona & Tione, and the rest of the Loki Familia aren’t used as much, despite the many strengths they’ve showcased both in the main series and their Sword Oratoria spinoff.

Is It Wrong to Try to Pick Up Girls in a Dungeon?: Arrow of the Orion crafts a fun and fulfilling adventure for the Hestia Familia, one that serves as a fine reminder of why this series is beloved so much. Although we’ll have to see if elements of this film are implemented into the upcoming second season, it still gives its characters a chance to evolve into better people and heroes by journey’s end. With its trademark humor and action in tow — along with a slice of tragedy — Arrow of the Orion fits strongly into the DanMachi storyline in ways that will satisfy fans and newcomers alike.