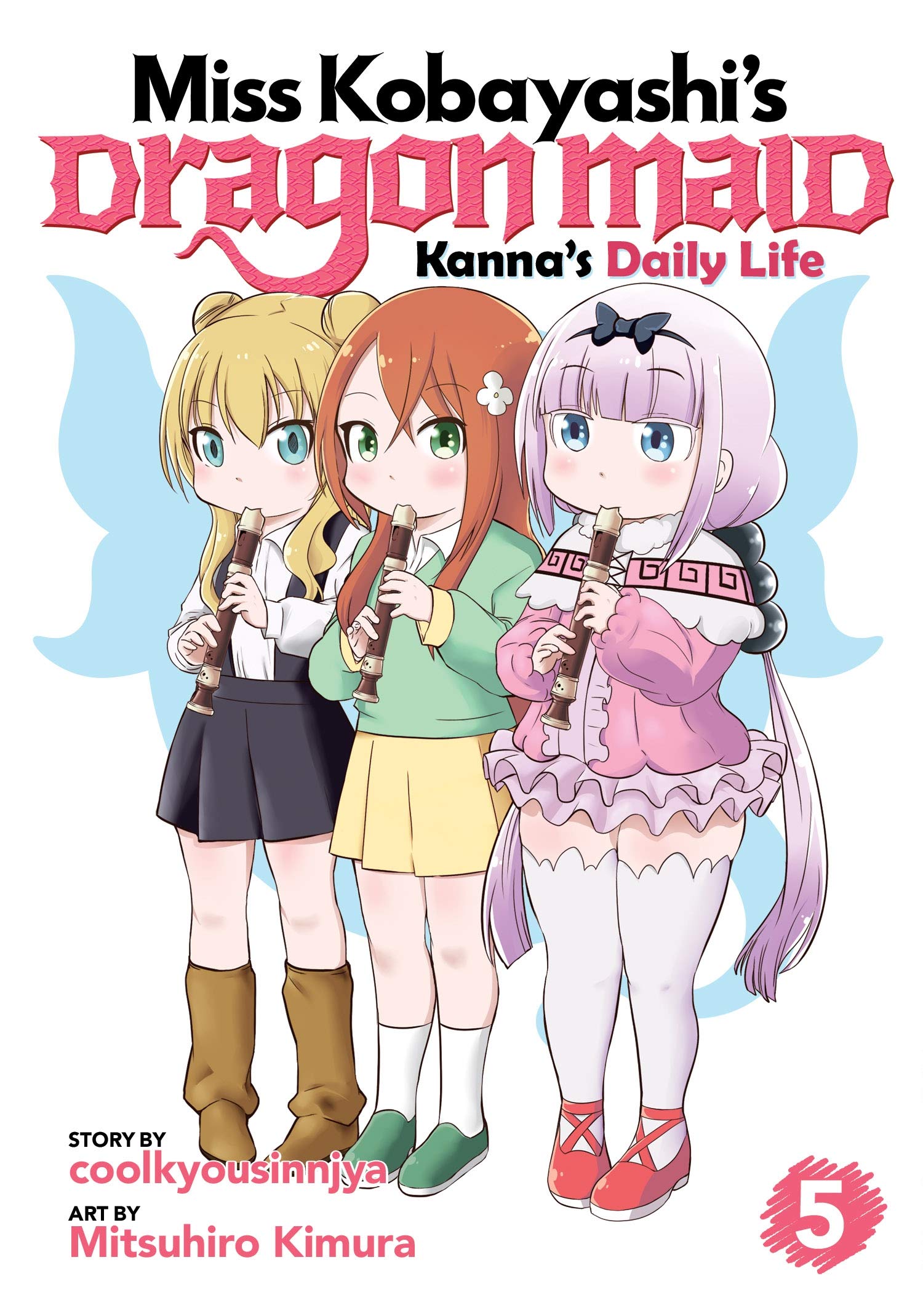 Where the main Miss Kobayashi’s Dragon Maid series focuses on the dynamic between the titular character & Tohru, Kanna’s Daily Life instead focuses on the sweetness and adorability that the smol dragon Kanna gives delivers throughout. For the most part, it results in many cute stories that are both funny & entertaining. However, with its fifth volume, it appears that even the cutest dragon in the world may find herself tripping with its plot.

While the stories still focused primarily on Kanna & Saikawa, a new face in the form of American girl Chloe enters their realm. Being the jealous type, Saikawa sees Chloe as a threat to her beloved Lolita-dressing friend. As the friendships grow, so does the trust, resulting in new bonds and friends making new memories together. The question remains though on whether or not Chloe can keep Kanna’s dragon side secret from even her closest friend.

First introduced in Volume Seven of the main Dragon Maid manga, Chloe adds a bit of a foreign perspective to the spin-off’s surroundings. While one can argue that the dragons are foreigners themselves, the American eyes that Chloe give off are very reminiscent of any outsider looking into an unseen world. In a way, it works on a hearty level, as it shows how much Kanna cares about her friends. Unfortunately, it doesn’t quite deliver on the manga’s trademark humor.

As Kanna’s Daily Life has also done a good job with evolving Saikawa as a character, this volume is seen as a step back towards her progress. Her jealously towards others has been toned down greatly throughout this run, so watching her do a complete 180 on Chloe was rather disappointing. It makes her likability somewhat diluted, to the point where I’m sure many readers would wonder why Kanna would be friends with her in the first place. (Granted, her attitude does go back down towards the end, as evident by the final Valentine’s Day chapter.)

Outside of the main story, there’s still some very funny everyday occurrences that Kanna faces throughout. Playing nurse with a sick Saikawa demonstrates her strong heart, only for her to get jealous at other students for being unable to fall ill in return. A search for a new kotatsu results in some cutesy laziness, although it’s not as stellar as when they won the first one in the original series. The big highlight of this collection has Kanna and Saikawa visiting Tohru at the maid cafe she works, resulting in the Dragon Maid going a little too dark with the “magic spell” she casts on their food.

Kanna’s Daily Life still manages to deliver the warm feels, but the amount of intelligence Volume Five showcases isn’t as strong as the previous ones. Nevertheless, it’s still nice seeing Mitsuhiro Kimura crafting side-stories that feel worthy enough to be a part of coolkyousinnjya’s universe. Here’s hoping that the balance between smart and cute writing gets back on par with what readers are used to, as this volume somewhat stumbles with its execution.