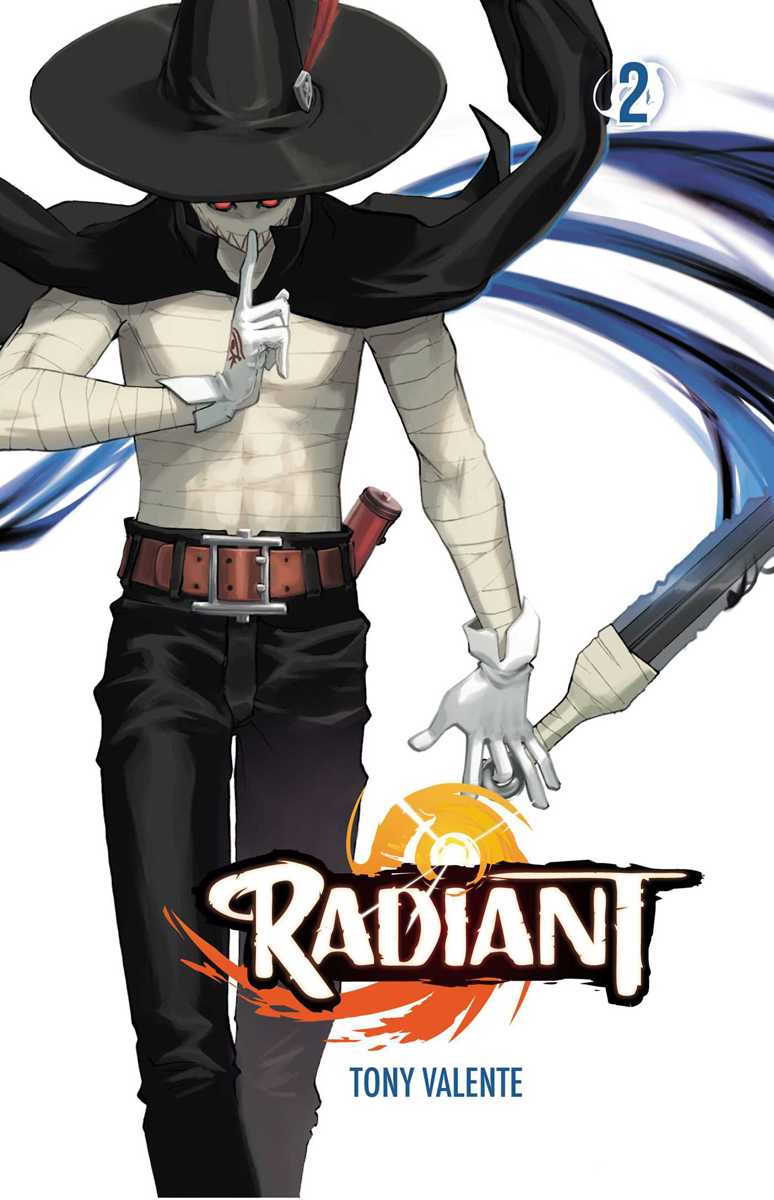 Tony Valente's RADIANT started off on a solid note with its world-building and wonderful characters via its first volume. A blend of Wakfu, Fairy Tail, and The Seven Deadly Sins, the French-born comic creator successfully made a series that's worthy of being placed with the works of Japan's finest manga authors. While the second volume does continue onward with this trend, it's not without its fair share of flaws.

After training with Yaga, Seth realizes that he has issues manipulating Fantasia. The wizard-to-be then decides to hunt for more Nemeses in Rumble Town, with Mélie and the reluctant Doc tagging along. However, when the Inquisition arrives, Seth finds himself dealing with two kinds of monsters: the Nemeses and ignorant racist town leaders. That's where another seemingly threatening individual peers his mummified head, one that seems to know something about Seth's past.

First the good news: the latest volume of RADIANT is just as entertaining as the previous one. The camaraderie that has been built between Seth, Doc, and Mélie, brings together a strong essence of friendship and nobility. It also helps that they can run through one punchline after another for the sake of being funny. What's more, readers can sense each teammate's power becoming stronger thanks to the help they often receive from one another (well, Seth and Mélie, at least.)

Then there is the stronger aspect of how those infected by the Nemeses are treated by the public. Not only does it present this issue in a fantastical way, but it also lumps in some legit real-world problems into the mix. Reading how Konrad of Marbourg views foreigners of Rumble Town does scream parallels to a certain bleach-skinned world leader, especially when he says that they're the source of all the town's problems. How he treats Seth and those who are different from him is actually painted scarily, to the point where I'm sure many a reader would start yelling at their book for his ass-backwards thinking. Valente has a knack for creating a good, hate-worthy villain, and he succeeds in having Konrad be one hell of a scum bag.

However, this volume of RADIANT suffers from having just too much dialogue in various scenes. I can't help but feel like some of the talking, especially when it comes to Doc's explanations, runs way too long. In fact, there are areas of the story where the conversations were distracting me from its art style, to the point where I felt like I was being forced to read something for a credited college course instead of a fun manga series. (I've rarely related to Saitama from One-Punch Man, but this volume made me wish I could tell Doc to keep his information down to a hundred words at max.)

Action-wise, it's the fight against the plethora of rat-like Nemeses that stands out as the volume's best. The nimble action of the monsters as Seth and Mélie attempt to knock them out is wonderfully captured with high details and explosive fanciness. How the two and Doc react to seeing all the unconscious Nemeses they gathered also boosts a strong dose of silly reactions, especially when a certain toilet-papered wizard appears out of the blue to put a halt to their celebration. And while we only get a minor glimpse of the true mastermind behind the Nemeses invasion in Rumble Town, the fights that break out in the last few pages are setting themselves up for one massive throw down!

The second volume of RADIANT may suffer from having a bit too much exposition, but it's when it's making as big a scene as possible where it shines the most. With a good humorous spirit and some muscular magic in tow, Valente's mystical world delivers a fine dose of popcorn-worthy entertainment. With that being said, I'm hoping the next volume tones the dialogue down just a tad bit, as I felt like I read a novel's worth of chatter in such a small amount of time.