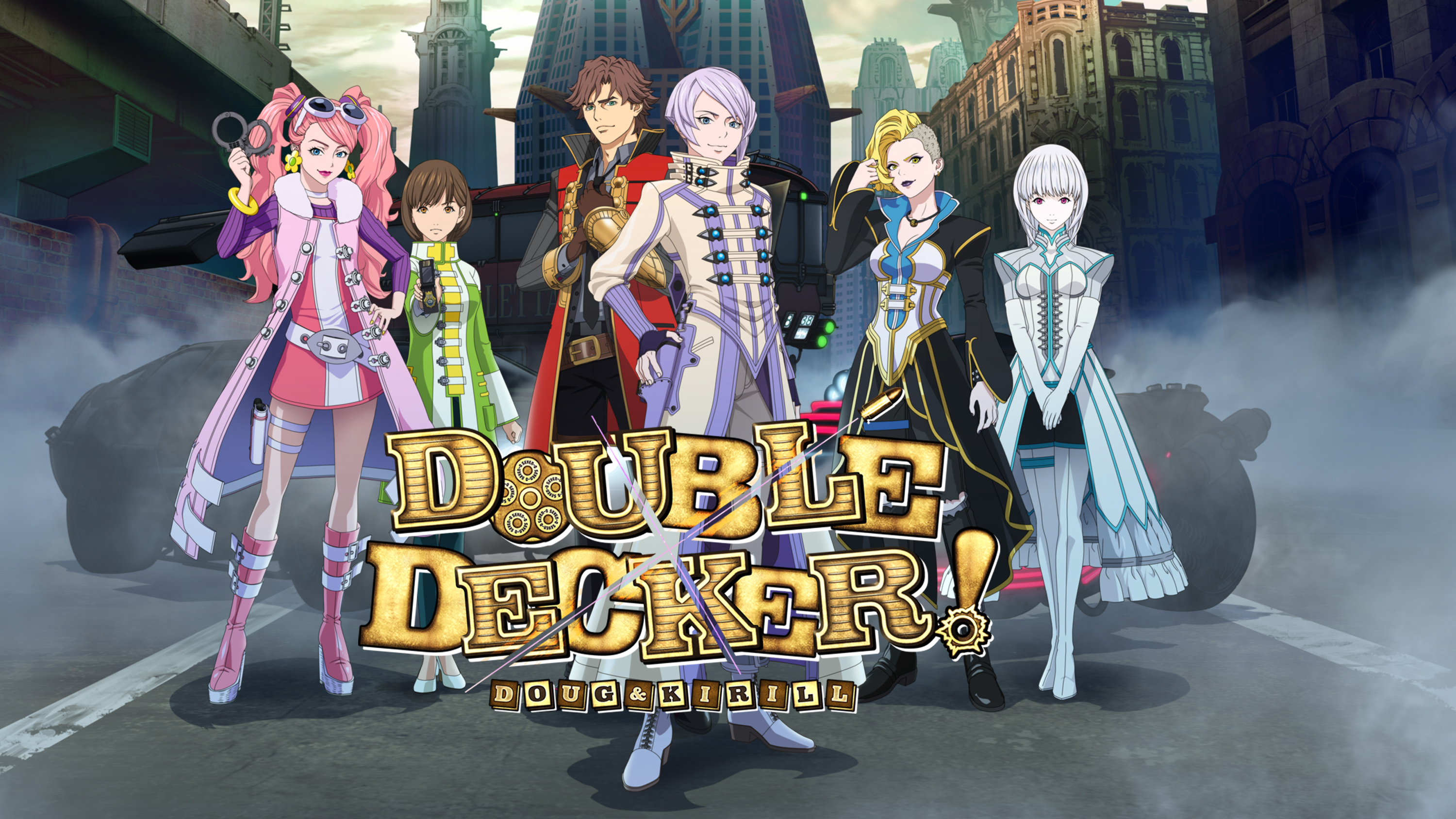 There's nothing more satisfying and fun to watch than buddy cop entertainment. Whether it's in dramas like Dragnet or NYPD Blue, comedies such as Rush Hour or Hot Fuzz, or a mixture of both in Lethal Weapon and The Guard, there's a dynamic between two officers of the law that you don't find in other forms of media. Although anime has dabbled with buddy cop series such as City Hunter and Mad Bull 34, none of them have gone the deeper Shane Black-like route that Hollywood likes to present for its popcorn-chowing audience. That is, until Double Decker! Doug & Kirill came around this autumn with explosive style!

Reuniting the staff of Tiger & Bunny, Double Decker! Doug & Kirill takes place in Lisvaletta, a city of high crime and good-natured citizens. A highly toxic drug known as Anthem has found its way into the hands of many a villain, with the police force creating a special criminal investigation unit solely to tackle this problem: Seven-O. This team is split into pairs, with two cops sharing each task to take on the bad guys and keep Anthem off the street. This particular anime places most of its focus on one pair: the veteran Doug Billingham (Satoshi Mikami) and the rookie Kirill Vrubel (Kōhei Amasaki). 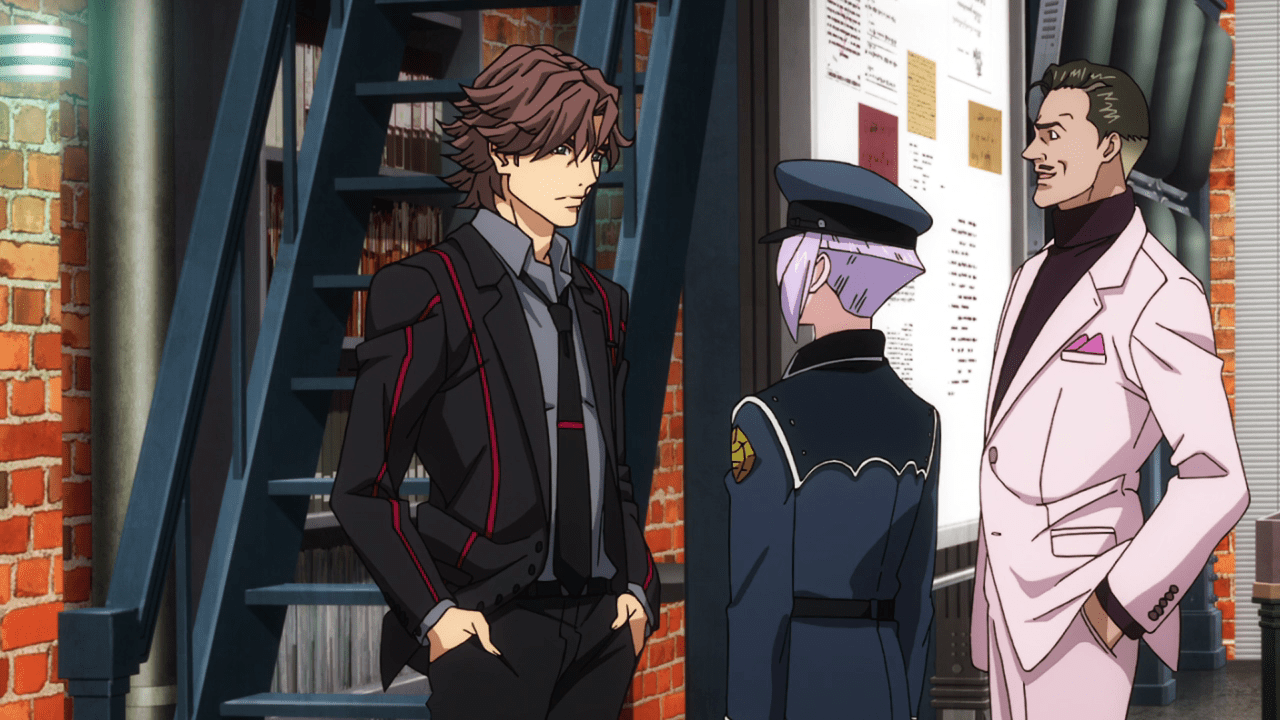 Together, Doug and Kirill seek out as many clues as they can to put an end to the Anthem outbreak. Fortunately, the duo has a fine crew of cops backing them in Seven-O, from the vulgar Deana del Rio (Saori Hayami) and the android Yuri Fujishiro (Atsumi Tanezaki) to tech expert Apple Bieber (Takuma Nagatsuka) and head honcho Travis Murphy (Rikiya Koyama). Of course, no buddy cop scenario isn't without its fair share of quirks, as each member has a level of intelligence and stupidity that correlate well with whomever is being paired together. This naturally leads to many moments of misunderstanding, goofy retorts, and silly screw-ups that deliver high levels of fun mixed with its high-powered action.

There is a lot more occurring behind the scenes of Double Decker! Doug & Kirill, but saying more would spoil the surprises that it has in its wings. Whether it's a new discovery leading towards the true mastermind behind Anthem or a new piece of knowledge behind a member of Seven-O, this anime keeps adding many layers to its world with both surprising ease and a decent amount of intelligence. The real fun of the show lies within the banter between everyone in the crime unit, with poor Kirill being a victim of one too many gags and turns that keep Doug and the rest snickering behind his back. Its narrator (Yōji Ueda) never misses a beat when calling out someone's douchebaggery, with the voice sometimes getting into the mischief himself just because he wants to. 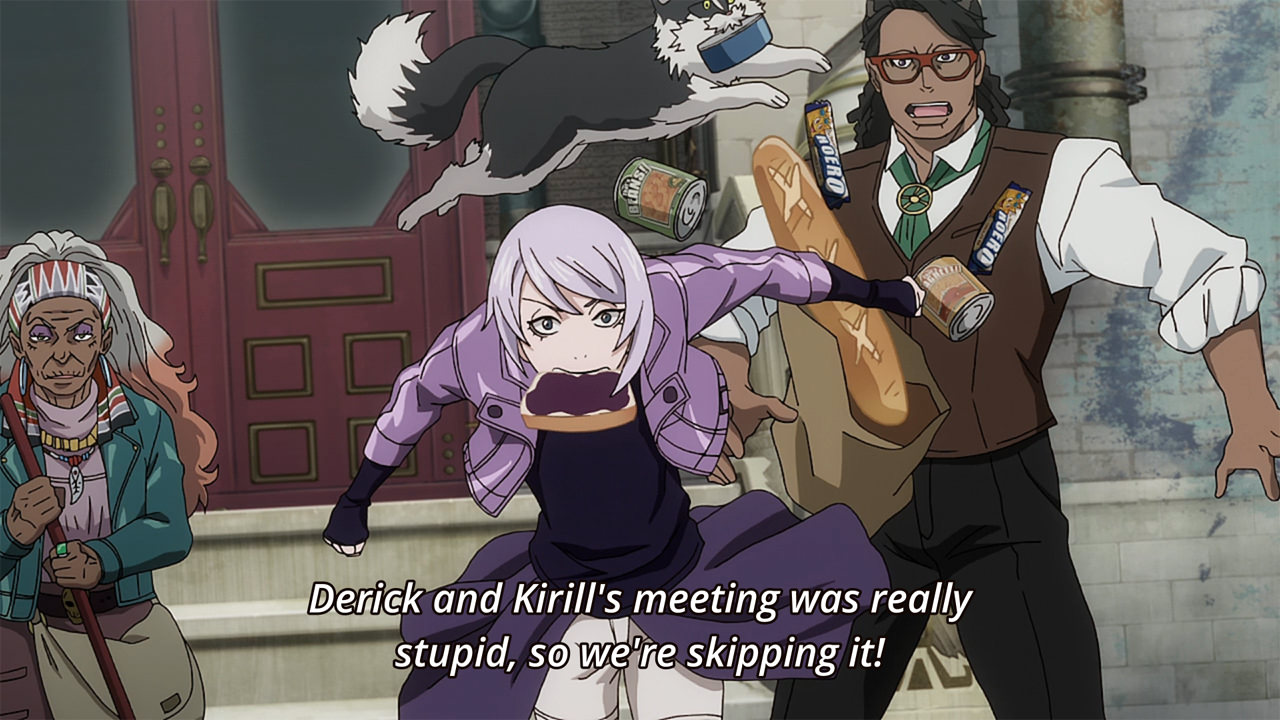 Why Double Decker! Doug & Kirill works is because of how it treats its audience. For the most part, we're always in on the joke that's about to happen, with the real punchline being how these characters react to the situations on hand. Despite a few points later in the series that keep us in the dark, its means of revealing these twists comes with a devilish grin and a wag of the finger, as if telling us "You didn't think it'd go down like this, right?" with a comforting level. This anime just wants to have boatloads of fun, and it succeeds not just from a comedic standpoint, but also an action-y one.

When the time comes for Seven-O to dive into action, the adrenaline that pumps through its veins is near steroid-inducing. Be it just a gaggle of crooks or an ultimate mob boss, no expense is too bombastic to show off how these cops solve & fight crime. At times, there are nods to various superhero comics and famous last stands, with the series cleverly winking at its audience when the time comes for the final blow to be delivered. Sometimes it's to show how badass everyone is, and other times it's for a laugh; in the end, it leaves a permanent smirk on one's face soon after watching it. 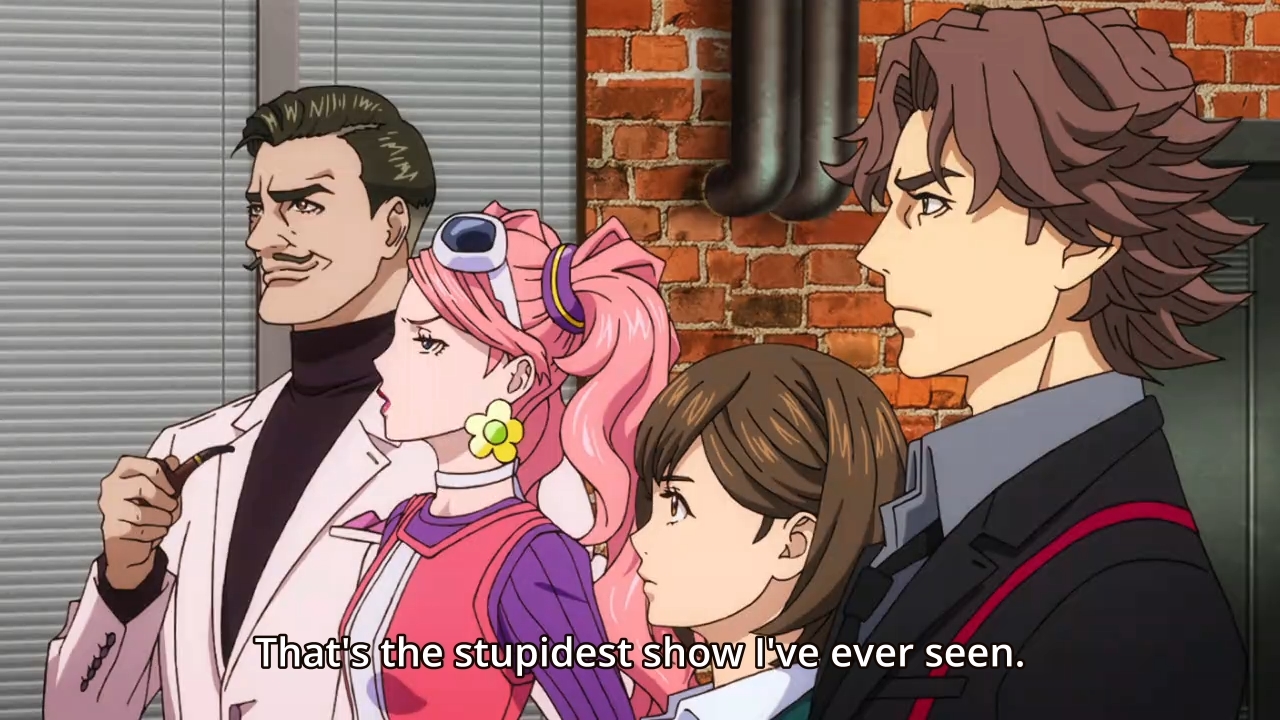 Sunrise goes above and beyond with its animation, even more so than what they accomplished in Tiger & Bunny. The cityscape of Lisvaletta brims with life every moment it's on display, even going so far as to throw in some cool speedy effects during transitions like many iconic cop shows have done in the past. Of course, it's the action where Double Decker! Doug & Kirill shows its meat & veggies, with hand-to-hand combat and gun play being as slick as a top-tiered pimp with an army of gals looking to hustle. Even though there are some noticeable errors here and there when the action switches from hand-drawn to CGI, it never feels too out of place when it makes these transitions.

A good buddy cop show needs good chemistry between its cast, and the pairing of Mikami & Amasaki as the titular characters are pitch-perfect. Mikami often is the straight cool guy as Doug, with Amasaki being the bouncy punchline at the precise moment as Kirill. Hayami goes a full 180 on her usual sweeter demeanor as Deana del Rio, with her sounding nasty and vulgarly hilarious every time she opens her mouth. Koyama's Travis takes a heavy cue from Stephen Colbert's performance as Phil Ken Sebban in Harvey Birdman, being as suave as he is a pure idiot. Perhaps the most underrated role in this series is that of Yō Taichi's Maxine Silverstone, who's hard exterior hides a soft and heart-warming interior that's on full display during an episode involving a high school prom. 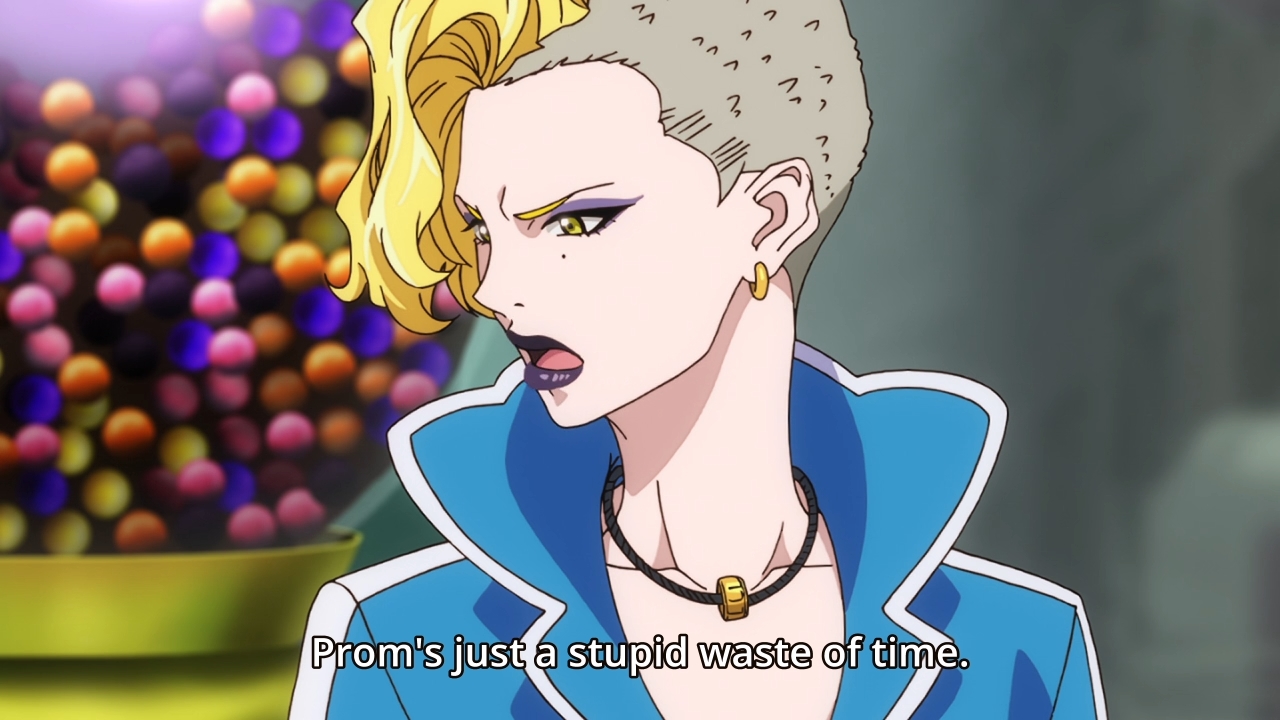 Yuki Hayashi (Death Parade, Haikyū!!) goes all in for a soundtrack that calls back to the likes of Brooklyn 99 and Beverly Hills Cop. Its melodies often match the badassery that's occurring onscreen, showcasing cool and punching beats that add to the anime's flair. Opening theme "Stereo to Monologue" by KiRiSaMe Undertaker is a fast-paced rock track that brings forth the level of speed occurring in the show's many action-heavy scenes. VickeBlanca's "Buntline Special" is a rip-roariously funny track with drunken broken English, with its only crime being that it takes one too many cues from a certain iconic Beastie Boys track.

Double Decker! Doug & Kirill is all about fun and excitement, with a little social commentary sprinkled in for the sake of common sense knowledge. It never shies away from going to the extreme, nor does it want to give its viewers a bad time. Instead, Double Decker! acts as an escape from shows that are often too smart for their own good. Lighting a mighty anthem and delivering smiles along the way, Doug & Kirill is a buddy cop series that should be on everybody's radar. Don't think, feel so good!