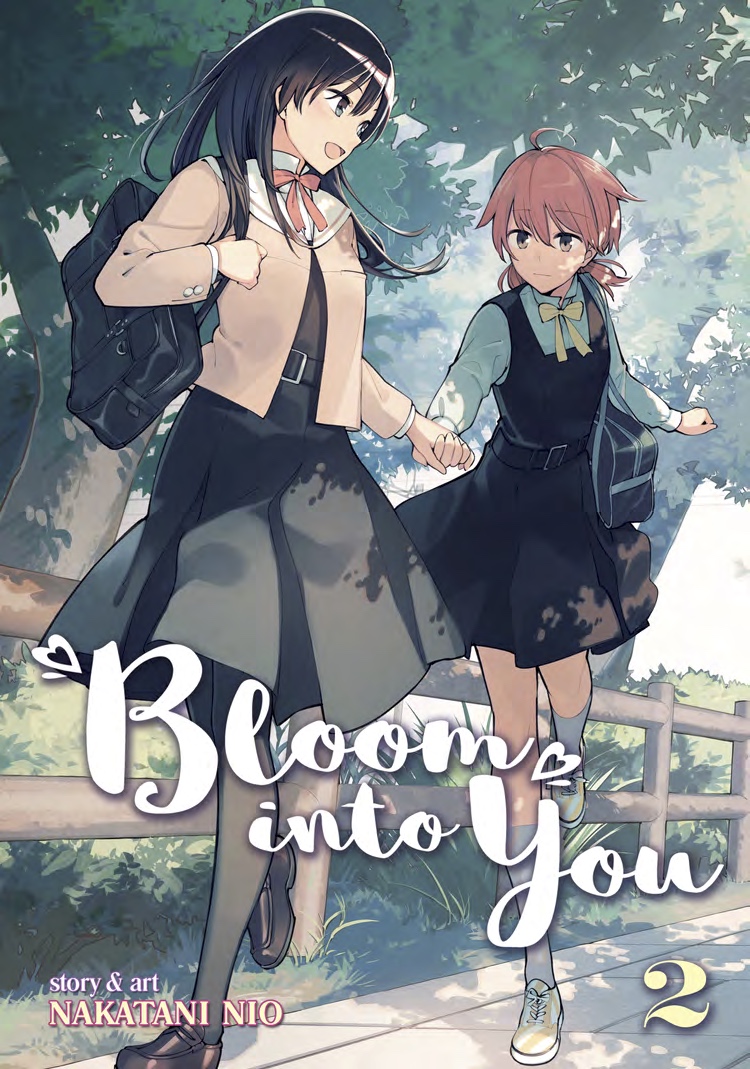 One could guess where Nakatani Nio wants to go with their yuri series Bloom Into You, even if it takes its subject matter more serious than others do. Its first volume built up a world and friendship between first-year Yuu and now-student council president Touko, as well as showcased the inner & outer feelings they have for one another. Its second volume continues onward with its will they/won't they mantra, but gives off a lot more character depth than we were to expect from it.

With the election come to pass, the student council decides they would like to put on a play during the annual school festival. A mystery lingers as Yuu tries to figure out why the student council hasn't put on a play in years, with Touko pushing herself towards succeeding on the stage and in the classroom. However, upon further digging, Yuu discovers the real reason behind Touko's insistence to stage a show, and it has something to do with her family's past. It's when she confronts the student council president about it when their friendship (and possible romance) is put to the test. 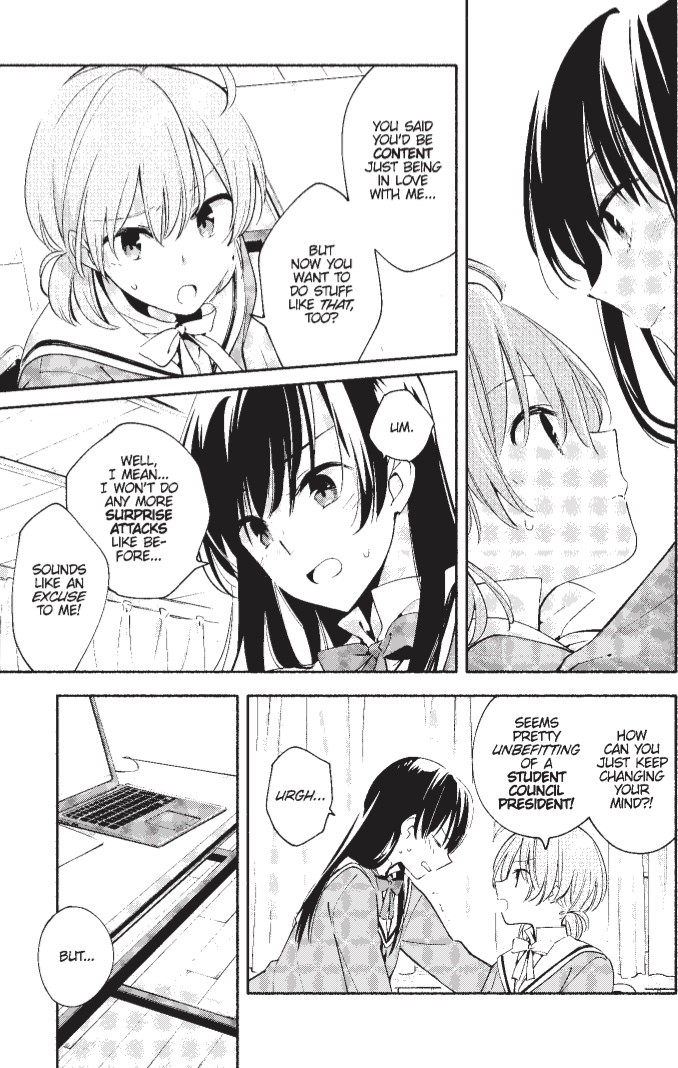 This particular volume of Bloom Into You starts off somewhat slow, as it gives its readers time to catch up with all the new faces and tasks that have been thrown at the student council. However, things kind of heat up when student council member Maki catches Yuu & Touko kissing, leading to him promising Yuu that he won't tell a soul and -- unbeknownst to her -- root the two on from the sidelines. A visit to Yuu's home for a study session also ups the feelings aspect between the two, as they both dive into the odds and ends of how their friendship could be evolving into something more meaningful. And then there's the revelation behind why the student council hasn't put on a play in seven years.

Without spoiling anything, I will say that such a storyline showcased in this particular volume has been done before in many, many other manga and comics. With that being said, I appreciate the fact that they handle it in such a manner that comes off as both mature and heartfelt. Touko feels a lot of pressure for having to shoulder a task like this in the shadow of someone else, worrying that she'll have to face it all alone. It's why I liked how Yuu responded to her stubbornness, giving way to a new amount of strength placed in both friends' hearts. Though we don't see the full-on conclusion to this predicament in this volume, my hope is that it leads towards a better understanding of where Touko is coming from and how Yuu will be her rock in some fashion through all of this. 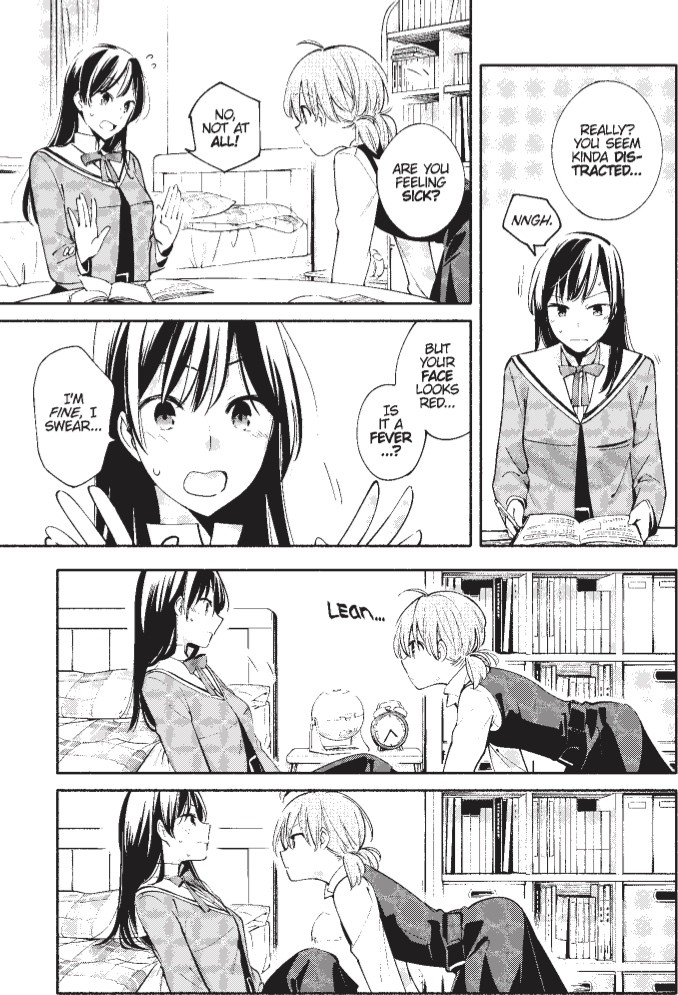 It's also nice to see a little bit of humor thrown into the story. The chapter where Touko is in Yuu's room waiting to start studying reveals a much cuter side to the student council president. She reacts in the same fashion to her surroundings as a lovesick boy in a girl's room for the first time, giving way to some humorous bantering between the two friends. Even with just a mere touch of her wrist, Yuu somehow turns Touko into Silly Putty as her desire for love burns up. While it can be goofy at times, how Touko reacts to being handled by the girl she loves is surprisingly relatable to anyone who's had just the slightest of touches placed on them by the person they adore.

The second volume of Bloom Into You does a stellar job with evolving its characters, giving way to conflicted feelings and a realistic means of sorting out one's emotions. As the pair of Yuu & Touko continue to see their friendship blossom, the feelings they have for one another seemingly start to increase gradually towards an honest realization. Though where it cuts off may have readers guessing where Touko will go next with her staunch mission, at the very least she knows that she'll have Yuu by her side for the thick & thin of it. For Bloom Into You to get high school romance and the feelings it creates is not just great for its LGBT readers, but also for anyone looking to pick up a solid romance manga with a lot of heart and soul in every page.