When you think Doga Koba, images of fluffy characters and a solid dose of comedic flair will always come to mind. From its take on a lazy girl in Himouto! Umaru-chan and a humorous look into the gaming industry with New Game!, the anime studio manages to always bring forth a memorable viewing experience for all. However, it's their 2014 anime comedy Monthly Girls' Nozaki-kun that stands as their absolute best, thanks in part to it poking fun of every rom-com trope ever concocted. While most of us are still waiting for the return of Nozaki & Chiyo, their staff have all reunited on an original anime project that brings two continents together via the bonding of the hearts: Tada Never Falls in Love.

The story places its focus on camera club member Mitsuyoshi Tada (Yūichi Nakamura), who runs into a foreign girl while taking pictures of cherry blossoms. Named Teresa Wagner (Manaka Iwami), the young lady winds up being a transfer student from the country of Larsenburg. (It's a fake country, so don't be an idiot like me by Googling it!) She and her traveling companion Alec (Shino Shimoji) wind up joining the school camera club, with its idol-loving president Hajime (Yūichirō Umehara) and fellow members Kaoru (Mamoru Miyano) and Hinako (Shizuka Ishigami) welcoming them with open arms. 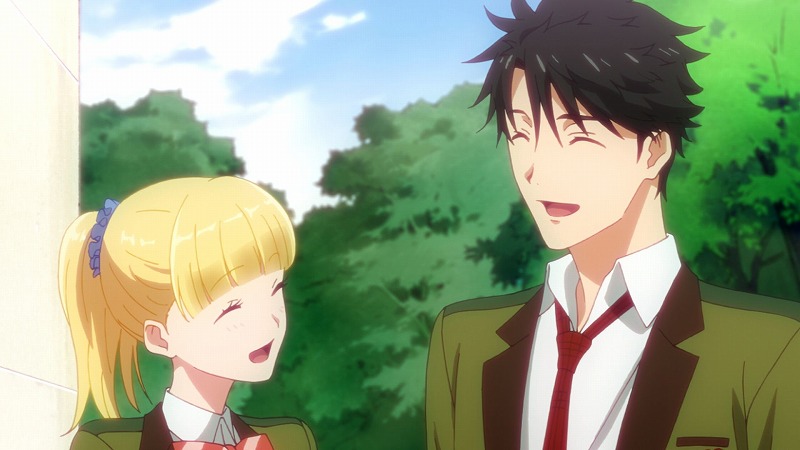 As the camera club progresses through its activites, Tada and Teresa wind up becoming close friends, with possibly bigger feelings to follow. However, Teresa is hiding a major secret from Tada: she's actually the Princess of Larsenberg, and is bethrothed to marry the French nobleman Charles de Loire (Takahiro Sakurai). While the good times are being had, this hidden fact keeps Teresa from truly expressing her inner feelings; and as the story progresses, these feelings slowly bleed into Tada's own mentality. The question remains on what triumphs in the end: the duties of nobility or the true desires of the heart.

What Tada Never Falls in Love does best is showcase the realism in both Tada and Teresa's relationship. Although it tends to follow the usual romantic comedy routes, there's a bold focus on their mentalities and attitudes throughout the anime. One of the key reasons for it is its treatment of these two's back stories, with Tada's treading some tragic grounds involving his parents' deaths that are some of this season's most emotionally charged moments. It's this aspect that keeps this series grounded from going too off the rails, something that Doga Kobo usually knows how to master in their shows. 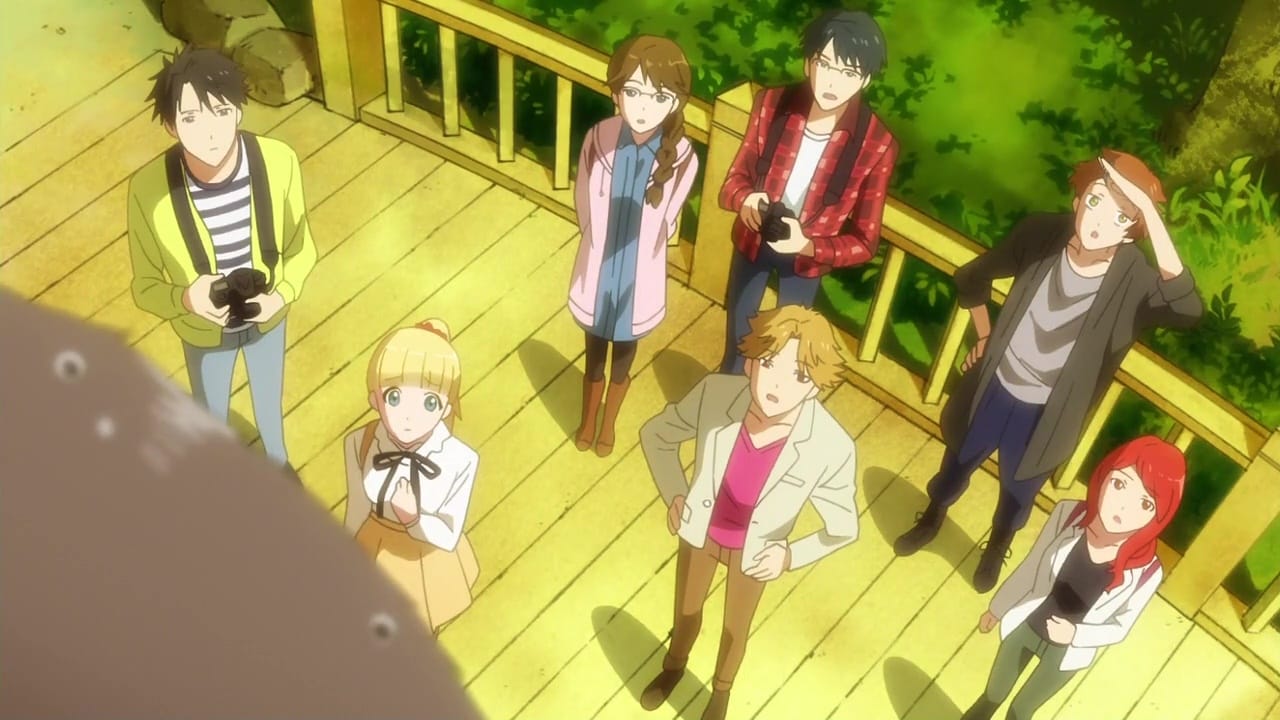 It also helps that the two main characters are surrounded by some lively friends. Kaoru's usage as the series's main comedic fodder never goes to waste, especially when he jokingly hits on Alec or demonstrates some hilariously narcisstic traits with the way he photographs himself. The duo of Hinako and Hajime are quite entertaining, especially when it's revealed that Hinako is secretly the model that Hajime constantly fawns over. Of course, taking the role of the cute animal character, the massive feline Nyanko Big (whose heart voice is hilariously provided by veteran Japanese actor Akio Ōtuska) often tries to attack Kaoru and even has his own unrequited love to deal with.

However, a big problem arises in the anime's narrative, which takes far too long with progressing the overall story. Although there are fun moments with Kaoru meeting his favorite gravue idol or the romantic conquests of Nyanko Big, little or nothing is done that helps push along the tale of Tada and Teresa. Often, side stories flush out the main characters to make them more relatable, but these tales almost make them seem more like background characters than the main focus that they're supposed to be. Because of this, it feels like Tada Never Falls in Love could've cut out these unnecessary moments, and instead craft a better-paced 2 ½-hour film. 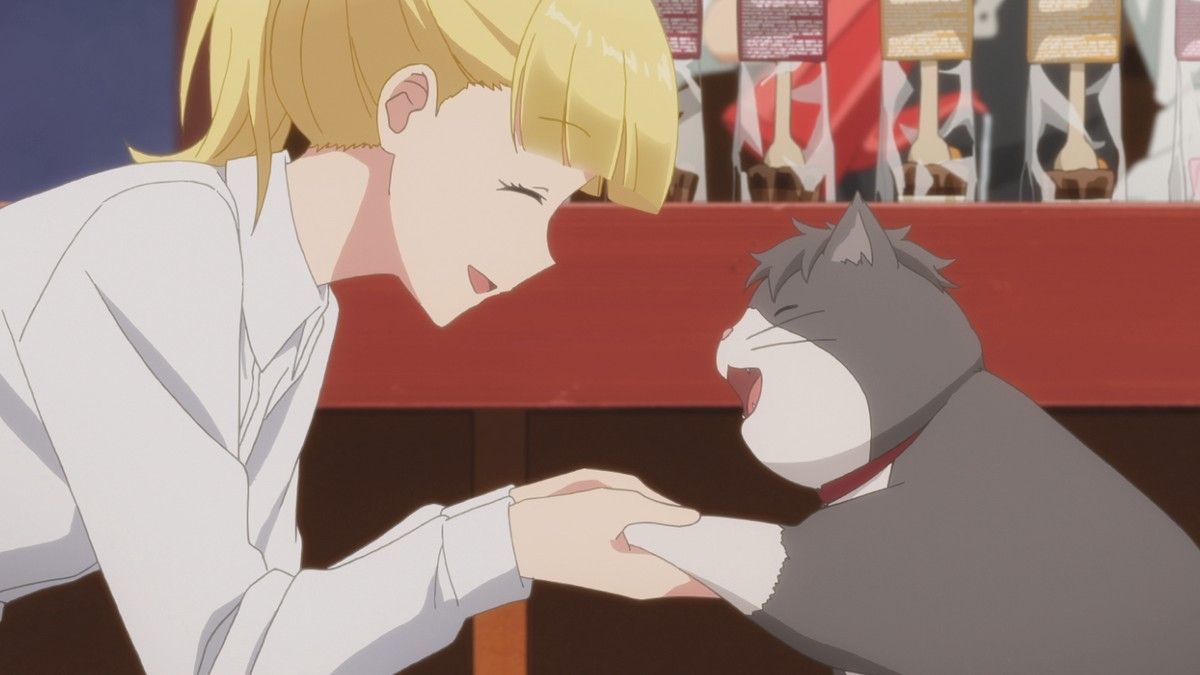 Thankfully, the climax of the story is a wonderful payoff. Without spoiling the fun, the true paths of both Tada and Teresa are revealed for one another. The way it does that is via some well-grounded emotional depth and some solid storytelling that doesn't feel as stale as most of these love-based comedies usually go. Even if it may take a cue from a Hugh Grant flick from time-to-time, it surprisingly does so in a way that leaves you guessing what will happen up until the literal final moment of its last episode. Because of this, it makes up  for some of the slower aspects this series treaded through to get to the satisfying material.

Naturally, Doga Koba crafts the world of Tada Never Falls in Love with bright vivid colors and multiple levels of personality. Whether it's the café or a school club meeting room, the attention to detail is mesmerizing to say the least. It's when you see the country of Larsenburg towards the end when you realize how incredibly talented these animators are, as they capture a gothic European-styled nation with a huge amount of realism. In the foreground, the characters are brimming with much cutesy emotion, with their overall looks and designs fitting well with the tone of the series. 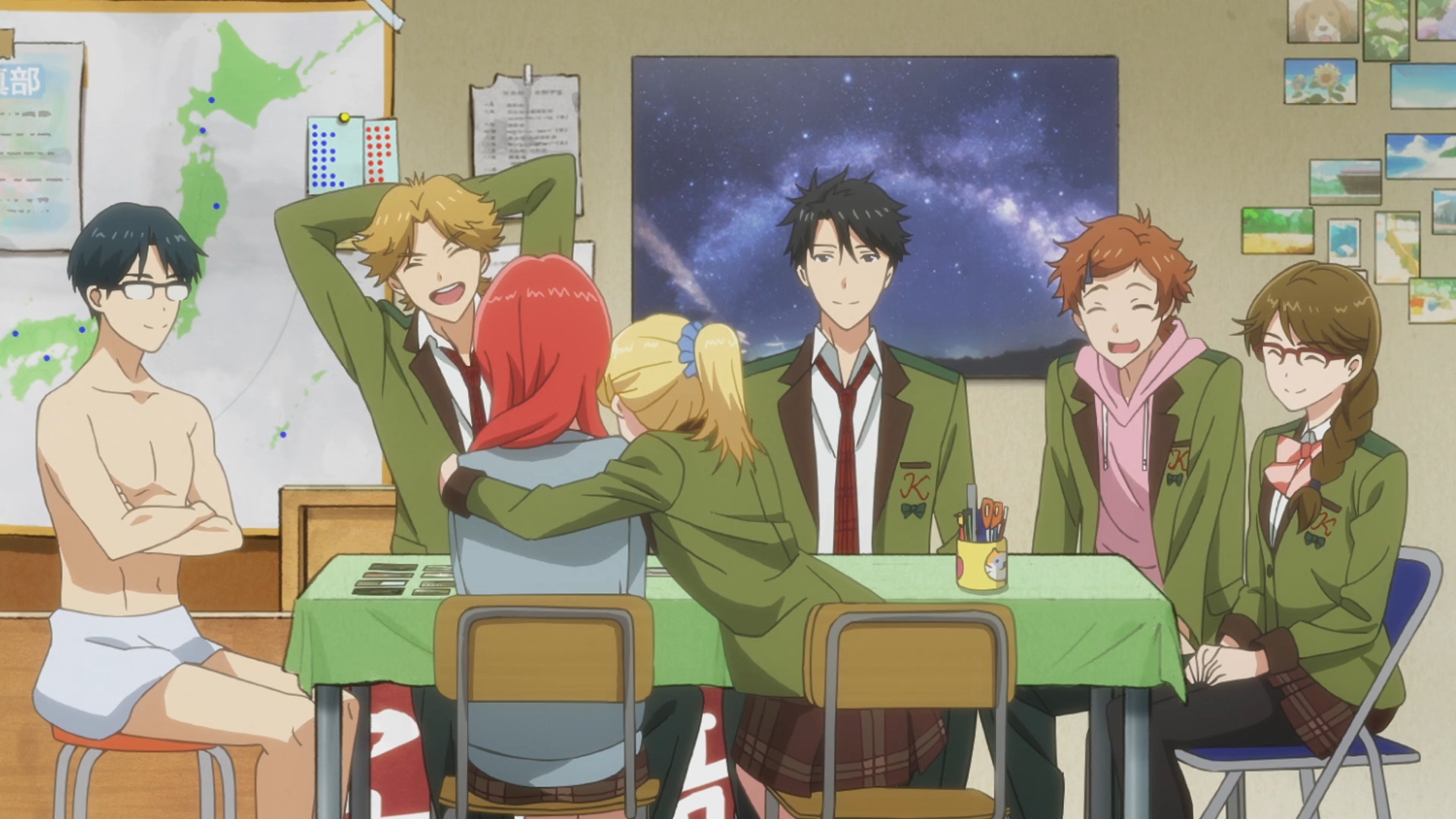 When it comes to the casting, the voice actors & actresses chosen magically fit their parts quite well. Nakamura's Tada is wonderfully down-to-earth, capturing a level-headed attitude with an emotionally captivating personality that grows more open as the series progresses. Iwami's Teresa delivers quite the can-do attitude in her performance, often reminding me of Audrey Hepburn's Roman Holiday character Princess Ann (which the series' opening animation cleverly references). As her friend Alec, Shimoji brings a stoic vibe that blossoms into a character that almost steals the show in ever scene there is. That is, if it wasn't for Miyano's performance as Kaoru, who takes the protagonist's best friend stereotype to new and hilarious levels.

Composer Yukari Hashimoto (Yurikuma Arashi, March Comes in Like a Lion) showcases a soundtrack that is both beautiful in the more romantic scenes and downright silly at the show's most comedic. Opening theme "Otomodachi Film" by Masayoshi Ōishi is one of this year's most catchiest and peppiest theme songs, becoming an ear worm that will forever reside in the brain of whomever hears it. Meanwhile, Iwama stays in character as Teresa when performing a strong rendition of Sambomaster's "Love Song" for the end theme, one that surprisingly sits on equal ground with the original version.

Despite some of its narrative flaws, Tada Never Falls in Love succeeds at being a rom-com that'd make any viewer smile. With its lovable characters and some laugh-out-loud moments, Doga Kobo's original series has enough greatness that makes it a worthy watch. It may not always make your heart vibe like a rainbow, but Tada Never Falls in Love will easily keep your feelings warm and fuzzy throughout its lovey-dovey tale.

Now with that all being said and done, can we finally get that second season of Monthly Girls' Nozaki-kun that the anime fandom's been clamoring for?!

Tada Never Falls in Love can be viewed on HIDIVE, and has been licensed by Sentai Filmworks. Episodes 1-13 were observed for this review. Promotional consideration provided by HIDIVE.