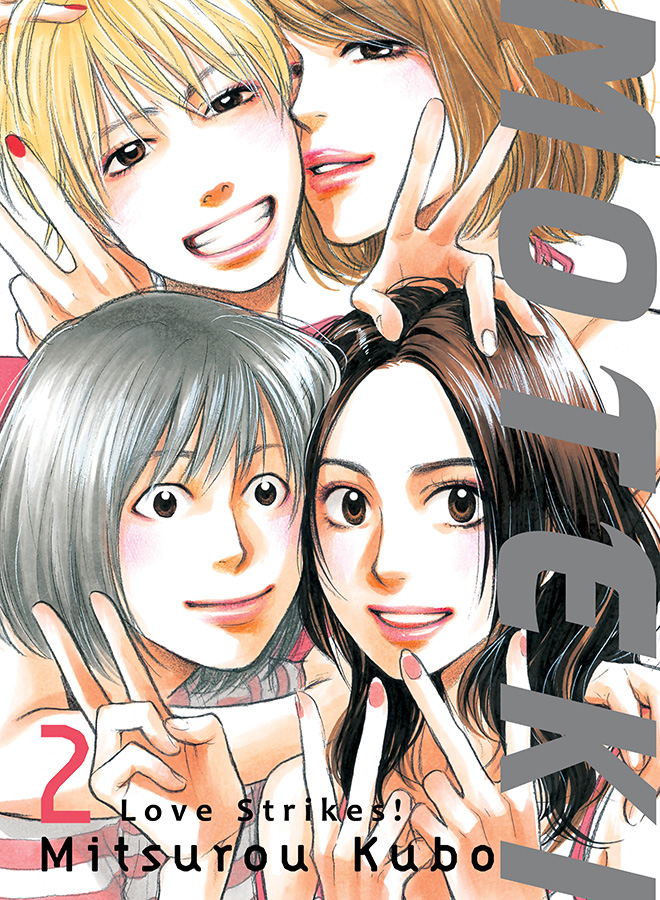 Sometimes I find myself diving back into many squirm-inducing holes into my career. After all, writing about bad video games, anime, music, and manga are just a way for a critic to be able to show that they don't like everything in this mildly green world of ours. As such, I hesitated to dive back into Mitsurou Kubo's Moteki, whose first volume made me wildly uncomfortable the more I dove into Yukiyo Fujimoto's world. Perhaps it was because it's a rather short series that made me decide to see what exactly happens in its second half. In a way, this critic is kind of glad that he did.

The second part of Moteki has Yukiyo once again in the middle of a world of women he either is in love with, has some feelings for, or is currently trying to avoid like the plague to make some sort of contact with. This time, the main focus is on Aki and Itsuka, two women who seem to have feelings for Yukiyo, but -- like our "protagonist" -- can't seem to showcase their true emotions. It's when Yukiyo is injured and forced back to the countryside when he finally realizes that he can't mope about and worry about his internal demons. But when a couple of old friends reenter his life, that mentality winds up being easier said than done.

This time around, I couldn't help but feel just a tad bit sympathetic for Yukiyo's plight. For much of his story, he's almost wrapped around the finger of every female friend that he comes in contact with. Sometimes their emotions wind up being legit, whereas other occasions have them just feeling sorry for the 30-something guy who hasn't experienced true love. Thankfully, a silver lining finally appears within Yukiyo's cloudy mentality, with a chance at happiness seemingly in his grasp.

And yet, it's watching Yukiyo jump from woman-to-woman once again that makes my sympathy seemingly vanish. Those true colors of his, which made rooting for him in the first volume almost impossible to do, bleed on through within his thought process and actions. While he does far less sleazy things here in the second volume of Moteki, bad mannerisms are still bad mannerisms. With that being said, it's nice seeing Yukiyo own up to his awful decisions towards the end, even if it does result in a somewhat intimate moment that feels like a true backstabbing moment for the beloved he may have left back in Tokyo.

However, I was very surprised with how well-written the character of Itsuka wound up being in this second half. Although she does make an early exit, her presence proved that through this ethically scummy world that Kubo had written, there was someone in it that tried to have a pure mentality throughout her contribution to the story. It's why I was genuinely surprised by how wonderful the bonus chapters at the end were, with Itsuka's perception being something far more relatable and likable than Yukiyo's ever was. (I'll even admit: I wouldn't mind seeing her story get flushed out more in the future, if an opportunity comes for Kubo to do so.)

But in the end, it's what the overall tale of Moteki delivers that matters most. Now that it's reached its conclusion, I'm sad to that that it wasn't all that great. The experience reading this manga made me realize that no matter how relatable a character may be, it's what they go through in the narrative that matters most. Even if it did close the book on Yukiyo's tale quite well, it doesn't excuse the more uncomfortable moments that Kubo's manga was chock full of.

Moteki may have picked itself up a bit more in its second half, but it doesn't excuse itself for the first half's mistakes. While Yukiyo comes out of his story as a somewhat better person, one cannot help but think his mentality still needs a good reality adjustment. Thankfully, with the series now at its end, we won't have to deal with more rough back-and-forths or horn-dogged internal monologues, now that Kubo has moved on with far better tales to spin. Although it ended on a higher note than it greatly deserved, Moteki is one series that should be rejected like a cringeworthy first date.