HomeVideo GamesGAME REVIEW | Trying to Remain a Right-Sider in "Chaos;Child"

GAME REVIEW | Trying to Remain a Right-Sider in "Chaos;Child" 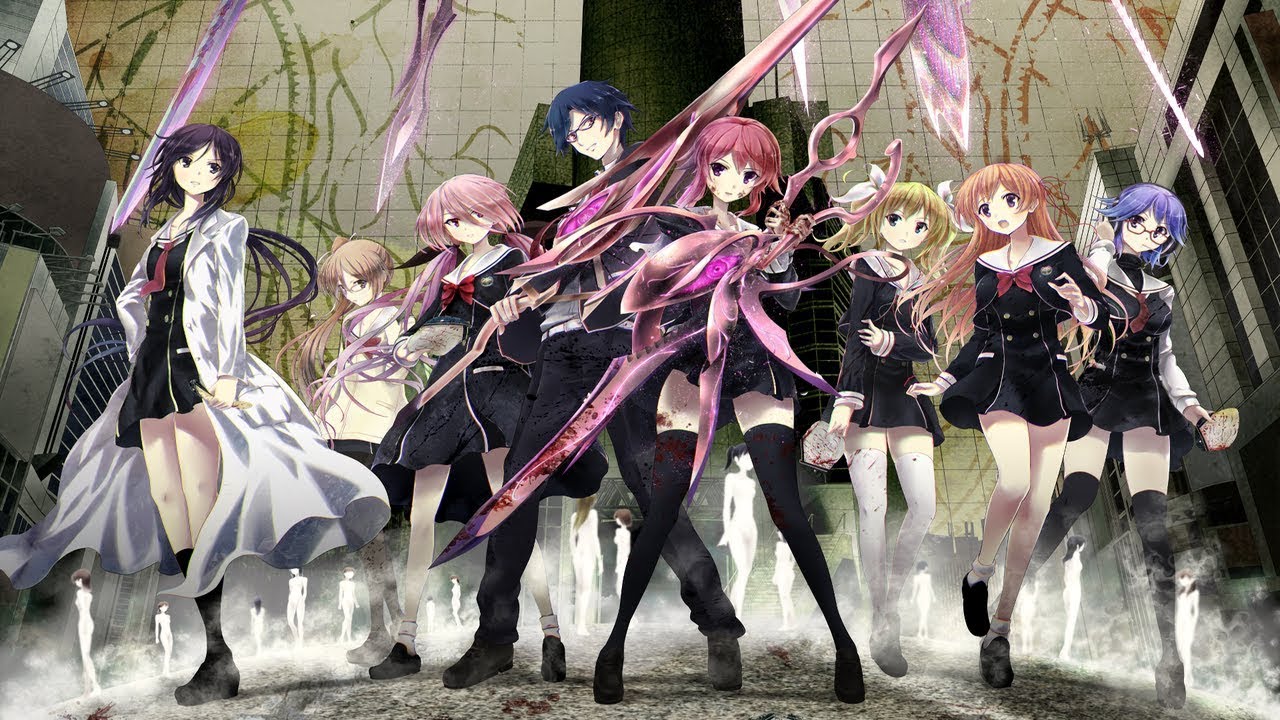 GAME REVIEW | Trying to Remain a Right-Sider in "Chaos;Child"

Chaos;Child is the sequel to Chaos;Head, but the first game in the series never released in the West in any official capacity. The only way to get that game's story is via a poorly executed anime that rushes through its plot because it's only about thirteen episodes long. Plus the fan-translation and legit picking up a copy of the game is difficult now, so neither solution is ideal at this moment. But while you don't need to have played the first game to enjoy its story, there are some things that would have made Chaos;Child easier to appreciate. It also doesn't help that the game is held back by its poorly handled localization.

Chaos;Child is about a young man named Takuru Miyashiro, who has an affinity with investigating things like urban legends or even things as grim as a series of brutal murders. He often does this with the aid of his childhood friend Serika Onoe. Of course, since he's now investigating this series of murders that follow a similar pattern to another series of Murders called the "New Generation Madness," it's only a matter of time before he gets in too deep, and people close to him start getting hurt. Even more bizarre is that he awakens to abilities that he didn't know that he had before. After this event, he struggles to determine what's reality and what's a delusion, and his life and relationships may not be what they seem. 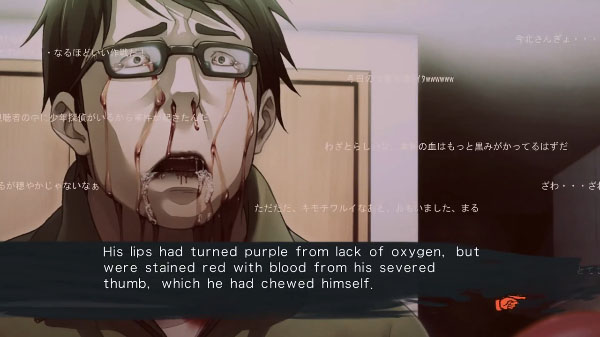 It's a fun story that will take about fifty to sixty hours to get through, but you'll first need to clear the common route, followed by the heroine routes, to open the true ending and lay bare what's really going on in this game. The setting for Chaos;Child takes place five years later after Chaos;Head, following an earthquake that left him and many other children orphaned. While you don't need to have played the original game to enjoy this, things like knowing the reasons for characters like Mio Kunosato being driven by revenge against an organization called the Committee of 300 won't really be revealed to you. It's things like that where the game expects you to have seen the story of the original Chaos;Head.

The game handles story branches in quite an unusual way, much like Steins;Gate's phone calls. You have Delusion Triggers and mapping triggers. Delusion Triggers give you the opportunity to view a delusion of Takuru's which can either be positive or negative. A positive delusion tends to either be goofy or even a bit lewd, but it never gets too gratuitous. Negative ones on the other hand usually have bad things happen. While these are in fact delusions of his, they often will set up the path for a story route in the second playthrough. The game will very much let you know when they happen, so if you are skipping previously read text, it will stop for these triggers and do a quick save. However, the mapping triggers will always affect routing, and are done to organize Takuru's thoughts on the murders. It's probably a good idea to make multiple save slots so you can just jump to a specific part of the game and get to the other routes with less skipping. 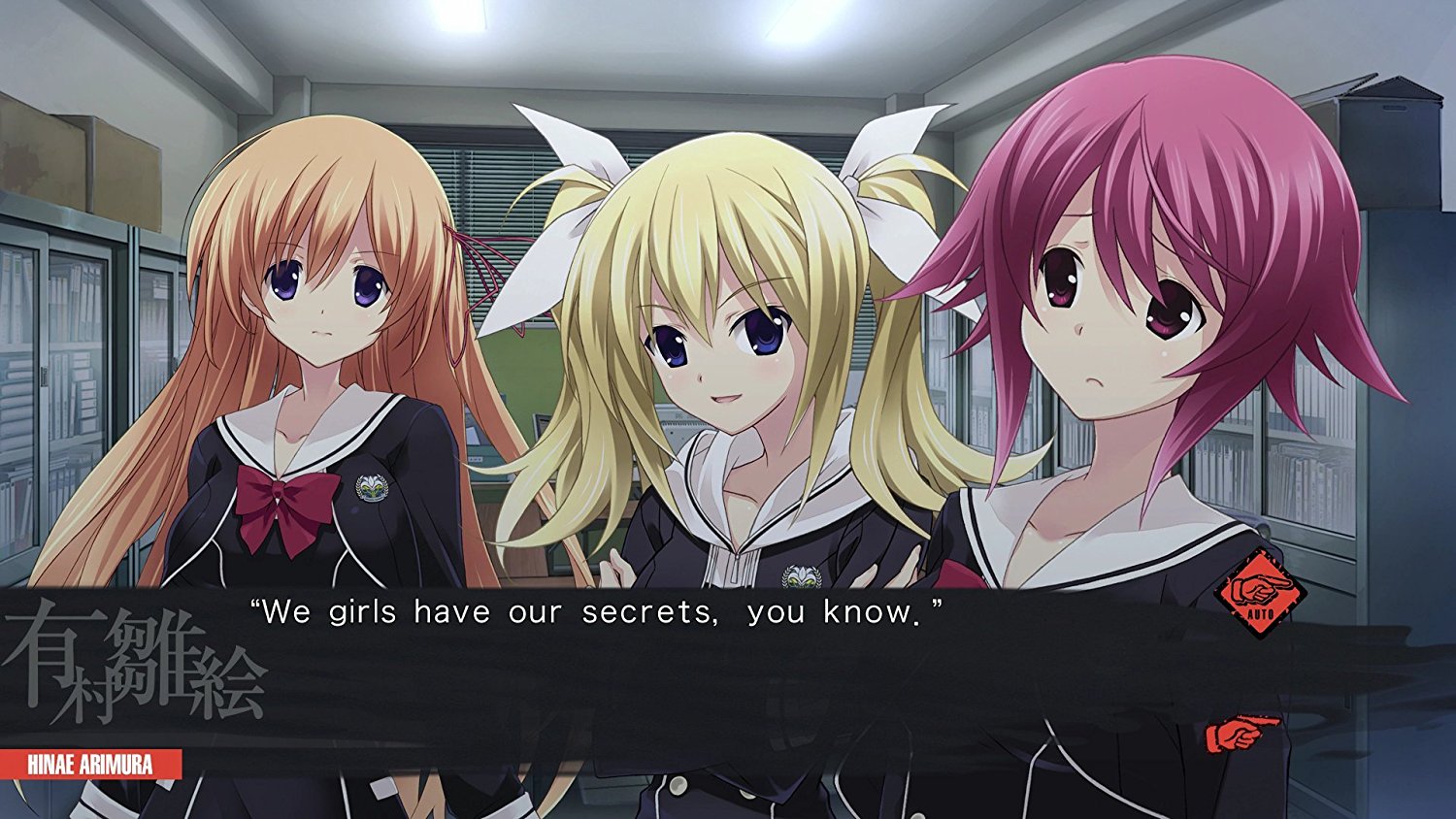 The game actually has a good localization as far as the translation itself goes, but it suffers a bit from the technical issues weighing it down. QA's involvement in weeding out typos or other errors must have been light, seeing only maybe a single pass, resulting in some horrible mistakes. Typos in a game with a lot of text is fine, as there are actually only a handful or typos or syntax errors like calling someone the wrong sex by referring to them as 'her'. Far more egregious are the many places in the game where there is missing and untranslated text. Things like untranslated credits screens, but even more to the point are the missing audio cues to activate the voice acting in a large number of scenes. The audio itself is intact, but it fails to play at large number of parts in the game. Thankfully the game has a log which lets you play audio back, but these oversights dampen one's enjoyment.

Currently, the company's response to this was a single patch that only fixed a tiny bit of what was wrong with the game. It's like fixing a big wound that needed to be disinfected, sutured, cleaned and wrapped in gauze, but they "solved" the issue via just putting a bandage on instead. And this was months ago back when it launched, and yet here we are months later, and there has been complete silence. It's really disheartening to see PQube and MAGES seemingly not caring about rectify this issue. I'd very much like to give Chaos;Child a higher grade, but in its current state, I can't. It should also be noted that like other MAGES visual novels, there is no cross-save feature between the PS4 and Vita versions. Hopefully the game will get fixed, and whomever is involved with working on the game will break their silence soon. If you are willing to put up with the missing audio, text, and the remaining typos, Chaos;Child is a great visual novel, but maybe waiting for a sale or a patch is a better option for you at this point. 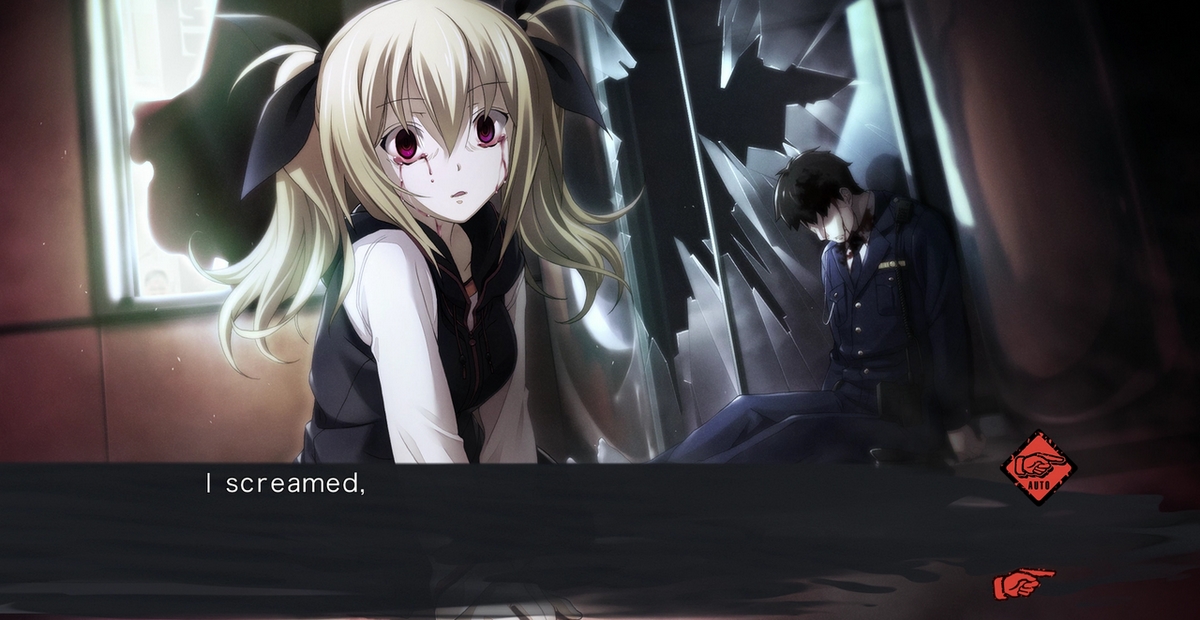 The Good: The actual story is pretty interesting.
The Bad: The poor quality of QA that went into the localization.
The Ugly: The fact it seems unlikely that the game's still remaining technical issues will get patched.

SUMMARY: Chaos;Child is a great visual novel whose only problems are the rushed localization and a few elements needing some understanding of Chaos;Head to fully appreciate.