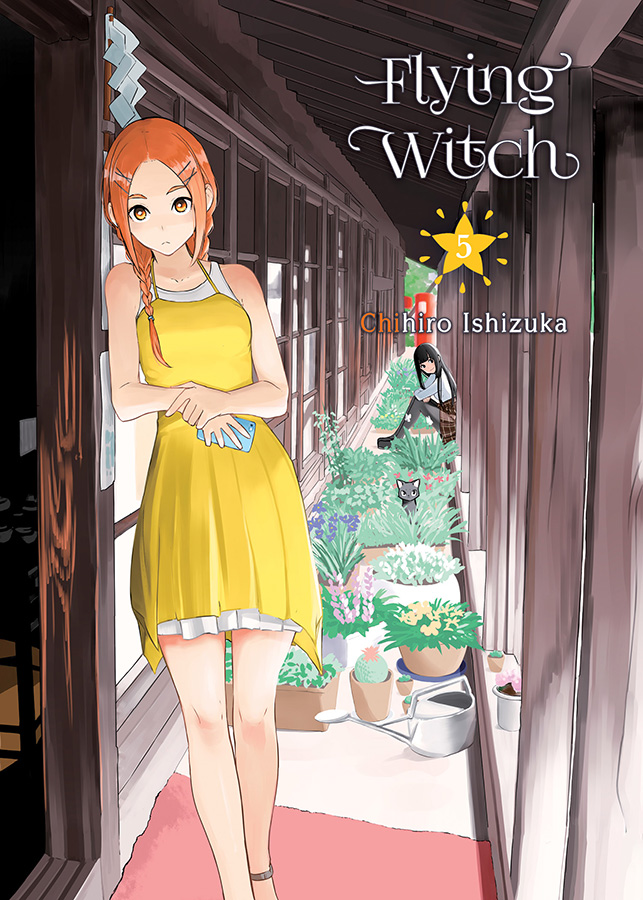 Every time a new volume of Flying Witch is released, it feels like you're being welcomed back into the most magical, gentle world imaginable. Chihiro Ishizuka's series has a knack of bringing together a mystical essence with a back country flare, as if the cast of Little Witch Academia found themselves in a small New Hampshire town instead of a majestic castle-like school. Now that the manga has gone past what we saw in J.C. Staff's brilliant anime adaptation, Flying Witch is now in the business of surprising everyone with what's in store. And when it comes to surprises, this series knows how to pull them off with the heartiest of laughs.

Volume Five has our characters growing in various ways, be it wiser, skill-wise, or -- in the case of one incident involving Chinatsu and one of her treasures -- physically. Makoto gets her first official job as a witch, involving her watching over a young boy who is not as normal as he seems. A fishing trip has Akane bragging about her most recent purchase, only for the results to not be what her seller claimed. There's even an old tiring gag that involves Kei getting a terrible case of the hiccups, with a solution that comes straight out of left field.

What Flying Witch does wonderfully is present the most spellbinding moments in even the most mundane of days and routines. The hiccup gag, which has been done to death in various anime and sitcoms, somehow gets a breath of new life when Kei's burden revolves around something more in the hocus-pocus realm, with a solution that will surely crack up any reader. An episode involving the family changing a paper screen door leads to some constant chuckles involving the familiar Chito and Makoto & Chinatsu's playful means. All of this is presented with a sort of warmth that only this series is able to deliver without fail.

Perhaps what makes this volume feel more special is how we see Chinatsu grow into her role as a witch-in-training. There's a childlike wonder that engulfs this manga, and Kei's little sister somehow is the embodiment of how we as readers are reacting to the new discoveries around them. Whether it's learning how to skip a stone or stumbling on a strange manta ray-like creature, her responses to these new things are filled with the sort of wow factor that any person new to the world of magic would emote. It's the end of the final chapter in this volume when that surprise reaches a beautiful realization, one that has the young girl achieving a goal she has worked hard towards to. Of course, it delivers some solid comedy in the process, staying much in the flow of what this series often offers us.

Every time I finish a volume of Flying Witch, it's as if the friends and place they reside in have to go away once more for the time being. But I know that when the time comes to visit them again, a feeling of joy will be rekindled. What Ishizuka achieves in each volume of Flying Witch is a gem all on its own, one that shines a glimmering light into an ordinary world in need of a bit of abnormality. Volume Five's magical quantity is neither too little nor too much; it's the right amount of wonderment that helps place a bright beacon on both the fantastical and the reality that it calmly enters.