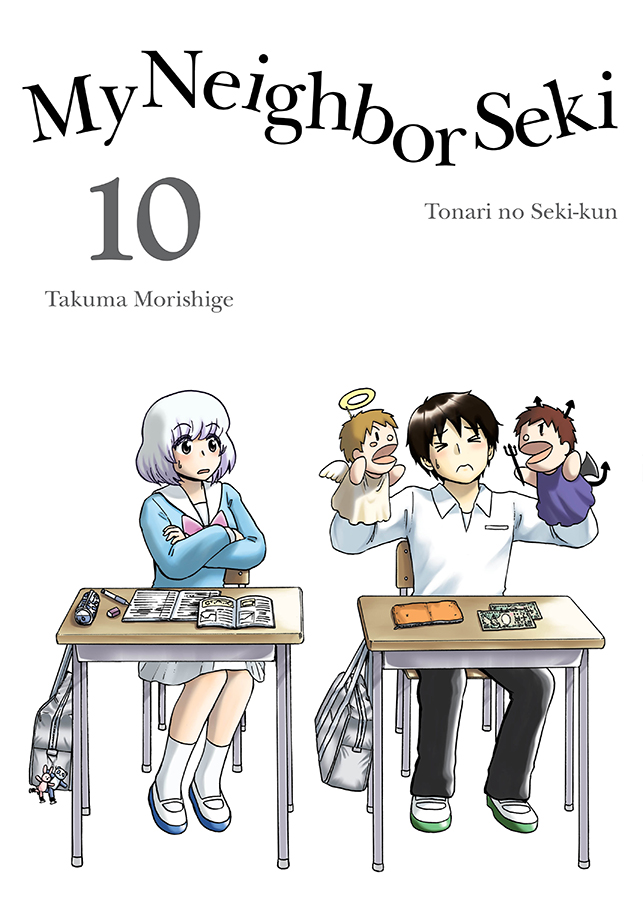 Back in 2014, I was introduced to an anime series called Tonari no Seki-kun. The episodes followed a usual plot-line involving student Rumi witnessing her classmate Seki goofing off in the most unique ways as the teacher was going on with their lesson. What made it a joy was the fact that Rumi was almost always the only person noticing Seki do this sort of schtick, as he was able to cover up his tracks from other peering eyes. (The fact that Rumi gets in more trouble over her loud reactions to his antics made it even funnier.) So imagine my surprise that the original manga by Takuma Morishige had been licensed a couple years back under the translated title My Neighbor Seki.

As my knowledge of the manga is just starting out with the recently released tenth volume, it should be noted that there isn't a legit story that's going on throughout its run. While there are students that are mistaking Rumi's peering towards Seki as one out of love & adoration, nothing has yet to be hinted that Morishige is going that route. (In fact, no one knows how the manga will end, as it is on hiatus as of this review while the author works on his other series Stardust Junction.) Nevertheless, you can dive into My Neighbor Seki at any point, although I still recommend you try to watch the anime for its sheer entertainment value.

In its tenth volume, Rumi once again watches the antics of Seki go into full-blown hyperdrive. Crafting UFOs with crop circle accessories, testing out a virtual reality system, and fixing up his desk into an awe-inspiring work of art are what Rumi keeps her eye on when she should also be studying. Troublemaker Uzawa puts his nose into Seki's business when working as a group, resulting in the master of destroying to make the master of killing time screw up his model car building in a beautiful display of Murphy's Law. The shogi pieces appear to present a peaceful town transforming into a rivalry between villagers, with Rumi attempting to keep peace by acting as the god against Seki's crazed imagination.

Perhaps the highlight of the volume involves the classroom participating in a kaiju-themed cafe for the school festival. I don't wanna spoil the bit too much, but with Seki's handy skills in full swing for all to see, he goes one and beyond his usual motif. (Yes, it does involve the Robot Family in some way.) The punchline that presents itself is one that you won't see coming, despite fellow classmate Yuu thinking that what occurs fits into the lore of the giant monster Seki built.

One can understand why Morishige has taken a break from My Neighbor Seki after this volume released. The mindset to read something that goes further beyond most people's imagination alone takes a whole lot out of you, never mind actually creating the concepts for each chapter. Nevertheless, for Morishige to be able to come up with fresh ideas for 129 chapters for such a small idea is deserving of some praise. Its tenth volume is wackier than anything I've seen showcased in the anime adaptation, making me sort of wish that Shin-Ei Animation would give it another season. Until the day he returns for another round of goofing off, consider the tenth volume of My Neighbor Seki a wonderfully humorous way to leave us waiting for more.

GAME REVIEW | Diving Into A Bullet...

Third Round of Japanese Guests Ann...