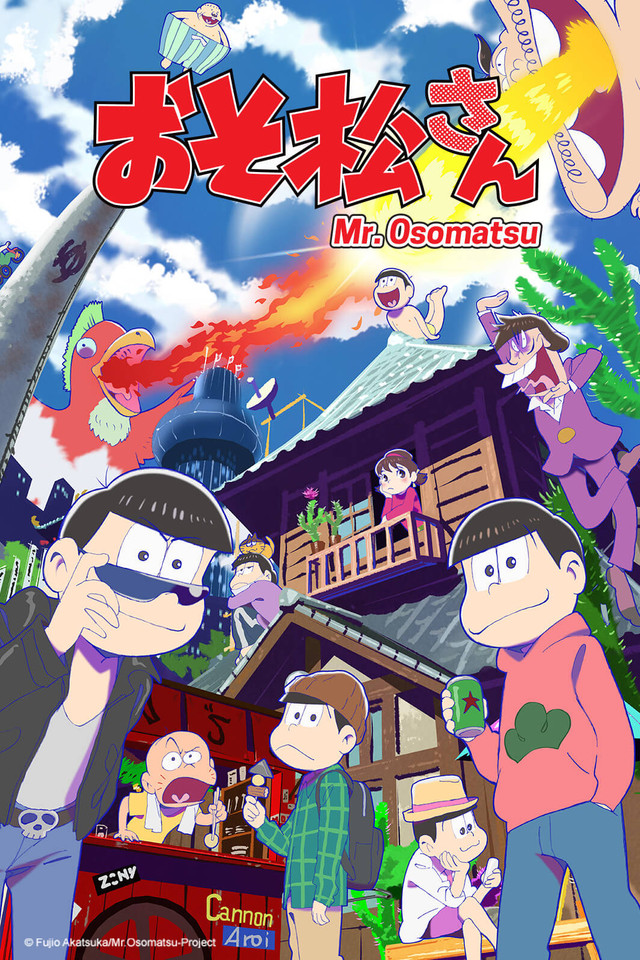 Mr. Osomatsu is one pickle of anime to review. In order to truly give it a proper rating, one must be knowledgeable of Fujio Akatsuka's original manga Osomatsu-kun, have seen at least a few episodes of either the '60s or '80s anime incarnation, and needs to be able to give an honest grade while avoiding any mention of the pulled pilot episode that was utterly brilliant from start-to-finish. So far I'm batting zero for three here, as it's almost impossible to give a fair rating without factoring in the source material (which I've never read or watched) and the hilarious first episode (which I made mention of in my Podcast a few weeks back).

There is undoubtedly an importance to the return of the Matsuno sextuplets, as the anime's release has been done so in order to celebrate what would've been Akatsuka's 80th birthday. (He died of pneumonia in 2008, after suffering from a cerebral hemorrhage six years prior that put him in a near-vegetative state.) Osomatsu-kun has its share of importance in Japan, with the manga being hugely popular during its original run and spawning the original anime series, films, and even a few video games. 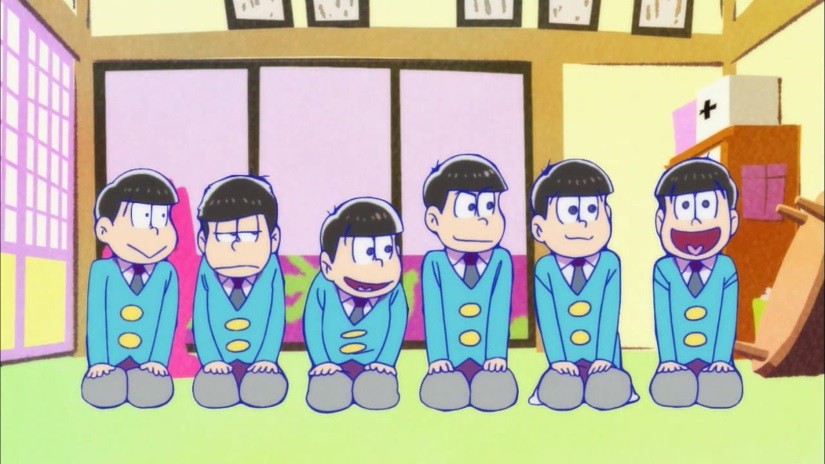 Here in America, though, it's safe to bet that no one has ever heard of Osomatsu-kun. Hell, even I've never heard of this series, and I'm usually on the ball when it comes to some of the more classic manga and comics. Now after watching the first half of the Mr. Osomatsu, which follows the Matsuno sextuplets during adulthood, I can understand why a show like this would never fly around these parts. To put it as bluntly as possible: Mr. Osomatsu is a very, very Japanese show.

Normally most anime since the beginning had something that could draw in those that lived outside of Japan. Astro Boy had an awesome robot kid who saved the Earth on a weekly basis; Lupin III took on some pretty crazy capers; Doraemon had snazzy inventions that worked for and against the title character and his human pal Nobita; and Speed Racer featured some cool racers and plot lines so that got kids to sit their butts down each week to tune in to see the Mach 5 in action. 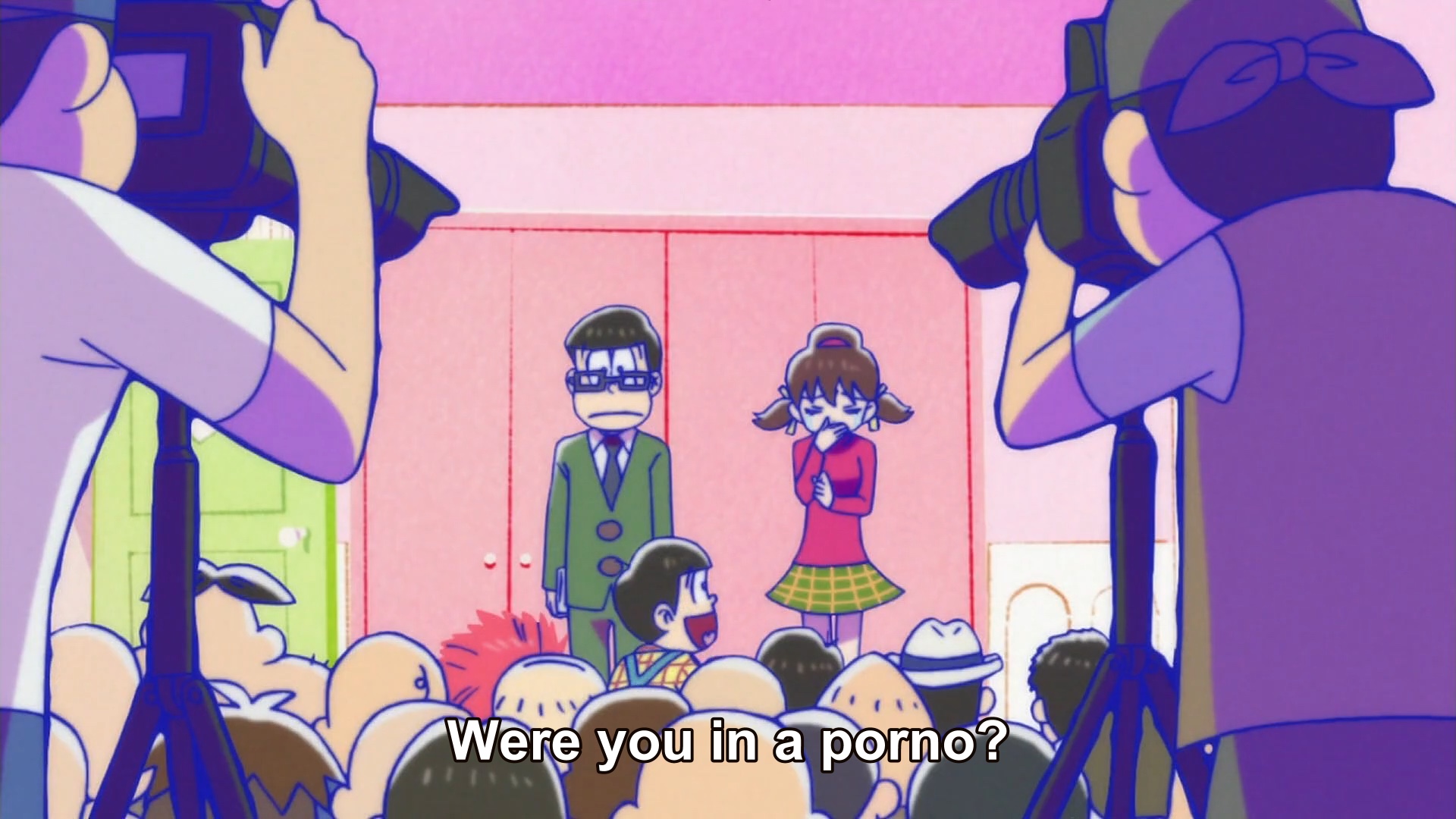 Mr. Osomatsu, on the other hand, has maybe one -- sometimes two -- jokes that branch over to the Western part of the world. While I'm just judging this franchise solely by this adaptation I can just about guess that the original manga is very much like this series. (They're honoring the late Akatsuka, after all, so it'd be like spitting on his grave if they changed the format of his creation.) When a good laugh comes our way, it's incredibly funny, with the majority of the Christmas episode being a great example of when Mr. Osomatsu hits a huge comedic stride. Other times you'll be wishing for the days of when fansubs would explain gags that would go over the heads of most Americans.

It sounds unfair to be judging a Japanese show for being unappealing to an American audience. However when a series is expected to be brought outside its birthplace and into a more foreign ground one must think that the folks at Studio Pierrot and the series' screenwriter Shu Matsubara could've maybe tossed a few more bones to those who don't understand this sort of Showa-era comedy that Mr. Osomatsu emulates. Alas, this is one series that is depending on its audience to know exactly what it's joking about every step of the way, and because of that an enormous chunk of the gags thrown at the foreign viewer gets lost in translation. 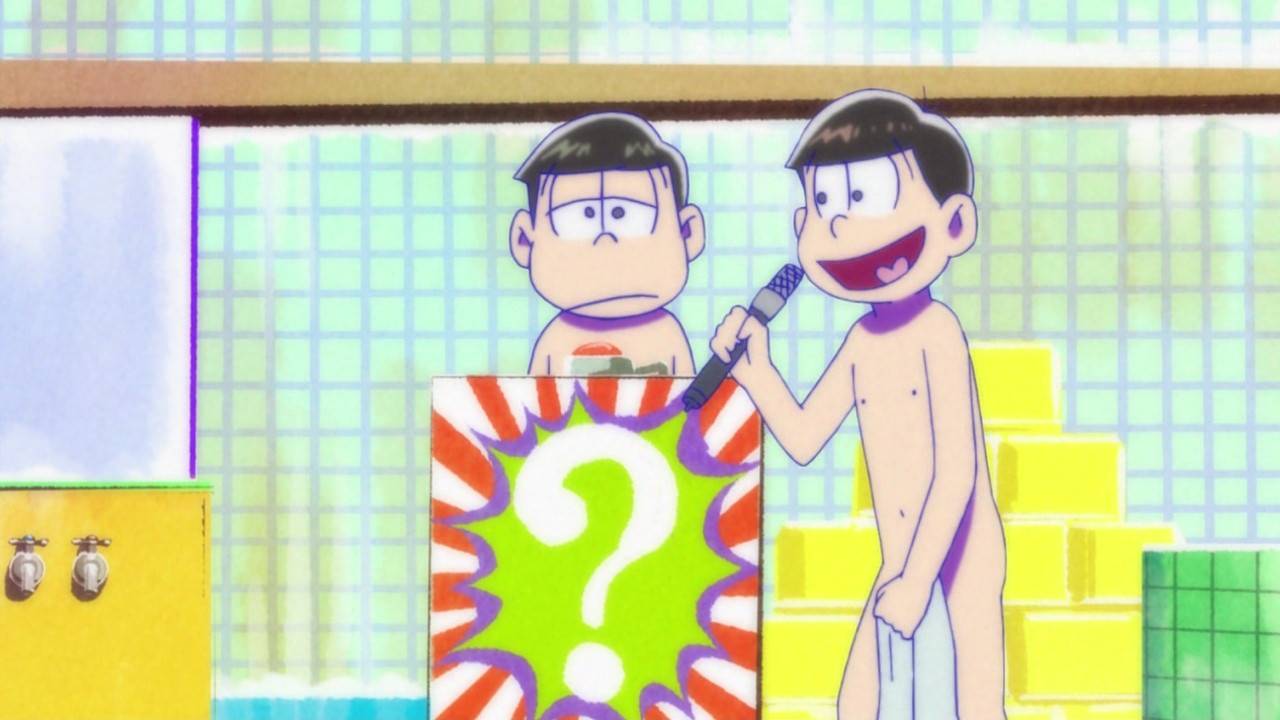 Animation-wise this anime likes to jump between the ranges of pretty good to pretty crappy. Considering that it's director Yoichi Fujita at the helm, who also did the fantastically hilarious Gintama for a few seasons, it's kinda disappointing to see the quality of the show inflate and deflate even during an episode's duration. Again, perhaps it's to keep to the Akatsuka's style, but after awhile it gets really distracting.

One of the brighter spots of the show is its voice cast, with A-list seiyuu Takahiro Sakurai (Osomatsu), Yuichi Nakamura (Karamatsu), Hiroshi Kamiya (Choromatsu), Jun Fukuyama (Ichimatsu), Daisuke Ono (Jyushimatsu), and Miyu Irino (Todomatsu) tackling on the roles of the Matsuno sextuplets. Each showcase a good range of personality that help to differentiate which bro is which, with Fukuyama's Ichimatsu's pessimistic attitude that makes him look like a manic depressed Jon Arbuckle and Ono's Jyushimatsu acting wild, crazy, and carefree. (Methinks he's on the Spectrum, but that's just my opinion.) The one that steals the spotlight each time is the buck-toothed and France-loving Iyami, whose "Sheeh!" catchphrase hits high volumes thanks to the highly-energized Kenichi Suzumura. 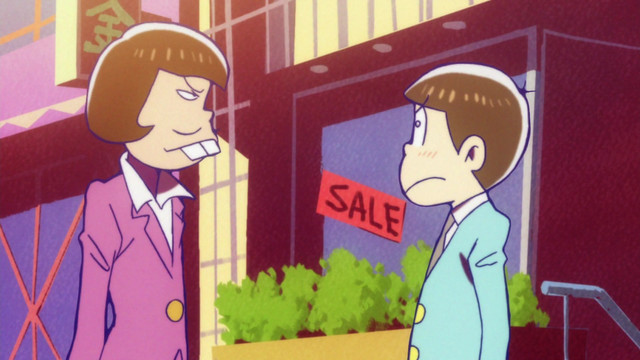 The other shiny area of Mr. Osomatsu is its opening theme "Hanamaru Pippi wa Yoi Ko dake", performed by the female idol troupe Anime Katteni Ouen Project (or AouP for short). It's catchy and fun to hum to, with the crazy visuals of the sextuplets and their colleagues goofing off to the extreme matching well with the melody. End theme "Six Same Faces," performed by the voice cast, sorta suffers a similar fate to the show's humor, and while seeing the characters being created with food is very cool it makes me wish I knew what it was they were joking about in-between the verses.

I guess Mr. Osomatsu is worth watching on these shores if one wants a more historical aspect on the importance of these characters, as they are seen in some form in the same way as Lupin, Doraemon, and Goku. You'll be rewarded here and there with a joke you'll be able to understand, but you'll probably walk away from each episode more clueless about what you just watched. Everyone else looking for some good Japanese-styled anime comedy would do better to stick with something like Gugure! Kokkuri-san and Monthly Girls' Nozaki-kun, as those shows take into consideration the Western audiences it may have. In short: you'll have to be either be very familiar with pure Japanese humor to enjoy the majority of Mr. Osomatsu. If you're not, I wouldn't bother giving it your time.

Mr. Osomatsu can be viewed on Crunchyroll. Episodes 1-12 were observed for this review.

No Borders No Race: The Top Twenty...